Now that Little Miss E is six, she has been leaving behind the picture books of her pre-school years in favour of first chapter books.

I’ve loved re-discovering some of my favourite childhood classics with her – The Worst Witch series by Jill Murphy; the Faraway Tree collection by Enid Blyton; Mrs Peppperpot by Alf Proysen and Milly Molly Mandy by Joyce Lankester Brisley. As a family, we’re slowly working our way through the Roald Dahl collection and no surprises that my children love such classics as The Twits and George’s Marvellous Medicine as much as Cardiff Daddy and I did when we were both children.

I spend a lot of time reading to her, but often she finds a quiet corner and reads to herself. She’s a very competent reader and a few times I’ve asked her if she’d mind leaving certain books so that I can share such stories with her.

As much as she has a taste for the classics, her current obsession is the Rainbow Magic books. After borrowing a couple from the library, she had a box set of 42 for her birthday back in December, we bought eight in a charity shop for 20p each and another 10 via a local Facebook selling group, £2 for the lot. She’s read them all, most of them twice, and is constantly telling me which ones she’d like to add to her collection.

I love her passion for reading, I really do. As someone who works with words for a living, and has read with all three of my children since the day they were born, it makes me so proud. But, for reasons that will become clear below, I’m just not quite so enthusiastic about these particular books as she is. I don’t want to discourage her from reading or stimulating her imagination with what she sees as exciting stories, so I keep quiet.

Other mum friends tell me they feel the same about the Rainbow Magic books. So for them, and anyone else with a child obsessed with all things fairy, here are 10 thoughts you’ve probably had.

Sounds familiar? Let me know if you relate, or anything you’d add to the list, either in the comments section below, on the Cardiff Mummy Says Facebook page or by tweeting me on @cardiffmummy 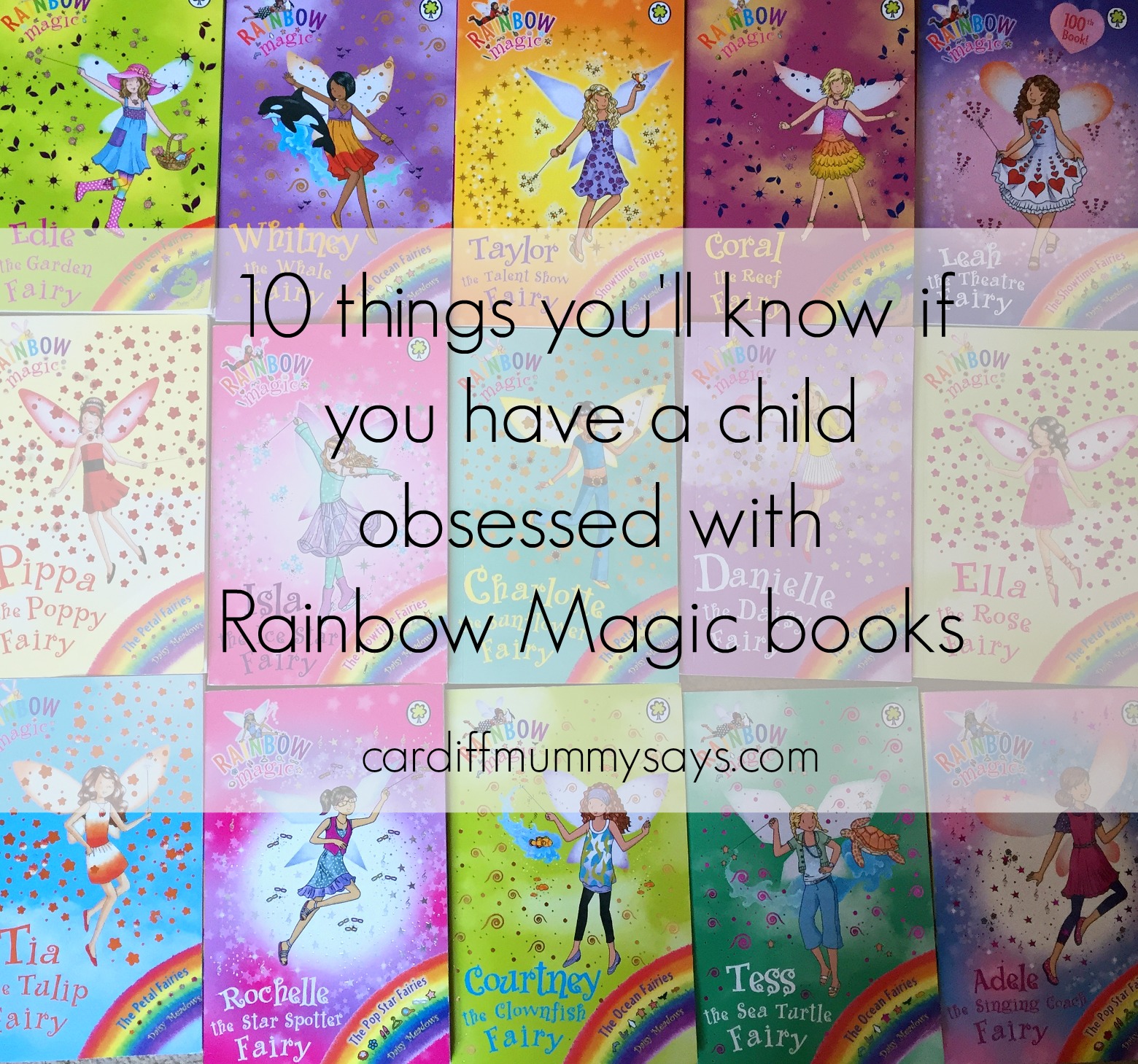 1. You’ve wondered whether the author’s name is actually Daisy Meadows. In fact, you’ve probably Googled it to find out. As much as you figured it was a made up name, [spoiler alert] you’re really disappointed to discover Daisy Meadows is actually a collective of people churning out as many of these stories as they can.

2. You’ve also Googled to see how many books there are in the series. Yep, there really are around 200.

3. You’ve excitedly searched to find a fairy with the same name as your daughter…. or she’s been left massively disappointed to discover there’s no fairy as yet with her name.

5. You’ve tried to persuade your child not to buy one Rainbow Magic book they’ve spotted in the shop for £6, but rather to let you order a box set online where you can get ten for a tenner.

6. You’ve wondered why your child doesn’t realise the plot for all these books is basically the same. Jack Frost steals the fairies’ jewels or their magic or whatever and Kirsty and Rachel come and save the day. Come on Jack Frost, get some new moves! It’s the same thing every single time.

7. You’ve wondered just how much spare time Rachel and Kirsty actually have. Two hundred fairy adventures?! Do these girls never go to school? Do they never pester their parents to let them watch TV?

8. You’ve wondered if there are any boy fairies… and if not, how do these fairies manage to repopulate?!

9. You’ve breathed a sigh of relief when your child begins to read by themselves and you no longer have to spend bedtime after bedtime reading about fairies.

10. You’ve wondered whether you can make your own fortune by coming up with an idea for a similar series of books.

Sound familiar? Let me know if you relate, or anything you’d add to the list, either in the comments section below, on the Cardiff Mummy Says Facebook page or by tweeting me on @cardiffmummy