Is a trip to the cinema on the cards for your family this October half term? There’s plenty of choice for young children, with Shaun the Sheep returning to the big screen in alien adventure Farmageddon; an epic quest to return a Yeti to the Himalayan mountains in Abominable; dark adventures as Angelina Jolie returns as Maleficent: Mistress of Evil; plus the first animated film of The Addams Family. Older children and teenagers may enjoy the Downtown Abbey film, still going strong in cinemas after a month; Judy, which follows Wizard of Oz star Judy Garland 30 years after the film as she arrives in London for a sell-out run of shows; and The Peanut Butter Falcon in which a boy runs away from his care home to make his dream of becoming a wrestler come true.

Also don’t forget that lots of cinemas offer value family screenings of slightly older films at weekends and every day during the school holidays where tickets cost around £2.50 per person. Check out Odeon Cardiff Bay for Odeon Kids screenings; Mini Mornings at Vue Cardiff; and Movies for Juniors at Cineworld Cardiff.

Half term for Cardiff schools is the week of 28 October. If your half term begins the week of 21 October please note that some of these films are not released until 25 October.

Are you planning on seeing any of these films? Do let me know in the comments below, on the Cardiff Mummy Says Facebook page or you can tweet me on @cardiffmummy 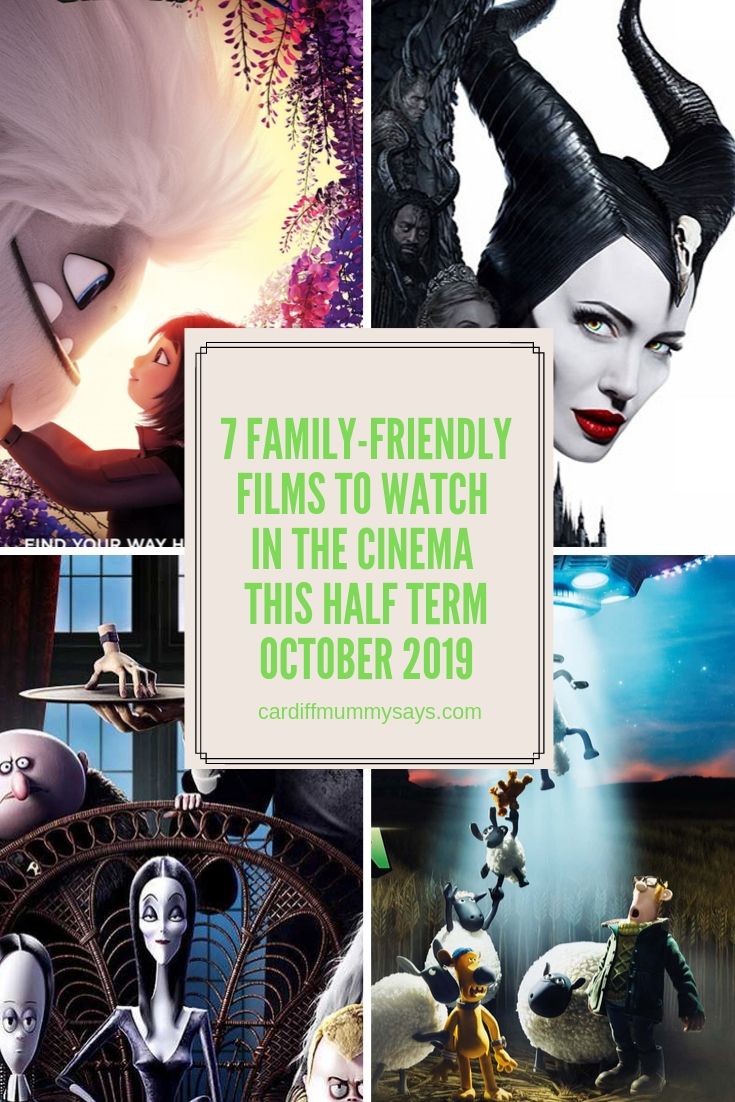 The Crawley family’s first venture on the big screen is set in 1927, two years after we last saw them on New Year’s Eve 1925 in the 2015 TV Christmas special. There’s much excitement at Downton Abbey with an impending visit from King George V and Queen Mary. However trouble soon arises when Mrs Patmore, Daisy and the rest of the servants learn that the king and queen travel with their own chefs and attendants, setting the stage for an impromptu scheme and other shenanigans.

Thirty years after global stardom in The Wizard Of Oz, Judy Garland (Renee Zellweger) arrives in late 1960s London to perform in a sell-out run at The Talk of the Town. As she prepares for the show, battles with management, charms musicians, and reminisces with friends and adoring fans, in her private life she also embarks on a romance with Micky Deans, soon to be her fifth husband. Yet Judy is fragile. After working for 45 of her 47 years, she is exhausted; haunted by memories of a childhood lost to Hollywood; and gripped by a desire to be back home with her children.

An epic adventure that journeys from the streets of Shanghai to the breathtaking Himalayan snowscapes 2,000 miles away as teenager Yi finds a Yeti on her roof and tries to reunite him with his family. As she and her friends embark on the epic quest, they must outwit Burnish (Eddie Izzard), a wealthy man intent on capturing a Yeti, and zoologist Dr Zara (Sarah Paulson) to help Everest get home.

Shaun the Sheep: Farmageddon (U)

Shaun the Sheep returns to the big screen in this Aardman animation, which sees the arrival of a mystery visitor from far across the galaxy, as adorable alien LU-LA crash-lands near Mossy Bottom Farm. Shaun soon sees an opportunity for alien-powered fun and adventure as he sets off on a mission to shepherd LU-LA home, while a dangerous organisation seeks to capture the intergalactic visitor. Her magical alien powers, irrepressible mischief and galactic sized burps soon have the flock enchanted. Can Shaun and friends avert Farmageddon on Mossy Bottom Farm before it’s too late?

Angelina Jolie and Elle Fanning return in the sequel to 2014’s Maleficent, in this dark fantasy adventure. The relationship between the two has flourished, despite being born of heartbreak and revenge – until Maleficent’s peaceful life as the protector of the Moors takes an unexpected turn when Aurora accepts Prince Phillip’s proposal of marriage. The impending union is cause for celebration in the kingdom of Ulstead and the neighbouring Moors, uniting the two worlds. However Queen Ingrith is secretly planning to use the wedding to divide humans and fairies forever. With Maleficent and Aurora finding themselves on opposite sides of an impending war, the two question whether they can truly be a family.

The Peanut Butter Falcon (12A)

Shia LaBeouf stars as Tyler, a small-time outlaw turned coach who forms an unlikely alliance with Zak (Zack Gottsagen), a young man with Down Syndrome on the run from his nursing home and with dreams of becoming a professional wrestler. This Mark Twain-esque film is described by Empire Online as “a lovingly performed ode to friendship that never once feels patronising or over-performed”.

The first animated comedy about the kooky family arrives just in time for Halloween, with Oscar Isaac and Charlize Theron leading the spook-tacular cast as Gomez and Morticia Addams. As the mysterious family prepare for a visit from even creepier relatives, trouble arises when shady TV personality Margaux Needler realises that the Addams’ eerie hilltop mansion is standing in the way of her dream to sell all the houses in the neighbourhood.