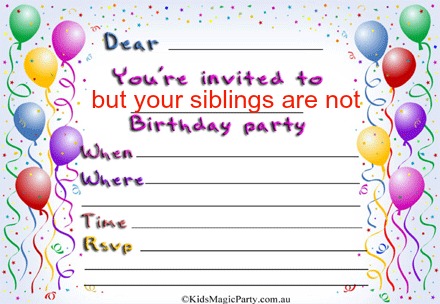 A couple of weekends ago, Little Miss E went to a birthday party of one of the children in her class at school.

Her brother, Little Man O, was so upset that he wasn’t going that he cried full-on tears. He’d seemingly forgotten that a couple of weeks previously, he had been to a birthday party of one his pre-school friends, and Miss E had been the one upset at not being invited.

It was the same last week when Little Man went on a trip to Barry Island with his cylch meithrin (Welsh playgroup), accompanied by me and Baby Boy I. Little Miss E was upset because she had to go to school instead. Next week, he will be the disappointed one when she goes off on her end-of-term trip to the park with Rainbows, and he doesn’t.

I hope that doesn’t make them sound spoiled. They’re certainly not! It’s just that with the three of them being so close in age – 21 months between Miss E and Little Man, and then another 2.5 years between him and Baby I – they have spent so much of their lives so far together doing the same things, it’s understandably a big adjustment for them to suddenly be doing things separately.

Until Little Miss E started full-time school last September, the three of them went to the same pre-school classes/soft plays/parks/play-dates – and birthday parties – together. Now, with Little Miss E nearing the end of her reception year at school, and Little Man O well into his pre-school days, the separate invites are becoming more common.

I’m not for a minute suggesting that the children inviting one of my kids to their parties should be inviting their siblings too. That’s just ridiculous. If they had to do that for all the guests, there could end up being 60+ children in the room. Not to mention the fact that often the birthday child doesn’t know the siblings in any case.

I think it’s good for my children to do separate things. Having the three of them in just over four years, I’m conscious that they have had limited opportunity to do things on their own. I want them to make their own friends and have the confidence to go to events on their own without the security of their siblings standing next to them.

If I know Cardiff Daddy is available to split childcare resources, then I love taking one of them to a party on their own. Sometimes, only one of us is about, so I’ll either check with the party host whether there is room for siblings, or ask if I can pay for them myself. It doesn’t always work out though and sometimes we end up missing out. Birthday party politics is a whole other post though.

I think it’s a good lesson in life to learn that sometimes other people get to do fun things that we don’t. I also want them to know that when it is them doing the fun thing, they need to be mindful of the feelings of those missing out because they know how it feels.

It’s also good for the child not going to the party to have quality time with the other parent. Although again, with three children that’s not always so easy.

I’m interested to see how other parents manage disappointment. A small part of me wants to console the uninvited child with a treat to make up for them missing out – but in the long-run, that’s not going to do anyone any favours. Sometimes we need to accept that we have to miss out.

I’ve talked a lot to my mum friends about this, and my children are certainly not the only ones to get upset when one gets to do something and the others don’t.

One of my friends, whose children are older than mine, tells me that hers still get upset now. However, there have been instances where one child has been invited to a party with the host parent saying to bring the other one along too – and my friend has declined the sibling’s invite saying she wants her children to get the chance to do things on their own, without their sibling tagging along. Especially now they are getting older.

I love that my children are close to each other as friends as well as in age, but I also love to see them growing in confidence and making their own way in life. No one likes being left out, but I think it’s an important lesson to learn as a child, rather than suddenly getting a shock when you get older and not knowing how to deal with it.

We’re still very early on in our school journey and so I’m sure there will be more instances of one child getting to do something, when the other doesn’t. I hope I’m handling it correctly. I’d love to know what other parents do in this situation.

Do let me know in the comments section below, on the Cardiff Mummy Says Facebook page or by tweeting me @cardiffmummy

If you live in or around Cardiff, you might like this article on 14 ideas for children’s birthday parties – with some great discounts for Cardiff Mummy Says readers.