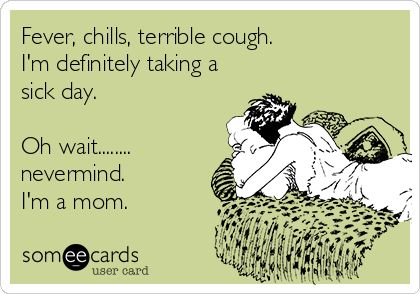 I’m feeling a bit sorry for myself today. I’m completely full up with a cold, my eyes and nose are streaming, I have a sore throat and a pounding headache that won’t shift.

But that’s just not an option for me because I have three children to look after full-time – and we all know you can’t call in sick when you’re a mum (or, let’s not be sexist, dads who are the primary carer too).

And so, I took a couple of paracetamol and added a good dose of Echinacea to my cold-busting apple, pear, carrot and ginger smoothie, and did my best to get three children ready so we could get Little Miss E, my 5¾ -year-old daughter, to school. It was a struggle and I was probably operating at about half my usual speed, but we just about made it on time.

I contemplated coming straight back home and having a quiet day in the house with my two boys, Little Man O, who has just turned four, and Baby Boy I, now 18 months. But I figured going to their usual gymnastics class would be way easier than having two energetic boys going stir crazy at home. Sometimes it’s easier to just keep on going and distract yourself from feeling crap. I made sure to keep my distance from everyone else for fear of passing it on – although as I discovered when we arrived back at school for Little Man’s afternoon pre-school nursery session, it seems bugs are everywhere at the moment anyway, children and mums alike. One mum of four told me she’d just recovered from flu and now has tonsillitis. Another is very heavily pregnant with her second child and seems to have similar to what I have.  Although at least I can take something for my symptoms; it’s so tough being poorly when not only are you pregnant but you also have another child/children to look after.

I guess it could be a lot worse though. I remember around three years ago having flu. Now flu is one of those words that people bandy about to describe even the slightest sniffle, and it drives me mad. Full-on flu is horrendous. I went from being cold and shivery one moment to burning up and shivery the next. Every muscle ached like I had never ached before. My nose and eyes streamed continually and I could barely keep my eyes open.

Except I had to, because I had a toddler and a baby to look after. Cardiff Daddy managed to wangle one day working from home to take the pressure off me, and the other days he made everyone lunch before leaving the house for the day and kept on top of the housework in the evenings, but other than that, it was one of my most difficult weeks of parenting. It left me wiped out for about three weeks. I’ve had the flu injection every year since.

On the plus side, once the worst few days had passed, I was fully mobile. I’ve had several friends who have broken or sprained a limb and been in plaster or bandaged up for several weeks or even months. It’s not so bad if you have family on your doorstep who can help out, or even friends who can help with the school run or taking your children off your hands for the odd hour so you can rest. As one of my friends who sprained her ankle and couldn’t walk on it for about a month told me, you have to make sure to ask for help.

Because we mums are the worst at feeling we have to do everything and stay in control. And so, when Cardiff Daddy asked me what he could do when he got home from work (late) tonight, I gave him a big list of things that would make my life easier. I sat down for half an hour, had a burst of energy and wrote this (because you can’t call in sick when you’re self-employed either). But now I’m off to bed. Because I feel like crap and I need all the energy I can get for tomorrow. Wish me luck!

I’m sure lots of you reading this can relate. Do come have a moan on my Cardiff Mummy Says Facebook page, or in the comments below, or you can tweet me on @cardiffmummy