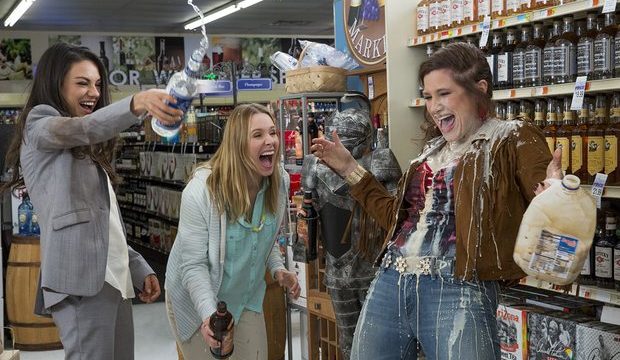 I genuinely can’t remember the last time I went to see a grown-up film in the cinema. It was definitely before I got pregnant with my third child – and he’s nearly two and a half now.

But last night, I was invited to see Bad Moms at the Odeon cinema in Cardiff Bay as part of my role as blogger ambassador at The Red Dragon Centre. I went with three other local mummy bloggers, Kerry from Kerry Louise Norris blog, Emily from Twin Mummy and Daddy and Alina from We Made This Life.

The reviews of the film hadn’t been too favourable – “silly and inconsequential” said Empire online; “reduced expectations will help,” warned The Guardian, giving it just two stars.

Well, what would the stuffy newspaper critics know?

Us four mums absolutely loved it. We laughed, we cried, we related to it. And I’ve got no hesitations in recommending it to you all.

The film opens with Amy Mitchell (Mila Kunis) trying to juggle getting everyone up and out of the house for the school run, helping with her children’s homework projects, the pressures of working in a job with a nightmare boss and clueless younger colleagues, getting back to school for pick up and ferrying her kids to various after school activities, cooking dinner for the family, attending PTA meetings….

The never-ending pressure to be the perfect mum who successfully juggles it all is something a lot of us mums know all too well.

As Amy says, “At least once a day I feel like the worst mom in the world. And cry into my car.” Don’t we all have those moments?!

And then she discovers her husband is having an online affair – and enough is enough.

When the bullying perfect-mum-chair-of-the-PTA Gwendolyn (Christina Applegate) issues a list of ridiculous demands at an emergency meeting to discuss the school bake sale – “No BPA, no MSG, no BHA, no BHT, no sesame, no soy and, of course, no nuts or eggs or milk or butter or salt or sugar or wheat.” – she snaps. “No,” says Amy. “I’m so tired of trying to be this perfect mom. I’m done.”

Striking up an unlikely friendship with Carla the alcohol-loving, sex-loving single mum, played hilariously by Kathryn Hahn, and Kiki (Kristen Bell), the downtrodden mum-of-four who won’t stand up to her husband, the three get ridiculously drunk and decide they’re done with unrealistic perfect parenting and need to embrace their inner Bad Moms. 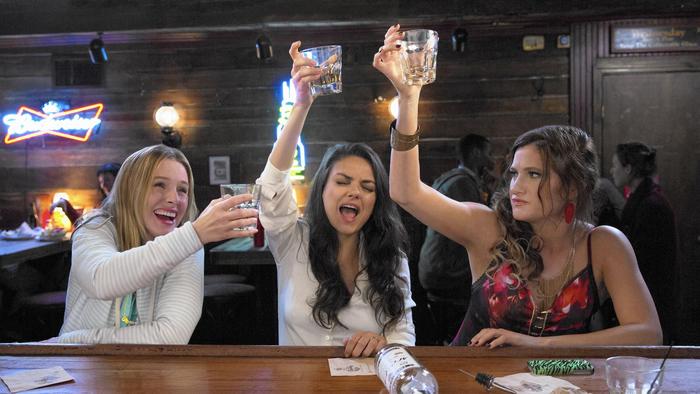 “We’re killing ourselves trying to be perfect and it’s making us insane,” they conclude.

Before long, they’ve decided Amy should stand against Gwendolyn in the upcoming PTA elections and, no surprises, Gwendolyn does her utmost to thwart her plans.

Some scenes are a little ridiculous – the late-night supermarket trip, for example, where the three new friends cause drunken chaos. But that’s only to be expected from the makers of The Hangover trilogy, Jon Lucas and Scott Moore. 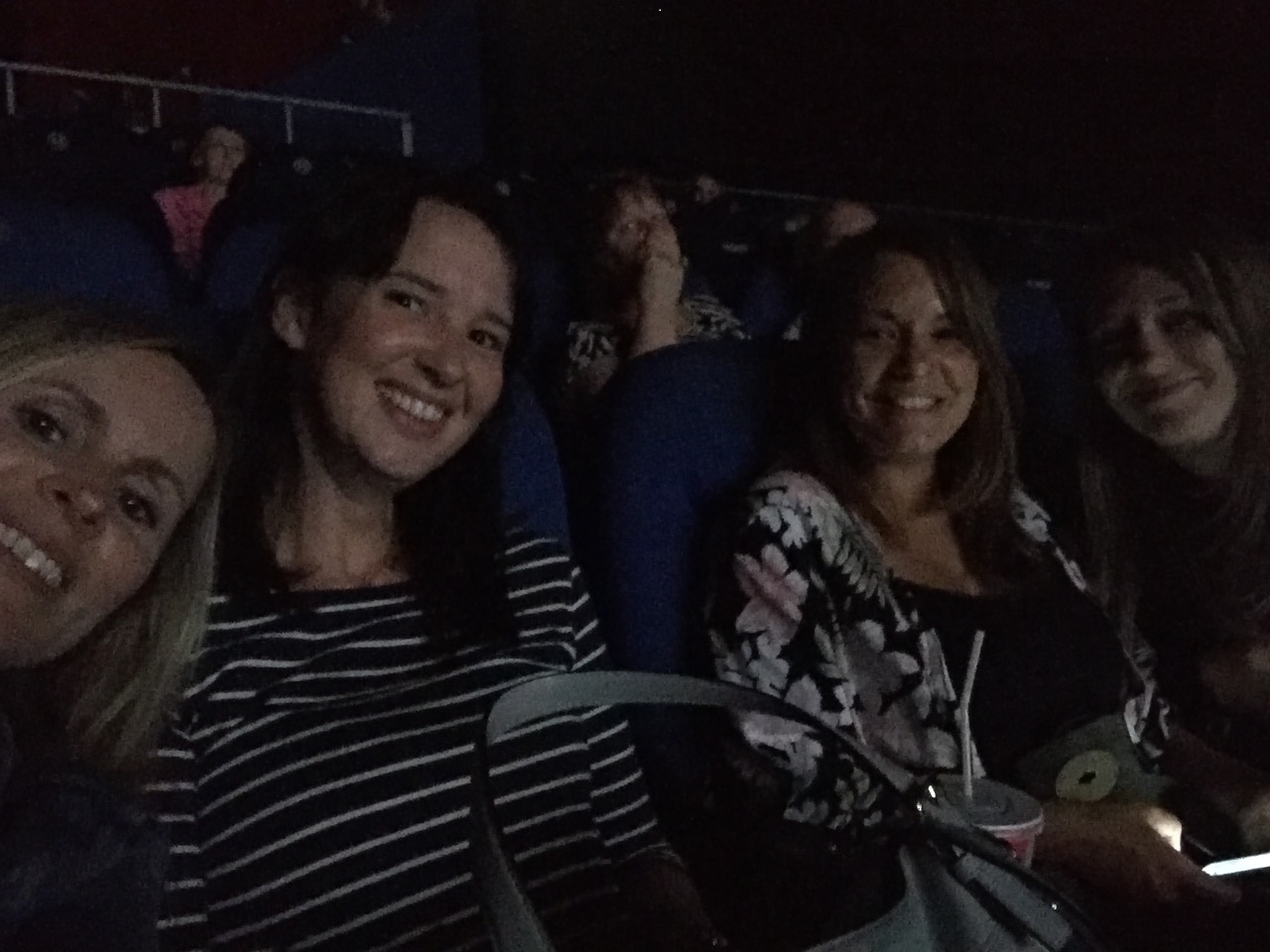 Me, Alina, Kerry and Emily #southwalesbadmoms

Incidentally kudos to these two men for capturing exactly what a lot of mums are feeling but don’t often have the courage to say. Apparently they wrote it to say thank you to their own wives with Lucas saying, “I wouldn’t last one day as a mom.”

One of the PTA meetings features Amy facing her potential voters after a scandal involving her daughter. She says that while she might not be the perfect mother, she’s doing her best, prompting other mums to reveal their Bad Mom confessions in solidarity. “My kids haven’t washed for three weeks,” says one. “I can’t tell my twins apart,” says another. I wanted to join in with my own confessions.

I loved all the mums letting loose and having a teenage-style house party (ending at a respectable 11pm, obviously!) and the hilarious scene where Carla and Kiki help Amy to find the perfect outfit because she decides she needs to get laid. “Holy fuck! Is that your mom bra?” asks Carla. “It looks like you have one long boob.” “This is my sexy bra” says Amy.

I cried with laughter at several points.

The hoody/foreskin scene, for example, which I won’t even attempt to explain here, but which you’ll just have to see for yourselves!

But I also found it a lot more emotional and deeper than I’d expected.

Amy realises she’s been doing too much for her children and tells her son he’s at risk of becoming “another self-entitled white man” and needs to start doing things for himself. Kiki tells her controlling husband that no, she won’t come home to deal with crying kids because she’s out with her friends. He’ll just have to deal with it. It would have been good to have seen more of this girl power shining through. And we soon realise even the most perfect-appearing of mums have their own crap going on in their lives.

Bad Moms isn’t going to win any Oscars. It won’t impress the serious critics. But if you’re a mum who, in the words of Amy, “just wants to do less stuff” and not feel judged – then you’ll love it. It’s funny, heartfelt, very true-to-life in parts and easy to watch – which is always great for knackered mums at the end of a hectic day when the last thing you want to do is to concentrate on anything too heavy.

Make a date with your mummy friends (if you can coordinate childcare that is), buy yourself a huge bag of pick-a-mix. Actually, make that a gin in a tin. And enjoy. Because Bad Moms is the perfect mummy night out.

My only issue is with the word Bad. Because we are not Bad. We are normal mums. No, scratch that. We are flipping awesome mums, juggling the pressures of motherhood, always doing our best.

Bad Moms (15) is in cinemas nationwide.

Thanks to Odeon Cardiff Bay and The Red Dragon Centre for hosting us.

Have you seen Bad Moms? Let me know what you thought in the comments below, on the Cardiff Mummy Says Facebook page or by tweeting me on @cardiffmummy