Brilliantly bizarre and surreal, visually impressive, full of catchy original music, and with strong performances all round, we absolutely loved Alice in Wonderland at Cardiff’s Sherman Theatre last night.

Every Christmas the Sherman’s family theatre productions are a real highlight of our festive season with high-quality stage adaptations of classic children’s books for older children aged seven and above; and fun and engaging stage versions of fairy tales for younger children aged three to six.

This year’s offering for younger children is Little Red Riding Hood (also being performed in Welsh as Yr Hugan Fach Goch) which is currently touring Wales before returning to the Sherman from Monday 3 to Saturday 29 December.

And, for the older children, Alice In Wonderland opened on Friday 23 November and runs until Saturday 29 December, with the press performance taking place last night.

Mike Kenny’s stage adaptation is nothing like the Disney version of Lewis Carroll’s famous children’s book that most people will be familiar with. And it’s not as dark as the Tim Burton film adaptation that might also spring to mind. 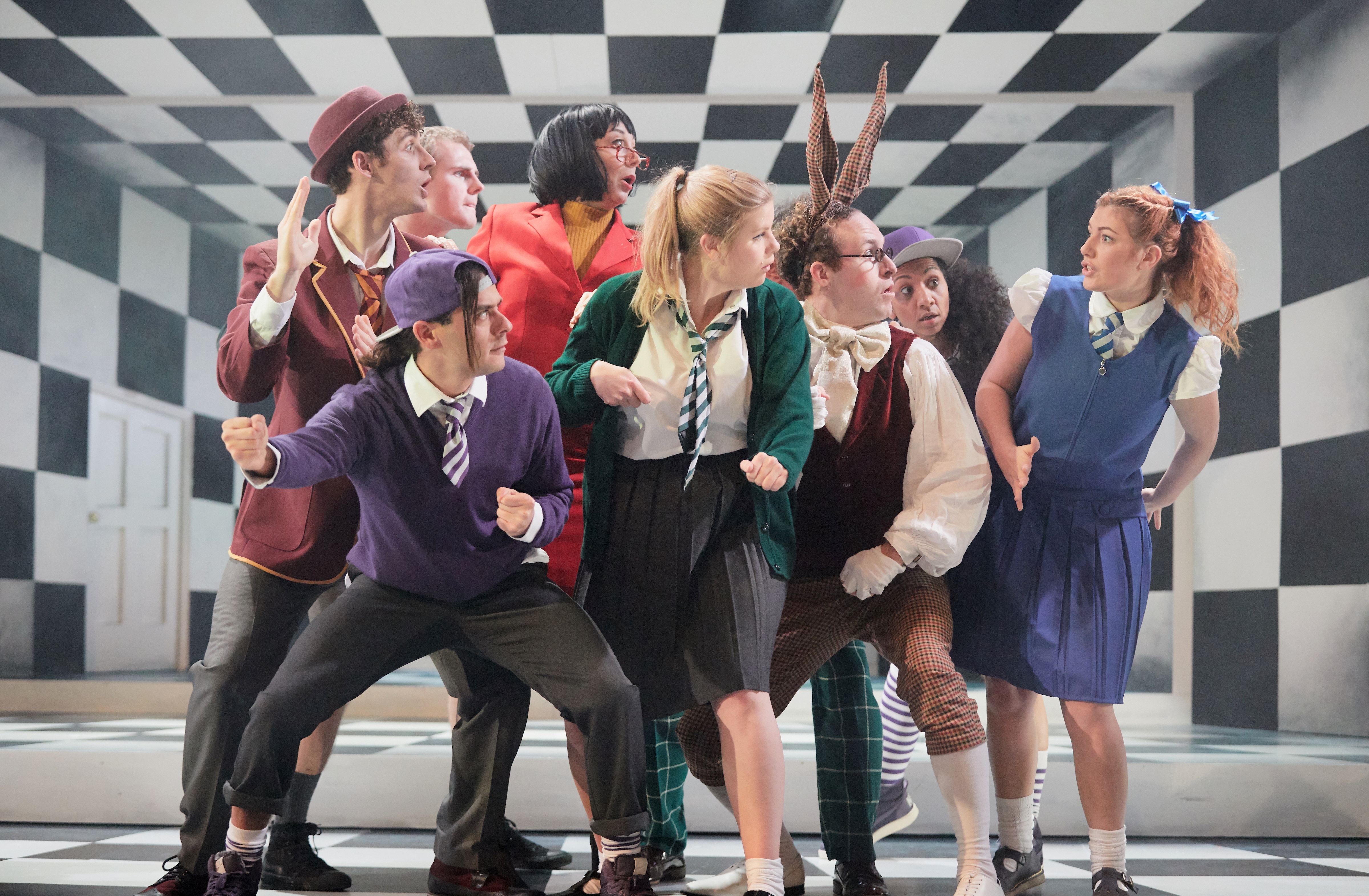 This contemporary version opens with Alice as a teenage girl getting ready to sit her exams. We feel the turmoil of her inner mind and the pressure of her exams as her family, teacher and even the school bullies morph into such familiar characters as the White Rabbit, the Duchess, the Queen of Hearts, the Cheshire Cat, and Tweedledee and Tweedledum and Alice questions who she is and everything she knows.

It’s an energetic and vibrant show which unfolds in a dream-like manner as Alice navigates the truly bizarre world she has found herself in.

Although Mike Kenny’s script has been performed once previously, the Sherman’s staging and direction is original – and imaginatively ambitious, thanks to artistic director Rachel O’Riordan at the helm. Sadly for Cardiff she’s soon to depart the Sherman after four and a half years to take up a post at the Lyric Hammersmith. But what a legacy she is leaving behind – not least showing that children’s theatre can be as dynamic, ambitious and edgy as the shows for the grown-ups which have brought the Sherman much acclaim these last few years. 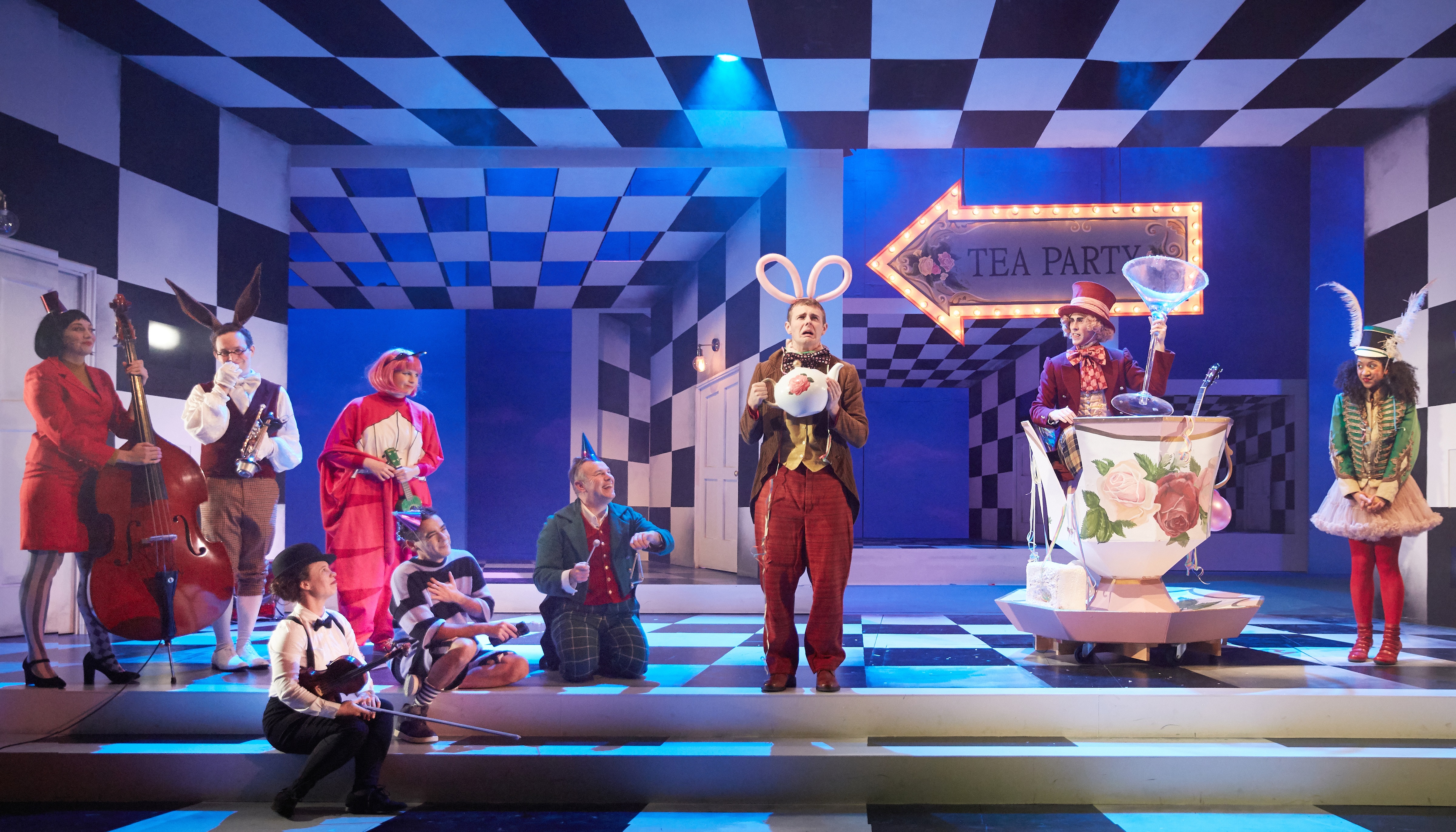 All the familiar elements of the classic Alice story are here including the Mad Hatter, Dormouse and March Hare’s tea party (brilliantly executed with the trio entering the stage in a giant teacup); the croquet match with flamingos for mallets, the Queen of Hearts and her constant chants of ‘off with their heads’; and the White Rabbit running around worrying that he’s late. But this imaginative re-staging subtly delves deeper, bringing to the fore teenage anxieties and pressures. After feeling too big and too small Alice realises she’s perfect as she is and that whichever door she takes things will work out okay; it’s an important message to get across.

The 10-strong cast features many faces familiar to those who have seen previous productions at the Sherman.

Kieron Self as the Duchess and Hannah McPake as the Queen of Hearts gave two of my favourite performances. Both look fantastic wearing the most amazing and elaborate dresses and they certainly seemed to be relishing their flamboyant roles. Kieron Self – who we have loved in previous years as Toad in last year’s Wind in the Willows and Pod in The Borrowers – gives his part a real panto dame flavour. He has the whole audience laughing but is slightly eerie and menacing too. My children thought he was brilliant and I loved seeing him in such a different role to the last couple of years. Hannah McPake (who was also in Wind in the Willows) is eccentric and quirky as the Queen and her facial mannerisms are hilarious. The audience love her. 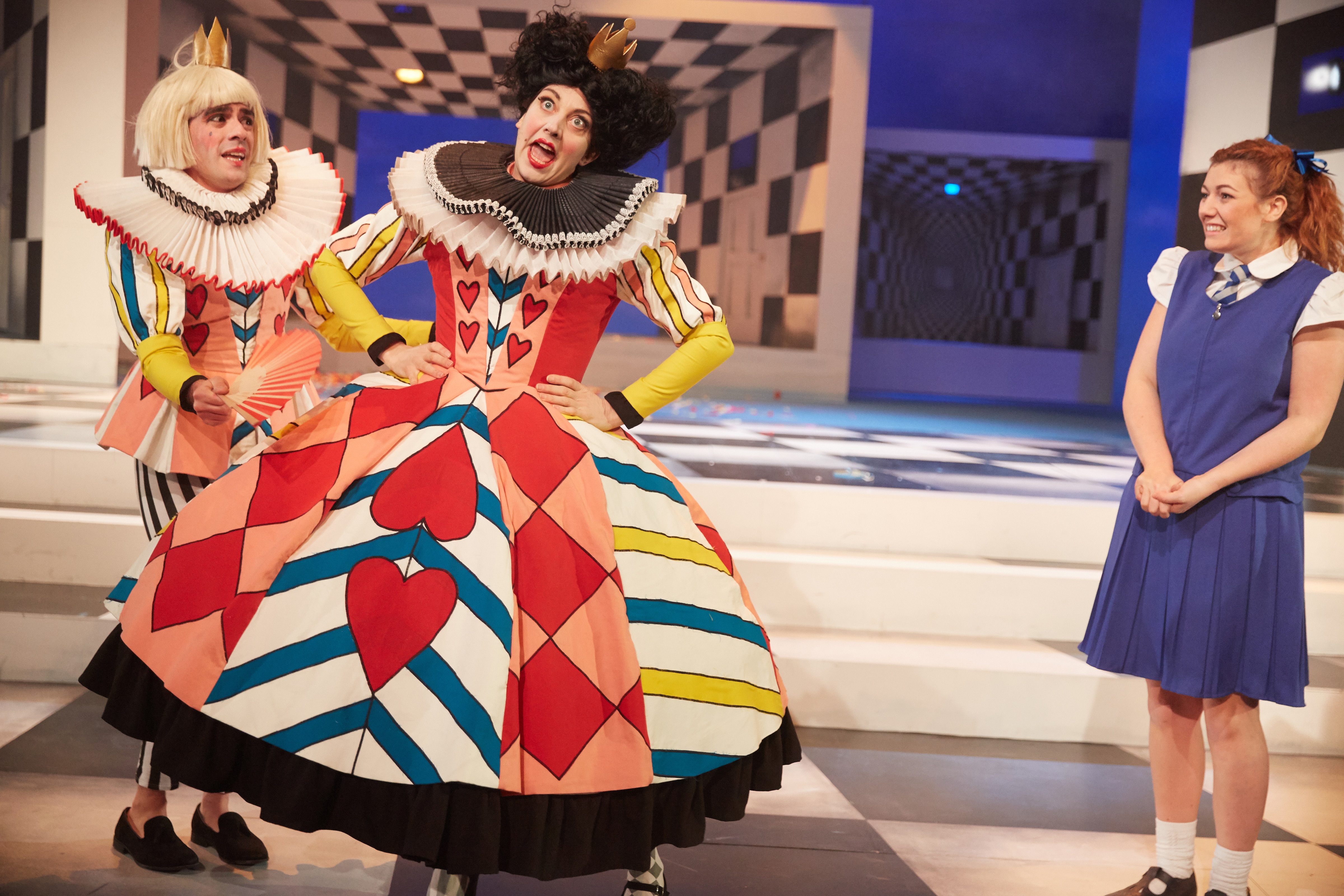 François Pandolfo as the King, Hannah McPake as the Queen of Hearts and Elian West as Alice

Elian West is a relatively new performer and makes her debut at the Sherman in the role of Alice. She’s confident and endearing; gentle and strong; and very watchable as she tries to make sense of the madcap world she finds herself in. 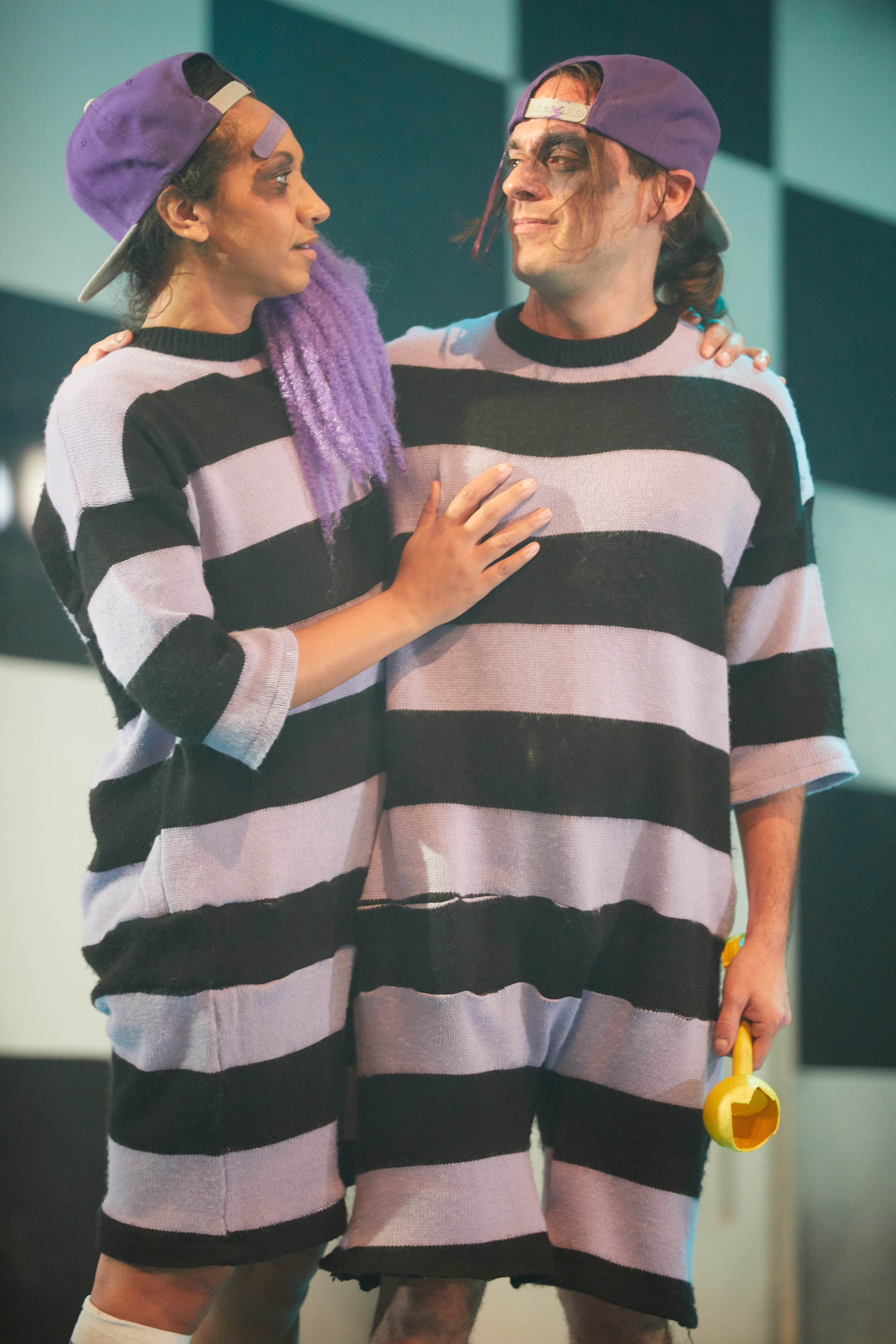 Alexandra Riley and François Pandolfo as Tweedledum and Tweedledee 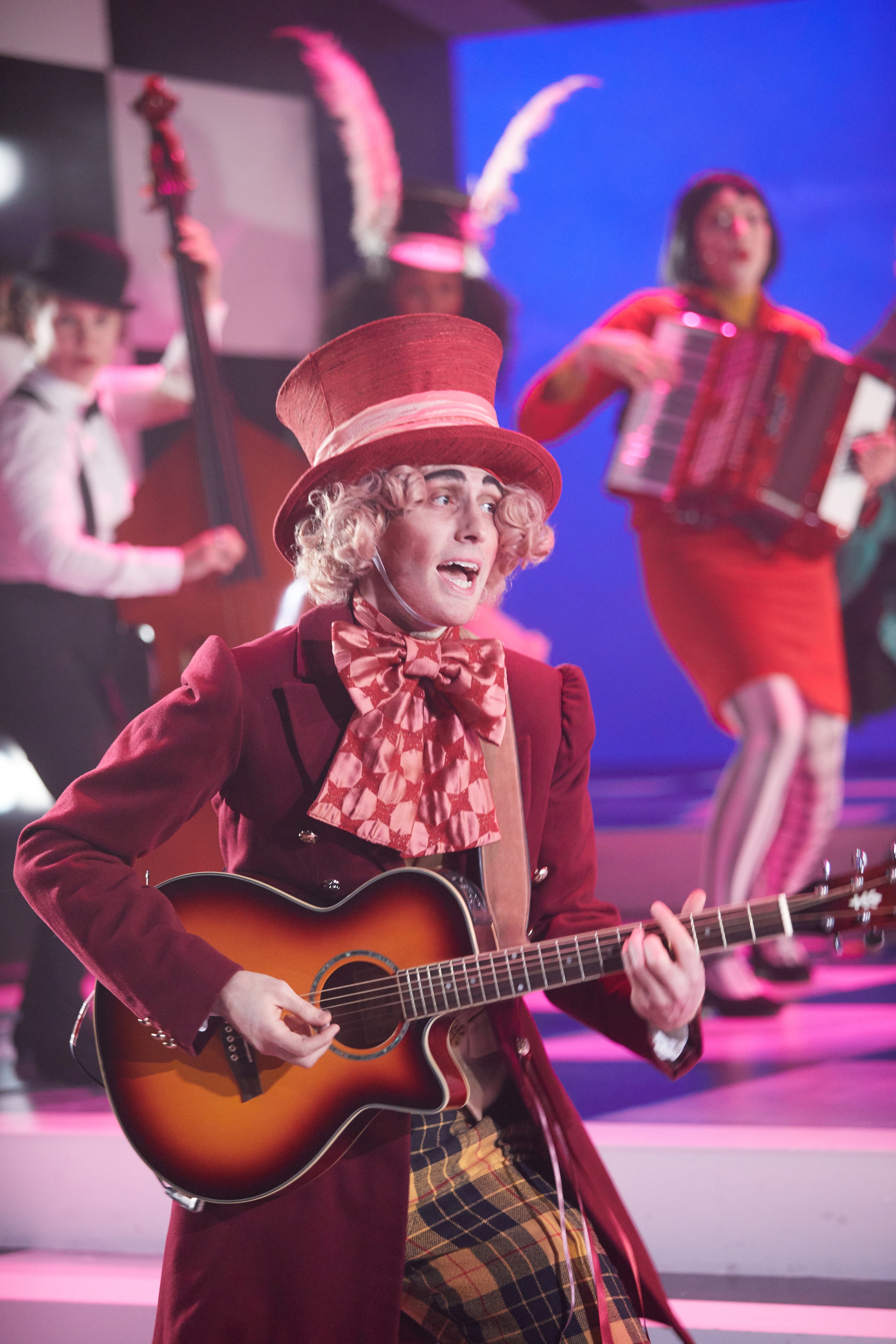 James Ifan as the Mad Hatter

Alexandria Riley and Francois Pandolfo are in perfect synch with each other as Tweedledee and Tweedledum; with Pandolfo also playing the King and Riley the March Hare.

Elin Phillips (who we last saw in The Emperor’s New Clothes at the Sherman) is a very charismatic Caterpillar and Cheshire Cat. James Ifan looked brilliant as the Mad Hatter while Joseph Tweedale scurried around the stage tying the action together as the White Rabbit.

It’s great to see the Sherman investing in new talent too with apprentice actor Callum Davies joining as Dormouse. What a great way to learn your trade!

Hayley Grindle’s set adds so much to their performances. Her black and white chessboard-style design is one of my favourite stagings I’ve seen at the Sherman. Immediately striking, it’s visible as we enter the auditorium. As the drama progresses we realise just how clever her design is as people and props appear and disappear through various doors and trap doors hidden. The squared corridor continues to the back of the stage giving the appearance as though it is never ending. However it also cleverly gets smaller so that when Alice grows bigger the set makes her look like she’s huge. 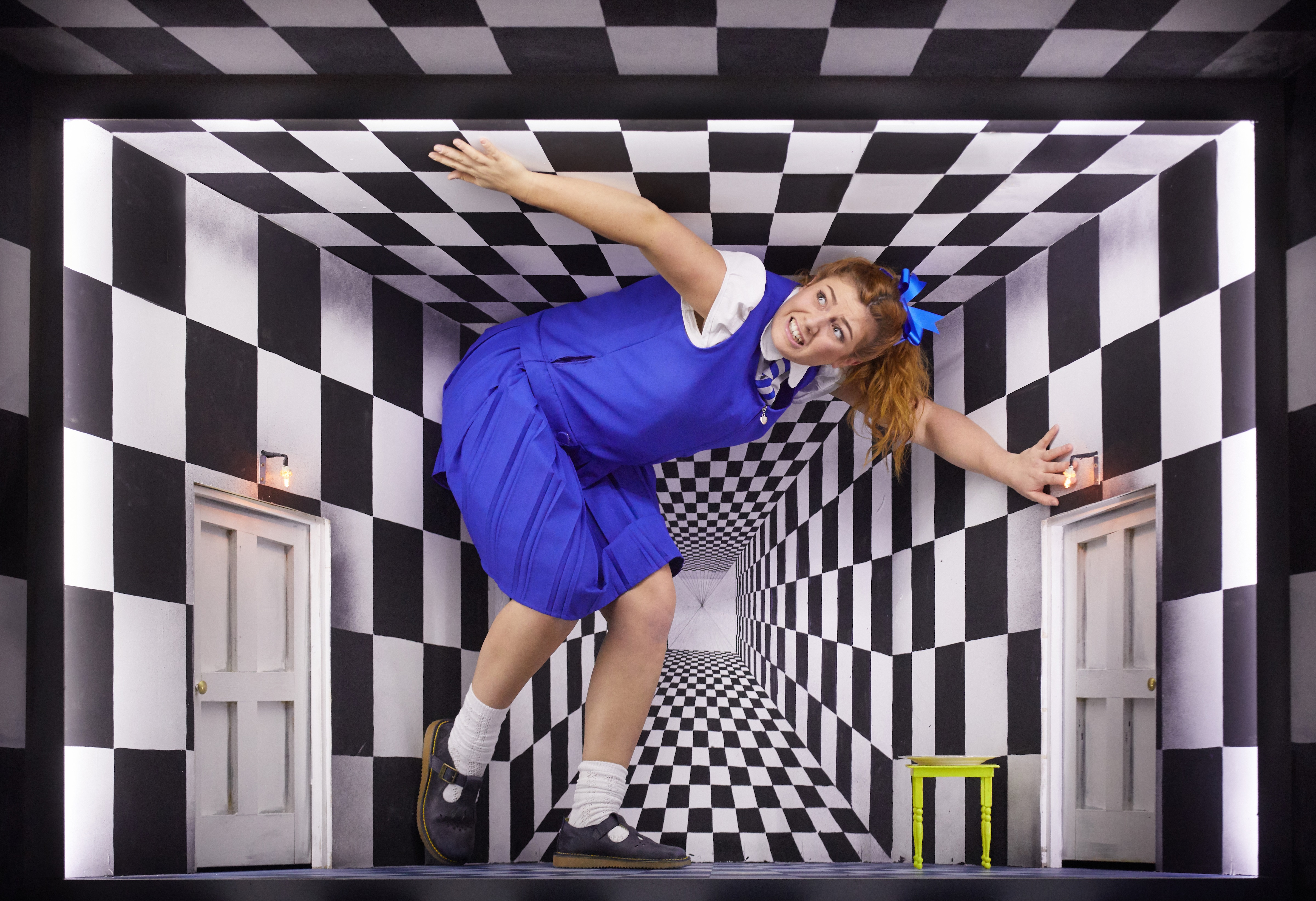 As in previous years, original live music is performed by various cast members throughout the show under the guidance of composer and musical director Lucy Rivers. One particularly catchy musical number sees The Duchess singing about babies always crying ‘wah wah wah’; the children behind me were singing it all the way through the interval.

The age guidance for this show is 7+ and I would say this is spot on. My older two children (seven and almost nine) loved it and were laughing out loud at various points throughout. My four and a half year old also enjoyed it and while he remained engaged for the whole show I think he got a bit confused with what was going on at times. 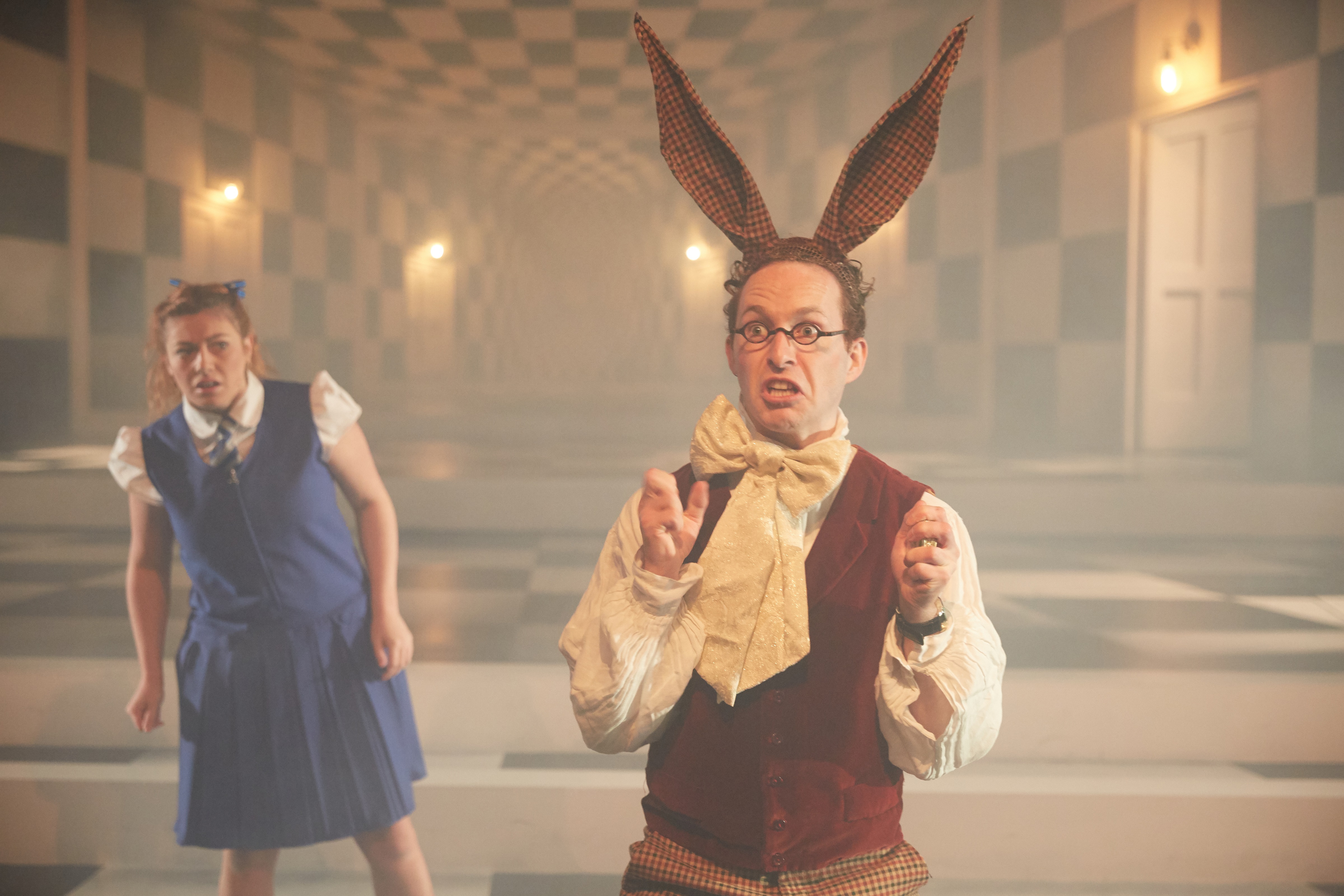 Once again the Sherman Theatre has produced an enchanting and lovable family show perfect for the festive season. Approach this production with an open mind. Expect the unexpected and banish the Disney film from your mind. The Sherman Theatre’s Alice in Wonderland is imaginative, creative and thoroughly enjoyable. We definitely recommend it.

Alice in Wonderland is at the Sherman Theatre Cardiff until Saturday 29 December. Tickets are on sale now priced from £16-£26 with children and under 25s half price and £2 off for concessions. Book online here or call the box office on 029 2064 6900. The show lasts two hours including one interval.

Have you seen Alice in Wonderland? Do let me know what you thought in the comments below; on the Cardiff Mummy Says Facebook page or by tweeting me on @cardiffmummy