To begin with, my children weren’t quite sure about yesterday’s Halloween Nights event at St Fagans National Museum of History.

We’d only been there for a few minutes and a ghoulish witch crept up on us. It felt like she appeared from nowhere. She stared at us with a haunting look and spoke in a mysterious manner. I could feel my eight year old daughter tightening her grip on my hand. My seven year old son hid behind Cardiff Daddy. I wondered if we’d made a mistake in bringing them along…

But then my four year old youngest son roared at the witch with such force and sincerity that we all burst into laughter. Except the witch who kept her composure and floated off as suddenly as she’d appeared.

And from then on my children – Little Miss E aged 8¾, Little Man O aged 7, and Littlest Boy I aged 4½ – were fine with the spooky goings-on at Cardiff’s open air museum and keen to see and take part in as much as possible. 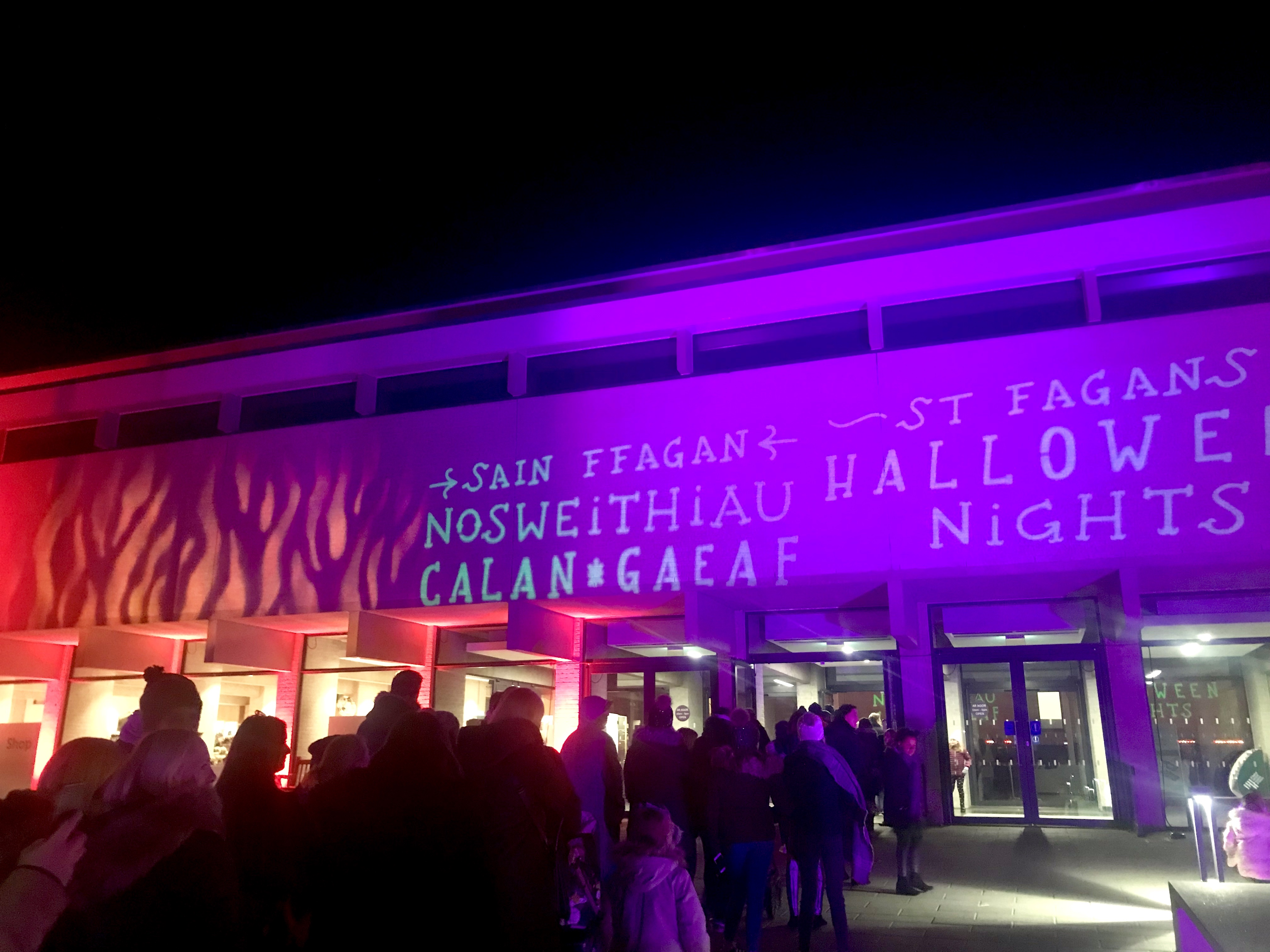 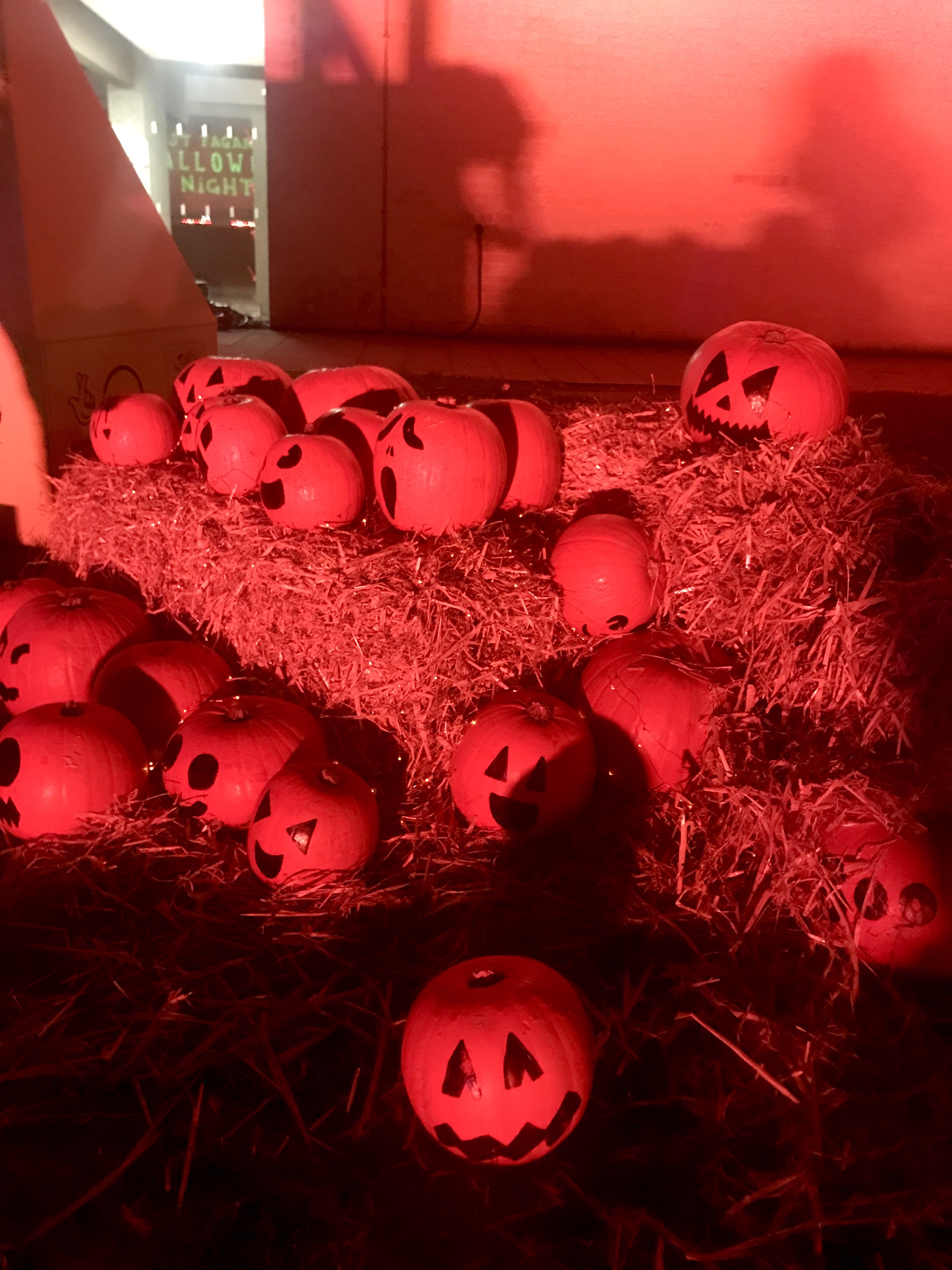 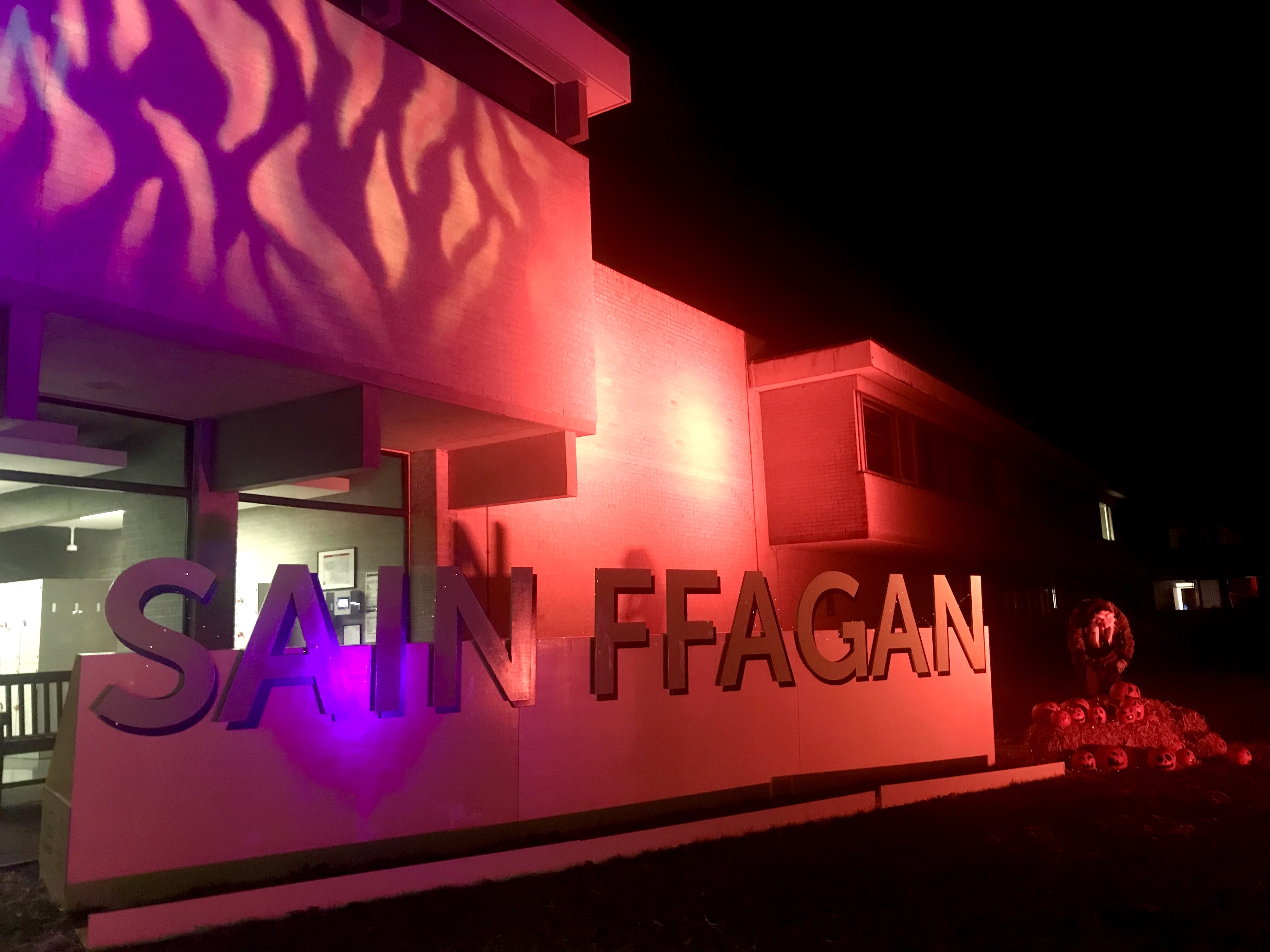 St Fagans Halloween Nights opened last night for the first of three after-dark events (if you’re quick you can still book tickets for tonight and Wednesday, although availability is limited). It’s a spooky evening of traditional Halloween customs with a few modern twists thrown in too. 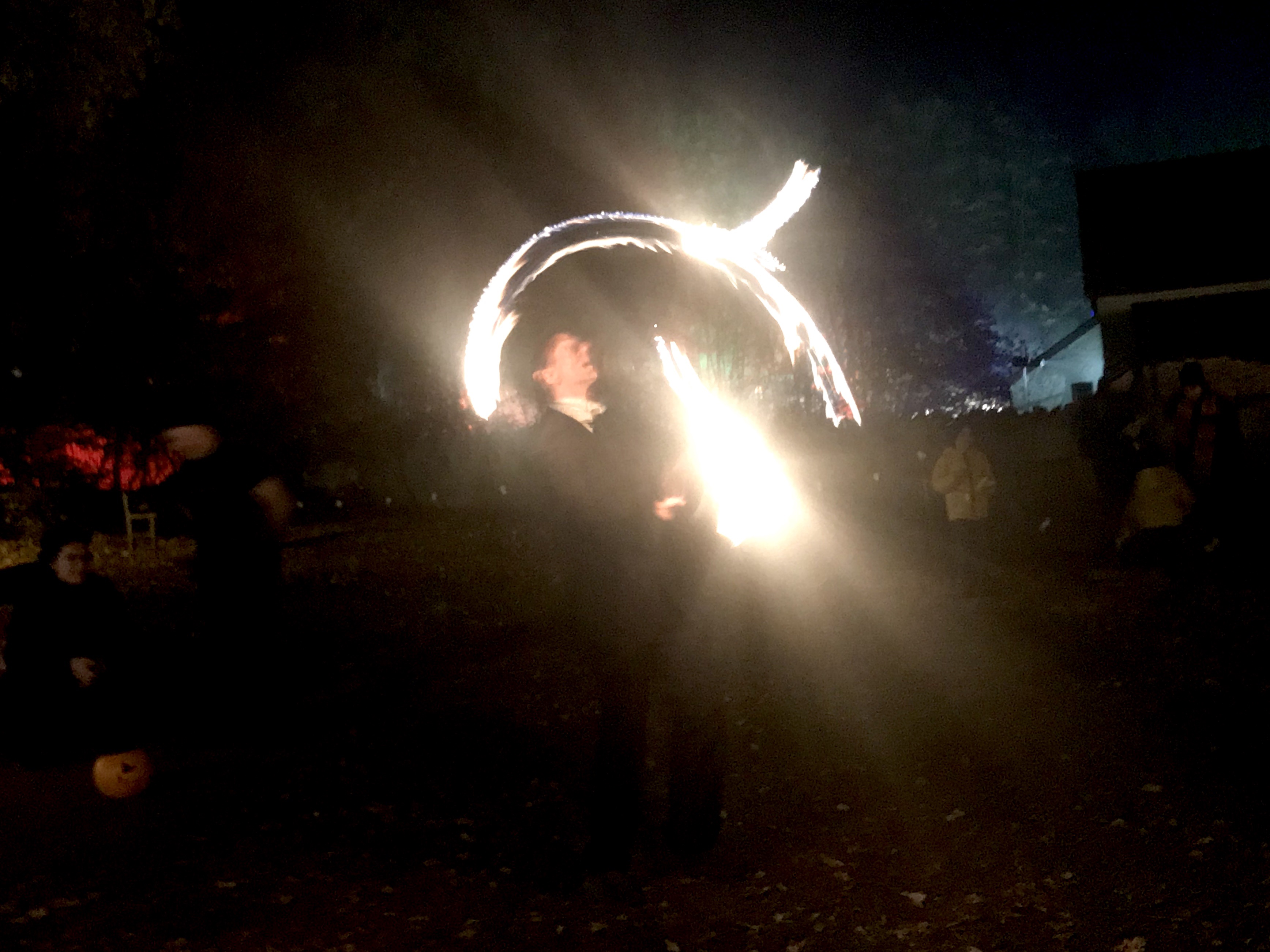 We attended as part of our role as family blogger ambassadors for the museum and our evening included listening to spooky (but family-friendly) stories in the Oakdale Miners’ Institute; making and decorating wicker wands and paper lanterns; watching in complete awe as fire jugglers threw flamed batons around with such ease; and talking to ghostly characters walking around the park such as the aforementioned witch and a deceptively charming devil on stilts. 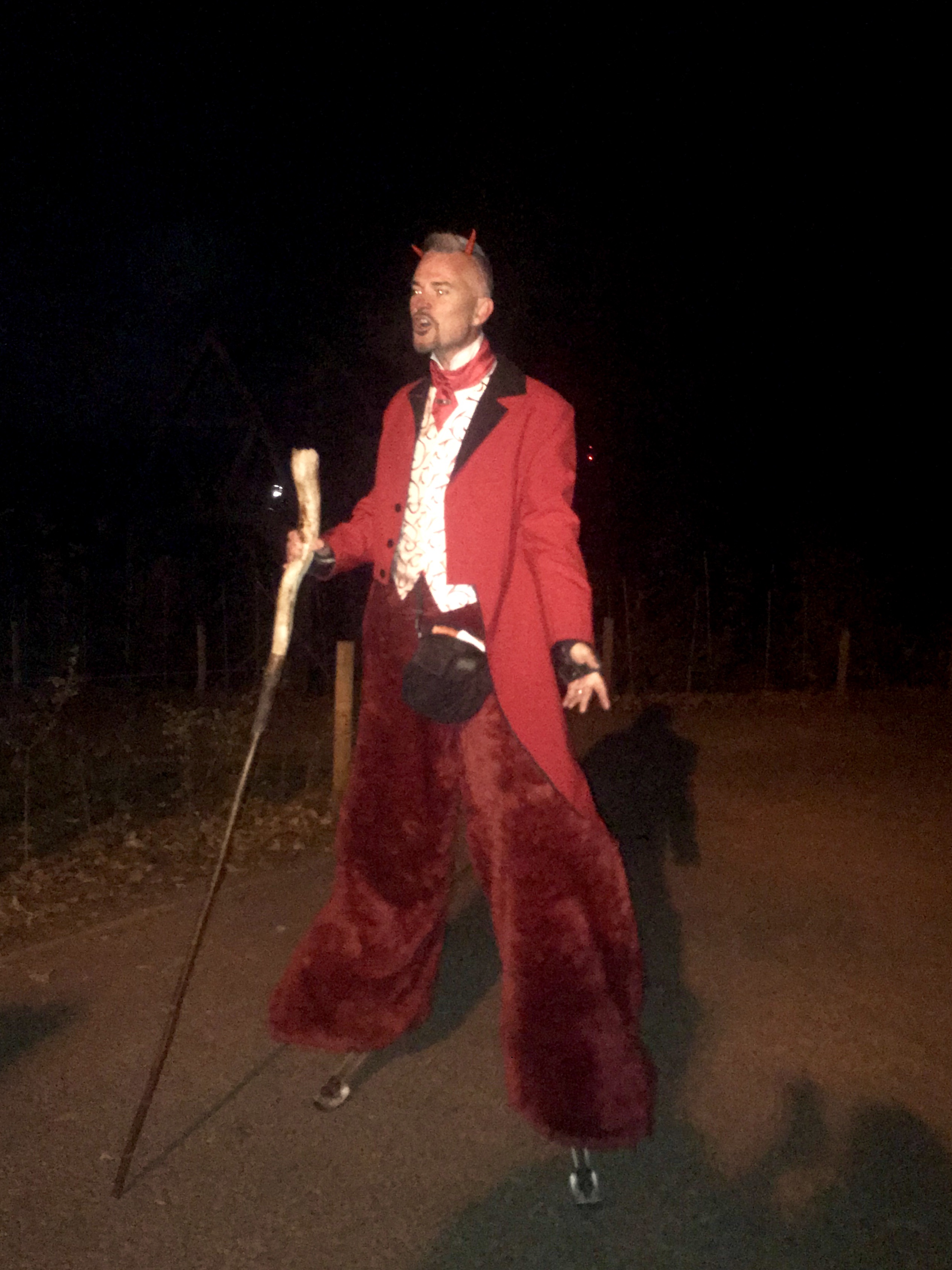 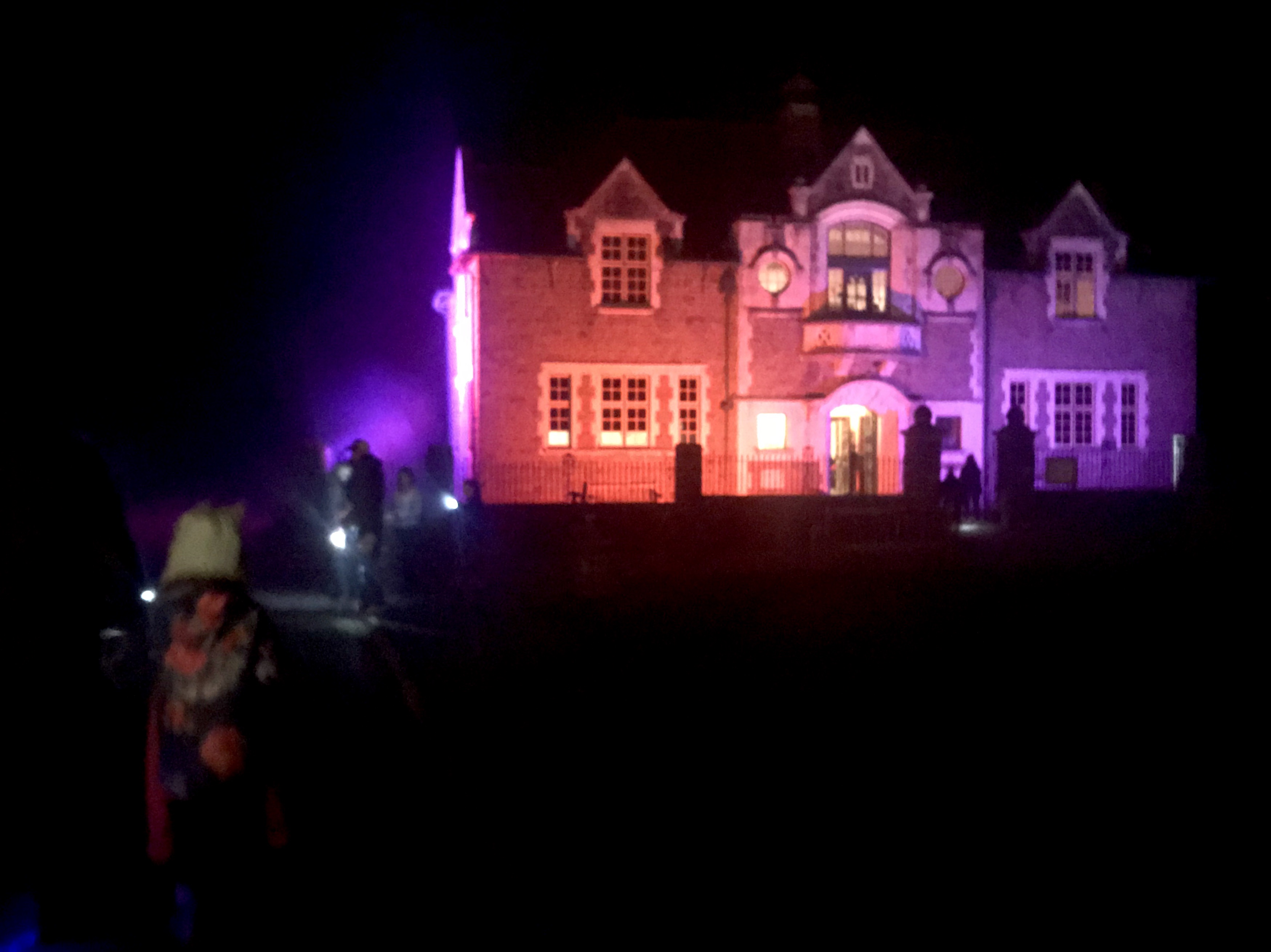 The culmination of the evening was seeing the burning of the wicker man – a huge straw effigy made up of smaller wicker people made by visitors to St Fagans during the day. We’ve taken part in the building of the wicker man previously and two years ago we watched the wicker man burning…. although this was at the end of a regular day of visiting rather than the new spooky evening event. The burning was followed by a lantern procession where we all followed Wonderbrass back to the park’s entrance, lighting the paths with our paper lanterns and the torches on our phones. All of this is included in the entry price, along with parking (usually £5 per day or £25 for an annual pass). 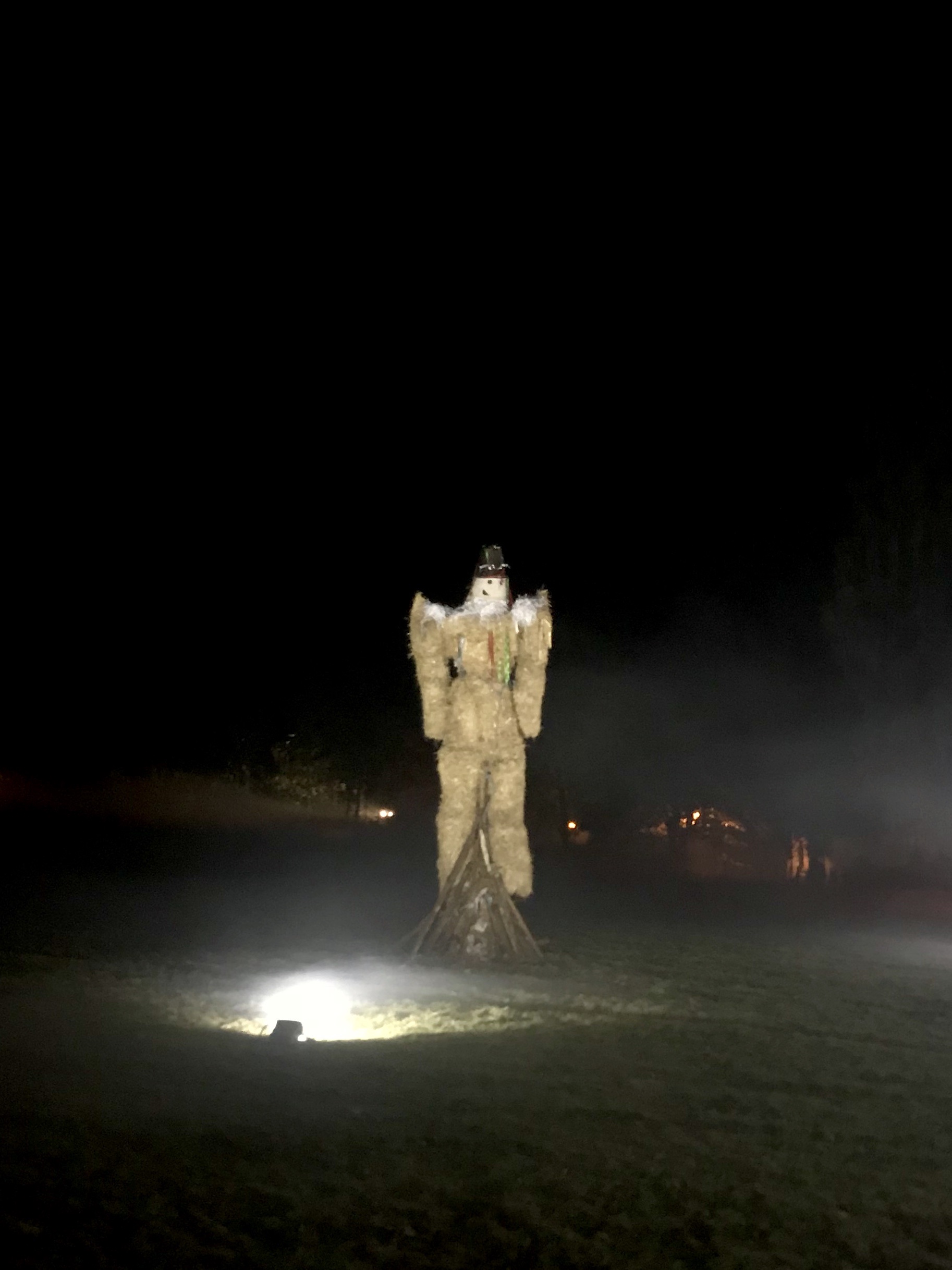 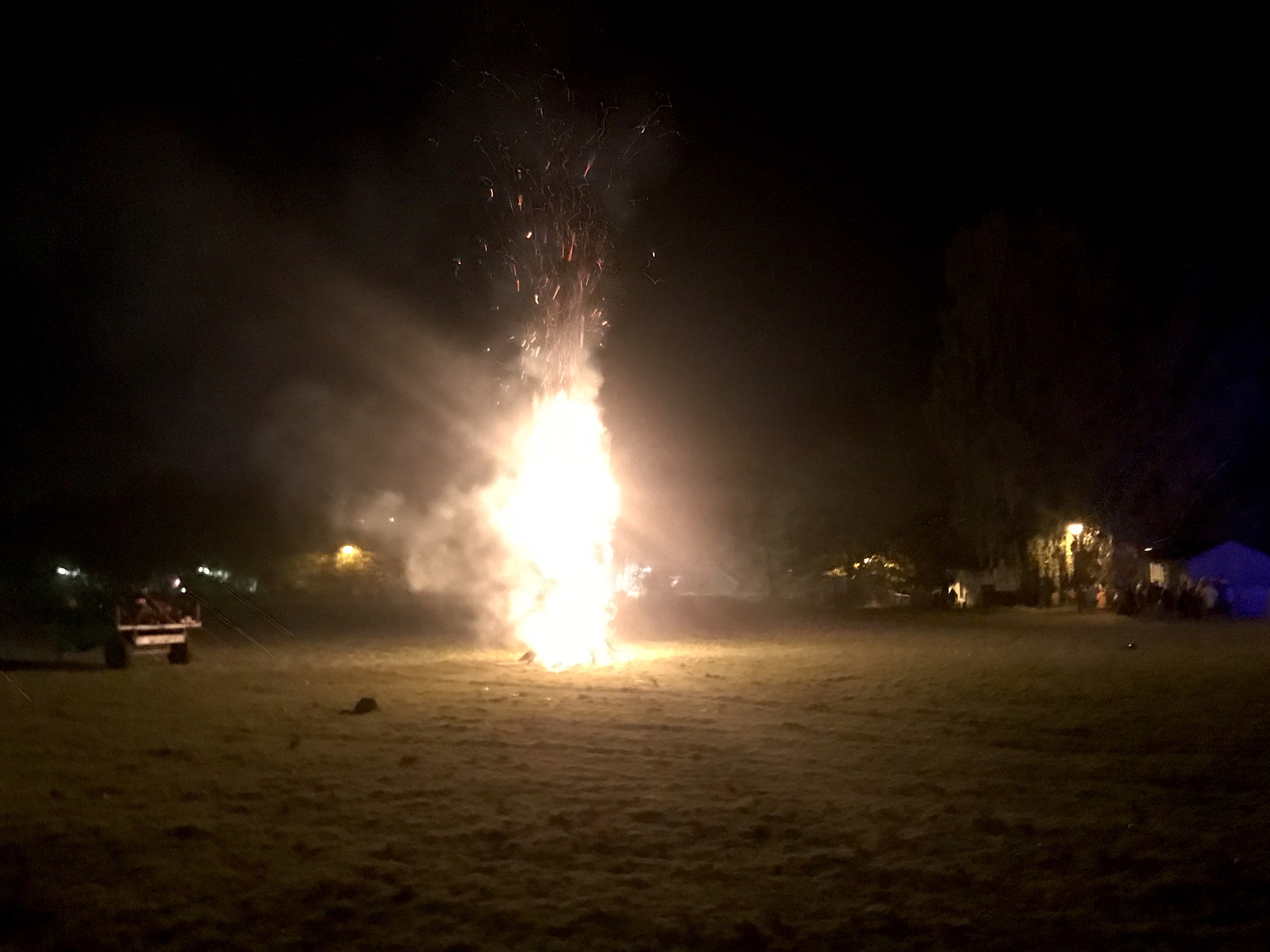 St Fagans looks so different at night with the familiar buildings lit up against the night sky. Atmospheric lighting gives the museum an eerie glow. Lasers project images of witches onto buildings. Sound effects as you walk around the grounds add to the tension.

Thankfully my children were fine despite their initial misgivings, but I can imagine some younger and/or more sensitive children would be scared.

St Fagan’s traditional fairground is in operation with most rides costing around £2. They had one ride each. Littlest sat at the top of the double decker bus on the carousel while my other two went on the chair swings. 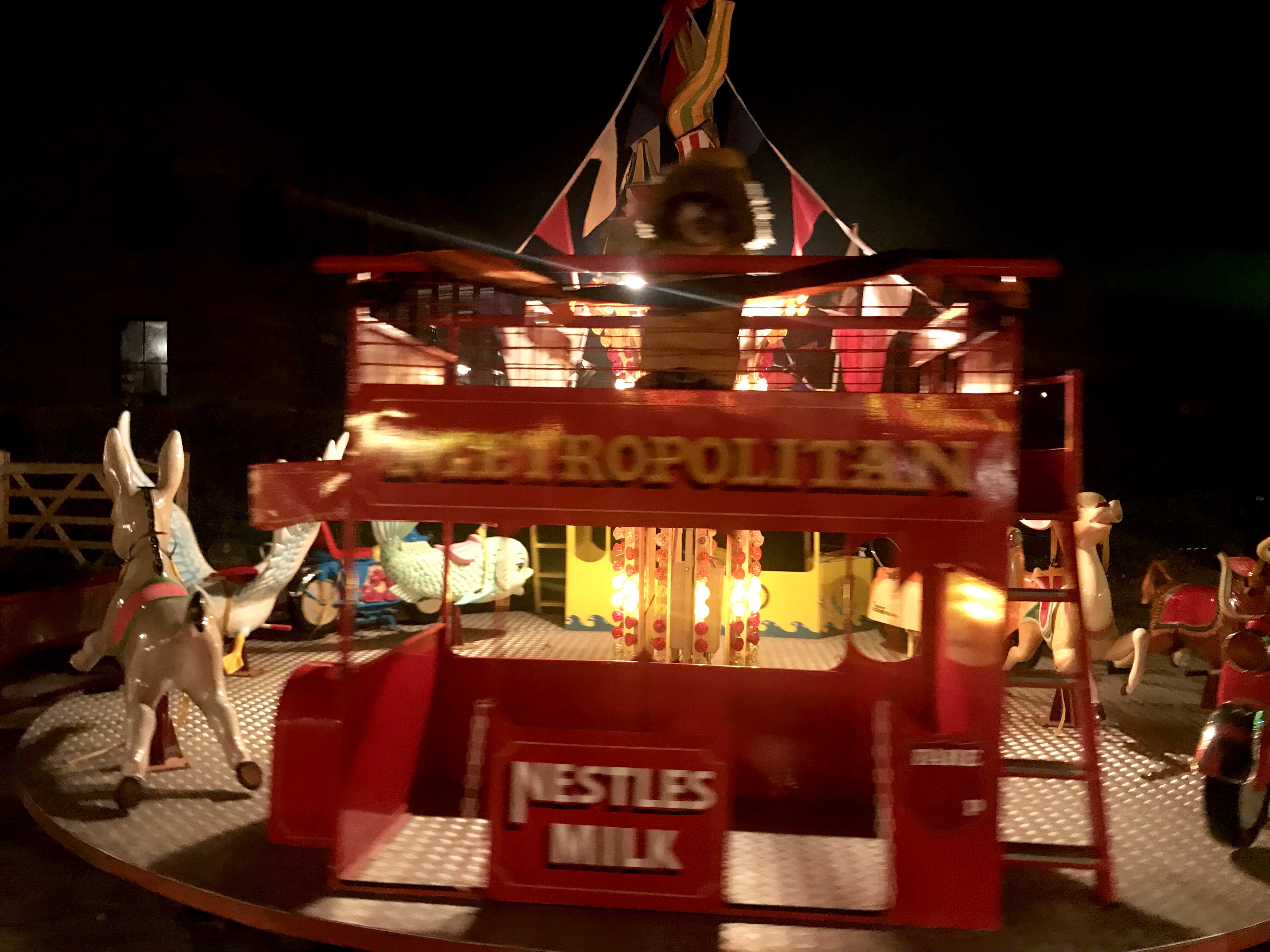 There are also various snack kiosks around the site selling hot and cold drinks and snacks while the new restaurant in the redeveloped entrance building remained open all evening.

The sudden change in temperature meant it was cold although we’d wrapped up with layers, winter coats, hats, scarves and gloves (over Halloween fancy dress in my children’s case). Plus the indoor activities gave us the opportunity to step out of the cold and to warm up.

We filled our three hours at St Fagans easily. In fact, we ran out of time to attend the Creepy Craft workshops in the new Weston Learning Centre (in the new entrance building), which was a shame because I know my children would have loved this. 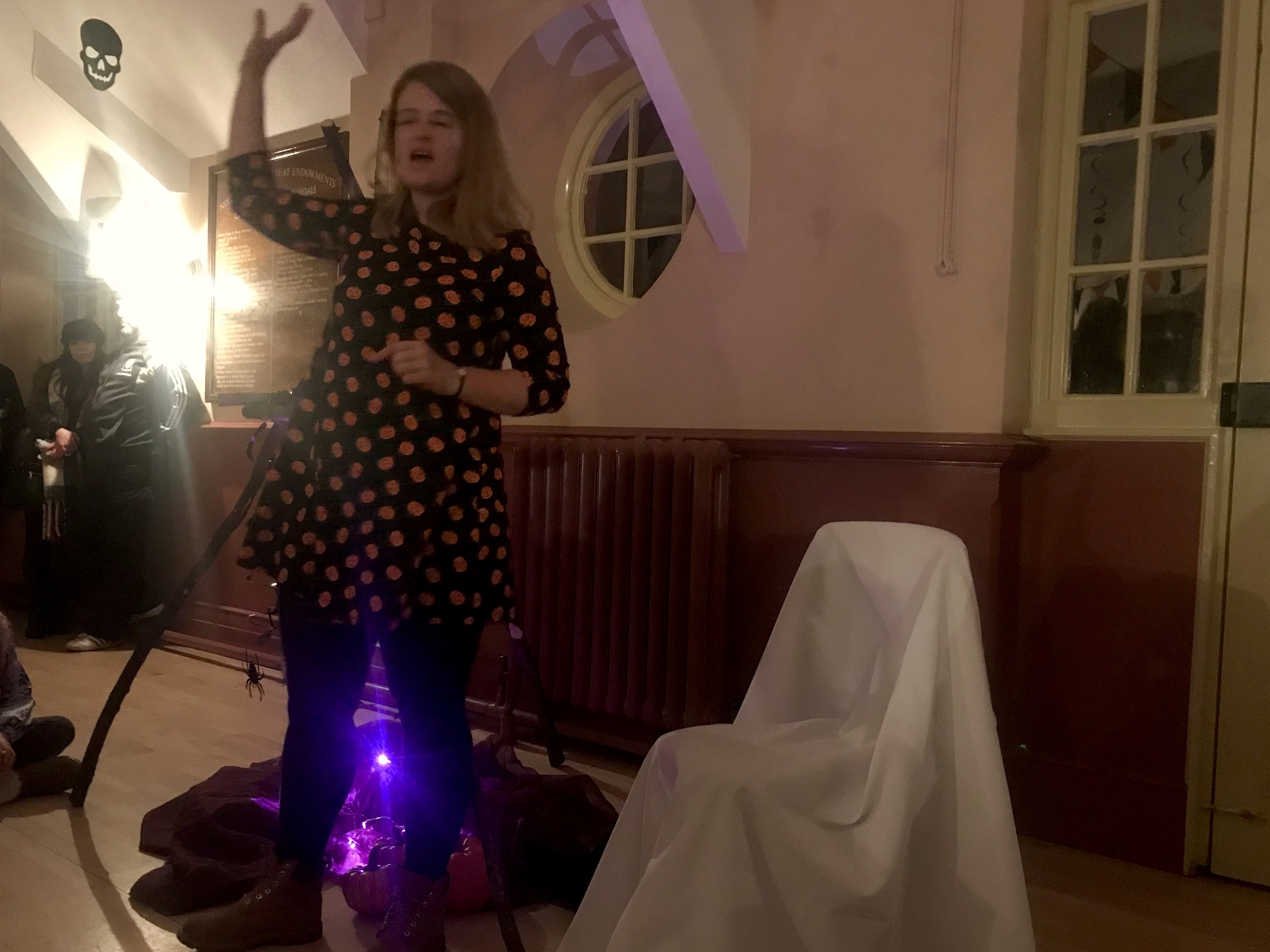 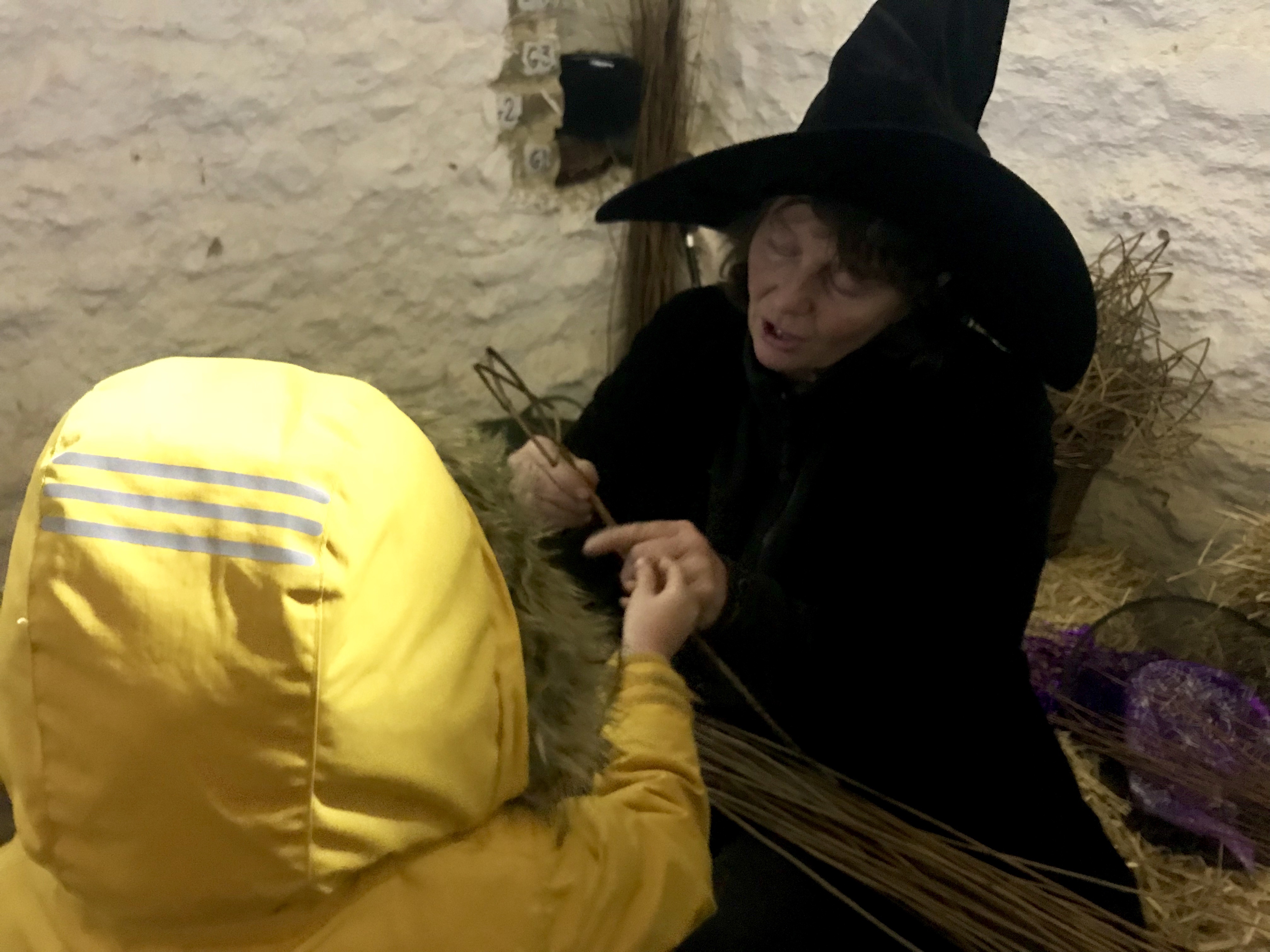 There were also two activities we didn’t visit as they were aimed at those over 12 – storytelling of darker tales for older and braver children in Penrhiw Chapel; and, new for 2018, the Scare Zone.

I’m really sorry not to be able to tell you what this was about. I did intend to check it out in the name of journalistic research…. but chickened out.

I guess you can see where my children get their scaredy-cat nature from!

There’s plenty going on during the day times over half term too including building the wicker man today and tomorrow between 12pm and 4pm.

Thursday 1 and Friday 2 November see free craft sessions in the Weston Centre for Learning as part of Wales Remember WW1. The Makers Market is also running until Friday 2 November with craft activities for children available at an extra charge.

You can also check out the newly-opened galleries and Llys Llewelyn medieval court which opened last week as the culmination of St Fagans £30m six-year renovation project. Read more here.