When Jamie’s Italian Cardiff opened just over five years ago, it was the place to eat. Everyone I knew was desperate to dine there and there were always huge queues out the door. After all, Jamie Oliver is one of the UK’s most famous chefs with several successful television shows, a number of best-selling books, and a whole host of food products to his name. This was a really big thing to happen to the Cardiff foodie scene back in 2009; Jamie’s was one of the flagship names coming to Wales for the first time as the long-awaited St David’s 2 shopping centre opened its doors.

I was massively pregnant with Little Miss E at the time, and having to queue to eat at a crowded restaurant when my ankles were so swollen I could barely stand was the last thing I wanted to be doing. Everyone I knew went and told me it was wonderful – but somehow, I never made it there. 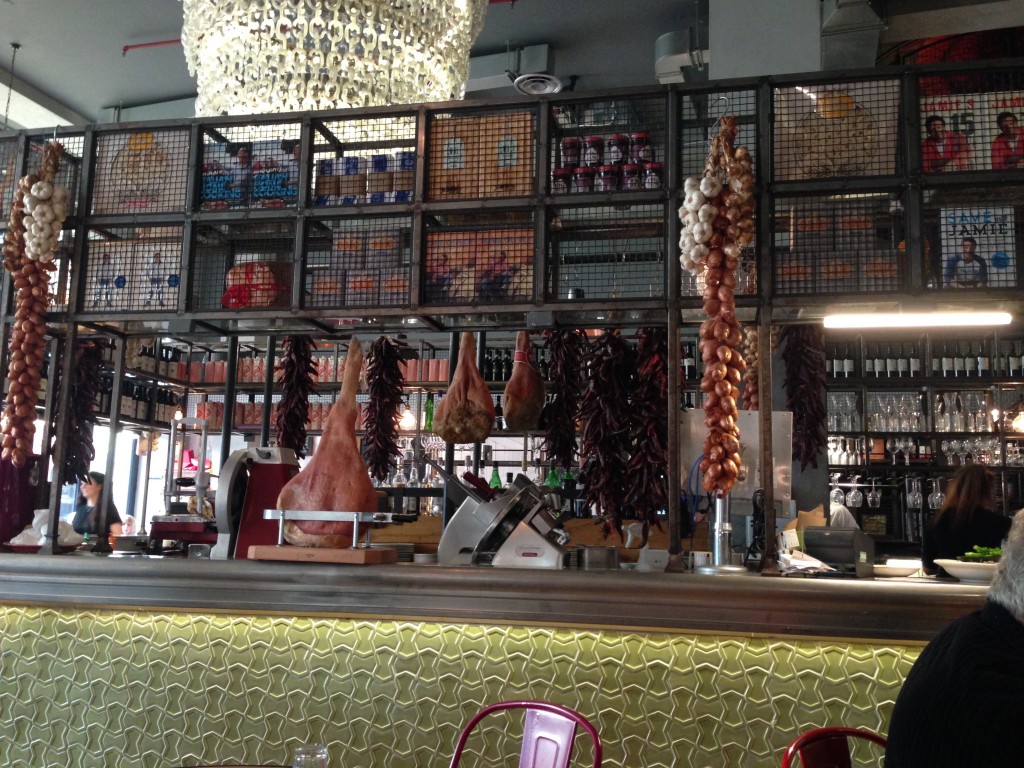 Five years later and I was thrilled when Jamie’s invited me and my family along. It’s always such a treat when someone else does the cooking and the clearing up so obviously I accepted straight away.

With so many other new restaurants now creating a buzz in Cardiff, I wondered how Jamie’s would compare now it was no longer the new kid on the block. I know that Jamie is a family man with four children of his own, but I also wondered how family-friendly his restaurant would actually be. Eating out with children isn’t always easy, as every parent who has attempted it will know.

We booked a table for 4.30pm on Saturday – tea time for us is usually about 5pm, so I thought this would give us enough time to order before my children got too hungry, and I also wanted to miss the lunch time rush and be out of the way before the evening diners arrived. I was surprised that even at this time of day, almost every table on the restaurant’s two floors was full – and with a real cross-section of diners, too. There were other families but also couples of all ages enjoying a meal after a day’s shopping, a group of mums on a rare night out and accompanying their meal with plenty of cocktails, and a group of lads who looked like they were ready for a night out on the town. There was a lively atmosphere for the whole two and a half hours we were there. It wasn’t too loud that we couldn’t hear each other talk, but the background chatter and pop soundtrack was loud enough that we didn’t feel paranoid any time our children made a noise. 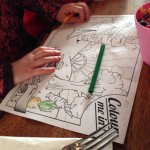 Little Miss E, age 5, and Little Man O, 3, loved the colouring sheets they were given, which also had the children’s menu on the back. We’d brought along toys and colouring books just in case we’d needed them, but it always makes you feel your children are properly welcome when restaurants present you with crayons and paper without the need to ask.

We ordered some bread and olives to share between us to start. A lot of other diners seemed to have opted for the antipasti sharing planks, but we kept it simple as we wanted to save some room for dessert. 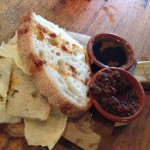 The artisan bread basket had a nice selection of rosemary focaccia, ciabatta, seeded crackerbread, sourdough and grissini sticks, alongside olive oil, balsamic and olive tapenade for dipping. The World’s Best Olive’s On Ice was quite possibly exaggerating but they were deliciously succulent. I would have liked a few more though. 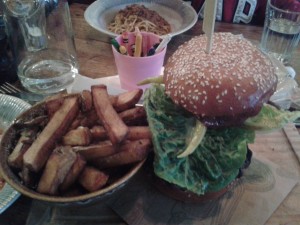 It took Cardiff Daddy a while to decide what to order. There was a good choice of steak, fish, lobster, chicken and pasta dishes, but after seeing someone on the table next to ours having the impressive-looking Jamie’s Italian burger, he went for that. Despite its size, Cardiff Daddy is of the belief that burgers should be eaten with your hands and not cut up into bite sizes pieces as more well-mannered people tend to do. He cleaned his plate without getting too messy, so I think it was a success.

We both ordered the funky chips – triple cooked with rosemary and garlic and recommended to me by so many people. They were amazing and totally worth their £4 price tag. I ate all of my portion, plus half of Cardiff Daddy’s. Ooops! 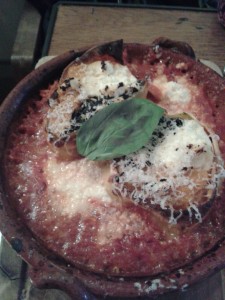 I didn’t just have chips… I’m vegetarian so opted for the vegetable rotolo al forno – seasonal pumpkin, squash and spinach rolled in fresh pasta sheets and baked with tomatoes, ricotta and basil. It’s worth letting your server know if you are veggie, vegan or have any other dietary requirements, as some items on the menu might look veggie/vegan but will need slight adaptations, for example, omitting the parmesan from this dish. I wasn’t quite sure what to expect from the description, but it was delicious. A lovely blend of flavours and not too much pasta, as is often the case with vegetarian meals. 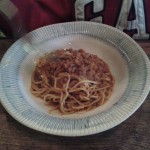 My eldest two children had spaghetti bolognaise – and cleaned their plates. Baby had curly wurly tomato pasta bake. Again, he devoured it. The other children’s options all looked good, including chicken lollipops made with free-range organic chicken; happy fish fingers; and mini sliders 0rganic chicken and beef patties. 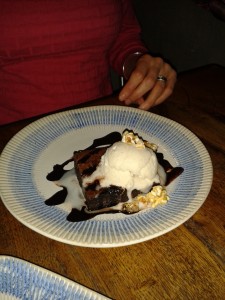 I probably shouldn’t have had a dessert, as I was already full to bursting after all those amazing chips, but the epic brownie – a “warm fudgy brownie with vanilla ice cream and caramelised popcorn” – sounded too good to resist. Cardiff Daddy and I ordered one each and it was indeed epic; full of flavour, not too heavy – and gone in seconds. Someone on another table was eating the Amalfi lemon meringue cheesecake, and that looked good too. The children’s dessert options were ice cream or fresh fruit at a bargain 50p each, so Little Miss E and Little Man O had the former and Baby had the latter. He’s young enough not to notice that his big brother and sister were eating a slightly more exciting option.

In terms of baby facilities, Baby Boy I sat in a Stokke Tripp Trapp high chair – the restaurant had a good number of these available for its youngest diners. The baby change facility was up two flights of stairs, which isn’t ideal, but it was nice and clean and the period style of the bathroom was lovely. The friendly staff also put Baby’s buggy behind the front counter during the meal, so we didn’t have to worry about it being in our way, or that of other people.

The service we received was good – attentive but without fussing over us too much. The mains could have come out a little sooner after the starters, but all the staff were friendly and polite. Usually when I review restaurants I like to do so without the staff knowing so that I can get a true reflection of the service. I paid close attention to those dining around me though, even asking one lady I got chatting to in the toilets how her night as going, and there didn’t seem to be any complaints.

As we left, both Cardiff Daddy and I felt that we’d had a “proper Saturday night” experience. It might not have been a big night out on the town, but it was so refreshing to do something different at the weekend; a real treat. Little Miss E and Little Man O were just as delighted with the badges given to them on their way out. A nice touch and a lovely souvenir for them of a lovely family experience.

Disclaimer: we were invited to Jamie’s Italian Cardiff in return for a review but all opinions are honest and our own.