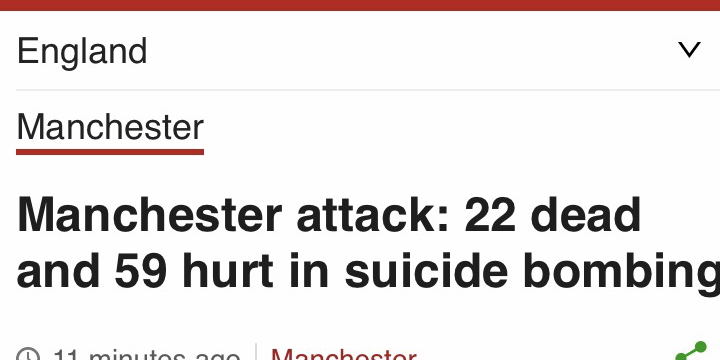 “Mummy, why are you crying?”

I’d gone to the bathroom to compose myself after seeing the breaking news icon flash up on my phone.

I could feel the tears in my eyes even before I’d had the chance to read the sheer scale of the atrocities. I read the reports of children and teenagers among the dead. Children and parents frantically searching for each other.

Because even if you weren’t there, even if you don’t know anyone who was there, how can your heart not break for those affected by the attack?

The tears rolled down my face.

I’d thought I was alone but then I heard my daughter’s voice behind me.

“Mummy, why are you crying?”

I could have lied and told her I was fine; I’d just bumped myself and it hurt, or that I had something in my eye.

But at times like this, I think we have a duty to be as honest as we can with our children, in an age appropriate way.

She’s incredibly sharp, Little Miss E, my seven-year-old daughter. Nothing gets past her. She has an uncanny sixth sense of knowing when something’s up, no matter how subtle or secretive the grown-ups around her think they are being. If I hadn’t told her, she would have soon picked up on a snippet of conversation at school or seen it on a newspaper billboard or something. I didn’t want her hearing half-truths or rumours at school, getting upset and not being able to talk about it.

Little Man O is five and although he is a confident, energetic boisterous little boy, he is incredibly sensitive too. I would hate to think of him being at school scared and worried and not having his mummy or daddy to answer his questions.

As much as I would love for them to remain in that innocent bubble of childhood (the bubble their little brother is blissfully in) hiding things like this from them won’t do them any good in the long run.

Far better to take control of the situation and tell them the facts in a safe and comfortable environment so they can get all the answers and comfort they need.

And so I took a deep breath and told them best I could, in words they would understand, that something terrible had happened in Manchester.

That people had died in an explosion at a concert. Children and grown-ups. That someone had done this deliberately and that it was terrorist attack. Sadly it’s a word they already know. I cried with every word I said as I watched their little faces crumble

I told them it was okay for us to be upset.

He said it must have been so scary for the people there.

And then came the questions.

“Did the singer die?”

“Did the person who did it die?”

“Did anyone we know die?”

“How many children died?”

“Mummy, why did someone do that?”

How do you answer that? How on earth do you explain to your loving, beautiful, kind children why someone would deliberately go to a concert – a concert full of kids seeing their favourite pop star – purely with the intention of killing other people?

Because I truly don’t know.

How can you explain terrorism to children when you don’t understand it yourself? Those were the words I wrote on Cardiff Mummy Says after the Paris attacks and I’m still no closer to understanding it.

As I cuddled the two of them, Toddler Boy I, my three year old bundle of energy, came running into the room with his toy Batmobile.

“Good guy, good guy,” he shouted, pushing his car along the floor, completely oblivious to what had happened but lifting the mood for a moment. He adores everything superhero and everyone is either a good guy or a bad guy.

It was a timely reminder that while there might not be a real life Batman swooping in and saving the world, at times like this, when we don’t know what else to do, we have to remember the real life “good guys”.

In the poignant words of Fred Rogers,

“When I was a boy
and I would see scary things
in the news,
my mother would say to me,
‘Look for the helpers.
You will always find
people who are helping’.”

I told my children that there were incredibly brave people at the scene who were doing everything they could to help. People at the concert helping other people. The staff at the venue. The police men and women. The paramedics and hospital staff. Taxi drivers ferrying people to safety. People in Manchester offering a place to stay to those stranded in the city.

While they’ve been at school, more and more reports of kindness are filling up my newsfeed. The woman who lead 50 scared and confused children to safety at the nearby Holiday Inn; the homeless man begging in the foyer of the venue who rushed to help and who held one of the victims in his arms as she died. The JustGiving appeal which, at the time of writing, has already raised more than £220,000 for those affected by the attack.

Because when the very worst of humanity rears its ugly head, we have to remember that we also see the very best of it too.

I know I’m not the only one who has spent today in a state of utter disbelief; shocked to the core by what has happened and struggling to function. I told my friends in a message group that I had been crying and they pretty much all said the same. Two of them knew people at the concert. Thankfully they are okay. We can’t possibly know how it feels for those who were there, or for those who have lost loved ones. But that doesn’t mean we can’t still feel sad, upset, shocked, confused, angry. Maybe even frustrated because we don’t know what to do.

We can donate money, we can donate blood, we can share on social media, we can attend vigils (5.30pm today outside the Senedd in Cardiff Bay), we can stand in solidarity. We can vow to carry on our lives as usual and not let ‘them’ win.

And we can breath. The yoga teacher in me is remembering that when all else fails, when we genuinely don’t know what to do, we can still take a deep breath, exhale a little love and compassion into the world, and trust it will get to someone who needs it right now.

Manchester, you are in our thoughts.

If you’re not sure how to talk about the attack in Manchester, this Newsround broadcast is a good place to start. Winston’s Wish, a charity for bereaved children, also have this advice, which was written in response to the Westminster attacks but (sadly) just as relevant now.

An earlier version of this post featured a meme I have now discovered was created by a far right hate group. I’m usually pretty hot at detecting ‘fake news’, but my guard seemed to be down today as I had seen this particular image being shared by trusted sources. I am grateful to the reader who pointed it out to me.