Little Miss E was about three years old when we started giving her pocket money.

We had been shopping for a few bits and pieces and she’d stopped to look at a beautiful soft white fluffy bunny rabbit toy.

“Please can I have this, Mummy?” she’d asked.

“No,” I replied before I’d even thought about it.

“But please?” She pleaded with me. “I’ve been really good and I really, really love her.”

She didn’t cry. She didn’t tantrum. But her whole face looked completely heartbroken.

As we drove away from the shop, her barely saying a word, I felt terrible. It occurred to me that perhaps I was being a little unfair to my daughter. Other than Christmas and her birthday, which is also in December, we don’t really buy her many new toys and she isn’t lavished with gifts by relatives or friends.

She never really asks for much, even now, and definitely isn’t one of those kids always pestering us for the latest toy. But that day, it suddenly hit me that she had no way of obtaining any items for herself, other than if she caught Cardiff Daddy or me on a particularly generous day and we happened to say yes. I realised that sometimes I’d say yes to things, such as a magazine or a new book, and other times it’d be a downright no, which was probably sending mixed messages to her. 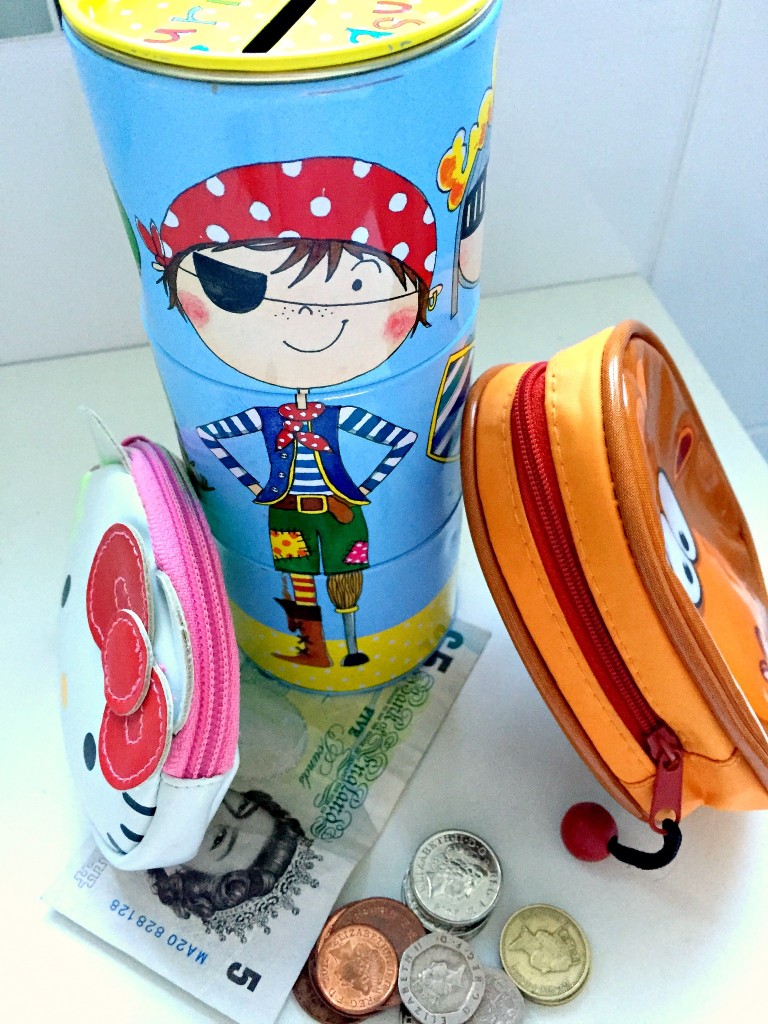 “We need to give her pocket money,” I said to Cardiff Daddy that night as I relayed the episode to him. His initial reaction was that she was too young, but we talked about it a bit more and decided that we’d give her £1 every week.

We explained to her the concept of pocket money and how she could use it to save up for things she wanted. We also said we’d give £1 a week to Little Man O, her younger brother. He was only about 16 months old at the time, but we thought it would help her understand it more if he also had to save up for things he wanted, rather than having one rule for her and one rule for him. We figured children are never too young to be introduced to the idea of financial independence, saving up, and instant gratification versus long-term goals, and it wouldn’t be long before he’d grasp the concept himself.

And so, that Saturday, we presented them both with a shiny gold £1 coin and got them to put their money in their money boxes. They thought it was brilliant fun and loved hearing the money boxes rattle with their coins. Over the coming months, Little Miss E saved her little heart out. She’d occasionally see other things she wanted in the shops and I’d explain to her that she could use her pocket money to buy them, but it would mean she would have to wait even longer for her fluffy rabbit. A couple of times she spent a pound or two on something small, and eventually, with the help of a £5 Easter present from her grandparents, she had enough to afford the rabbit.

Thankfully, I’d been keeping a close eye on the Laura Ashley website, where she’d spotted the rabbit, and knew they were having a 25% off sale that week. She counted out her coins, handed them over to the lady in the shop and was so happy with her new purchase, I thought she might cry. White Bunny, as she is called, slept next to her for months. She still sits at the bottom of Miss E’s bed, and I often remind her how hard she saved up to buy her. 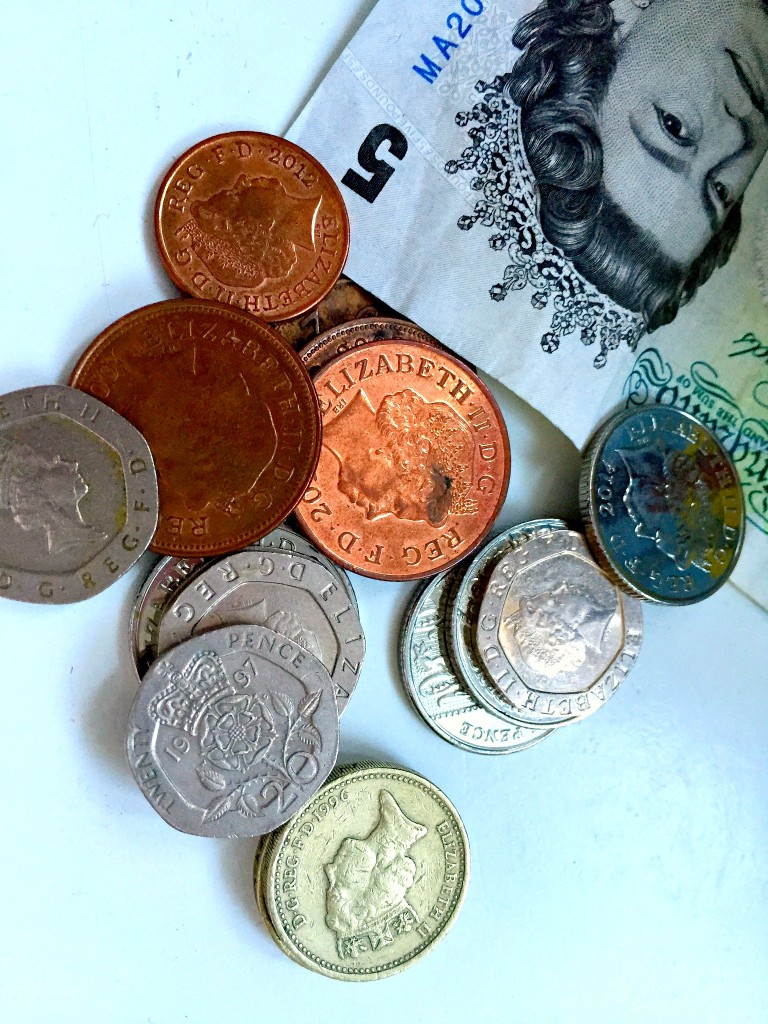 She’s bought a few big purchases herself since then, as has Little Man O, and I’m so proud of how they have embraced the concept of saving up for special things, thinking hard about whether to purchase something on a whim or keep on saving towards their goal. We do buy them occasional treats too – I want them to understand how nice it is to treat people you love, to understand giving and receiving. And at the end of the day £1 isn’t going to get them that far!

That said, it all adds up. Every few months, they proudly take a few coins to the bank to deposit into their accounts. My children are certainly in the minority among their peers in receiving pocket money. I know some people might think three, or even five, as Miss E is now, is far too young for pocket money – but I would disagree. Both my children have a real understanding of money and saving, that different coins have different values and so on.

At the moment, there aren’t any real pre-requisites to getting their money. If they’re being especially naughty, we can withhold it, although this is a final option for us as I don’t want them to only be good to get money. I know other families give pocket money to children on the condition of them doing household chores. I’m undecided on this one personally, as to me, being part of a family involves everyone taking responsibility for the house. No one pays me to tidy up (I’d be loaded if they did!), so why should they get money for clearing away after themselves? Surely it should be a given. That said, I like the idea that pocket money, like wages, should be earned; I think it’s good to learn from a young age that money doesn’t just magically appear. Perhaps as they get older, we’ll distinguish between tasks that are expected to be done regardless (such as cleaning their rooms, putting their toys and clothes away), and additional tasks that warrant payment; cleaning the car, for instance, or the inside of the windows. I’d gladly pay someone to do those chores!

I try not to interfere too much in how they spend their money. If they desperately want to buy some cheap tat, I’ll remind them of the big thing they are saving up for, but I let them make the ultimate decision. I want them to make those mistakes now, while they are young and the purchases don’t matter, rather than growing up without any idea on the concept of money.

I had friends when I was in my 20s, who got themselves into all kinds of debt with store cards and overdrafts. One of them told me she’d never really had any kind of financial responsibility or independence until she got to university and she wasn’t equipped to deal with it at all.

In contrast, I remember getting 20p a week pocket money from my parents from a really young age and the thrill of opening my first bank account, aged 7. My Grandma also used to give me and my brothers a money bag filled with coppers each Saturday morning, and we would have to share out the 2ps and 1ps between the three of us. It was usually only about 15p each, but it taught me a lot about saving. She always used to say to me, “Look after the pennies, and the pounds will look after themselves.” My Grandma died when I was 16 but it’s a motto that has stuck with me my whole life and one I want to pass down to my children too.

Little Miss E recently spent £3 on a Tsum Tsum, those little stackable fluffy characters from The Disney Store that are the new big thing this summer. She didn’t have her purse with her, so I subbed her the money. When we got home, I made sure she handed me the £10 note she’d had as a Christmas present, and I gave her £7 in return. “But I want the paper money,” she cried, as I tried to explain that the only way to get the crisp note back was to take her toys back to the shop. I told her that in three weeks’ time, when she had three more pound coins, I would be happy to change them for a £10 note, but until then she’d have to wait.

We had another little lesson on the value of money a few months ago too, when Little Man broke his sister’s hair band on purpose. As it was such a deliberate act, and he’d been warned to stop bending because it could break, we told him he had to pay for a new one for her out of his pocket money. And so Cardiff Daddy took him to the shop, made him count out the coins from his purse and hand them over to the lady on the check-out.

Yes, it’s a harsh lesson to learn when you’re only three – but hopefully it’s something he won’t be forgetting in a long time.

What age did your children start – or will they start – getting pocket money? Do they have to do anything to earn it? I’d love to hear your thoughts in the comments below, on the Cardiff Mummy Says Facebook page or you can tweet me on @cardiffmummy