Being the youngest of three, with a big brother, and big boy cousins, Toddler is a real hand-me-down kid. His jacket, helmet, and jeans in this photo are are all pre-loved, and his Mini Micro Scooter was originally his brother’s. It doesn’t make any difference to him though, and I love being able to re-use everything – it’s cheaper and better for the environment, for starters.

However, I always feel so pleased for him when he has something new, something that is just his. Like his new Timmy T-Rex Scootaheadz. It was sent for us to review, and Toddler looked so pleased when he realised it was for him and that his big brother and sister didn’t have one. 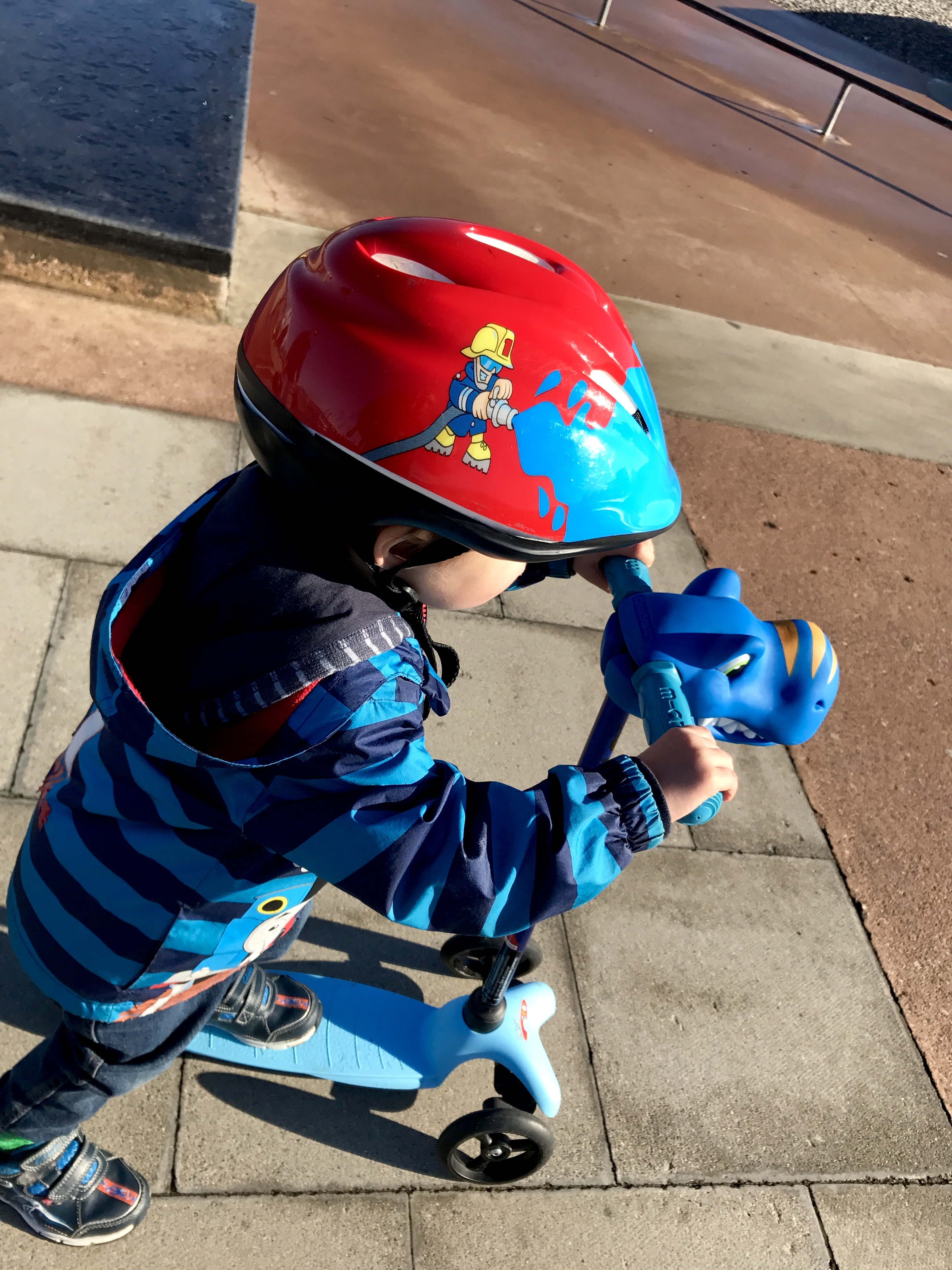 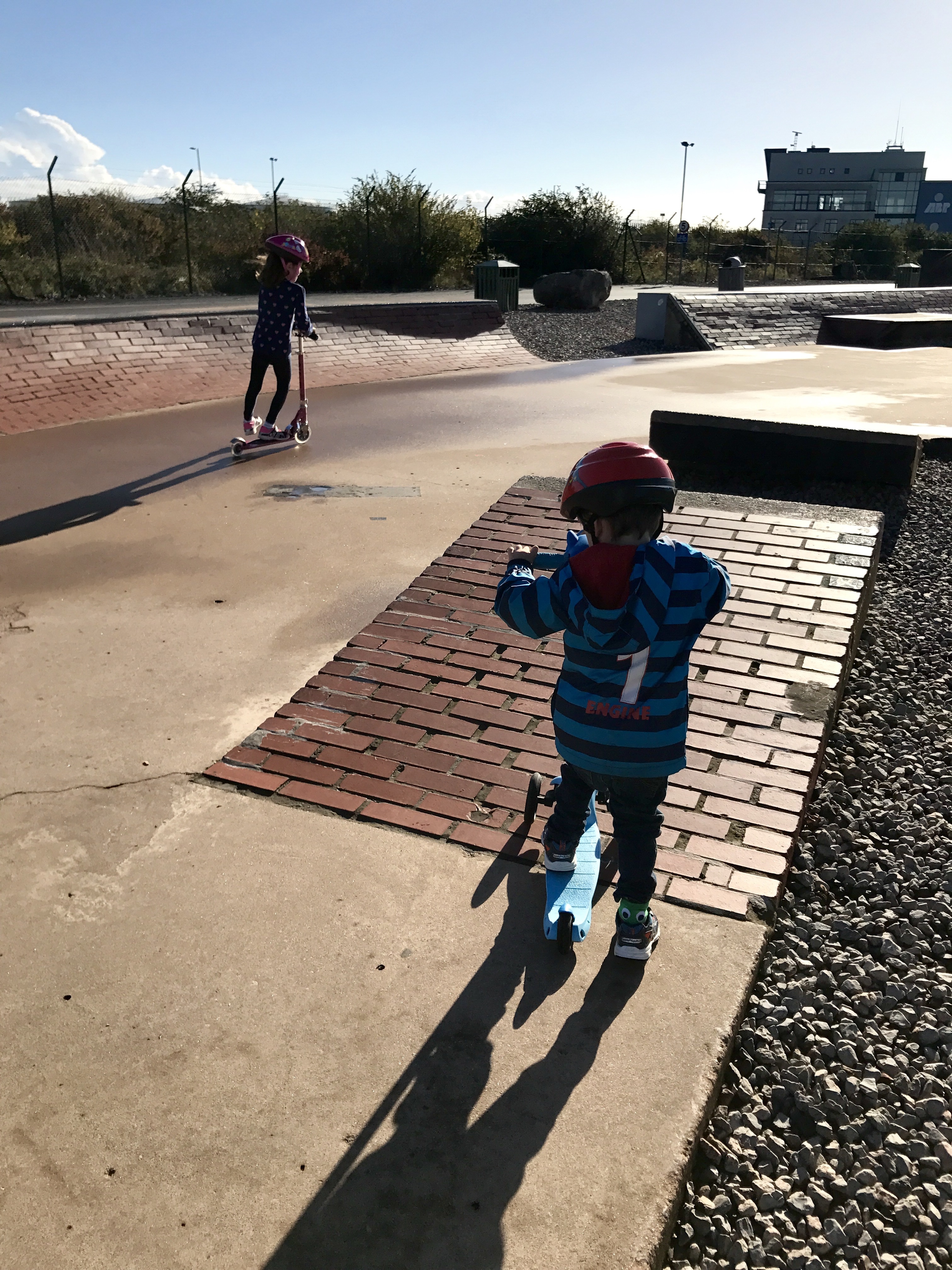 Priced £14.99, there are seven different characters, including a pony, unicorn and shark. They slot on really easily over the T shape of the front of the scooter, by using your fingers to widen the gap at the back, at room temperature or warmer. However, we did need to separate the plastic handle covers to make room for it. 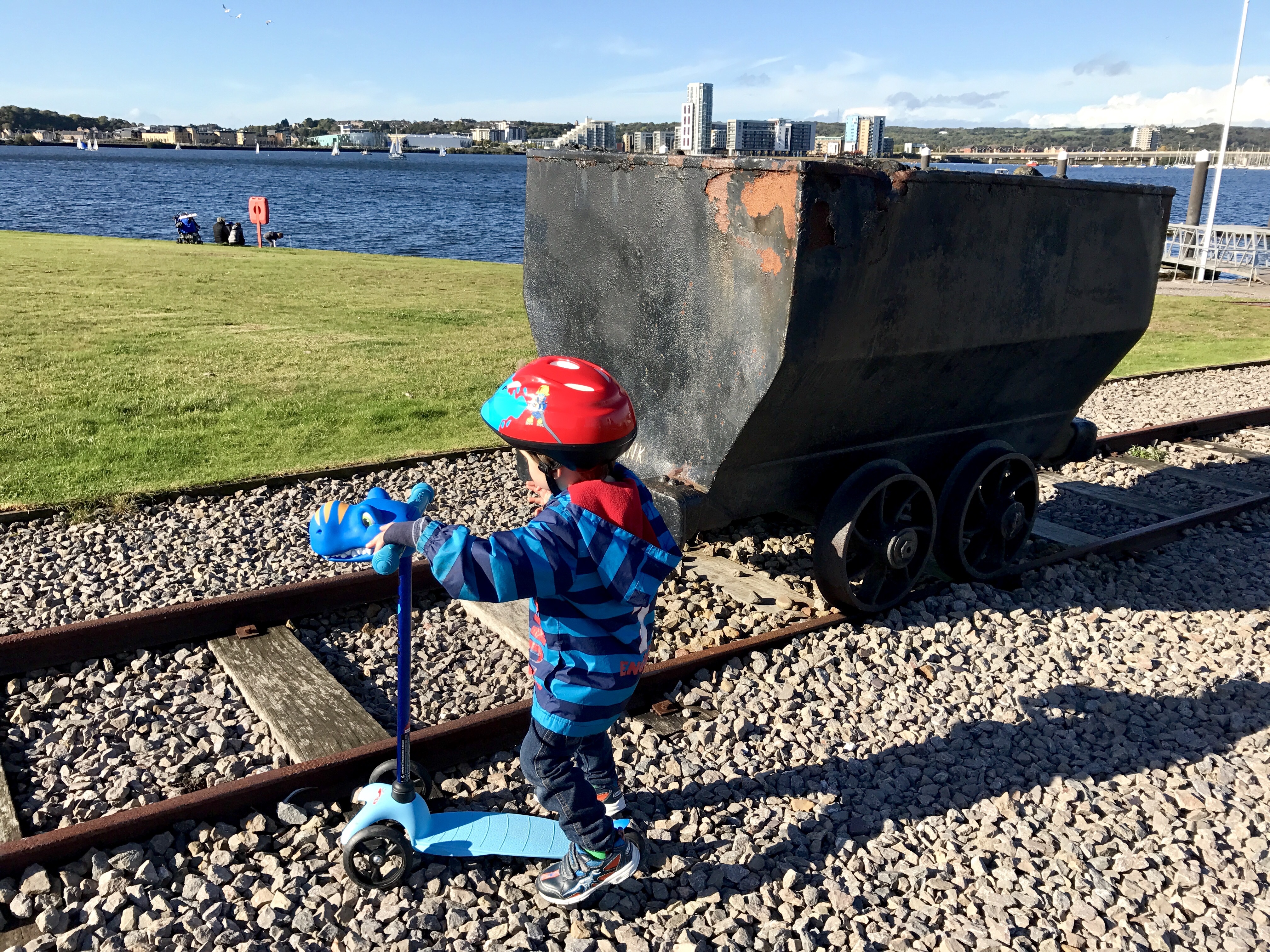 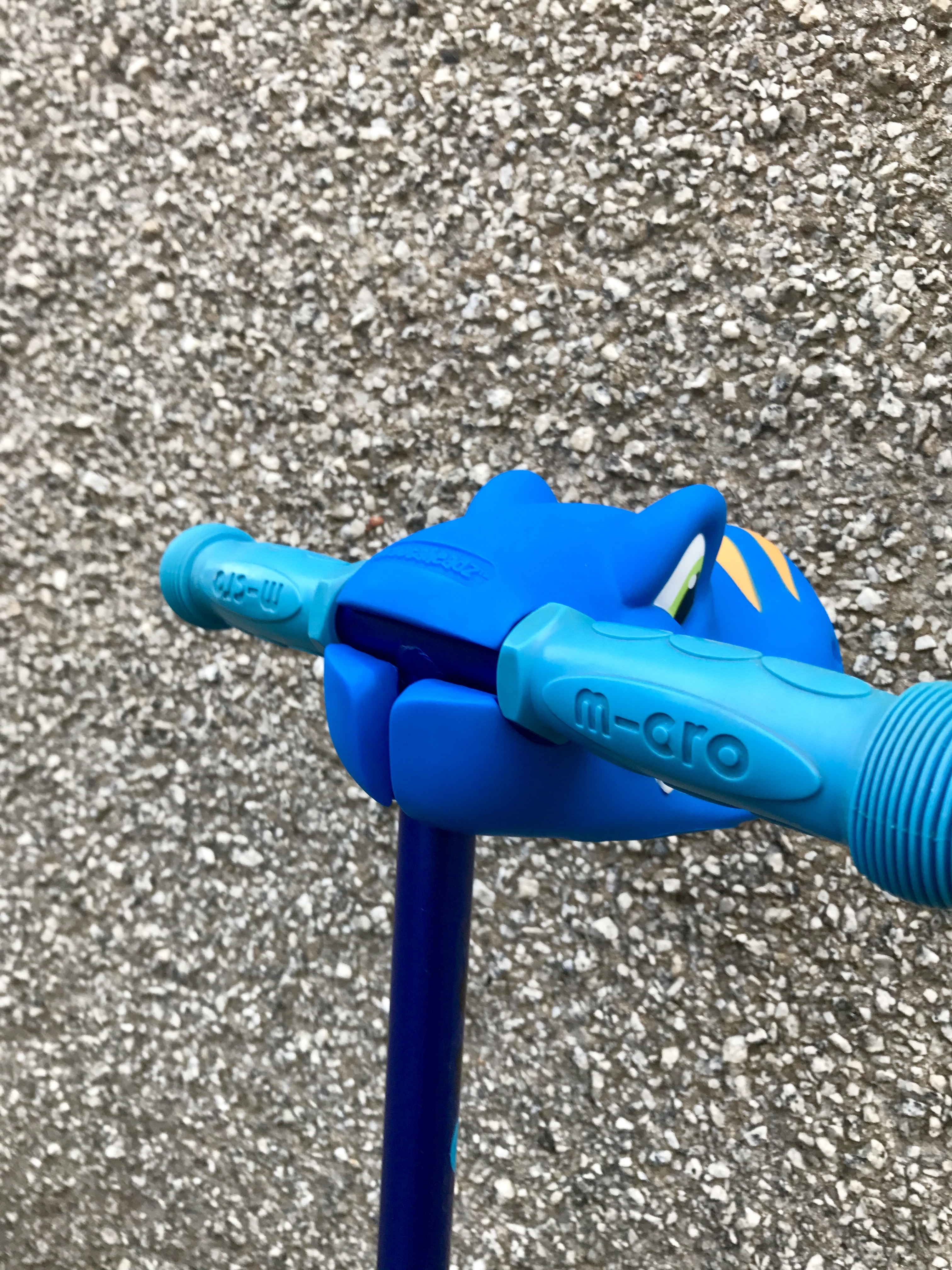 It’s made from a firm but slightly squishy plastic and is proving very robust, having been put to the test in the parks and pavements of Cardiff over the last few weeks.

Timmy’s latest outing was to the skate park on Cardiff Bay Barrage (you can read about a previous trip to the barrage in more detail here). We headed there early on Sunday morning, making the most of the autumn sunshine and the fact all the bigger kids were probably still in bed.

Being the youngest child, Todder has been scootering since he could walk, so he’s really confident whizzing around the jumps and ramps. There are a few areas which were too tricky for him, and Cardiff Daddy and I took it in turns to shadow him around he park. He had one or two falls, but generally did a good job of giving his siblings a run for their money around the skateboard park and the barrage itself. 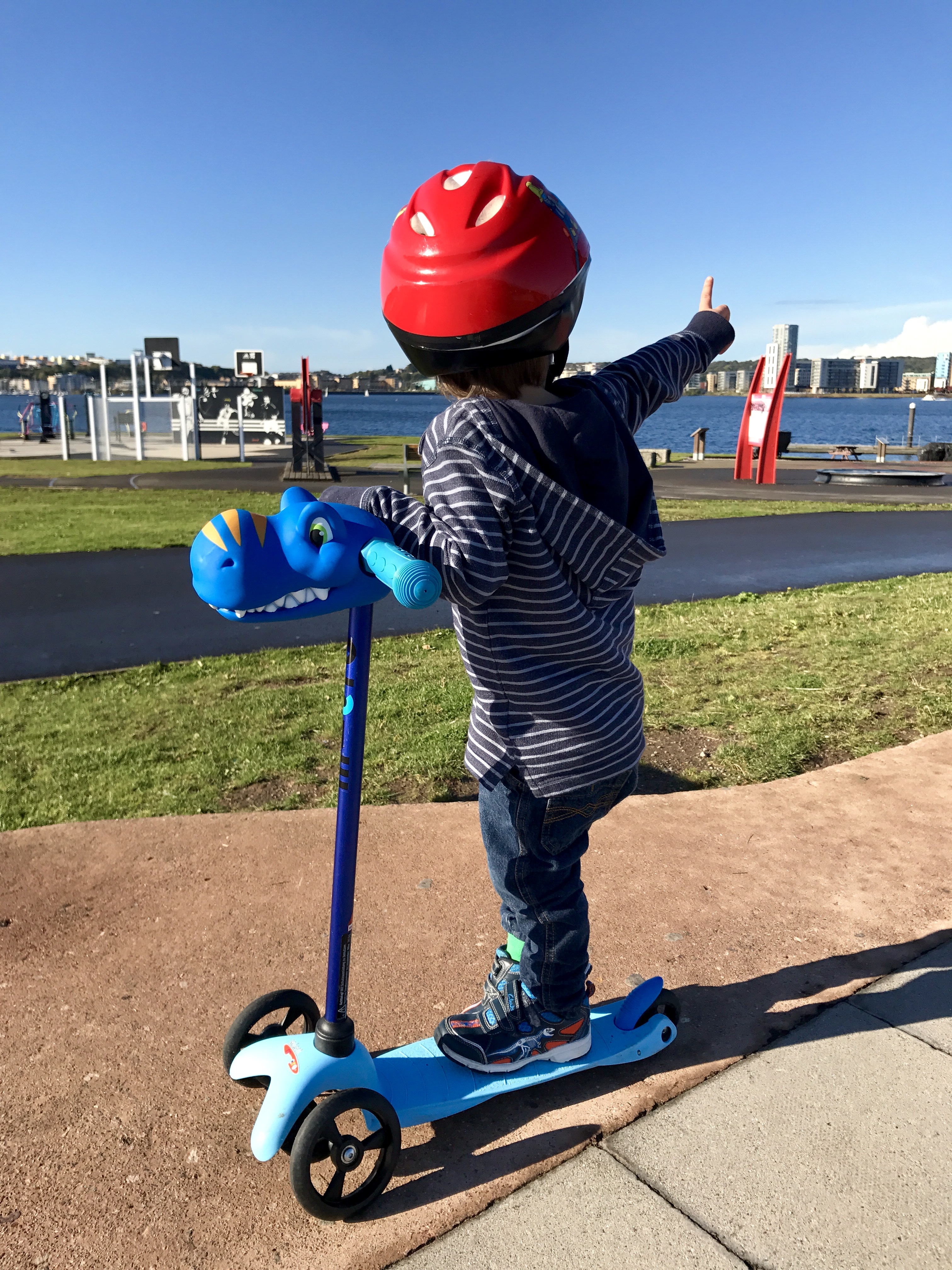 The T-Rex has also been on the school run, around the block, Roath Park, Heath Park in Cardiff and Romilly Park in Barry, not to mention having its teeth cleaned by Toddler on a daily basis and being fed pasta! It’s a good job it’s easy to wipe clean.

Timmy certainly gets a lot of attention when we are out and about, and we’ve had a few people ask where they can get one (links below, in case you are wondering!). Perfect for my dinosaur-loving two and a half year old, this would be a great Christmas present for any child who already has a scooter they love or anyone getting a new scooter from Santa to add a personal element.

Do you have a Scootaheadz? Let me know in the comments section below, on the Cardiff Mummy Says Facebook page or by tweeting me on @cardiffmummy

* I am a member of Amazon’s affiliate scheme