Like great big huge cars, with deafening engines, wheely-ing around a stadium on a Saturday afternoon.

Six years ago I would have been the last person you’d have found at such an event. But, in an attempt to embrace my children’s love of such monster machines, we went to Monster Jam at the Principality Stadium today*. I think I loved it just as much as them.

Before the main event, there was a ticketed Pit Party for fans to meet and greet the 12 cars racing in Cardiff and their drivers.

The queues to meet the drivers were huge. They’re worldwide celebrities and this was the only UK date on the current world wide tour, so the stadium was full of die-hard fans dressed in all the gear excited to meet their heroes. 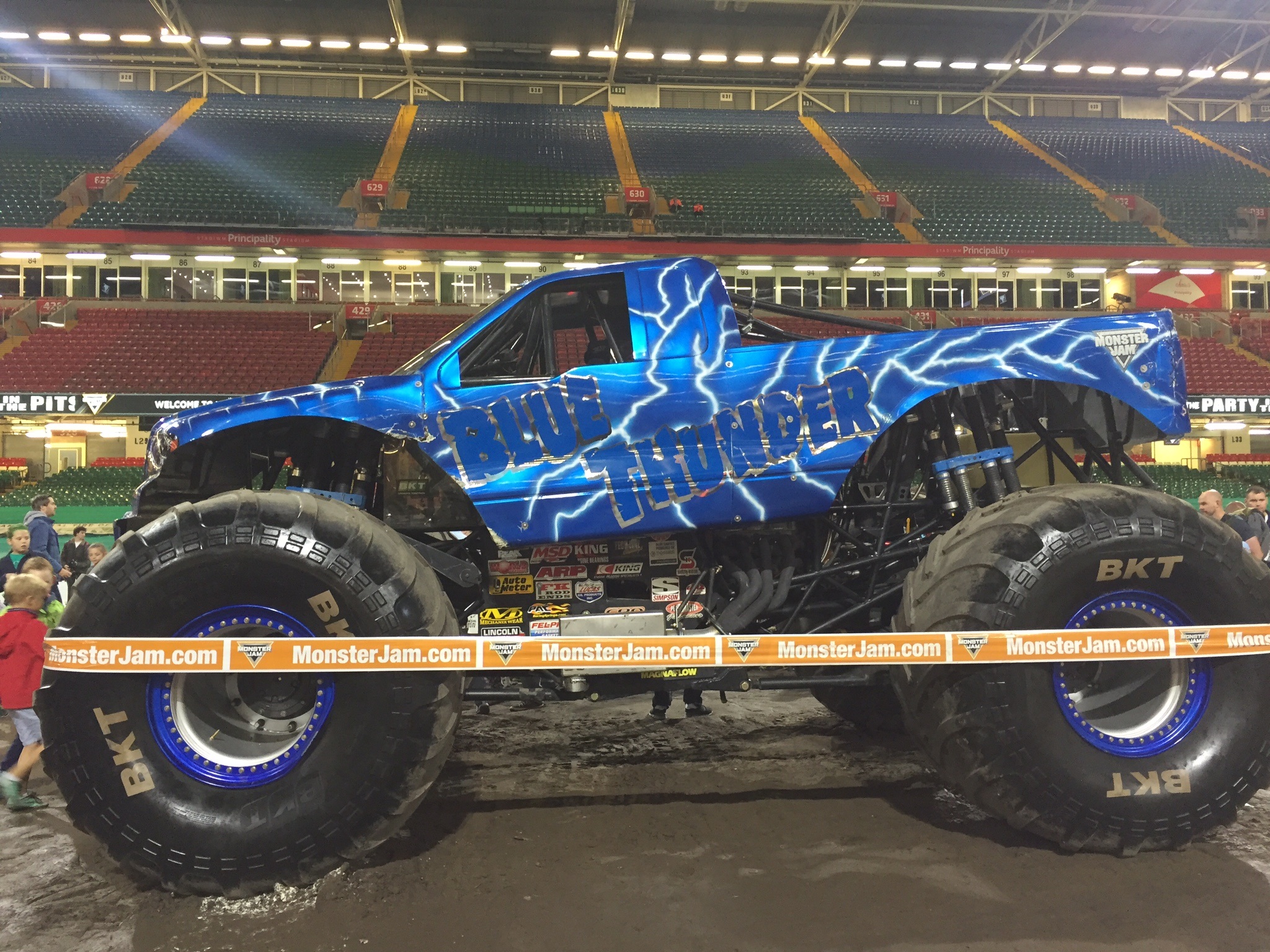 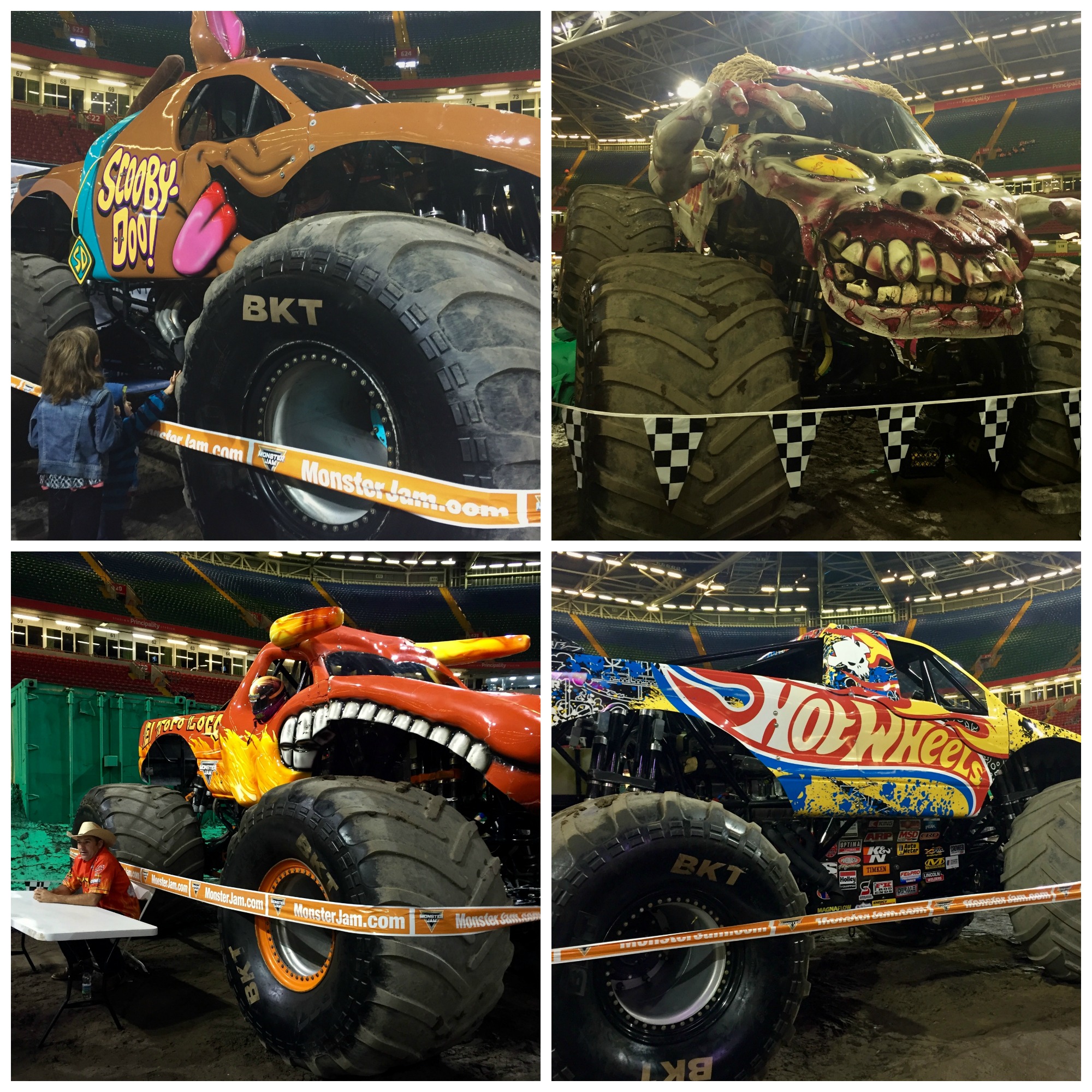 Some of the trucks we met in the Pit Party 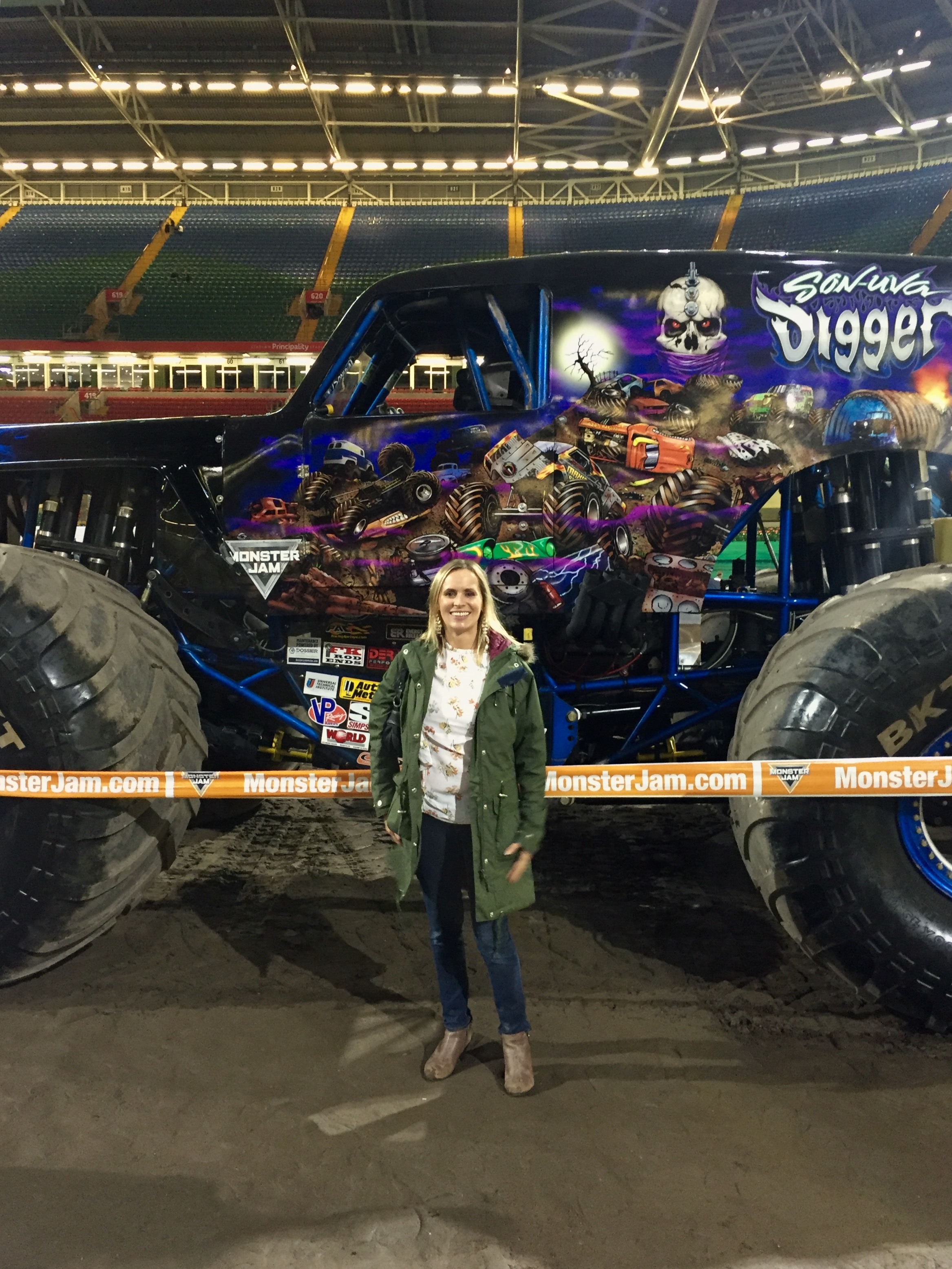 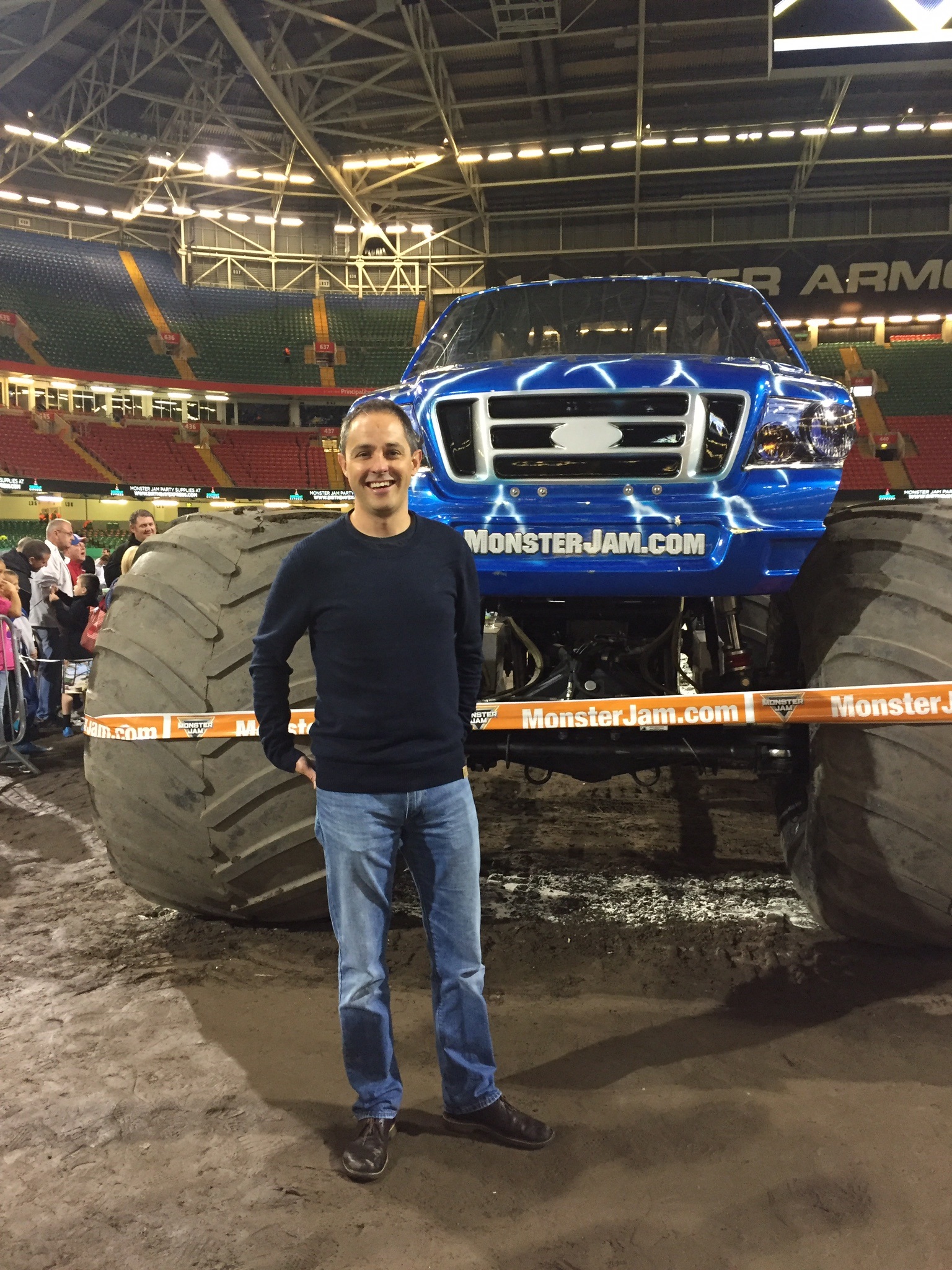 My children were happy enough just to marvel at the cars and the motorbikes. As you can see from the photos, even the wheels were bigger than the average person, which gives you some idea of their size.

In fact, the trucks stand four metres tall and four metres wide, with tyres 1.7m tall, and weigh up to 4,500 kilograms. They can reach speeds of up to 110km per hour and jump as far as 130ft.

The main show was split into four sections – the racing championship; the stunt motorbikes; paired wheelie competitions; and then a free-wheeling session for the drivers to really show off their stunts and tricks. 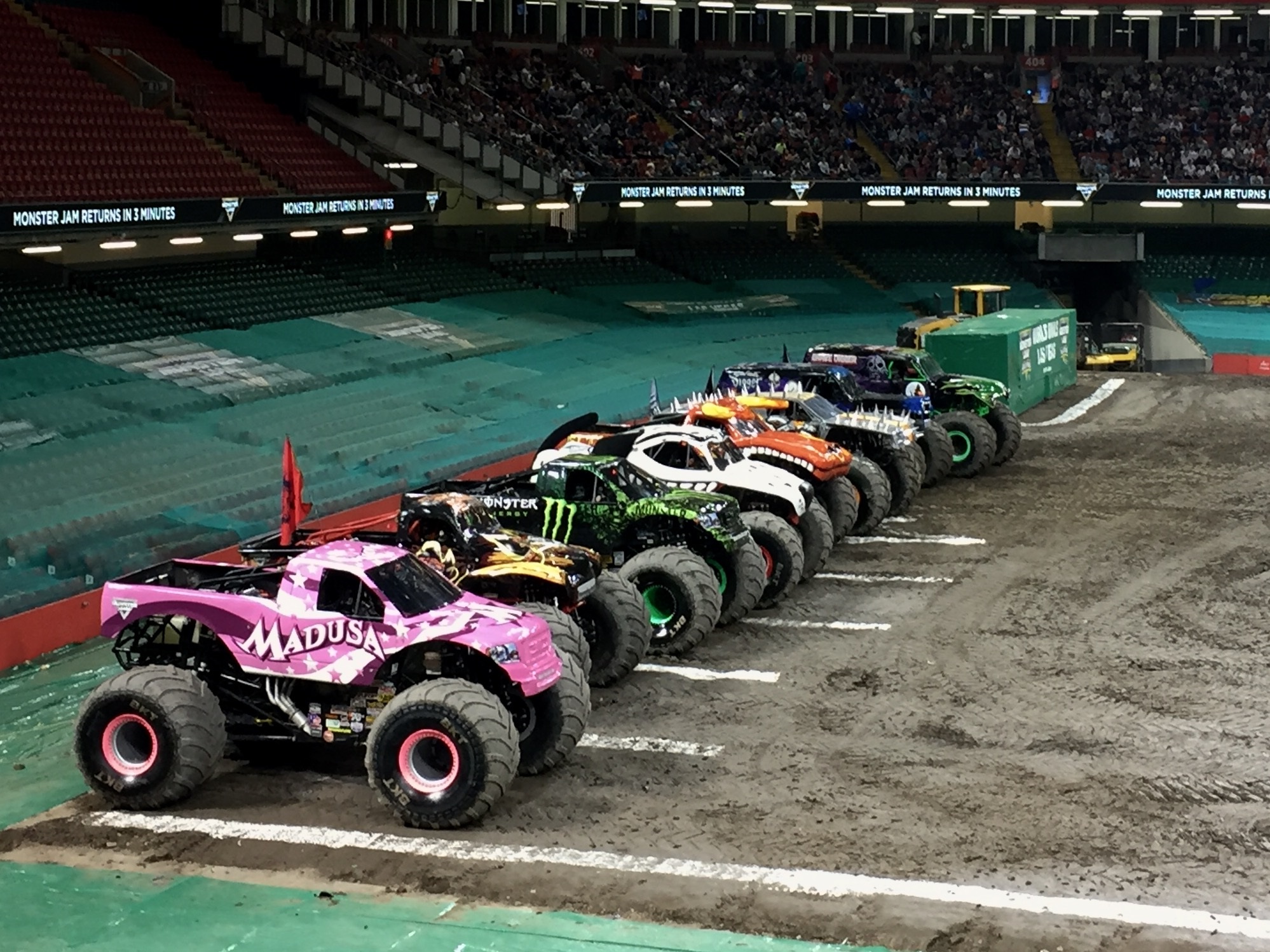 After several knock-out rounds of racing, which saw pairs of cars whizzing around the track and jumping off a couple of ramps, Son Uva Digger (a relatively new car, unveiled in 2011 as a next generation off shoot of the famous Grave Digger truck), driven by Ryan Anderson (son of Dennis Anderson, the four-times world champion who created Grave Digger, and brother of Adam, also a champion driver) emerged victorious. He thanked everyone for being there, then told us, “I didn’t come here to race; I came to run this truck into the ground for monster jam free racing.” But more of the free racing later. 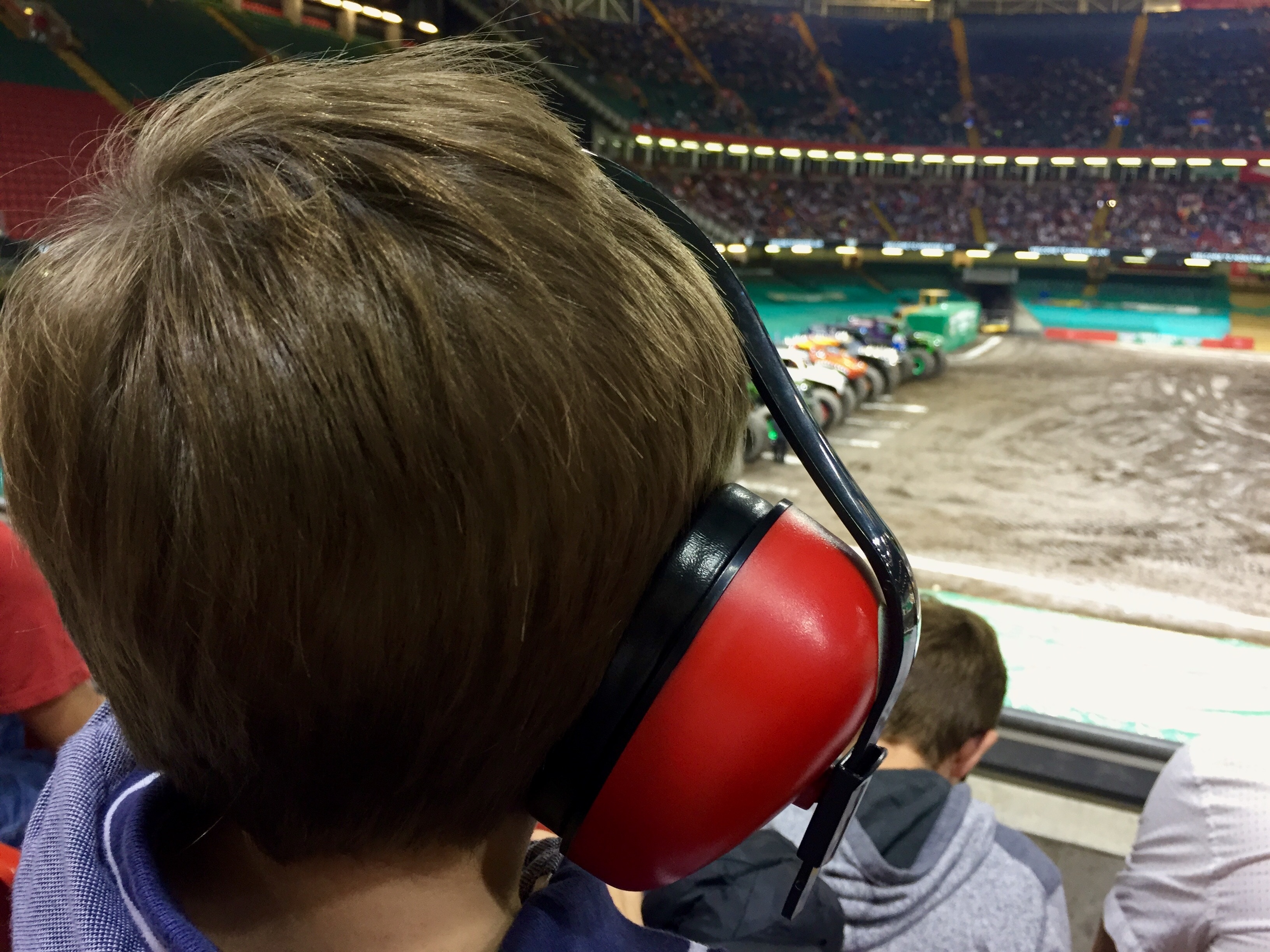 We’d been advised by friends to take ear defenders – and I’m so glad we did. With the stadium roof closed, the noise was painfully loud. I saw reports on social media of children crying in the corridors because it was so loud, which is a real shame. Perhaps there could have been more explicit information on the website about this when booking as some people were saying they didn’t realise how loud it would be.

The bikes left me open-jawed, as they drove up ramps and leaped through the air before landing. Even more so when the riders started letting go and jumping around in mid-air, and then doing somersaults with the bikes. Utterly amazing!

The wheelie competition saw pairs of cars duelling to perform the best wheelies, with the audience cheering for the winner in each pair. At one point, two of the cars were facing off against each other, growling their engines. I loved the entertainment element of Monster Jam, with all the cars having their own personalities.

Finally, it was on to the freestyle part of the show, where each driver had a couple of minutes to do their best to impress the judging panel made up of six lucky competition winners. 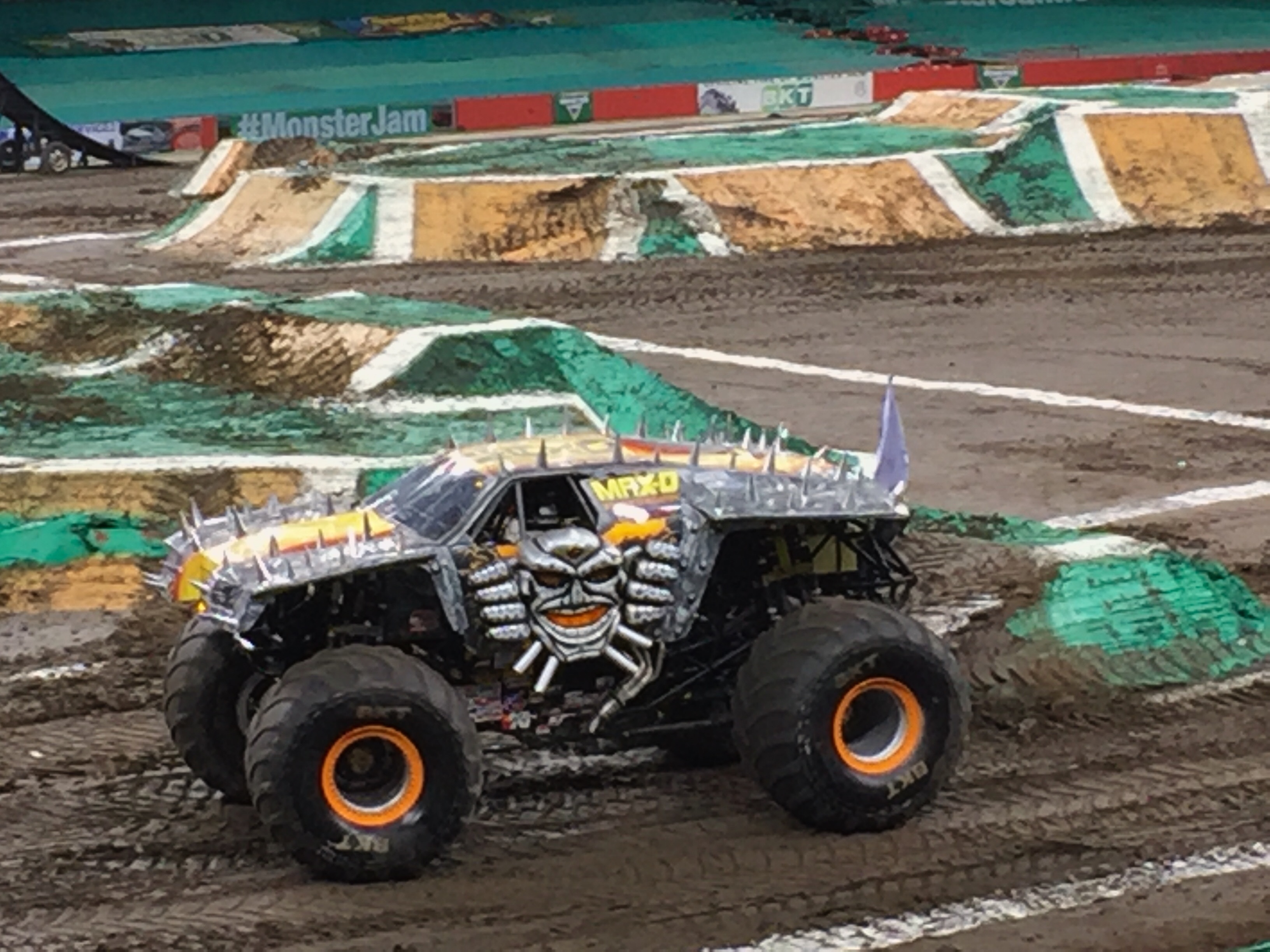 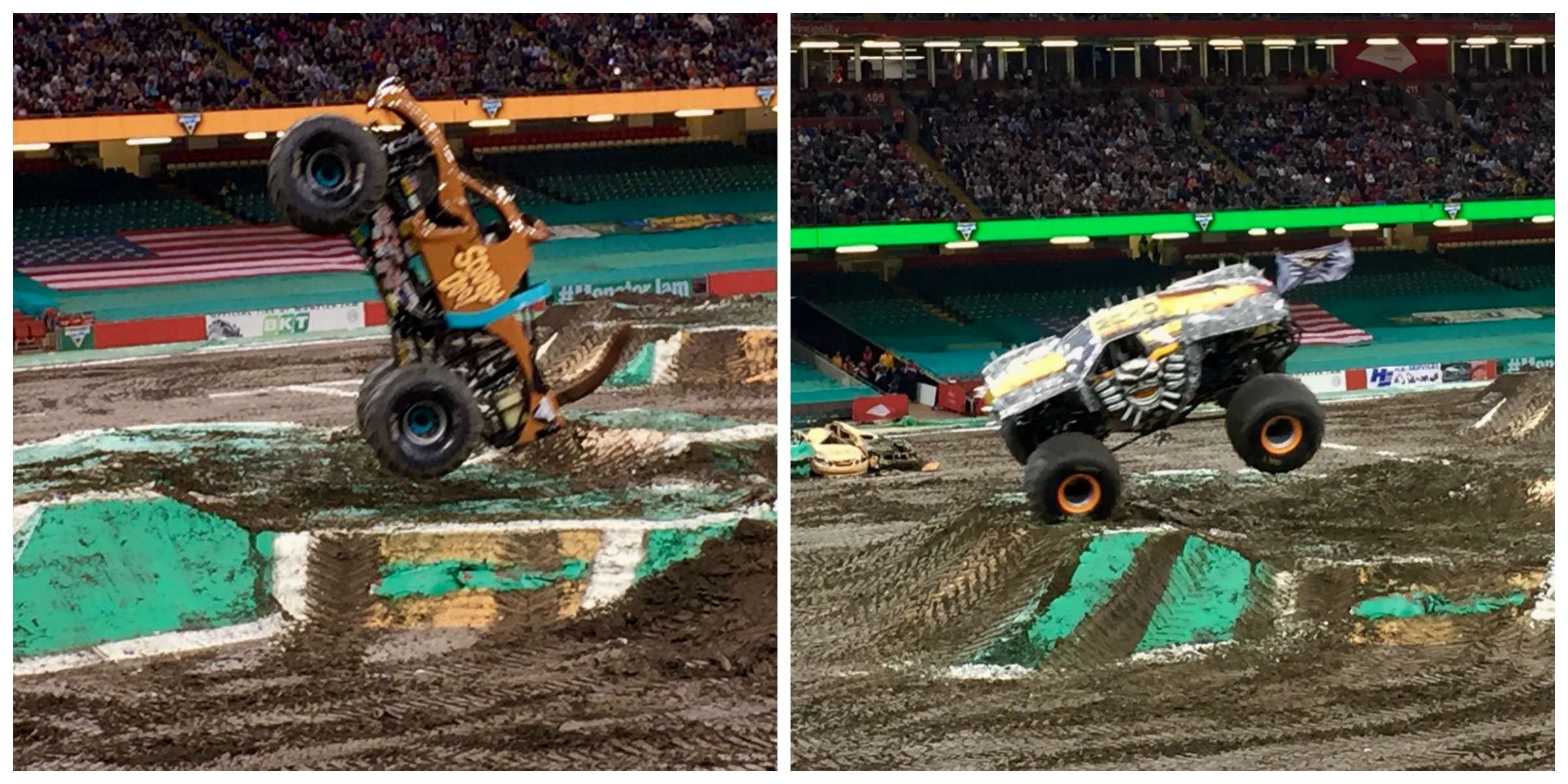 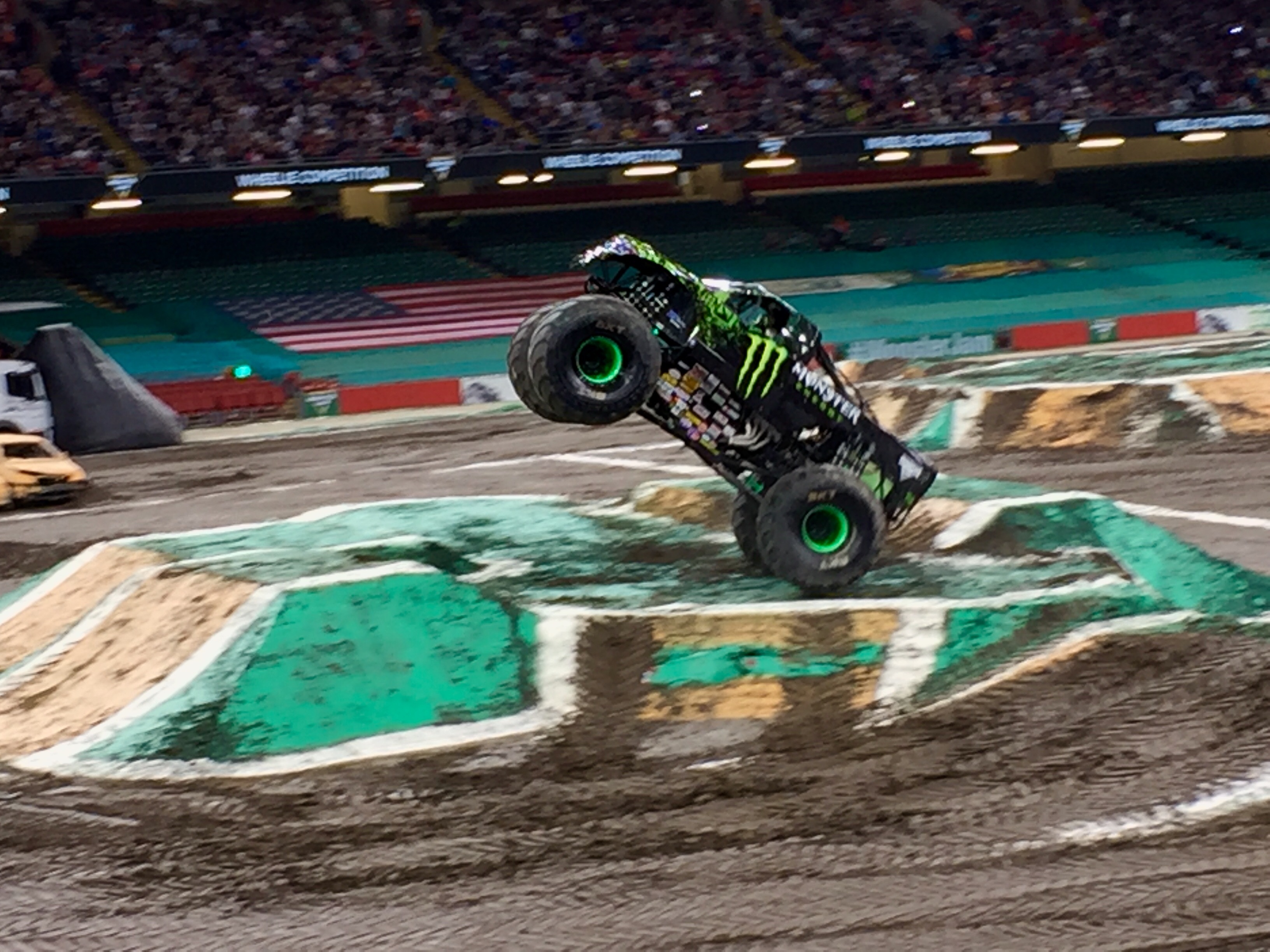 Captain’s Curse was in the lead for ages – until Son Uva Digger came along and wowed us with a routine including a couple of back flips. His car got stuck upside down at the end, but luckily he emerged unscathed, and got all 9s and 10s on the score cards. He was the eventual winner of this part of the tournament too. 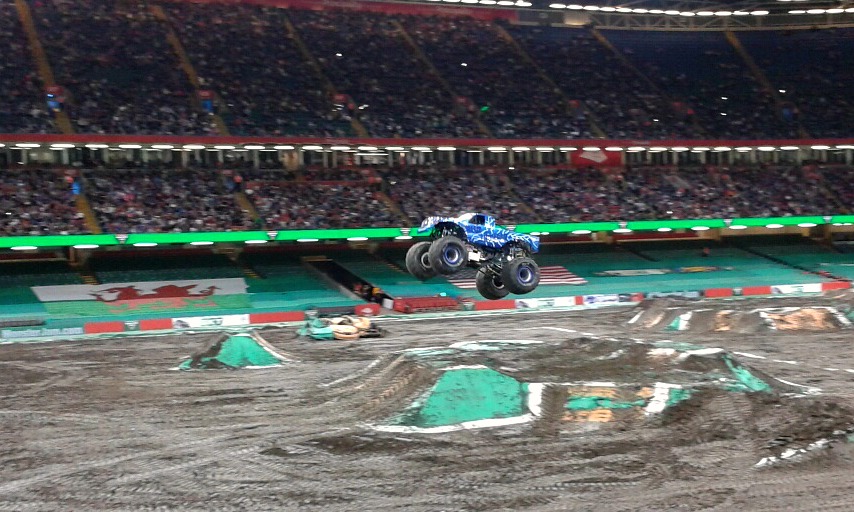 Last to compete was Grave Digger, one of the most famous and influential monster trucks. This truck ending up toppling over too after some ambitious wheeling, bursting a wheel in the process. A tow truck managed to pull Grave Digger up enough for the driver to get out, but the wheel was well and truly flat and as we left the stadium, it was still lying on its side. 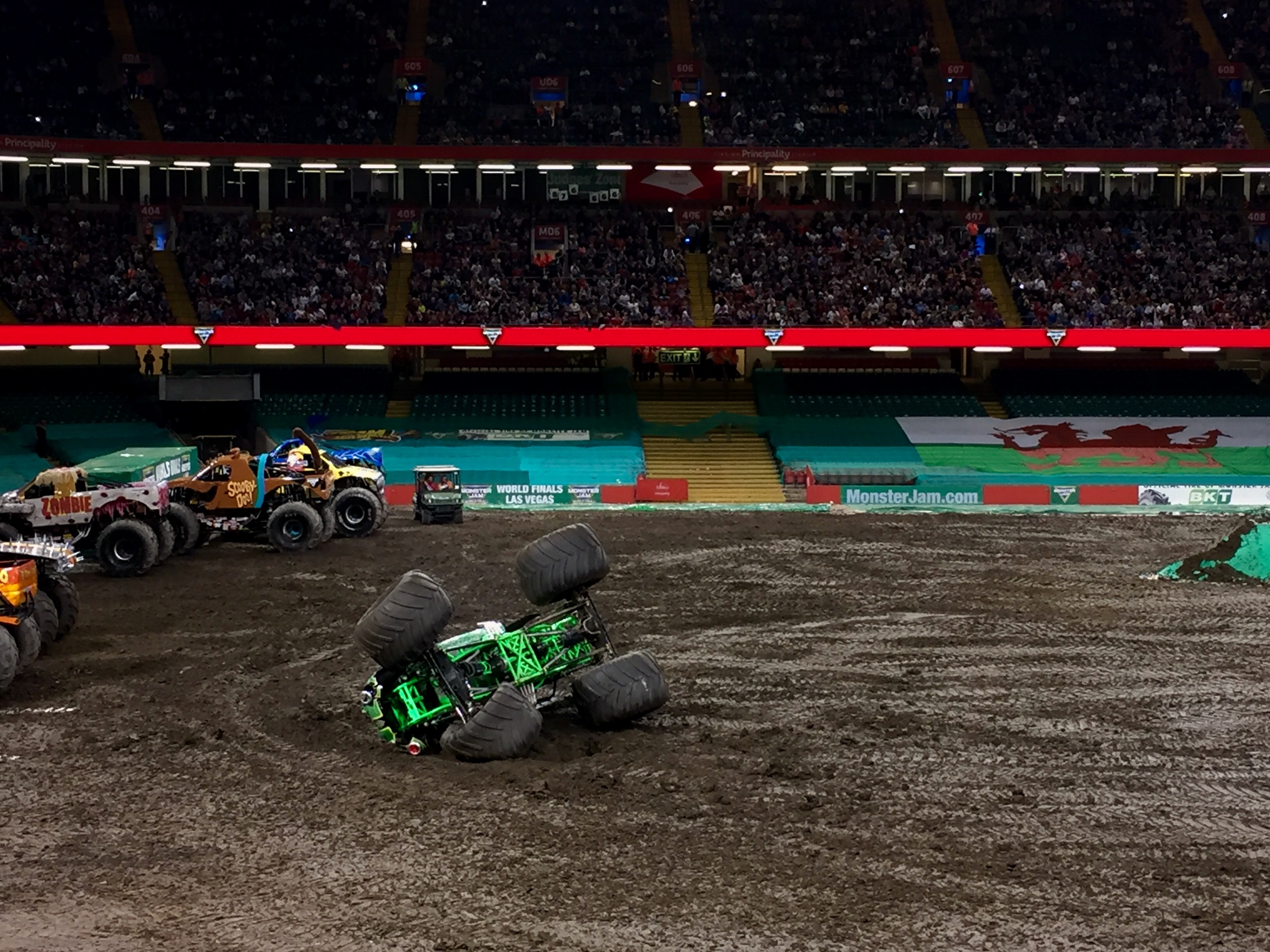 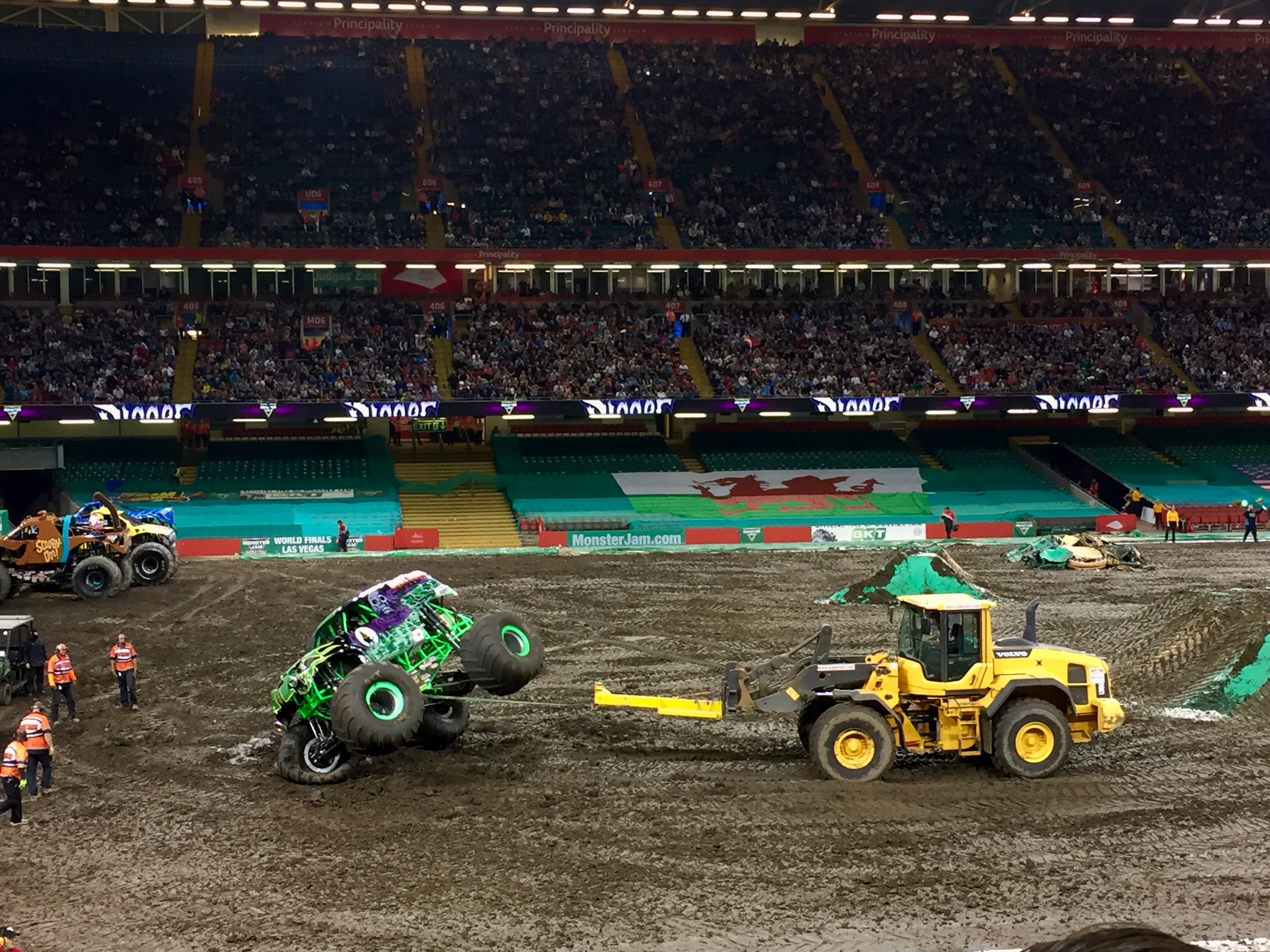 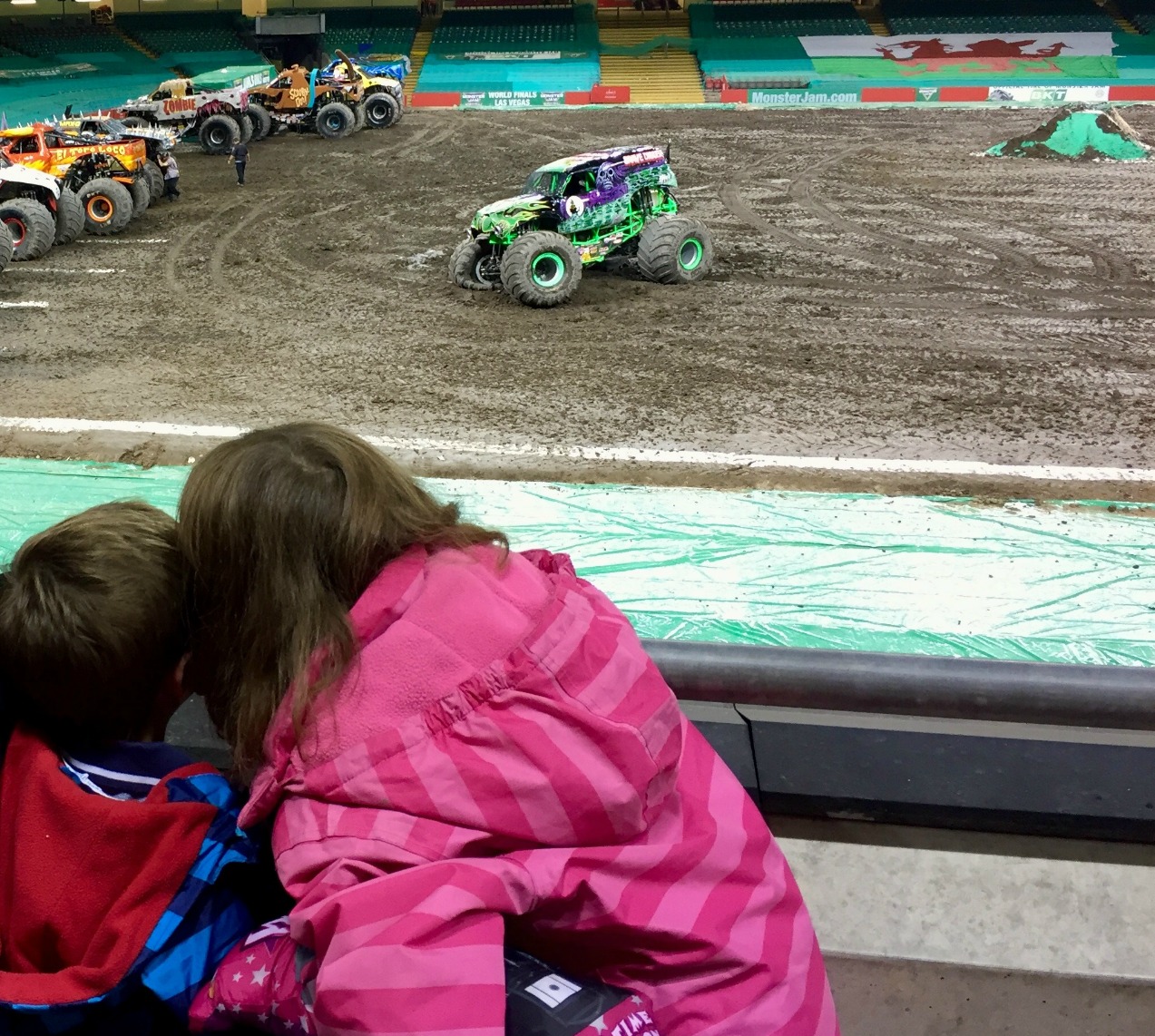 It can take up to 1,500 hours and 300 truck loads of dirt to create the track for Monster Jam – so I can only imagine how long it’s going to take to clear up the stadium after this afternoon’s event.

Still, it will be worth every moment.

Monster Jam is fast, exciting, jaw dropping entertainment. I entered the stadium indifferent to monster truck racing, but left completely in awe of what I had witnessed and wanting to see more.

Were you at Monster Jam Cardiff? Let me know what you thought in the comments section below, on the Cardiff Mummy Says Facebook page or by tweeting me on @cardiffmummy

*Thanks to Monster Jam for giving us review tickets for Party in the Pits and the main show.