National Theatre’s War Horse is an incredible piece of theatre; one of the most profound productions I have seen in a long time.

Based on the acclaimed 1982 children’s book by Michael Morpurgo, and adapted for The National Theatre by Nick Stafford, it is an emotional journey through World War One as seen through the eyes of a spirited horse called Joey, who is sold to the British Army and taken to France to fight against the Germans, and the attempts of 16-year-old Albert Narracott, his loving owner who runs away to war, to find him.

Following eight years on London’s West End and success on Broadway and internationally, War Horse is currently playing at Wales Millennium Centre until Saturday 28 July. Cardiff Daddy and I were kindly invited to review it last night, four years after it was last in Cardiff. Back then in 2014, my third child was a tiny newborn and, having heard so much about the show, I remember being disappointed not to have been able to see it. However, it was well worth the wait as last night’s performance was every bit as good as I’d been lead to believe, and more. I can’t stop thinking about it. 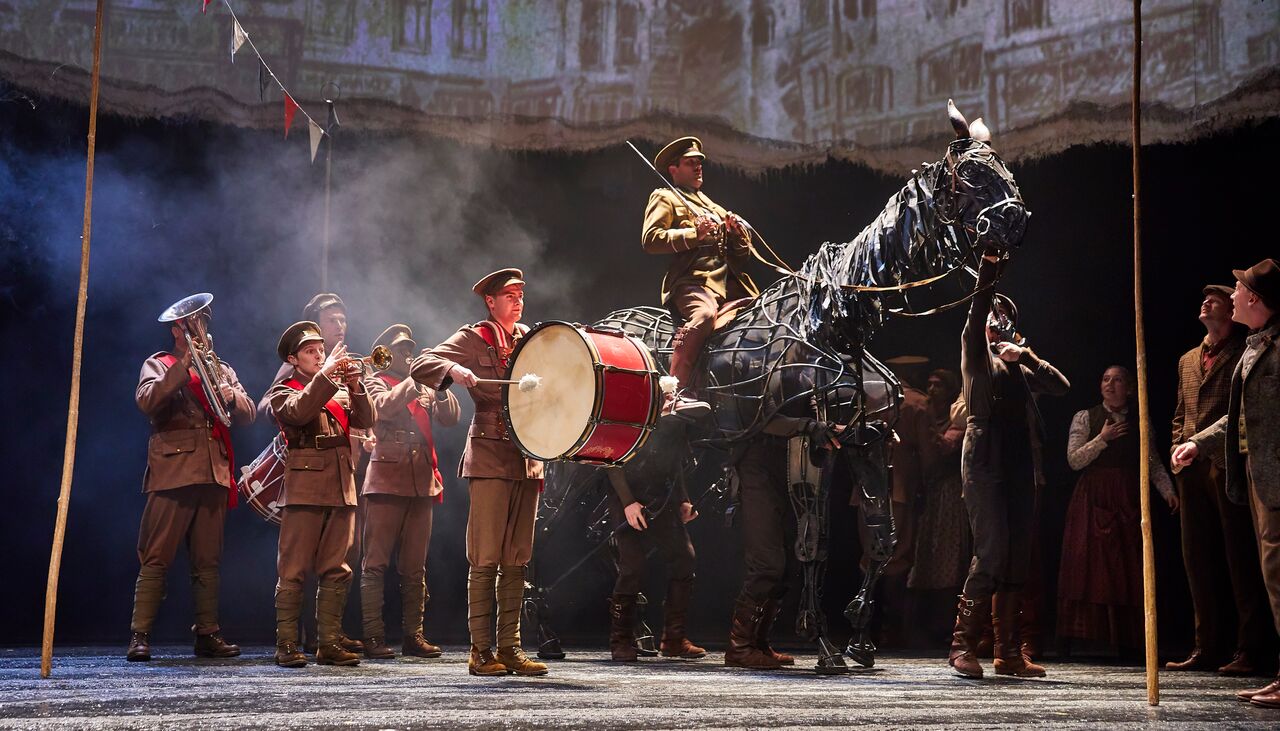 We first meet Joey as a playful foal, purchased by Albert’s reckless father Ted (Gwilym Lloyd) in order to get one up on his brother. His wife Rose (Jo Castleton) is understandably not impressed that he has frittered away the mortgage money. But Albert takes Joey under his wing and helps him grow into a strong and faithful horse.

But then war breaks out and as the army arrive in the Narracott’s rural Devon village looking for recruits, Albert’s father sells Joey to the officers. Naturally Albert is devastated and when Joey doesn’t return home for Christmas as his dad has promised, Albert runs away and joins the army in order to find Joey.

What ensues is a beautiful story of bravery and determination set against the backdrop of the horrors of war, but with the relationship between Albert and Joey at its helm.

Thomas Dennis (pictured below) plays Albert and we see his youthful energy and enthusiasm darkened as fighting for his country takes its toll on him. 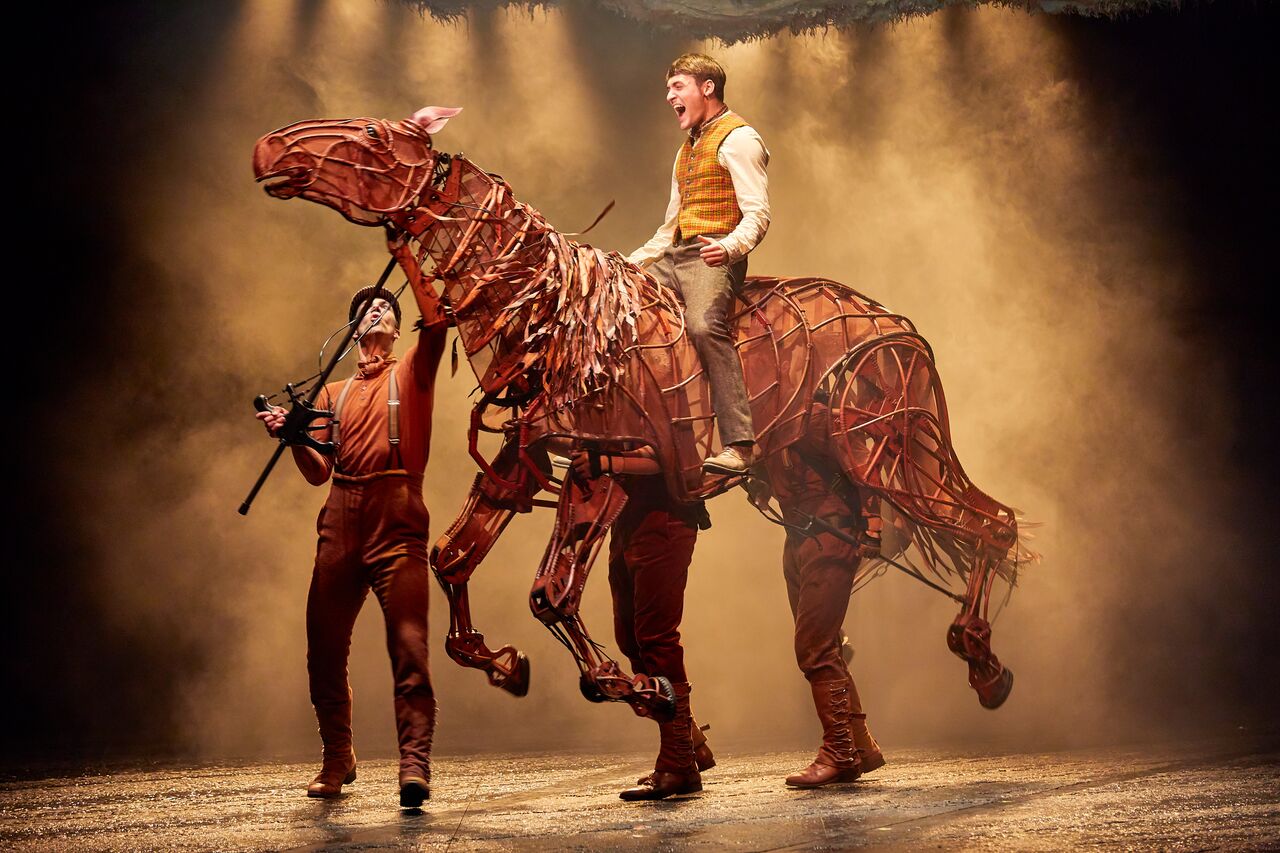 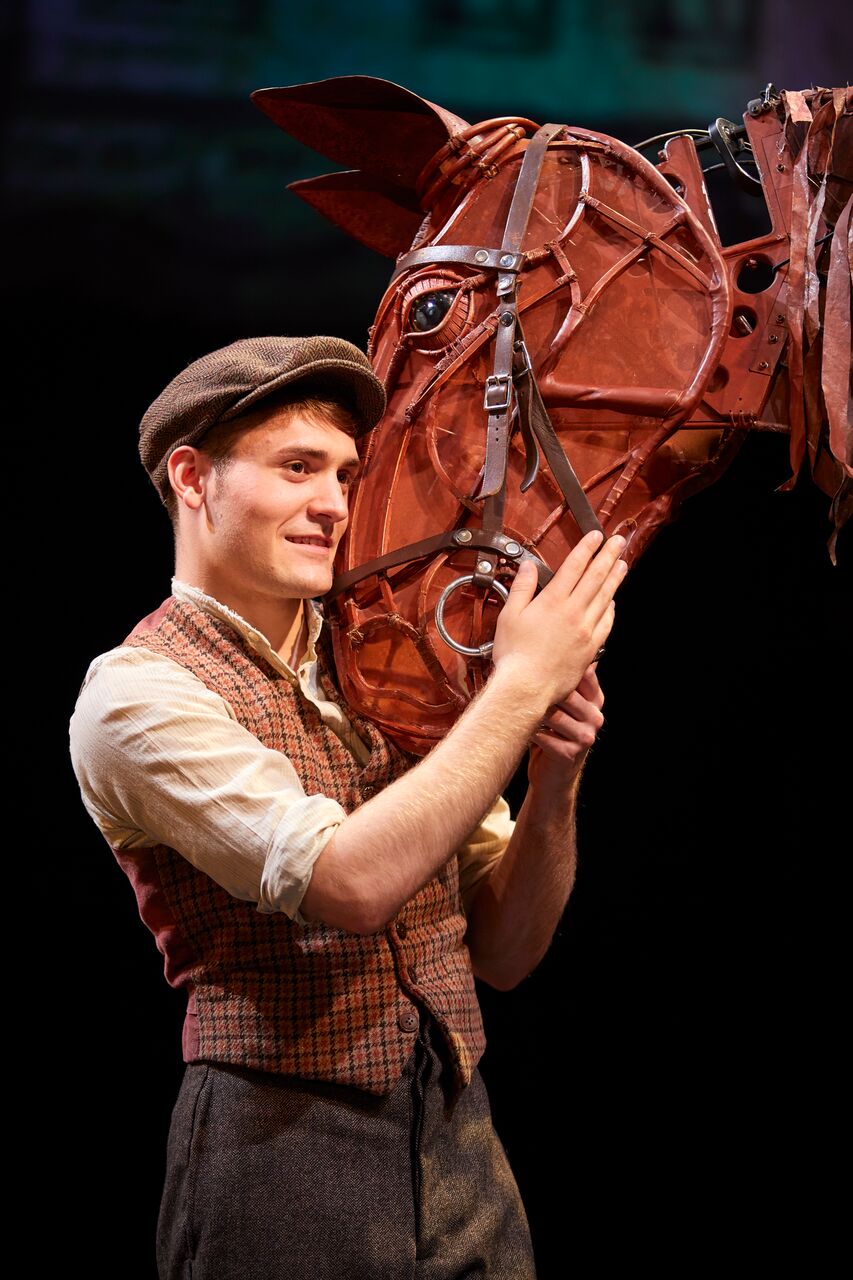 The drama is punctuated with tender folk songs from Bob Fox, giving the audience a chance to reflect on what they have witnessed and for one scene to move into another.

I also really liked the character of German officer Friedrich Muller portrayed sensitively by Peter Becker who is missing his daughter at home and who doesn’t want to carry on fighting.

But of course it is Joey – puppeteered tonight by Lewis Howard as Joey’s heart, Anna Chesser as his head and Nicky Cross as his hind – who is the true star of the show. 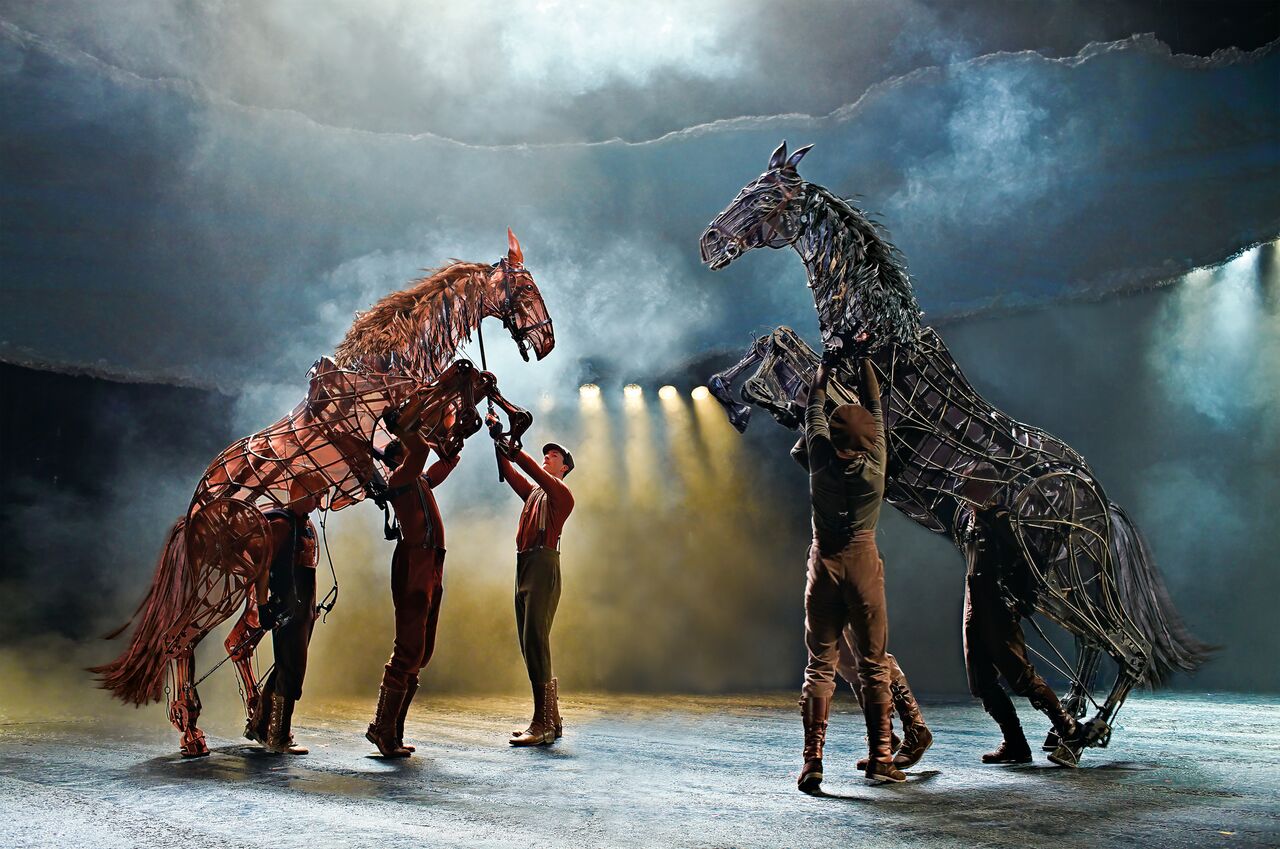 The puppeteering of Joey and the other horses created to much acclaim by Handspring Puppet Company – is so expertly executed. Although the puppeteers are visible on stage, the horses’ movements are so realistic that you almost forget the operators are there. The attention to detail makes the animals so believable, with ears perking up, tails swishing, and incredibly realistic snorting and neighing sounds. You almost forget you are watching a puppet and not a real animal. 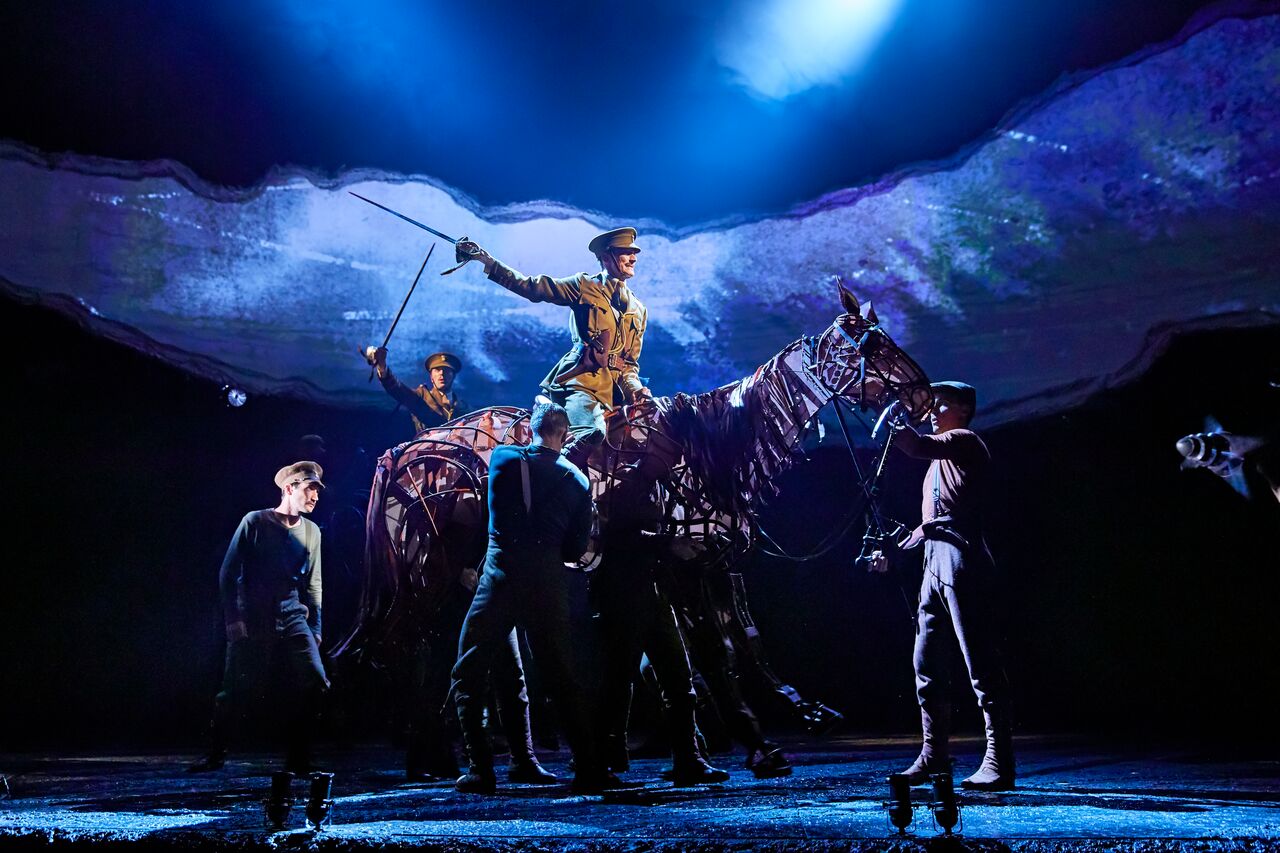 With War Horse, Morpurgo brought to attention the plight of horses during World War The production doesn’t shy away from human lives lost (10 million men died; 800,000 of them British) but it reminds us of the equestrian casualties too. Of a million horses sent to France between 1914 and 1918, only 62,000 returned. We see in War Horse that many of the soldiers realised their mission was futile: what chance did the Calvary stand charging into battle against machine guns, tanks and bombs?

The minimalistic set only enhances the powerful storyline and strong performances. The backdrop and lighting are dark with very few props. Overhead, images are projected onto a torn sheet of paper which we later see ripped from a notebook. Black and white line drawings depict the different scenes where the story is set. 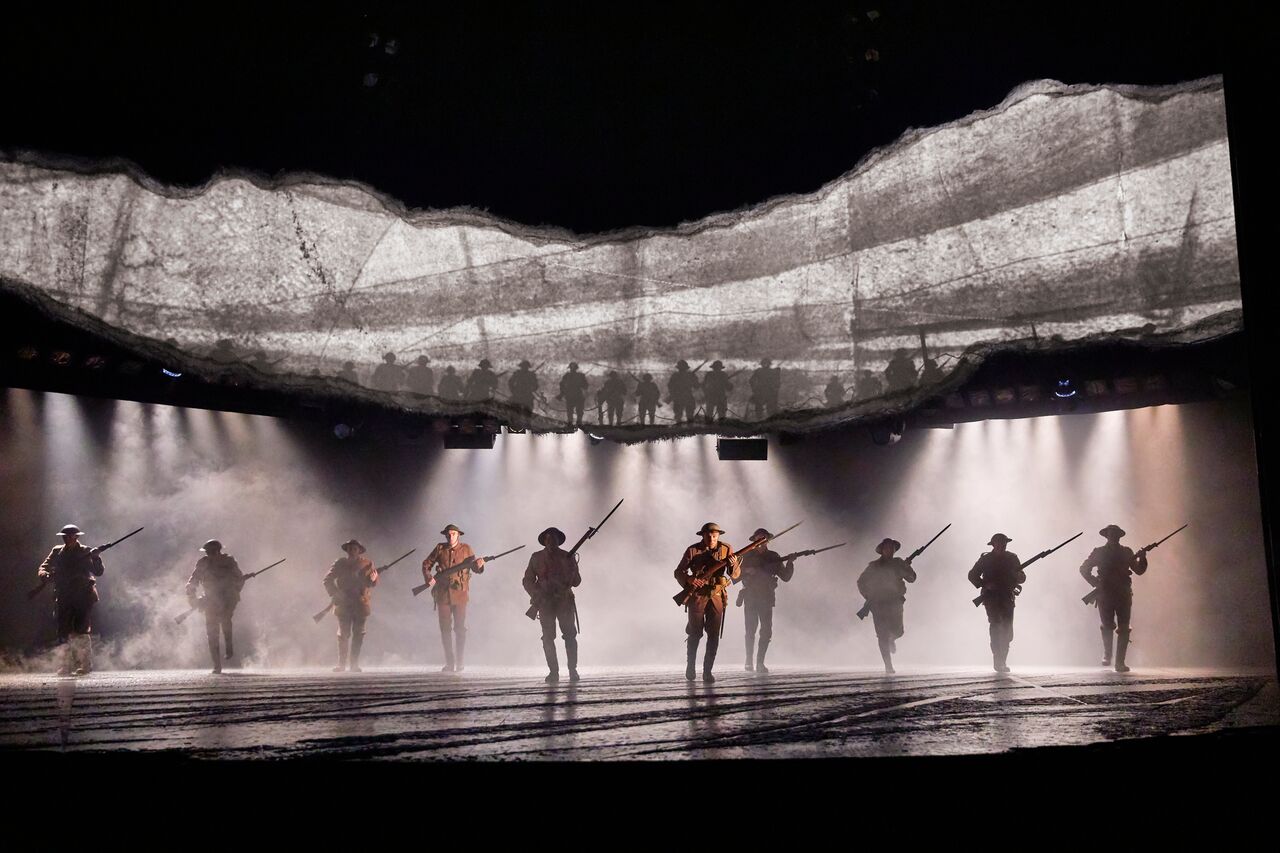 Despite the dark subject matter, there are moments of humour as seen in former Royal Welsh College of Music and Drama student Andrew Hodges’ Sergeant Thunder as he drills his new recruits; as well as in the banter between Albert and his fellow soldier David (played by a charismatic Toyin Omari-Kinch).

But this is definitely a show you’ll need your tissues for, as the realities of war unfold in the trenches of France.

The age guidance is 10+ and I’d say that’s about right. There are vivid depictions of war, fighting and death which even as an adult I found upsetting. Having read previous reviews, not taking my sensitive eight year old along was definitely the right decision for us.

However, in a few years I will definitely be ensuring all three of my children read the book and watch the theatre show. In the centenary anniversary year of the end of World War One, it’s so important that we never forget.

See what Kelly Allen Writer thought of War Horse in her review here.