The last couple of years Cardiff Daddy has undertaken charity mountain climbing challenges with a group of work colleagues. First up was the British three peaks challenge of Ben Nevis, Scaffel Pike and Snowdon in 24 hours and next came the Welsh three peaks of Snowdon, Cadair Idris and Pen y Fan, cycling between the three.

Our children loved receiving photos of their daddy and the team at the tops of the mountains, and hearing about his adventures. They were so inspired and full of questions about the different mountains he had climbed and wanted to climb one too. They said it had to be a little one though because the big mountains would be too tough.

And on Bank Holiday Monday that’s exactly what we did. Except it wasn’t a little mountain; it was a family expedition to Pen y Fan.

Watch a video of our adventure here. 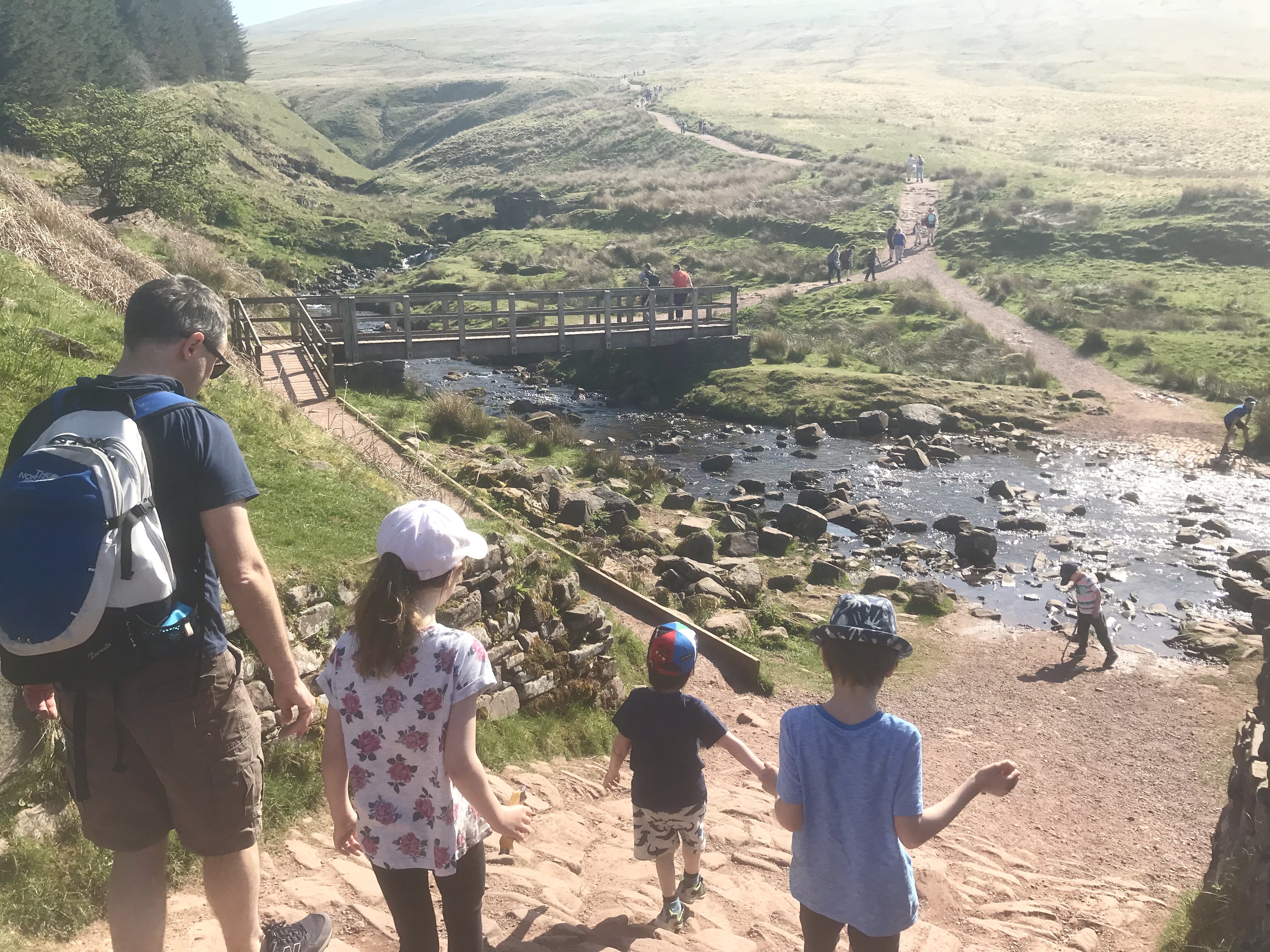 We began at the Pont ar Daf car park on the A470, not far from Storey Arms, the outdoor educational activity centre popular with school, youth and Duke of Edinburgh groups. This is the easiest and shortest route to the top (see some other routes here) and understandably the most popular with visitors. Some 120,000 people a year tread the well-worn paths of what is nicknamed ‘the motorway’. This route gives you the option of also scaling Corn Du (873m) – Pen y Fan’s neighbouring peak. 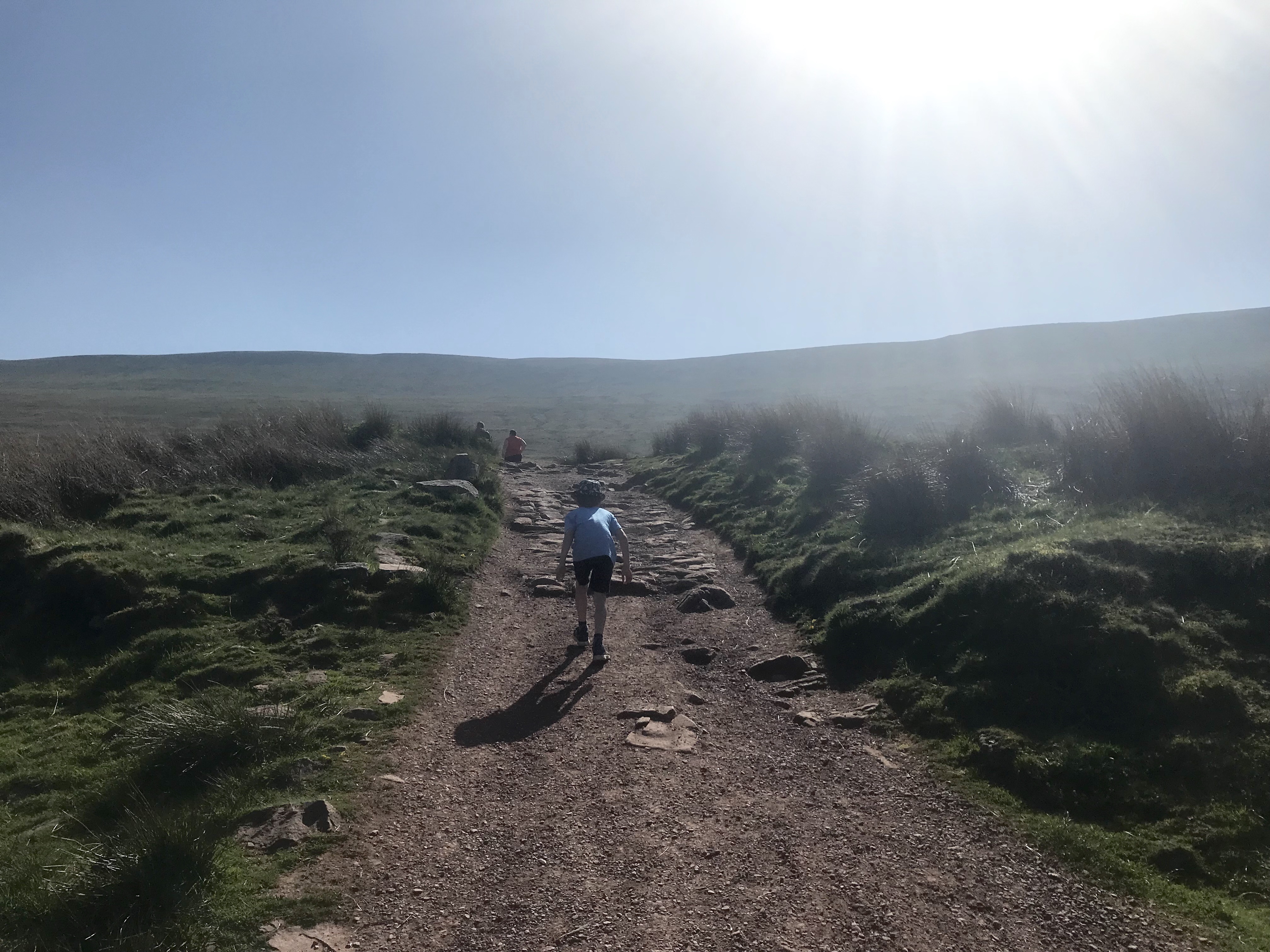 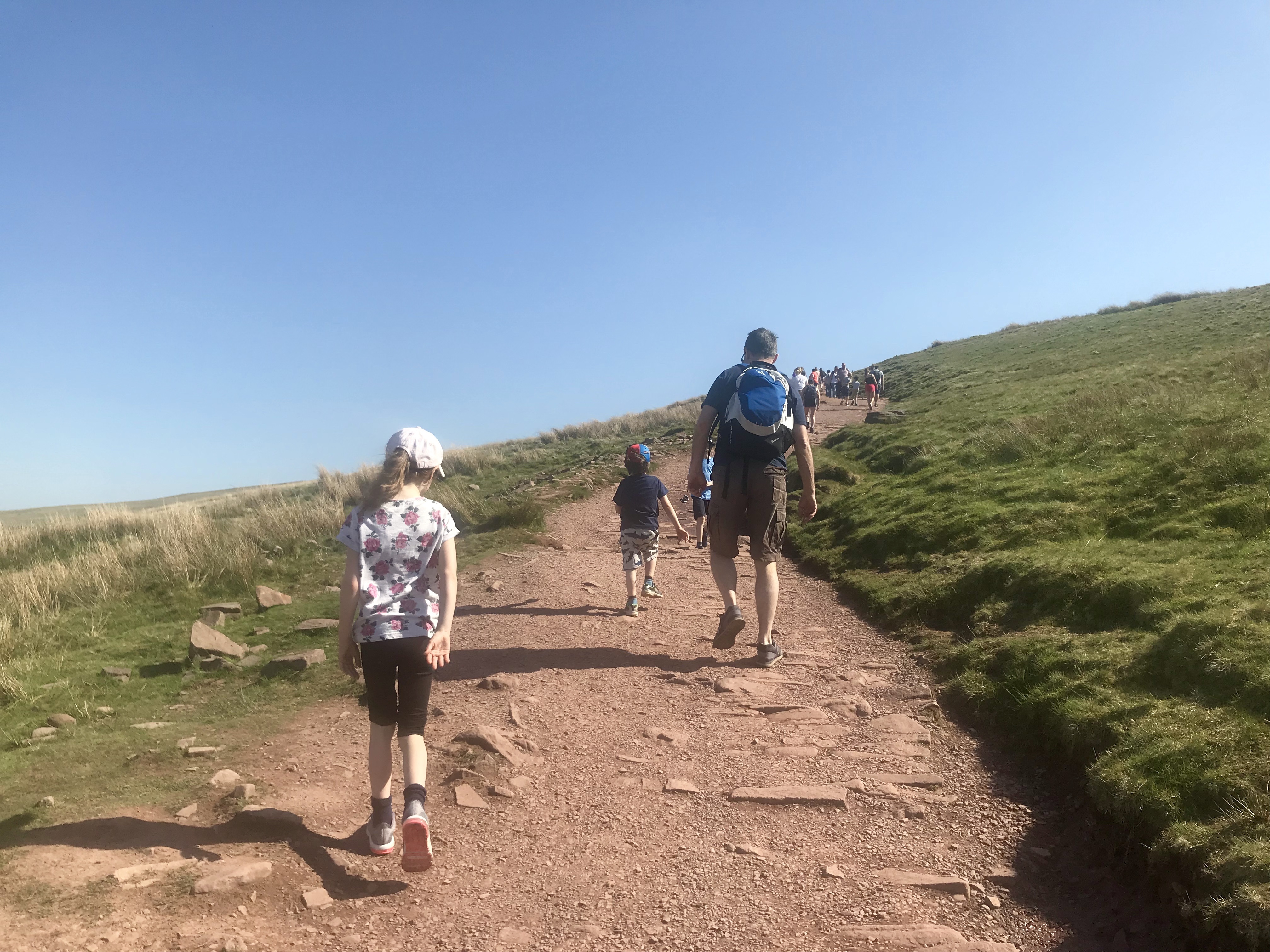 It’s quite an undertaking for children age 8, 6 and 4 and we were fully prepared that things that might not go to plan. We hadn’t told them this is what we had planned for the day until we arrived – and there was a mixture of excitement and trepidation.

However, our children did amazingly. All three of them climbed to the top and back down without being carried or going on Daddy’s shoulders. We had the inevitable ‘are we nearly there yet?’ questions from time to time but there was no moaning at all. They really did us proud. 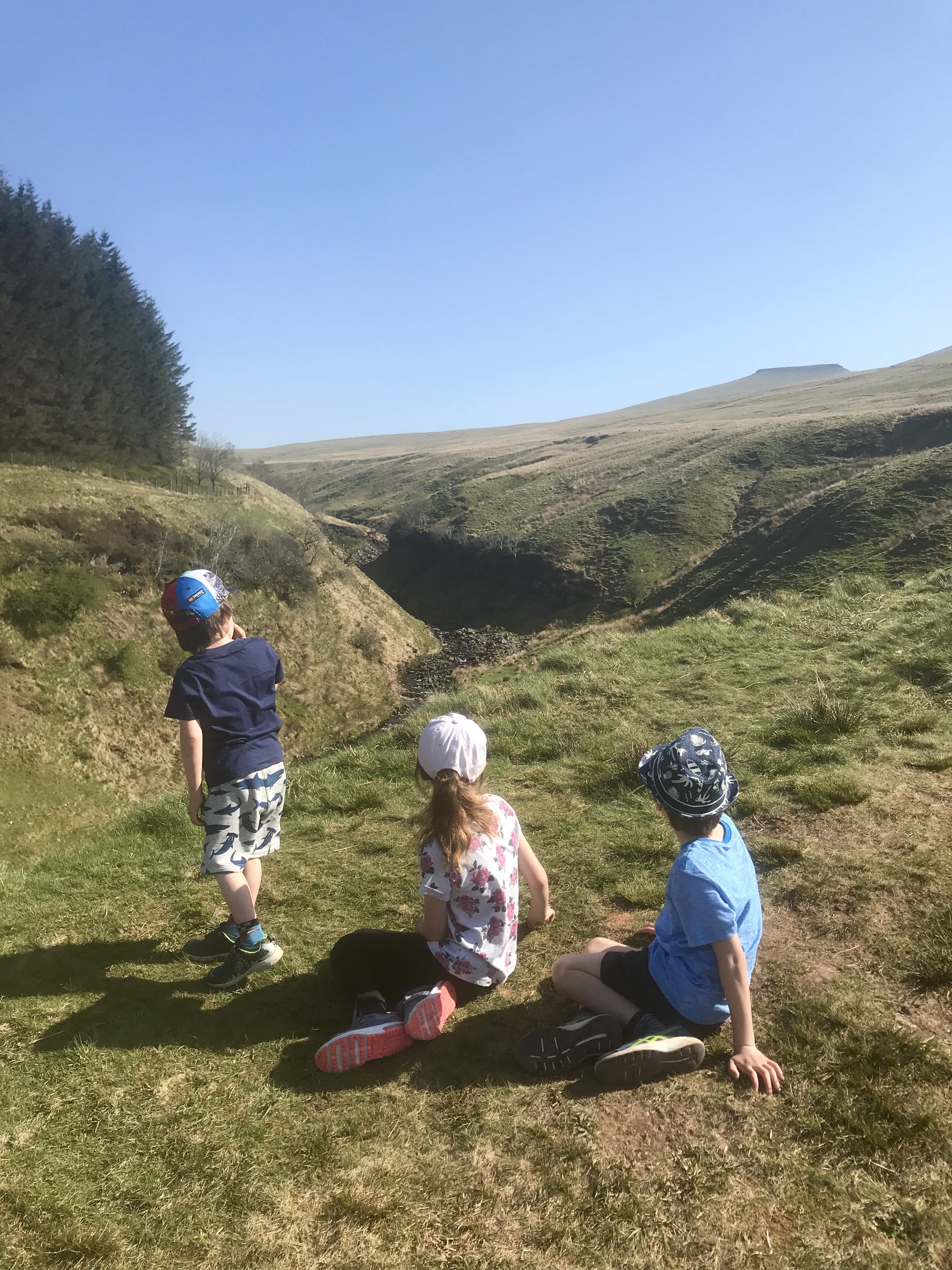 A 40 minute drive from Cardiff, we began our ascent at around 9.45am, managing to park on the A470 road near the mountain’s base (which being in the Brecon Beacons is already at a height of 440m above sea level. There are toilets here although they are rather grim, and a truck selling burgers, fries, hot and cold drinks and ice creams, as well as a National Trust kiosk (they own the site) with information about the mountain and surrounding area.

The sun was shining and so we covered ourselves in factor 50 and, armed with a ruck sack full of water to keep us hydrated, a first aid kit, plenty of snacks for energy and sweets to motivate our little climbers, began our trek. 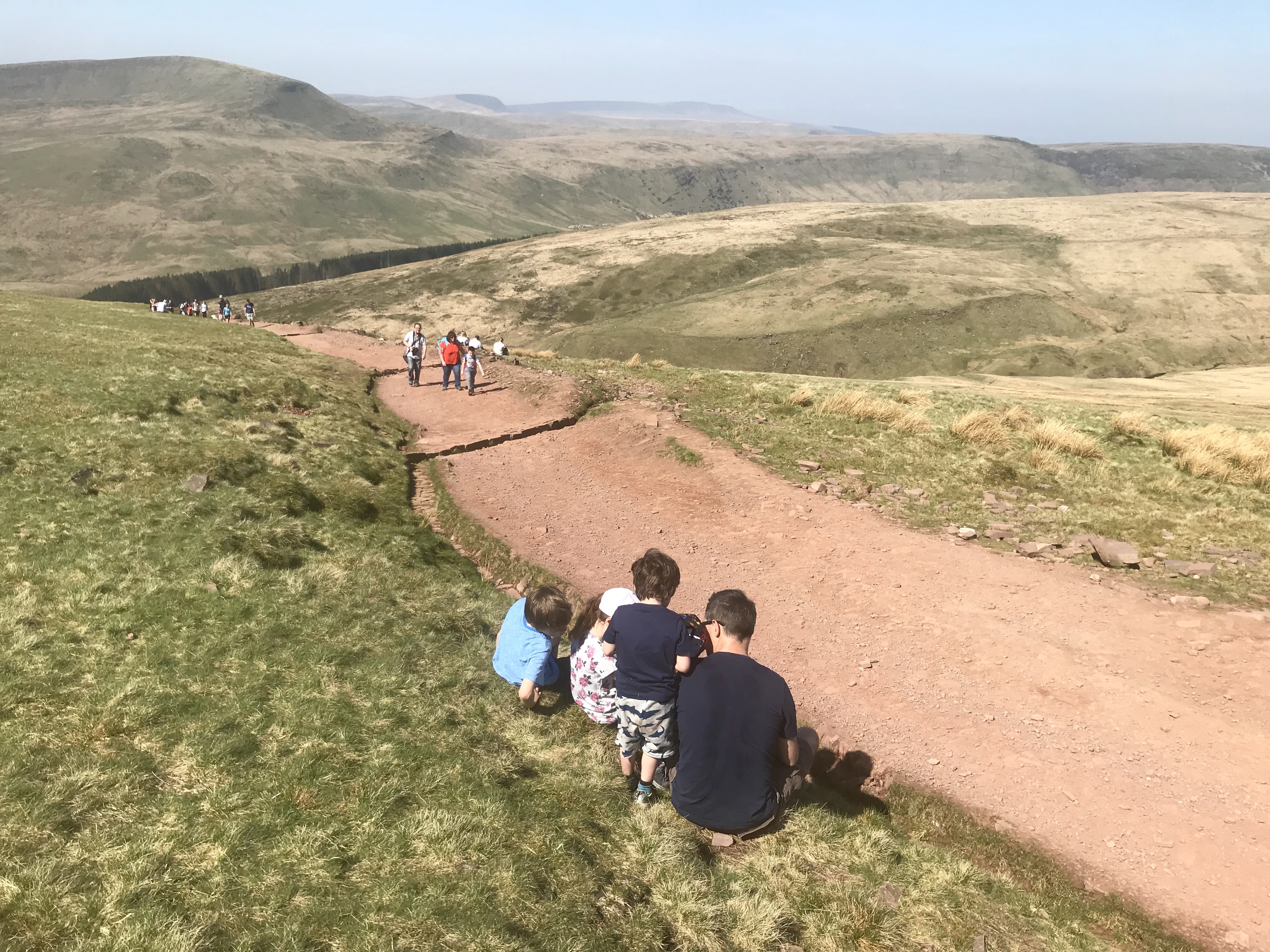 The paths are steep and rocky in parts but it’s a straight forward enough walk to navigate. As it was dry, warm and clear we were happy wearing trainers and leggings/shorts and t-shirts. However if the conditions are at all wet or cold then walking boots, waterproofs, extra layers of clothing and even walking poles and torches would be advisable. It would be dangerous in fog, heavy rain, snow etc so please risk assess appropriately. Conditions can change suddenly and dramatically so it’s worth being prepared.

A stark reminder of how perilous Pen y Fan can be seen with the Tommy Jones memorial. The five year old tragically died on the mountain in 1900 while visiting his grandparents in the area.

The path is dusty and gravelly in parts which made it quite slippery on the way down in particular. That said, with the beautiful weather we saw people dressed in Crocs and sandals, lots of topless men, and women wearing little more than skimpy shorts and bikinis. That’s certainly not what I would wear to climb a mountain! 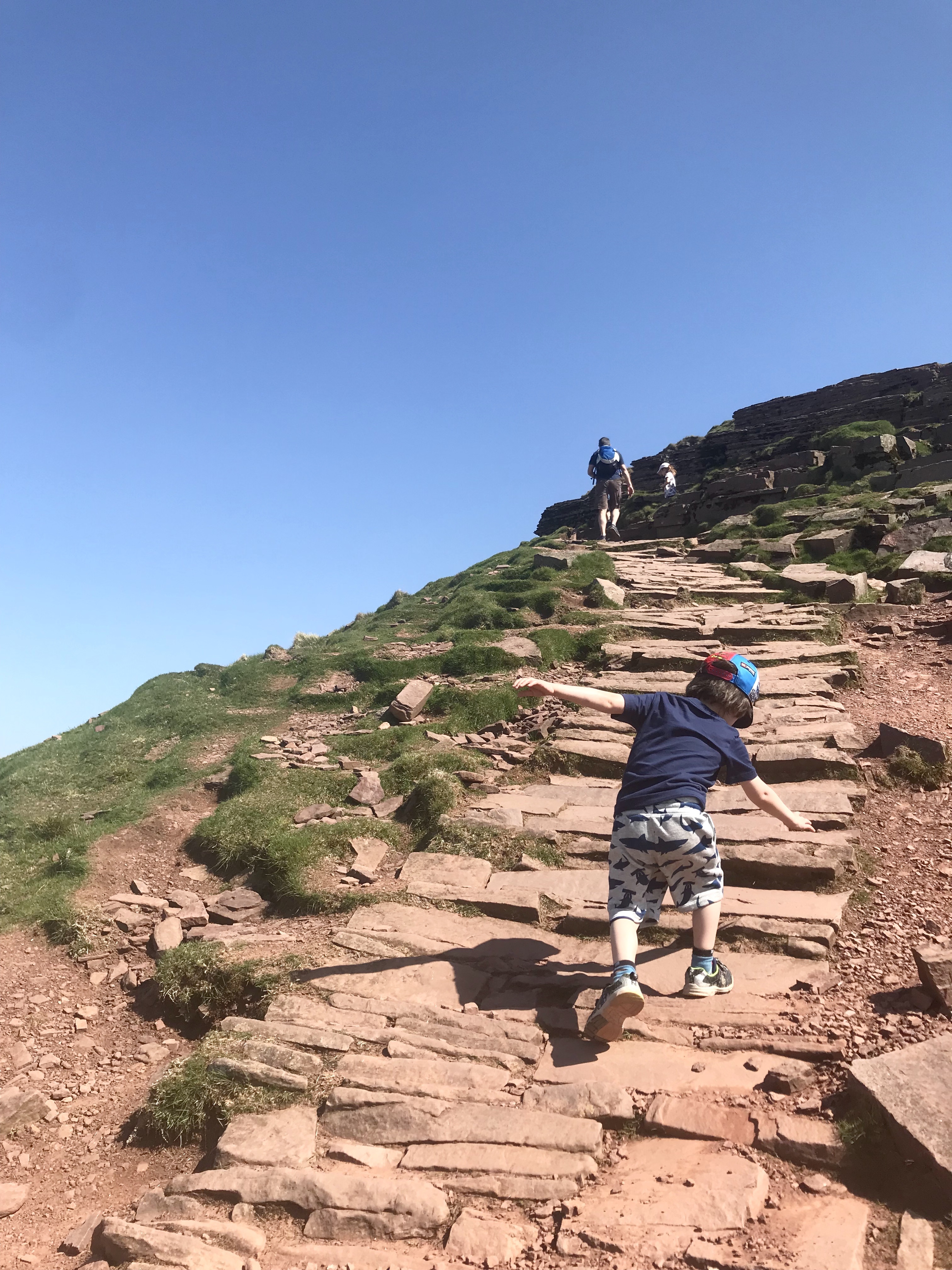 My four year old almost at the summit of Corn Du

It took us around an hour and a half from base to summit with regular stops along the way every 20 minutes or so. We had around half an hour at the top and then it took us around an hour to descend. The paths were busy but not so much that it spoiled our expedition. In fact I think it motivated my children seeing so many others walking up the mountain, including other children. 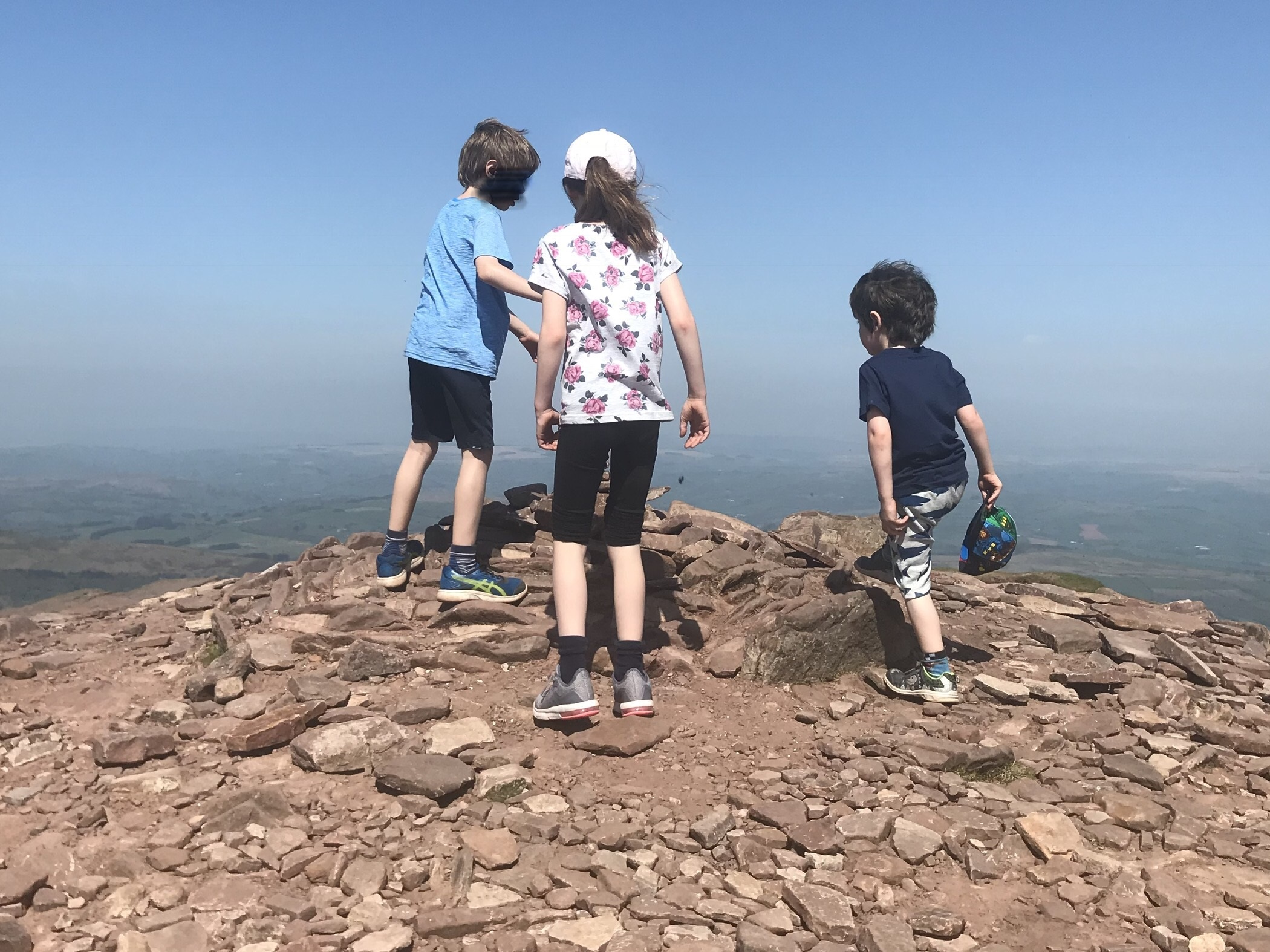 At the summit of Corn Du

The views are incredible from start to finish. There’s a picture-perfect rocky stream at the base of the mountain; the green and rugged terrain of the Brecon Beacons as far as the eye can see; a nearby reservoir glistening in the sun. On a clear day you can even see as far as the Bristol Channel, Carmarthen Bay, Swansea Bay, the Gower Peninsula, the Black Mountains, the Cambrian Mountains and Exmoor.

The entire experience is utterly beautiful and a reminder of just what a wonderful country we live in. 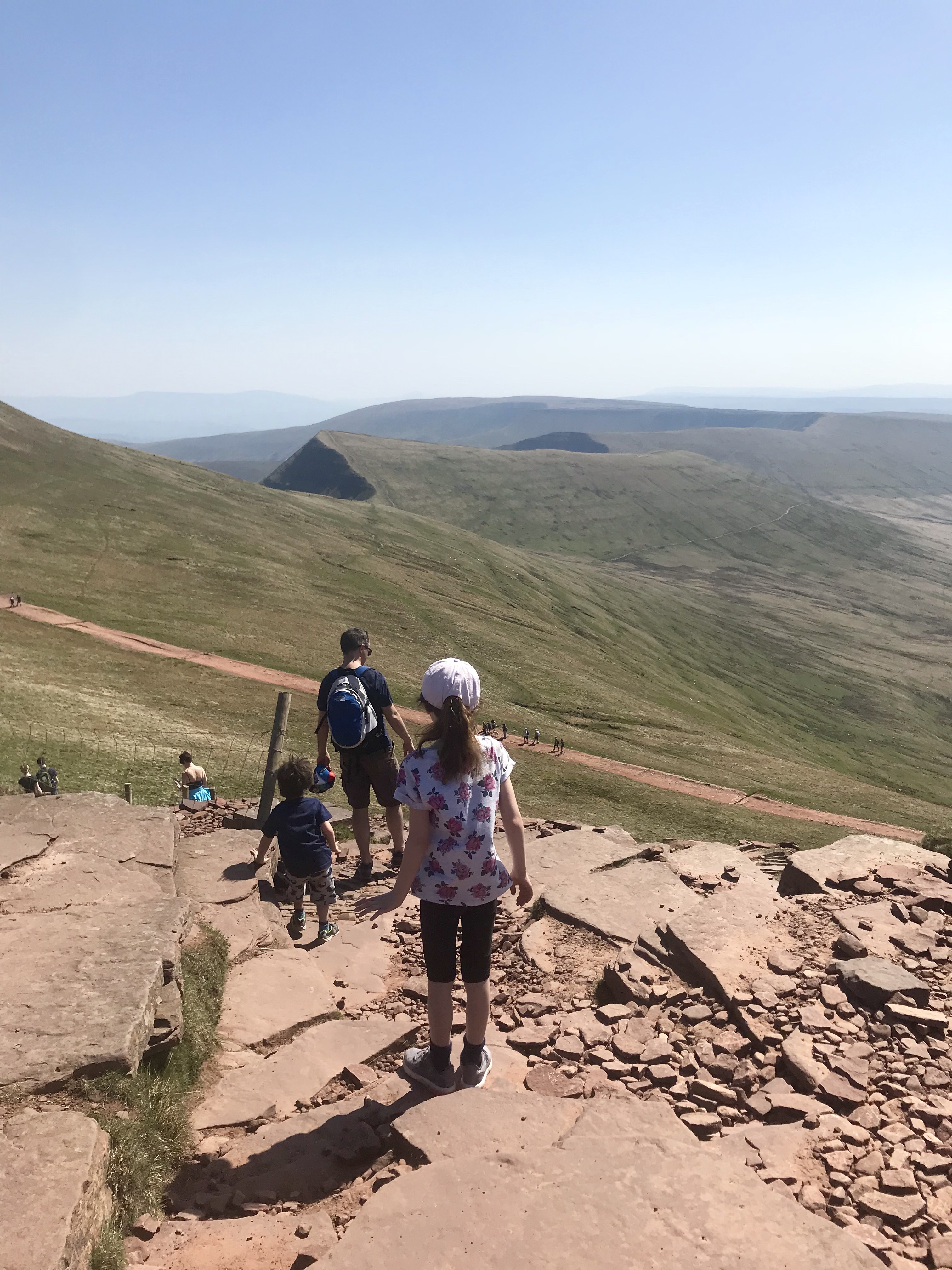 Heading down from Corn Du to Pen y Fan

The first peak you come to, and the one visible from the base, isn’t actually Pen y Fan. It’s the aforementioned Corn Du. You can either climb the rocky tip of Corn Du and then back down to tackle Pen y Fan or by-pass it and take the path directly to Pen y Fan. We did the former, reasoning that if you’re going to do it then you might as well do it properly.

Both mountains were ancient Bronze Age burial sites and at the summits you can see ancient cairns which are around 5,000 years old. The two were formerly known as Cadair Arthur or Arthur’s Seat. 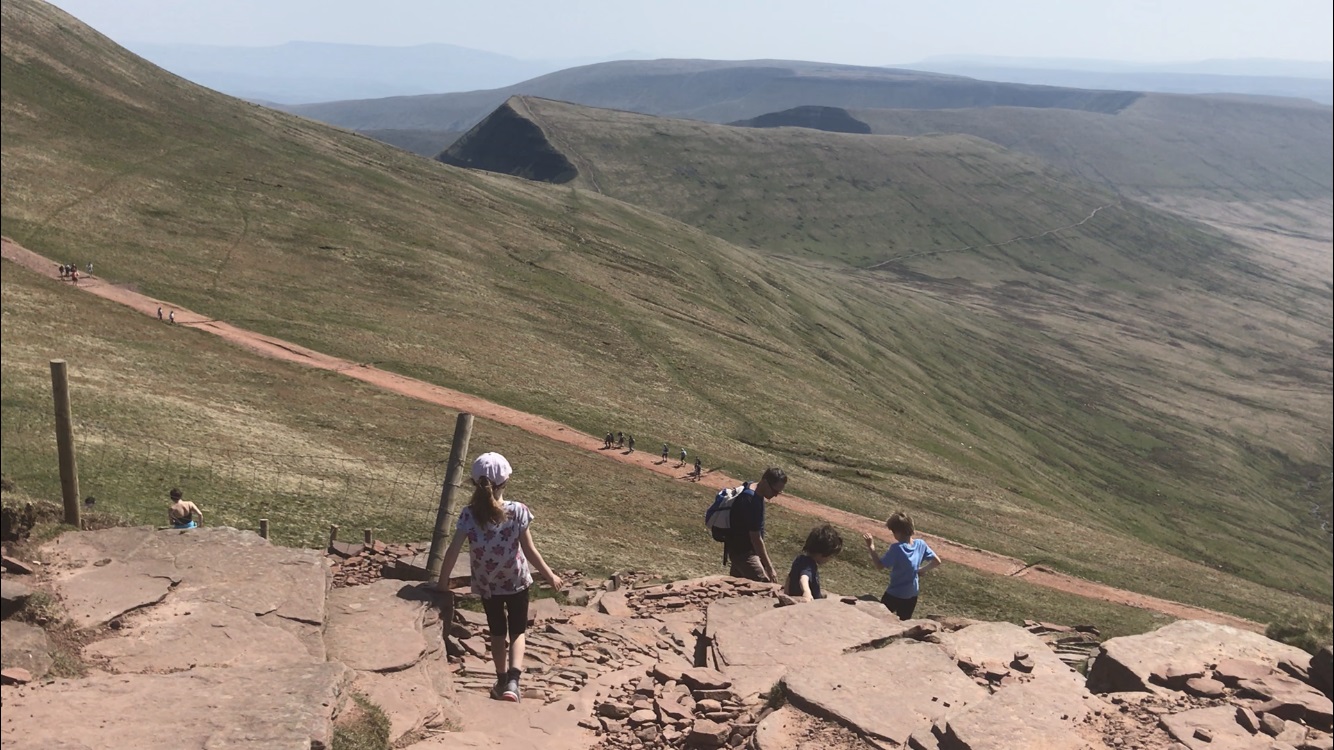 On such a clear day, the views from the summit of Pen y Fan were breath taking. I’m not sure my video and photos could ever do the experience justice because it’s not just about what you see but what you can feel as well with the pure air the sense of history from one of South Wales’s most famous landmarks not to mention the sense of achievement from having reached the top.

Once you get to the top you need to take a photo with the famous stone with the name of the mountain and the height. There was a queue but everyone was very patient at offering to take group photos and letting each group get a photo on their own. 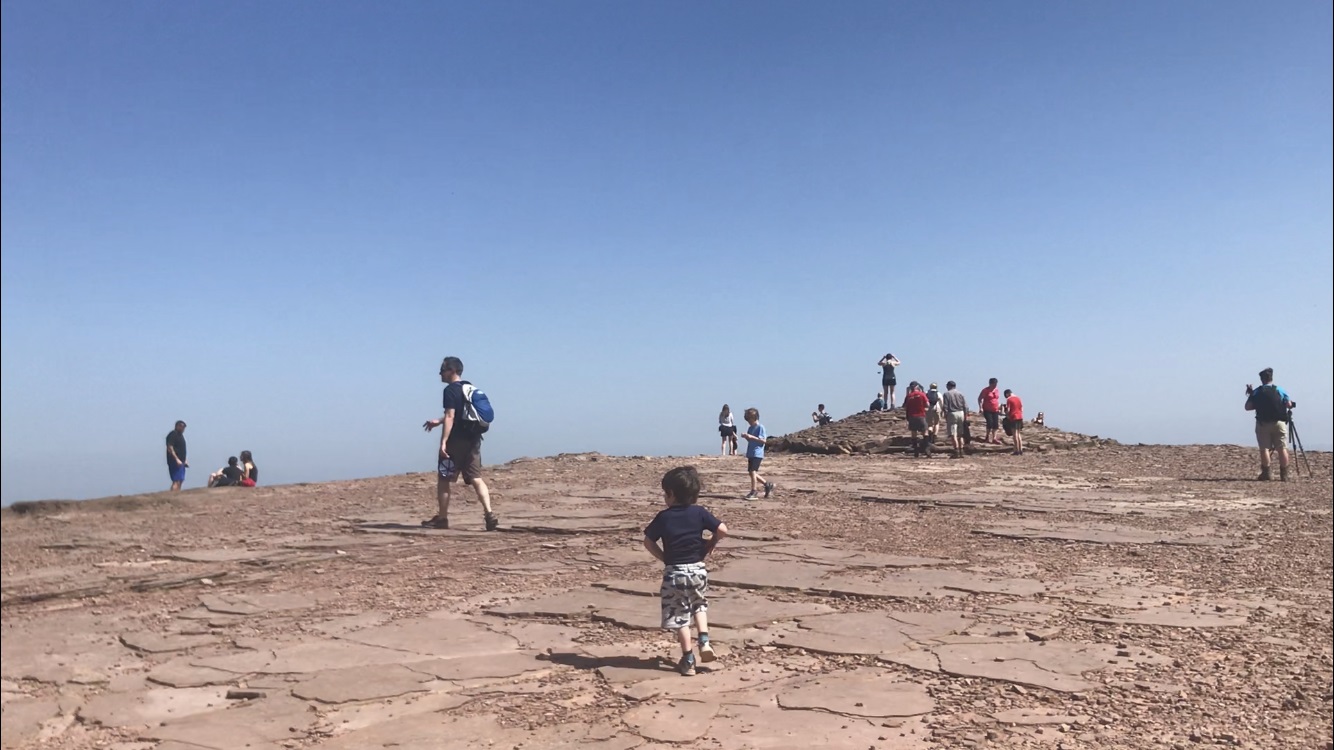 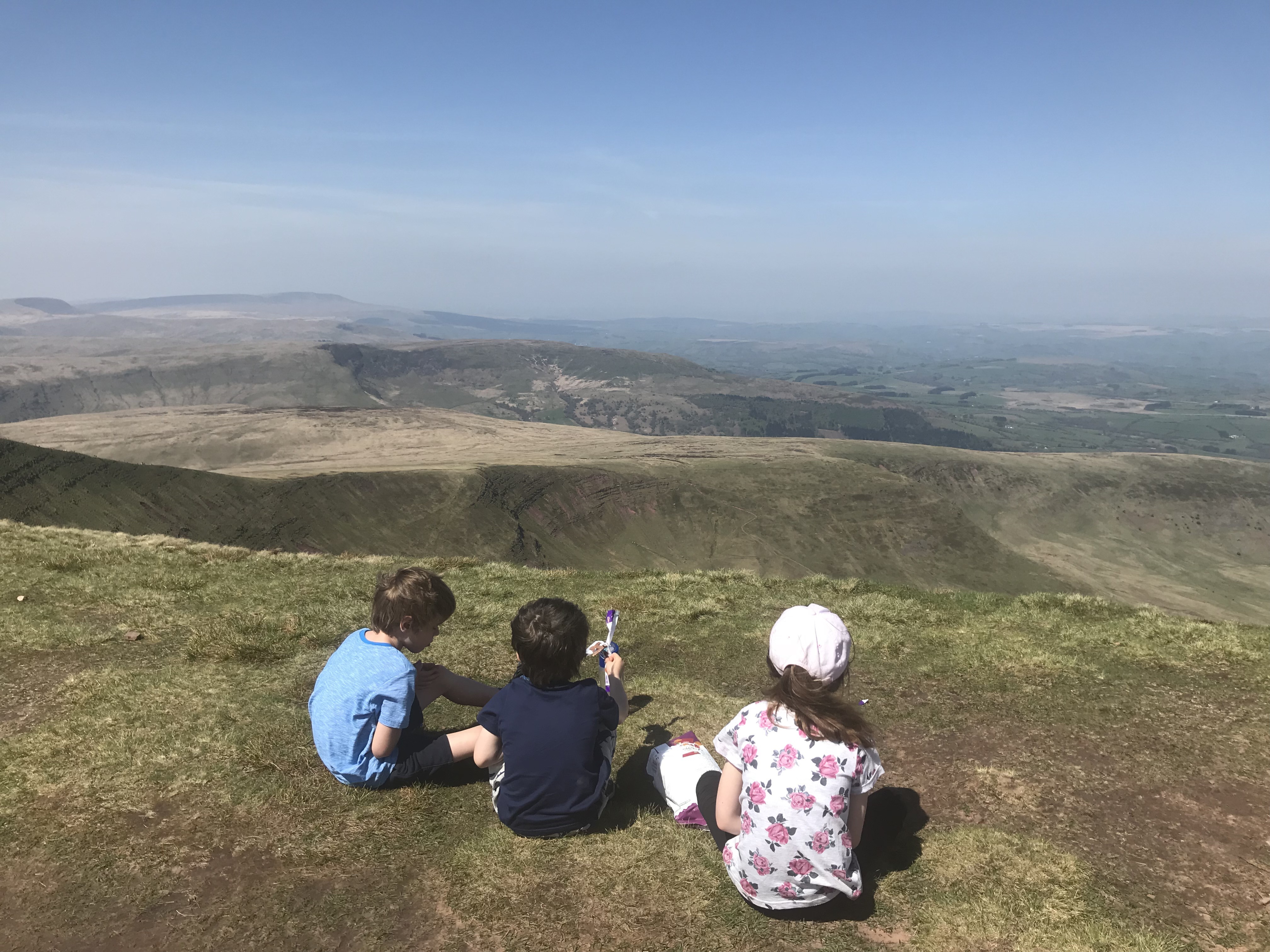 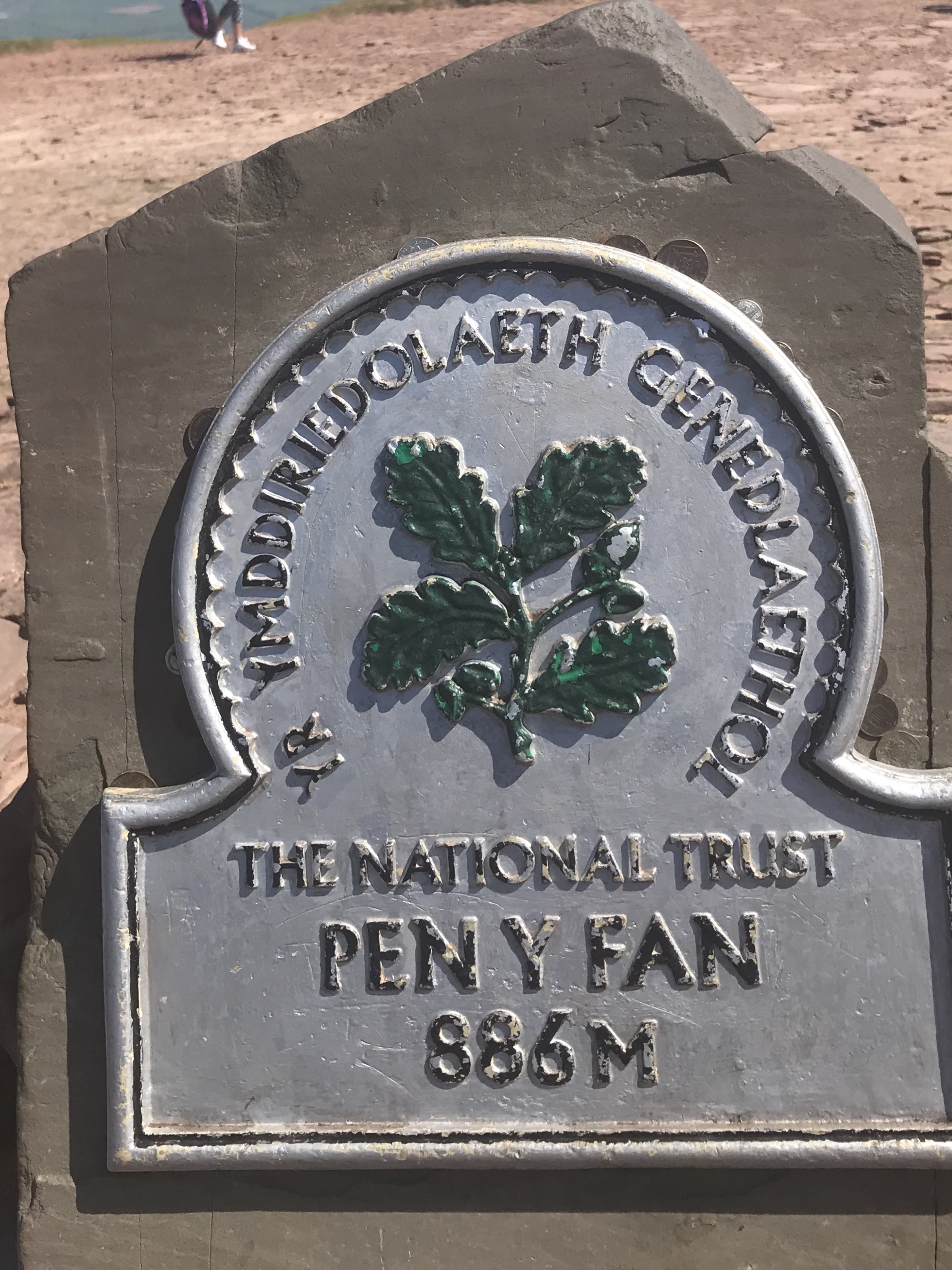 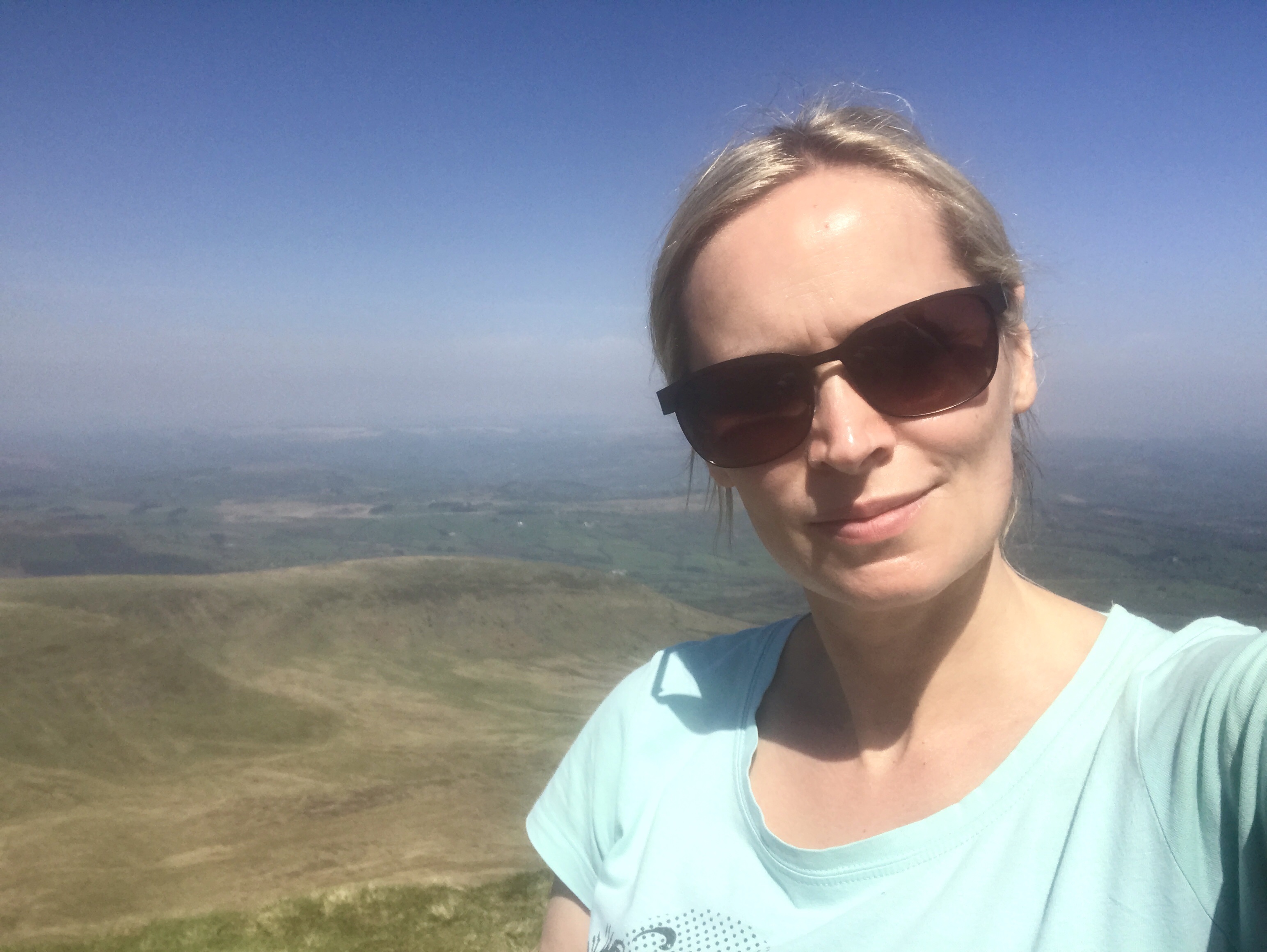 The descent back down was a lot easier and took us less than an hour. We took the flat path instead of traversing Corn Du again and didn’t need to stop as often. 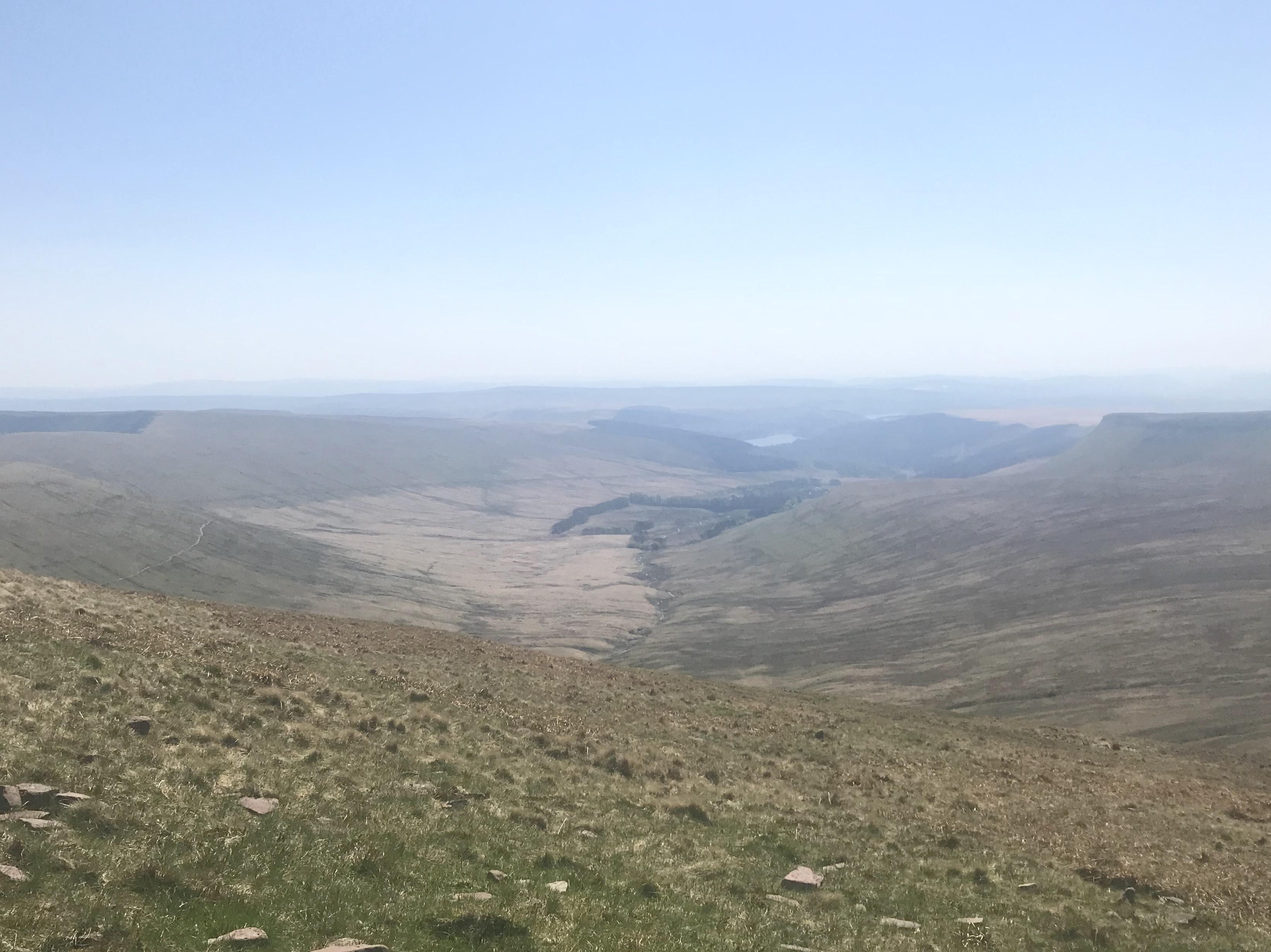 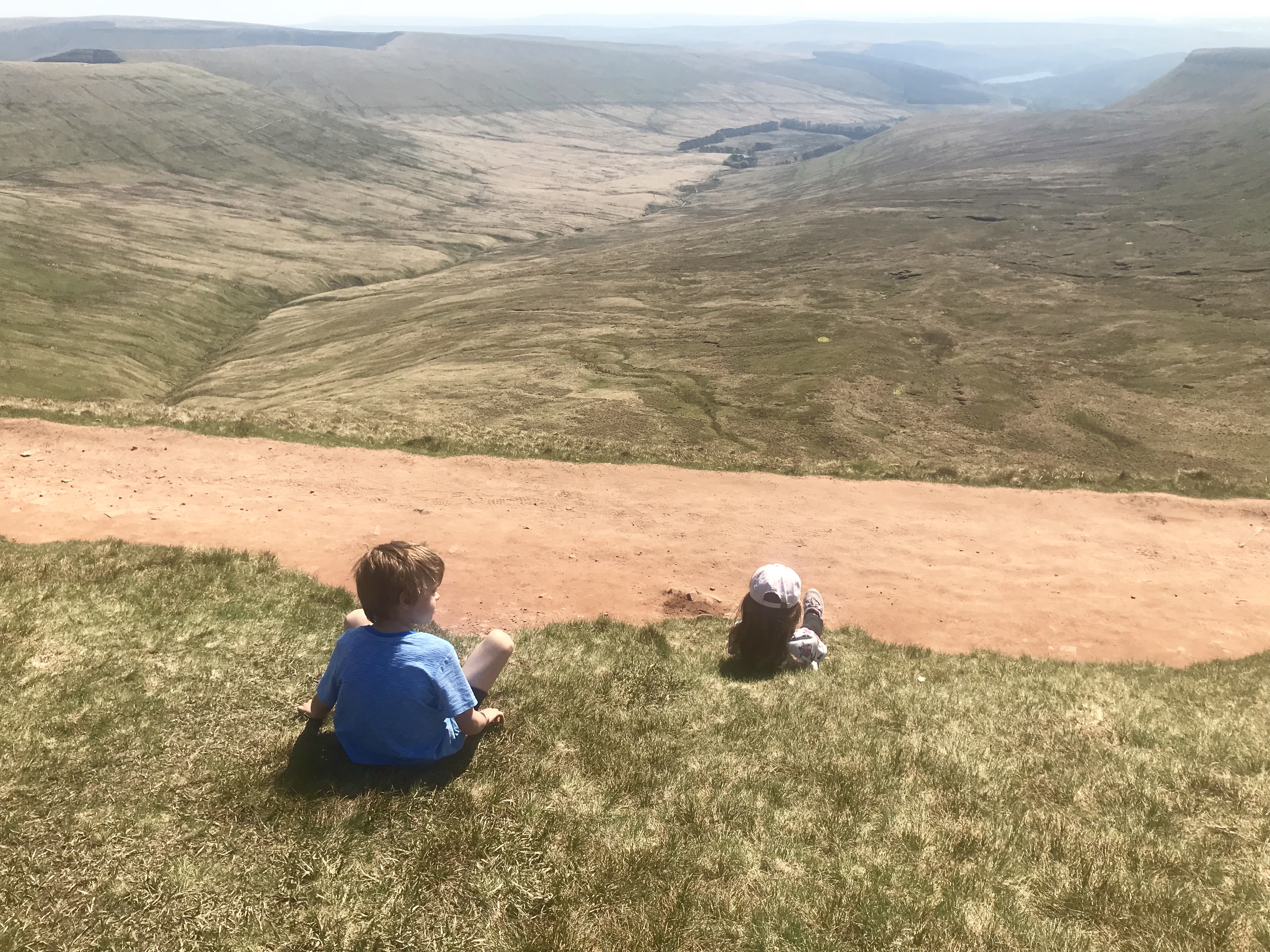 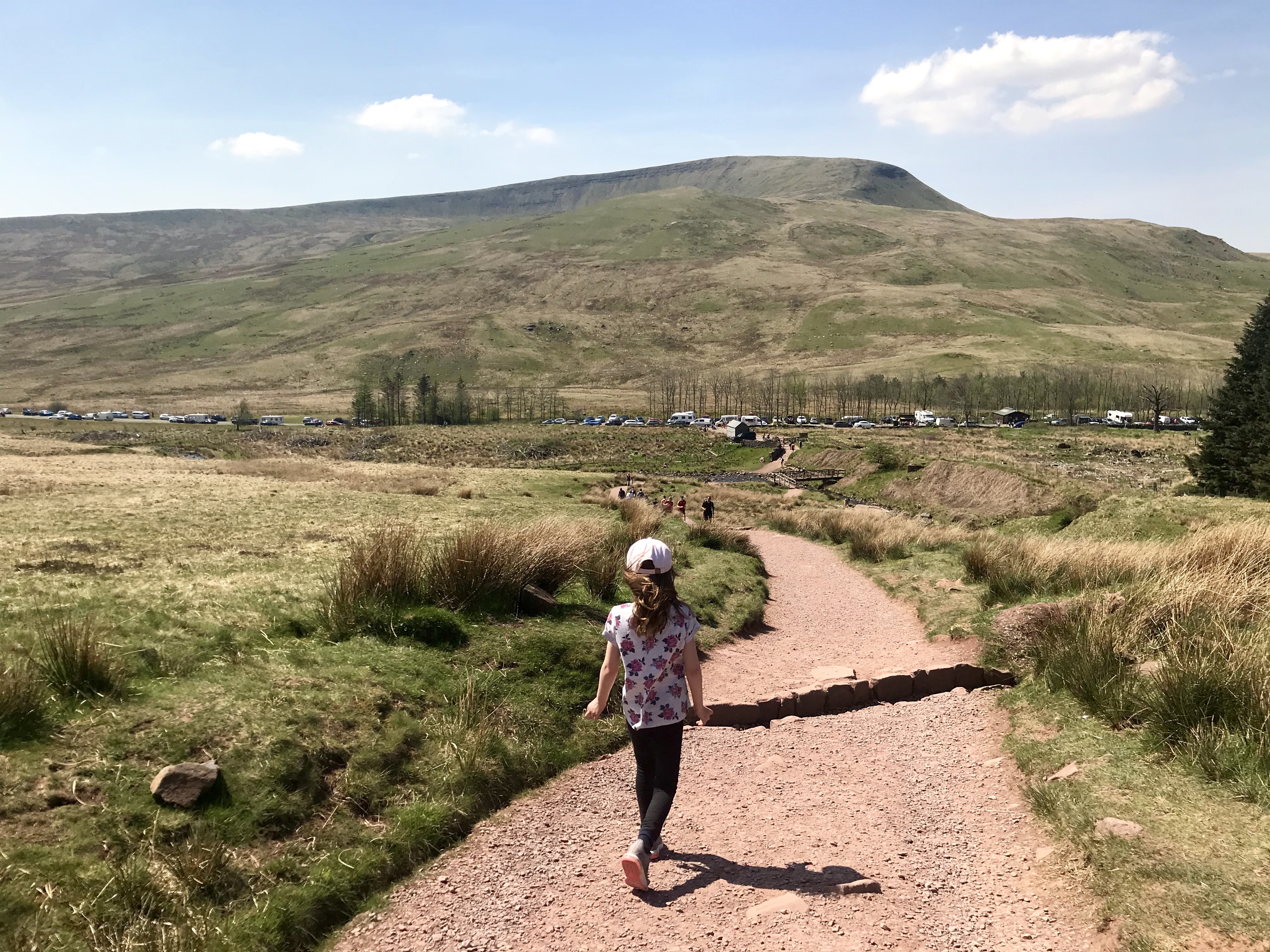 We were hot when we got to the base… and my children wasted no time at all in walking straight into the rocky stream at the bottom to cool off. There were wet trainers and clothes all round but who could blame them after accomplishing such a feat? 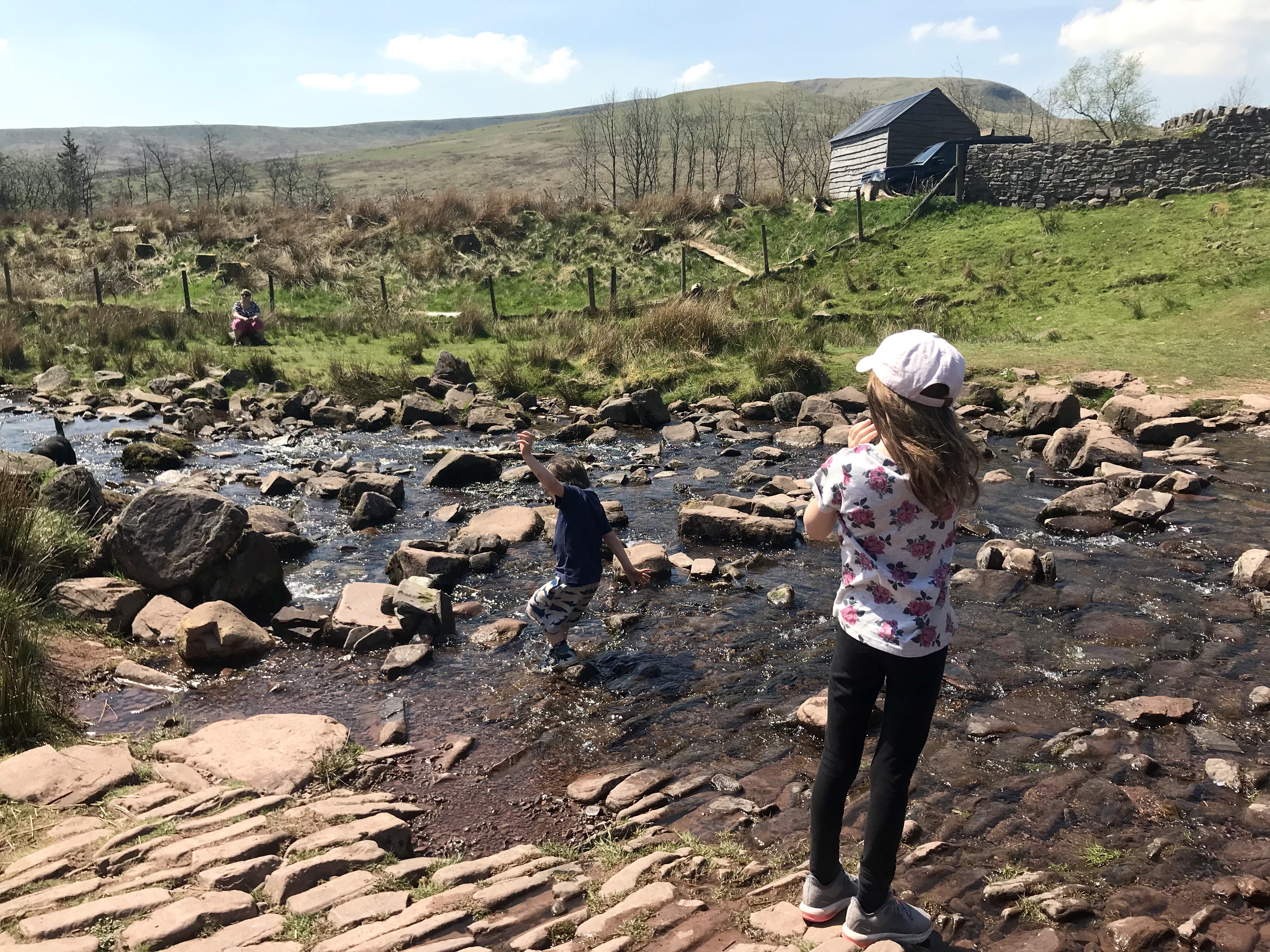 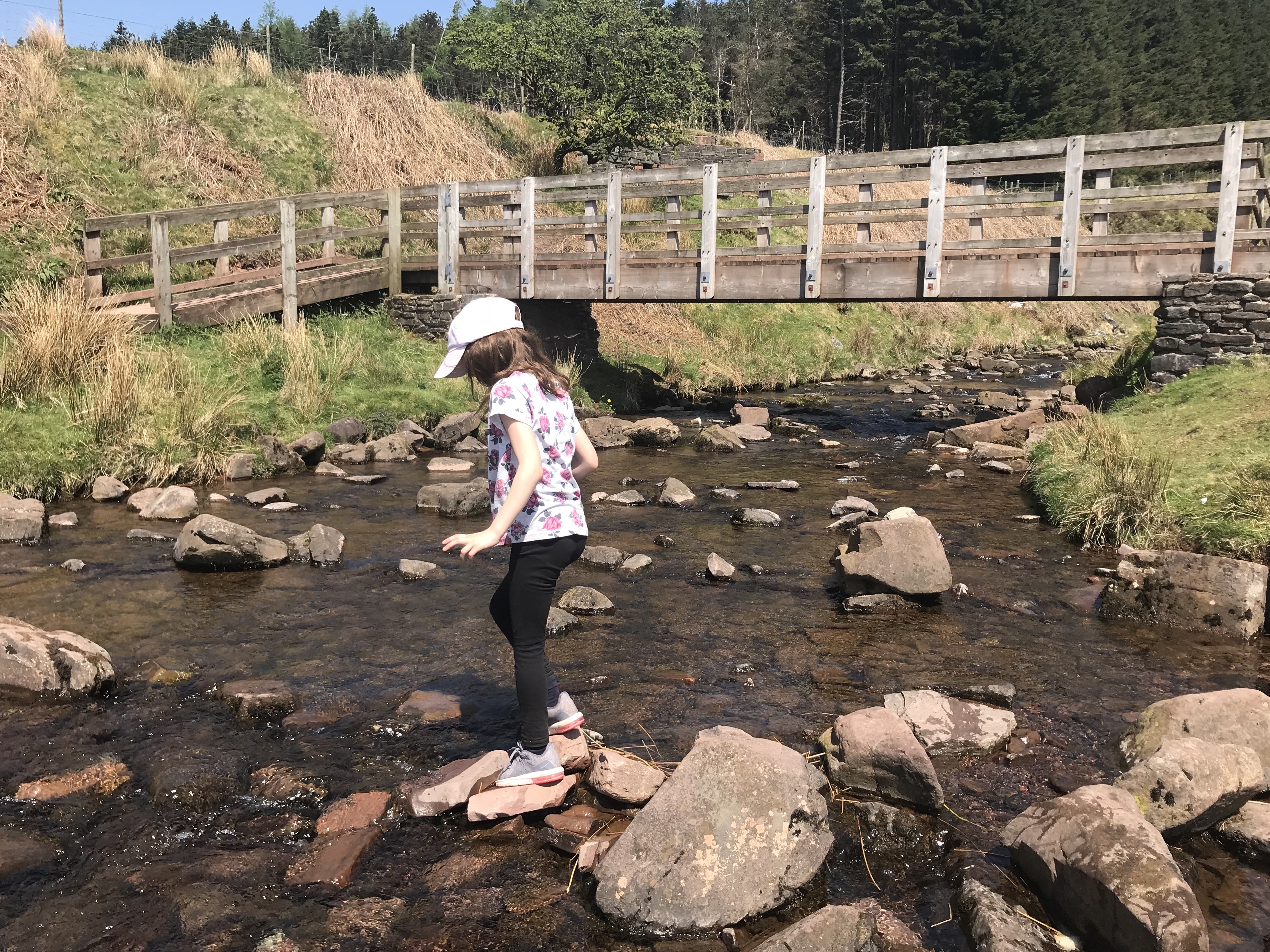 Our last stop of the day was for ice lollies at the ice cream van handily waiting for us at layby. A much deserved reward for our first family mountain climb.

Have you climbed Pen y Fan with your children? Do let me know in the comments below, on the Cardiff Mummy Says Facebook page, or by tweeting me on @cardiffmummy

See more photos from our adventures on the Cardiff Mummy Says Instagram feed. 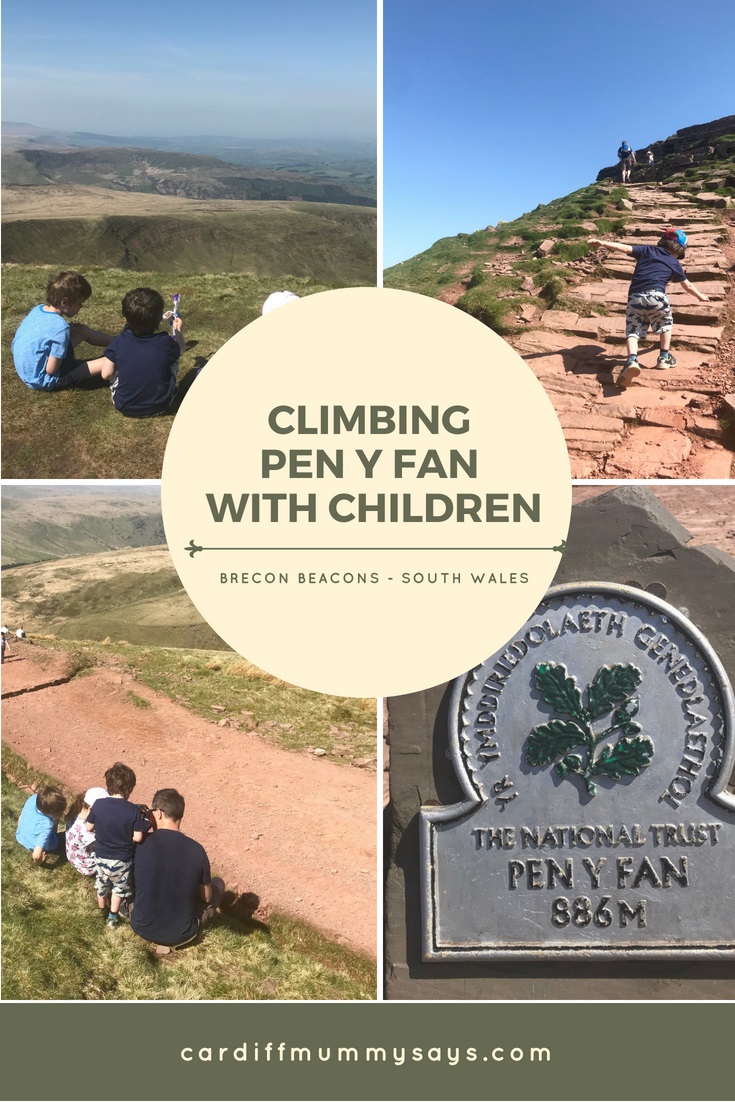