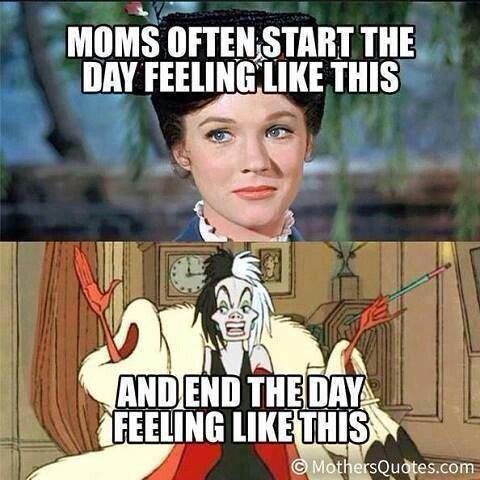 That’s exactly how I’ve been feeling of late. I wake up with the best intentions of being a calm, serene and fun mum doing wholesome activities with my perfectly-behaved children.

It usually lasts for about five minutes after the morning alarm goes off. All three kids jump into bed with us and soon enough two of them are fighting over who gets to go next to Mummy. There will be an elbow in my face or someone will stand on my hair. “He hit me!” someone will cry.

“Don’t shout, Mummy. Don’t shout.” I remind myself as I inhale deeply and try to diffuse the situation by telling them a funny anecdote or asking them to tell Daddy about that exciting thing they did in school.

While they’re distracted I jump straight out of bed and into the shower, giving them instructions to get dressed. I close the door behind me but they’re all in and out of the bathroom continuously; using the loo; looking for a hair brush; playing tag. I close my eyes and mentally curse Cardiff Daddy for leaving the house so early for work.

I’ve learned not to always step in when they’re bickering. They usually sort things out between themselves pretty quickly and will go from worst of enemies to best of friends in an instant. It’s good for them to learn compromise and tolerance and negotiation. Soon enough things are fine and my heart melts as I see them playing some random imaginative game.

Until I realise that we need to leave the house in three minutes and no one has their shoes or coats on and we have a missing homework book to find.

Five minutes later and only one of them is wearing shoes. The homework book still can’t be found. And Littlest is insisting on carrying 8 cars with him wherever he goes meaning getting his coat on becomes something of a mission. He doesn’t want to put them in a bag. He’s three; of course he doesn’t.

It’s a drive-to-school day today because Littlest and I are heading straight from drop off to the supermarket and then pre-school class. Good job really because if we were to walk the mile-long route we should have left 10 minutes ago. The traffic is crazy. Ah, crap. There’s nowhere to park. Even more ah, crap. Don’t shout Mummy. Don’t shout. Shouting won’t change a thing. “WHY CAN’T EVERYONE JUST GET READY WHEN I ASK THEM?! WE ARE GOING TO BE LATE.” And there it is. Shouty Mummy has been unleashed. I hate Shouty Mummy. Deep breath. Think fresh and bright like Mary Poppins. 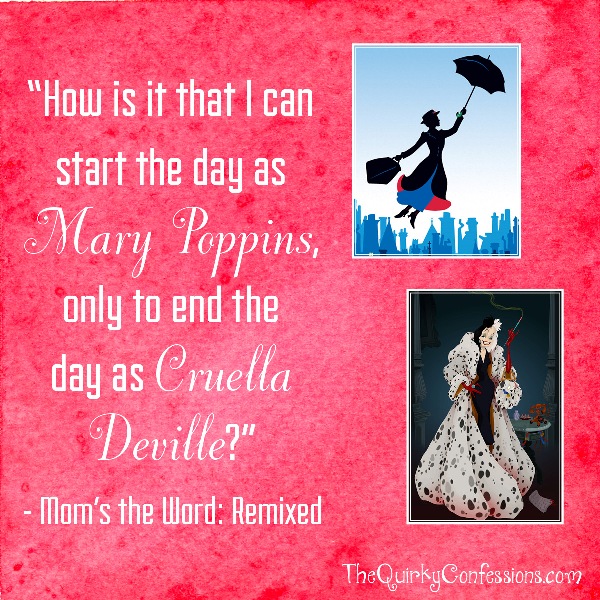 We run up the street arms laden with book bags/PE kits/lunch boxes/musical instruments. Littlest stops to jump in a puddle. Soggy feet. Great. School runs were soooo much easier when he was in a buggy and I only had the two to contend with and somewhere to hang all the bags.

The gate is still open! By some miracle we don’t have to do the walk of shame through the late door. Hurrah!

Pre-school class passes by uneventfully. I feel totally Poppins-like as we sing and play games and he eats his healthy packed lunch.

Until… it’s time to put his school uniform on for afternoon pre-school. (That’s what happens here in Cardiff; 2.5 hours a day of nursery education in a school setting.) He doesn’t want to wear it. I put his school jumper on. He takes it off. Repeat. Repeat. I try to make a fun peek-a-boo game out of it.

Eventually we are in the car and on our way.

And he’s fallen asleep. A quick apology to the teacher about dropping off a grumpy three-year-old who has just woken up.

I get home. I put away the shopping; unload the washing from the tumble dryer; sort out the pants and socks and put them away. I put on a new load of washing; unload the dishwasher from last night; refill with all the breakfast stuff; reply to various work emails; rebook rugby classes; pay online for ballet; RSVP to two children’s birthday parties. I realise I need to leave for school pick up in five minutes and I haven’t eaten any lunch. Last night’s left overs it is. Cold, obviously.

I manage to park really close to school and internally celebrate this smallest of victories. And I’m early! They haven’t come out yet. Look at me, rocking this mum-of-three thing!

I collect middle child from one gate. He runs off to play while I head to the other side of the yard to collect the eldest. She’s 10 minutes late coming out and runs off to find her brother (aka play with anyone who will play with her) while I shout after them that we need to go and collect their younger brother from the other side of the school. She has left her book bag in her classroom so we wait while she goes back in to get it. I don’t let middle child leave my side.

We’re last at the pre-school gates. How has this happened?! I was early!

Everyone piles into the car and I laden them with snacks before their blood sugar levels drop too low and they start arguing. It’s a mad dash home to make pasta for tea before heading back out for eldest’s Brownies. “Can we watch TV while tea is cooking?” they chime. “It’ll only be 10 minutes,” I say. “Why don’t you finish making those Christmas thank you cards?” I internally congratulate myself on not relying on TV to entertain children. 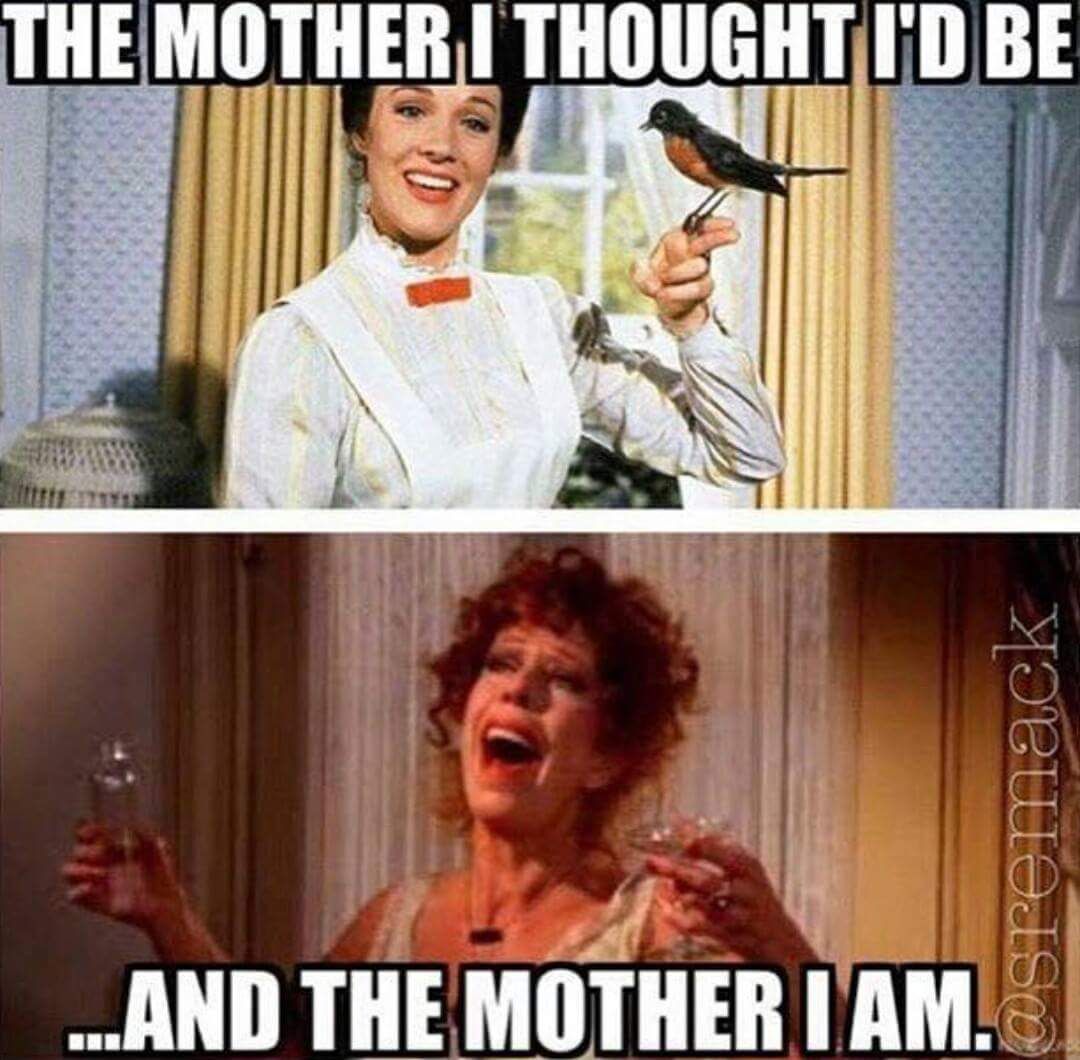 A slight variation on the theme… Miss Hannigan from the musical Annie.

And then Littlest accidentally spills the pens all over the floor and eldest flips out about making a mistake. “Right.” I say louder than is necessary. “Let’s put the telly on.” Where did that come from?! I didn’t even mean to say it.

Traffic is yet again crazy on the way to Brownies. Then there’s the chime of, “Mummy you still haven’t sewn on my badges.” How do people find time for all of this? “Why am I so rubbish at all of this?” I wail internally.

Thank goodness Cardiff Daddy can pick her up on his way home from work. I don’t have to leave the house again today.

It’s just the small matter of getting two boys to bed for me now.

We get there. Eventually. But not without rows over books; a refusal to clean teeth; tears because favourite pyjamas are not clean.

Dad and daughter get home just as I’m saying goodnight. And then no one wants to sleep. Too hot. Too cold. Too itchy. Can’t find a particular teddy. I can feel the rage inside me. I have a mountain of work and household admin to do when they are in bed and could really do with the three little people being asleep about now. Deep breaths.

Cardiff Daddy and I read them a story. Everyone sits nicely. We are rocking this family thing! We look like the Waltons.

All three are in bed… and then I get downstairs and see the mess of all the toys. How did I miss that happening when I was making the tea?! They know they need to tidy up before they eat. I contemplate leaving it until the morning for them to do it. But I can’t handle the mess and relent.

A friend messages to say she has had an equally stressful day and feels like a crap mum. “You are not crap,” I reply. “You are doing a flipping awesome job of juggling it all and some days can be impossibly hard.” I’m not sure if the message is more for me or for her.

Fast forward a few hours. I check on them before I go to bed (an hour later than I had intended to because I have been browsing crap on Facebook in an attempt to claim back some me-time after everything is done). I see them sleeping. Oh, they are so perfect and beautiful and the best children in the whole wide world. We’re so lucky! I’m inspired to start the next day afresh. I will be Mary Poppins. I will be calm and patient and not shouty.

Can you relate? Let me know in the comments below, on the Cardiff Mummy Says Facebook page or by tweeting me on @cardiffmummy

You can read all my posts on parenting here.