Toddler Boy I was playing happily on the kitchen floor recently with his toy cars, so I nipped to clean the adjoining downstairs bathroom. I could hear the sound of furniture scraping across the floor… and came back out to find him in the kitchen sink. Yes, actually IN the sink. He’d somehow managed to move a chair across the room, climb up onto it, and step into the sink.

My panic set in as I lifted my newly-turned-two-year-old up and out and told him in no uncertain terms he wasn’t to do it again. As all the what-ifs set into my mind – what if he’d fallen, what if the sink had been full of dishwater, what if there had been sharp knives in the sink – he walked off to the other side of the kitchen… and promptly pulled himself up onto the bench, and onto the table where he had a little dance. Again, I took him straight off, told him no and tried to distract him with some toys.

Incidents like this are not uncommon in our house at the moment. My youngest child is a climber… and it’s hard work! 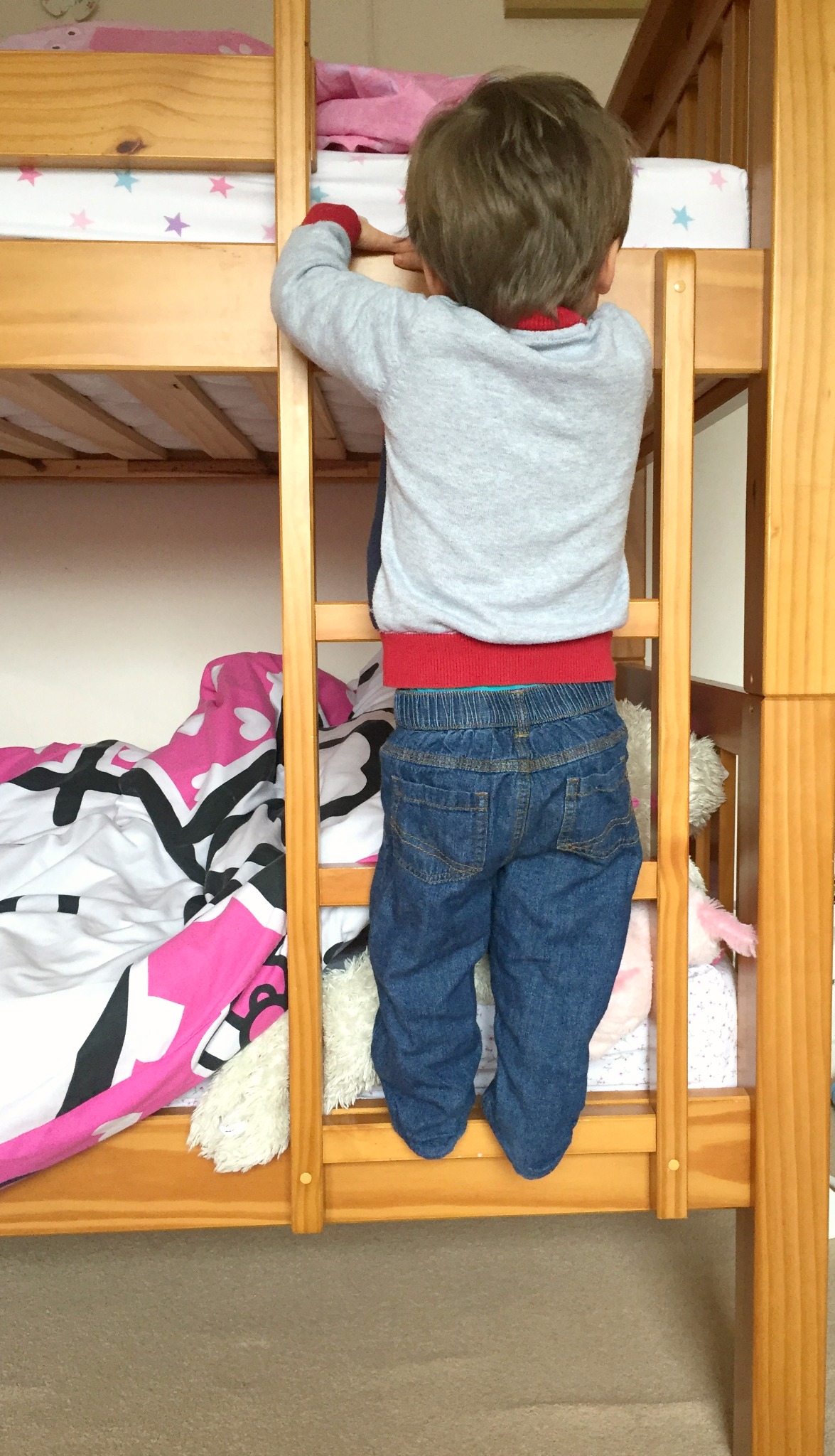 I don’t remember when it started happening. He wasn’t an especially early crawler or walker – eight months and 13 months respectively. But once he got going, that was it. His curious and exploratory nature sees him find the adventure in even the most innocuous of places. And as hard as I try, I seem powerless to stop him.

Recently at a local pre-school soft play, the two little girls we were with sat nicely building with the giant foam blocks together, sharing their snacks and generally being all shades of cute. Toddler, meanwhile, had discovered that if he stood on the seat of the ride-on he was playing on, he could dive bomb onto the foam blocks from a greater height. I distracted him from that game pretty quickly for fear he would injure himself or someone else. The three children moved to play on the slide. He did a good job of taking his turn – but instead of sitting on his bottom to go down the slide, or even his stomach to go head first, he stood at the top and drop-jumped down. I could see the terror in the faces of the two mums I was with – but he thought it was hilarious. And to be honest, this was nothing compared to his usual antics.

It’s the same at home. We have to keep an incredibly close eye on him in the bedroom of his big sister, Little Miss E, because he can climb the ladder on her bunk beds. He also recently discovered he could empty the contents of the washing basket, turn it upside down and use it to climb up onto the cupboard in the bathroom. The guy is the toddler world’s answer to an extreme sports adrenalin junkie.

I hope it doesn’t sound like I’m not keeping a close enough eye on him. I really am. I’m too scared not to. But inevitably there are moments when I’m helping his big sister or brother with something, or cooking tea or whatever… and in a flash he is gone from under my nose and is in search of his next adventure and I can’t always get to him as quickly as I’d like.

I think part of it is because he is the third child. Having been surrounded by older siblings and their friends since the day he was born, he thinks he’s one of the big kids. He loves nothing more than running around with the older boys and girls. If we’re at soft play, I can no longer fob him off with the toddler section. He’s clambering around in the over-5s play area, navigating the climbing nets and tunnels as proficiently as any school-aged kid…. with me running around after him, because although he thinks he’s invincible, he’s still only just turned two and doesn’t quite see the risk in the same way I do. 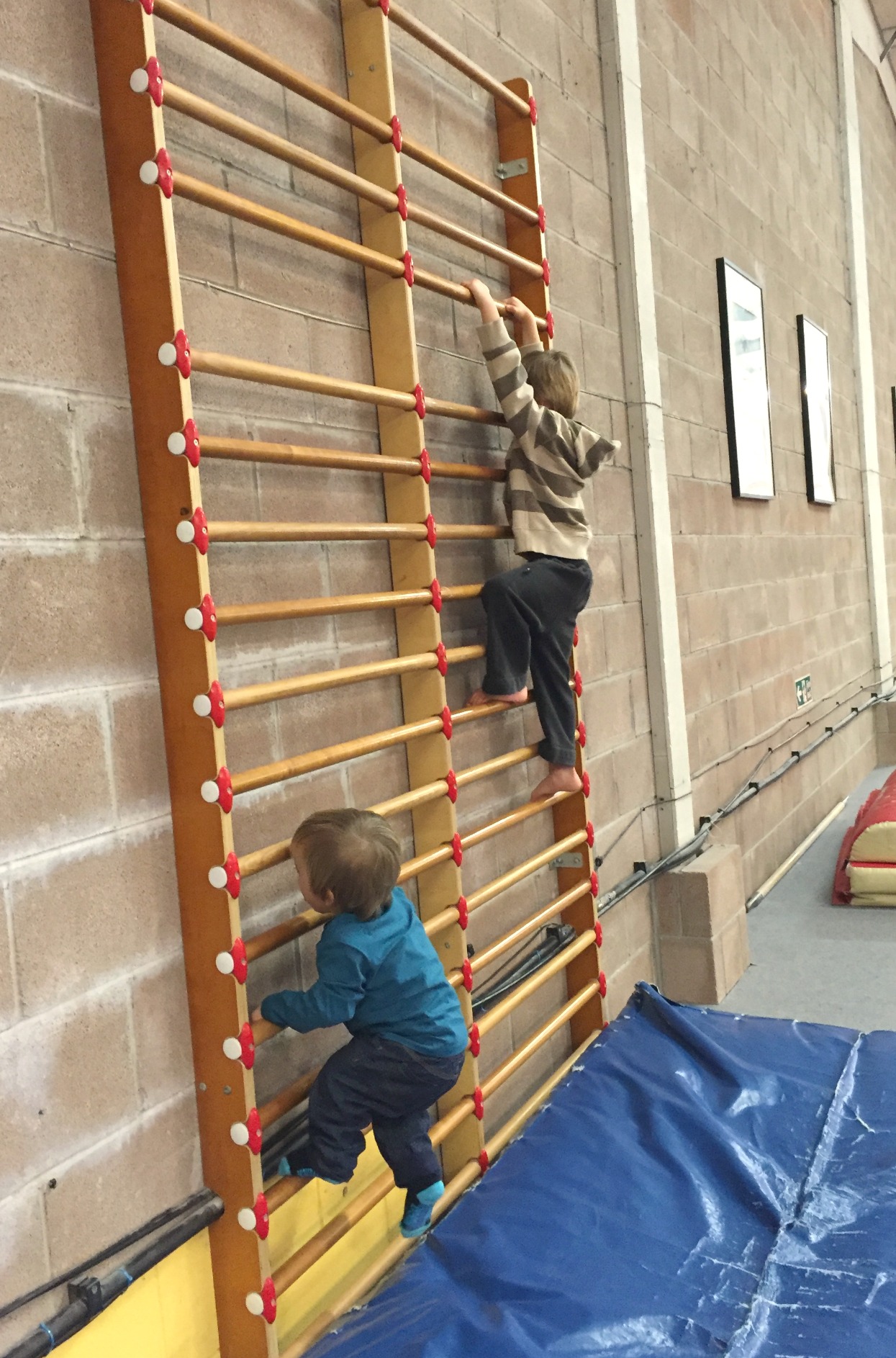 Another time at soft play, we were getting ready to go home. I’d put Toddler’s shoes and coat on and Little Man was doing his own. I started to put my boots on… and Toddler was gone! I ran after him but in a few seconds, he had managed to get right to the top of the multi-level climbing frame and was waving at me from the top of the giant slide. I tried to get to him as quickly as I could, as the slides are rather steep and fast and usually I’ll only let him go down them with me. He had other ideas though and by the time I got to the slide, he was on the other side of the soft play running around shrieking in excitement thinking we were playing a game of chase, completely unaware of my panic that he might fall and hurt himself.

Some of it is down to being the third child and experiencing life at a faster pace than his brother or sister did. But I think a lot of it is his personality. He is never happier than when he is running around and exploring. He especially loves being outside where there are no walls to contain him.

My other two children love soft play and the outdoors too. They both love exploring and climbing trees and the rest of it. But not to the same level as their little brother.

I wonder how much of it is down to gender. I’m sure there are girls with just as much energy as my Toddler – but it mostly seems to be boys. I have a friend with boy-girl twins who are about six weeks younger than Toddler. My friend had the shock of her life one day when she was taking a shower and the boy twin appeared in the bathroom. He’d been asleep in his cot but had managed to climb out. She says his twin sister would never do anything like this. Needless to say, he’s now in a toddler bed with a stair gate on his door… although if he’s anything like my Toddler, he’ll soon figure out that if he shakes and pulls it enough, it will open.

He does have moments when he’s still. He loves looking at books, for example, and pays brilliant attention at our weekly music class – but he’s far happier when he’s being active.

In the meantime though, I’ll continue to fill his days with activities I know he’ll enjoy in an attempt to burn off some of that energy. I’m also thankful he doesn’t seem to be in a rush to drop his afternoon nap, because come lunch time, I’m as exhausted as he is.

Can you relate? Do you have adventurous kids who never wants to stay still? I’d love to hear your stories in the comment section below, on the Cardiff Mummy Says Facebook page or you can tweet me on @cardiffmummy

You can see all my posts on my experiences of parenting in the Family Life section of Cardiff Mummy Says. 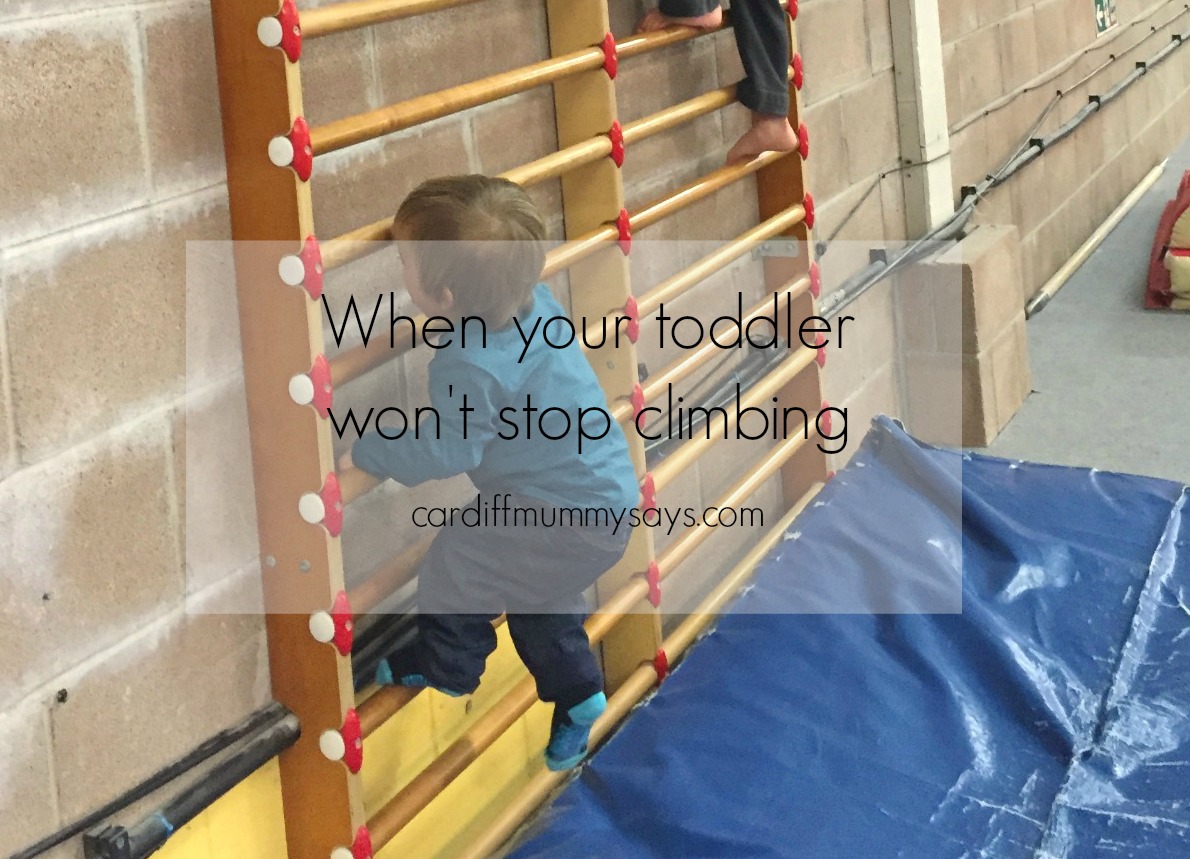 10 Comments to When your toddler won’t stop climbing