children's book of the week; books

A fun and quirky take on children’s counting books, I Can Only Draw Worms never fails to make us laugh when we read it.

It’s a simple book with basic illustrations and very little text but it’s such a great concept that it’s become a firm favourite in our house.

The book starts with Will Mabbitt telling us he can only draw worms. He draws worm one and worm two and realises he can’t tell them apart so gives the second worm glasses. Worm three is a different colour because the author has lost his usual pen. The author makes reference to exciting adventures the worms are having – but as he can’t draw them he says we’ll have to imagine them instead. One worm has an accident, thus making worm eight and worm eight and a half. You get the idea.

Amazingly the book only features four colours – yellow, hot pink, black and white – yet the bold and clear pages are very enticing. This one gets read a lot in our house. 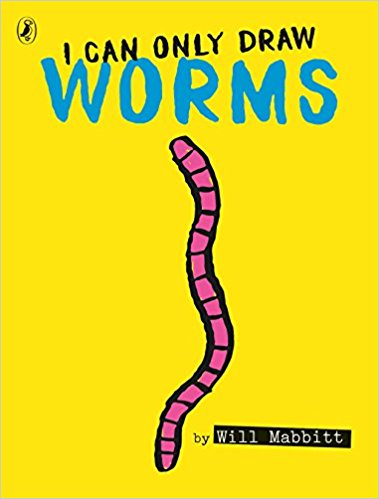 It’s reminiscent in tone of BJ Novak’s brilliant The Book With No Pictures and although I Can Only Draw Worms is a lot shorter it has the same quirky humour and silliness about it.

It’s a great read for children aged between about two and six offering an original take on the myriad of counting books out there.

I Can Only Draw Worms by Will Mabbitt, published by Puffin, £6.99 RRP

You can buy it here along with some of Will Mabbitt’s other titles.

* I am a member of Amazon Associates and this post contains affiliate links. This means that I receive a small commission if you order via this link. It won’t cost you any more.