I laughed until I cried. My children were creased over giggling. And my husband was booing and hissing louder than all the kids in the audience put together.

We had such a fantastic evening last night watching Beauty and the Beast, this year’s pantomime at the New Theatre in Cardiff. The show is traditional British panto at its best, with lavish costumes and set, mildly saucy humour that goes completely over the children’s heads, and so much audience participation I don’t think we were quiet all night.

I don’t want to give away too many surprises and spoil things for those of you planning on seeing it but over a whirlwind two hours and 10 minutes we witnessed stage-filling dance numbers; scary villains being defeated; friendship and romance and so much laughter and humour. 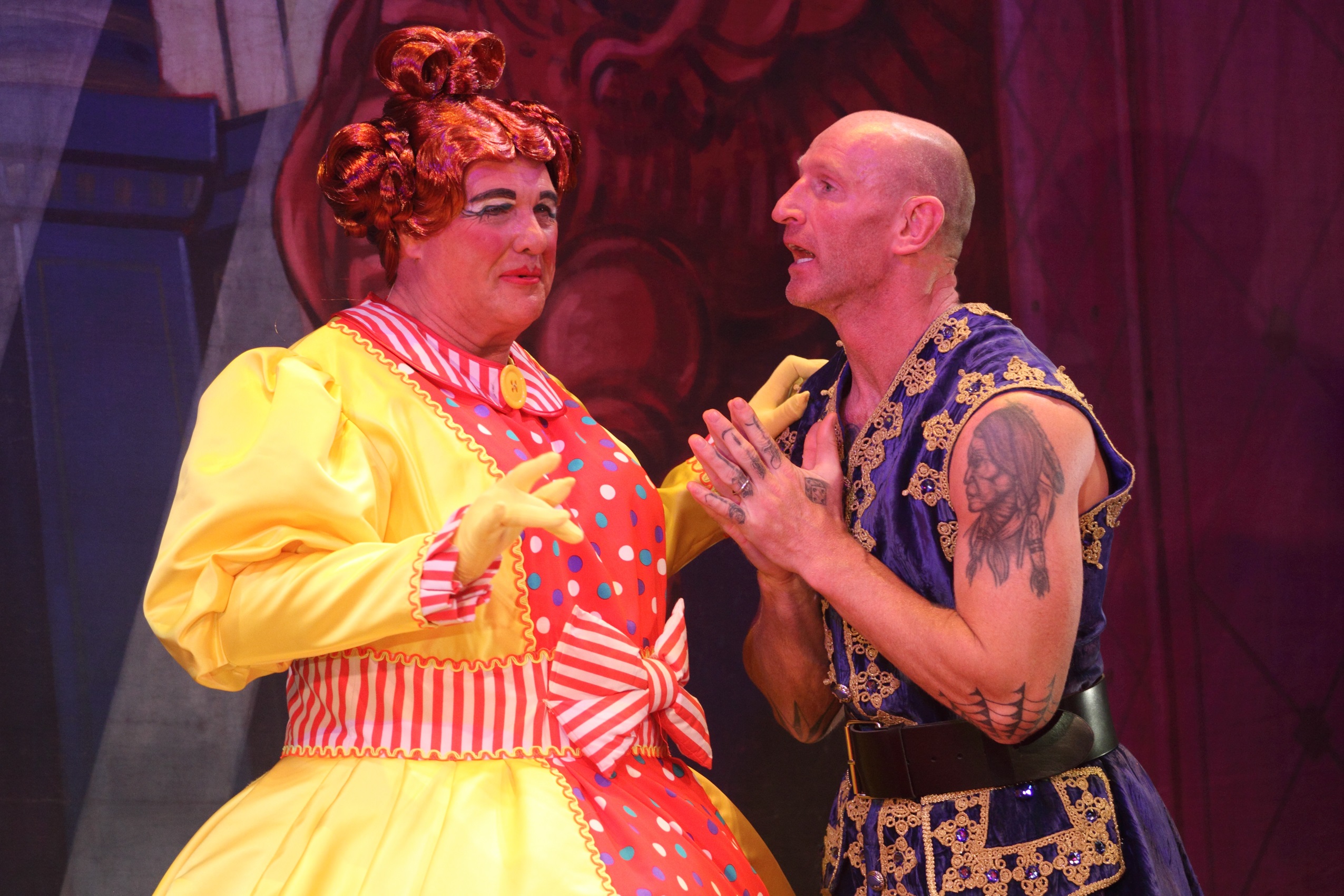 Several of the key cast members are panto regulars at the New Theatre and they have such a great rapport with each other, as well as the audience.

Former rugby player Gareth ‘Alfie’ Thomas – in his fourth panto season at the New – gets an incredible reception from the audience from the moment he steps on stage as fitness instructor ‘Alfie’.

Stephanie, who we’ve previously seen as Snow White and Mimi the Mermaid in Peter Pan, takes on the role of panto villain this year. Her character Deadly Nightshade puts a spell on the prince turning him into a beast until he can find someone to fall in love with him. It’s a role she clearly relishes, enjoying the audience’s boos and hisses and cackling away at her evil deeds. 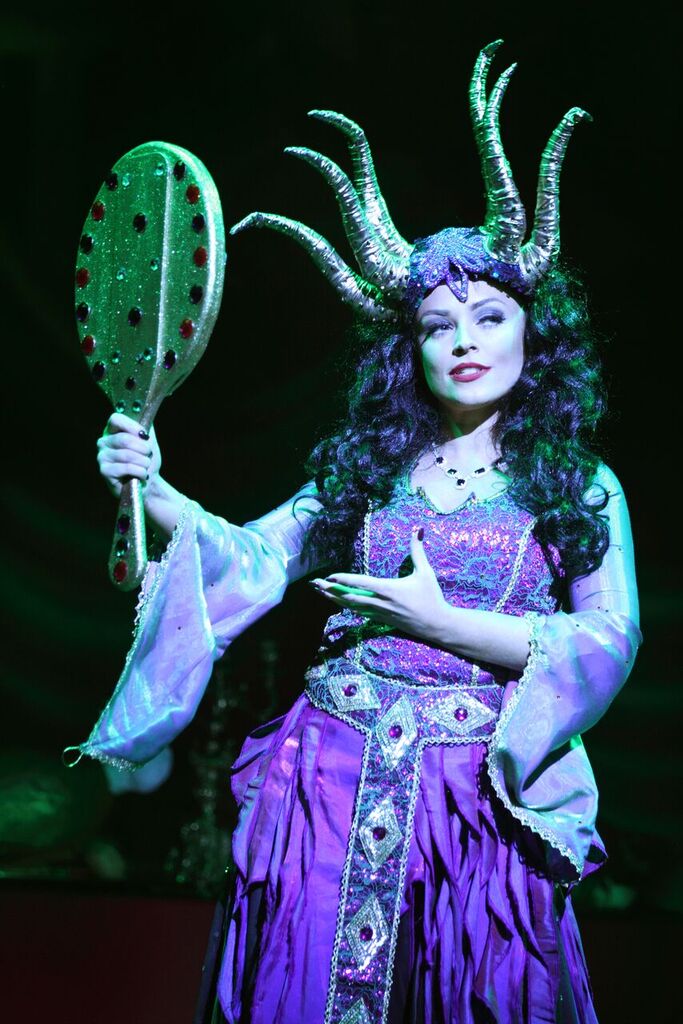 We were so pleased to see Mike Doyle back in the role of Kylie Kipling, the show’s panto dame. He’s a truly brilliant performer with the ability to perform some hilarious antics with a dead-pan face and to not take himself too seriously. Special credit must also go to the wardrobe department who, year after year, dress him in the most amazing flamboyant and eccentric costumes.

Doyle has some of the funniest moments in the show with two in particular leaving everyone shrieking with laughter. His musical number with ‘friends’ Pinky and Perky (I’m not going to elaborate any further as you need to see it for yourself) and the fitness class he takes with Alfie are some of the most surreal panto moments I’ve ever seen. Both of these had me laughing so much I had tears coming down my cheeks. Doyle has a great rapport with Edward Rowe who plays Kylie’s son, Calvin Kipling. Rowe also has a series of great one-liners and comedy sketches as well as some great banter with audience members. 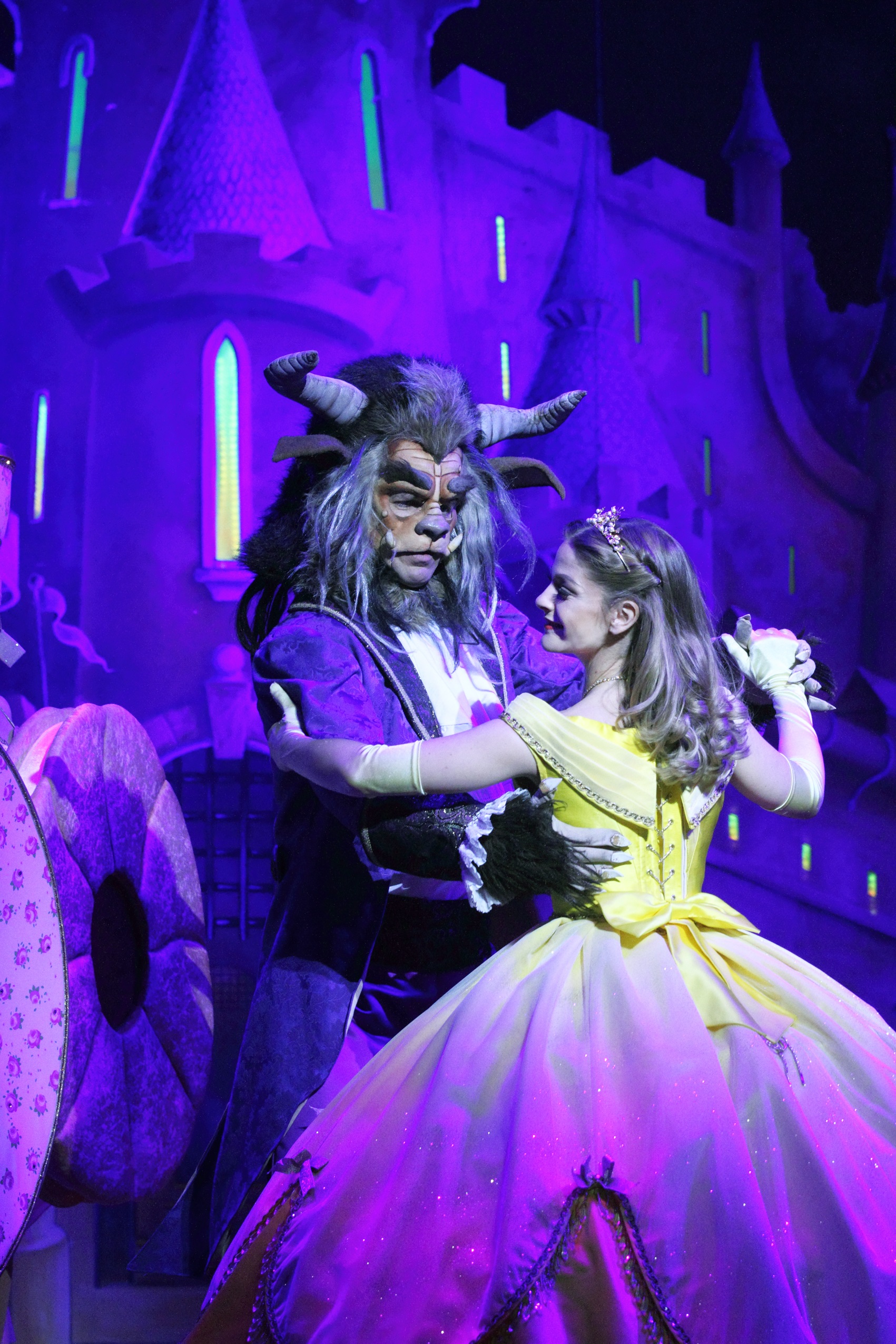 Naomi Slights and Ben Richards play Belle and the Beast while Danny Bayne is Clarence Bridge, the muscular conceited oaf who plans to wed Belle. He balances just the right amount of over the top comedy with some of the show’s darker moments as he leads the villagers to kill the beast. All with the most brilliant of facial expressions. Emmerdale and Strictly Come Dancing star Lisa Riley plays housekeeper Mrs Potts. She’s warm and friendly and shows us some brilliant dance moves, much to my Strictly-loving children’s delight. 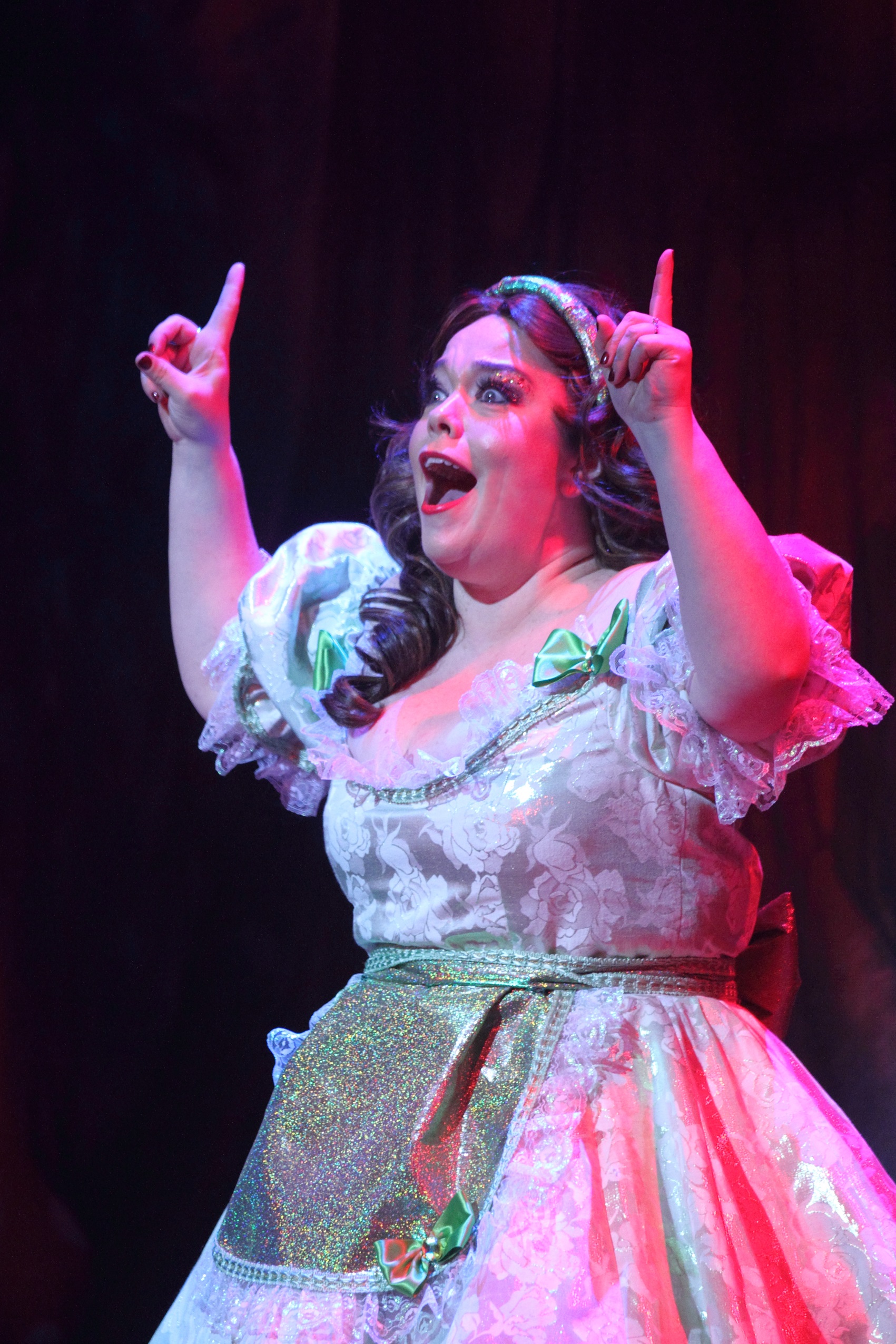 Musical numbers include everything from Aretha Franklin’s Think and a couple of tunes from The Greatest Showman to a rendition of cult YouTube hit Baby Shark and a take on Clean Bandit’s Symphony. There were some fun choreographed ensemble routines, with the ‘aww’ factor going to the young children of the Lori Guppy dancers dressed as salt and pepper pots and other kitchen staples.

My four year old found it slightly scary in parts, in particular the kraken monster created by Deadly Nightshade. However we’ve taught him to boo and hiss the baddies which definitely helped ease any worries, plus the show was so slickly fast-paced that these darker moments never lasted long. For the most part, he was laughing along with the rest of us. 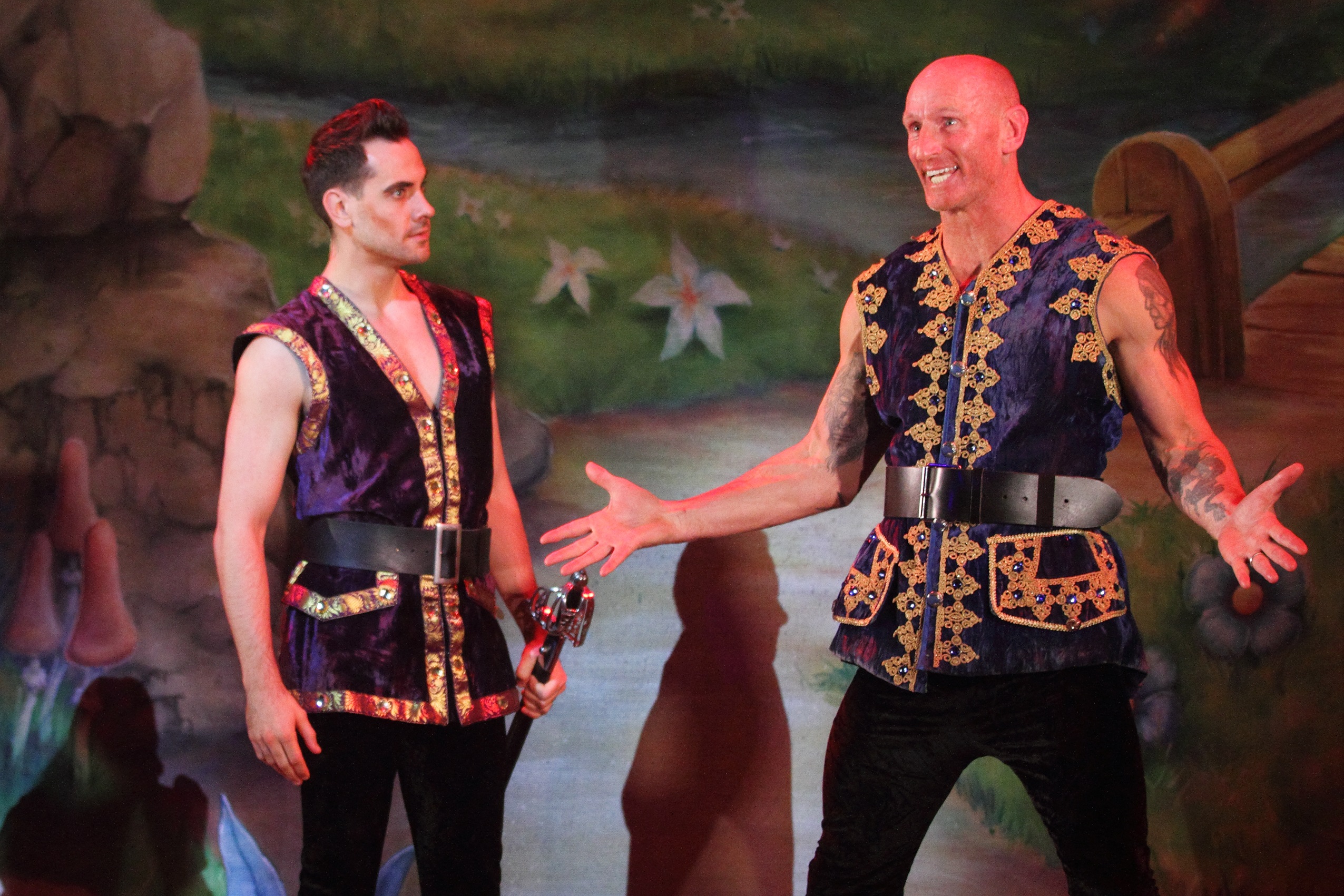 Once again Cardiff’s New Theatre and Qdos Entertainment have produced a brilliant Christmas panto that will entertain the whole family. Proper belly laughs, plenty of audience participation, and a happy ever after ending, make this perfect seasonal entertainment and escapism.

Beauty and the Beast is at the New Theatre Cardiff until Sunday 13 January 2019. For more information call the box office on 029 2087 8889 or visit the website here.