As regular readers of Cardiff Mummy Says will know, we love visiting these two family-friendly attractions so I’m thrilled to be working in partnership with them. Both are free to visit (although you will have to pay to park at St Fagans) and are perfect for families. Over the next few months, we’ll be reporting on our visits to both museums, as well as letting you know about their special events and activities.

Next week, I’ll be telling you more about our recent trip to St Fagans, as well as their forthcoming food festival on Saturday 10th and Sunday 11th September.

In the meantime though, here’s how we got on visiting Treasures: Adventures In Archaeology at National Museum Cardiff, which is running until Sunday October 30th 2016. 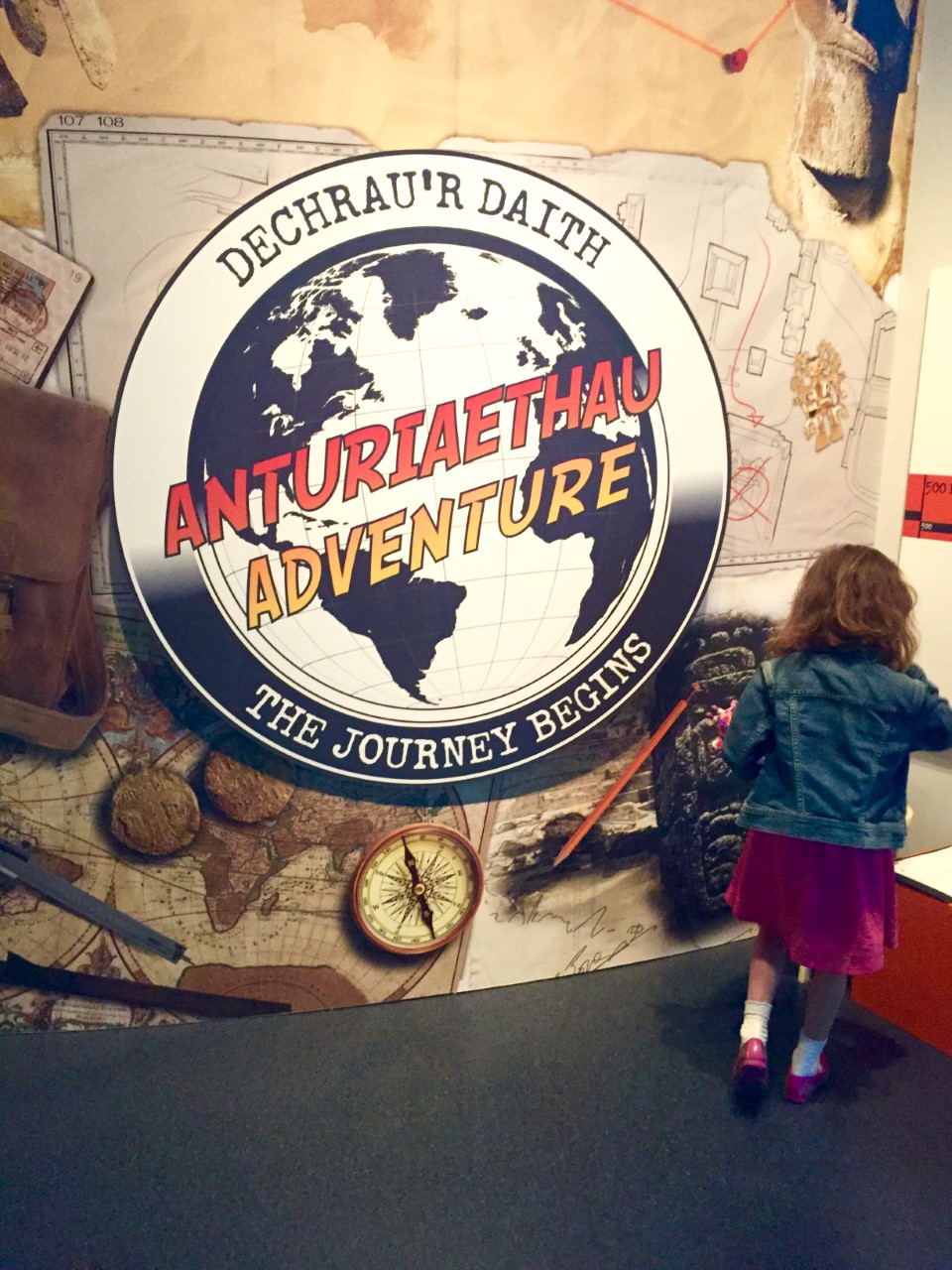 It’s no secret that I’m a bit of a history geek. I’m fascinated by the past and since becoming a mum have loved taking my children to the castles and museums of Wales and beyond.

My eldest two, Little Miss E, age 6.5 and Little Man O, almost 5, are beginning to understand different historical periods and are fascinated with Egyptians, Romans and Vikings in particular. They’re also understanding that these items haven’t always been in museums; that people have discovered them and that these people are often archaeologists.

So, we were delighted to be asked to visit Treasures: Adventures in Archaeology as part of our new role as blogger ambassadors for National Museum Cardiff and St Fagans National History Museum.

The exhibition has been running since January and is open for just over another two months until Sunday October 30th.

Although the rest of the museum is free, adults have to pay £7 to enter Treasures, with concessions £5. Children aged 16 and under are free.

I know some people will question the cost at an otherwise free attraction, but when you see the rare, ancient and significant artefacts inside, you can understand why. 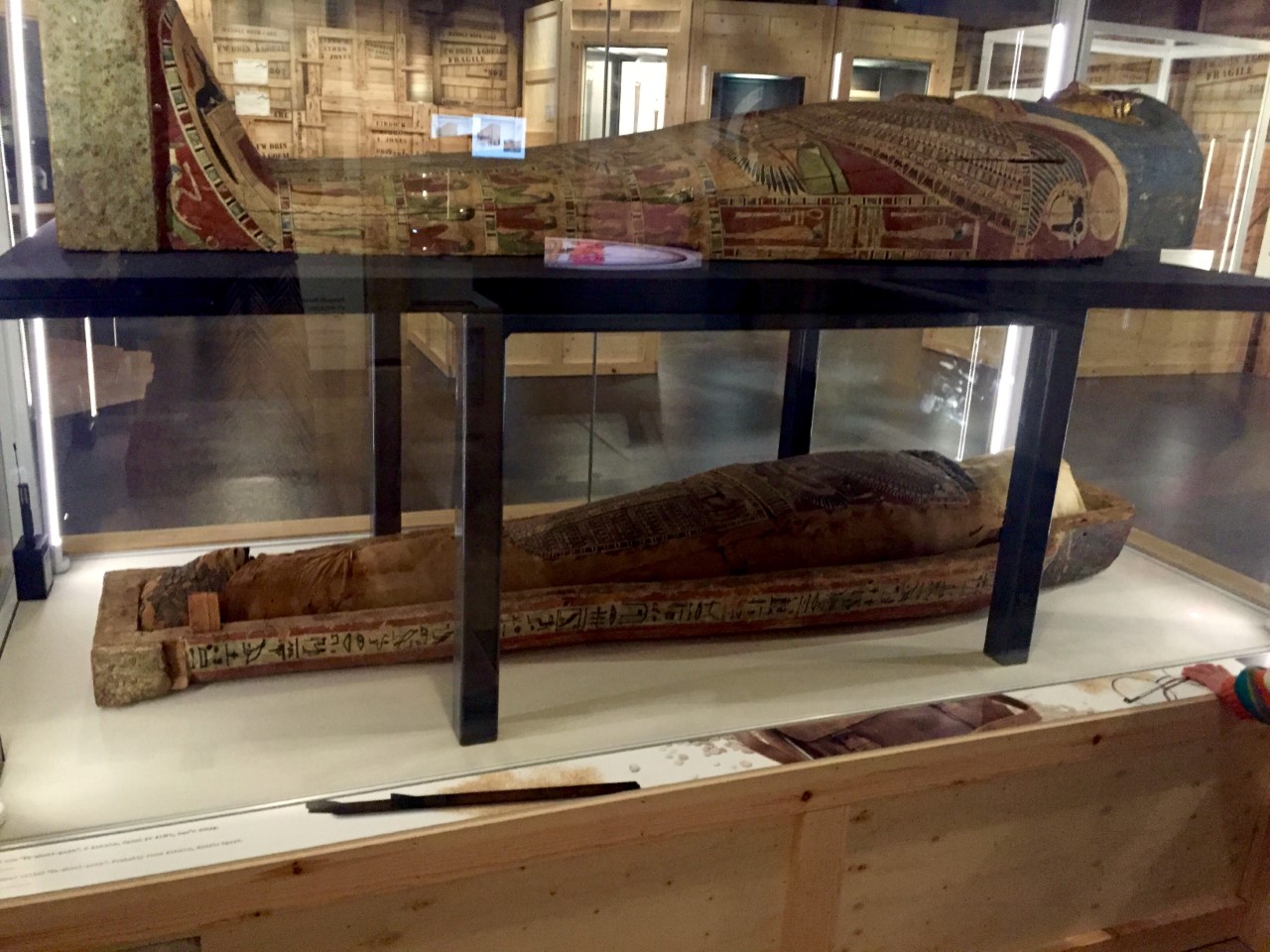 Highlights include an Egyptian mummy in a beautifully ornate coffin, plus other Egyptian artefacts; human skulls from Viking-age burials in Anglesey; a Corinthian helmet dating back to 750-650BCE; piles of ancient coins found in Wales; plus the actual jacket, hat and whip worn by Harrison Ford in the Indiana Jones films. Many of the items are on loan to National Museum Cardiff from across the world, and photos are not allowed as part of the conditions of the loan. We had permission to take a few photos to show you the exhibition, although a lot of the objects were out of bounds!

I’d say the exhibition is best suited for children aged five/six and over. The artefacts are accompanied by a lot of written information and not as many interactive displays as some of the museum’s other exhibition. It kept my eldest two fascinated for around an hour but it was too much for my toddler who got bored quite quickly and ended up being taken outside by Cardiff Daddy, while the rest of us continued looking around. 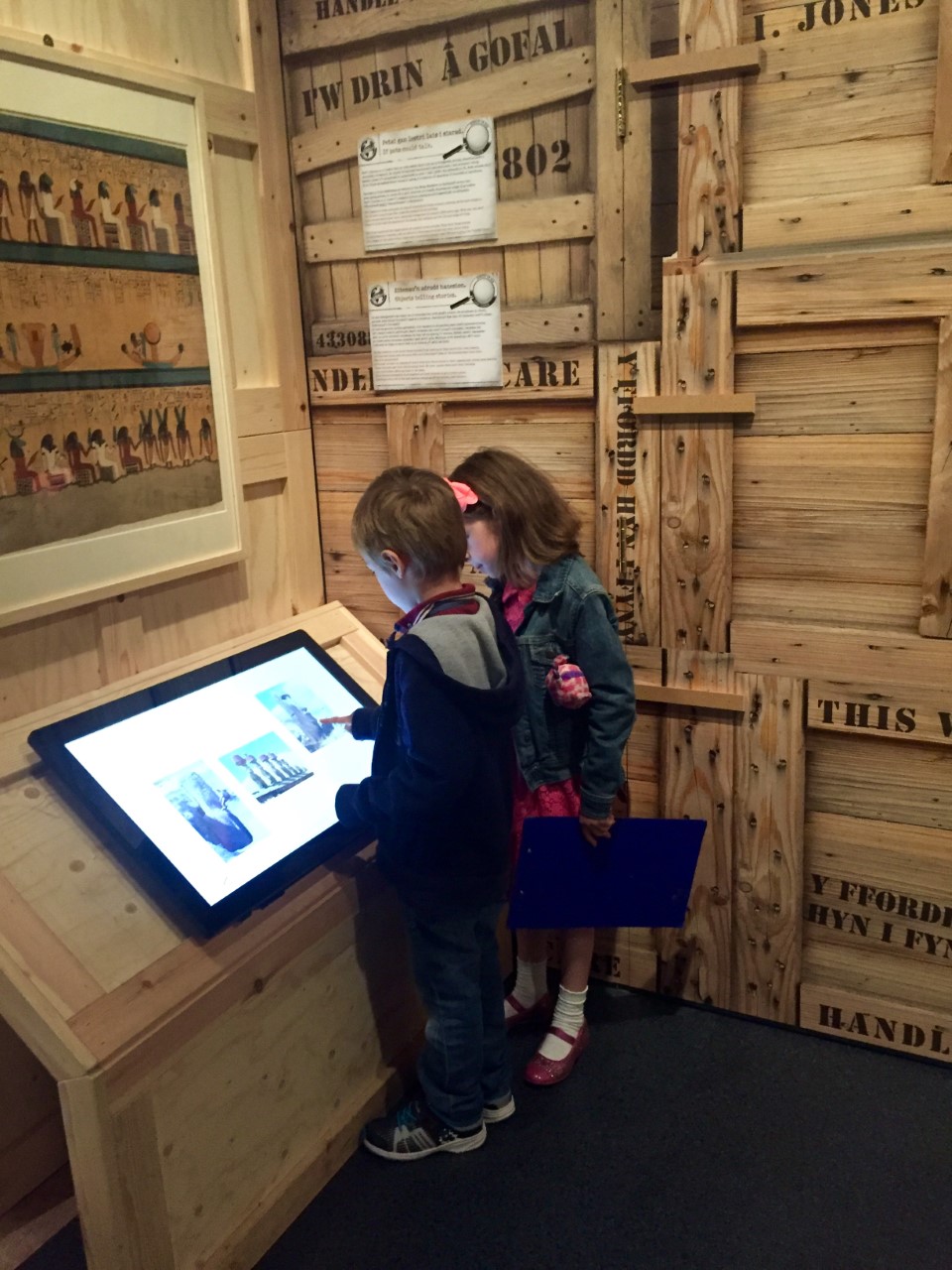 You’ll get the most out of the exhibition if you can take your time wandering around and reading the information displays in detail. I feel I learnt so much about prominent archaeologists and major discoveries – not a subject I really knew a lot about before.

I loved learning about the Mask of Agamemnon, a gold funeral mask. This is one of the most famous treasures to be discovered by the acclaimed archaeologist Heinrich Schliemann as he excavated at Mycennae in Greece in 1876. Shliemann believed he had discovered the body of the legendary Greek leader Agamemnon, although the mask is actually from an earlier period, around 1550-1500BCE.

Schliemann was also claimed to have discovered the city of Troy, which until that point people thought was a legend. However, the world of archaeology is not without its controversy as a British archaeologist Frank Calvert had already started digging at the site. Schliemann didn’t give Calvert due credit, nor the Greek archaeologists who worked with him, and even smuggled some of the treasures out of the country! 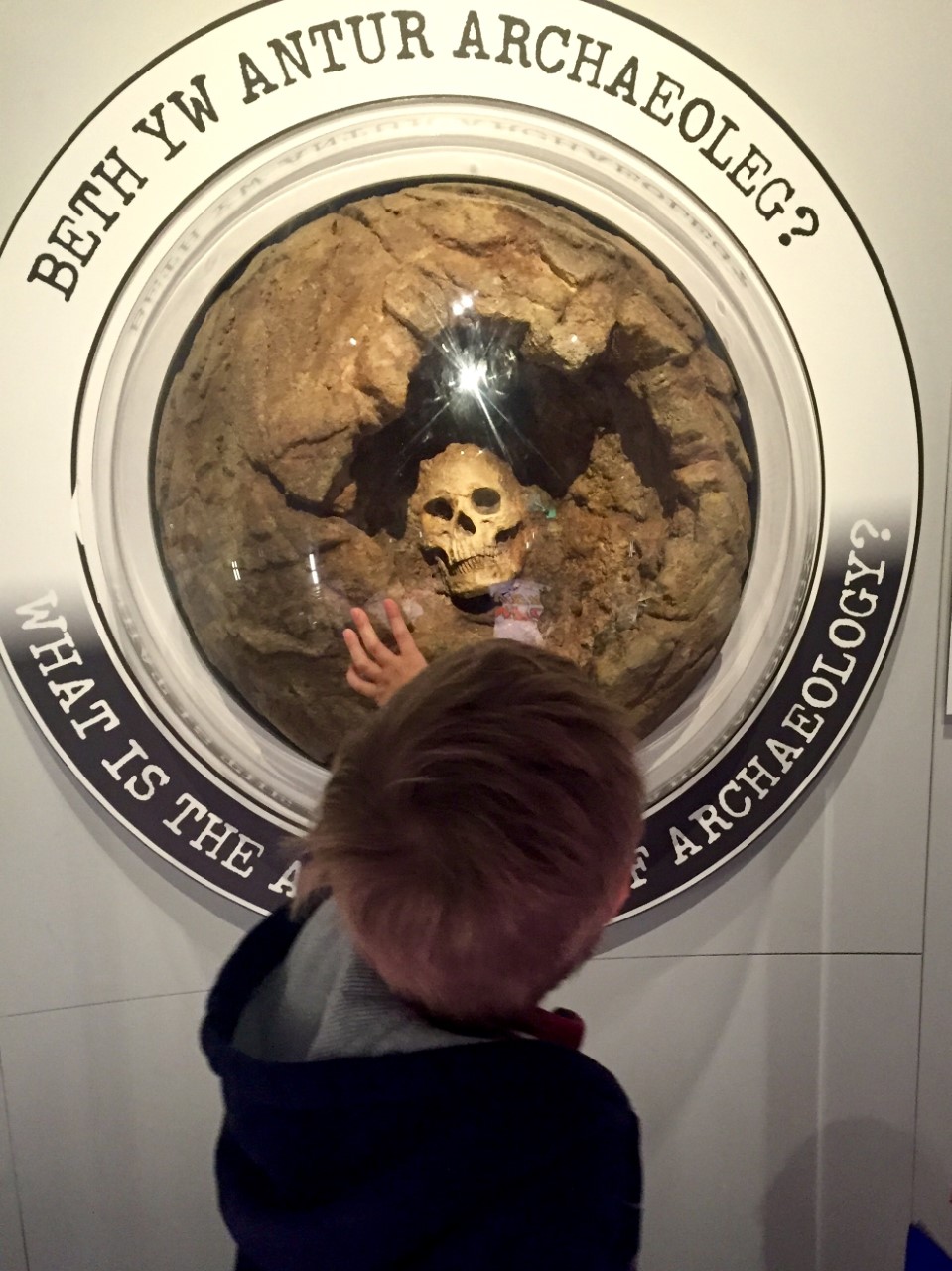 It was great to see female archaeologists being celebrated, such as Adela Breton, who came to prominence in the male-dominated Victorian era, in particular for her drawings of the walls of the Mexican temples. The wall paintings themselves have since been damaged, but her art work means we still have records of how they looked. Closer to home, we were excited to see a notebook from Tessa Wheeler’s excavation of the Roman amphitheatre in Caerleon, which we recently visited (more on that soon!) in 1926-27.

There are also artefacts discovered quite by chance, such as a haul of Roman-age coins and rings, which were found buried in the ground in Sully by workmen building a road. 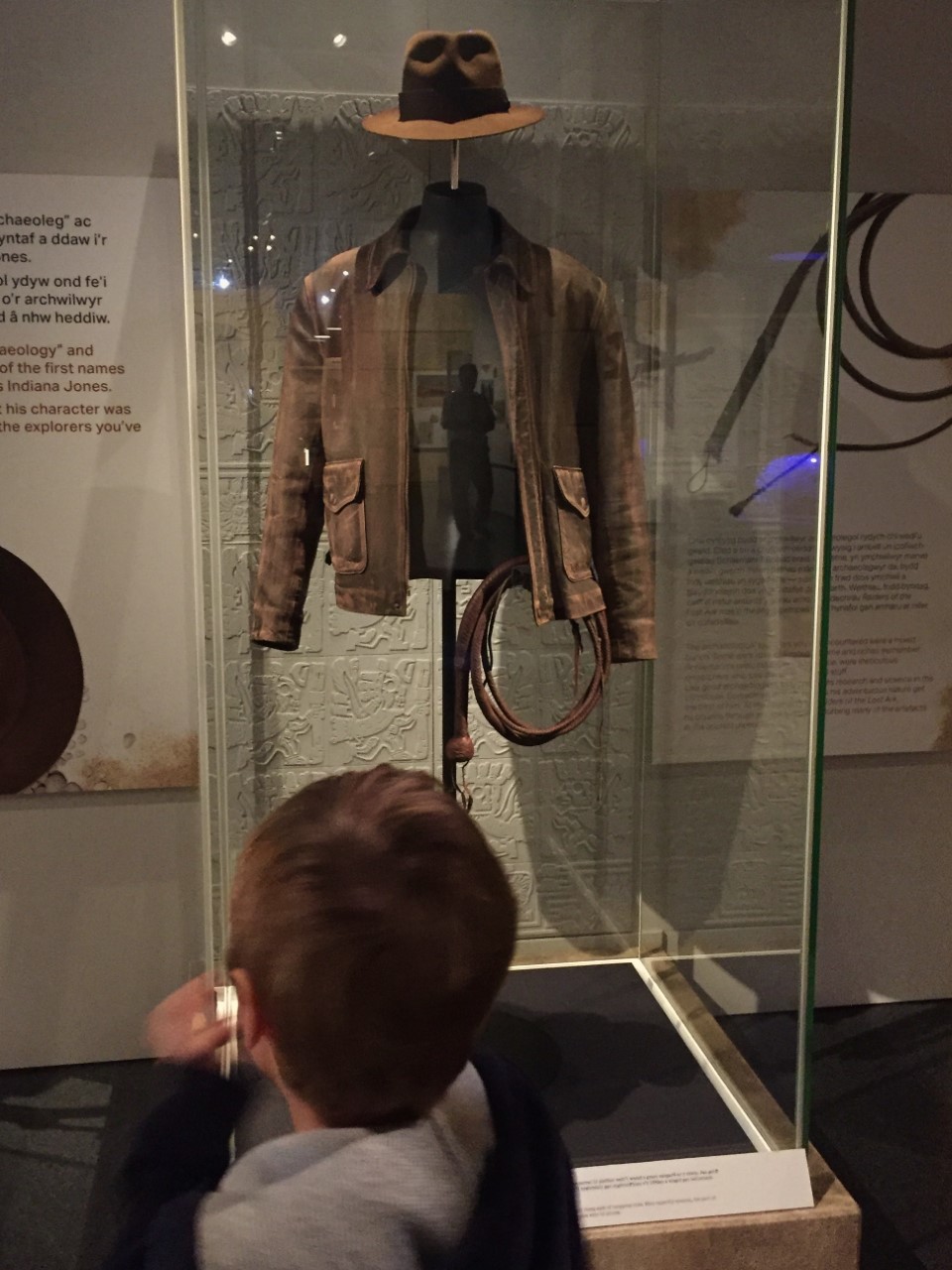 There’s a section on archaeology in popular culture, with the jacket, hat and whip from Indiana Jones being the big highlight, as well as a crystal skull from the film Indiana Jones and the Kingdom of the Crystal Skull.

Although Indiana is probably the world’s most famous archaeologist, fictional or otherwise, as a short film in the exhibition points out, life for archaeologists is certainly not that dramatic and exciting. They’re more like detectives, piecing together clues, than adventurers.

Once we’d finished in Treasures, we headed once again to see Quentin Blake: Inside Stories and Wriggle: The Wonderful World of Worms, as well as the dinosaur replicas and skeletons the museum is perhaps most famous among children for.

Treasures: Adventures in Archaeology is at National Museum Cardiff until 30th October 2016. Please note the museum is not open on Mondays.

Due to the nature of the exhibition, entry will be available at timed intervals, so the museum recommends booking in advance to avoid disappointment. The admission desk at the museum will only sell tickets to visit on the day, subject to availability.

Cardiff Mummy Says has two pairs of adult tickets to give away for Treasures: Adventures in Archaeology, thanks to National Museum Cardiff.

For a chance to win, just leave your answer to the question below on the Treasures post on the Cardiff Mummy Says Facebook page. Deadline for entries is Tuesday 23rd August 2016, 11pm.

Q. Treasures features the jacket, hat and whip worn by Indiana Jones in the film series. But which actor played Indiana?

The winner will be notified by Facebook. There is no alternative prize.

1 Comment to Treasures: Adventures in Archaeology at National Museum Cardiff