It’s Mothering Sunday next weekend and The Red Dragon Centre in Cardiff Bay invited us along today for an early treat, as part of our role as blogger ambassadors for the centre.

Our day included my choice of film at the Odeon cinema complex – the newly-released Beauty and the Beast, of course! – plus lunch at Grill & Shake.

Given it’s been non-stop rain today, the Cardiff Bay entertainment complex was the perfect place to be, with everything under one roof and free parking just outside (subject to minimum spend and validation). 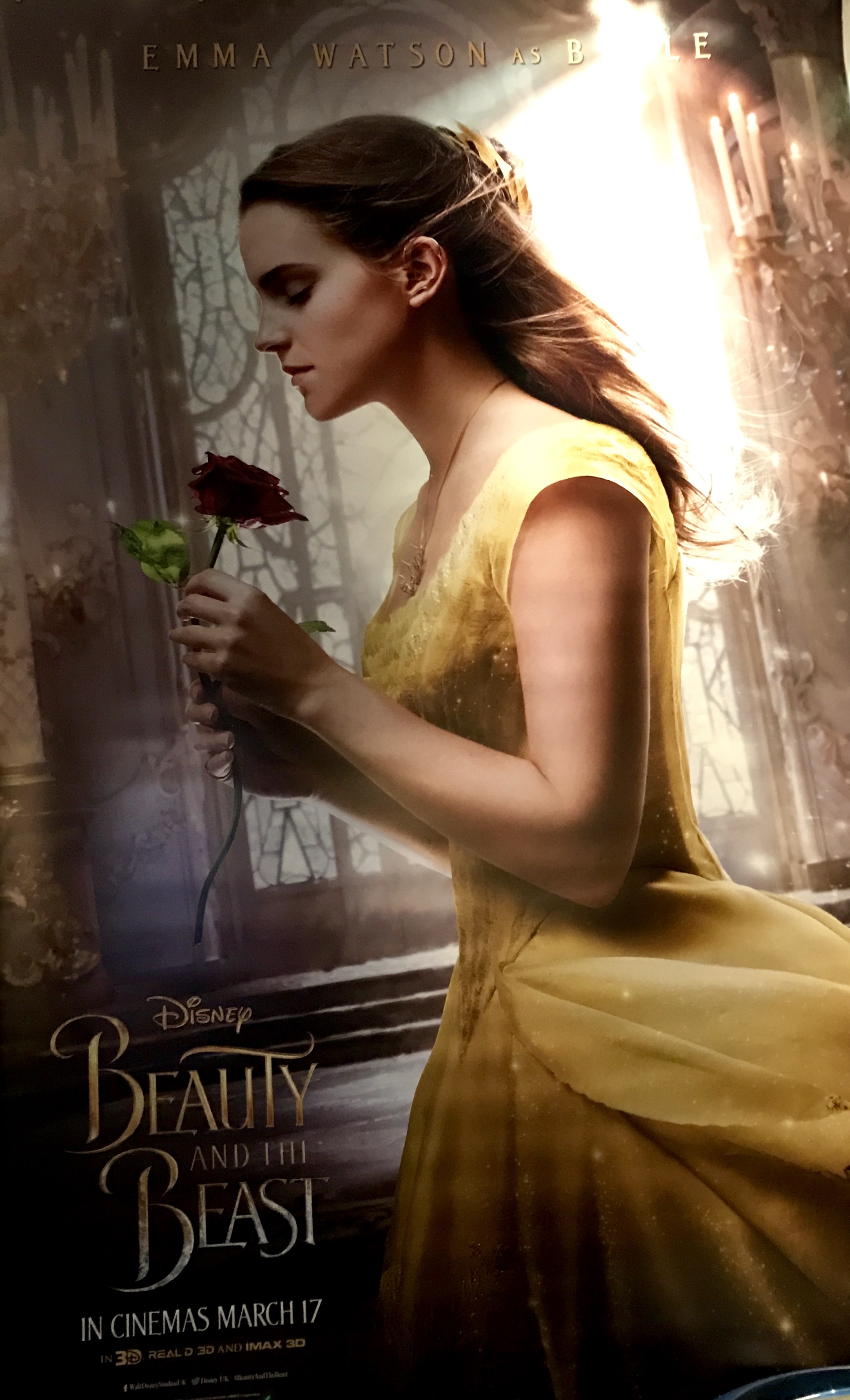 Disney’s new version of Beauty and the Beast is a live action remake of the classic 1991 animation. The plot of the famous fairytale is a familiar one – a beautiful young woman is imprisoned by a cruel beast, who turns out not to be a beast at all, but an arrogant prince with a curse set upon him. The curse can only be broken if he falls in love with someone who loves him back too.

Fans of the original will love that the new film sticks so closely to the story they know and love. It has all the magic and passion of the Disney original, but is slightly darker and also gives more of a back story to some of the key characters, which was missing from the original.

I’ve read so many negative reviews of the new film that I must admit I was a bit apprehensive about what to expect. It’s been criticised for failing to live up to its feminist promises, and for not really offering anything that you don’t already get in the animated version.

I’m not even getting into the debate as to whether a film whose whole premise is Stockholm Syndrome can ever be feminist, I’m just going to take it on face value and tell you I absolutely loved it. It made me laugh, it made me cry, it tugged on my heart strings, it had me singing along. And I really, really want to see it again. 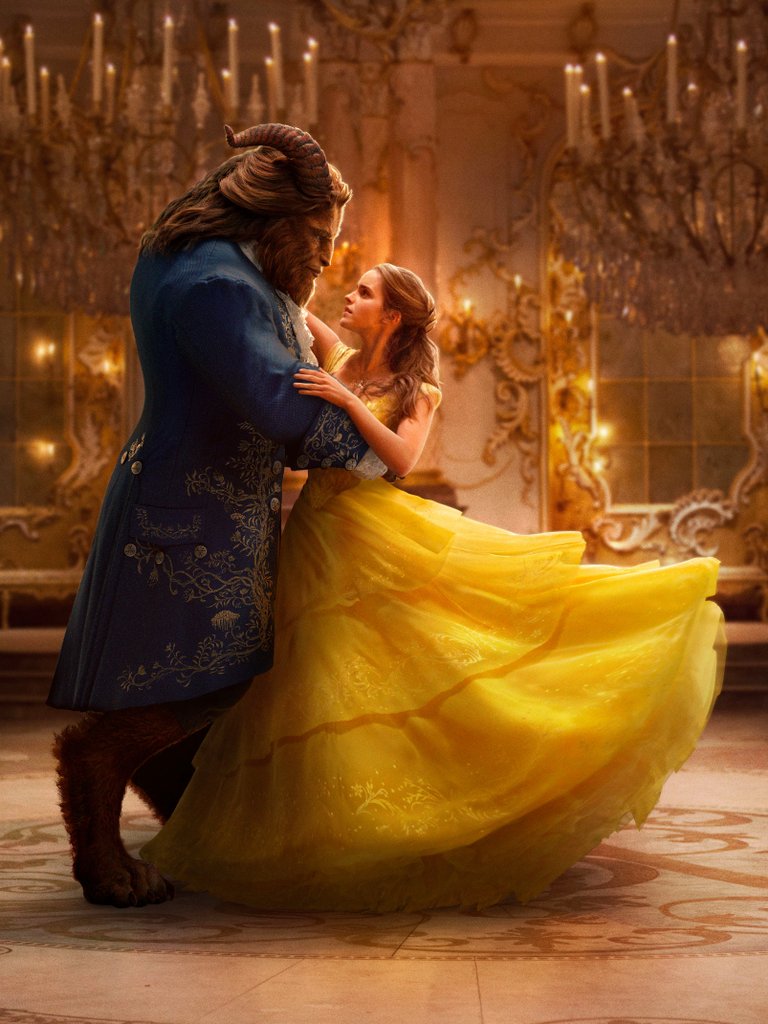 Emma Watson as Belle is feisty, strong, fearless, clever and independent, as well as warm and endearing. And, if it’s not anti-feminist to say it, utterly beautiful too, especially in the amazing yellow ballroom dress. Oh, how I want one of my own!

Dan Stevens as the Beast is mean and frightening to start with, but the transformative power of love sees him mellow into a kind and caring creature who will sacrifice his own  in the name of love.

Dare I say it, once he has a good bath and a wash, he actually scrubs up quite well – and I had to laugh towards the end of the film when when Belle asks the now-prince if he’d consider growing a beard, and he growls at her.

Little Miss E, my seven-year-old daughter, and Little Man O, my 5 ½ year old middle child – are sensitive little things, and did find parts of it frightening, the wolves in the woods on the way to the Beast’s castle, for one. But with lots of tight cuddles we managed to ride out the scary bits, and they enjoyed the rest of it. 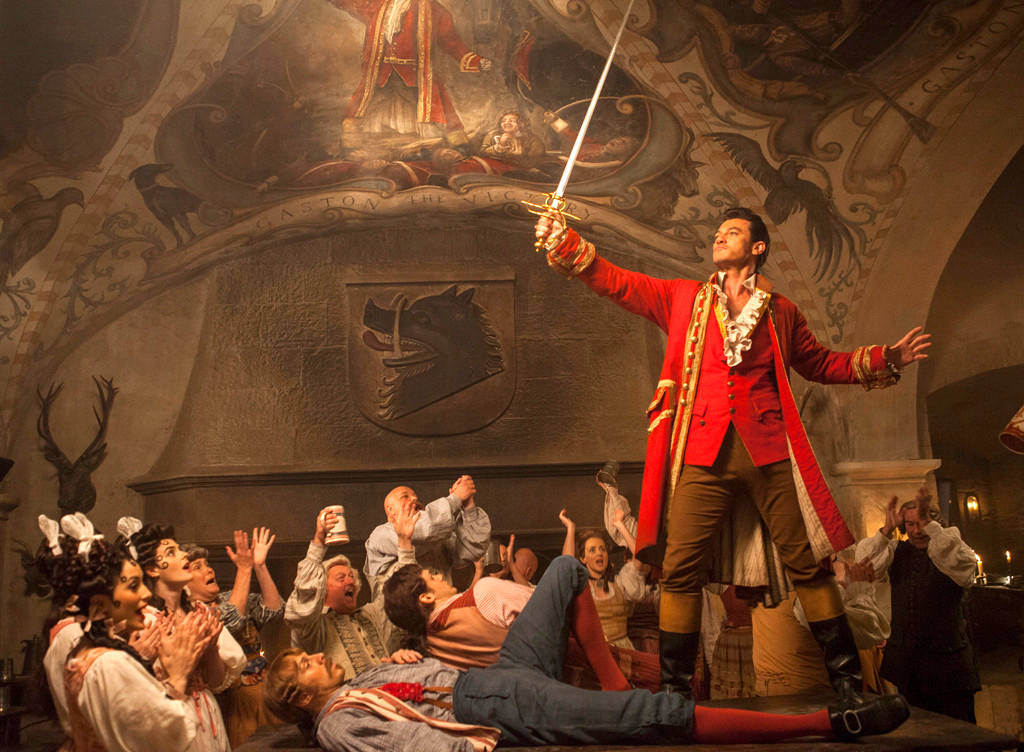 Pontypool’s Luke Evans is brilliant as Gaston (pictured above), as utterly vile and arrogant in his unrequited pursuit of Belle as the character demands. It’s great to see his sidekick LaFou, played by Josh Gad (best known for voicing Olaf in Disney’s Frozen) having more of a complex character than his animated counterpart. As has been highly publicised, he’s the first openly gay Disney character, although it’s a very subtle portrayal. This diversity is see elsewhere in the film, when the household objects return back to their human selves and we see inter-racial couples and love in all its guises. 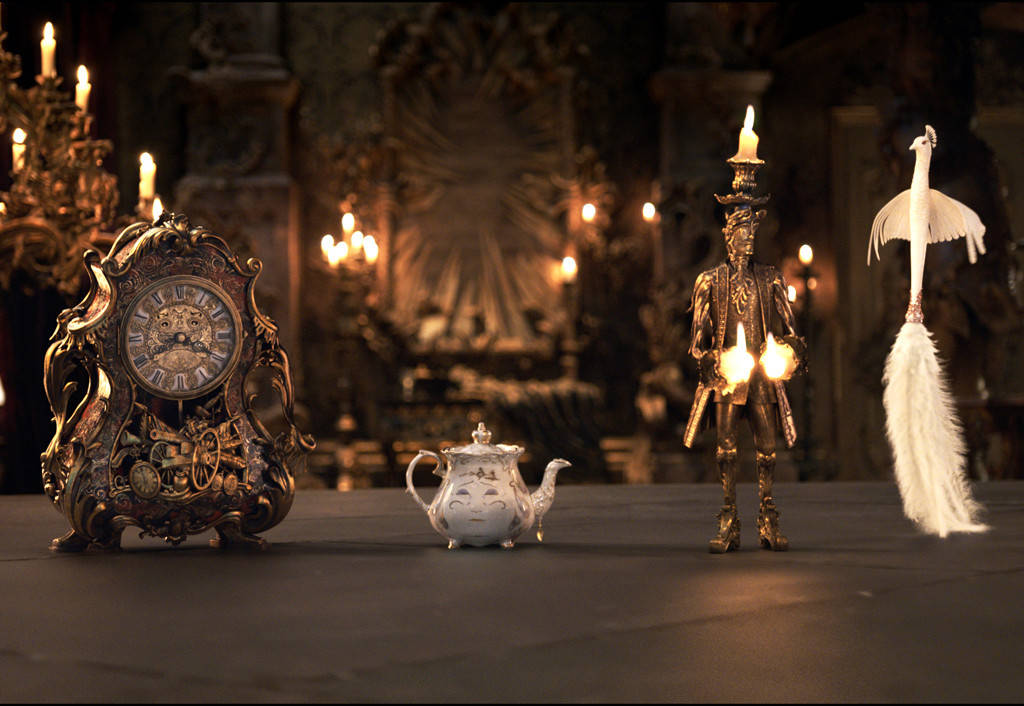 The film follows the animation quite closely, and although there are differences, many of the key scenes are exactly as you would want them to be. The special effects are incredible, especially in the characterisations of Lumiere (Ewan McGregor), Cogsworth (Ian McKellan), Mrs Potts (Emma Thompson), Chip (Nathan Mack) and the rest of the former-household-staff-turned-household-objects. The house itself is jaw-droppingly beautiful, even in its state of dust and decay.

I was so pleased to see all the big musical numbers from the animation recreated here in the film, including Lafou’s rousing rendition of Gaston and the show-stopping Be Our Guest. There are four new songs in this film version, with How Does A Moment Last Forever particularly standing out.

I don’t want to give too much away about the film (although the plot isn’t much of a surprise for most people) but there were tears in my eyes towards the end when it looked like the curse would not be broken. It ended beautifully, with all the happy ever afters you would expect from a fairy tale. 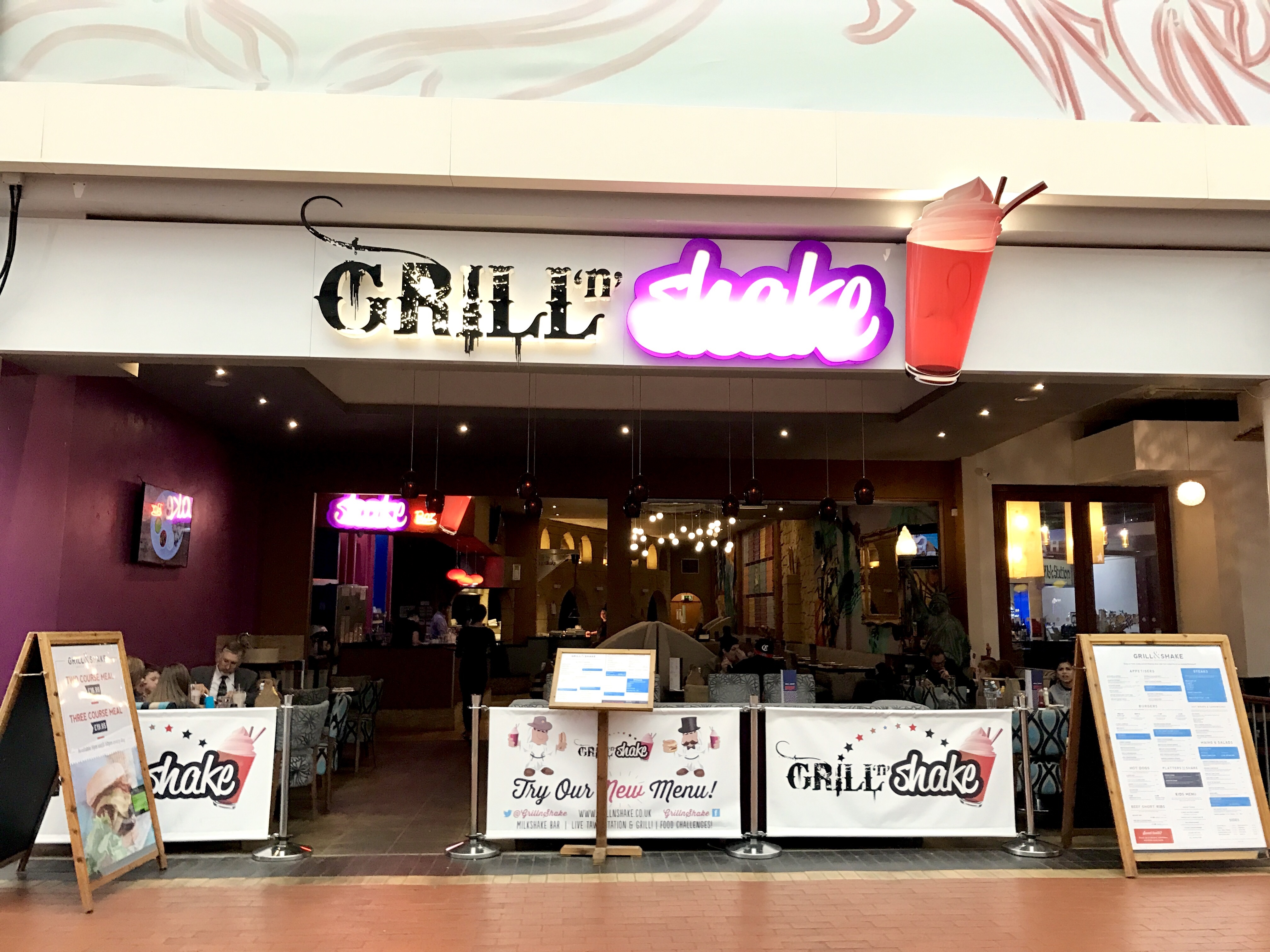 After the film, we headed to Grill & Shake for lunch, an American-style diner serving up burgers, steaks, fries and milkshakes.

It would be easy to dismiss Grill & Shake as being yet another generic fast food joint – but we were impressed with the fast and friendly service, the quality of the food, the generous portions, and the attractive presentation.

Much of this is down to new head chef Panneer, who has a background in hotels and cruise ships. He and new manager Anand are applying the same high standards to the food at Grill & Shake, upping the standards of everything they already do.

We shared starters between the five of us, opting for a platter of nachos, and mozzarella sticks. The Cajun spiced mayonnaise that accompanied the latter was delicious.

The children’s menu had a choice of six meals, priced £4.95 each, with Little Miss E opting for chicken tenders (strips of chicken coated in fresh breadcrumbs and deep fried) and chips and both my boys choosing twisted mac and cheese bake, with macaroni cheese being one of their favourite meals. The other choices on the menu are burger, fish finger burger, chicken burger and hot dog. 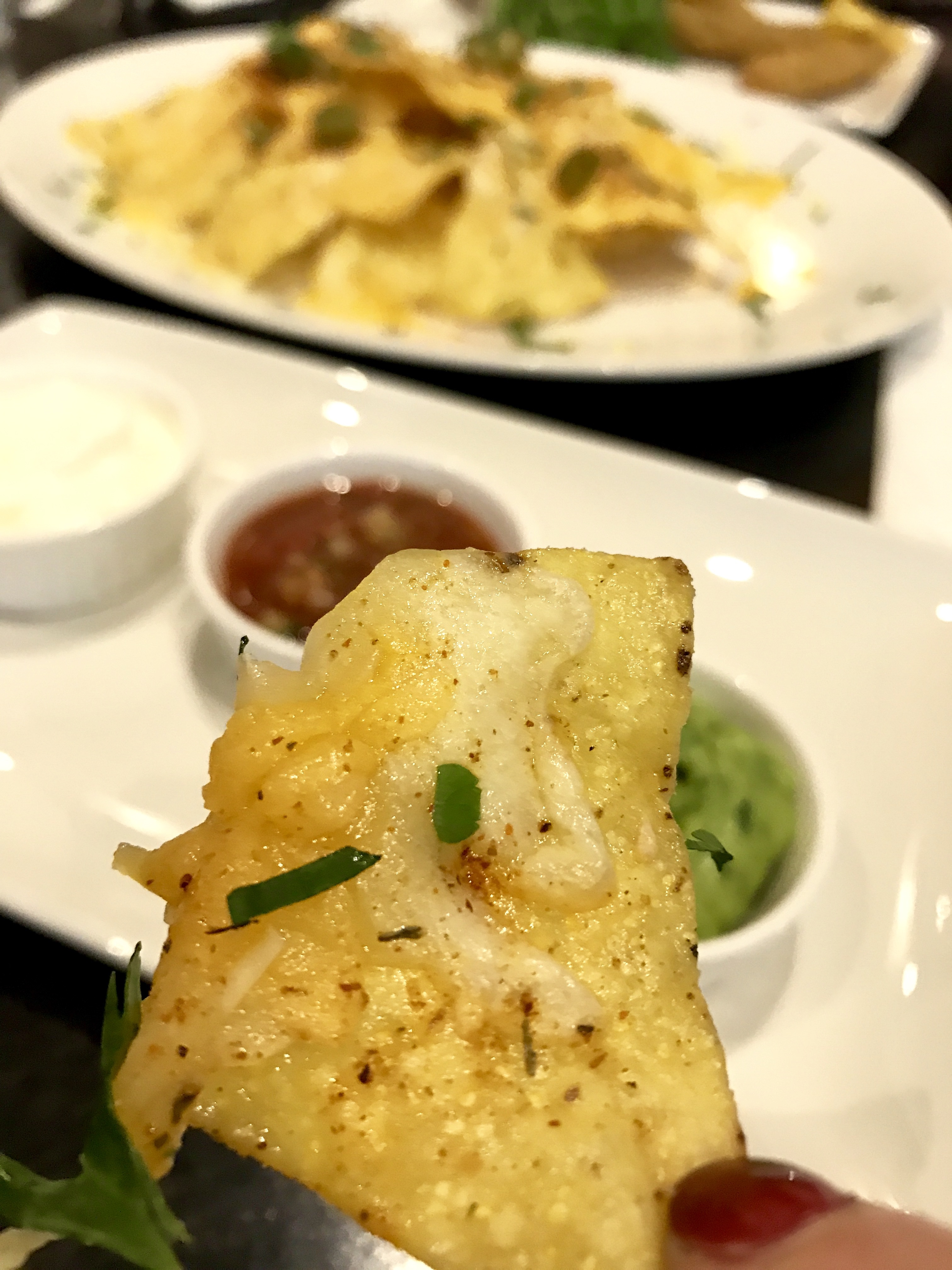 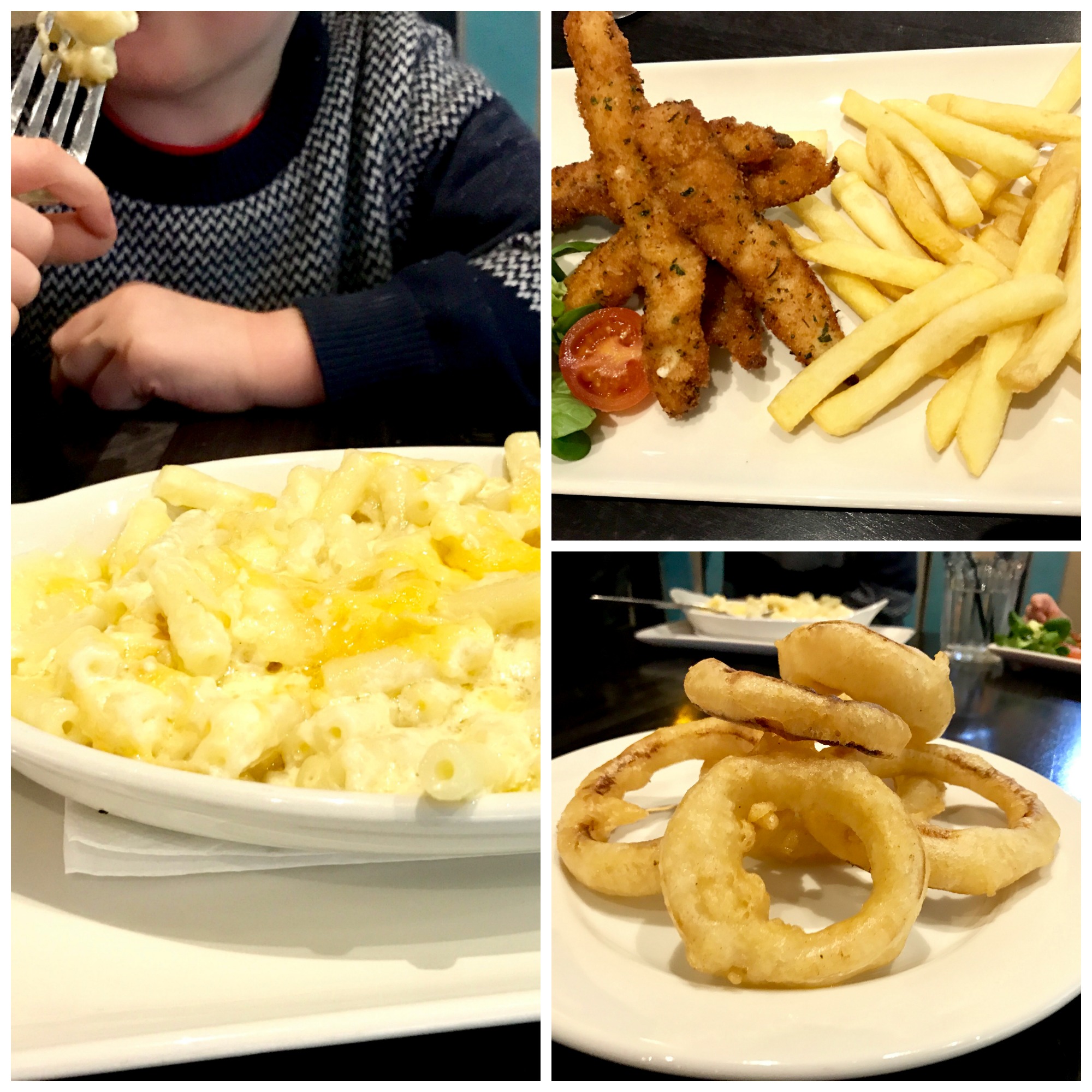 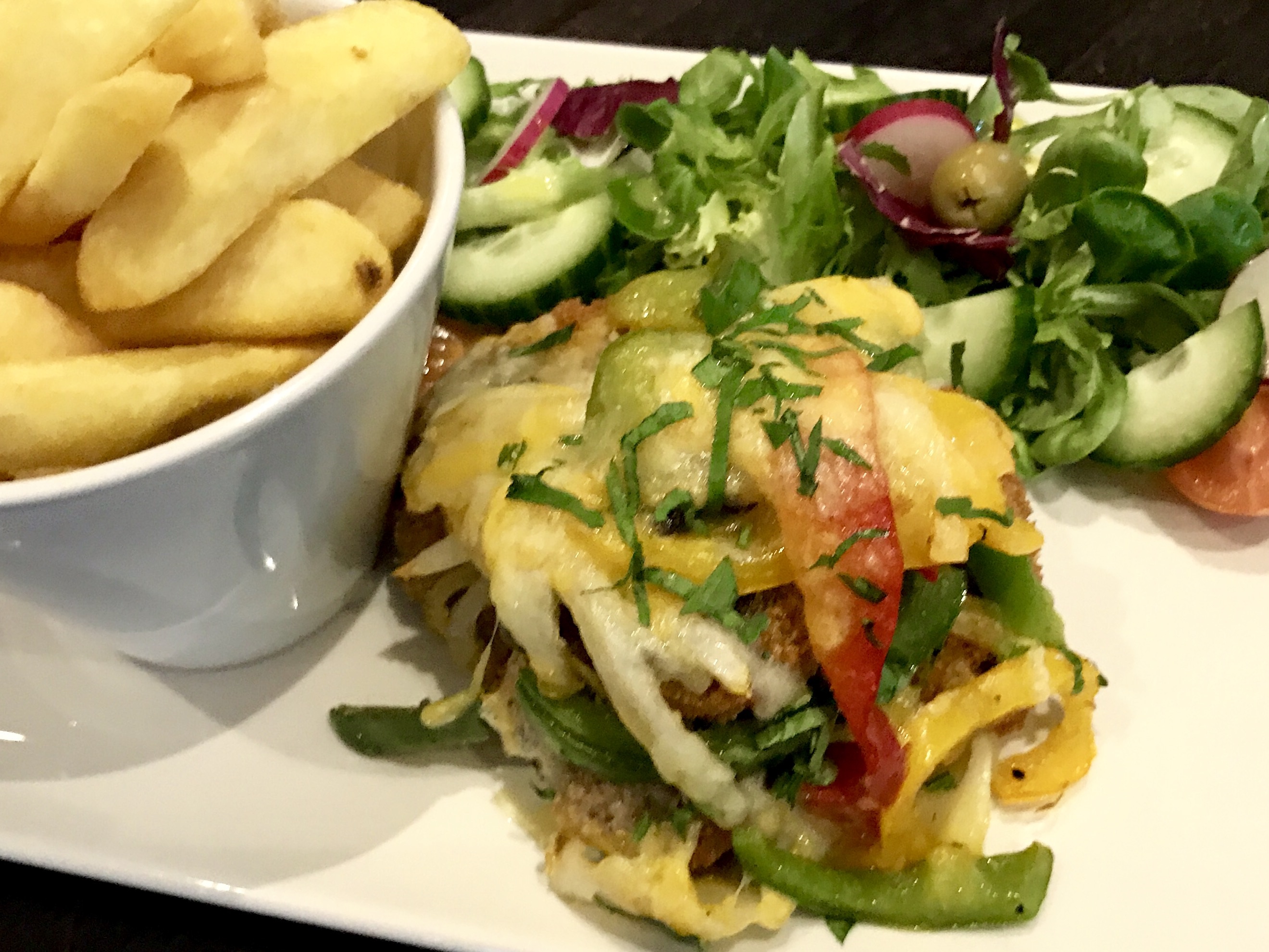 As a vegetarian, I’m never quite sure how I’ll get on at this kind of place, but there was choice of a Mexican spiced bean wrap, a spicy Mexican veggie burger and a Memphis mushroom burger and a veggie sharing platter. I opted for the mushroom burger, without the bun, accompanied with chips. The crispy battered chunks of mushroom came topped with a generous portion of roasted vegetables and accompanied by chips and a big colourful salad.

Cardiff Daddy had a Boston Blue burger, which is an 8oz beef burger served with bacon and blue cheese. He said it was lovely and juicy, and full of flavour, again accompanied by chips. 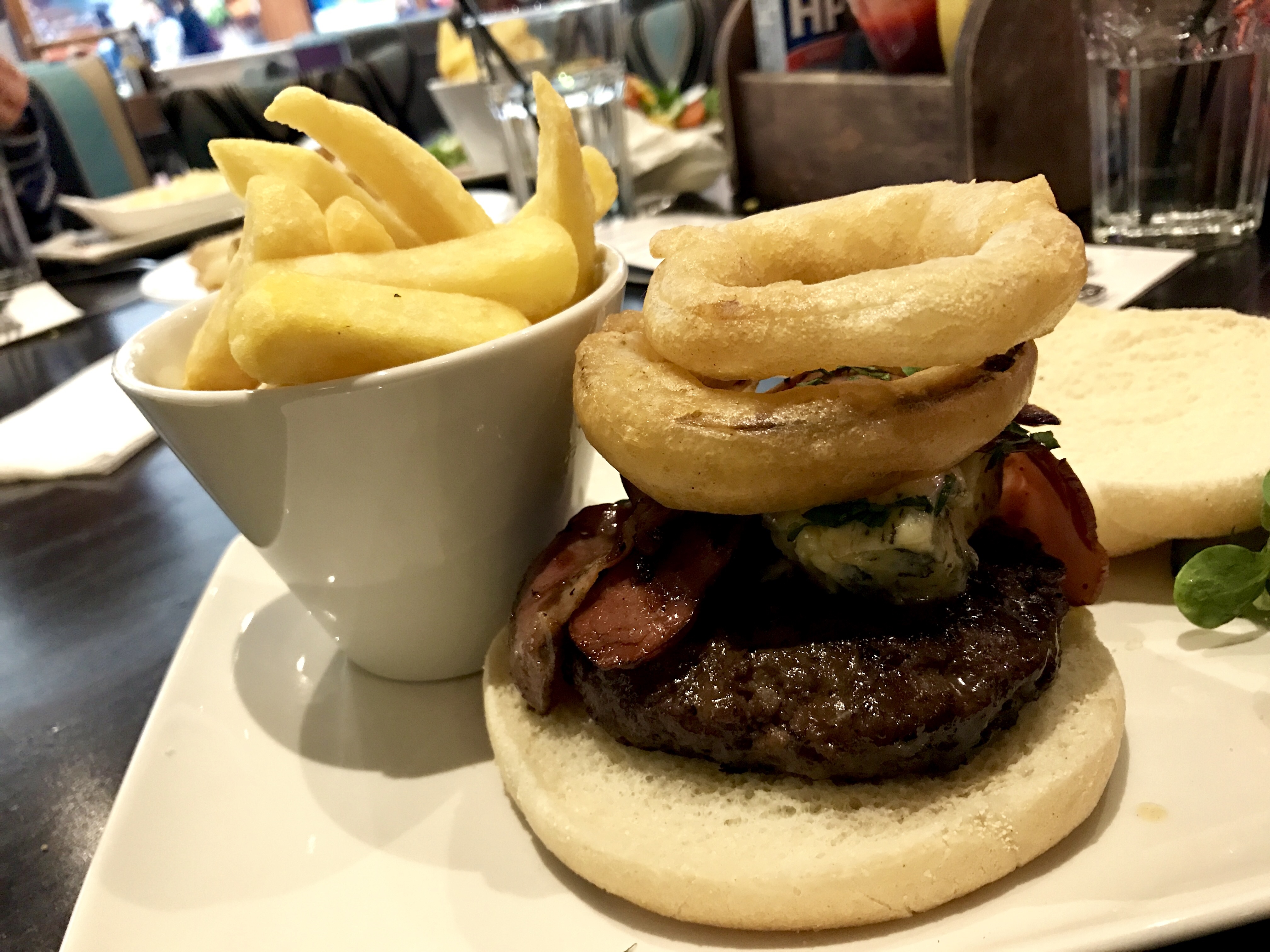 We ordered a portion of onion rings to share – although the meals were so filling, we probably didn’t need to bother. The onion rings were huge compared to what you usually get, and tasted really fresh and not at all greasy.

The food was reasonably priced, with mains around £8-£12 and children’s meals £4.95. However, if you’re dining on a Sunday, you can get one free child’s meal with each paying adult, making for really good value. Next Sunday, they’ve got a choice of set menus for Mother’s Day, including a free shake for mums.

Despite the restaurant being busy, it was a really relaxed dining experience – which isn’t always easy when you have children. There’s plenty of space between the tables for a start, which means you don’t feel like you are disturbing other diners. On the back of the children’s menus was an activity sheet, which was a bit advance for Toddler, but my other two children enjoyed doing the word search and maze puzzle.

Once we were done with our mains, it was time for dessert, in the form of Grill & Shake’s famous shakes. There’s a choice of chocolate bar shakes (£3.75 for regular, £4.75 for large), which combine favourite chocolate brands, such as Oreo, Bounty, Crunchie, Ferrero Rocher, Maltesers and loads more, with milk and cream for a thick and creamy treat. Or you can opt for the more indulgent Shake Specials (£4.95/£5.95), which combine two different chocolate varieties, with ice cream and topped with cream and various decorations 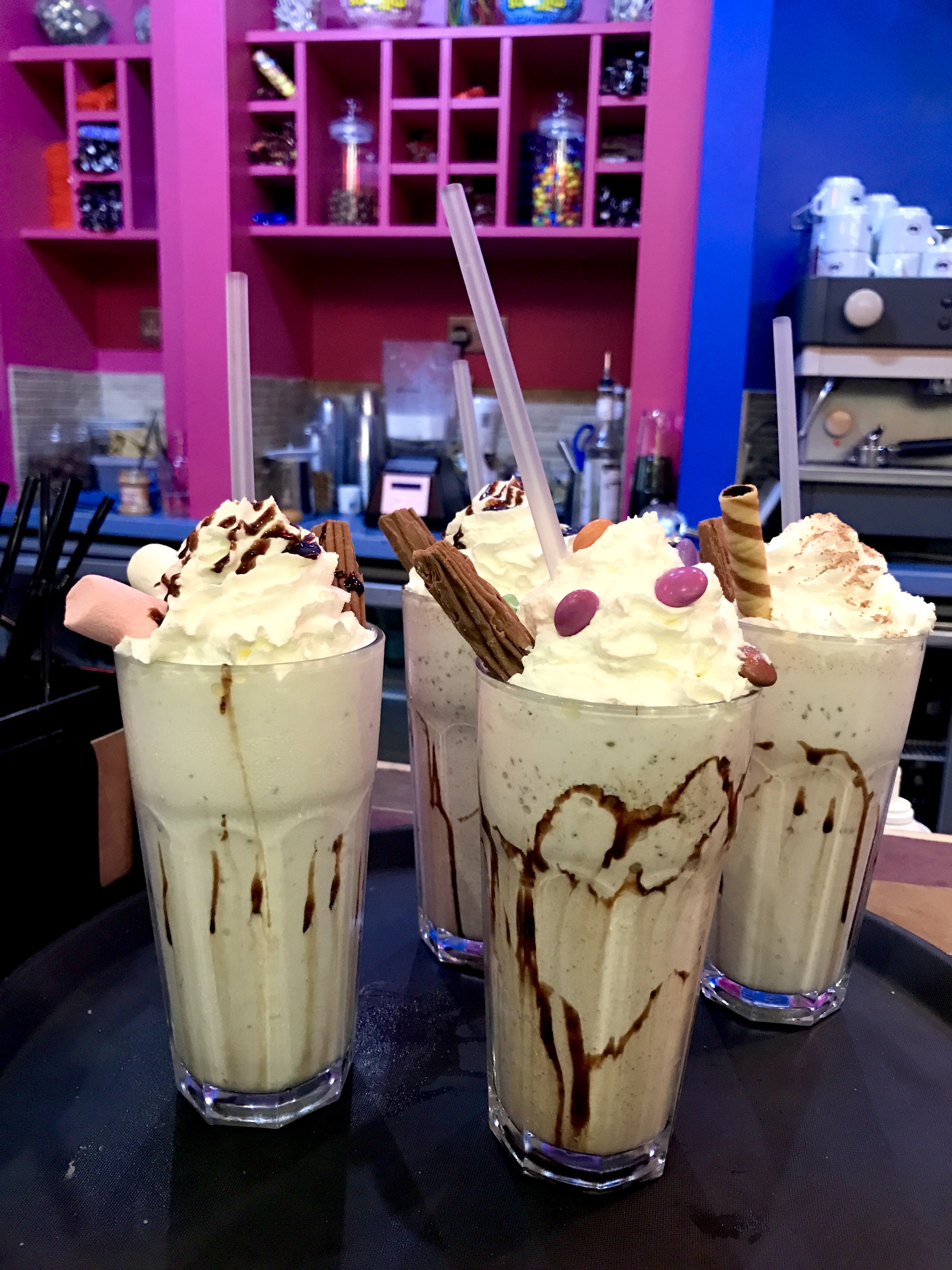 The ones we’d seen other diners enjoying looked so amazing, I even broke my healthy eating to indulge. I opted for Shake Special (Oreo cookies and Ferrero Rocher, topped with whipped cream and chocolate sauce); Cardiff Daddy had a Posh Nut (Ferrero Rocher, peanut butter); Miss E had The Minty (Mint Aero-based); Little Man had a Cookies and Smarties, all from the Shake Specials menu, while Toddler had a Kinder Bueno chocolate bar shake.

They were very filling, very indulgent, and although the kids struggled to finish them, they thought it was such an amazing treat.

Because that’s the thing about Mother’s Day – it’s supposed to be about spoiling the mums, but we all know that when the kids are little, it ends up being more about doing a family activity. I’m happy with that though. During the film, one or other of the kids was sat on my lap cuddling at all times, and then the atmosphere in Grill & Shake was so chilled out, it didn’t feel at all stressful, as family meals sometimes can. If the weather had been better, we had planned to head for a walk around Cardiff Bay or a scoot across the Barrage, but the rain meant we gave up on that idea. Our Mother’s Day celebration may have been a week early, but we had such a lovely family day out, spending quality time together.

There will also be a pop-up gift showcase over the weekend.