Paid collaboration with The Red Dragon Centre as part of our role as family blogger ambassadors. Thanks to Bella Italia for providing us with our meals.

Bella Italia at The Red Dragon Centre had a big refurbishment over the summer – and my children and I finally got to check it out yesterday with a half term/Halloween family meal at the Cardiff Bay restaurant.

The new look Bella Italia is much brighter and airy than previously. Elements of the traditional Italian kitchen décor remain such as a huge dresser filled with bottles of olive oil. But some partition walls have been removed, there are striking photos of Italian landscapes on the wall and the whole place now feels much more open and lighter.

We visited yesterday lunchtime after seeing Smallfoot at the Odeon (not a review; we paid for our tickets ourselves and as adults pay kids prices for family films it cost £20 for me and three children which also entitled us to free parking at The Red Dragon Centre for up to six hours). 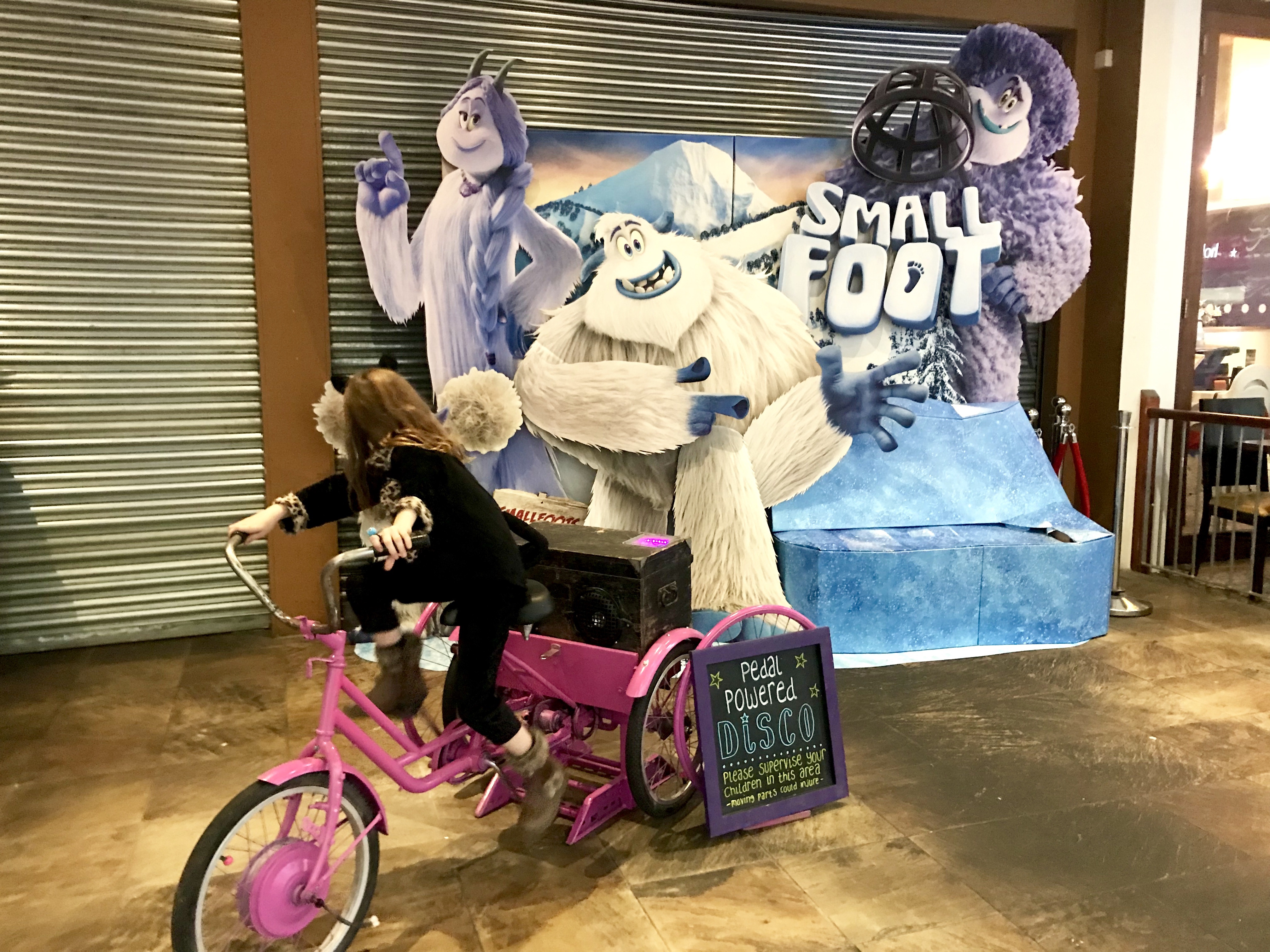 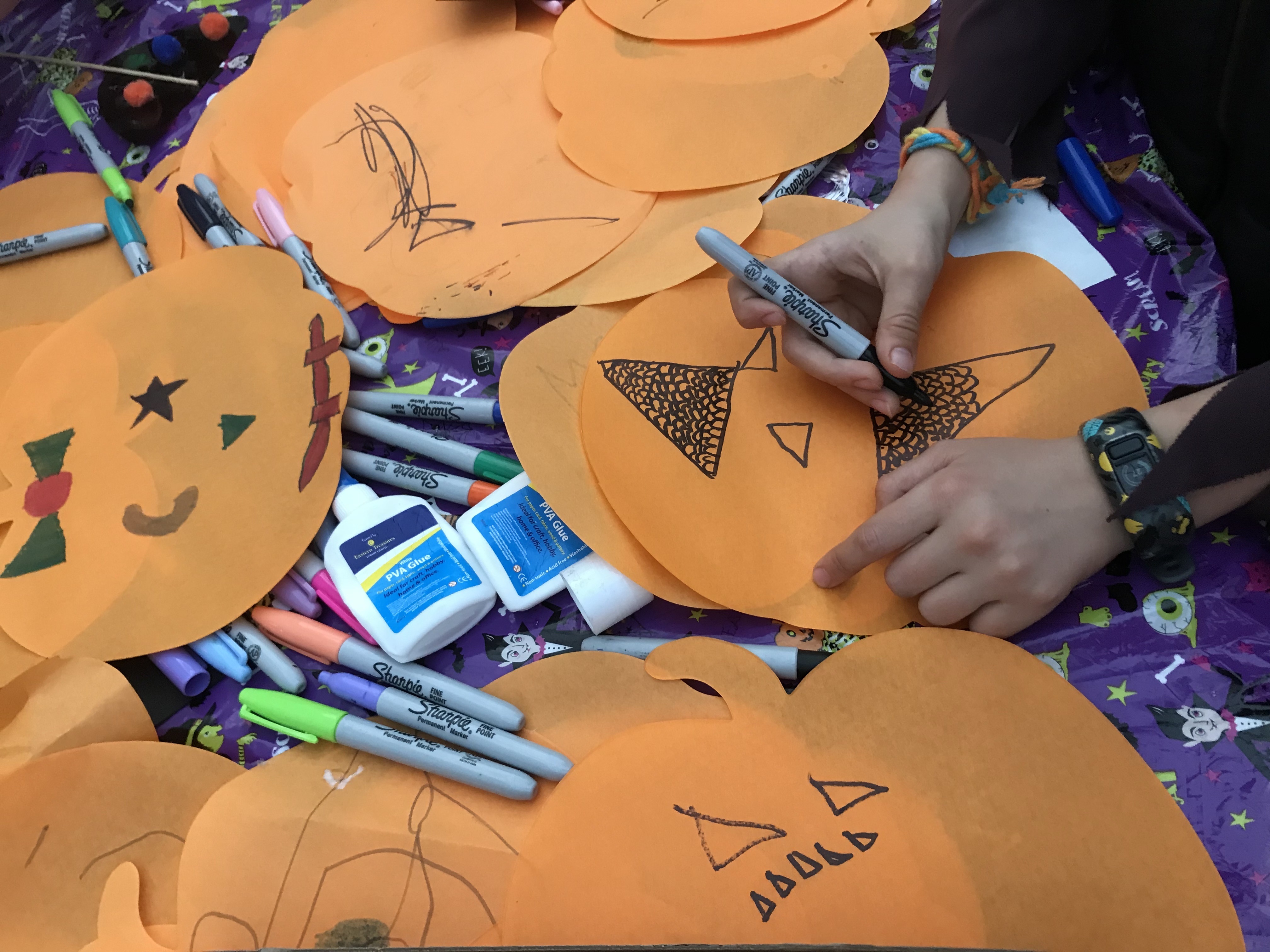 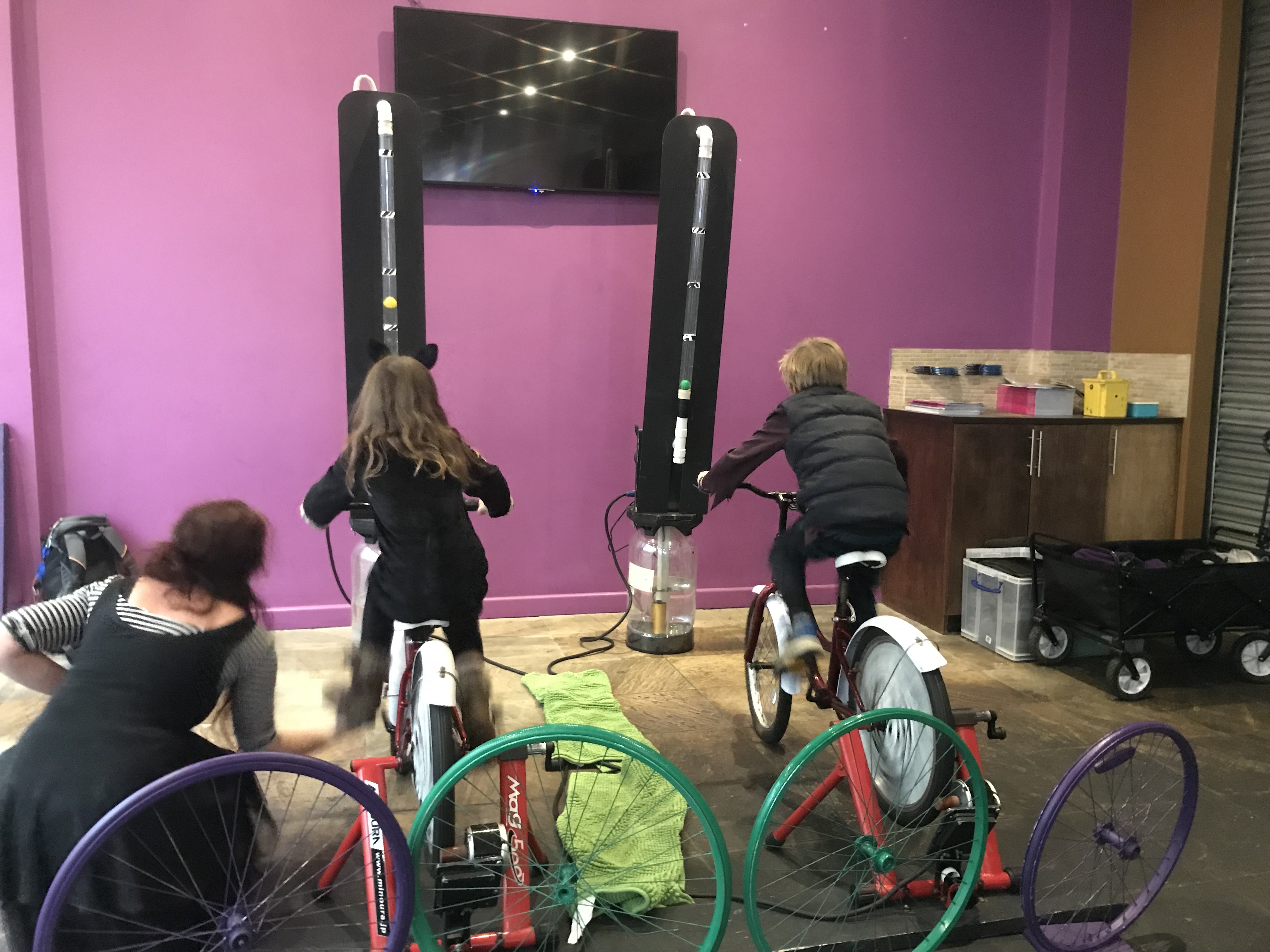 After our food we also took part in a free Halloween-themed RDC Eco Kids event. This included craft workshops from Eggseeds Cardiff where we made bat masks, paper pumpkins and spider webs. All the materials we used was donated to ReCreate Cardiff from local businesses and would otherwise have been discarded. We then took part in some pedal-power activities with Pedal Emporium where riding bikes helped generate enough energy to pump up an inflatable ghost; to power the tunes on a disco bike; and to race bats. Keep an eye on The Red Dragon Centre website for details of forthcoming RDC Eco Kids events. 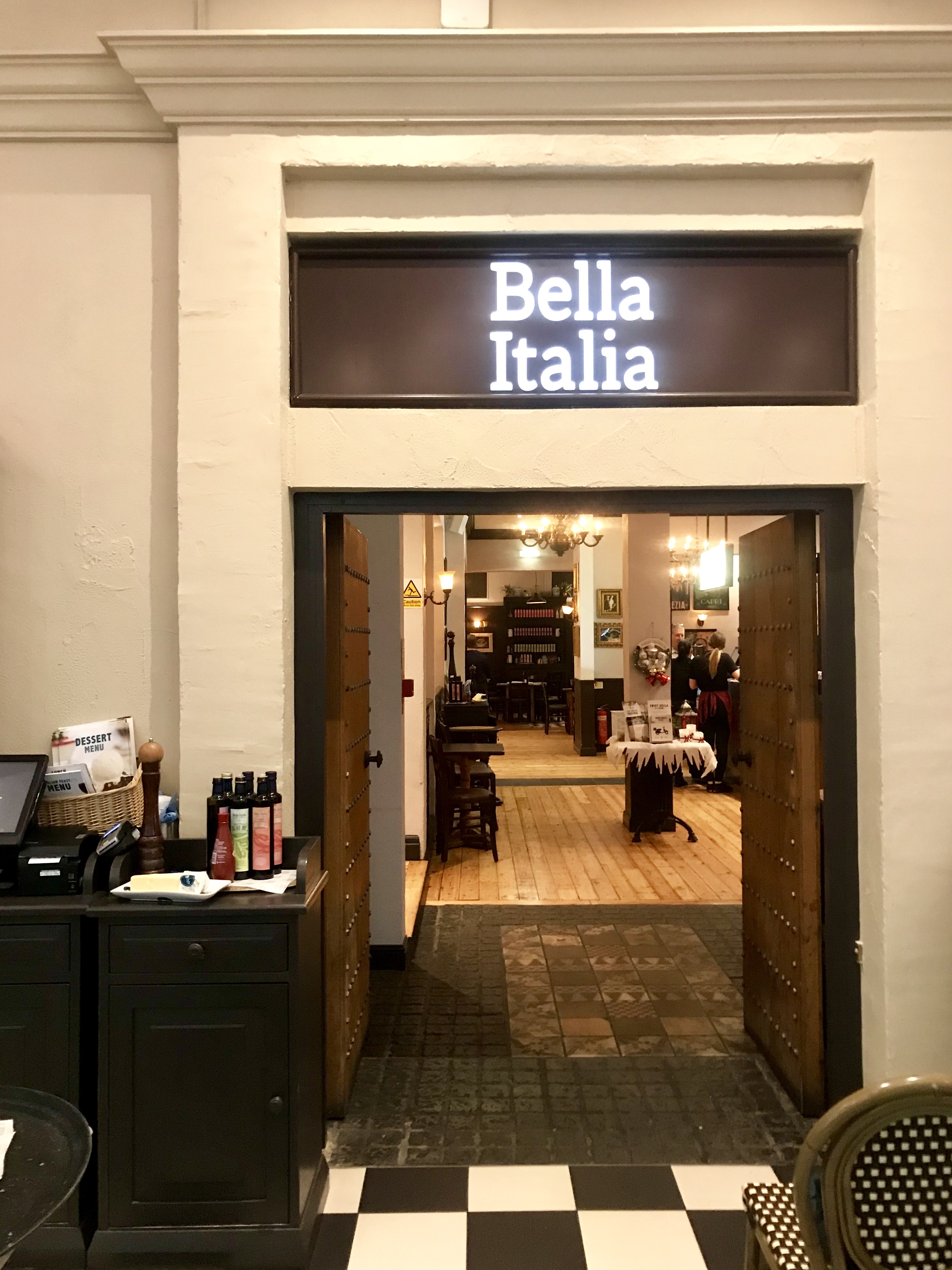 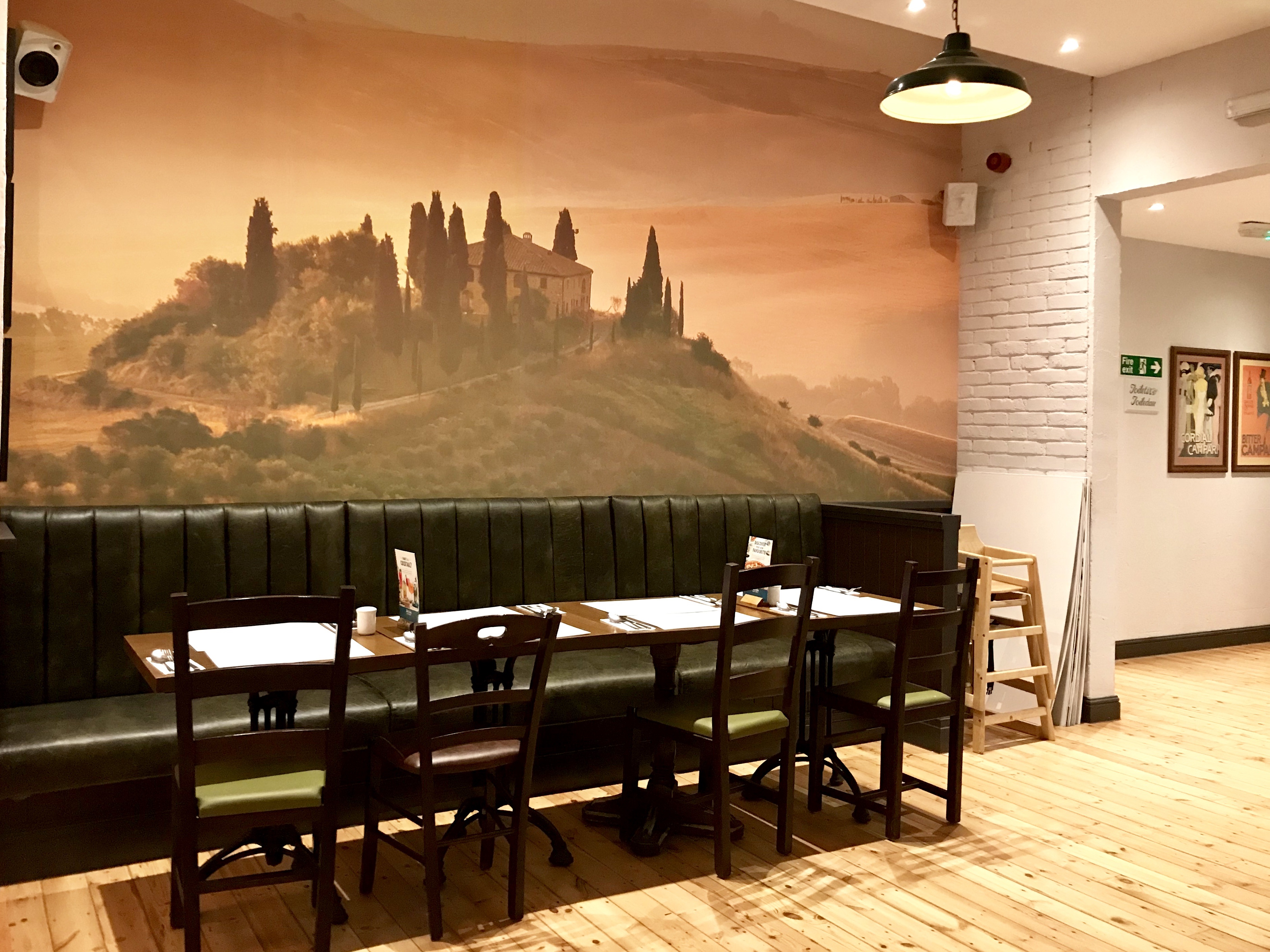 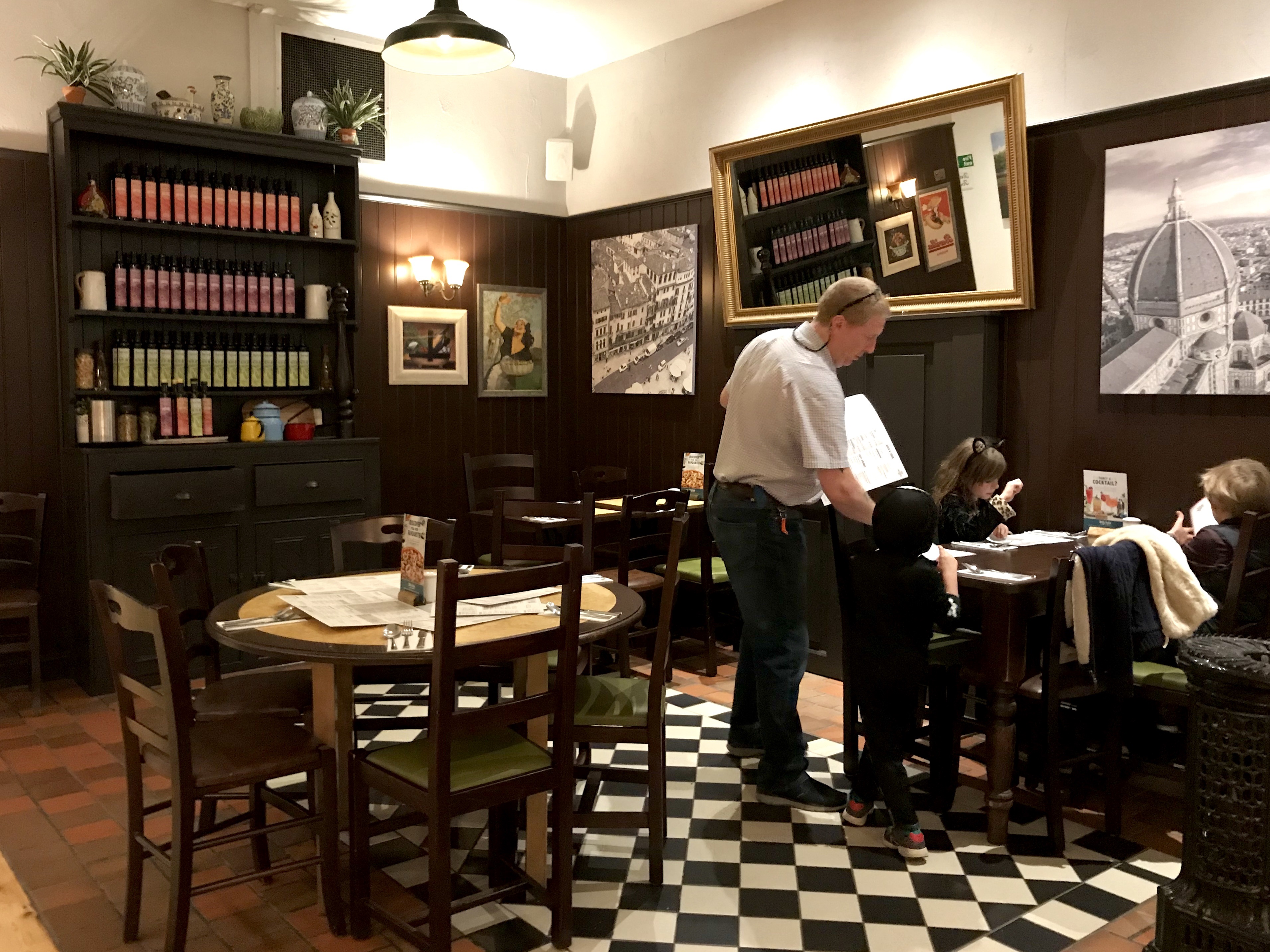 Back to the food though and my children loved their kids menu which doubles as an activity pack of colouring and games. Children age 2 to 6 can choose from the Piccolo menu which costs £5.95 while 7-11 year olds have the grande menu at £7.95. Both include starter, main, dessert and unlimited Robinsons squash served in little glass bottles with reusable plastic straws.

For those with babies and toddlers, high chairs are available plus there’s Ella’s Kitchen stage 1 and 2 food available at £1.50 per jar.

After their starters of cheesy garlic bread (my eldest and youngest) and vegetable and bread sticks (my middle child) it was time for mains. My eight-year-old daughter and seven-year-old son opted for pizza while my four-year-old son had animal-shaped pasta bolognaise. The portions were well-sized and we took a few slices of pizza home with us in a box – although I think my hungry four year old would have been better ordering from the grande menu rather than piccolo. 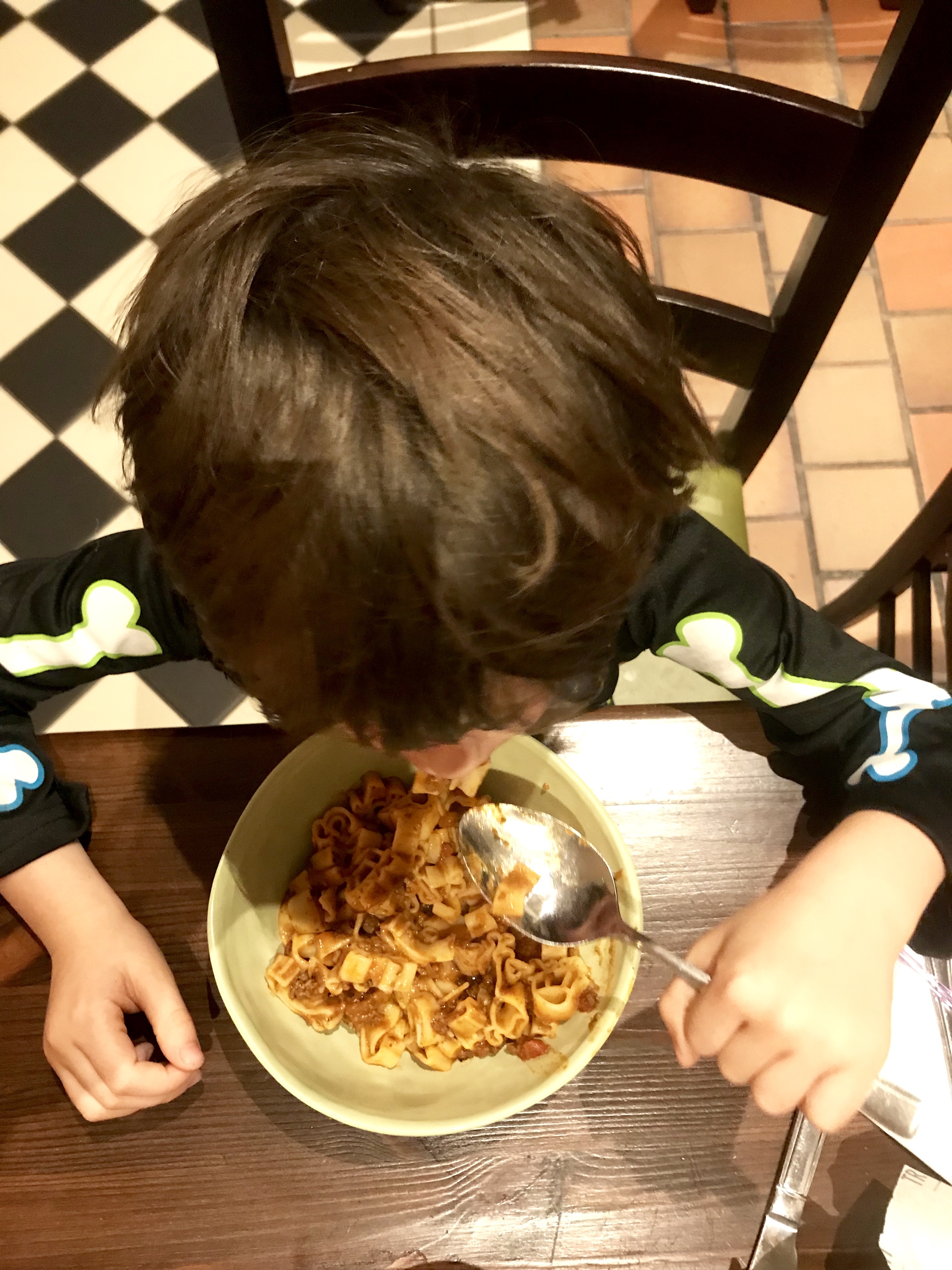 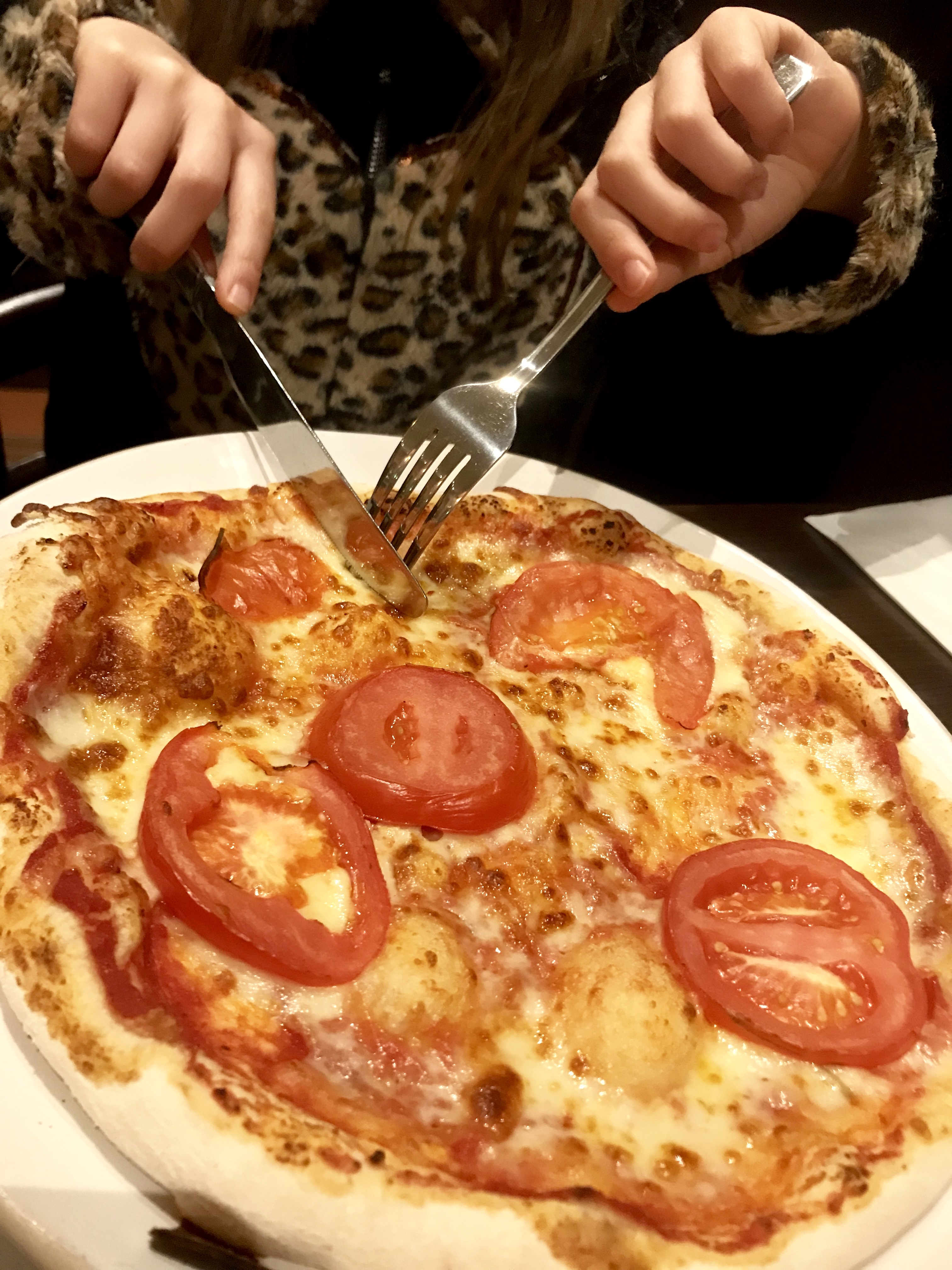 I eat a vegan diet though so was pleased to see they have a separate vegan menu (as well as a gluten free one) with a great choice of food. I chose bruschetta topped with tomato (£5.59) for starters although I realised afterwards that I’d completely missed the vegan version of their new Polpette meatballs (£6.29) so next time I think I’ll go for that. 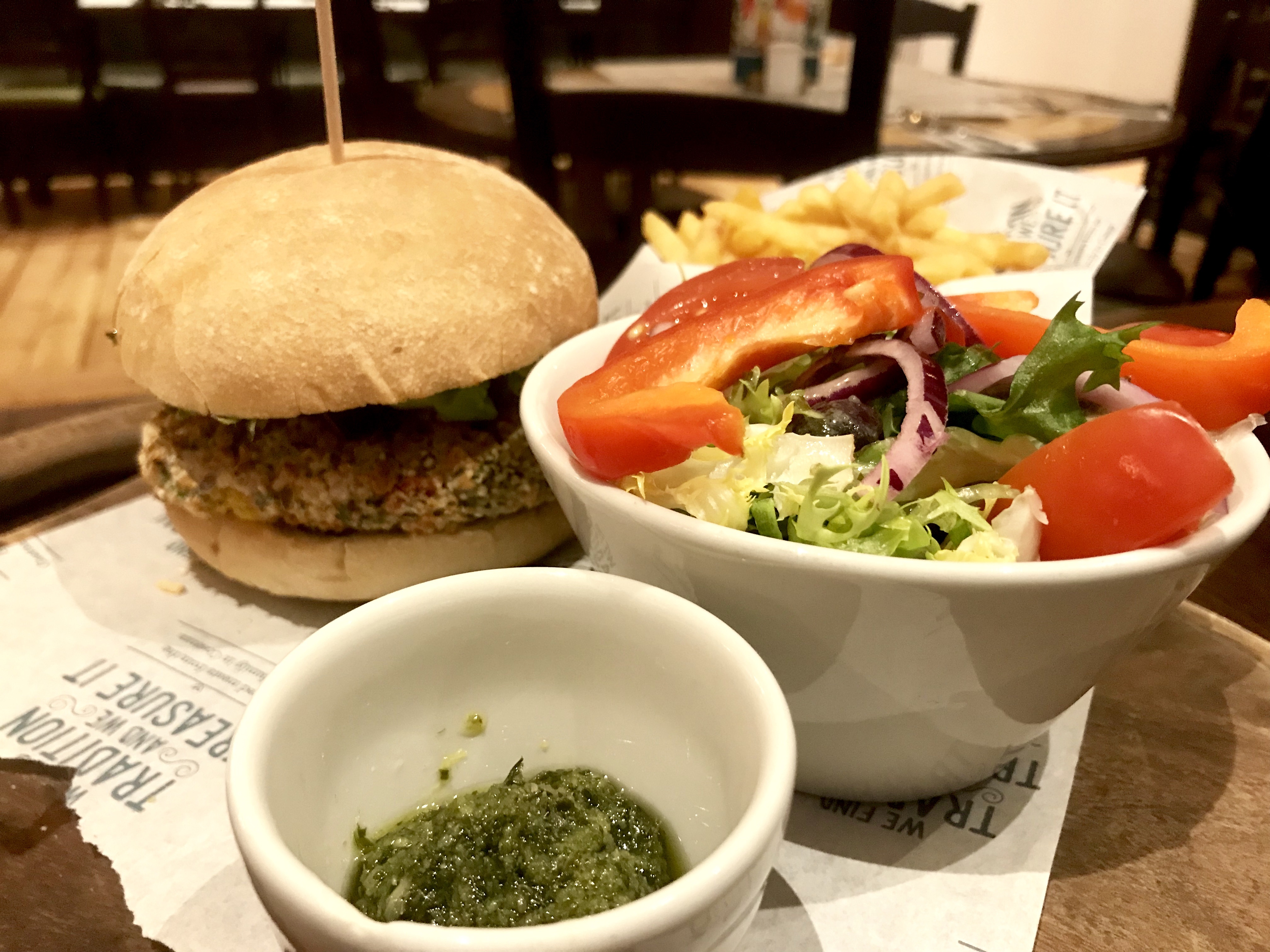 I’d hoped to have the mushroom risotto for main but unluckily for me they’d just sold out so I had the vegan verde burger (£9.99) instead. Made from cannellini beans, garlic and Mediterranean veg this came served in a warm bun and accompanied by salad and delicious salsa verde made from one of Bella Italia’s Italian suppliers, the Contino family. I also ordered a side of fries (£3.79) although the burger and salad would have been quite filling on its own. For those looking for lighter dishes you can swap the pasta in any meal for spiralised veg or one of their generous salads. 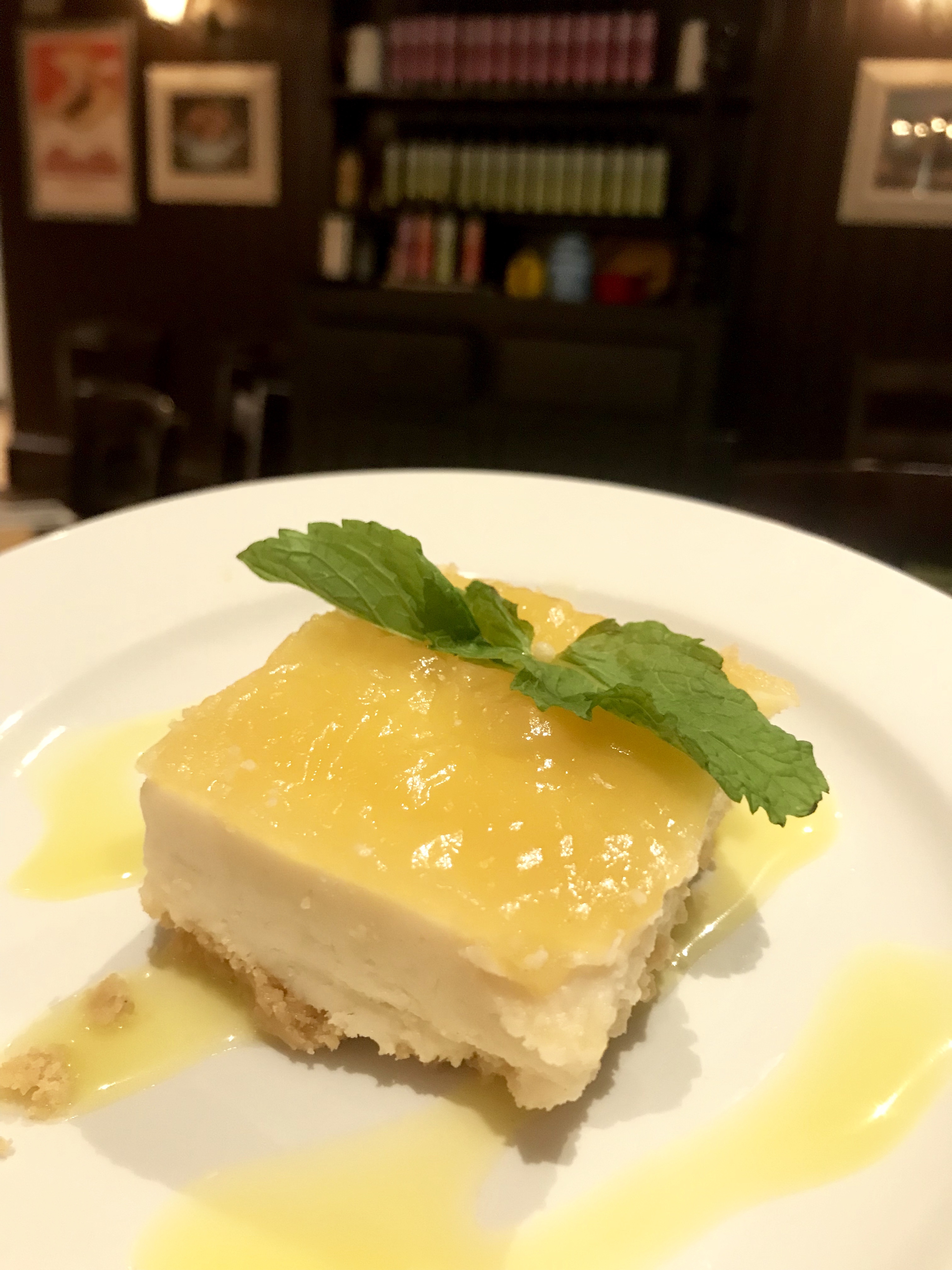 For dessert, our waitress recommended the vegan Sicilian lemon ‘cheesecake’ to me. She told me that this appears on the main menu and is one of the restaurant’s most popular desserts. I can see why. It was fresh, zingy and light… and demolished very quickly. 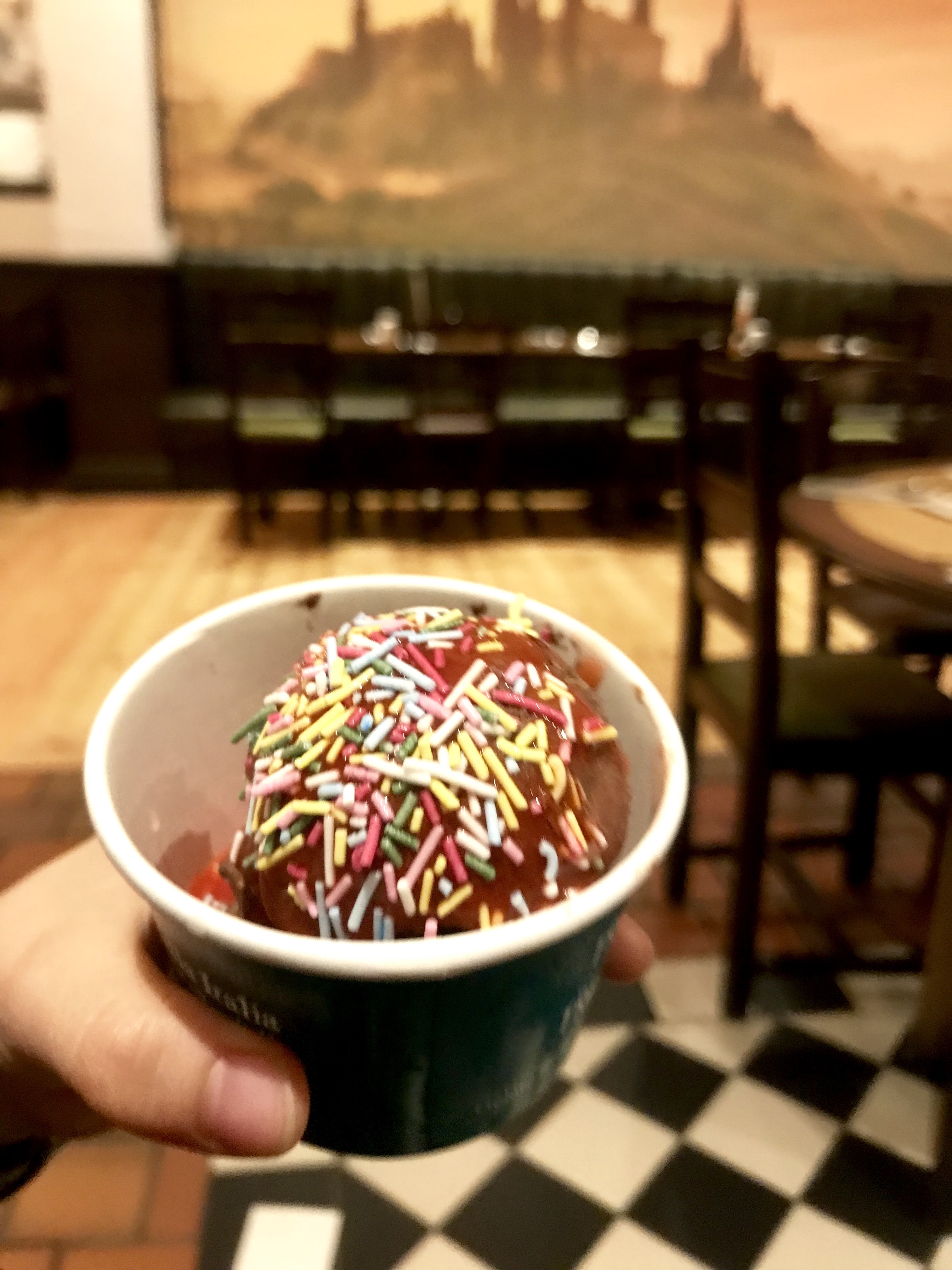 Littlest had an apple and mango ice lolly while my two eldest children opted for a pot of ice cream with a choice of sprinkles and sauce.

Bella Italia are currently running a great offer where children can dine for £1 when purchasing an adult main course (one child per main; to a maximum of three per table). The offer runs until Sunday 4 November. To take advantage of it head to the Bella Italia website and fill in your details.