For someone who loves musicals so much and has been reviewing theatre for close to 20 years, I’m embarrassed to tell you that last night was the first time I’d seen Wicked.

The stage musical – which last week celebrated its 15th birthday – premiered on Broadway on 30 October 2003. It opened in London on 27 September 2006 and is the fifth longest-running musical currently playing in the West End. It’s been seen by almost 60 million people worldwide and has won more than 100 major international awards including three Tony Awards® on Broadway and two Olivier Audience Awards in the UK. It’s also been voted Best West End Show by theatregoers on three separate occasions at the annual WhatsOnStage Awards.

The show is kind of a big deal.

And yes – despite knowing all the songs and the plot I’m embarrassed to say I’d never seen it.

In fairness the last time it was in Cardiff was March 2014. It opened the week I became a mum for the third time. As much as it pained me to miss out I knew there was no way I’d be able to go.

Four and a half years later and the show is back in Cardiff’s Wales Millennium Centre and I finally got to see it at last night’s press performance.

There was a lot of expectation riding on this show for me – I so wanted to love it. But what if I didn’t? After last night’s show I’m pleased to report it was every bit as wonderful as I’d hoped.

It’s not a prequel – the action takes place before, during and after the events of The Wizard of Oz. In Maguire’s words it’s “a re-imagining of the same world” and a “parallel universe” to Baum’s magical world. Indeed, the way the show makes you reconsider what you thought you knew about The Wizard of Oz is incredibly clever. We find out why the Wicked Witch – Elphaba – is born green. We learn about the ups and downs of her friendship with Glinda the Good. We see how the lion, tin man and scarecrow came to be. We discover more about the origins of the tornado that ripped Dorothy Gale’s house from Kansas to Oz, why it landed on Elphaba’s sister the Wicked Witch of the East and just why she’s so desperate to get those sparkling shoes back. We see that the Wizard isn’t so wonderful after all. We soon find ourselves asking whether the Wicked Witch of the West was really as wicked as we had been lead to believe or whether she was the innocent victim of a corrupt regime in the Emerald City.

It’s clear that Wales Millennium Centre is embracing its three-and-a-half week long run of the show and with more than 50,000 tickets already snapped up and several performances sold out barring the odd lone ticket it’s clear the people of South Wales are delighted to have it back here too. 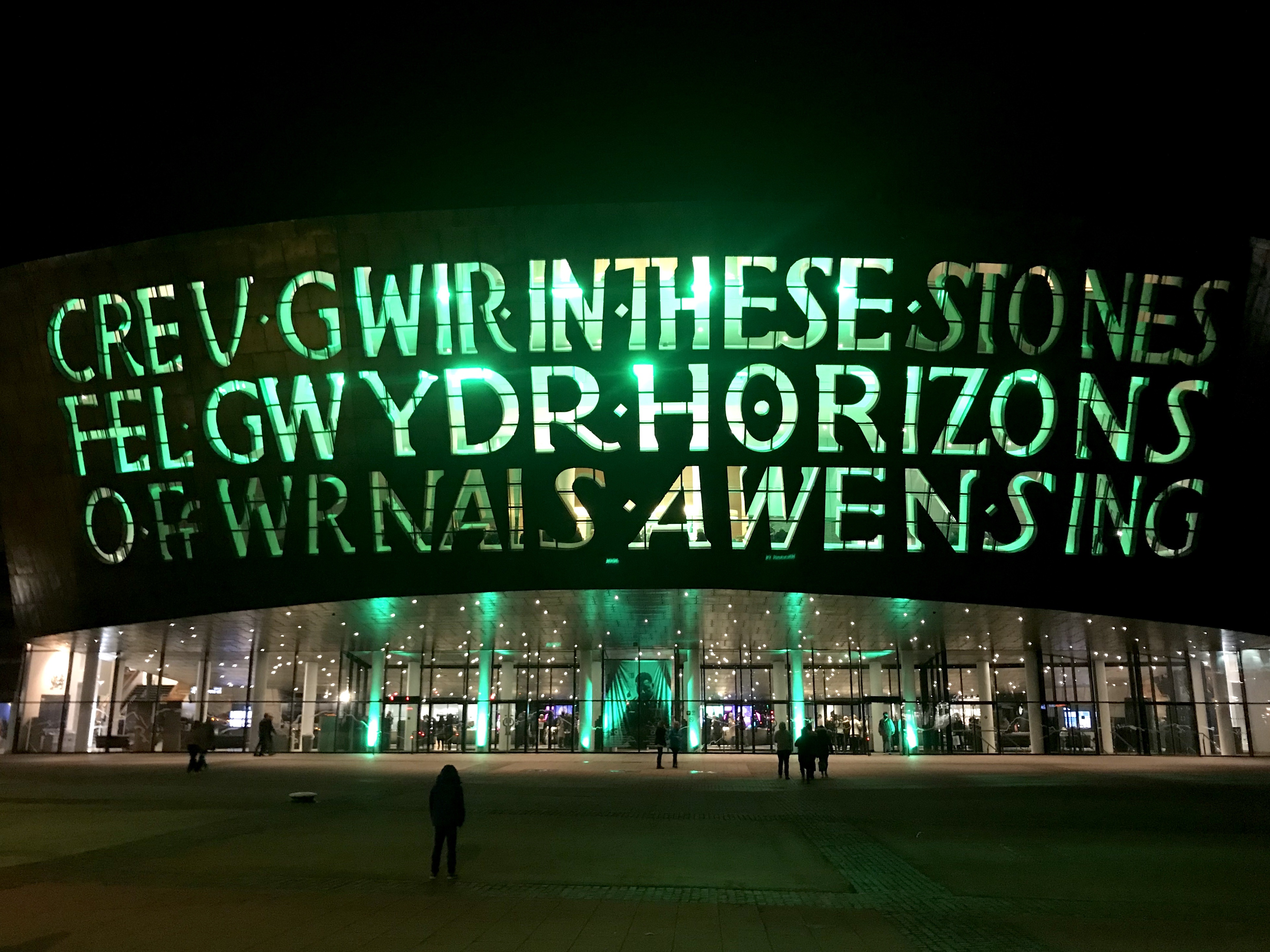 As we arrived last night, we were greeted by Wales Millennium Centre’s famous letters illuminated in green. Such a wonderful sight! All the press office staff welcoming the invited guests were dressed in green and we were served glasses of green bubbly and chocolate cakes topped with green.

To say I was excited when my seven-year-old son and I took to our seats was an understatement.

I loved everything about the show. The set – designed by Eugene Lee – featuring giant inner workings of a clock and a dragon’s head which moved throughout the show was so striking and Glinda descending onto the stage in a cog in the most lavish blue dress was a beautiful jaw-dropping moment. How I would love to wear a dress like that! The way Elphaba rose up from the stage, her black gown descending all around her at the end of act one, was also really impressive. 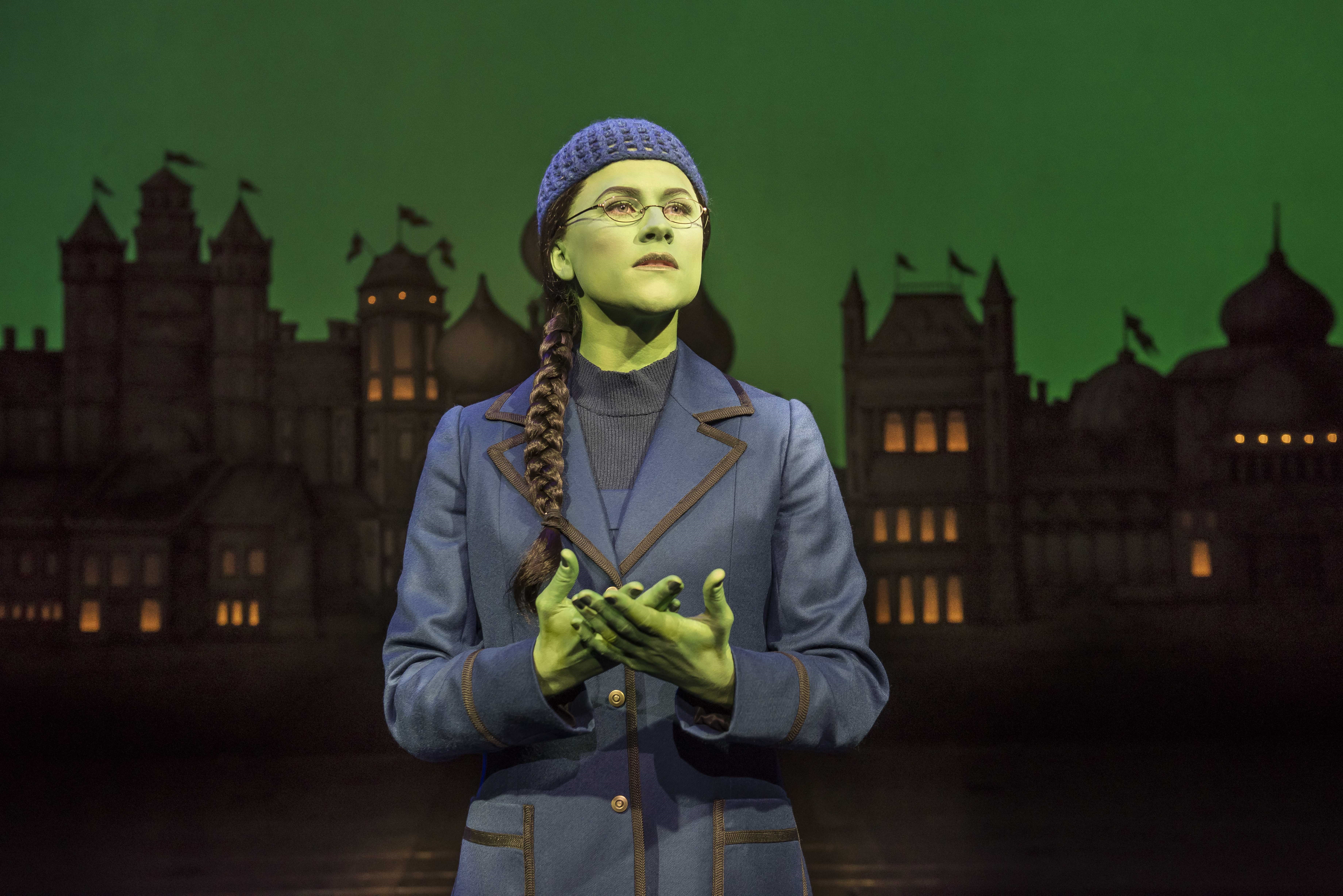 Kenneth Posner’s lighting brought so much atmosphere to the show. The stage was engulfed in green and red at various points and there were some great effects depicting the rain and tornado too.

There’s a cast of 30 on stage with fantastic supporting performances from Aaron Sidwell as Fiyero, Steven Pinder (who I remember as Max Farnham in Brookside) as The Wizard and Doctor Dillamond, Kim Ismay as Madame Morrible, Emily Shaw as Nessarose and Iddon Jones as Boq.

But this is Elphaba and Glinda’s show.

The part of Elphaba was originally played on Broadway and in the West End by Idina Menzel. She won the 2004 Tony Award for Best Actress in a Musical – and then went on to achieve global fame as the voice of Elsa in Disney’s Frozen, singing the Oscar and Grammy Award-winning song Let It Go. It must be a tough role to step into – but Amy Ross (in the role last night) is utterly incredible. Her voice is delightful – crisp and sweet and showcasing all kinds of emotions as we learn more about Elphaba’s early years of being unloved by her own father, teased by all who meet her due to the colour of her skin, but determined to help those in need and expose wrongdoings no matter what the personal cost. 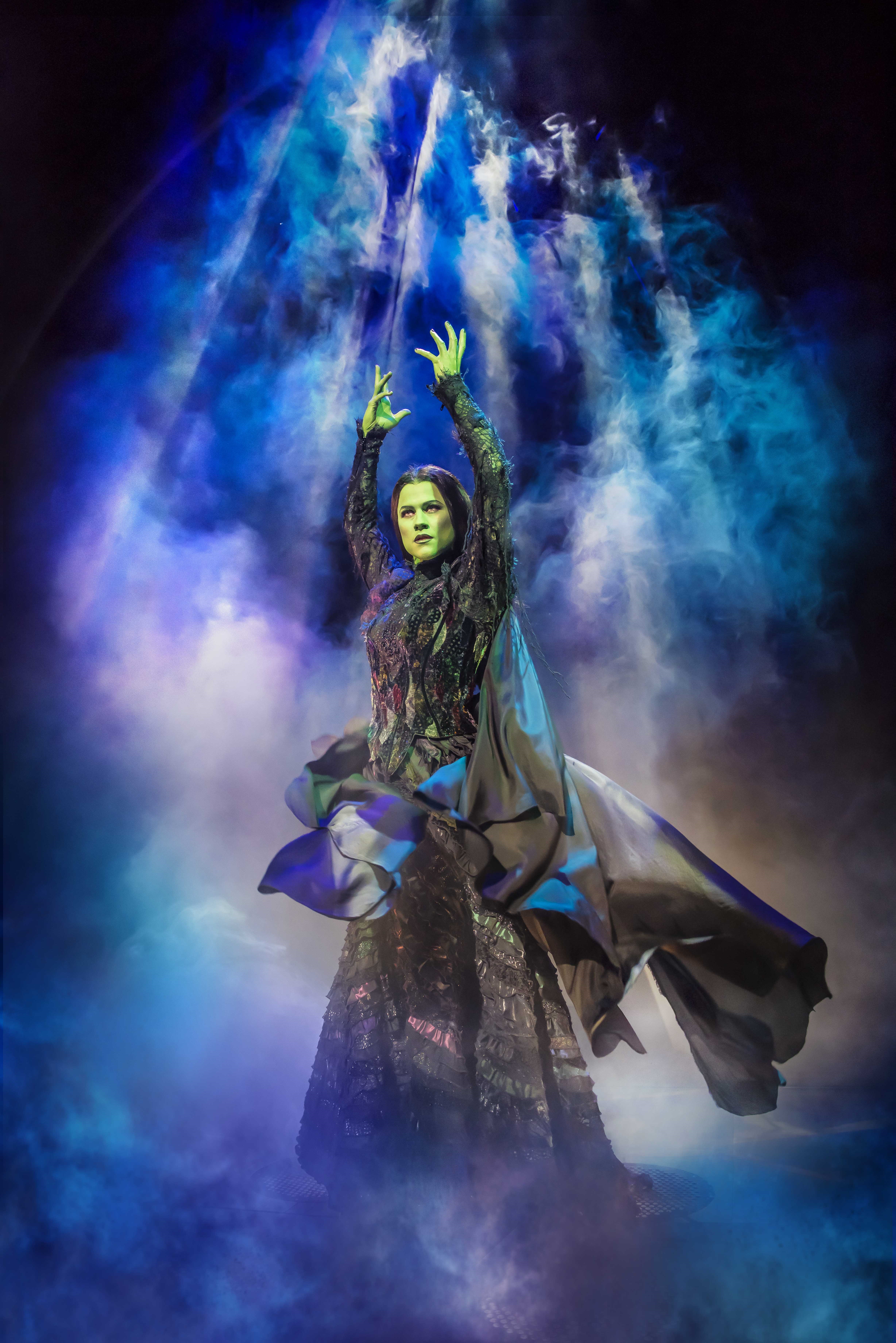 Charli Baptie played Glinda at last night’s performance. She’s actually understudy to Helen Woolf who will be playing the Good Witch here in Cardiff and who is pictured in the photo below. But there was nothing second best about Charli – she too is a brilliantly accomplished performer. I loved the character of Glinda – so used to having everything her own way and everyone falling all over her to please her she finds herself inadvertently supporting the Wizard of Oz’s corruption because she loves being in power and having people looking up to her. 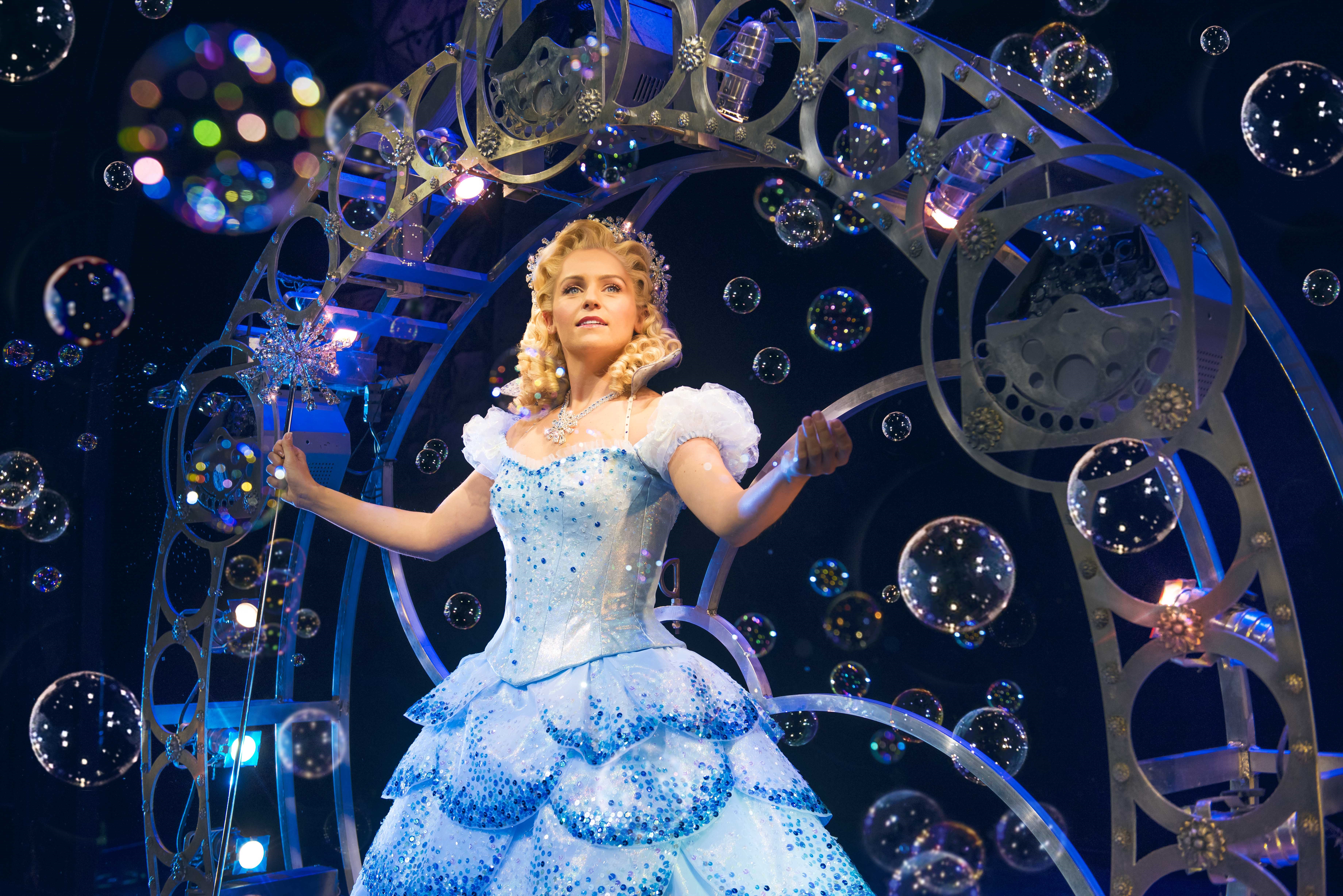 The pair’s rendition of the show’s most famous musical number Defying Gravity gave me goosebumps. And I had a real tear in my eye listening to For Good near the end of the show in which the two muse over how each has influenced the other’s life and actions. “I know I’m who I am today because I knew you.” 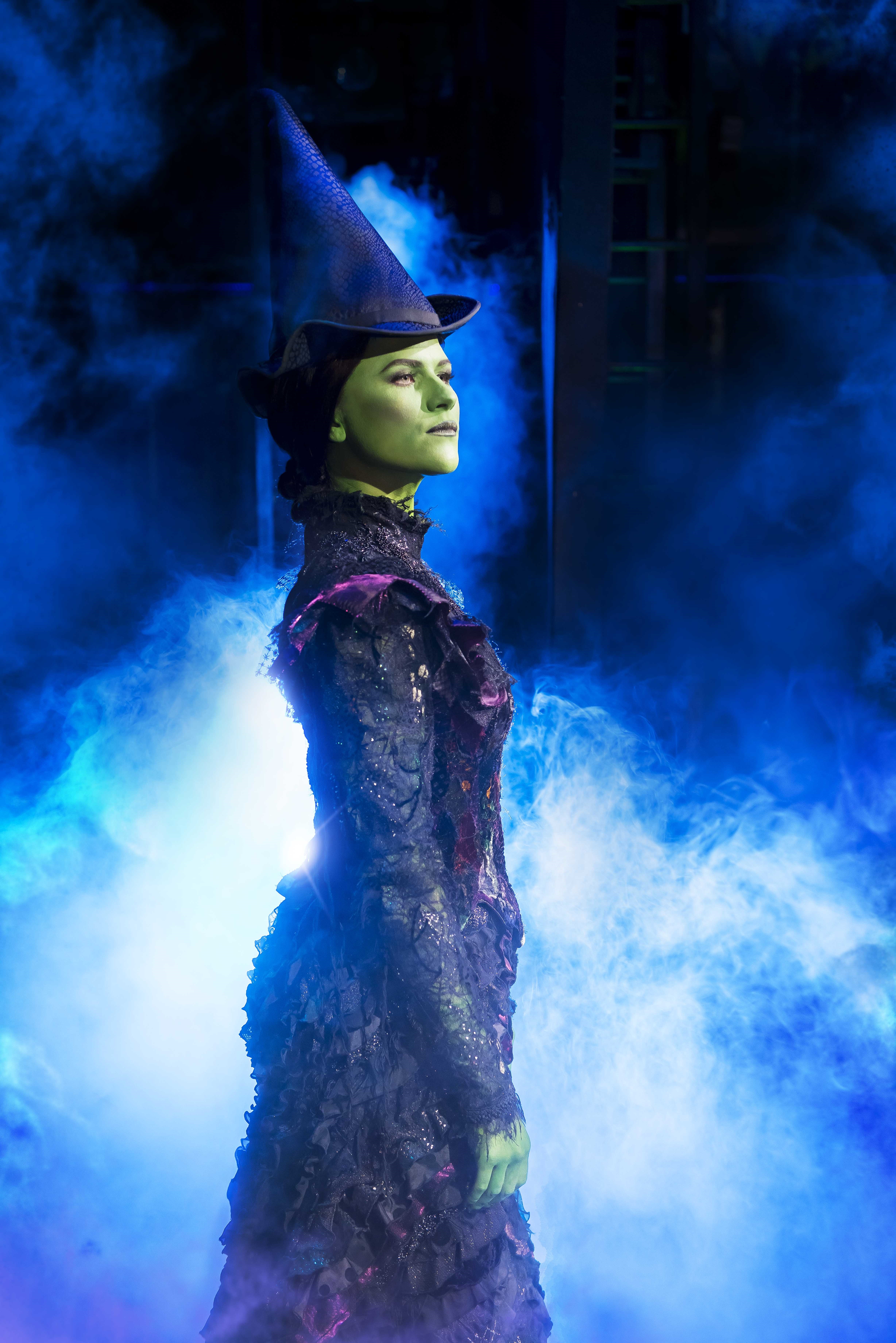 Incidentally I think having a knowledge of the music and the plot really helped my enjoyment of the show. A friend who was also there last night told me the songs didn’t jump out at her and she wasn’t enjoying it as much as she’d thought partly because she didn’t know the music. For me, seeing the songs I’ve been listening to for years being performed live on stage was magical.

My seven-year-old loved it too. Seven is the minimum age guidance with no admittance to under twos. It wasn’t especially scary other than the booming voice and demonic eyes of the machine used by the Wizard of Oz to scare the subjects of the Emerald City but the detailed plot could be harder for younger children to follow.

I saw a comment on Twitter that no one ever sees Wicked just the once. And that’s true of me. I’ve already booked to see the show again – this time taking my eight year old daughter who missed out to her brother last night.

She’s as musicals-obsessed as me so I know she’s going to love it. And I’m beyond excited to watch it again.

Wicked is at Wales Millennium Centre until Saturday 24 November. Ticket availability is very limited at evening and weekend performances with single seats only at some performances. Standing tickets are available for some shows. Best availability is weekday matinees. Visit the WMC website for more information.