Looking every bit as though it had jumped off the TV screen and straight onto the stage, my children loved Paw Patrol Live at Cardiff’s Motorpoint Arena this morning.

The live action stage show is in the Welsh capital this weekend as part of its UK tour, with three performances today and three tomorrow (there are still some tickets available if you are quick). We were lucky to be invited to review the show.

Paw Patrol Live: Race to the Rescue is a brightly-coloured, fast-paced musical action adventure bringing all the much-loved elements from the TV show to the stage, from the theme song music and the Pup Pup Boogie to Ryder and gang’s famous catch phrases. Plus there’s plenty of catchy new musical numbers which the little kids loved dancing too, and lots of audience interaction to help the youngsters feel like they are part of the story.

Three-year-old Littlest Boy I was mesmerised throughout. He’s a huge Paw Patrol fan and has lots of the toys and books. His big brother, almost 6, and sister, 7 3/4, used to love the show too but have definitely been outgrowing it. I was worried as to whether they would be too old to enjoy the show, but actually, they both said it was awesome and loved seeing their old favourites on the stage. 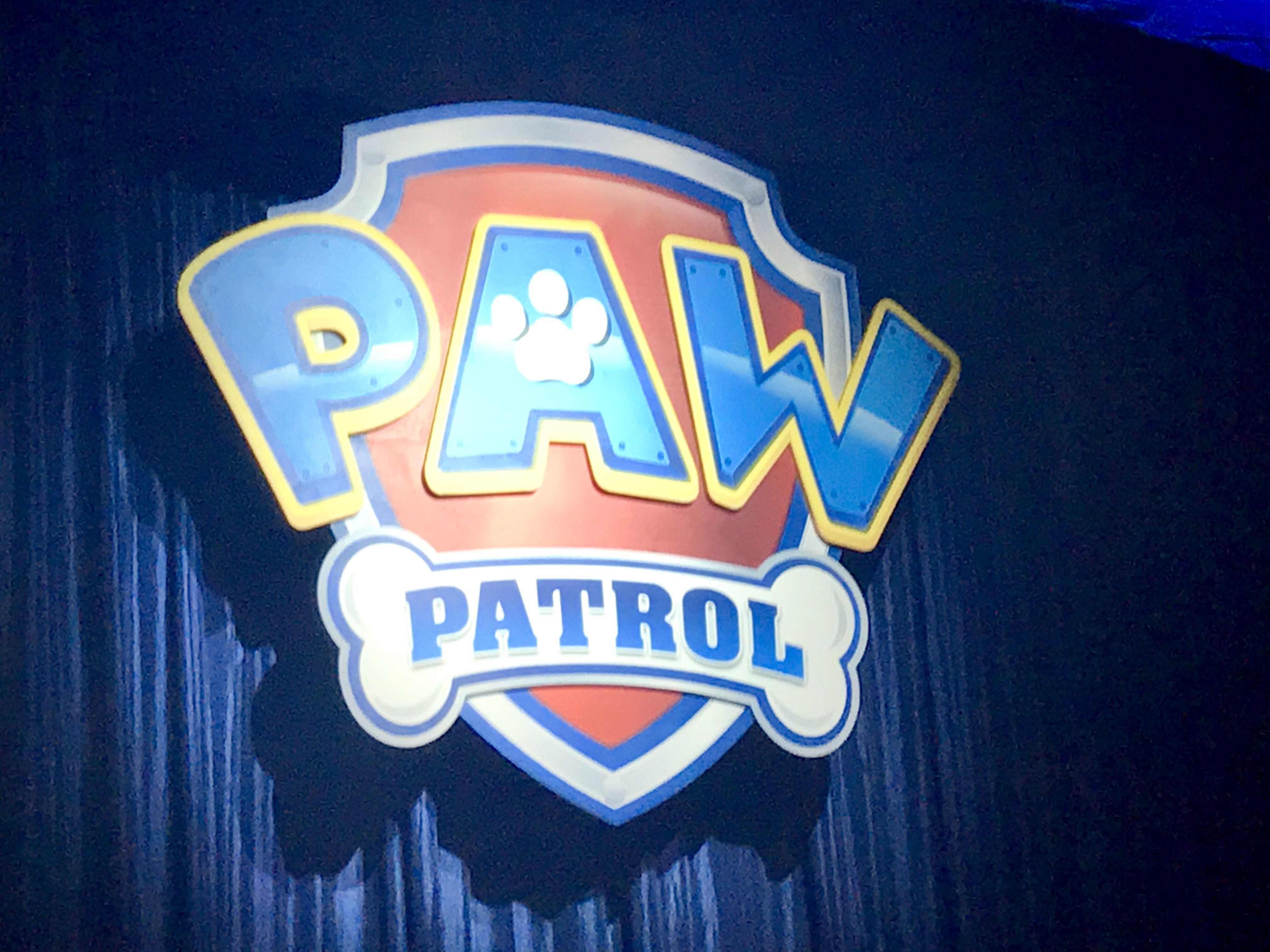 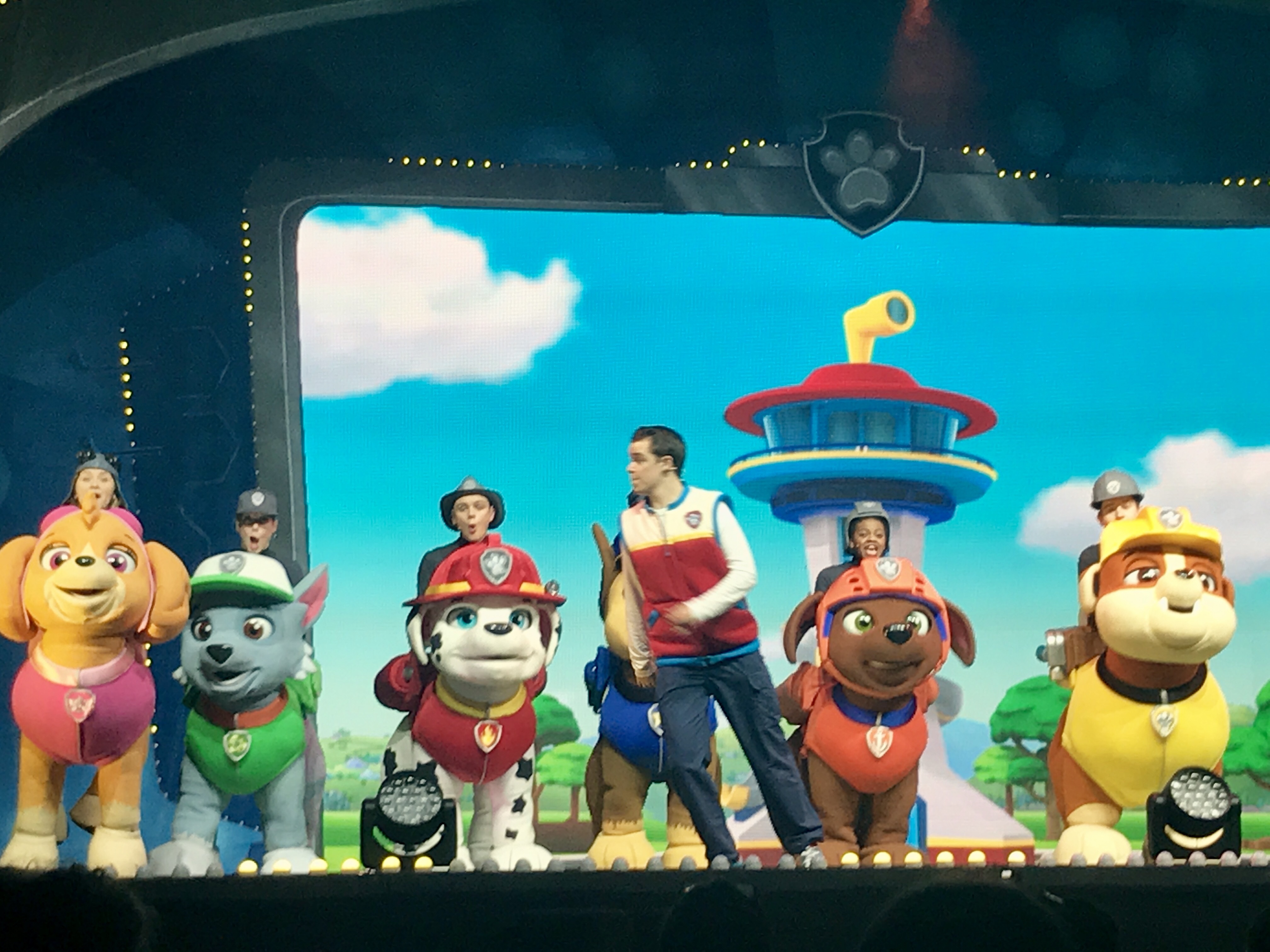 The show is set on the day of the Great Race between Mayor Goodway of Adventure Bay and Mayor Humdinger of Foggy Bottom. When Mayor Goodway injures her foot and can no longer race, the Paw Patrol come to the rescue, taking her place. The two teams compete to find all the clues to help them cross the finishing line and win, with Humdinger and his gang of cats doing their best to thwart the pups’ efforts. 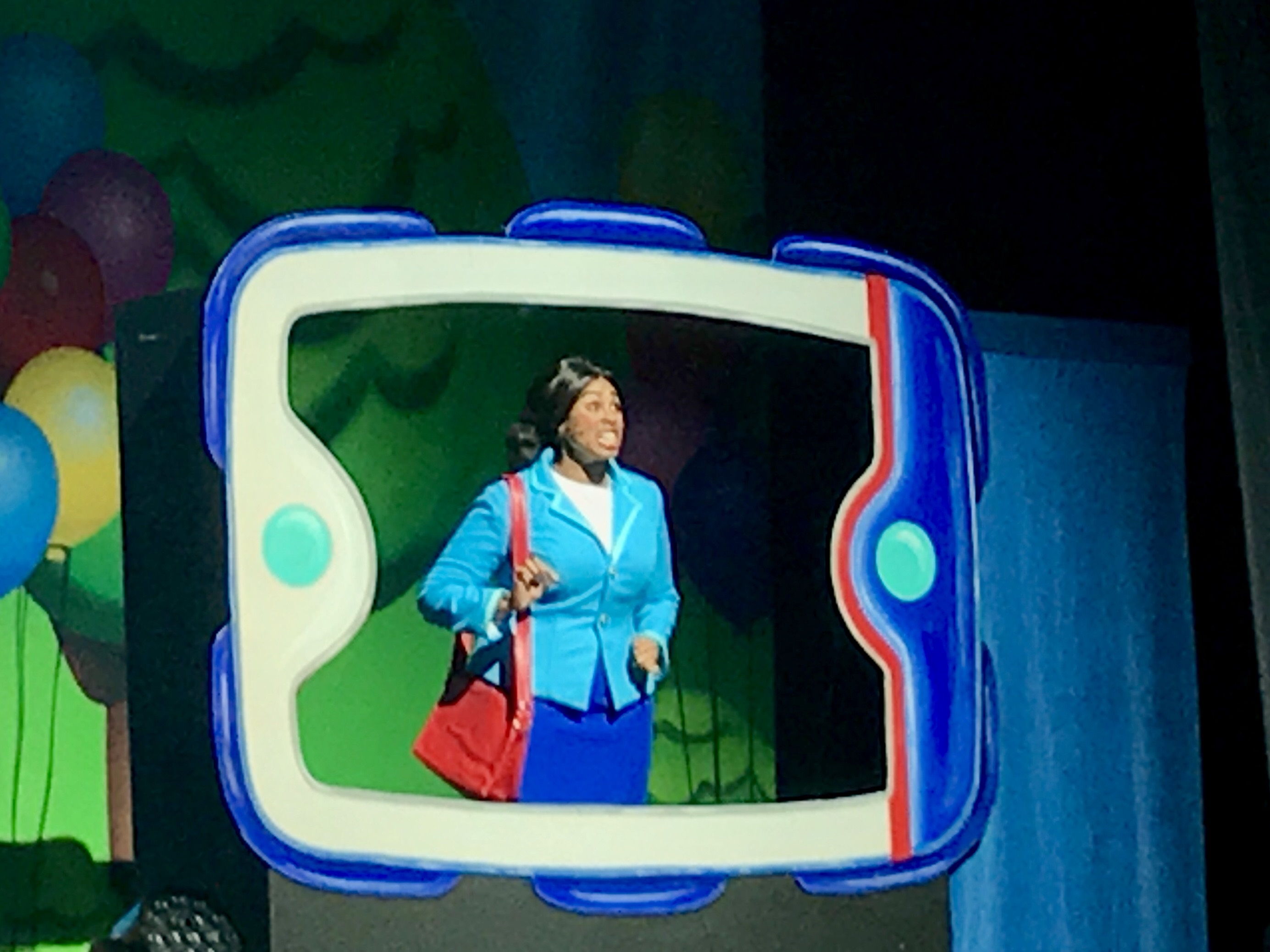 The pups’ costumes are brilliant and so visual; large-size plush puppet versions of the characters with the actors stood inside but with their heads still visible. There were audible gasps when the pups came out in their cars, looking just like the ones on TV and in toy boxes across the land. I’ve seen stage adaptations featuring children’s favourite characters before where small puppets have been used or interpretive costumes, which are clever from a grown-up point of view but not easily-recognisable for a young child, so I thought these were spot on and perfect for such a large venue. 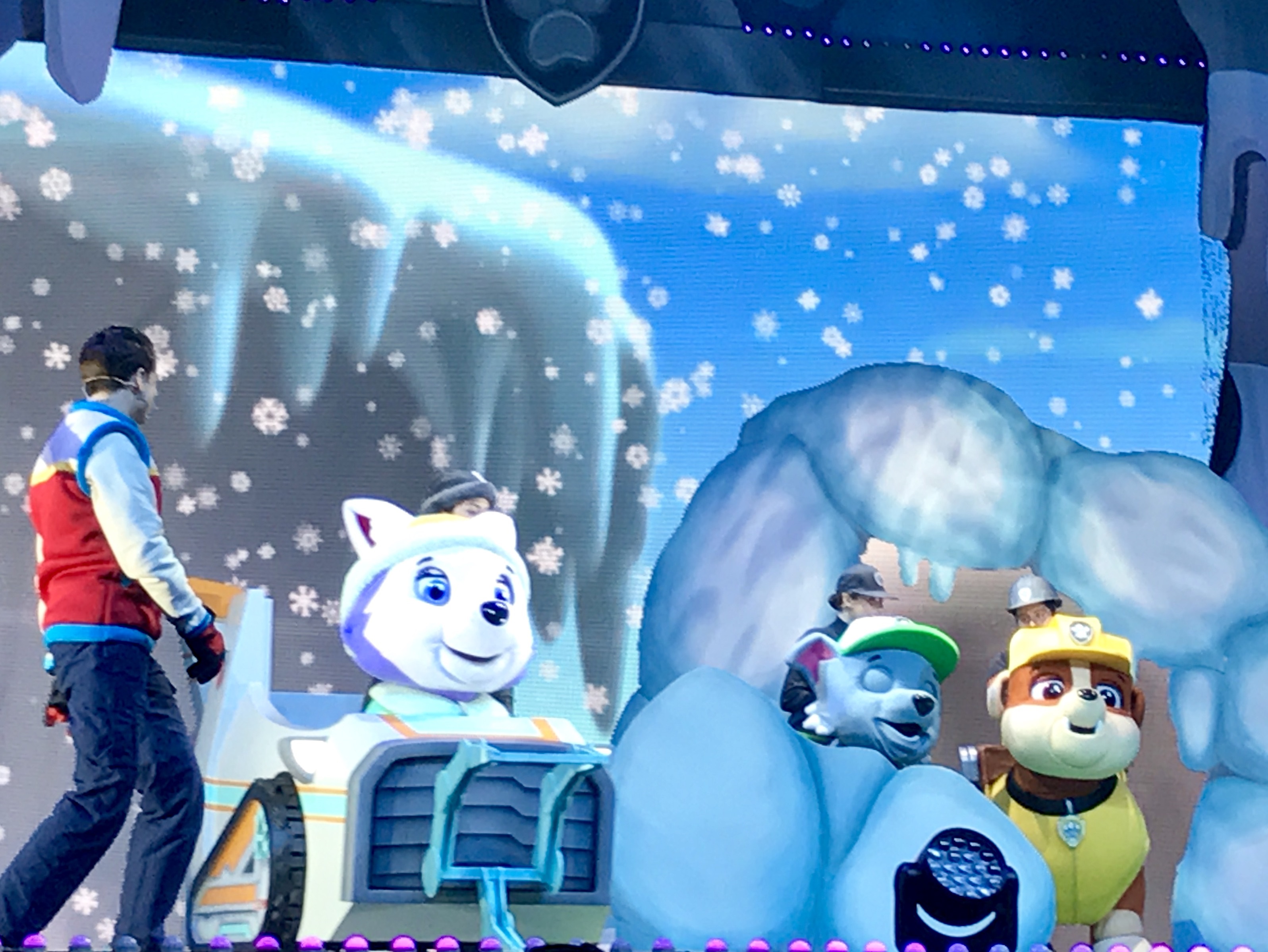 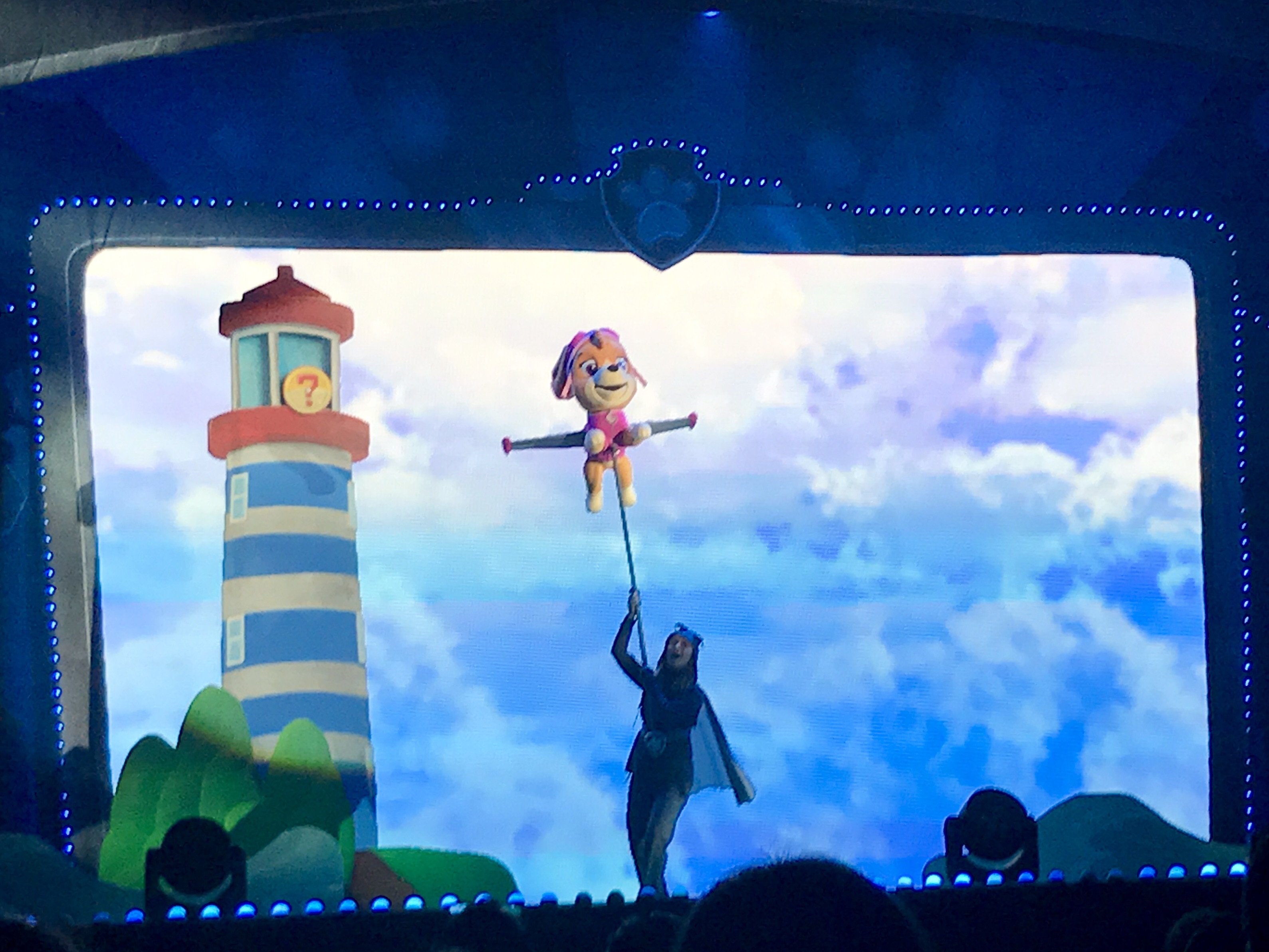 The show involved a few rescues along the route of the race, with each of the pups having the opportunity to use their skills but ultimately working as a team to save the day. My children particularly loved seeing Wally the Walrus in a deep sea diving rescue mission involving Zuma; and Skye (on a stick!) flying across the stage towards the lighthouse.

A giant video screen features the familiar locations where the action takes place, such as Farmer Yumi’s Farm, Seal Island and Jake’s Mountain, while a giant frame at the side of the stage allowed different characters to appear on Ryder’s Pup Pad. Mayor Goodway and her Chickaletta Cheer Squad were popular, engaging the audience in call and response songs. At one point the audience are projected onto the big screen on the stage to much delight. 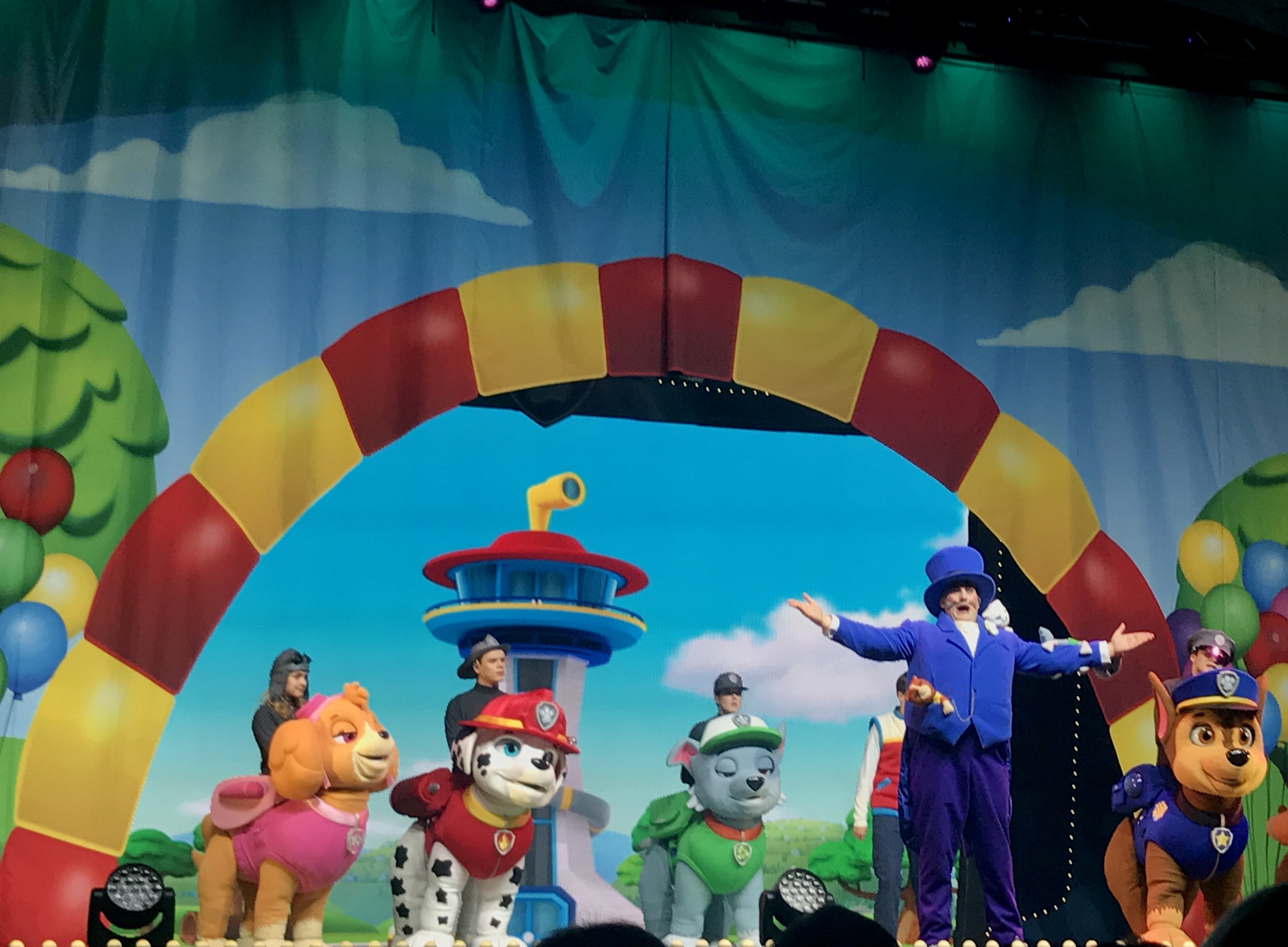 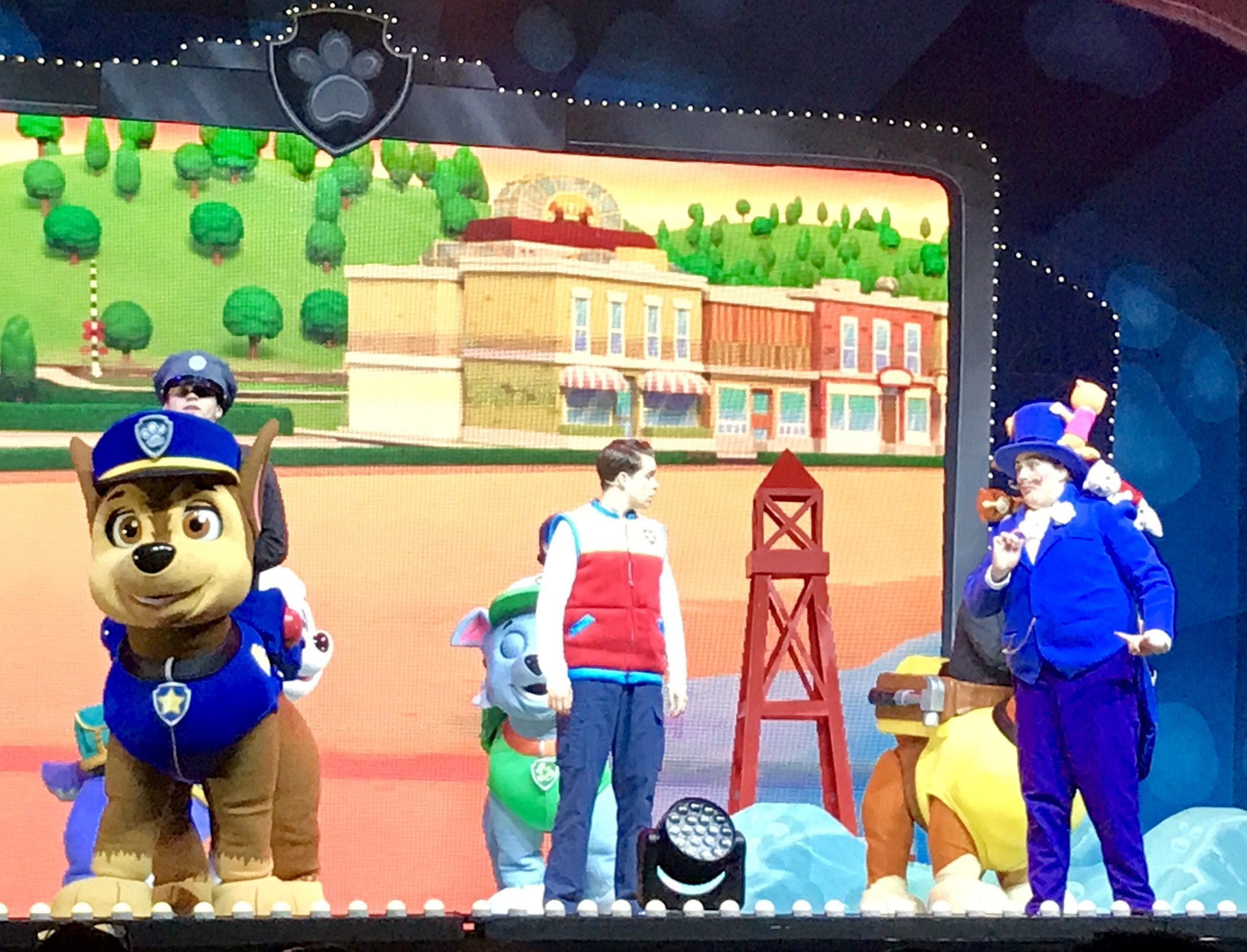 Considering they have already spent a month on tour, the cast were incredibly energetic and enthusiastic and really kept the children’s attention. Mayor Goodway in particular stood out for me, sounding exactly like her cartoon counterpart (and just as hopeless a mayor too!). I have no idea how she managed to sustain that voice for the duration though. 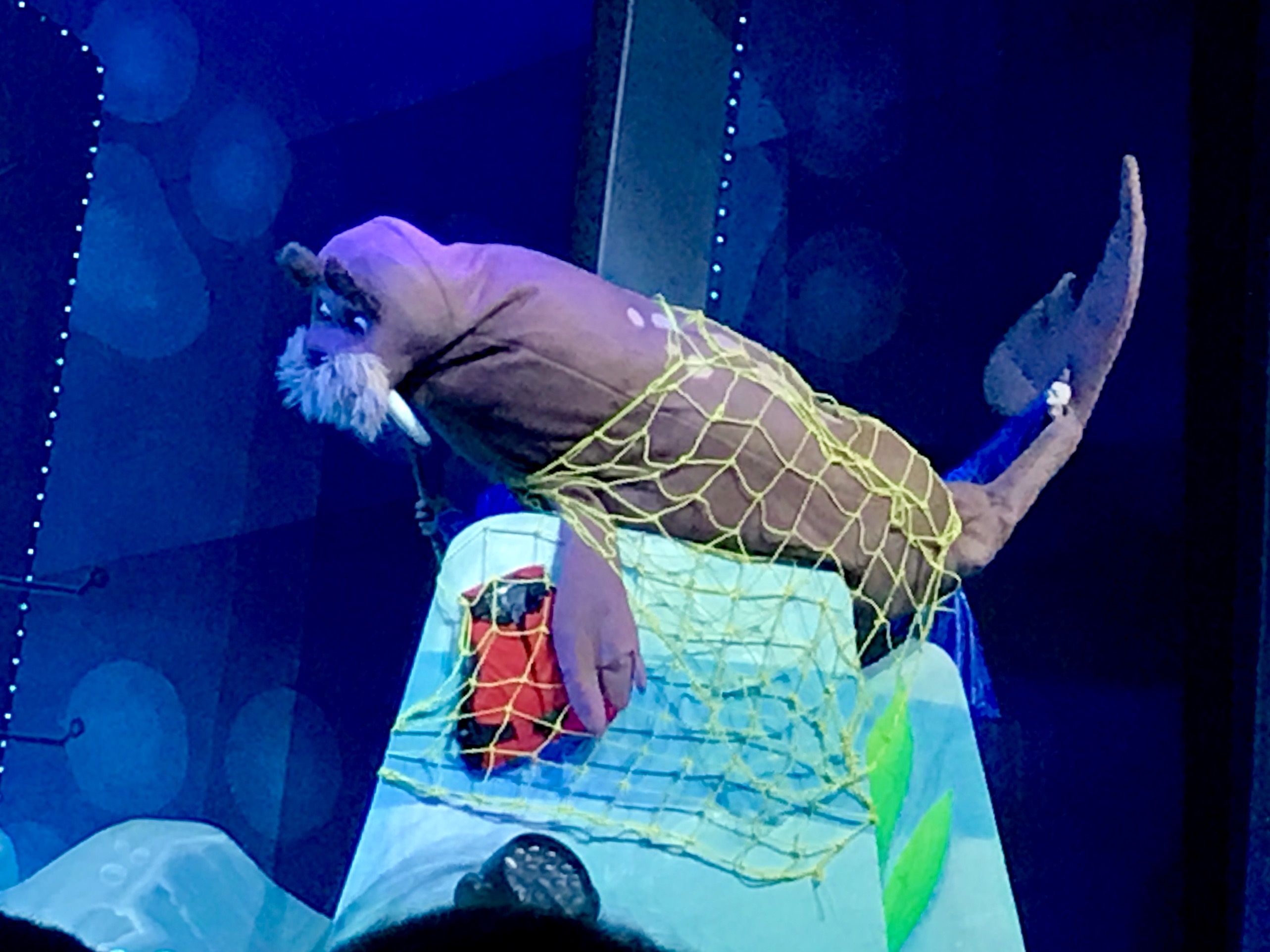 The show is 75 minutes including a 15-minute interval. I thought this was about right for the young audience. I also don’t think the show could sustain any more. It’s basically an extended TV episode with songs and interaction to eek it out. Overall though it’s great family-friendly entertainment and fans of the TV series will love seeing their pup heroes magically brought to life on the stage. 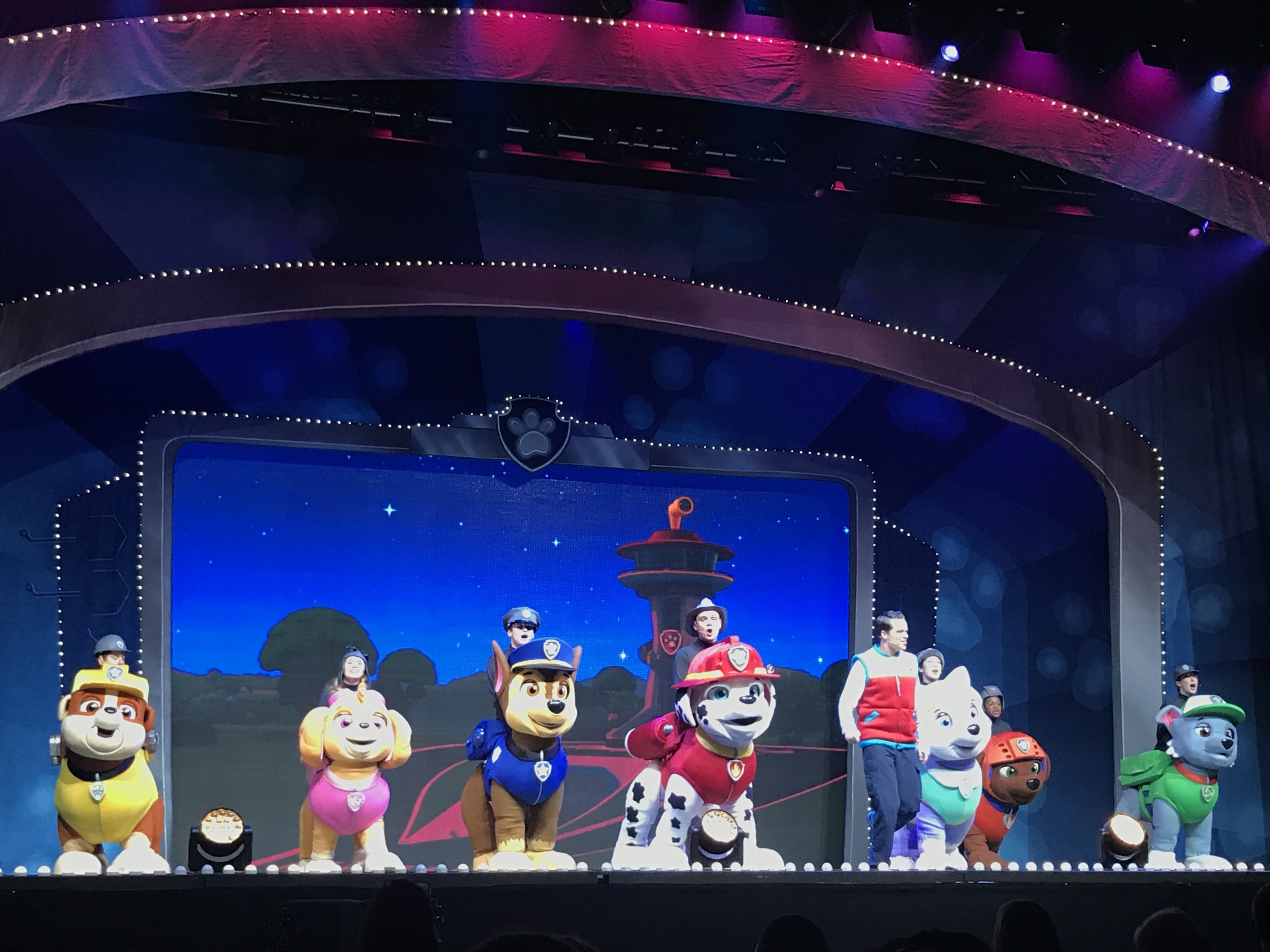 There are still some tickets available for tomorrow (Sunday 27th August) via the Motorpoint’s website ranging from £17.75 to £41.55 per person with good discounts on family tickets.

Have you been to see Paw Patrol Live? Let me know what you thought in the comments below, on the Cardiff Mummy Says Facebook page or by tweeting me on @cardiffmummy

*Thanks to Paw Patrol Live for the review tickets