One of my favourite places in South Wales is the beautiful Dunraven Bay, often called Southerndown after the name of the village where it’s situated, near Bridgend.

I love the dramatic rocky coastline of the Heritage Coast and the beautiful sand which magically appears beyond the pebbles when the tide is out. Before we had kids, Cardiff Daddy and I would head there to the beach and walk along the cliffs and the walled gardens too.

It’s a place we now love visiting as a family, but don’t seem to get to as often as we should. So on a beautiful sunny day last week, I decided to pack up the car and head there with the kids for a day at the seaside.

In my mind, we would be building sandcastles, splashing in the sea and generally soaking up the sun. Well, as much as you can when you are slathered in factor 50.

However, when we got to Southerndown, the cloudy skies were hiding the sun, the wind had picked up and there were even a few spots of rain! 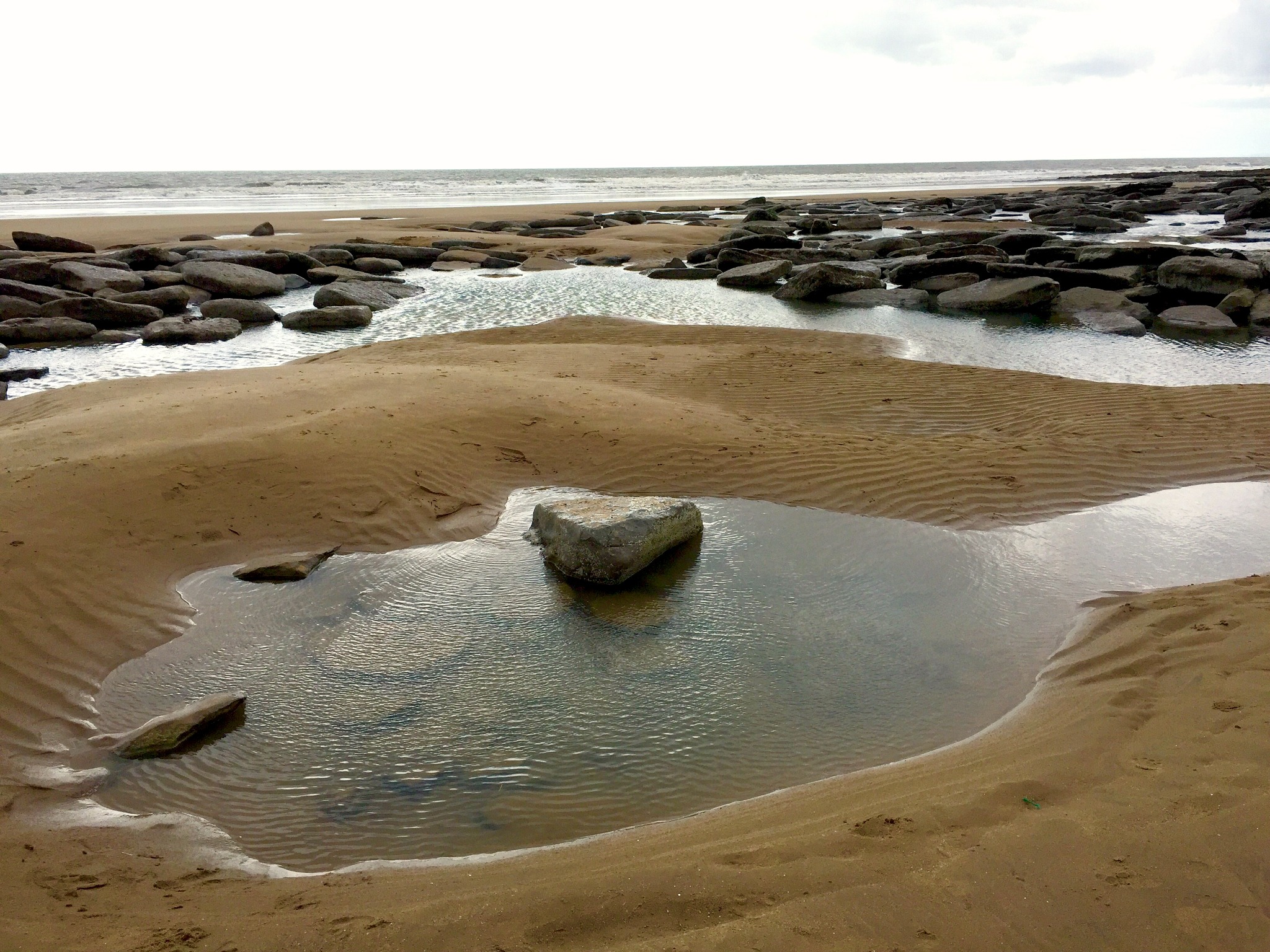 It might not have been the sunny beach day we’d had in mind, but having driven 40 minutes from North Cardiff (where I later found out the sun had been shining all day), and paid £4 for parking, we were going to make the most of this beautiful place.

One advantage of the weather not being great was that we didn’t have to share the beach with many other people. My children – 6.5-year-old Little Miss E, Little Man O who is nearly 5, and 2¼ year old Toddler Boy I – had great fun running around the beach, splashing in the rock pools and climbing over the pebble boulders. 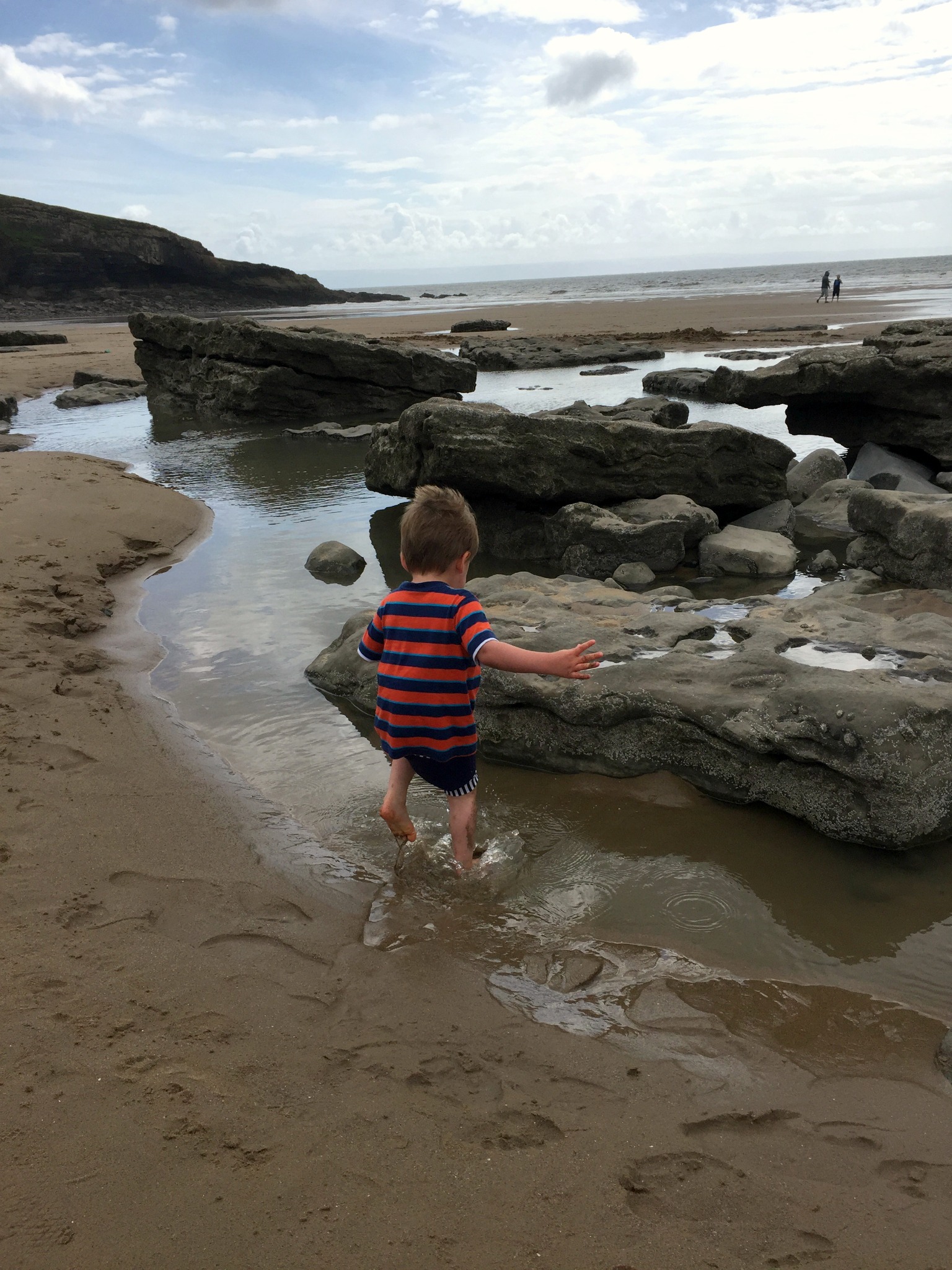 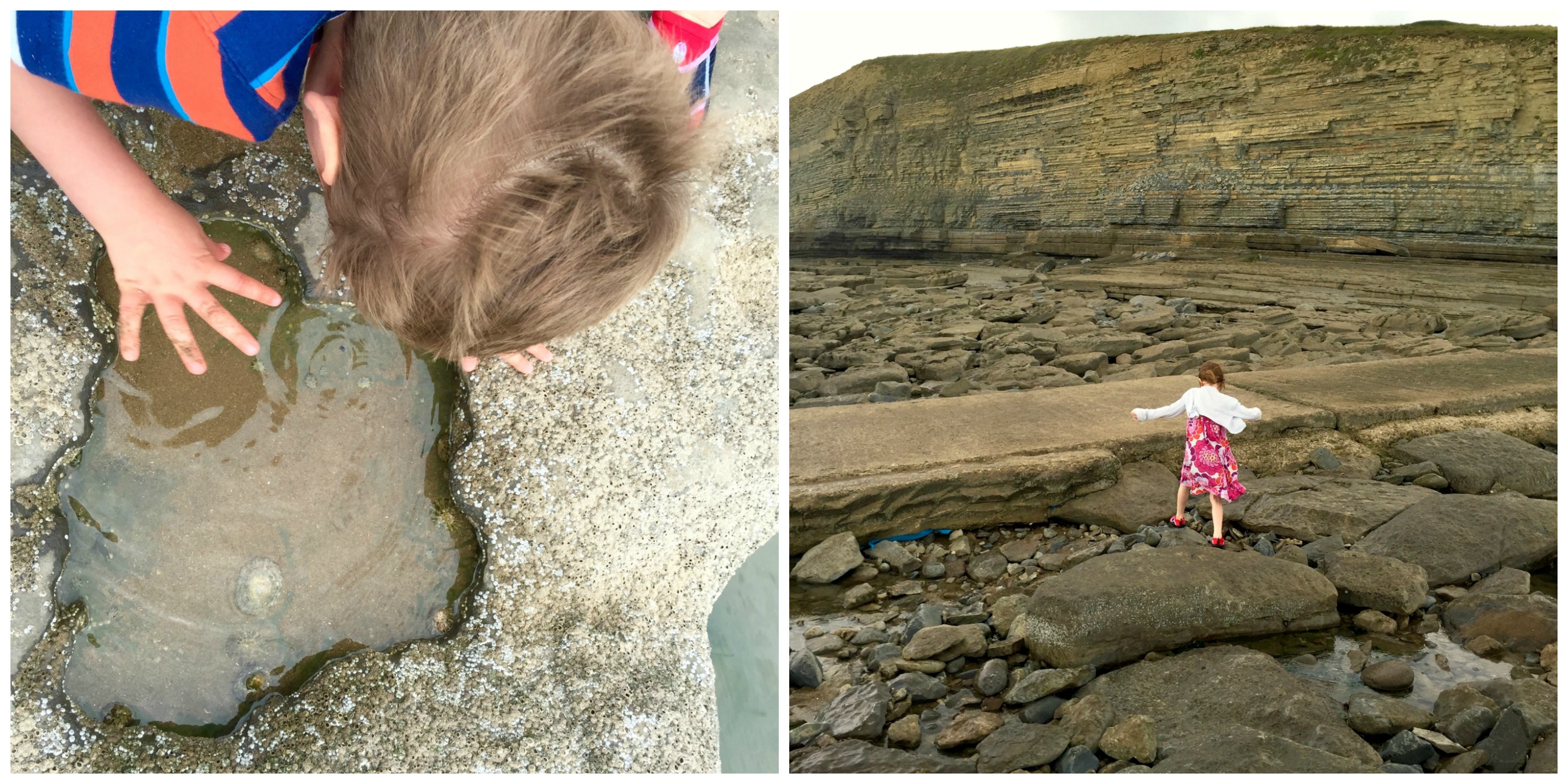 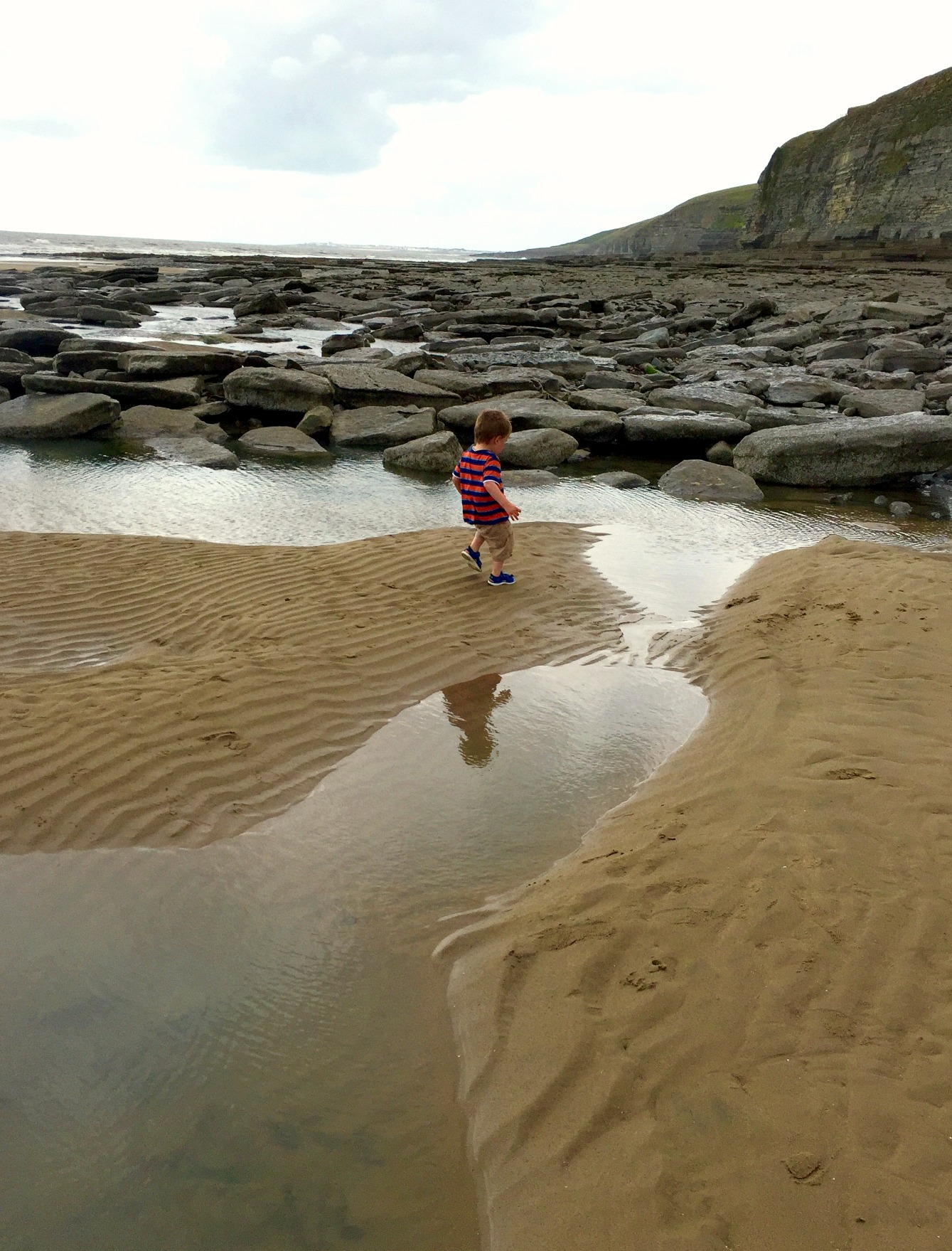 The sea was quite far out so the beach streams and pools which had formed around some of the rocks were a great alternative for splashing about in. At one point, the three of them were running around a pool in circles for about five minutes, pretending to be pirates searching for treasure.

It was too cold for the swimming costumes we’d ambitiously brought with us (wet suits would have been a much better idea) and while my eldest two were a little more sensible with their paddling and splashing, Toddler has no fear or worries about getting wet. It wasn’t long before he was jumping in fully clothed, with his shorts and t-shirt getting soaked in the process.

We stayed on the beach for around two hours, running around and exploring. But then the rain started to lash it down so we took that as our cue to leave and had a mad dash to the car. 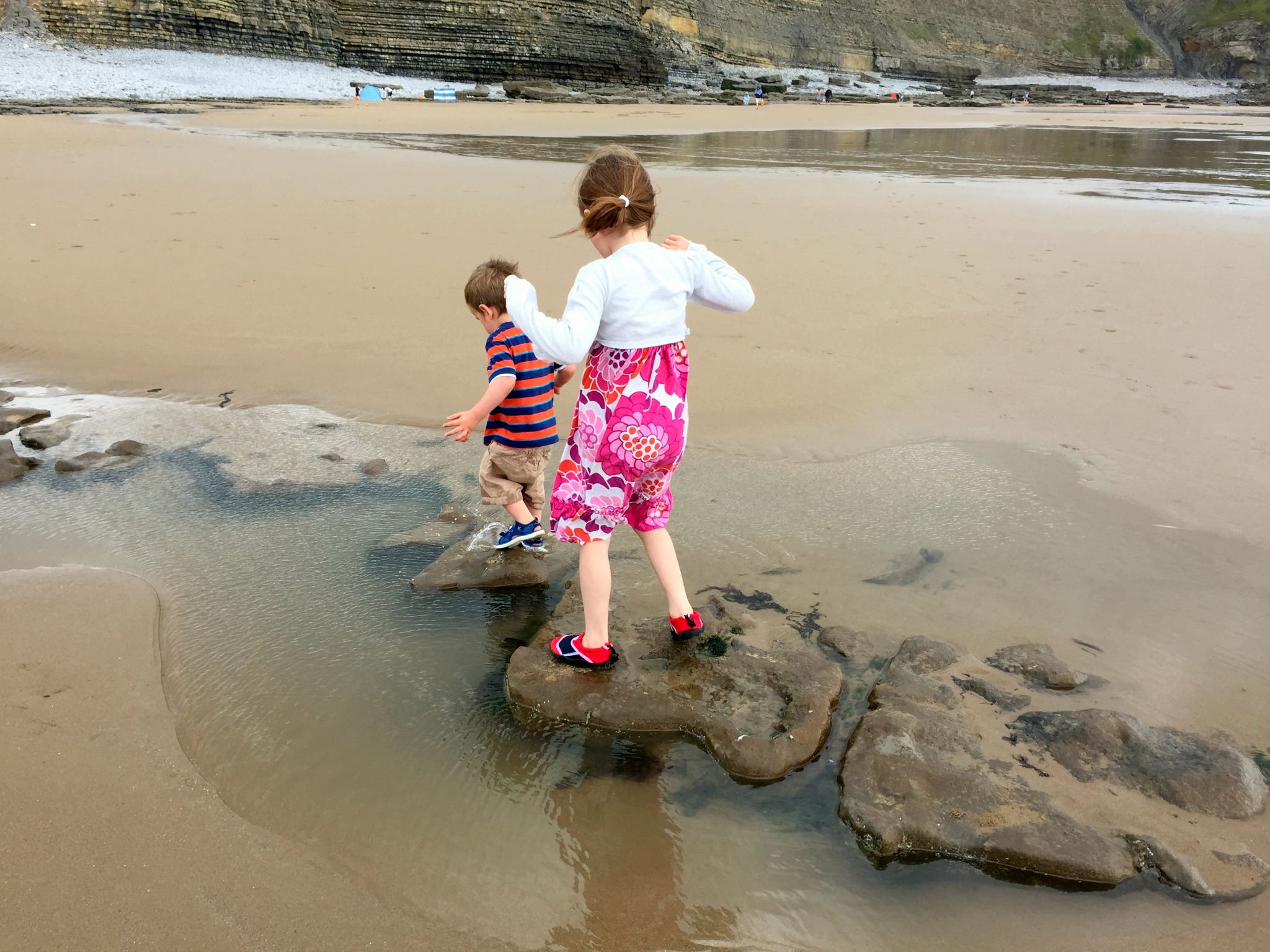 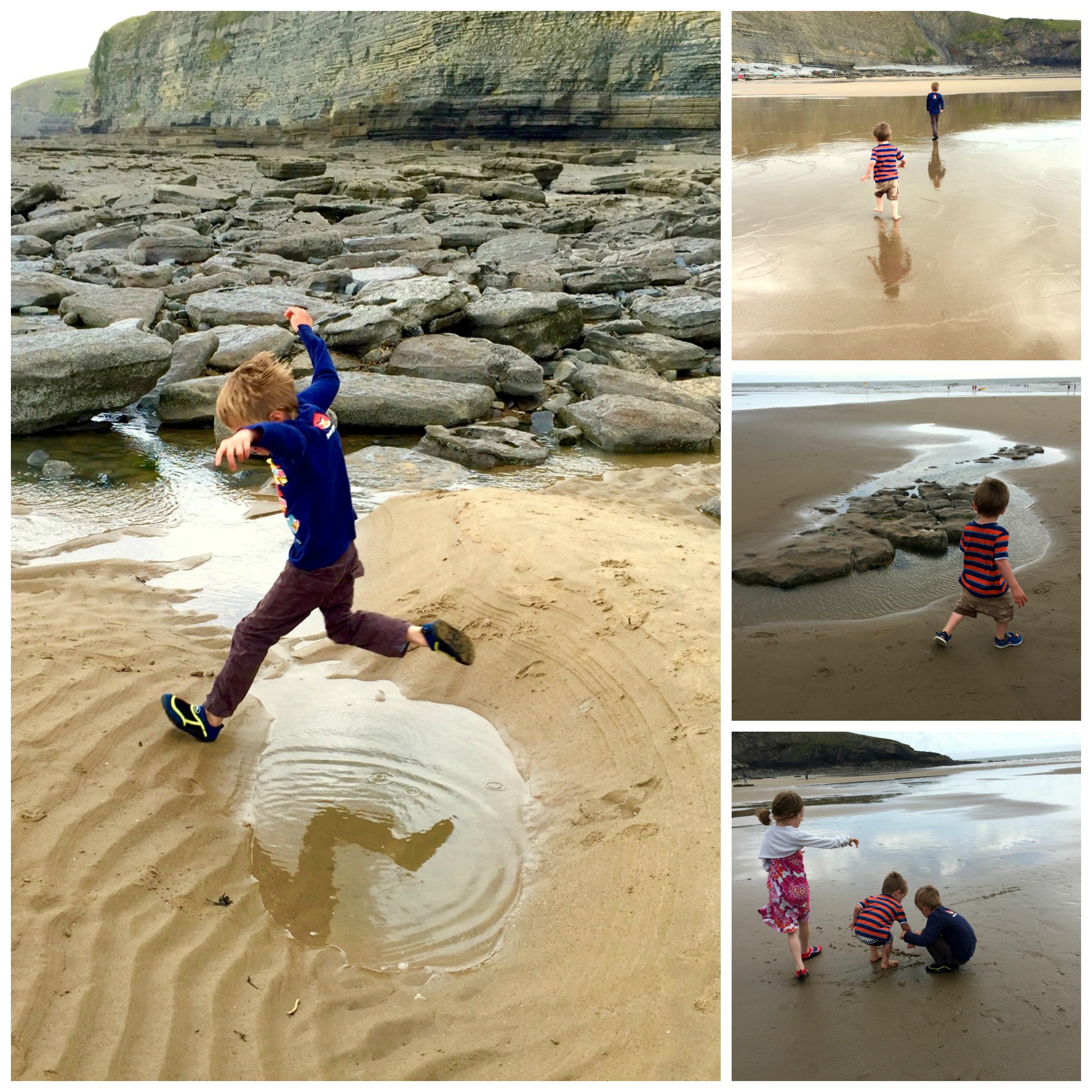 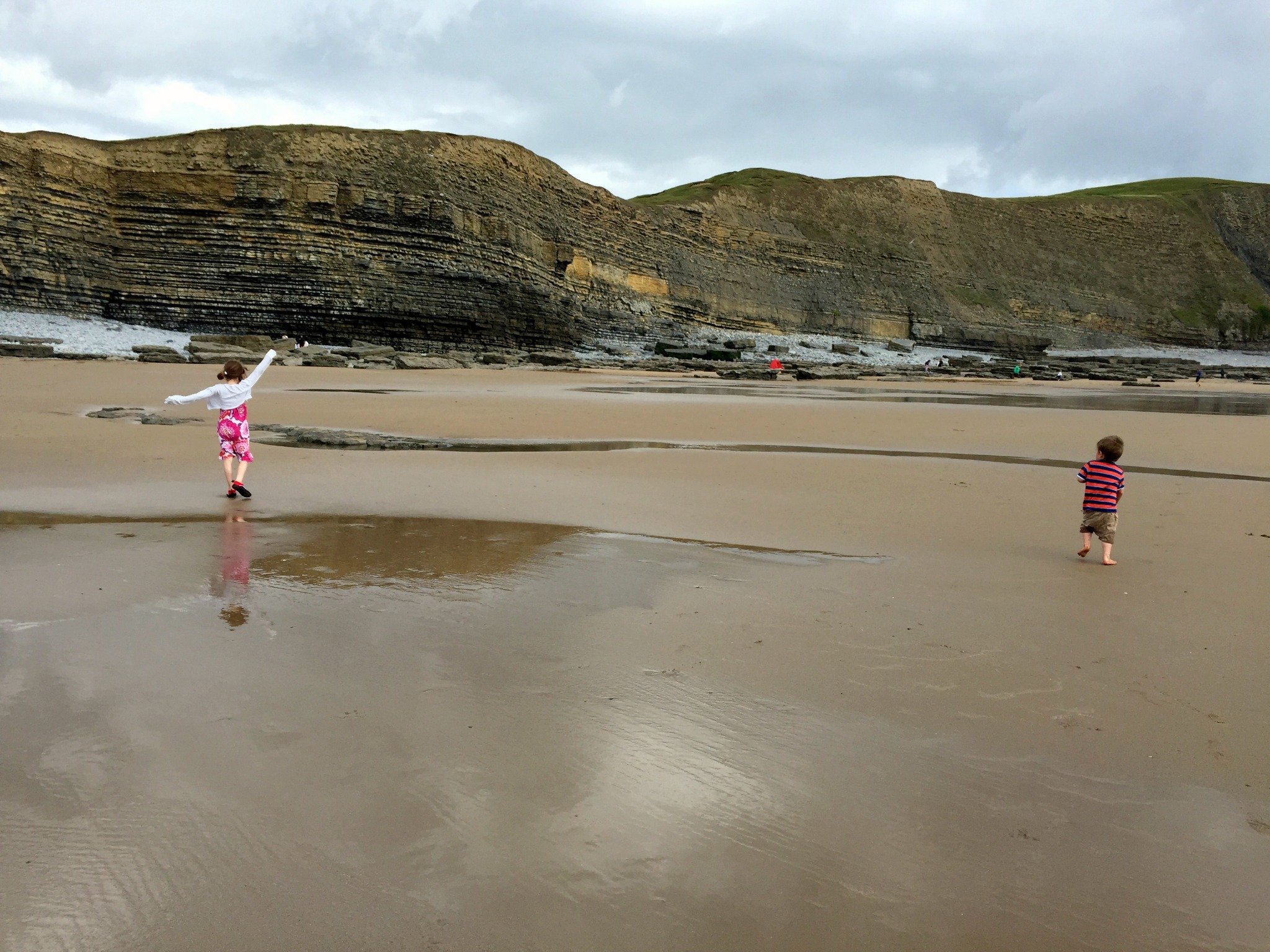 Luckily, there had been space for us to park in the smaller car park right by the sea front, rather than the bigger one up on the hill, which involves a short walk down to the beach. The beach towels came in handy to dry ourselves off.

Dunraven Bay is a gorgeous place to visit with children. It’s more rustic and rugged than the likes of tourist favourites Barry Island and Porthcawl. But that’s why I love it. There are toilets and a small kiosk serving ice creams and drinks, which is always handy when you have children, but that’s about it. The jetty means it is accessible for buggies and wheelchairs – although do check tide times if you want to see the sand, because when the tide is up you’re left with pebbles and rocks. Also be wary you don’t get cut off by the incoming tide and note the warning signs of falling rocks and don’t stray too close to the cliffs.

We used the postcode CF32 0RP to get there. 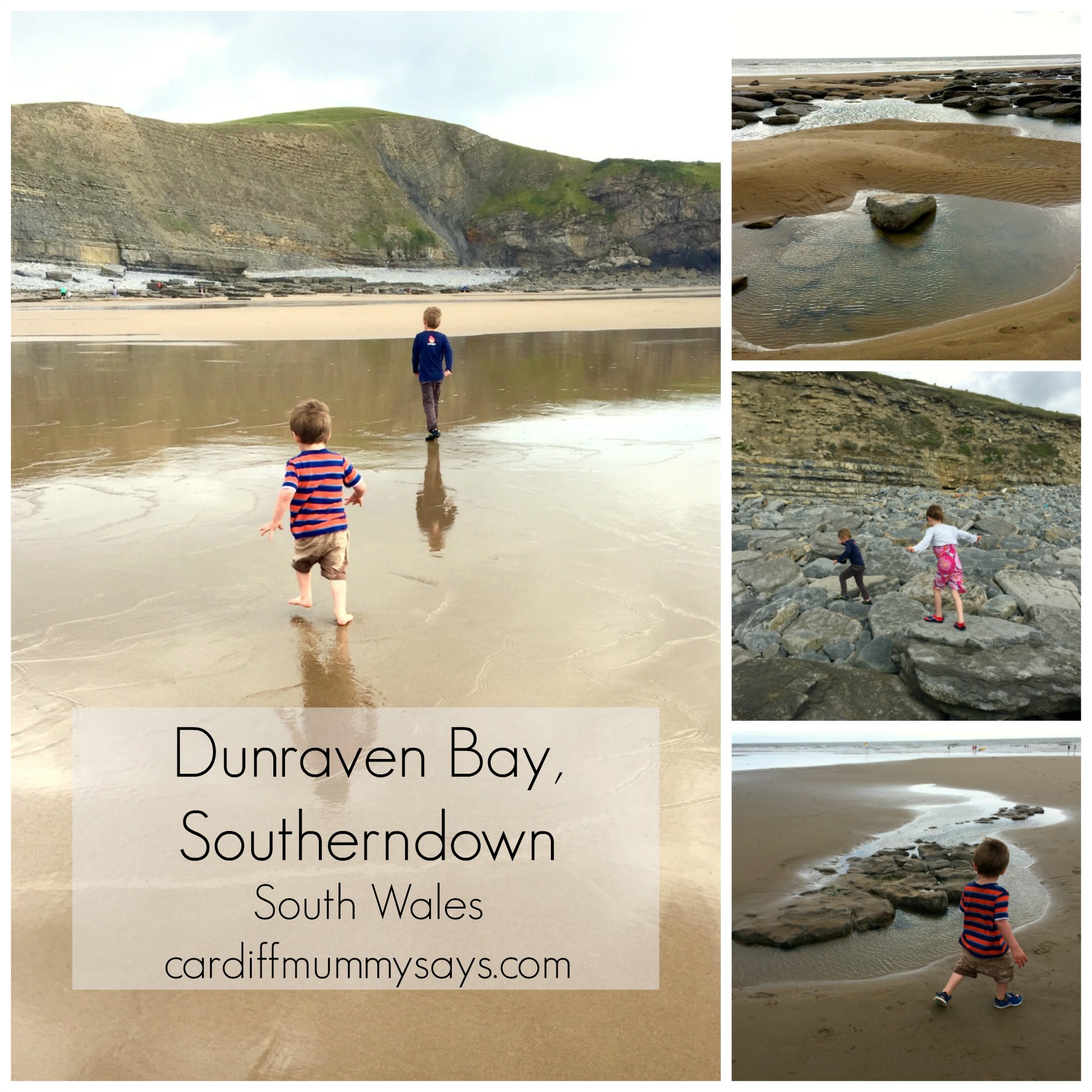 Have you been to Dunraven Bay with your little ones? Do let me know in the comments section below, on the Cardiff Mummy Says Facebook page or by tweeting me on @cardiffmummy

5 Comments to A windy day at Dunraven Bay, Southerndown