Like a lot of families, playing with Lego is a daily occurrence in our house. My children can’t get enough of the stuff. My middle child had a Lego-themed seventh birthday party recently and my four year old can’t leave the house without a pocket-full of Lego mini figures.

So you can imagine how excited they were to see 12 big cats made of Lego, currently on display in Cardiff Bay this half term

This is the UK premiere of the Big Cats display and follows the success of February’s Lego Safari which saw a Lego lion gorilla and kangaroo on display, among other creatures.

The Lego Big Cats opened on Saturday and will be in Cardiff until Sunday 4 November. 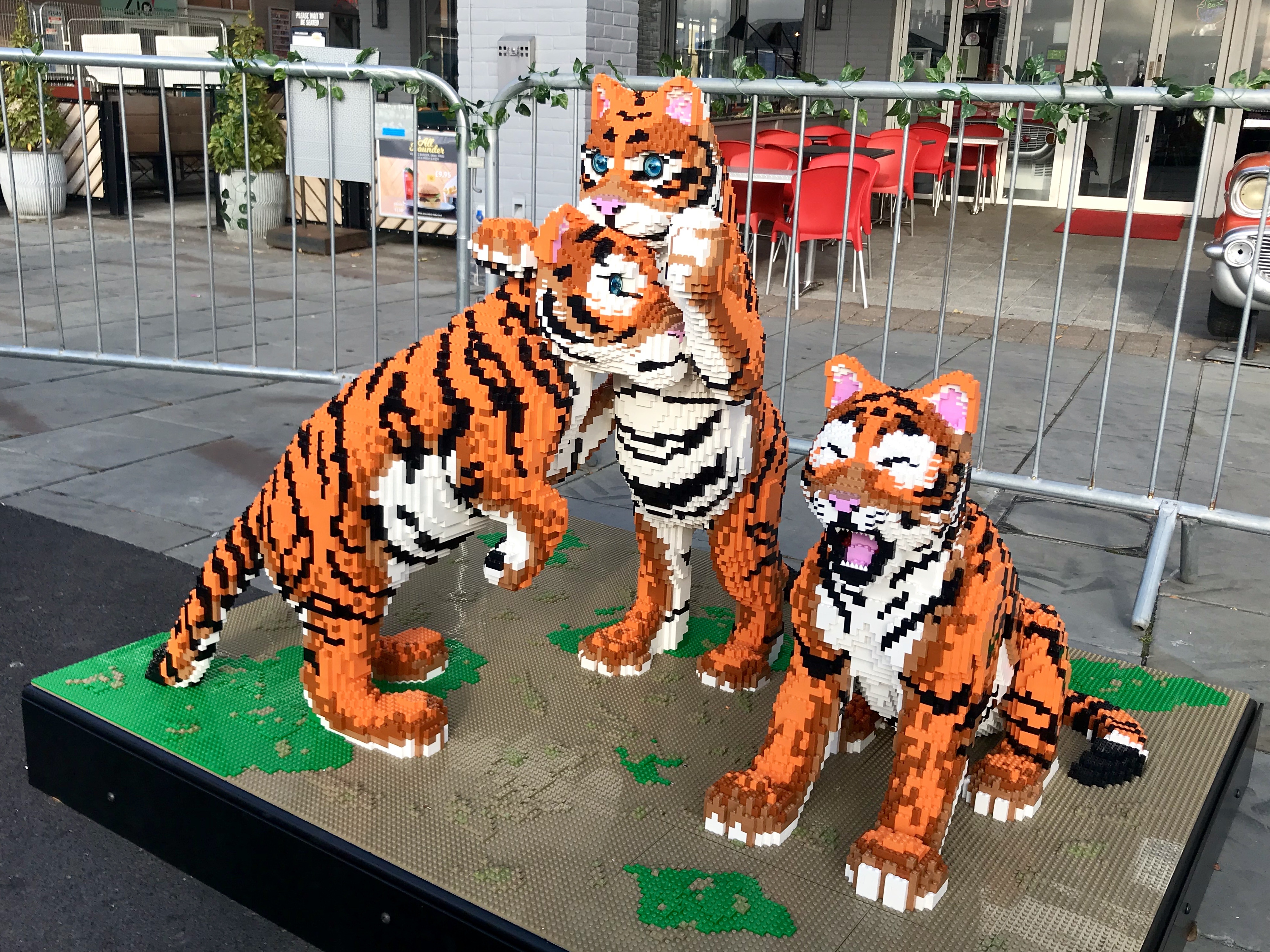 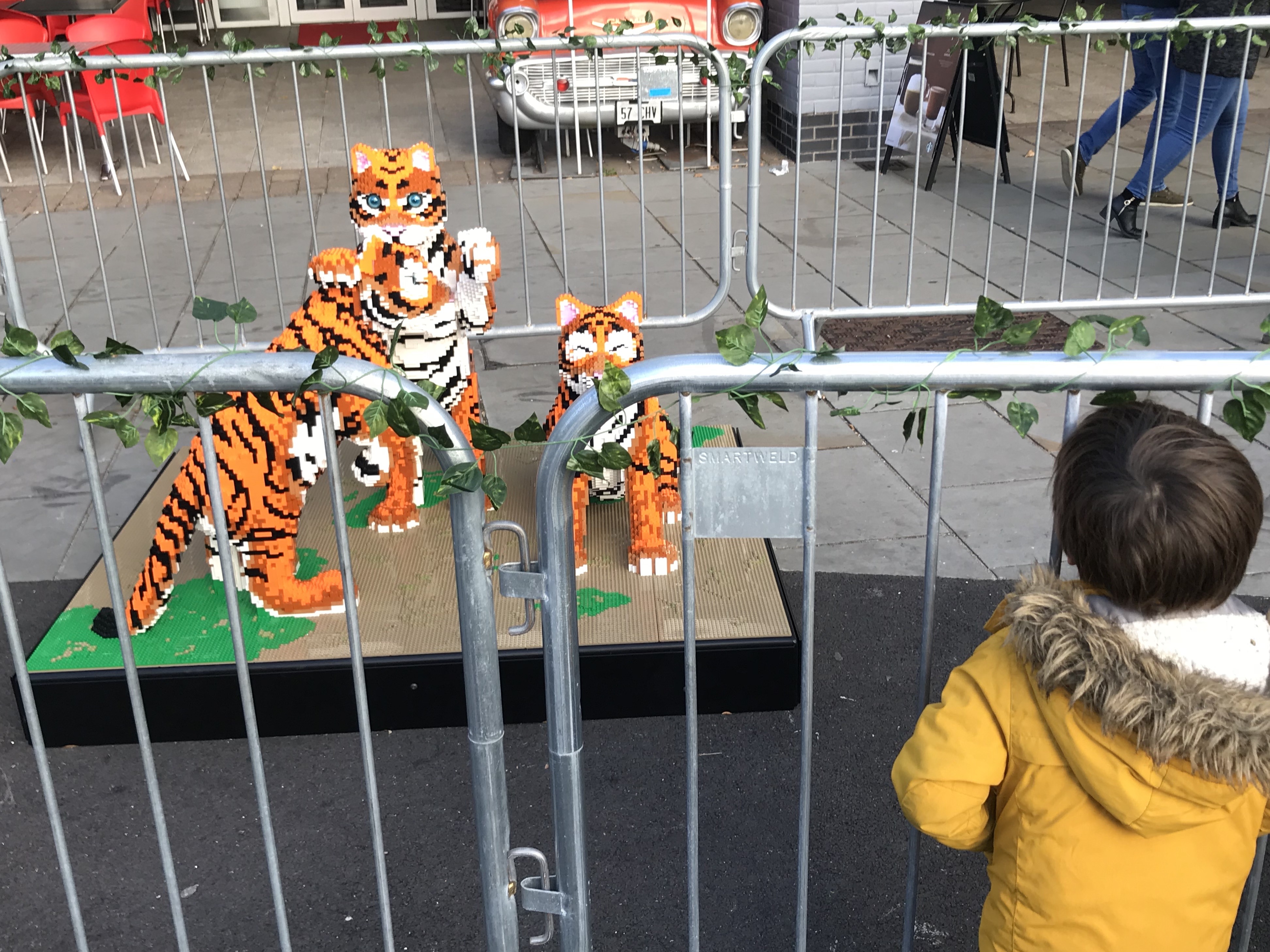 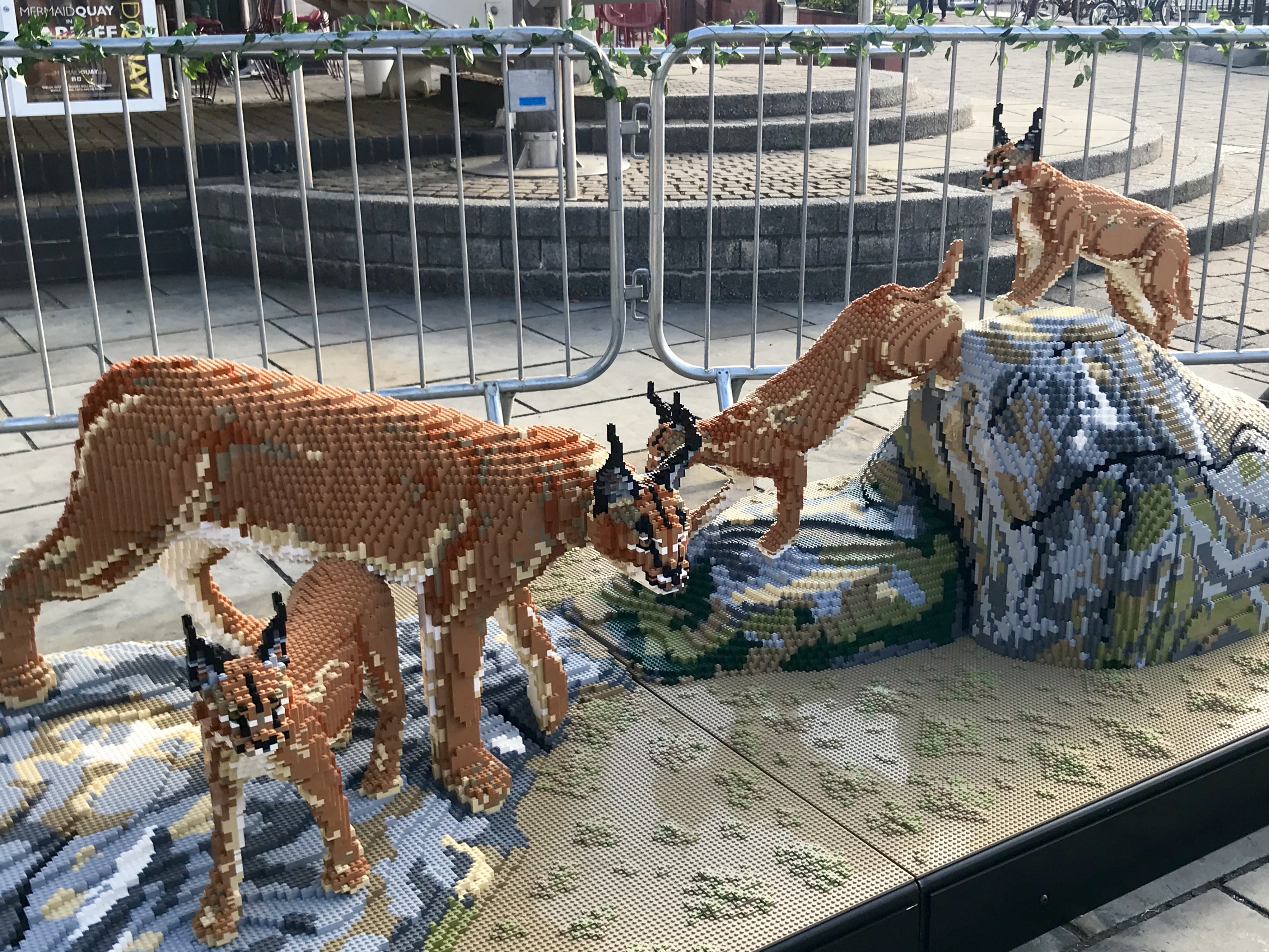 We headed there on Monday morning – bright and early so we could see the big cats before the crowds and try to get photos without dozens of random people in the background. It was a wise decision because when we walked past a few hours later we could hardly see the cats due to all the visitors.

The big cats are on display 24 hours a day at Tacoma Square, the central area between the bars and coffee shops of Mermaid Quay overlooking the water. However the central area – which includes a lion and tiger you can touch and pose for photos with – is open from 10am-6pm. The other animals are behind metal fences with security guards in attendance to keep them safe. 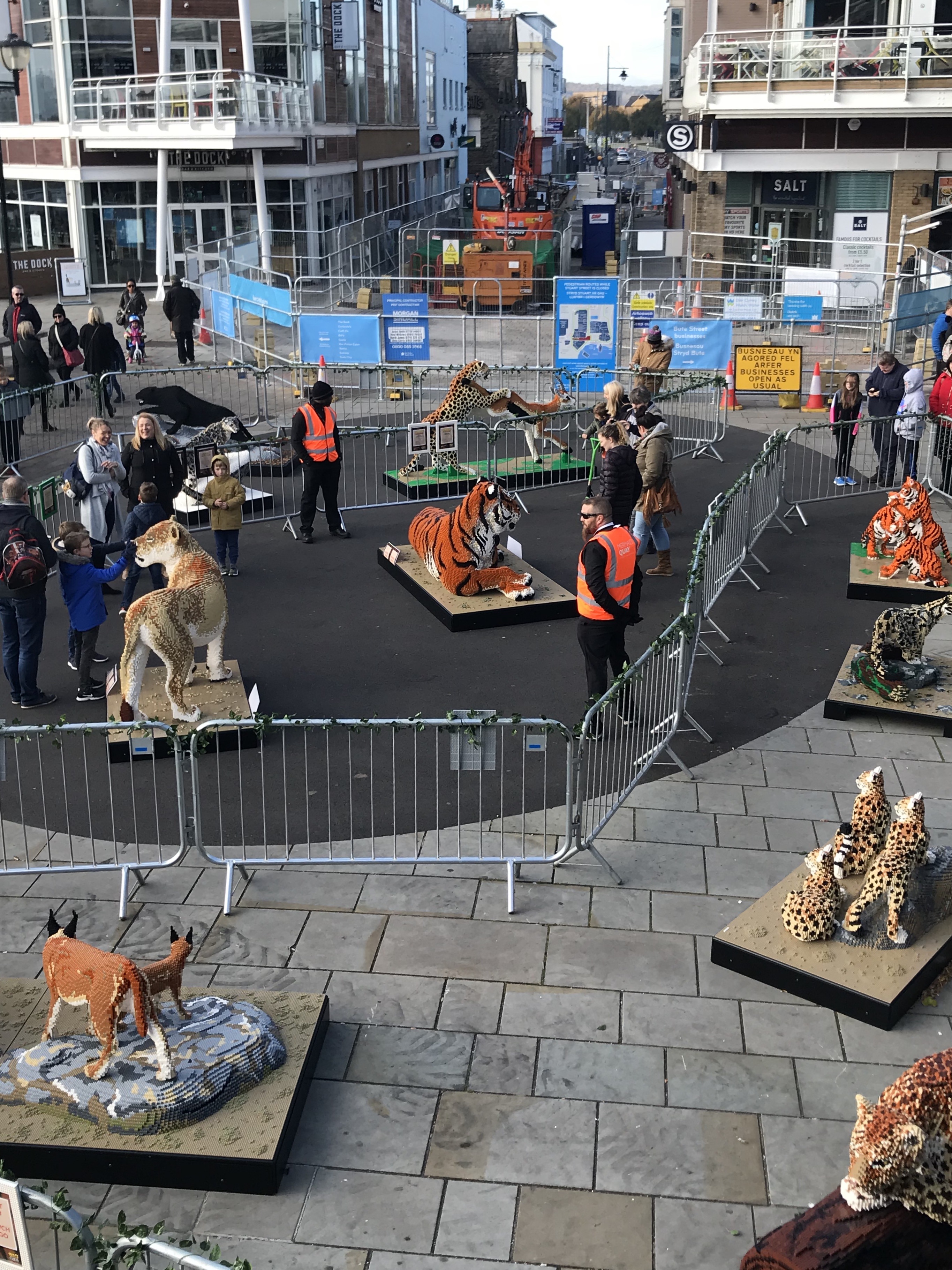 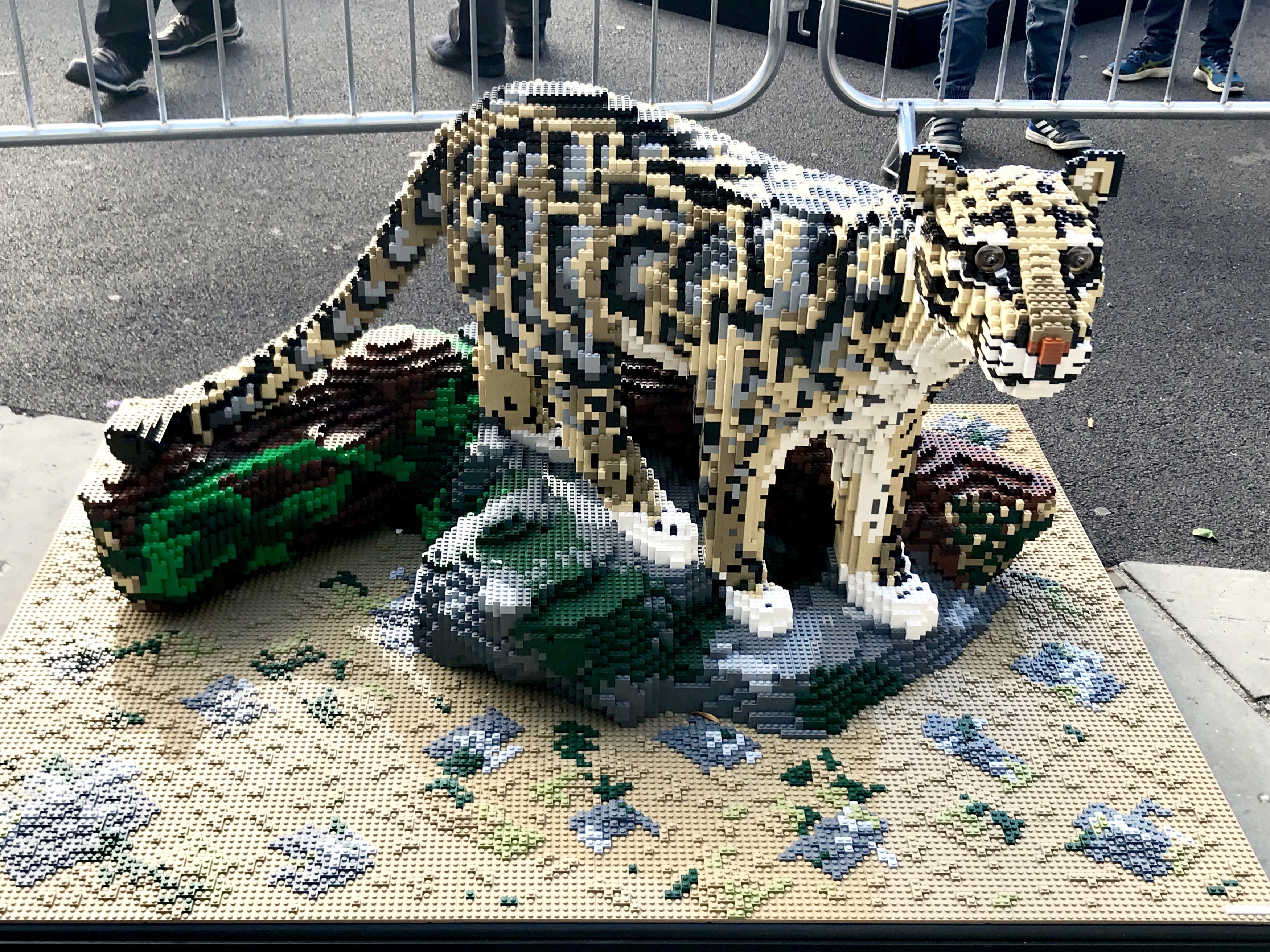 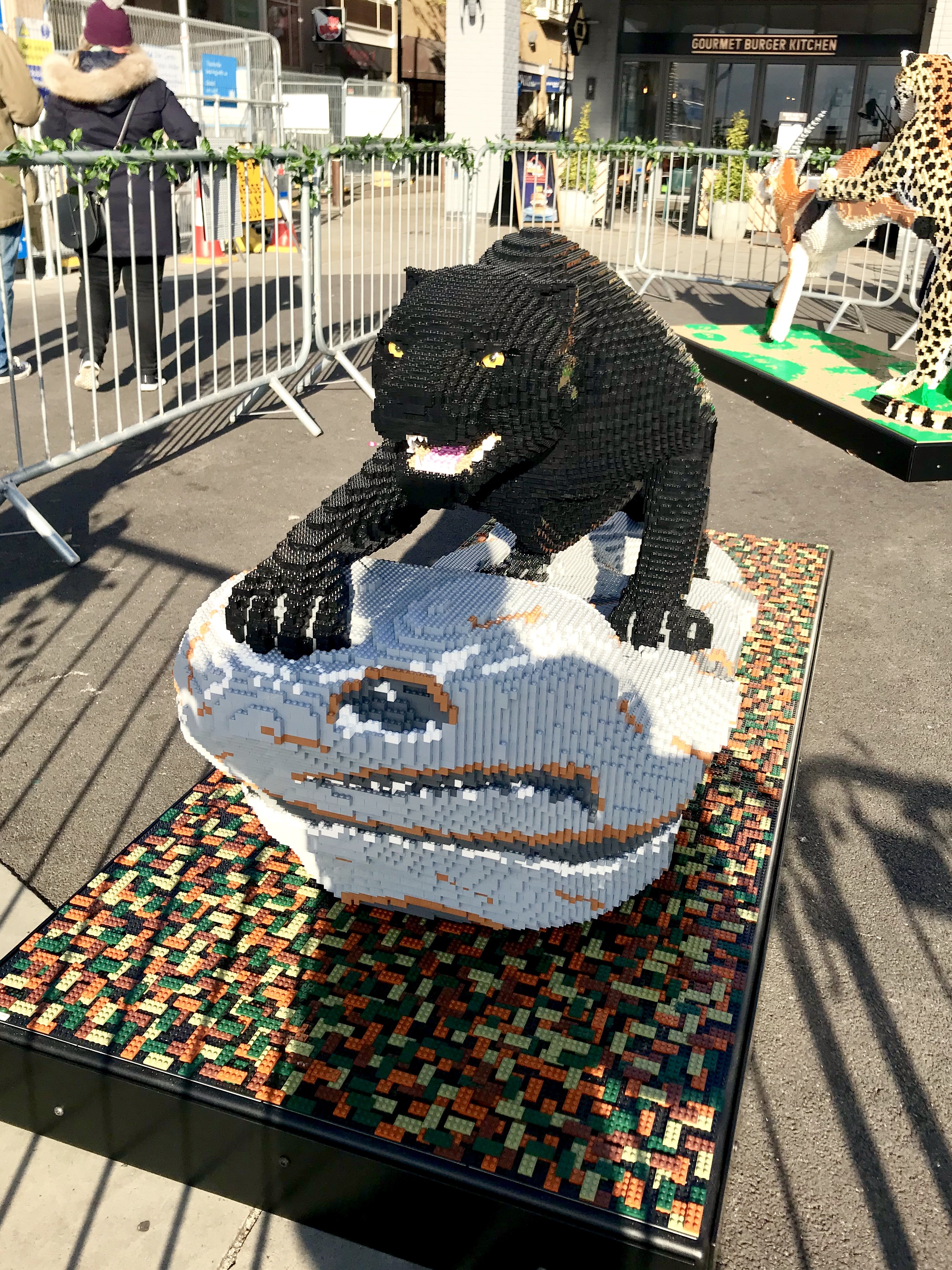 The 12 cats took almost 1,750 hours to build and comprise nearly 650,000 bricks. They are created by Bright Bricks, a professional Lego building company whose team of 30 Lego artists create custom-built creations for clients across the UK and the world.

The big cats are incredible – the skill involved in creating them is so impressive. We loved that the information boards near each cat told us more about where they came from in the world, their habitat and, in many cases, how endangered they are. 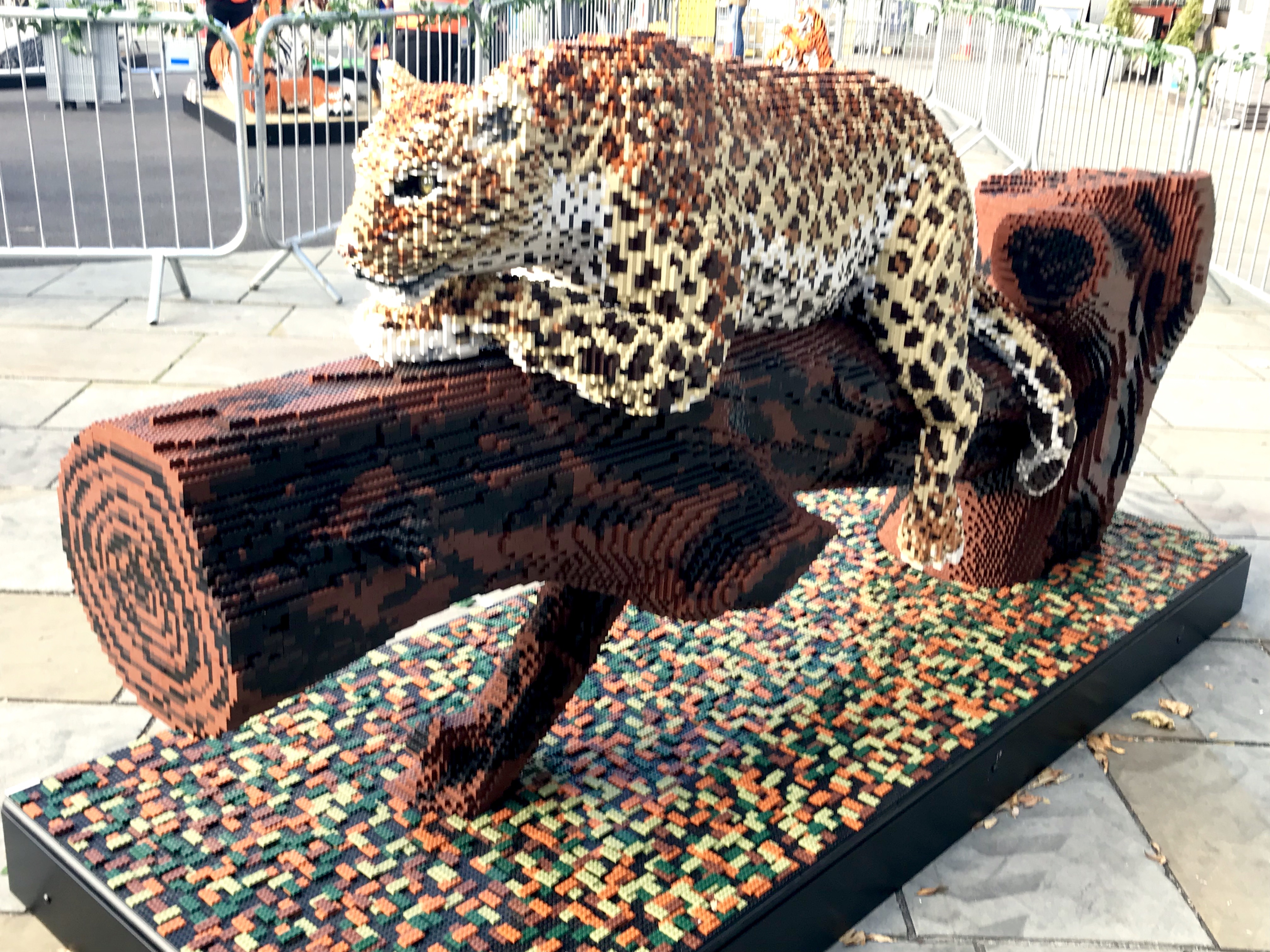 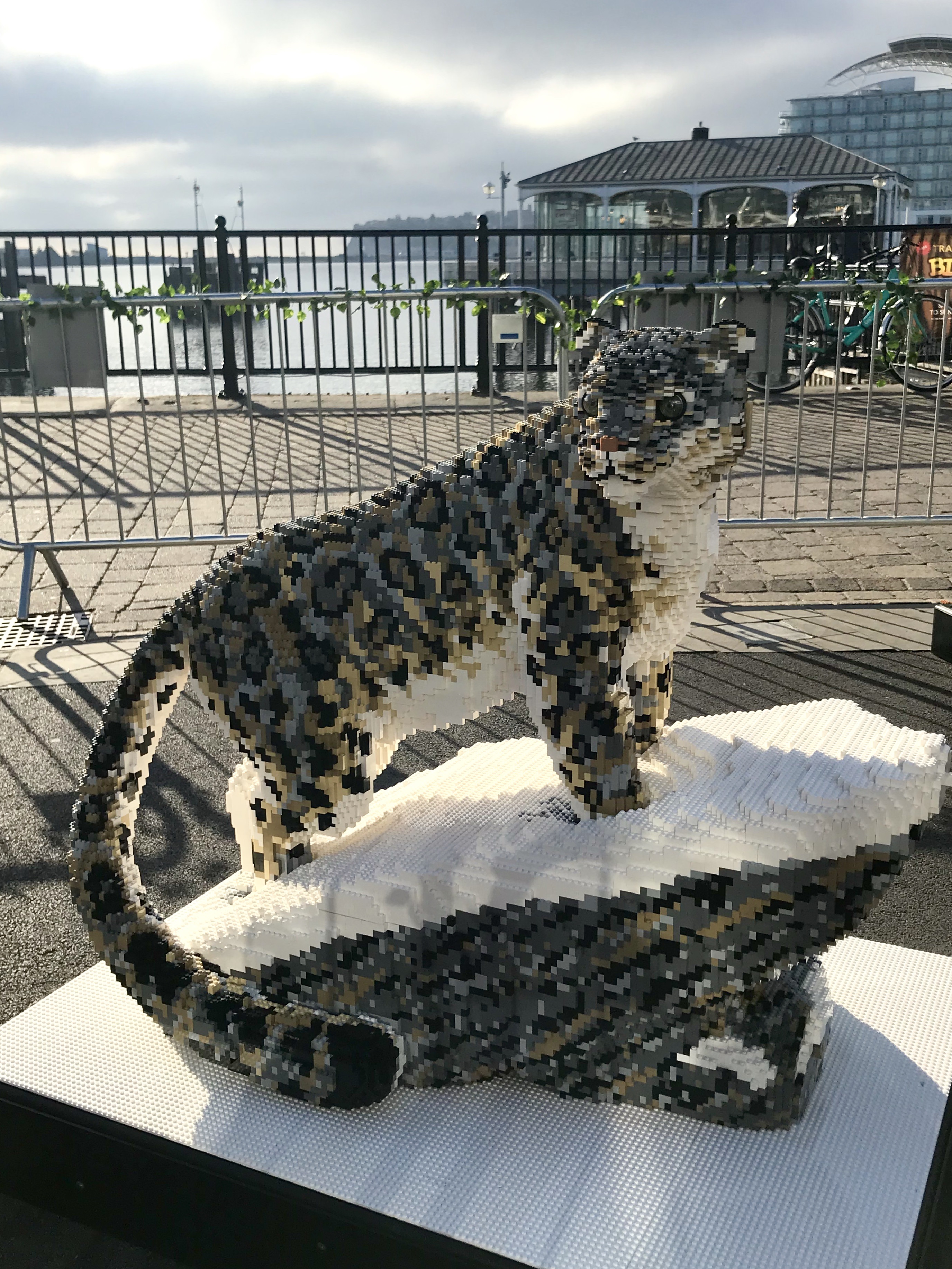 My favourite was Leonora the African leopard, lying on a tree trunk. She’s made of an impressive 102,280 bricks and took four builders 230 hours to create.

My daughter’s favourite was Lesley the Snow Leopard, standing on a snow-covered rock. She’s made of 41,847 bricks and took two builders a total of 116 hours to make.

We also loved Tonya the Bengal tiger. There are fewer than 3,000 Bengal tigers left in the wild. The Lego version took 229 hours to make with two builders using 87000 bricks. 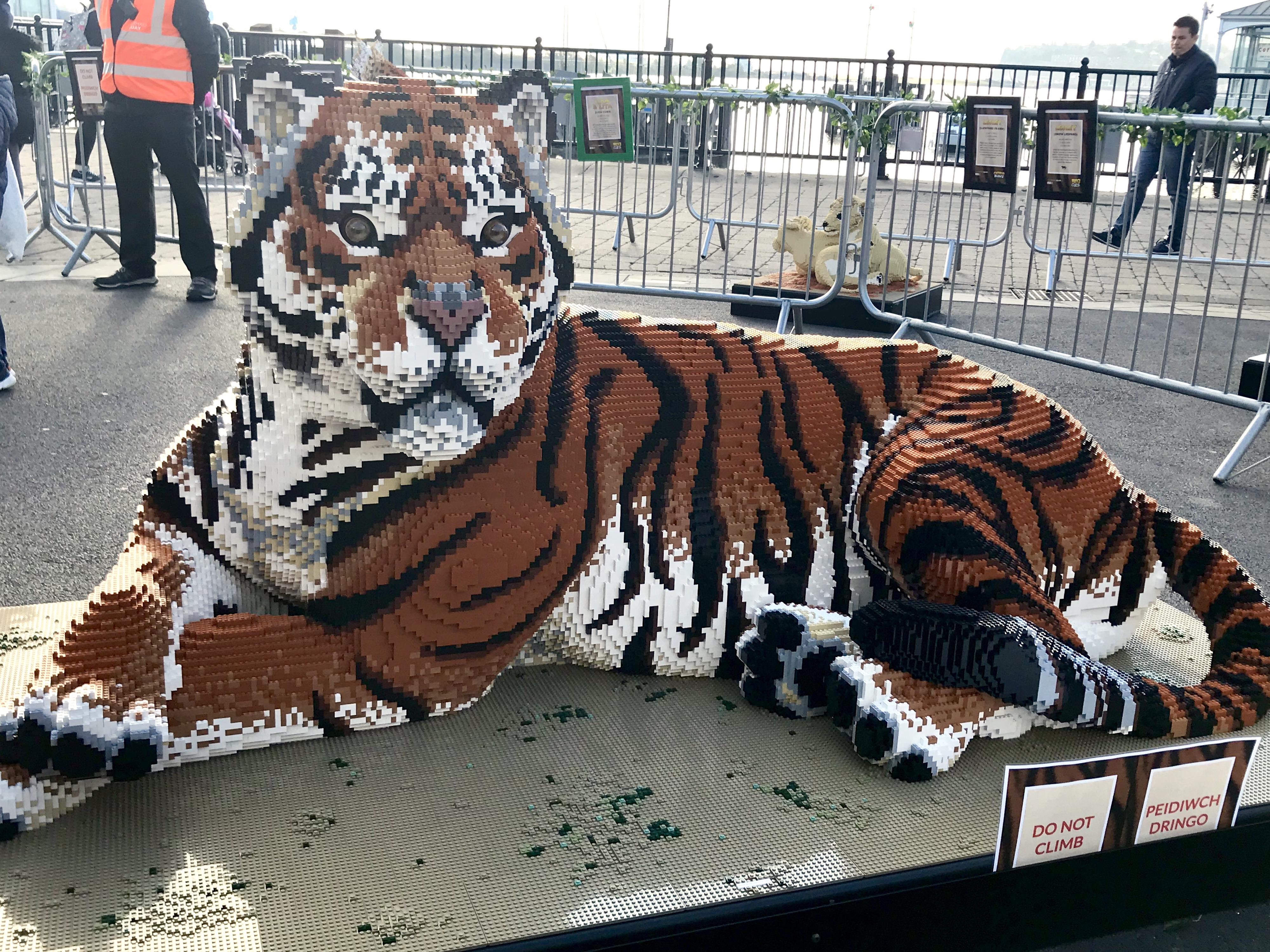 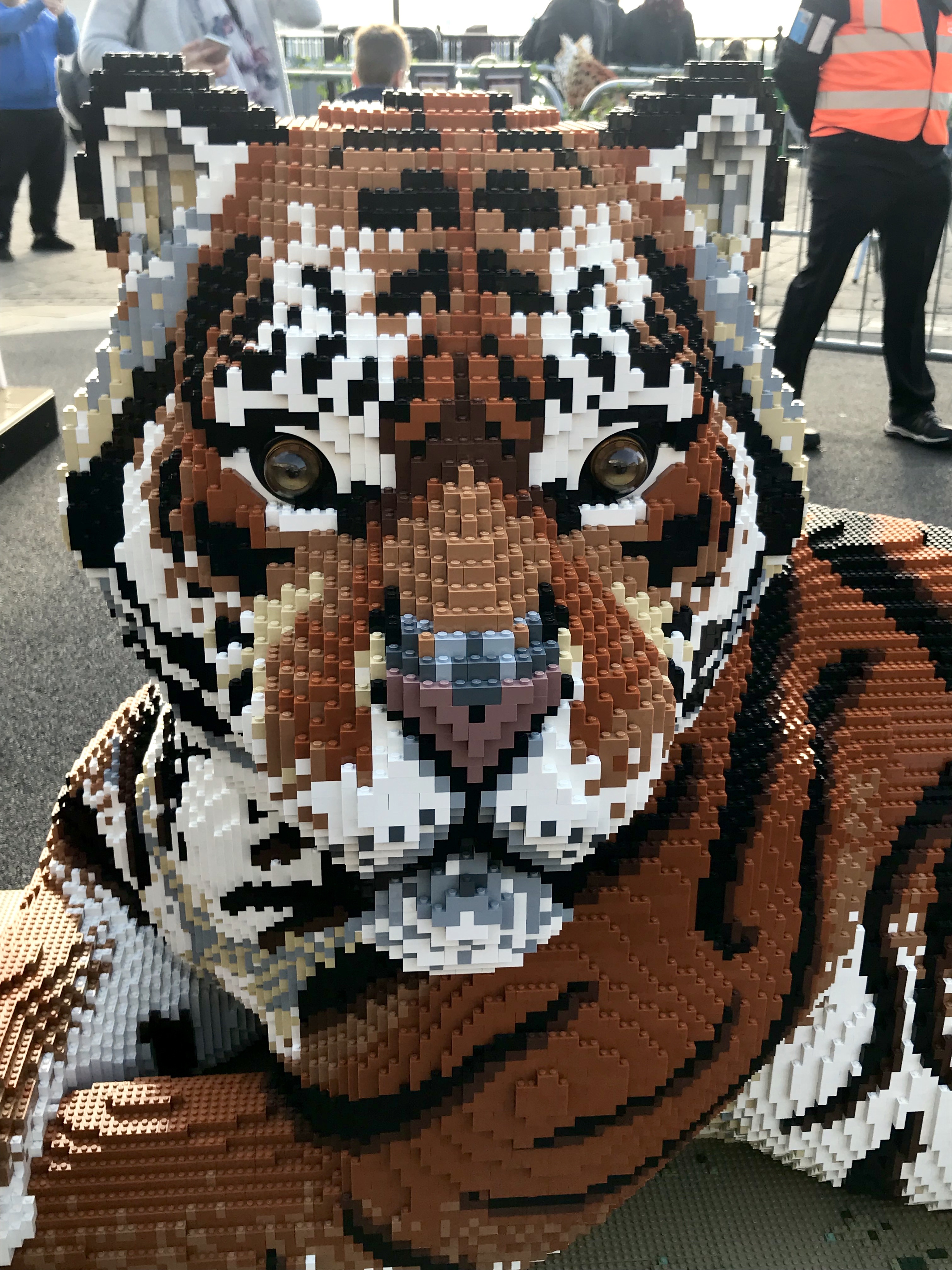 The three tiger cubs Tawny, Tabby and Tammy are in my daughter’s word “so cute”. They took two builders a total of 105 hours to create using 64,198 bricks. “It’s like the three of us,” she said, referring to her and her two brothers.

Chase the cheetah pouncing on his prey Andre the antelope was causing a few sniggers from the grown-ups due to their position. But thankfully my children were oblivious to this. 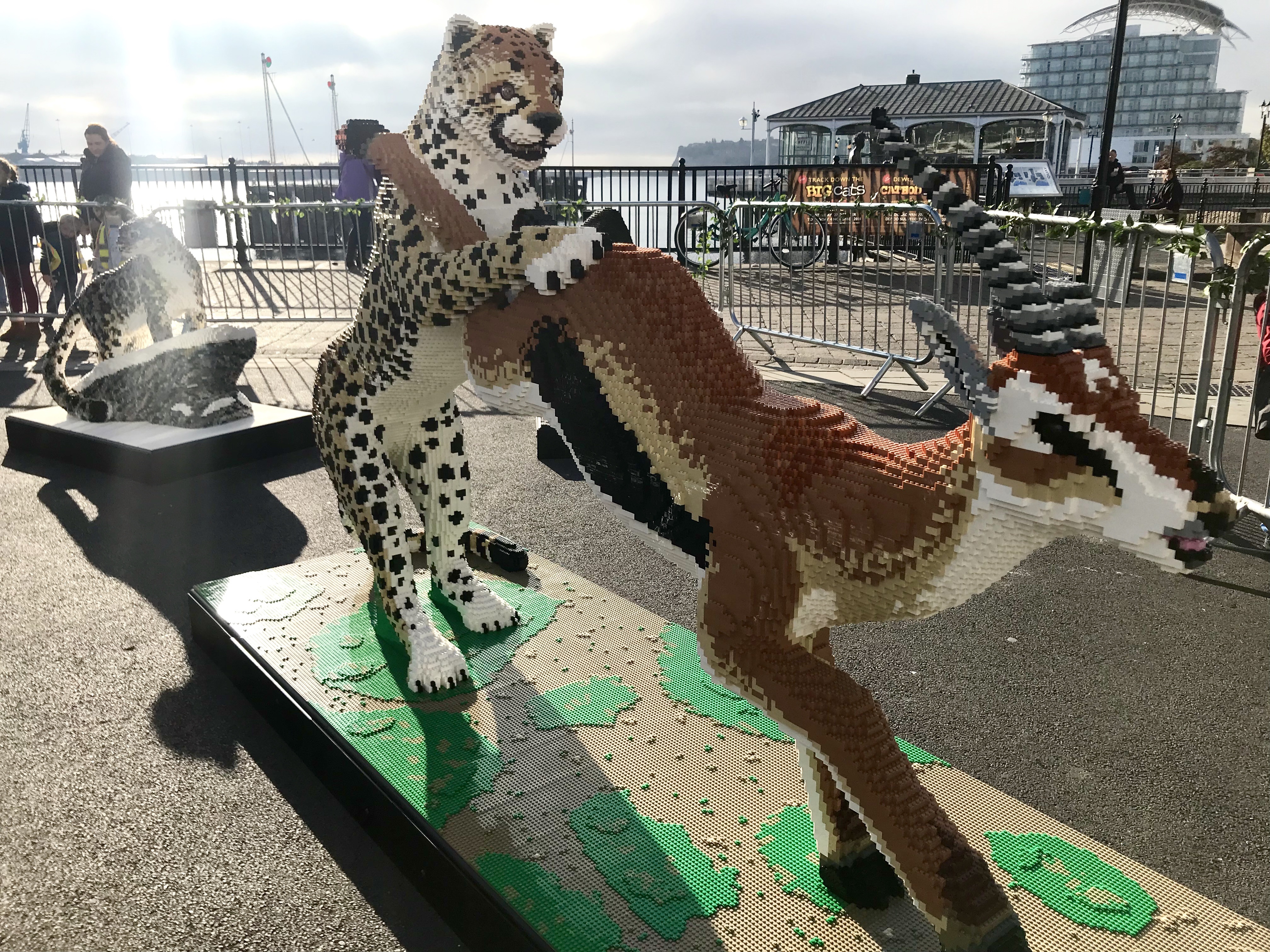 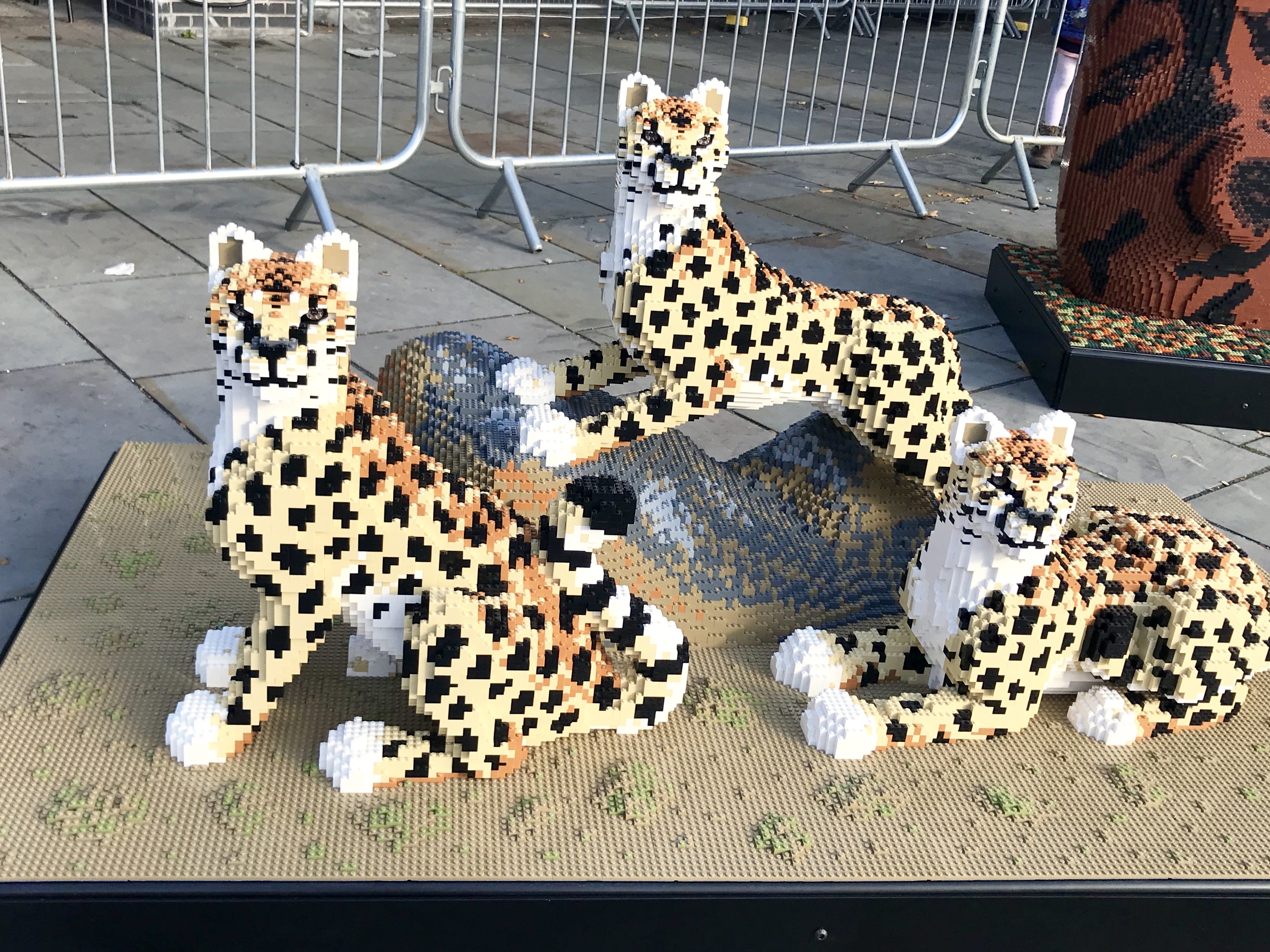 They left the exhibition in awe of the Lego creations they had seen and full of ideas of what they could next create.

And once you’ve seen the Lego Big Cats head across to Wales Millennium Centre where you can see the Lego sculptures of some of Roald Dahl’s most famous child heroes – Charlie, James, George, Sophie and Billy with Matilda arriving on 4 December ahead of the musical arriving in Cardiff. You can read our review of our recent visit here.

Lego Big Cats is at Tacoma Square Mermaid Quay until Sunday 4 November and is free to visit.