Anyone else’s kids obsessed with Sainsbury’s Lego Create the World cards?! Judging by the amount of requests on my Facebook timeline from people trying to complete the collection, I am guessing lots of you would answer a resounding yes to that question.

My children’s school is right near a Sainsbury’s Local so we inevitably got caught up in the craze pretty quickly… as did most of the school. Every morning and afternoon drop off there are kids clutching piles of cards, trying to swap to complete their collection.

We’re trying our hardest to get the set – but it’s not been easy! 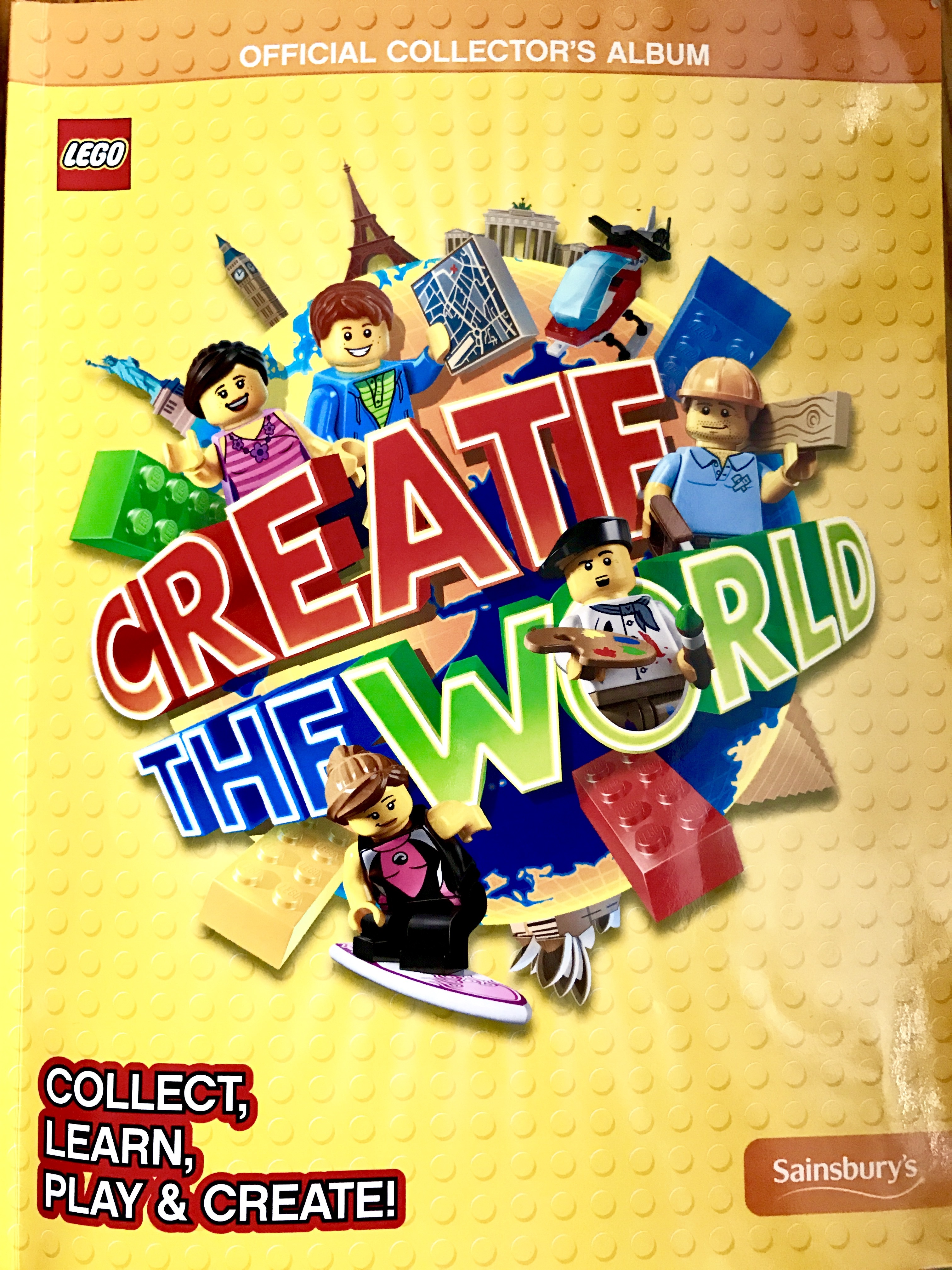 My toddler has been missing the point completely and wants to carry around his favourites, rather than put them in the album. This means I keep losing track of which ones we do and don’t have because he has lost or broken a few along the way. Stickers would be so much easier than cards because once they were stuck down he wouldn’t be able to sneak them out of the book.

Little Miss E, my seven year old daughter, is on a mission to get as many of the mermaid cards as possible and without my knowledge took some that were not doubles in to school to swap for yet more mermaids. I told her that wasn’t in the spirit of the book… but then I find myself questioning whether I am spoiling their fun by wanting to get the book filled.

Little Man O is desperately trying to fill the pages and both of his siblings have left him in tears with the aforementioned antics.

We have so many swapsies but I can never get them all into one pile because my children share them out between the three of them and keep their own little collections in safe places. Every day the eldest two take their doubles to school and and while they do come home with a few new ones, there are also an awful lot of mermaids sneaking their way in too. Seriously, we have about 10! 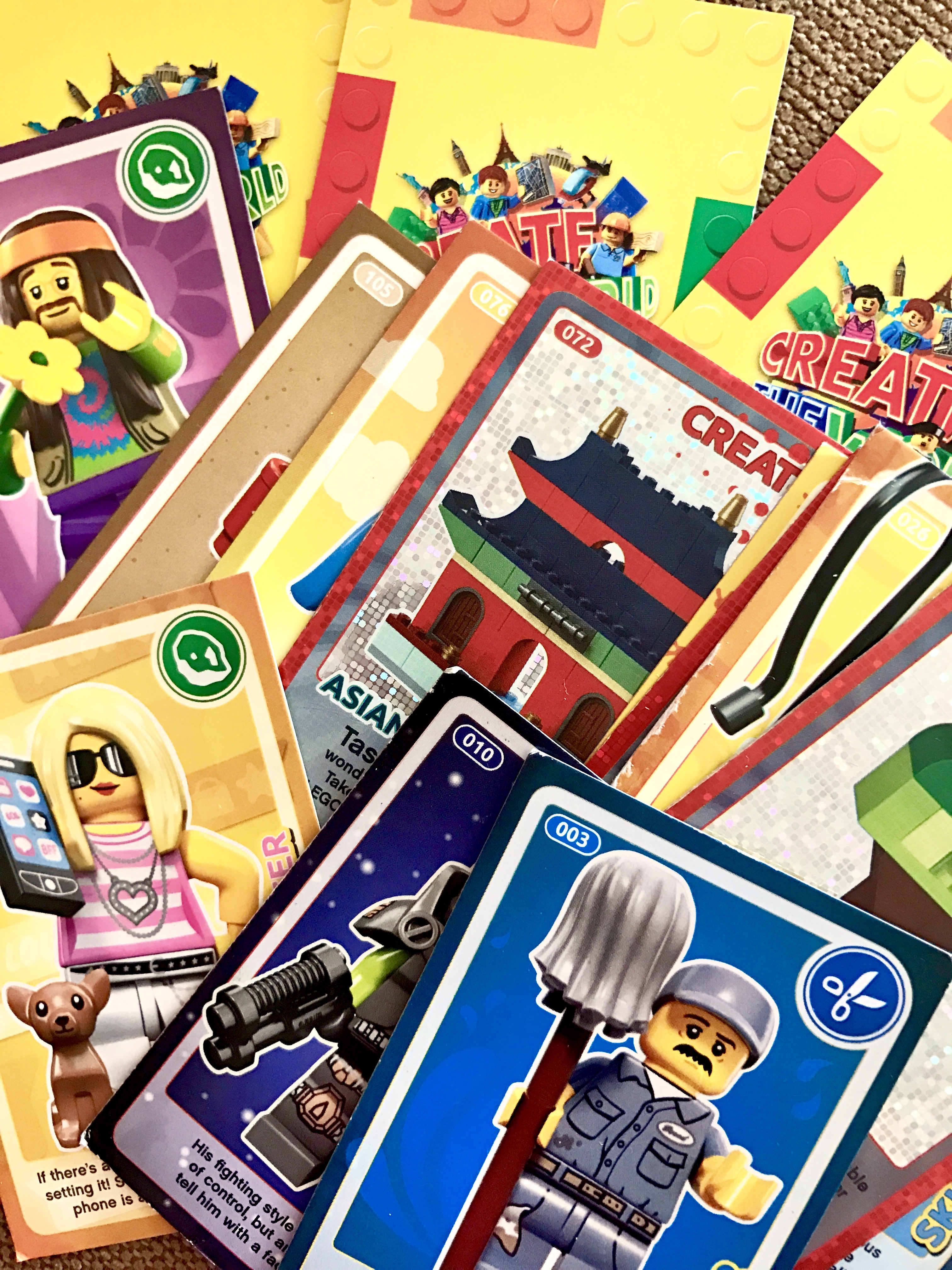 What I really want to do is make a big list of all the doubles we have ready to swap or give away, and the ones we still need, pop them on Facebook and be done with it. But the cards are never in the same place for long enough.

I’m determined to complete the album. I’m still haunted by the missing number 3 sticker in the My Little Pony sticker book I had as a child. I can still see in my mind the front page with a quarter of it missing. My best friend had that very sticker and I was so jealous but no one I knew had a swapsie.

If only we’d had Facebook back then to put out an appeal!

Fair play Sainsbury’s and Lego. You’ve created a real winner here! You’ve got me into the shop more often than usual, diverting my business from cheaper supermarkets to get the ‘free’ cards. It would obviously be more cost effective to do the cheap shop elsewhere and buy a pile of cards separately, but where’s the excitement in that? Among the parents I know, there’s been a real frenzy. It’s Lego and it’s negotiating and numeracy skills… so it’s educational, right?!

Now that Sainsbury’s have stopped giving them away with purchases, my plan over the weekend is to finally make a list of all the ones we need and all the ones we have to swap or giveaway and finish the album.

I really want to glue them all down so we don’t lose any! But I’ve seen The Lego Movie and know that gluing together Lego is a huge no no. Please tell me this doesn’t apply to the cards too? I think I might cry if any go missing when the book is done.

And also please tell me it’ll be a while until the next playground craze! We parents need a rest from trying to help our kids fill these albums before the next must-do thing comes along!

Have your children been collecting the Lego Create The World cards? Do let me know in the comments below, on the Cardiff Mummy Says Facebook page or you can tweet on me on @cardiffmummy