In honour of St David’s Day, I thought I would share my recipe for leek and potato soup. I love soup – I batch-make it regularly, meaning I’ve always got at least three different flavours in the freezer, but leek and potato has to be my all-time favourite.

I’ve been making it for at least 10 years, and over this time I have discovered that for me, the leekier, the better. I use one small potato per leek. Other recipes I’ve seen suggest two per leek, or equal quantities. I also like it to be green, so I buy whole leeks, rather than the trimmed variety, so that I can use the entire leek, including the top leafy part to give it that gorgeous colour. It also means less food waste – and on that subject, I never peel the potatoes either. That’s where all the goodness is. 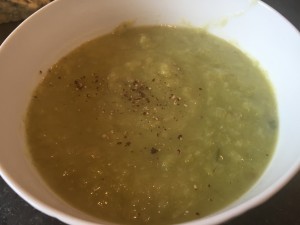 My favourite soup – leek and potato

The recipe is below. Sometimes I add a good dollop of cream, stirred through just before serving. Other times, I chuck in some chunks of Danish Blue or Stilton. Cardiff Daddy sometimes snips up a rasher of cooked bacon and adds that in.

As you can see from this photo, I’ve made a big vat of this to keep us going. The recipe here is for a much more manageable four portions, but the great thing about soup is that quantities don’t really matter – just chuck in whatever you have. 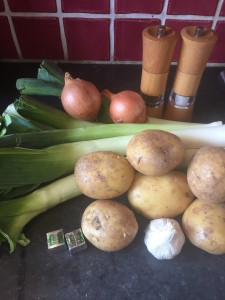 2 leeks, washed, ends trimmed off, and cut into slices 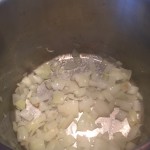 In a large saucepan, heat the oil, add the onions and garlic and cook on a low heat for about five minutes until the onions become soft.

Add the leeks and cook on a low heat for a further 5 minutes until they become soft, stirring regularly and taking care not to let them brown. 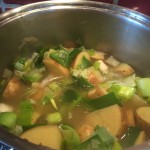 Add the potatoes and give everything a good mix.

Add the stock, bring to the boil and then simmer for 15-20 minutes until the potatoes are soft. 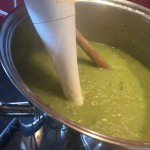 Blitz with a food processor (I have a hand-held one that does the job perfectly) to your desired consistency. You may wish to add some more boiled water if it’s too thick.

Season with salt and pepper to taste.

If you’re batch-cooking and want to freeze portions, the latest Department of Food advice is here.

You can view all my tried and tested family recipes here.