My youngest child, Toddler Boy I, absolutely loves a certain climbing frame and slide in one of our local soft plays. The minute we walk through the door, he makes a beeline for it, yelping with excitement as he climbs up the steps, crawls across the platform at the top and whooshes down one of the two brightly coloured plastic slides.

He’s not quite two yet but he’ll go down head first, on his belly, backwards…. he has no fear! I’m always sat or stood close by, ready to help if he gets stuck or needs me, watching as closely as I can.

Occasionally, in his excitement, he’s tried to jump the queue or has barged past a smaller child. I’ll remind him to slow down, to be gentle, to wait his turn and to look out for other children.

On a recent visit to this soft play, my son got to the top of the climbing frame to find another child, who was no more than three and a half, sat on one of the slides. I ushered him to the empty slide – and the child leaned over and pushed him. Quite forcefully.

I was shocked because it was completely unprovoked, but as Toddler seemed fine, I ignored it.

Toddler ran back up the steps, excited to have another go. And the same thing happened. The child, who was still sitting at the top of the slide, deliberately leaned over and pushed my child.

Again, I was shocked. I asked Toddler if he was okay, but I ignored the child, thinking a parent or grandparent would soon be along to deal with the situation. I look around to see if I could locate the child’s parent. Maybe the child’s mum is sat in a corner breastfeeding a baby, I thought to myself, or playing with a sibling in another area of the soft play. It was a term-time morning, and it wasn’t very busy, so I’m sure the parent can see the situation, I thought to myself.

But then it happened a third time. And then it happened to two other children who had joined us on the slide. I caught the eye of another mum whose child also got shoved and she looked as horrified as I felt.

I kept thinking the child’s parent would be along to deal with the situation, as it had been going on a good few minutes and I was sure they must have clocked the situation by now. But no one came and, despite it not being very busy, I couldn’t work out who the child was with.

The next time the child did it, I told them off. I didn’t shout, or say anything horrible to them. I just said calmly but firmly, “Let’s be gentle towards each other on the slide as other children don’t like to be pushed.” The child looked at me like I was stupid… and shoved one of the kids behind them in the queue. “Be gentle,” I said again, a lot more firmly this time… and picked up Toddler and took him somewhere else to play.

It’s been on my mind ever since. Did I do the right thing in telling off someone else’s child? Would another parent be angry to think I’d had words with their child? If a child is deliberately and continually hurting other children, it needs addressing, right?

I tried to keep what I said as gentle and non-confrontational as I could – I would certainly have been way firmer with my own children.

But I didn’t know this child.

I didn’t know whether they had any medical conditions that could cause them to behave in this way. I didn’t know what kind of household they were growing up in. Whether there was violence in the home or any other issues that might impact their behaviour. I didn’t know if this was regular behaviour and the parent was at their wit’s end trying to deal with it, or whether it was a new and out of character thing from an otherwise peaceful child, which is why the parent wasn’t paying as close attention as they should have been. I didn’t know if perhaps the child’s parent just didn’t care.

I didn’t intervene straight away – because I was waiting for a parent or carer to come along and deal with it in their own way. We all have different parenting styles and I would never intervene unnecessarily. I tried to stay non-judgemental and give this child’s parent the benefit of the doubt. But no one came – despite this slide being very visible in the centre of the soft play area.

However, as it continued, it made me really angry and sad that my inaction was tantamount to condoning this behaviour. I also didn’t want my child to think that him being shoved and pushed was okay. Because by ignoring it, that’s exactly what I was suggesting.

And that’s why I had to say something. Because it wasn’t okay.

I have three children aged 6, 4.5 and almost 2. I’m not naïve – pushes and shoves are a daily part of life as children seek to assert their independence and authority, and express frustrations they can’t quite verbalise.

I deal with it the best I can.  I don’t always jump in straight away, because I like to see if the children can resolve the situation themselves, especially my oldest two. But I’ll always tell them if behaviour is inappropriate, encourage them to think how the other child would have felt and suggest they apologise. I remind them to be kind to each other and issue consequences where appropriate.

It’s mortifying when your child is the one doing the pushing or shoving of another child – especially if you’re on the other side of the room feeding your baby or whatever and can’t quite get there as quickly as you’d like to intervene.

But we all know it happens. Kids will be kids. It’s how it’s dealt with that is the real issue; whether or not children are told such behaviour is not acceptable. In most instances, if another child has hurt my child and the parent has addressed it, I always make a point of telling the parent that it’s okay, we’ve all been there, not to worry about it, it happens. Like I said, I know what it’s like to be on the other side.

If another adult jumped in and told off my child when I was standing there and before I’d had the chance to deal with it myself, I would be annoyed. But if my children are in the care of another adult – at school, pre-school or with family members or friends – I would expect the adult in charge in my absence to address misbehaviour in a fair and appropriate way. I want my children to respect authority and to understand the consequences of their behaviour.

I don’t blame this child for pushing my child. But what makes me sad is that no one was there to help the child realise they needed to change their behaviour.

And that’s why I stepped in, although I’ve been going round in circles ever since wondering if it was the right thing to do.

What do you think? What would you have done in this situation? Was I right to say something to a child that wasn’t mine? How do you feel about telling off other people’s children? Or how would you feel if someone told off your child? I’d love to know your thoughts either in the comments below, on the Cardiff Mummy Says Facebook page or you can tweet me on @cardiffmummy 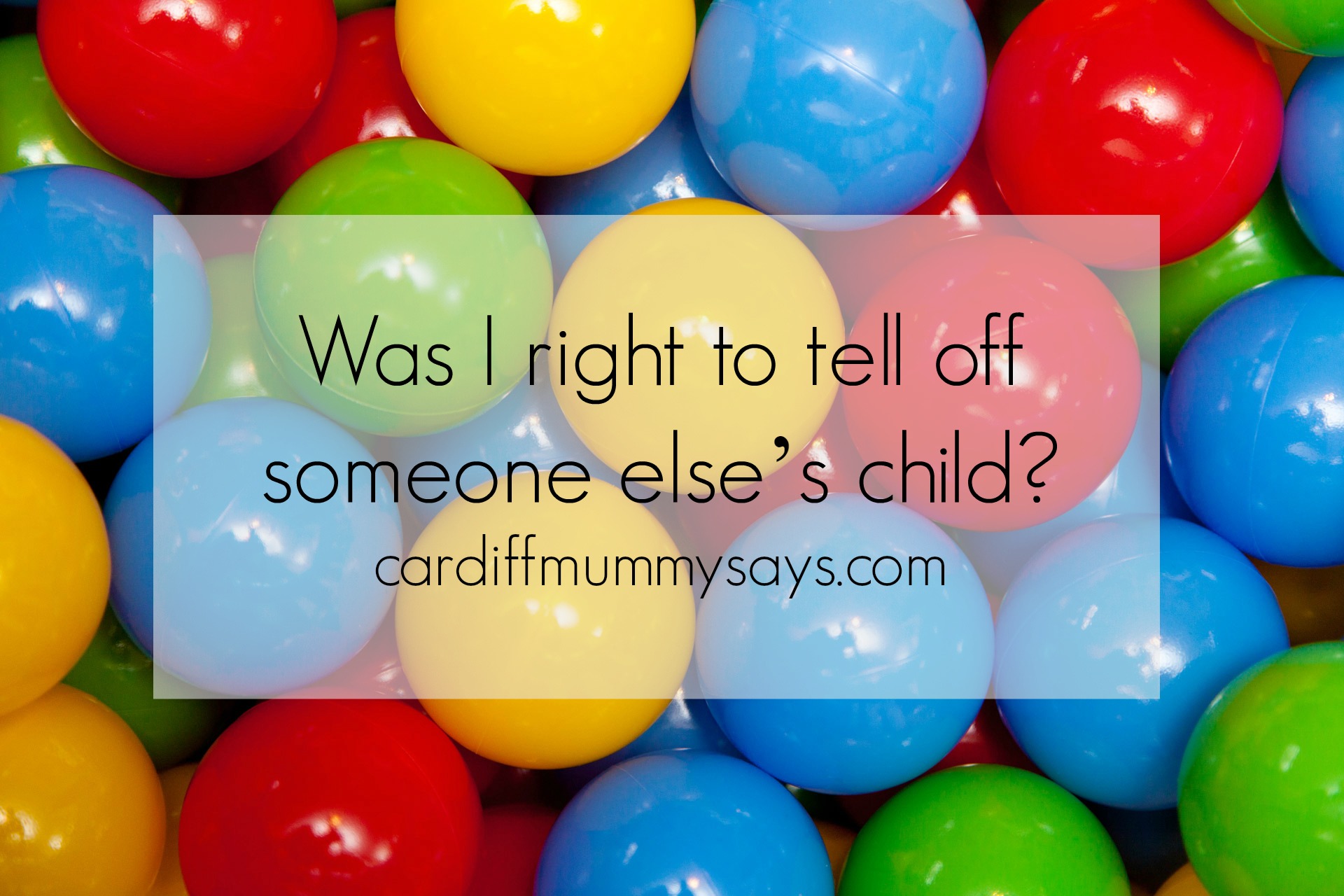 Homepage » Family life » Was I right to tell off someone else’s child?

12 Comments to Was I right to tell off someone else’s child?