Nestled in the Swansea Valley, Wales Ape and Monkey Sanctuary is exactly what its name suggests. It’s a home for primates who have been neglected, mistreated, abandoned, or who have had trouble fitting in at zoos or wildlife parks. We visited a few days ago and despite the animals’ sad stories, it’s a calm, welcoming and inspiring place that’s perfect for a family visit.

The day we went, the sanctuary was nicely busy but not overly so, considering it was a sunny day during the school holidays. It took us about an hour to get to Abercrave from North Cardiff, via the A470 and Heads of the Valleys road, and was quite an easy journey with the help of sat nav. It’s more of a half day out than a whole day, but you could combine it with a trip to Dan yr Ogof Show Caves or Aberdulais Tinworks and Waterfall. 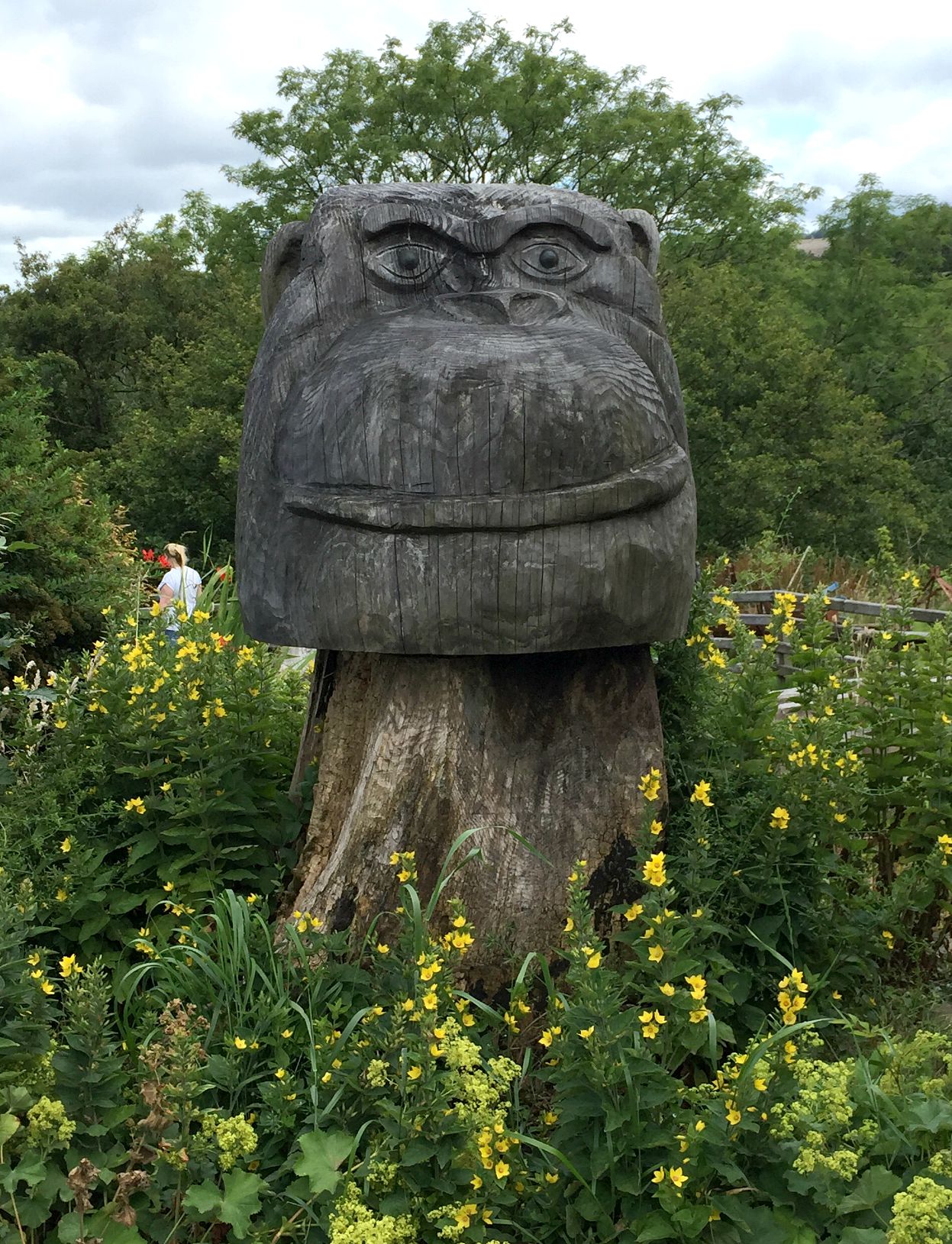 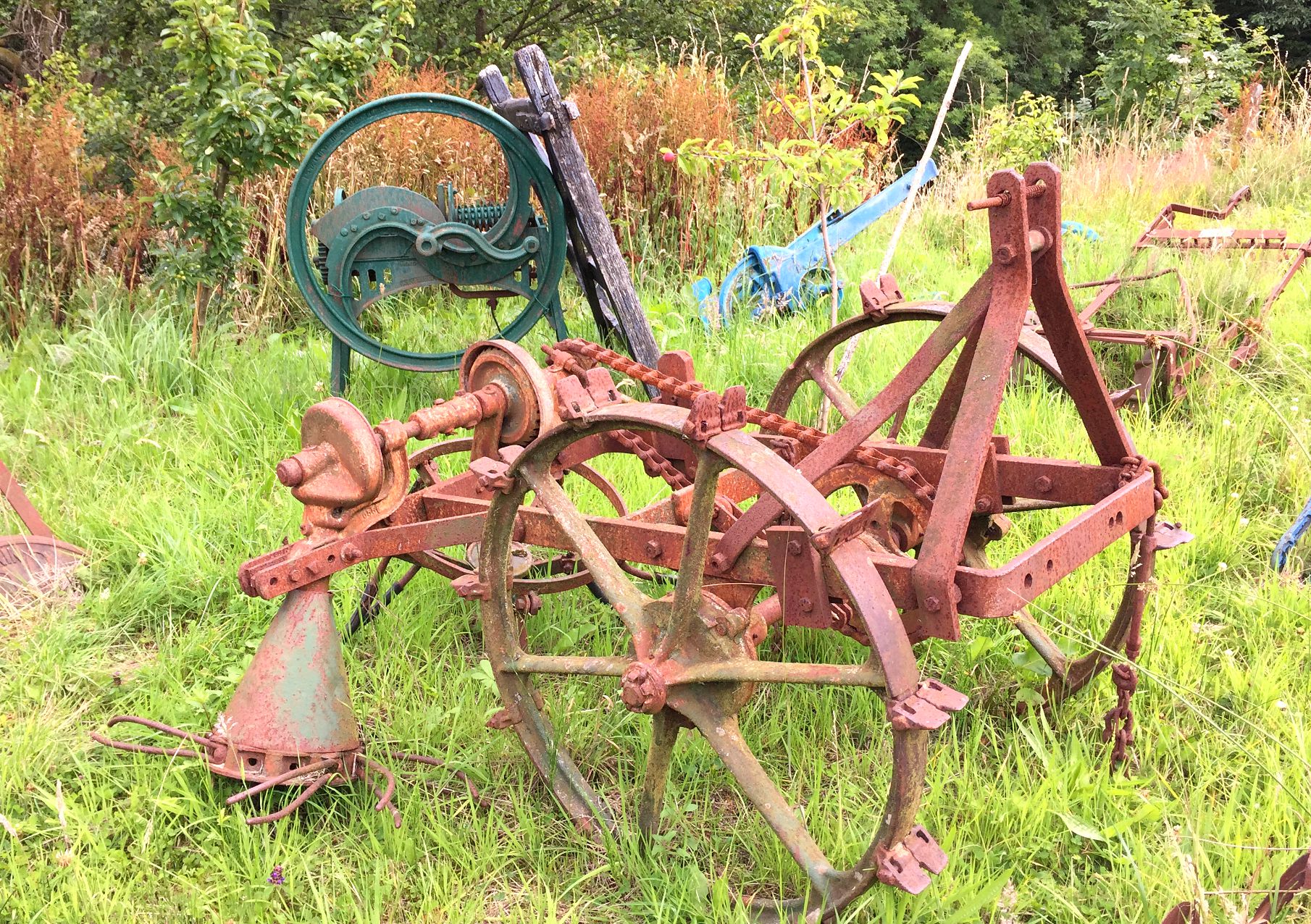 The place is definitely a little rough around the edges, with brambles and weeds aplenty in some of the enclosures. But you have to remember the primary purpose of the place is as a sanctuary for the monkeys. Entrance fees from visitors supports that work, as well as sponsorship from local companies. We had no problem getting around with a buggy, and there were a number of picnic tables too.

Formerly known as Cefn-Yr-Erw, the sanctuary is run by Jan and Grahame Garen. Jan inherited the Welsh hill farm from her family and introduced animals there, in order to attract visitors and secure the farm’s future. However, when Penscynor Wildlife Park closed in 1998, Jan and Graham went to see which of the unwanted animals they could give a home to. They were particularly distressed by the chimpanzees, some of whom were suffering psychological problems. No other zoos wanted them – and they were to be shot. The couple visited and fed the seven chimps every day – and slowly began to see the animals’ demeanour change, from nervous hostility to genuine affection. You can read more about how the chimps came to the sanctuary here. 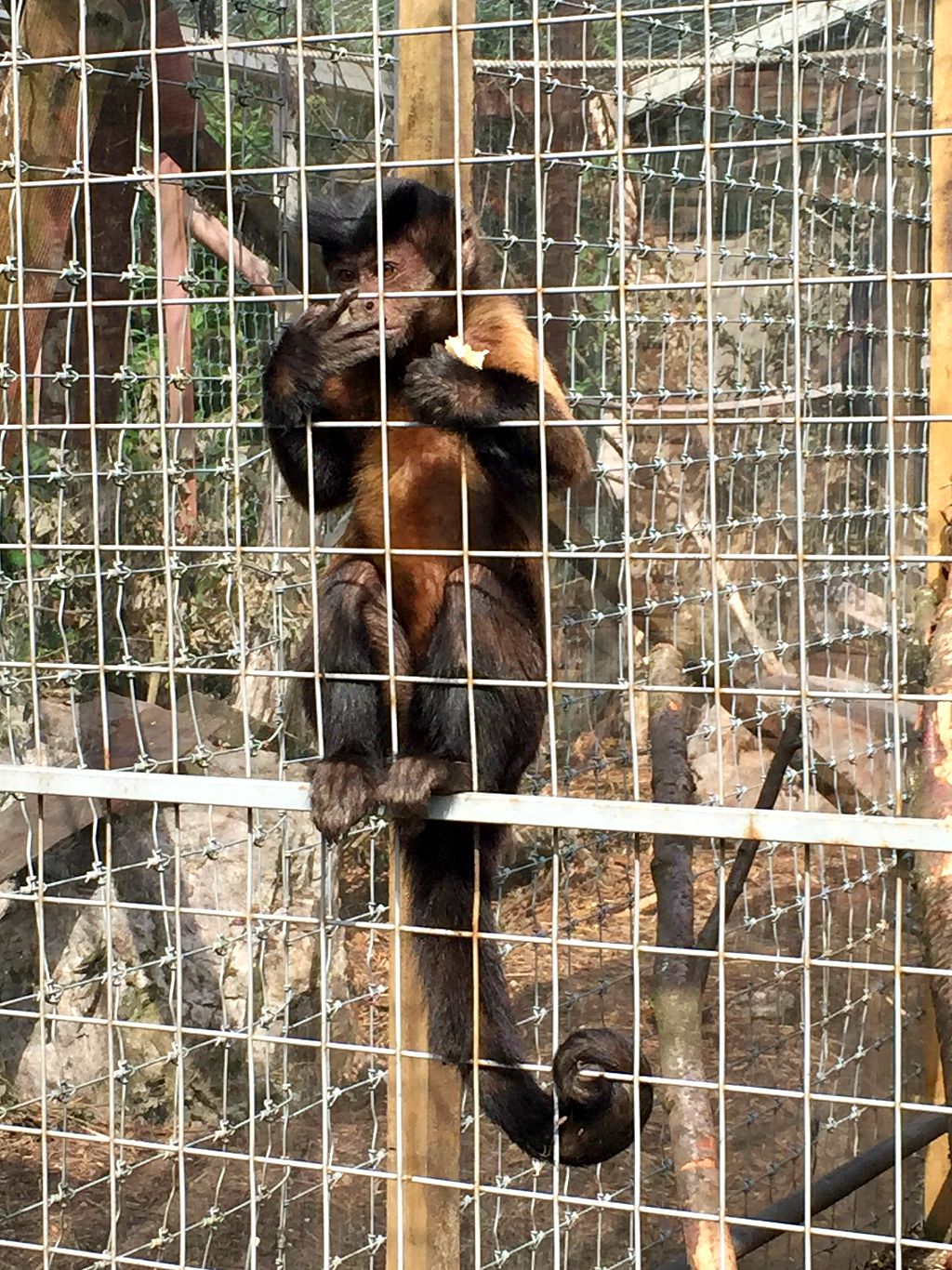 Since then, they have welcomed dozens more monkeys and apes, including baboons, capuchins and marmosets. Next to each cage is a poster-board explaining the animal’s history and how it ended up at the sanctuary. Some of the stories are heartbreaking, but all end happily.

Titch, for example, is a male mandrill who came to the sanctuary in June 2013. As a youngster, he struggled to bond with his fellow primates, was branded a troublesome animal and sent from zoo to zoo – all of whom were unable to care for him. His unsettled lifestyle lead him self-destructive behaviour, such as pulling the hair from his body and biting his hands and legs. He was due to be destroyed – until the sanctuary stepped in. He arrived underweight and scarred from the self-harming – but now his appetite has improved so much he eats almost anything he is given, and the self-harming has stopped.

Some of the animals’ stories are of adventure and incredible survival instinct. Meeko the racoon somehow boarded a cargo container headed by ship from the USA to Canada and then on to the UK. She survived by licking the condensation off the walls of her container and eating cardboard. She was only discovered when the cargo arrived in Ebbw Vale and as racoons are considered pests in the USA, she would have been destroyed if the sanctuary hadn’t rescued her. She’s since been joined by Cyril, who was used as a prop for children’s parties and fed an unhealthy diet of fast food and takeaways. 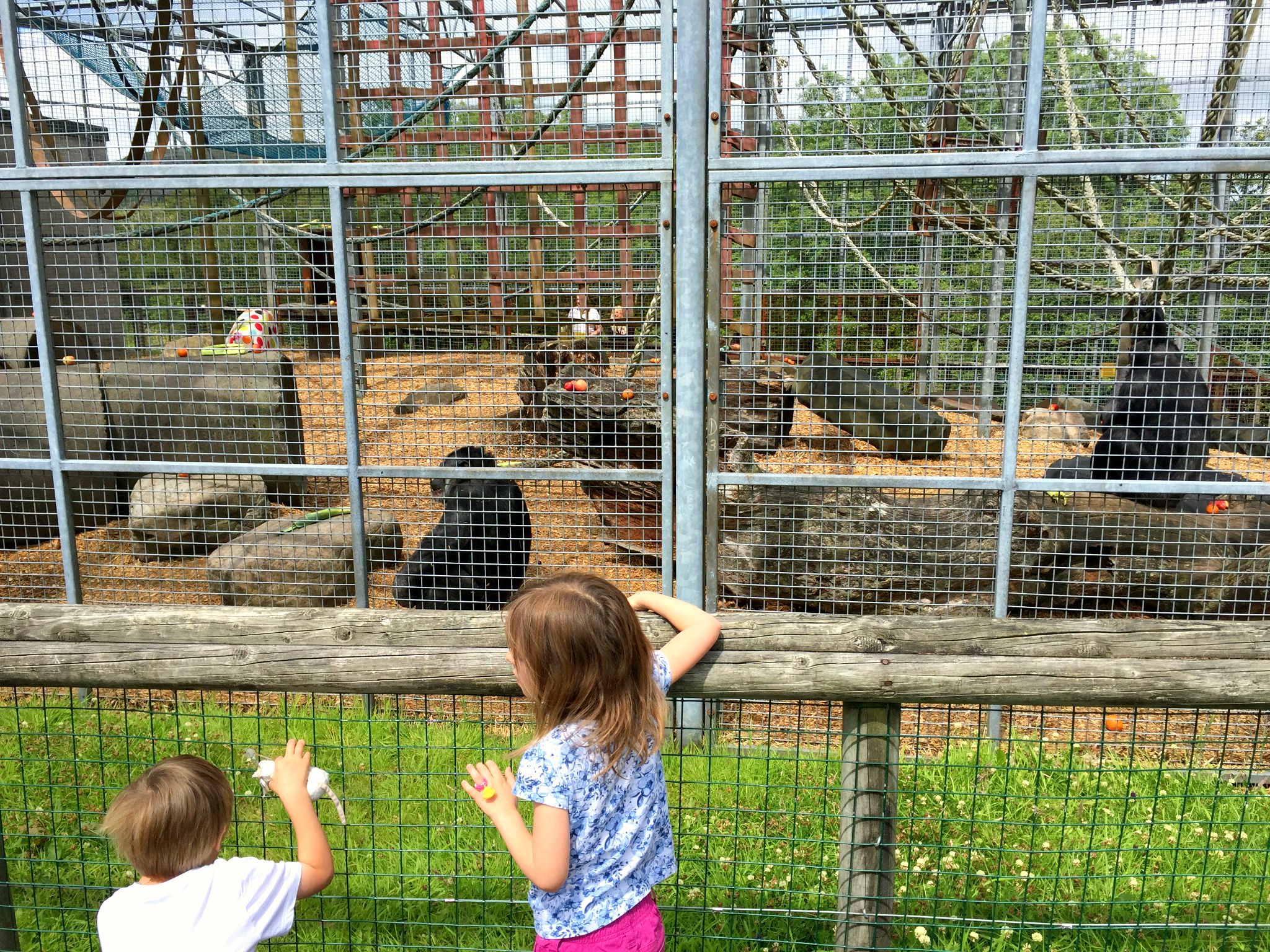 The chimpanzees were by far my children’s favourite though. They’d just been given their food when we got to them and we watched them for ages eating their fruit and vegetables. Little Man O, my 3.5 year old son, was excited that two of the chimps were eating cherries, as that’s his new favourite fruit. He loved that one chimp was carefully using his fingers to take the cherries out of the plastic box one at a time, whereas another was shoving his mouth straight into the box and guzzling them as quickly as he could. 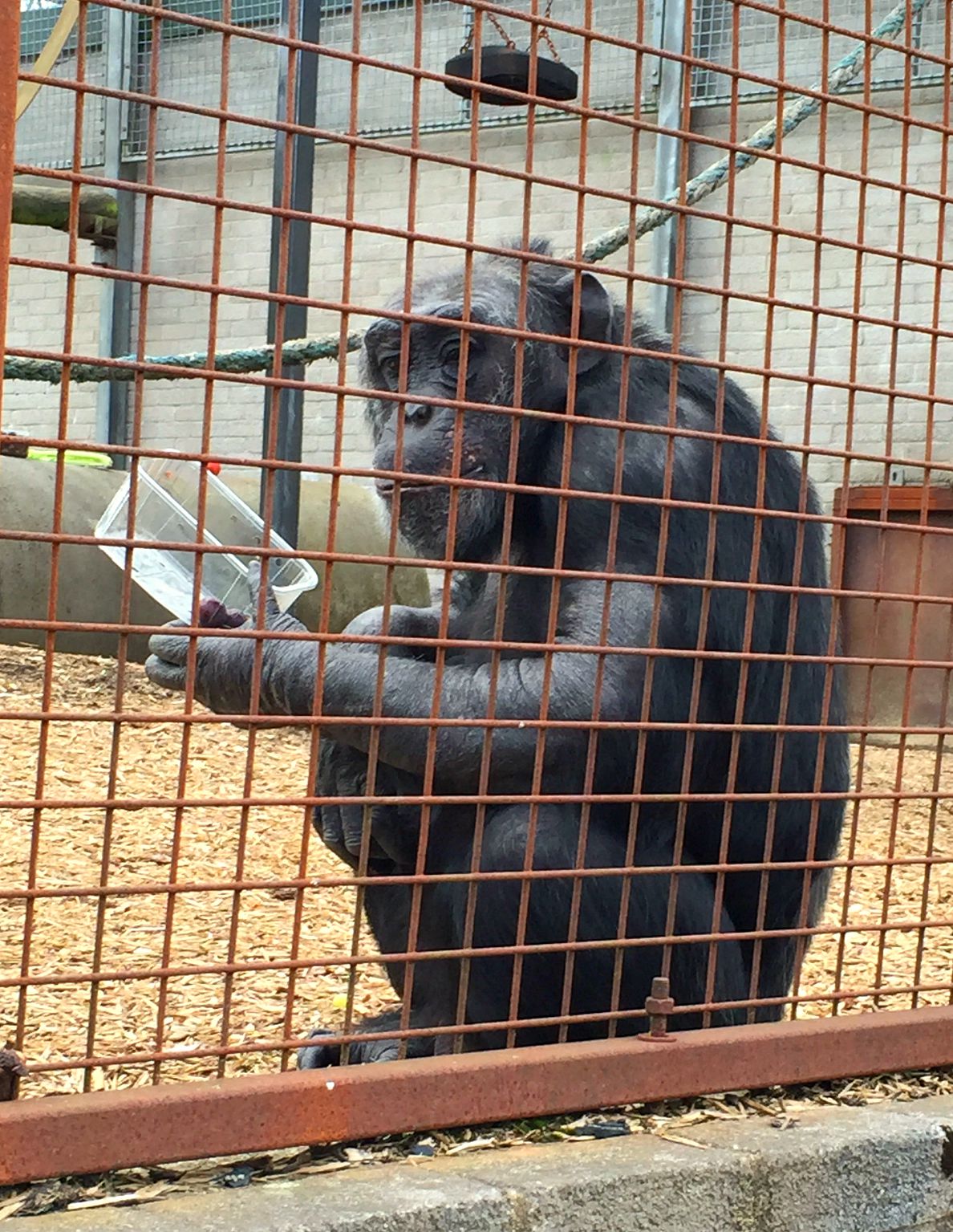 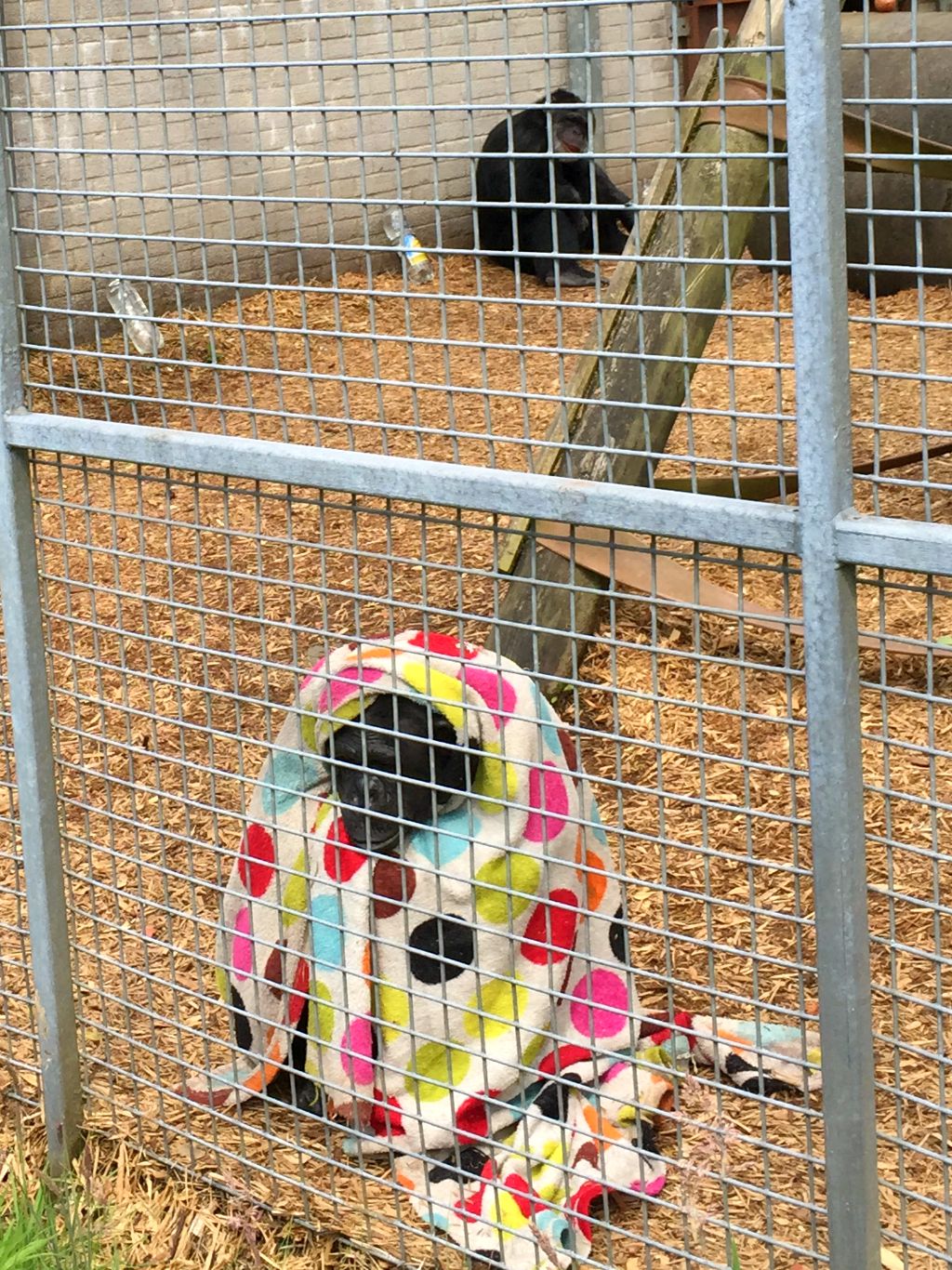 Little Miss E, my 5.5 year old daughter, loved Nakima, a female chimpanzee who spent the entire time with a spotted blanket draped around her. Apparently she is a bit of a drama queen and likes the limelight and wearing blankets as cloaks.

I could have watched the chimps for hours. The way they interact with each other and their individual personalities shine through is amazing.

Our final stop was a quick visit to the gift shop (situated in the old farm house, where you also pay when you arrive) where we bought a magnet of one of the chimpanzees as a present for Cardiff Daddy who was at work that day. There are also shelves filled with second-hand toys, books and other nick-nacks – an on-site charity shop raising money to help the animals.

I first visited the sanctuary with Cardiff Daddy several years ago, way before we had children, so it was nice to go back with my own little monkeys. It’s a great place for a day out – and best of all, you know your money will be helping to care for animals who otherwise would have nowhere else to go.

Have you been to Wales Ape and Monkey Sanctuary? I’d love to know what you thought in the comments below, on the Cardiff Mummy Says Facebook page or you can tweet me on @cardiffmummy

For more ideas on local days out, visit the Cardiff section of my blog.

* We paid for our entrance in full, and Wales Ape and Monkey Sanctuary did not know we would be writing about them.

Homepage » Cardiff » A day out to Wales Ape and Monkey Sanctuary, Swansea Valley

4 Comments to A day out to Wales Ape and Monkey Sanctuary, Swansea Valley