We headed to Tintern over the weekend for a family break. The village, which sits on the west bank of the River Wye just north of Chepstow, is beautifully quaint. Most famous for its abbey, we loved the friendly atmosphere and slow pace of life here – all helped by some lovely sunshine on the Saturday and no rain the whole time we were there.

Our home for the weekend was Tintern Abbey Cottage, just opposite the abbey. Dating back to the 18th century, the cottage was a wreck when originally bought by its owners Fiona and Malcolm Wilton back in the 1990s. A photo album in the living room details their renovation, as they transformed it from crumbling and mould-ridden neglect into the five-star holiday rental it is today. 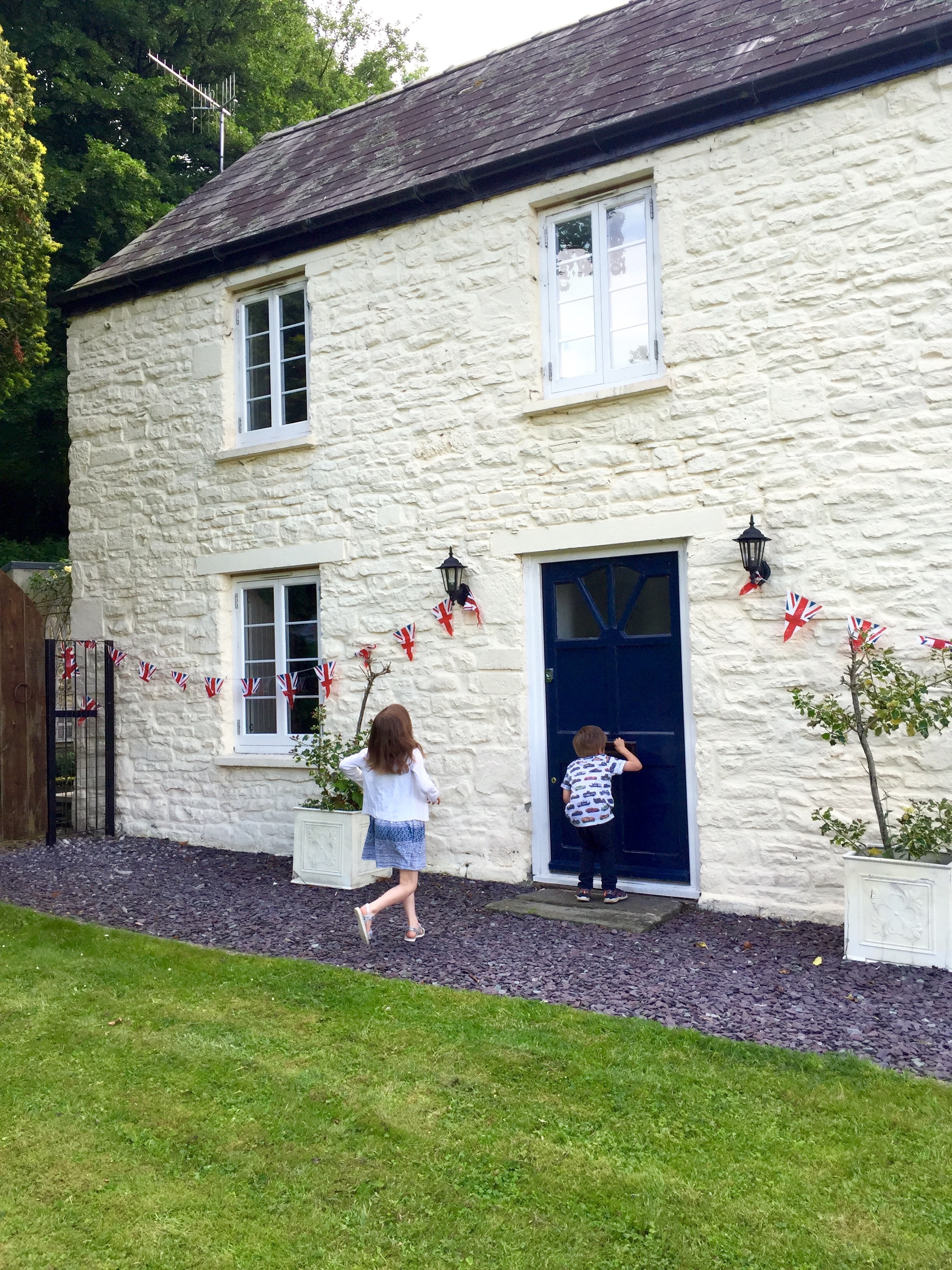 All modern conveniences are present (the whirlpool bath was a big hit with my three children, as were the wall-mounted televisions in each of the three double bedrooms) but they have managed to include plenty of village charm, with a rustic feel to the décor, such as the floral bedspreads, and duck-egg blue kitchen complete with Rangemaster oven. 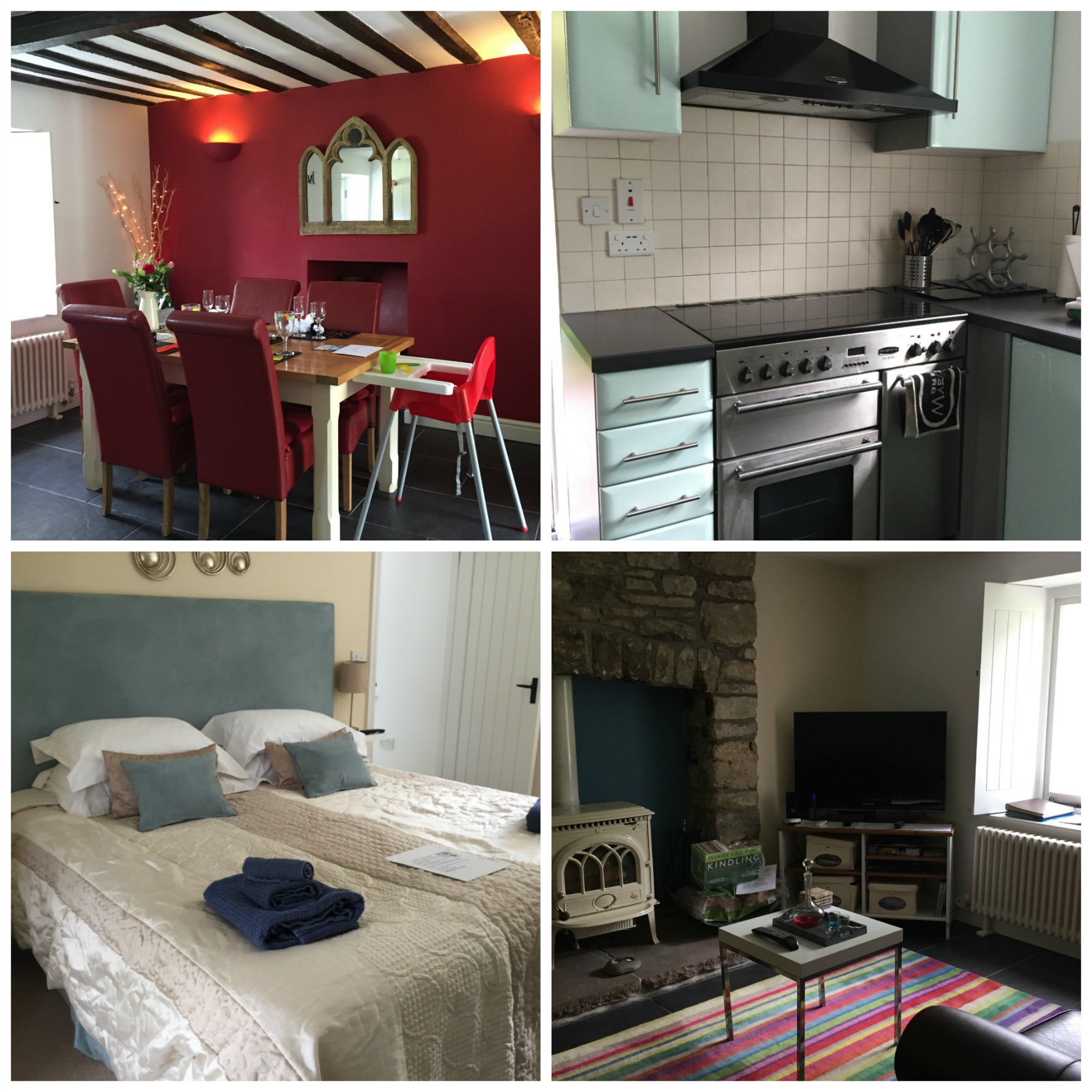 There’s also subtle tributes to the location, such as the mirror over the dining table shaped like the front of the abbey. I was pleased to see so many child-friendly features, such as a travel cot, stair gate, high chair, plastic cutlery and crockery and a selection of children’s DVDs. It makes it so much easier when you don’t have to transport all of this with you.

Tintern is a great base from which to explore the Wye Valley and Forest of Dean– and I’ll be posting more about some of the trips we took over the weekend over the next few days.

But it’s also lovely just to enjoy Tintern itself. We had a few hours exploring the village and also Tintern Abbey, as part of our role as Cadw blogger ambassadors. 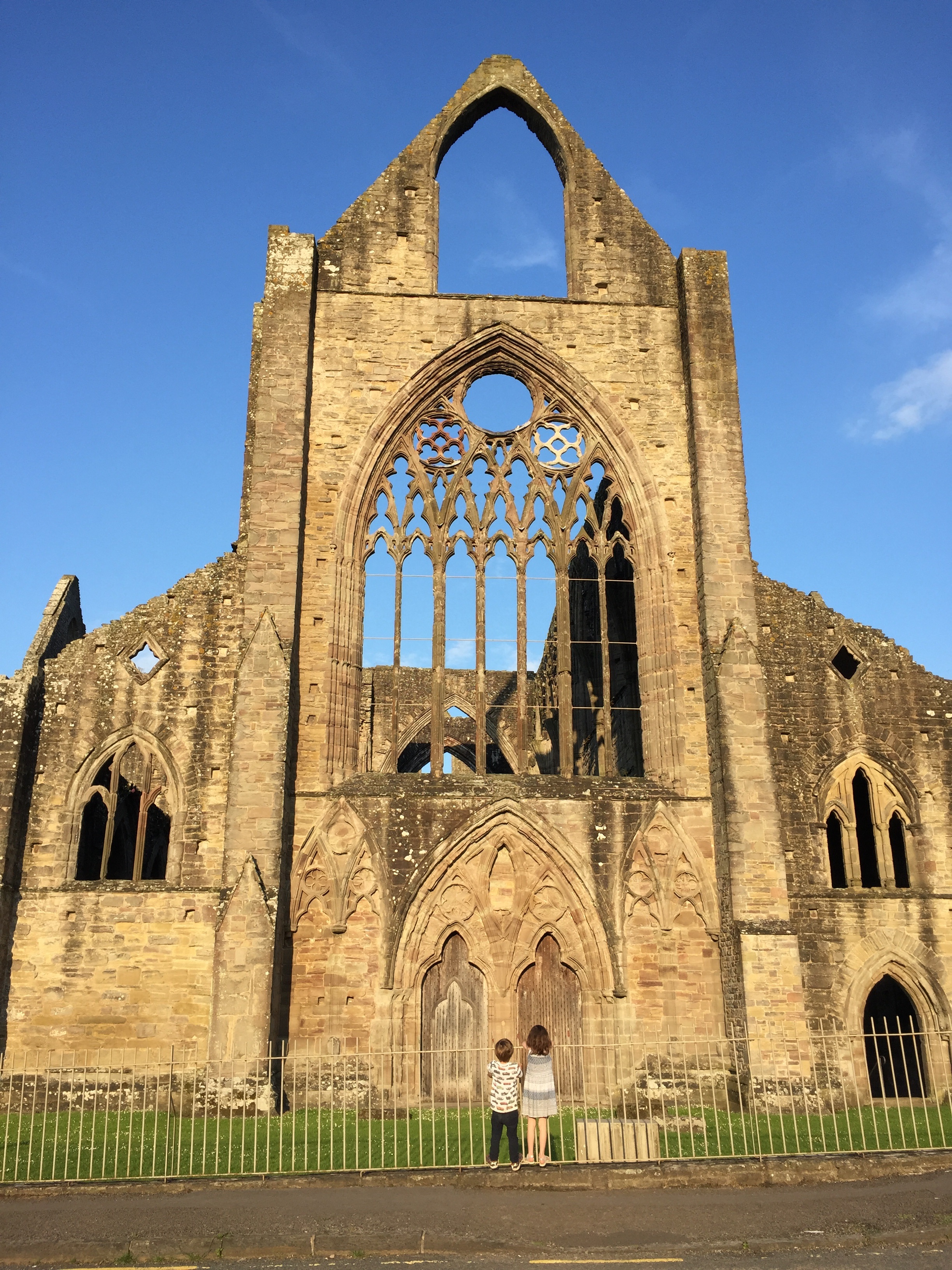 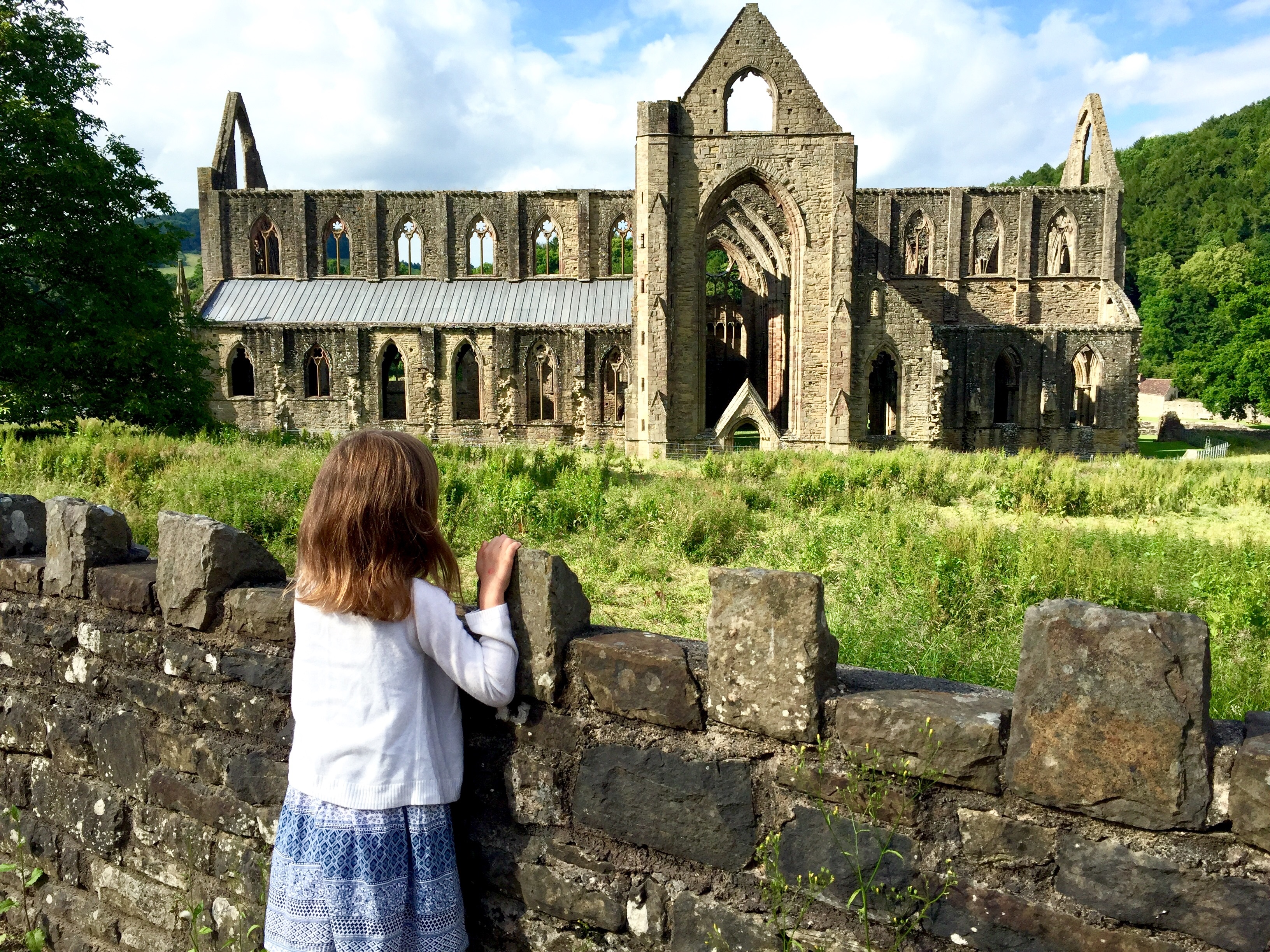 Dating back to 1131, Tintern Abbey was the second Cistercian foundation in Britain. The remains are a mixture of building works which cover a 400-year period between 1131 and 1536. At its prime, it was home to more than 400 monks, who lived there until Henry VIII’s Dissolution of the Monasteries Act of 1536, where the abbey fell into decay. 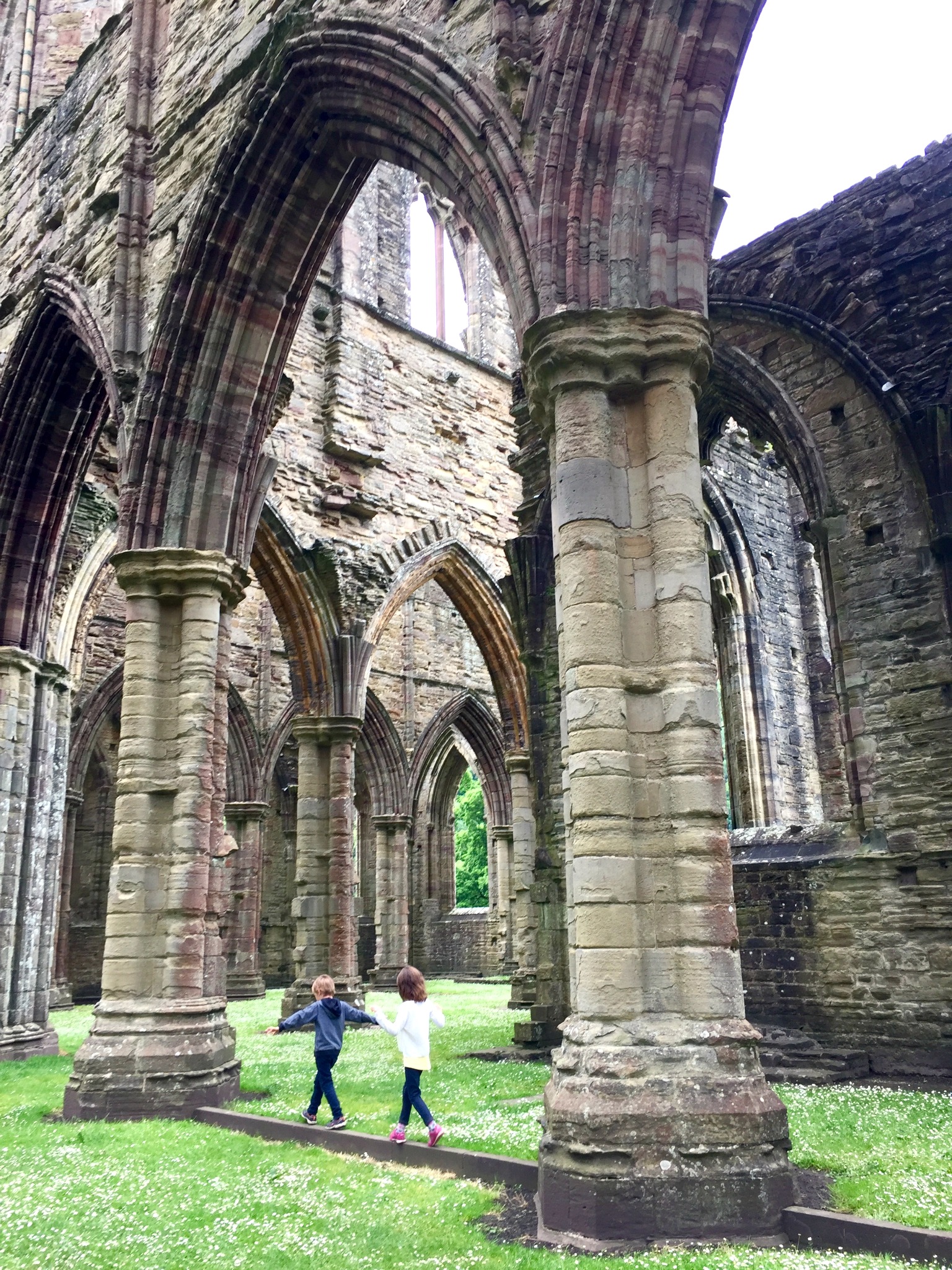 During the 17th and 18th centuries, the ruins became home to workers from the local wire works, but it wasn’t until later in the 18th century, when it became popular to visit more rustic and unkempt areas of the country, that the surge of visitors to the abbey and the Wye Valley meant people began to think about is preservation. It featured in many paintings and poems, including the famous Lines Written A Few Miles Above Tintern Abbey by William Wordsworth, from 1798.

The start of the 19th century saw much architectural and archaeological work taking place – in fact, we spotted one sign in the Abbey stating that some of the bricks are different colours and textures because Victorian laws meant restoration work had to be obvious. The restoration continued throughout the 20th century – and then in 1984, Cadw took over responsibility for the site. It received its Grade 1 listed status in 2000. 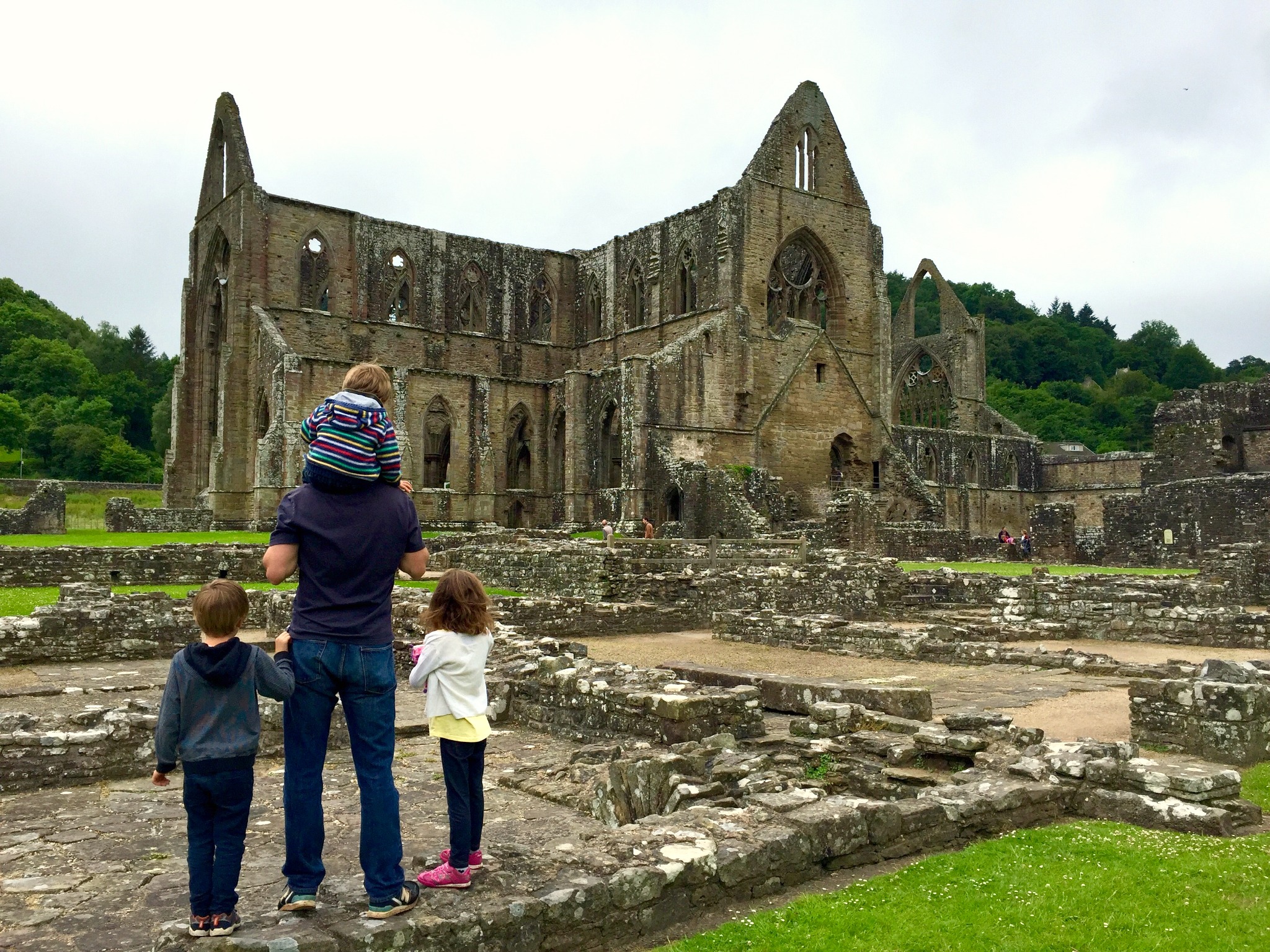 I asked my children how they thought Tintern Abbey was built, in a time before cranes and power tools – and I think they were quite blown away by the idea of its construction. As was I. The sheer scale is quite awe-inspiring.

The staff at Tintern Abbey are in the process of developing a children’s guide to the venue, so we had an advanced preview of this. It broke down the immense history of the place into manageable chunks, directing young visitors from one room to the next, explaining what they would have been used for, and also featuring artists’ impressions of how it would have once looked. One can only imagine the abbey in its prime, with the chants of the monks filling the air.

It was surprisingly accessible for buggies and small children. As I’ve mentioned before, Toddler Boy I is a climber but other than one stone staircase with a big drop  which we steered him away from, he managed fine. There are plenty of picnic tables if you bring your own lunch with you, but we treated ourselves and stopped by The White Monk tearooms next door for a bite to eat. With an outdoor seating area filled with plants and flowers, they sell a good range of fried breakfasts, paninis, sandwiches, jacket potatoes and other hot and cold snacks.

During our stay, we also ate at The Anchor Inn, a picturesque stone-cottage pub right opposite the abbey. The weather was gorgeous on the Saturday night so we sat in the beer garden for our evening meal. My children loved the outdoor playground featuring a climbing frame and a wooden playhouse shaped just like the abbey. 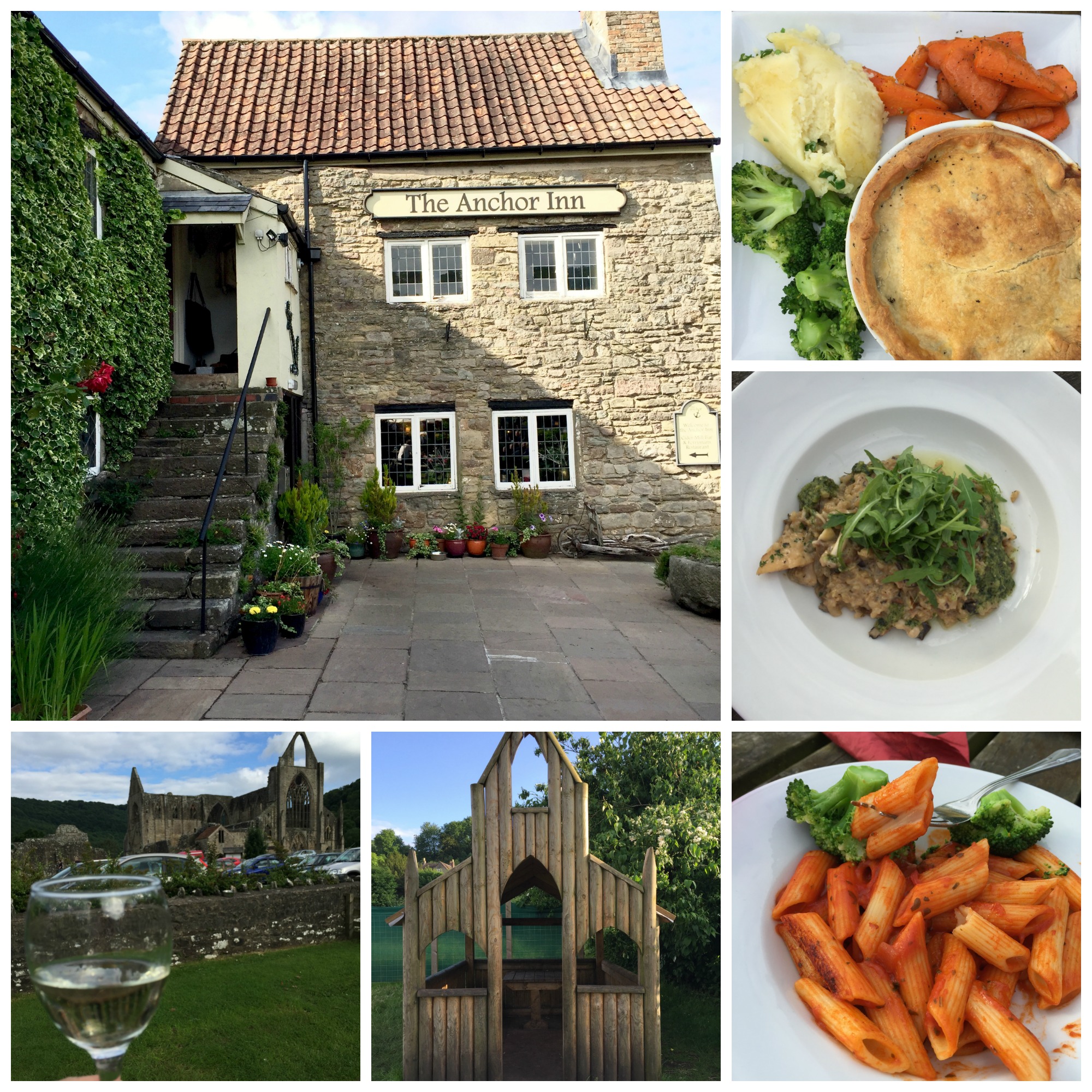 Despite the pub being really busy, our food came quickly (although they don’t start serving food until 6pm). I had a mushroom risotto, Cardiff Daddy opted for a chicken pie, Little Man O had a burger and Toddler and Little Miss E had pasta. It was a little on the pricey side at around £12 for mains and £7 for the children’s meals (including ice cream for dessert), but the portions were really generous and the food delicious.

If we’d had longer in the area, we would have spent more time exploring around the River Wye and also The Old Station at Tintern, which has woodland walks, a play area and a wooden play train.

But, as it was, we had a couple of fun day trips planned during our stay… more of that to come later in the week.

Read all of our family travel posts here.

Disclaimer – we stayed as guests of Tintern Abbey Cottage and visited Tintern Abbey as part of our role as Cadw blogger ambassadors. We paid for our meals at The Anchor and The White Monk tearooms ourselves and they did not know we would be reviewing them. Thanks to Wye Dean Tourism for their help in arranging our stay. 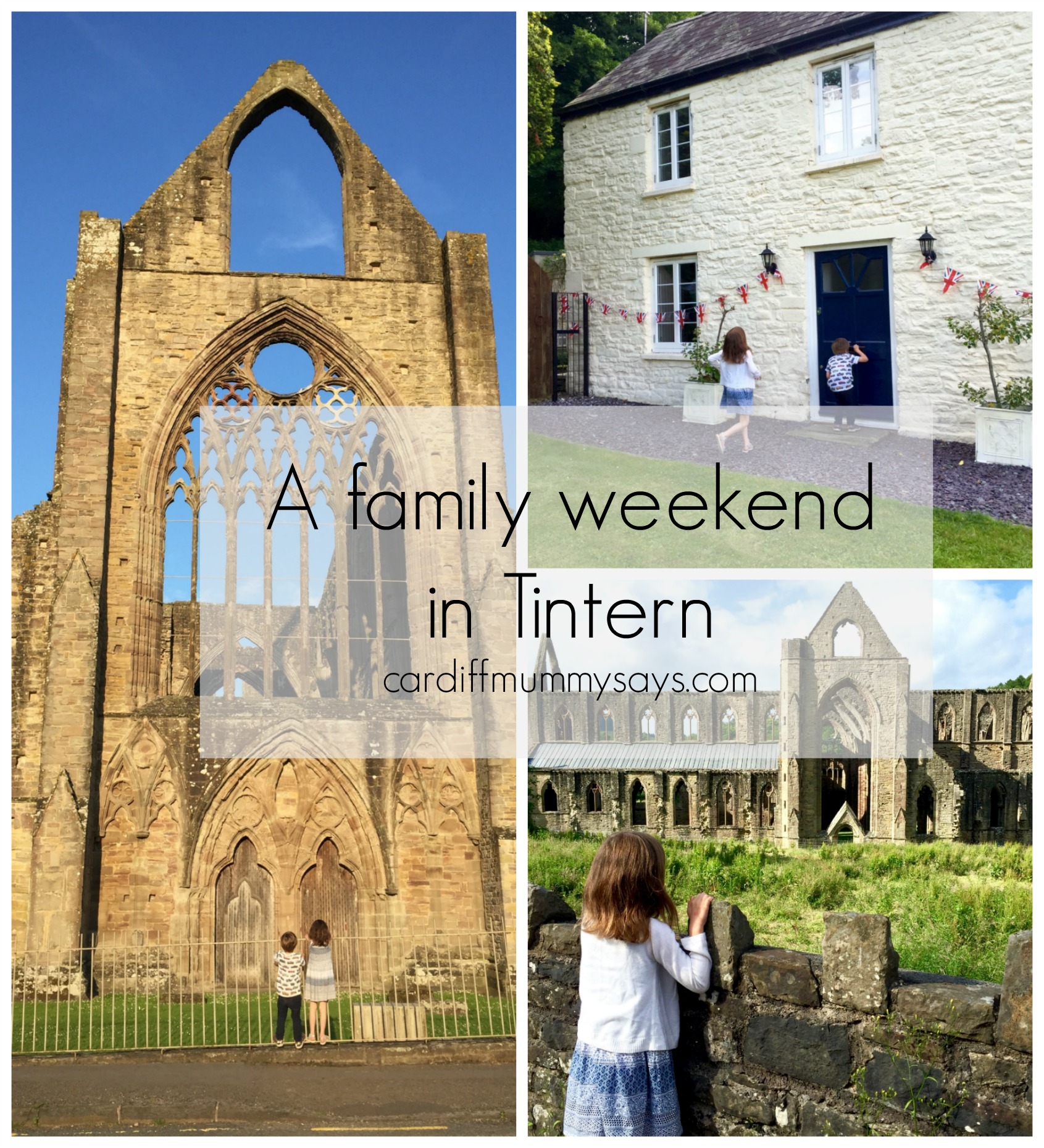 17 Comments to A family weekend in Tintern