cardiff days out, family days out, half term october 2021

How fitting that the UK’s largest animatronic dragon should make its debut public appearance in Cardiff. After all, what other country is lucky enough to have a red dragon on its flag?

With a moving head and tail, eyes which open and close, and life-like breathing movements plus a terrifying roar and smoky breath, it’s incredibly impressive… although perhaps a little scary for the youngest of visitors.

We headed along bright and early this morning to see the magnificent creature for ourselves as part of a special press launch welcoming the dragon to its home for the next two weeks. 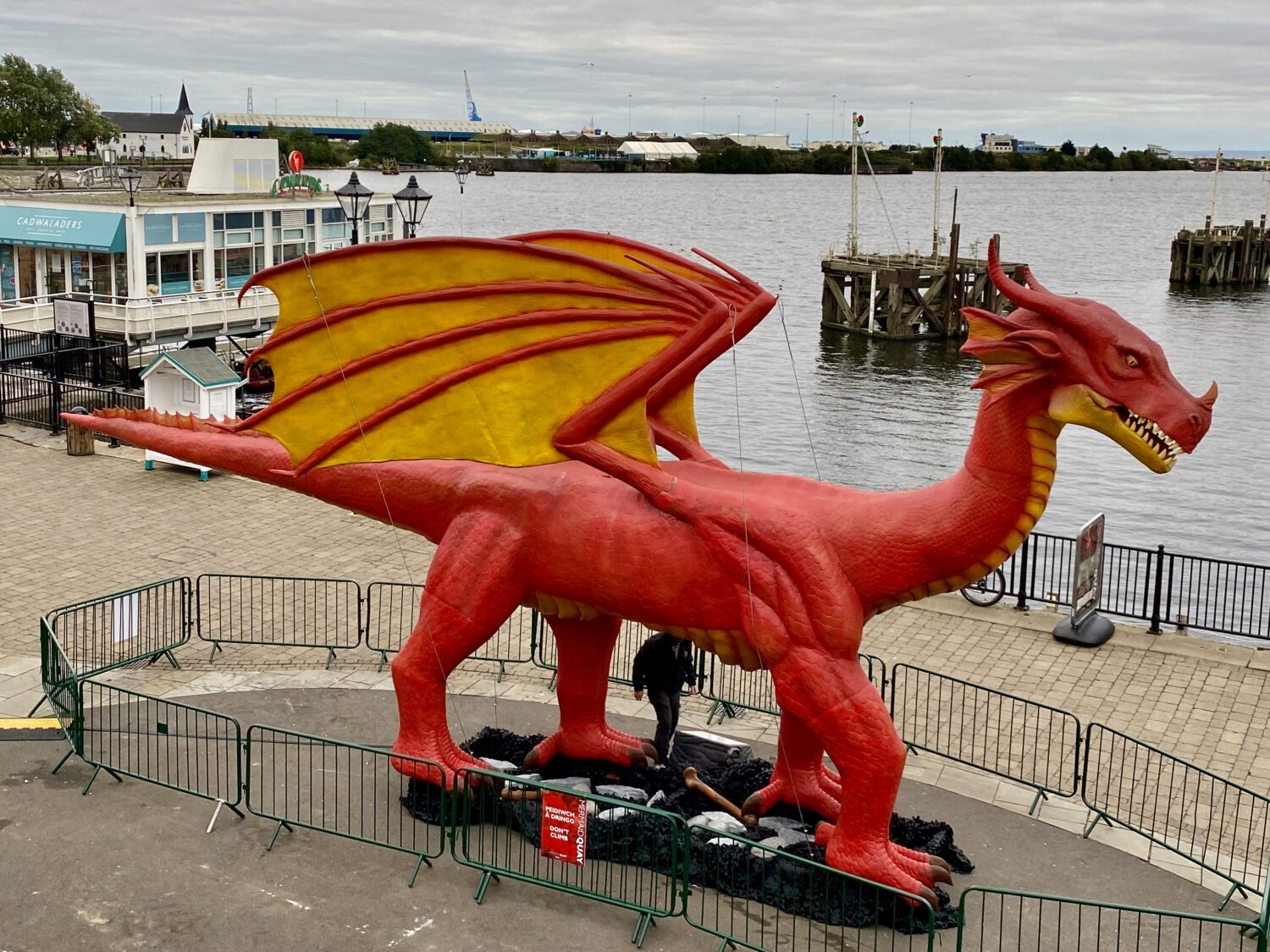 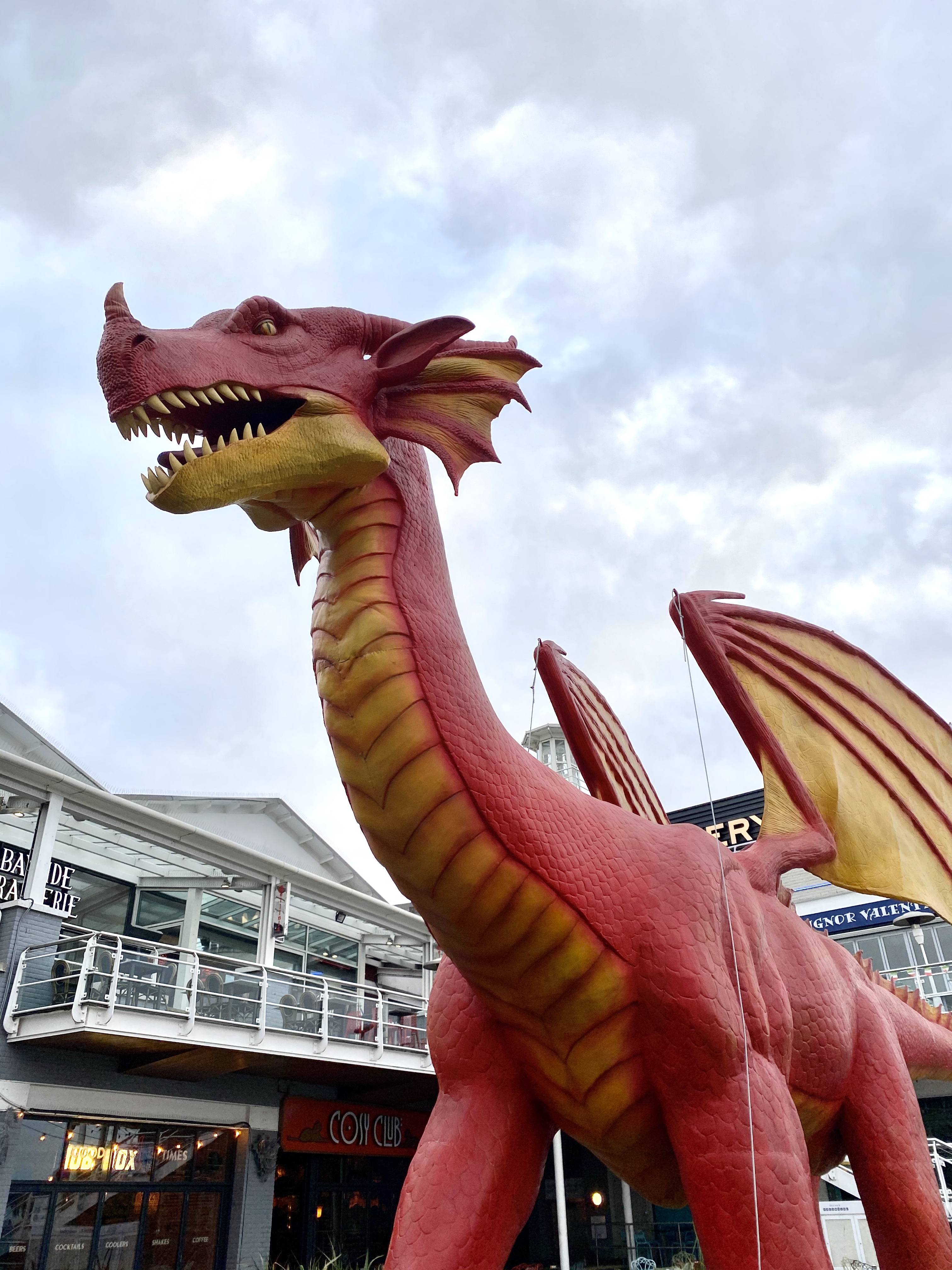 How long is the dragon staying in Cardiff?

The dragon officially opened to the public today and will be on display until Sunday 7 November. It is free to view. You can see it at any time, although the roaring and moving won’t be in operation at all times.

This is the latest in a long list of impressive life-size models to visit Tacoma Square. Who could forget the ginormous T-Rex from February 2020, the Lego big cats from October 2018, the Lego safari from 2018, Santa, his sleigh and reindeer from 2018 and the Santa Express Lego train from 2019? It’s great to see these showcase sculptures back after the last year and a half of restrictions.

When we were there this morning, the dragon was popular with visitors of all ages, stopping to look and taking photos. There’s been such a buzz about its arrival. 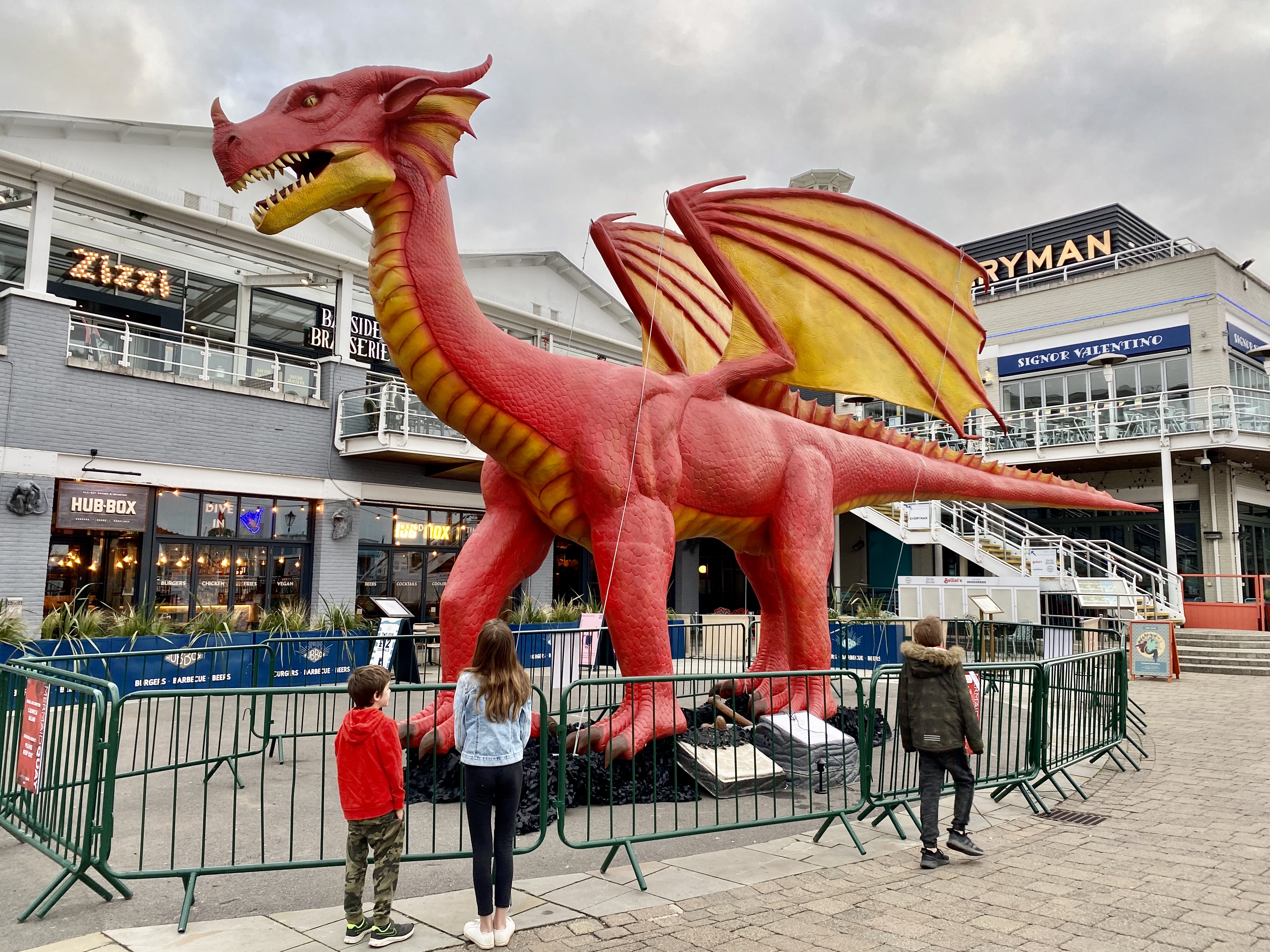 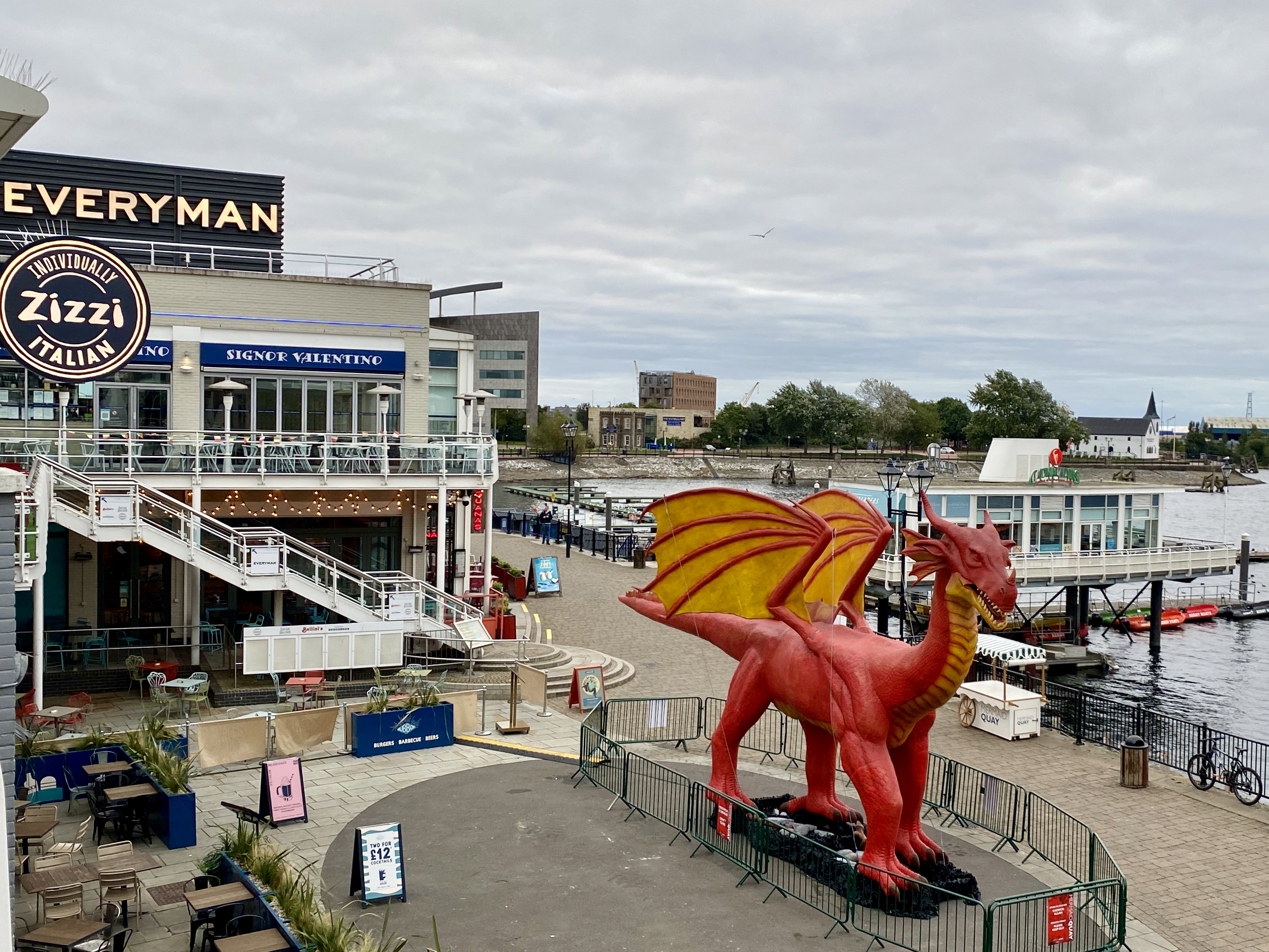 What else is there to do?

To celebrate its new resident, Mermaid Quay has plenty of dragon-themed activities taking place over the next two weeks.

Free dragon face painting is available Sunday 24, Saturday 30 and Sunday 31 from 11am-3pm, in the unit behind the dragon. 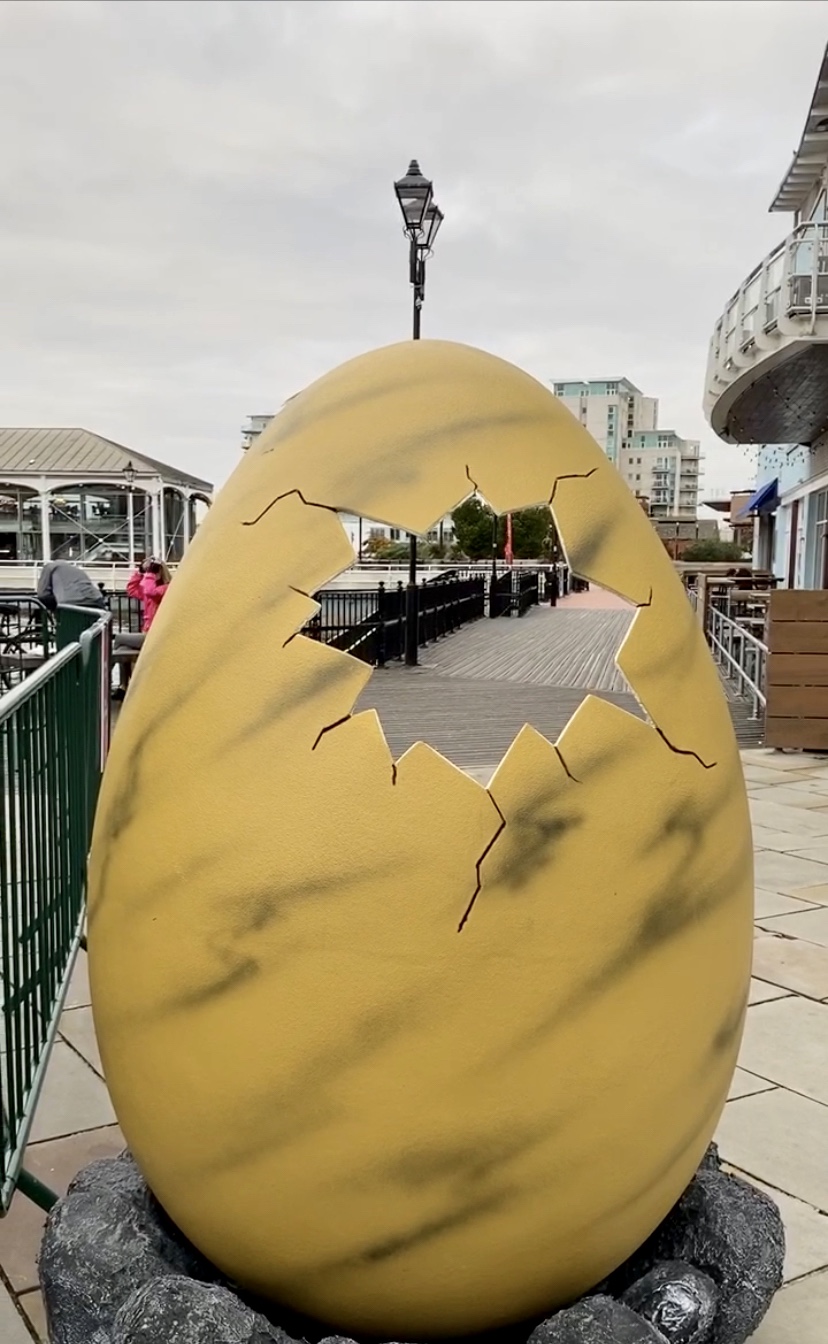 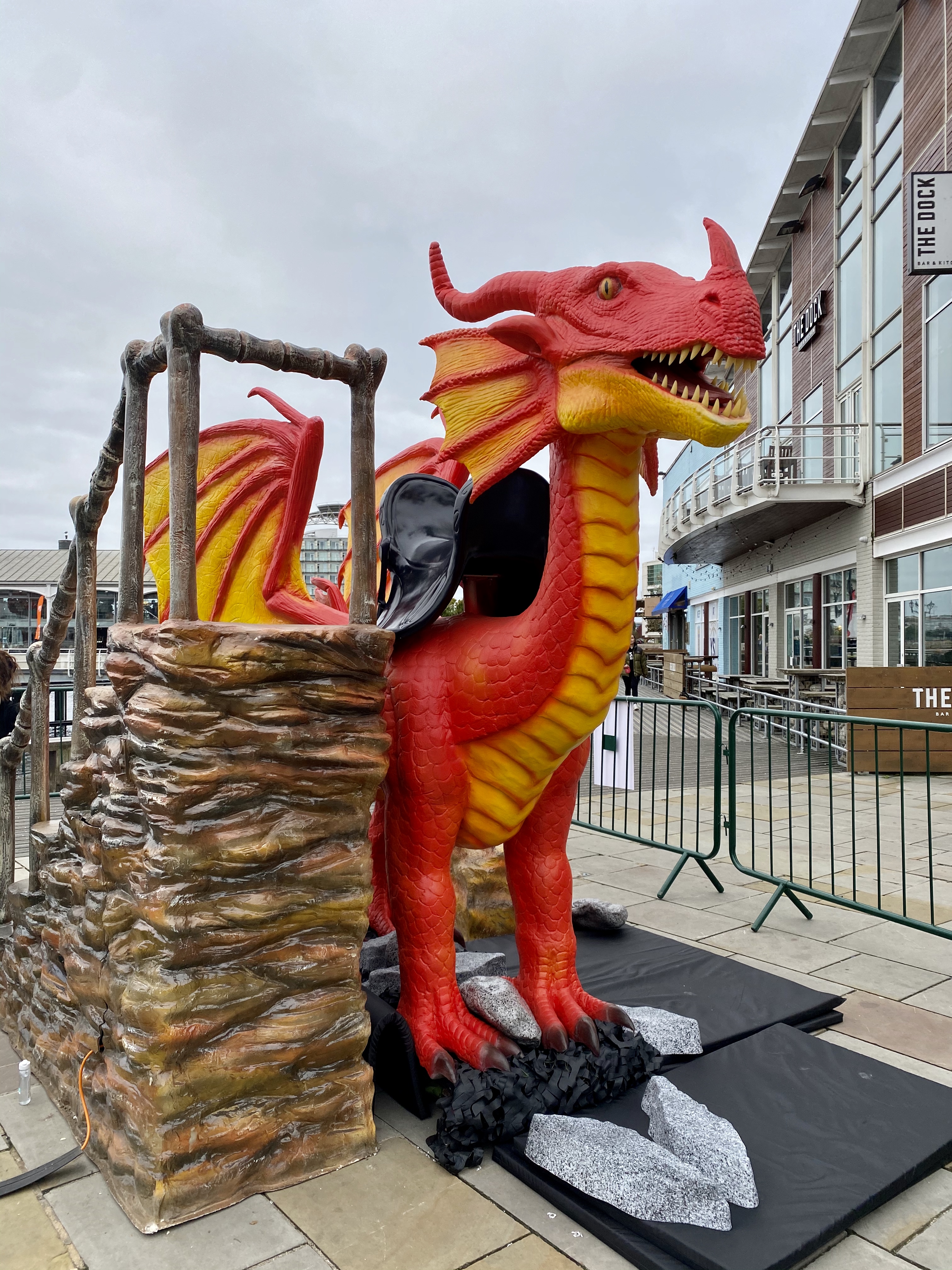 There’s a dragon ride for younger children, which costs £4, plus a dragon egg with a face-sized hole which makes for a perfect photo opportunity.

You can also head to Cadwaladers Mermaid Quay which has a limited edition Dragon Sundae on its menu. This is a child-sized sundae with a scoop of Cadwaladers vanilla ice cream and a scoop of strawberry ice cream, strawberry sauce, fresh whipped cream and chopped strawberries. Priced £3.95, it’s available from today.

Prizes to be won

A few people over on my Instagram page have asked me the dragon’s name and if you want to know this, you’ll have to head to Mermaid Quay to figure it out yourself. And if you do work it out, you can enter the prize draw to win a meal for four at Hub Box Mermaid Quay, an Aquabus trip for four from Mermaid Quay to the Principality Stadium (weather permitting) and four tickets to see Wales take on Australia on Saturday 20 November.

The giveaway closes at midnight on Sunday 7 November, following which a winner will be selected at random. 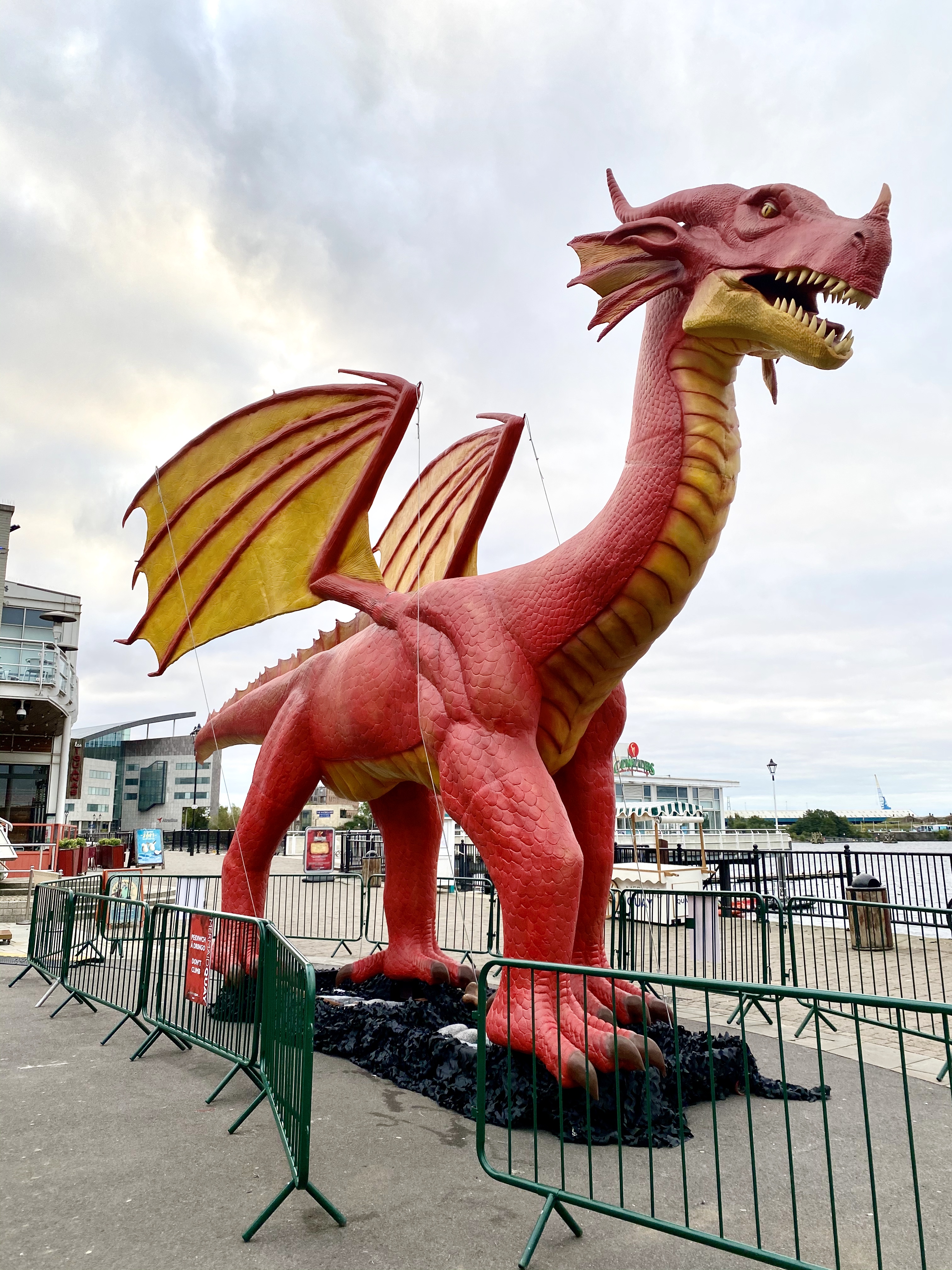 Children could win £50 worth of dragon goodies, by designing their own dragon. To enter, visit one of the participating Mermaid Quay businesses (Cadwaladers, Costa, The Dock, Everyman, Las Iguanas, Nando’s, PizzaExpress, Ridiculously Rich by the Sea) and ask for a colouring sheet to complete or print one off at home. One completed pop your completed entry into the special post box in the atrium between 7am and7pm daily. Entries must be submitted by 7pm on Sunday 7 November.

There’s also a year’s ice cream up for grabs from Cadwaladers Mermaid Quay. To enter, you need to find the six dragons on the loose around Mermaid Quay – pick up your treasure map from any of the venues displaying a treasure hunt clue or download from the Mermaid Quay website, return the completed form to the special post box in the atrium, which will be available 7am-7pm daily. Entries must be submitted by 7pm on Sunday 7 November.

How To Train Your Dragon at Everyman Cinema, Mermaid Quay

Everyman Cinema in Mermaid Quay has the perfect film showing over half term: How To Train Your Dragon.

We are huge fans of the film series Cressida Cowell’s books, but as the first film was originally released in 2010 when my eldest was just a baby we’d never watched it on the big screen before.

Getting the opportunity to not only do this but to do at Everyman was brilliant, because it’s such a luxurious film experience, perfect for a ha;f term treat. 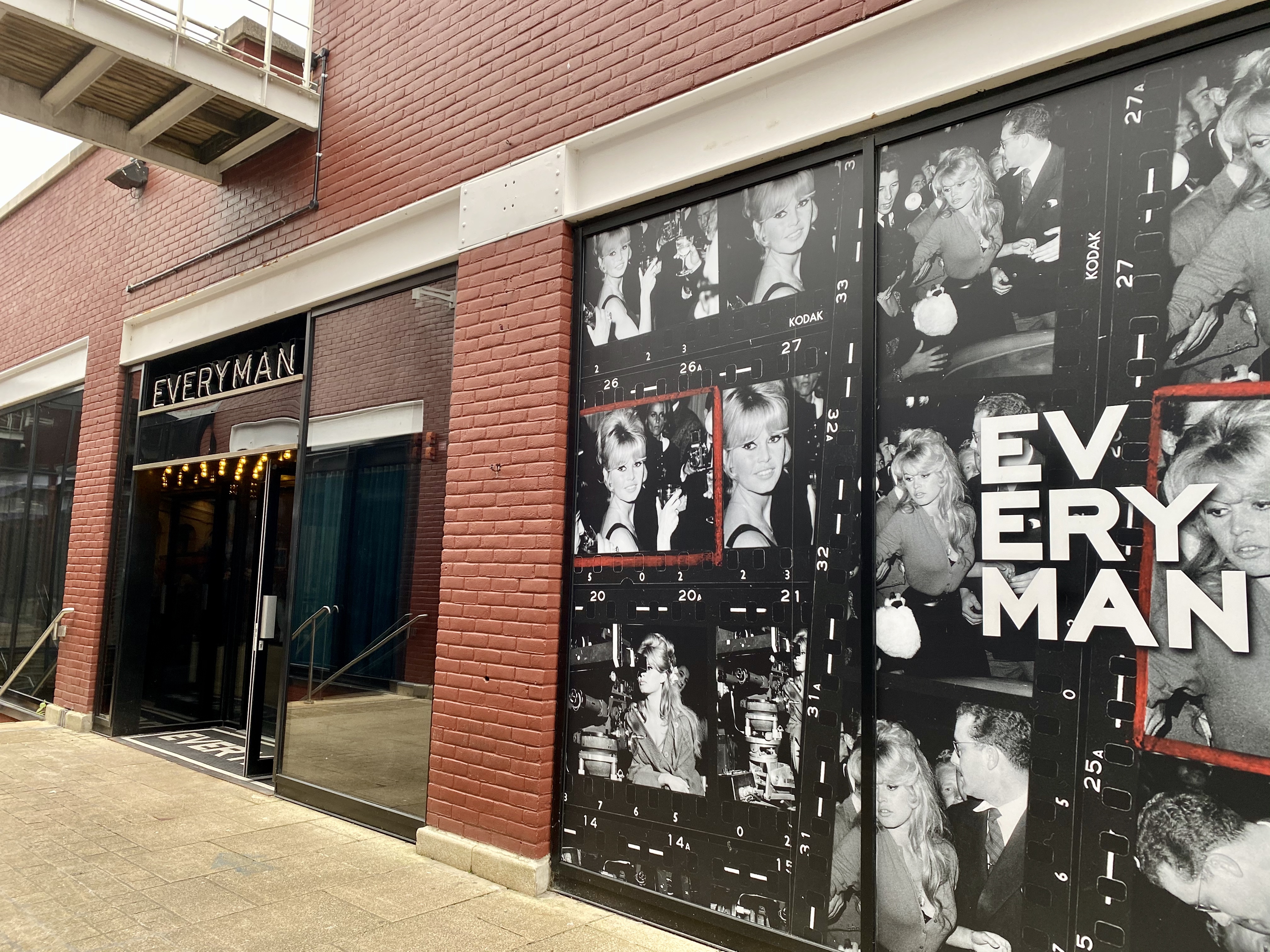 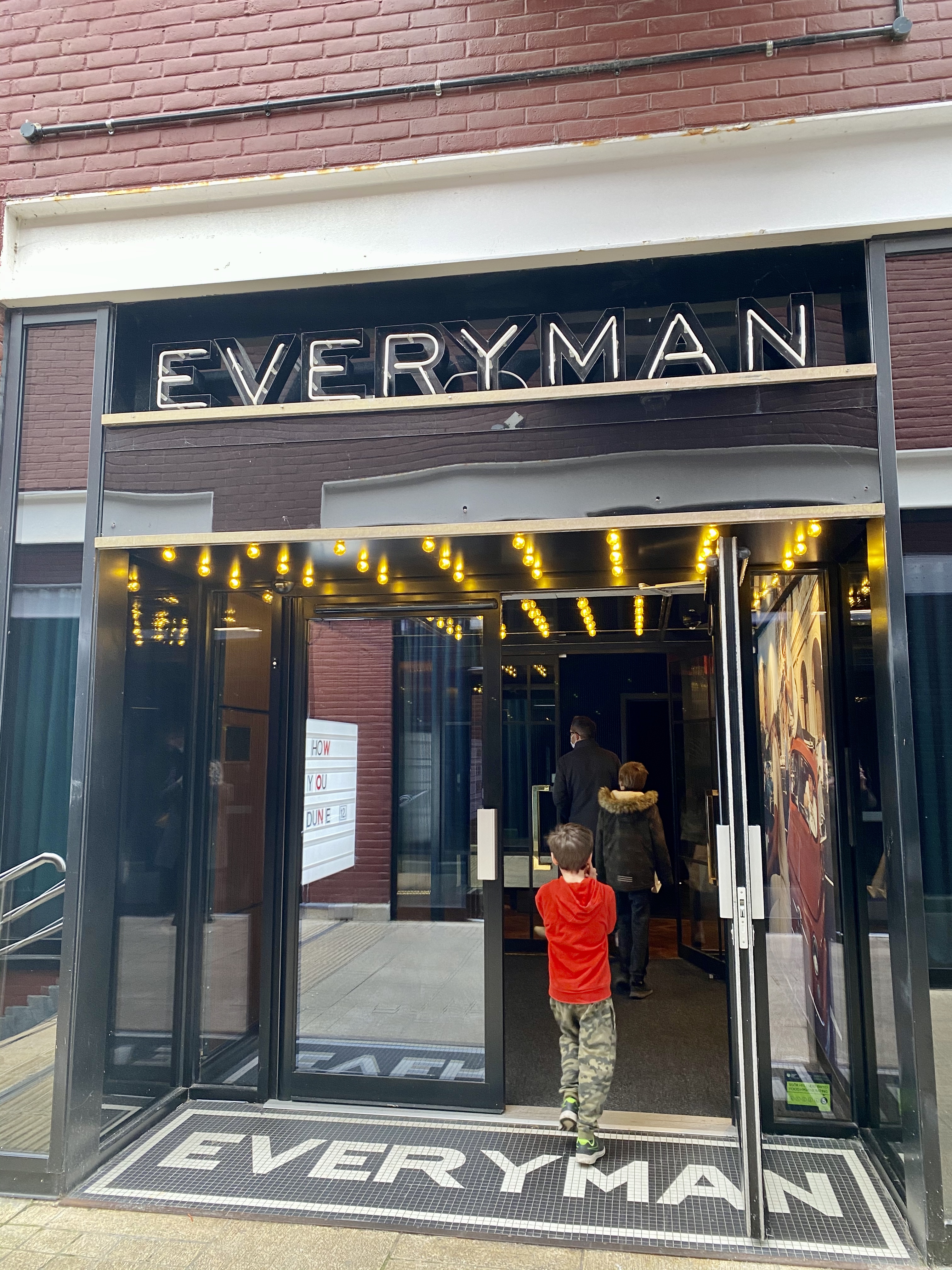 You can catch How To Train Your Dragon at Everyman Cardiff on the following dates, with further showings to be confirmed. 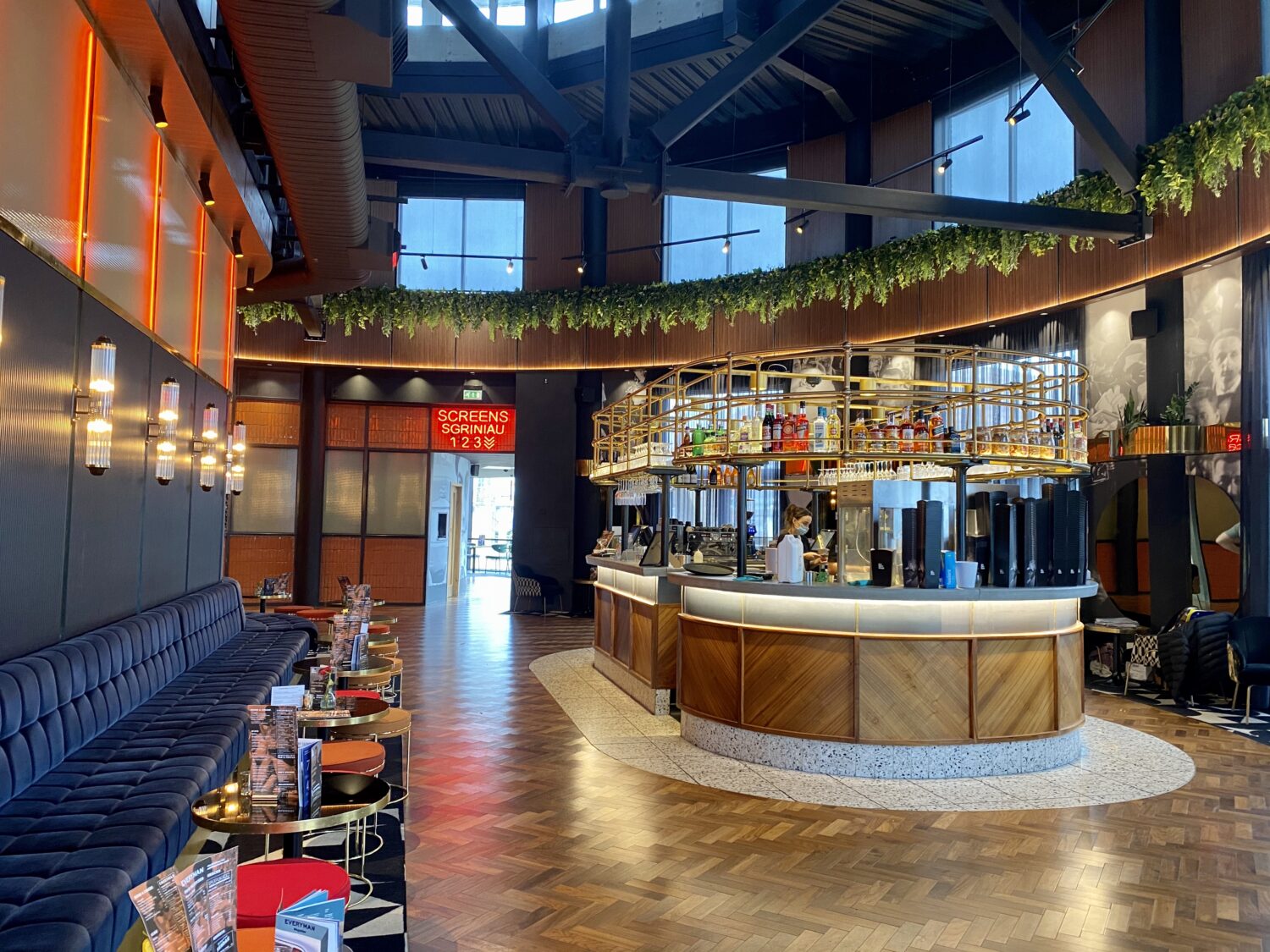 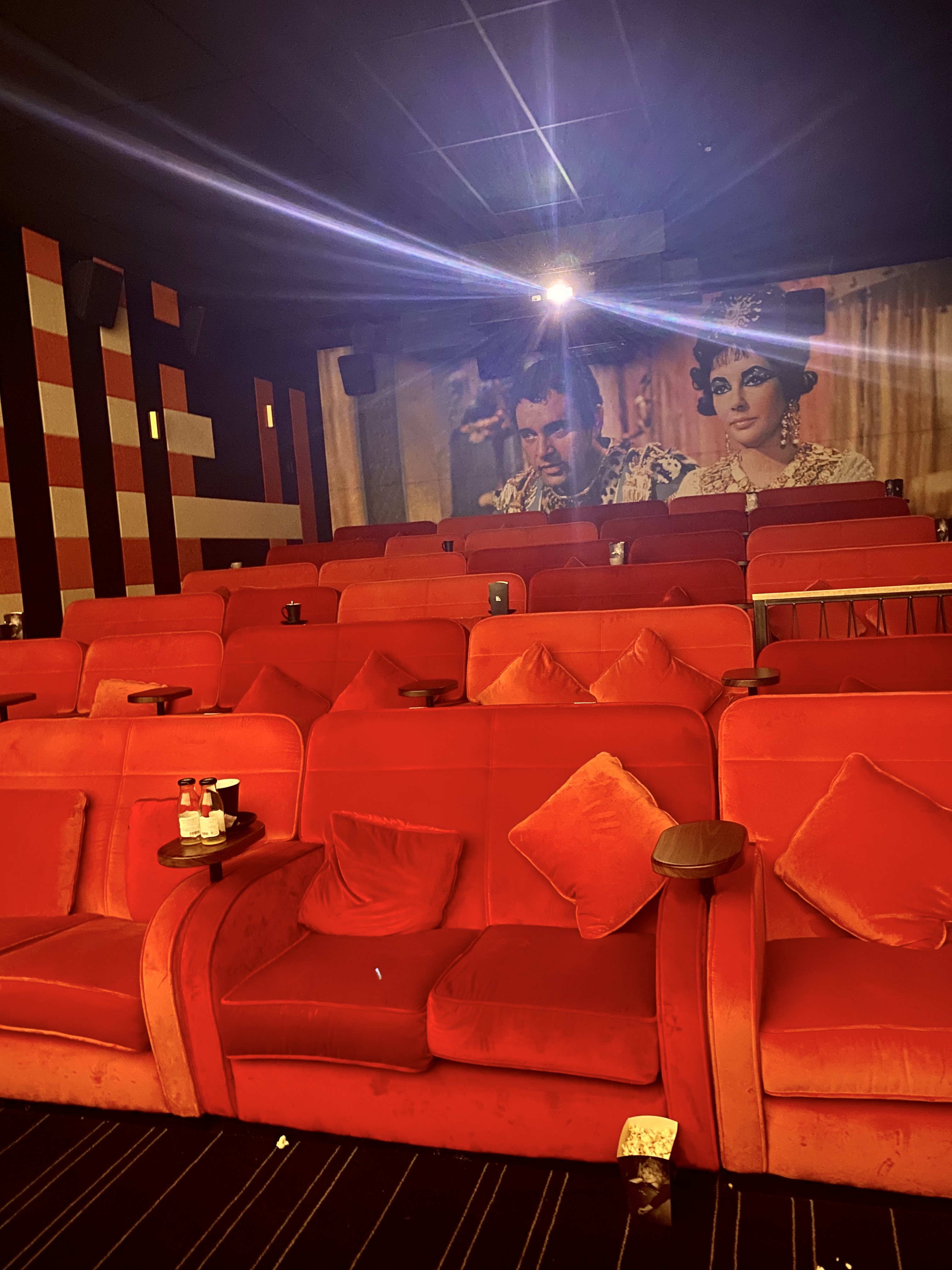 Everyman’s auditoriums are cosy and intimate, with audience members sitting on plush sofas adorned with cushions. You can order food and drink to your seats, including hot and cold drinks, pizzas and ice cream sundaes, or enjoy a drink in the bar area before or after the film. Some seats have the most gorgeous views across the Bay.

The Dreamworks classic (rated PG) is set in a mythical Viking land where teenager Hiccup is set to follow his tribe’s tradition of becoming a dragon slayer. However, after finally capturing his first dragon, the rare Night Fury, and with his chance of gaining the tribe’s acceptance, he finds he cannot bring himself to kill the dragon and instead befriends it, naming him Toothless. Can he persuade the rest of his tribe that dragons and humans can be more than ruthless enemies. 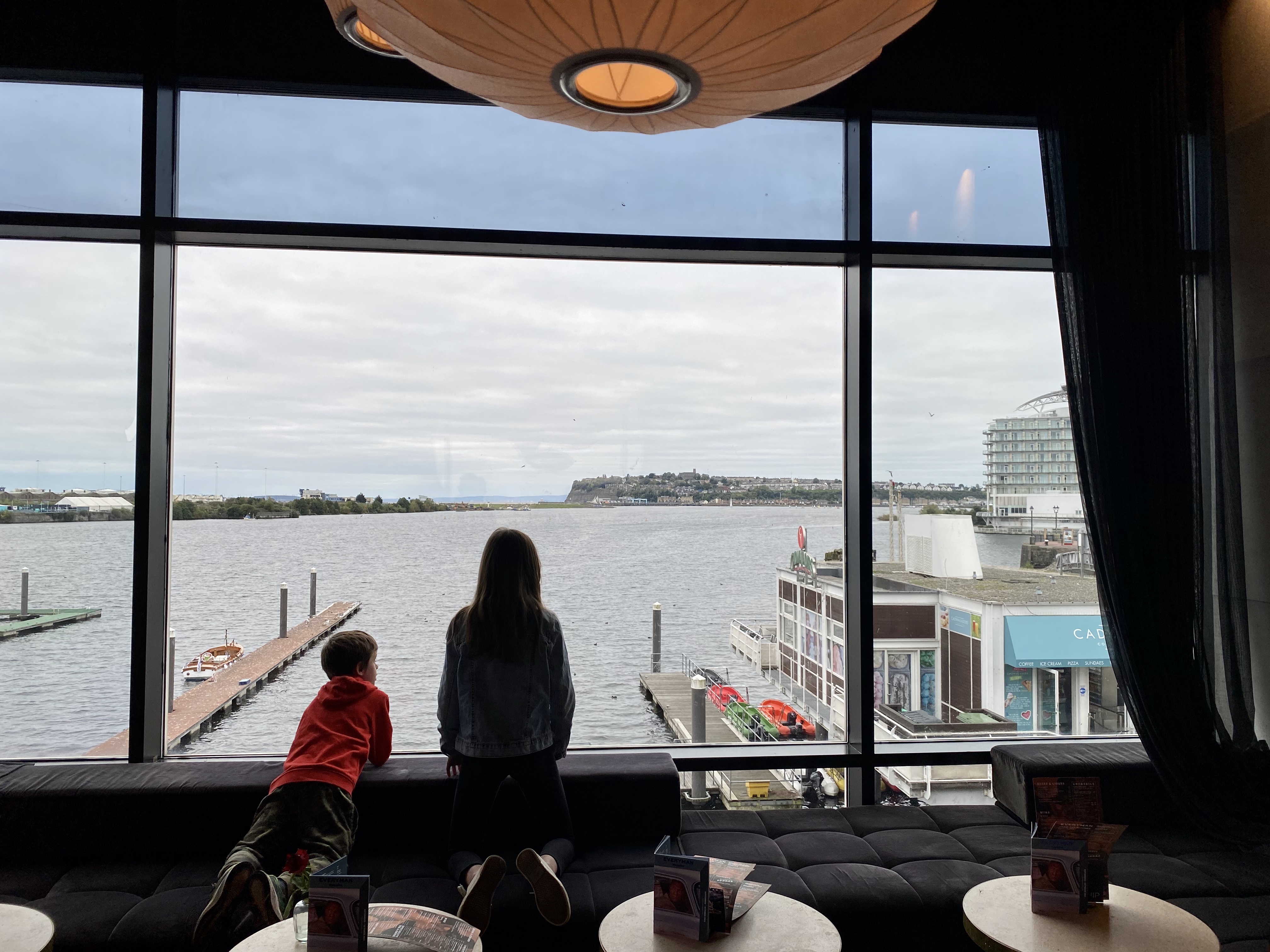 For more information on the dragon, visit the Mermaid Quay website.

For more ideas of family-friendly events in and around Cardiff this October half term and Halloween, see my latest events listings guide.

Will you be visiting the red dragon of Mermaid Quay this half term? Do let me know in the comments below or tag me in your photos. I love to see your adventures.

Homepage » Cardiff » There’s a huge dragon in Cardiff’s Mermaid Quay until 7 November, plus special screenings of How To Train Your Dragon at Everyman Cinema (AD)