* Thanks to The New Theatre for the review tickets

Way back in the summer of 2009, I saw The Sound of Music stage musical for the first time. I’d been working as a freelance PR for a theatre where it was being performed and I had lived and breathed that show for a good few months.

I was around five months pregnant with my first child – and goodness, during that show didn’t I know it. That baby wriggled and danced around so much in my belly for the entire duration of the performance that I could barely sit still. I joked to my theatre companions that he or she must have really enjoyed it.

Fast forward eight and a half years and that dancing bump has grown into Little Miss E, the eldest of my three children. She was four when she watched the classic 1965 film of The Sound of Music for the first time. Of the countless musical films she’s seen, this one instantly became her favourite. It’s the one she’ll ask to watch when she’s feeling poorly and wants to cwtch up under a blanket on the sofa. The one she knows every word to. The one she jumps around the living room singing the songs and re-enacting various scenes. The one we always joke that she started liking in the womb.

So you can imagine how excited she was to see the stage show for the first time last night as it opened at Cardiff’s New Theatre for a five-day run. She’s been waiting for this day for months, ever since she first saw a flyer at the theatre. Tonight certainly had a lot to live up to and despite the stage musical being an audience favourite since 1959 I was nervous in case it didn’t meet her expectations. 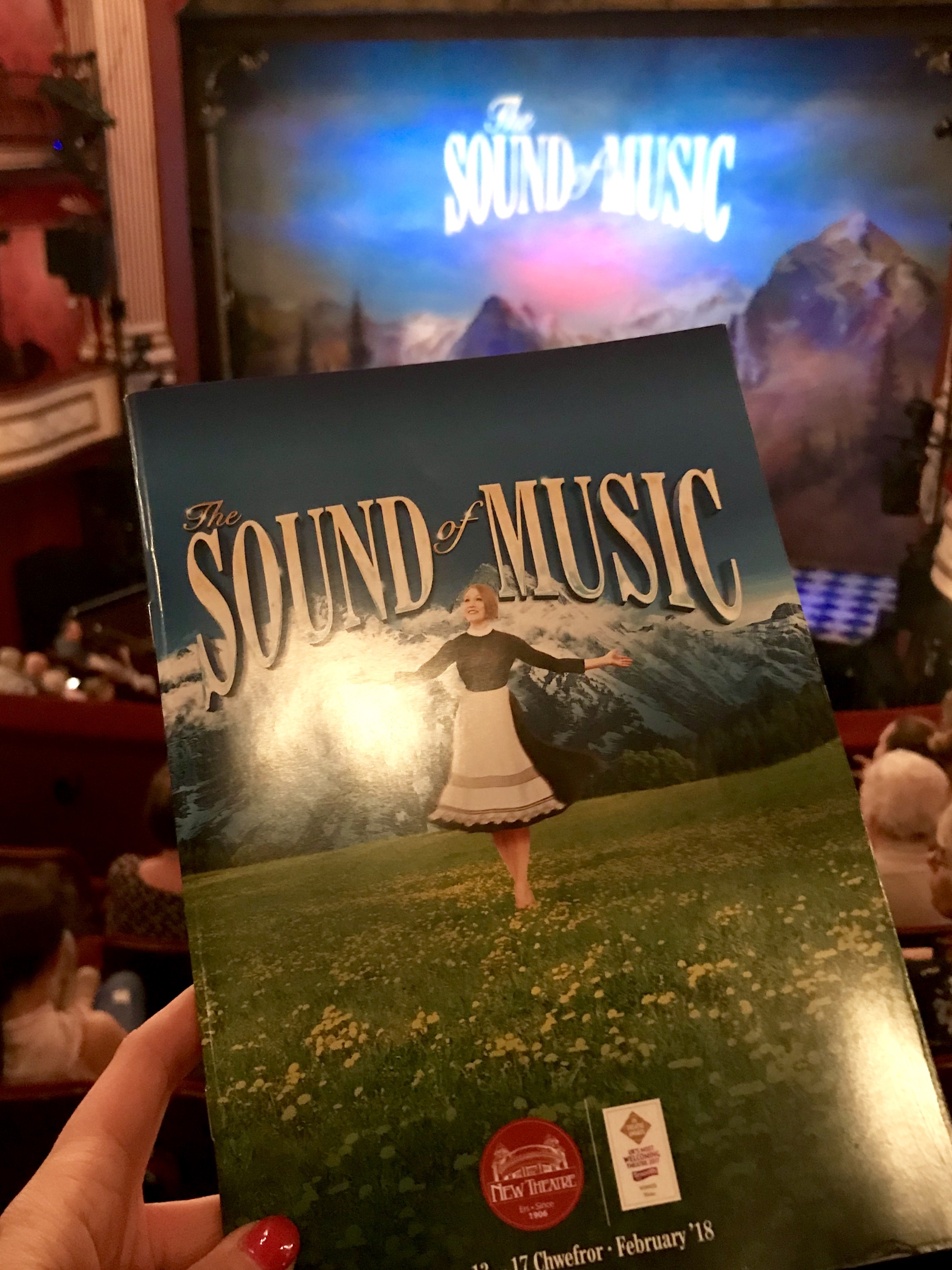 Thankfully it was everything she had dreamed it would be. Seeing her little eyes light up and her lips mouthing the words as familiar songs and characters graced the stage was such a beautiful moment to witness. Her six year old brother, Little Man O, also sat captivated throughout last night’s press performance. He has developed a fascination with World War II and as well as enjoying the music he loves the historical elements of the show. It’s set in Austria in 1938 on the eve of the Anschluss which saw Austria and Germany united as a country under the Third Reich and the threat of the Nazis is ever-present.

Lucy O’Byrne – runner up in the BBC’s talent show The Voice – plays Maria in Bill Kenwright’s touring production of Rodgers and Hammerstein’s world-famous musical about the singing family. She has a beautiful stage presence and a voice that is light, crisp and airy but deep, smooth and soothing all at once. Her voice has such a beautiful tone and clarity and she powers through the famous musical numbers with such ease and grace. She received much critical acclaim for her previous portrayal of the role, with The Scotsman saying she was “quite possibly the best Maria since Julie Andrews herself”. And while I only have the equally-acclaimed Connie Fisher to compare her to there’s no doubting that O’Byrne is perfectly cast in the iconic role. She’s definitely reminiscent of and inspired by Andrews but is not bound by the film portrayal, more than making Maria her own with an added dash of feistiness too. 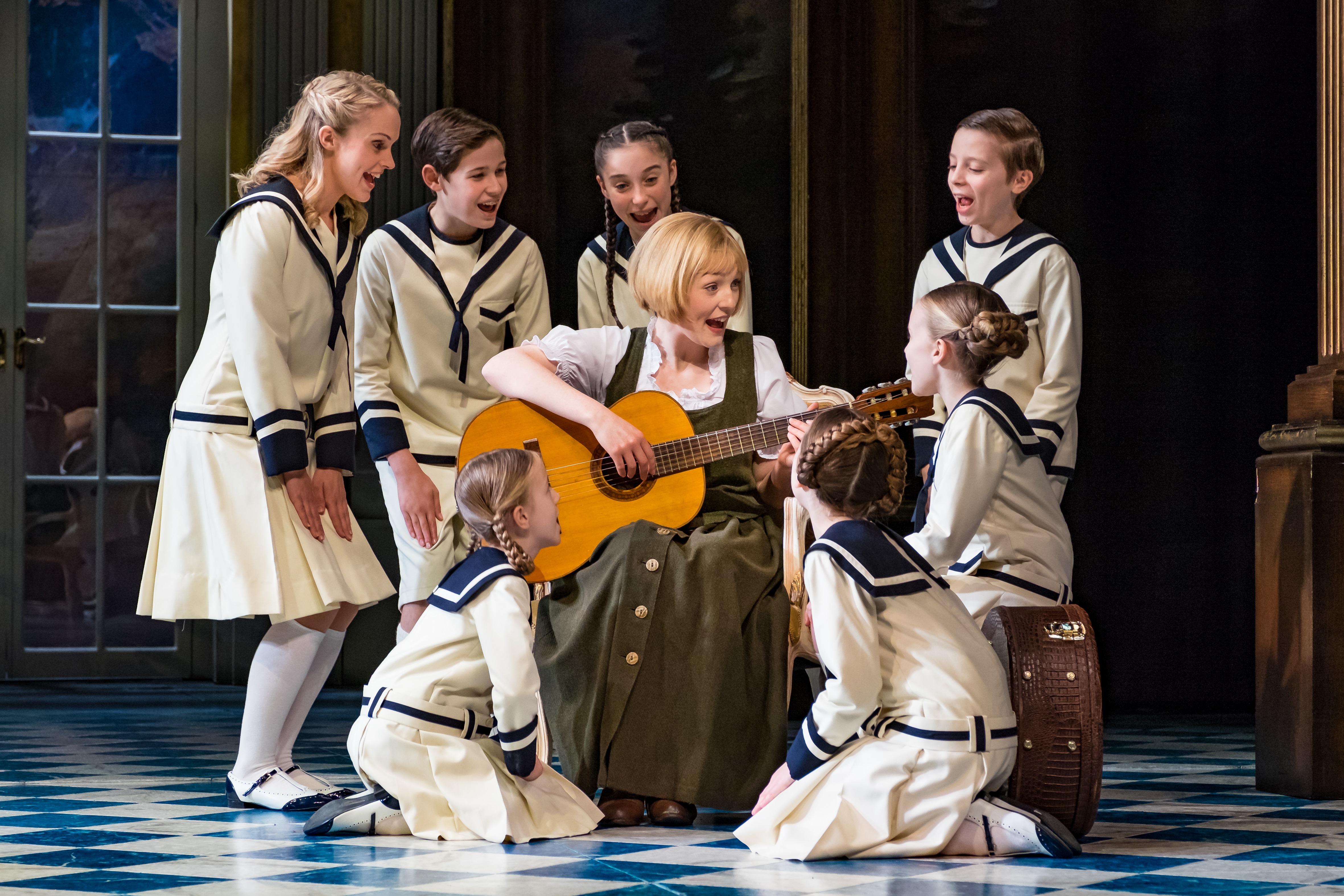 Neil McDermott plays Captain von Trapp – the widowed father of the seven children Maria is sent to be governess of when Mother Abbess realises Maria is not quite cut out for life as a nun. Famous as Ryan Molloy in EastEnders, McDermott’s transformation from cold-hearted naval officer who summons his children and staff with their own whistle signal, to loving and lovable all-singing father is quite emotional.

As Mother Abbess, Megan Llewellyn’s operatic-style rendition of Climb Ev’ry Mountain is so powerful; you can hear the gasps among the audience as she belts out the high notes with grace. The programme notes reveal she’s a soloist with Welsh National Opera and trained here in Cardiff at the Royal Welsh College of Music and Drama. During the finale she gets one of the biggest cheers of the night.

As anyone who has watched the film will know, the children are central to the story. Katie Shearman as Liesel, the eldest of the Von Trapp siblings, is a competent and very likeable performer and although the lyrics to Sixteen Going on Seventeen sound so dated now, she and Jordan Oliver, as her love interest, telegram messenger boy Rolf, are delightful to watch as they dance around the stage.

The other six Von Trapp children are played by three different sets of young performers during the tour so I won’t single any of them out other than to say that their costumes and mannerisms echo that of the film and their performances were so strong and confident given their young ages. My children thought they were amazing.

The set is stunning with much of the action taking place amid the tall pillars of the abbey and the spiral staircase of the von Trapp’s home set against the backdrop of the famous snow-covered mountains.

There are many similarities between the show and the film. But there are also a lot of differences too. Whole chunks of dialogue appear word for word and the costumes and characterisation echoes the film. Much-loved musical numbers including Maria, My Favourite Things, Do-Re-Mi, The Lonely Goatherd and So Long, Farewell are all there, although some of them don’t appear where you would expect them to. There are a few unfamiliar-to-most musical numbers too which were in the original stage show but not the film. Act II opener No Way To Stop It sees the Captain’s love interest Elsa Schraeder (Kara Lane) and his theatre producer friend Max (Howard Samuels) telling Captain von Trapp, a proud Austrian, that there is nothing he can do to halt the rise of the Nazis and that he should go along with what they want for the sake of an easy life. This added dimension certainly helps explain more about why Elsa and the Captain’s relationship was doomed to fail in  way we don’t see in the film.

I asked Miss E what she made of these ‘new’ songs and she was nothing but positive, commenting that it made it more exciting for audience because it was something unexpected. However, a friend I bumped into while leaving the theatre said she felt quite protective of the musical film and found these songs difficult to listen to because she didn’t know them.

I liked the depth that they added to the show especially knowing that the songs were there from the beginning.

Either way though, this is a show that won’t disappoint. Top class performers, a stunning set, familiar songs, a heart-warming tale of a cold heart thawed by love and the importance of family and standing up for what you believe in; this is musical theatre at its best. It’s already been an audience favourite for close to 60 years; and with a new generation of fans discovering the show for the first time it’s well on its way for another 60. 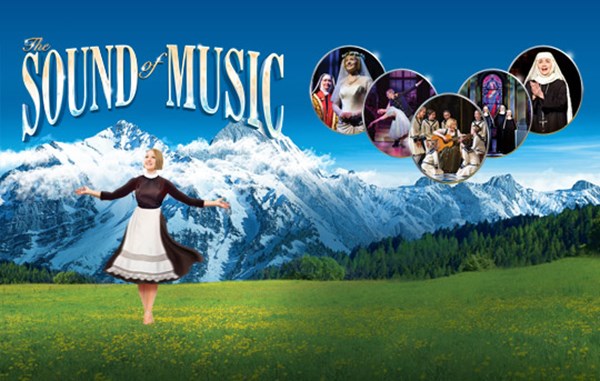 The Sound of Music is at the New Theatre Cardiff until Saturday 17  February, with performances nightly at 7.30pm plus 2.30pm matinees on Wednesday, Thursday and Saturday. Book online or call the box office on 029 2087 8889.

Homepage » Cardiff » The Sound of Music at the New Theatre, Cardiff – review

1 Comment to The Sound of Music at the New Theatre, Cardiff – review