Collaboration with The Welsh Rugby Union. We received tickets for the game and my son was mascot in exchange for this post.

I honestly don’t even know where to start! Today has been such an incredible day! As official mascot for Wales, my seven-year-old son certainly won’t forget his first international rugby game in a hurry.

Hanging out with George North and Dan Biggar in the Wales changing rooms; running through the players’ tunnel with first-time captain Josh Navidi; singing the Welsh national anthem on the pitch (word perfect… thank goodness!); being given a full replica kit and ball, which he managed to get signed by Sam Warburton, Rhys Carre and Ken Owens; pitch side seats for our family. 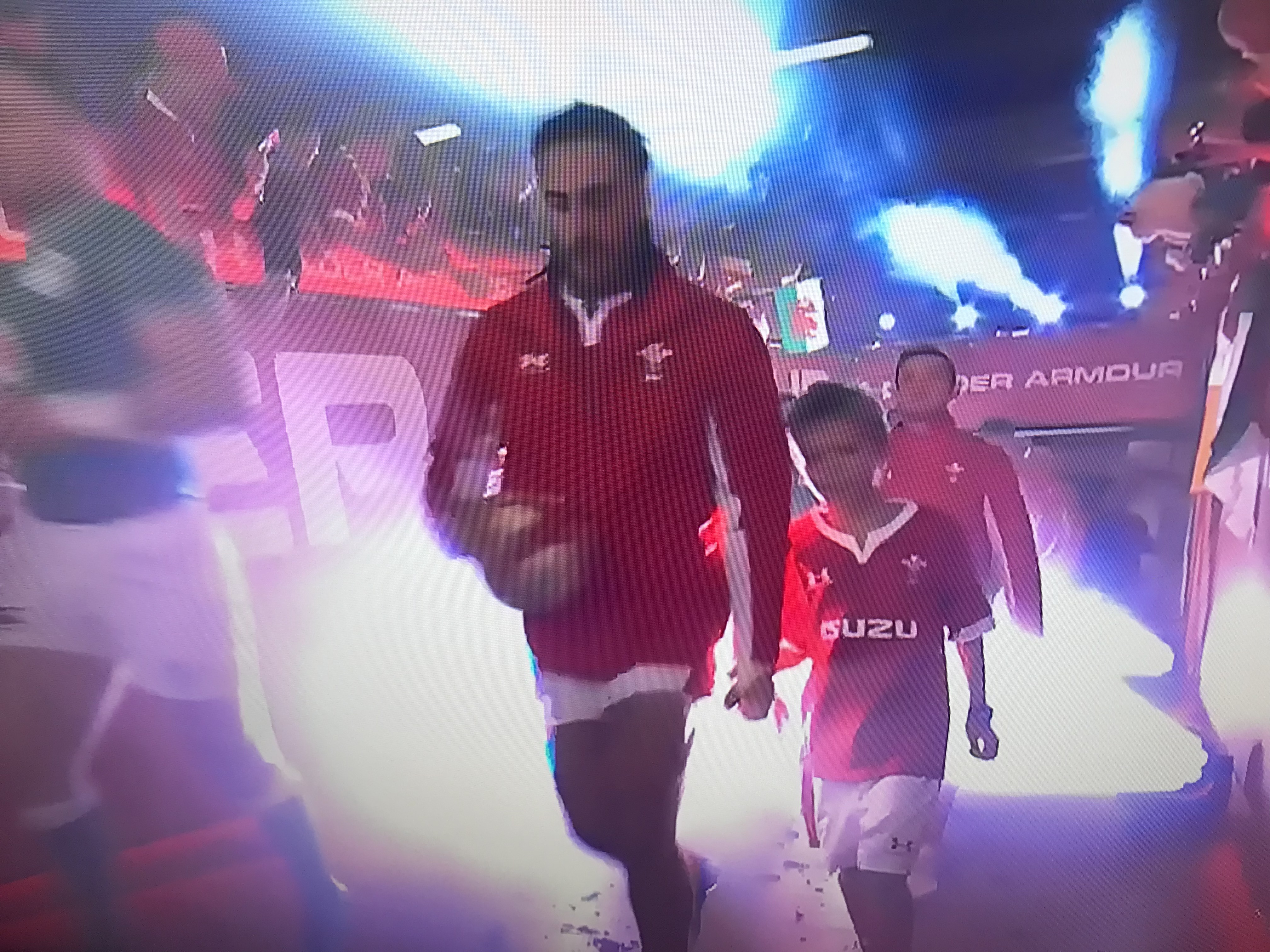 My son, as official mascot, running through the tunnel with Josh Navidi 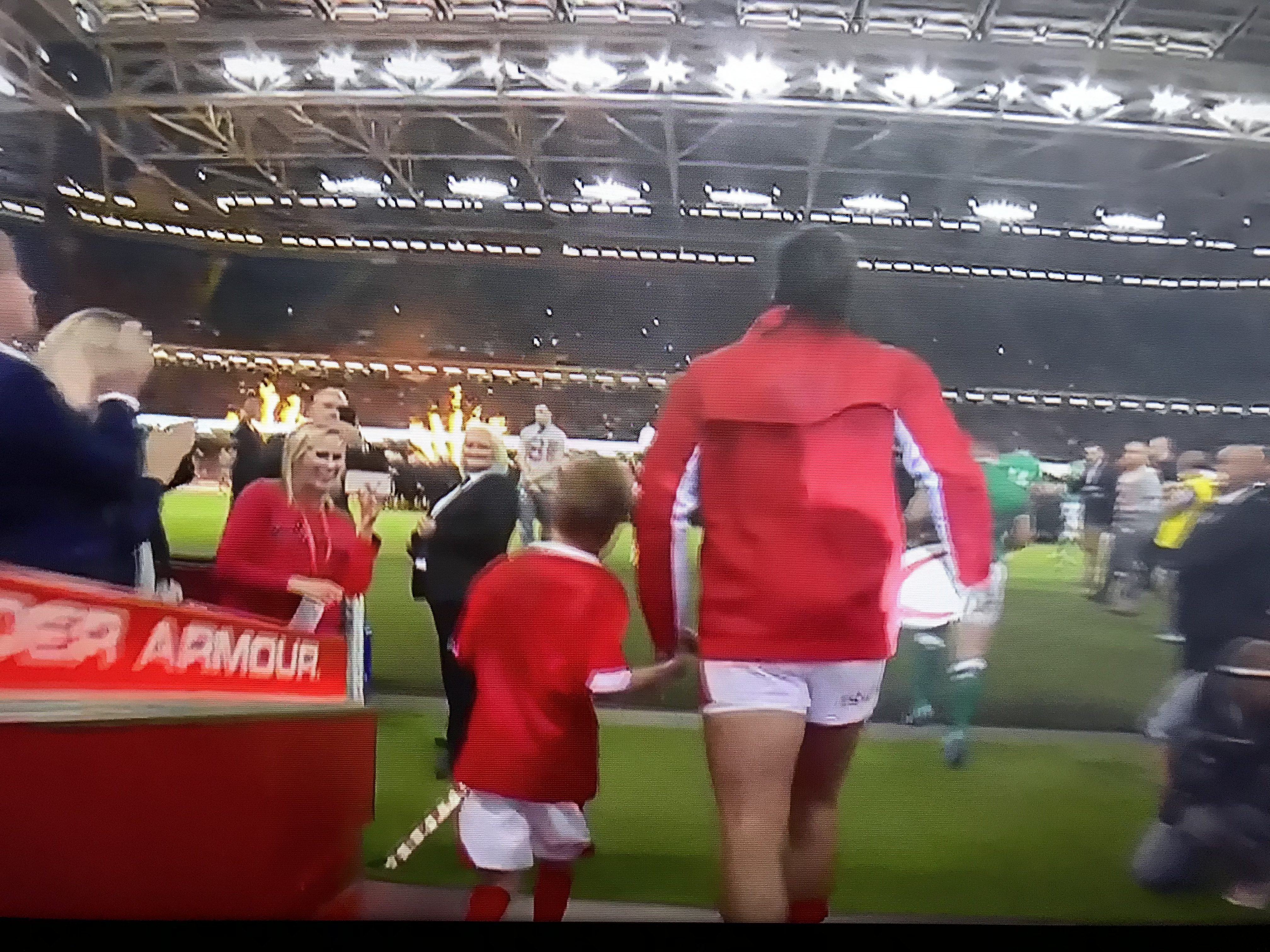 I’m not going to give you a full match report here – there are countless sports reporters far better qualified to do that than me. In brief though, Wales certainly weren’t at their strongest with 14 changes to the team that beat England two weeks ago as coach Warren Gatland finalises his squad for next month’s World Cup in Japan.  But it was good to see newbies such as Rhys Carre and Owen Lane gaining their first caps and Josh Navidi captaining the side for the first time.

Wales weren’t great in the first half, with Ireland dominating and racking up the points. However, we came back a little in the second half with some fantastic tries from Owen Lane and Rhys Patchell. Not quite enough to win, but a respectable enough final score considering at 63 minutes the score was 3-22. Patchell’s 76th minute try gave us hope that perhaps we could manage a last-minute victory…. but sadly it wasn’t to be. 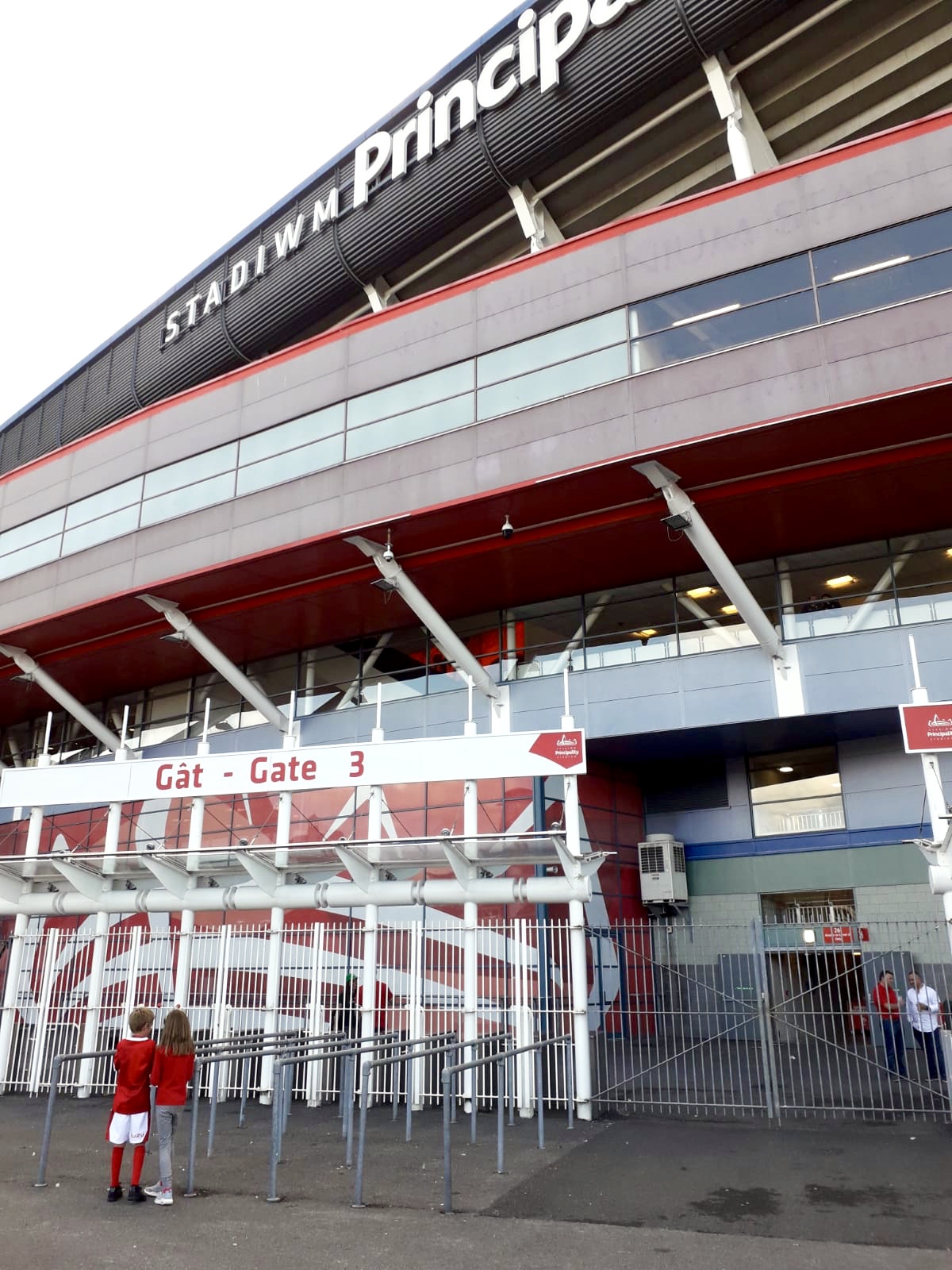 Having watched so many Wales rugby games on the TV, this was my children’s first international match and they loved the atmosphere inside the stadium and indeed around Cardiff city centre beforehand. My nine and five year olds had their faces painted with the Welsh three feathers and red dragon, and they sang along with the male voice choir to classics such as Calon Lan and Bread of Heaven before kick-off.

Before the game we were invited into the International Players Lounge for pre-match food and drinks. The display cabinets in this room are a real treasure trove of Welsh rugby history, including shirts from more than 100 years ago.

Little O and I also got to visit the Wales changing room where Biggar and North (who weren’t playing today) were so welcoming and friendly, giving him a tour and asking him questions about his rugby team. We’d thought the changing room was going to be empty so this was a real treat! 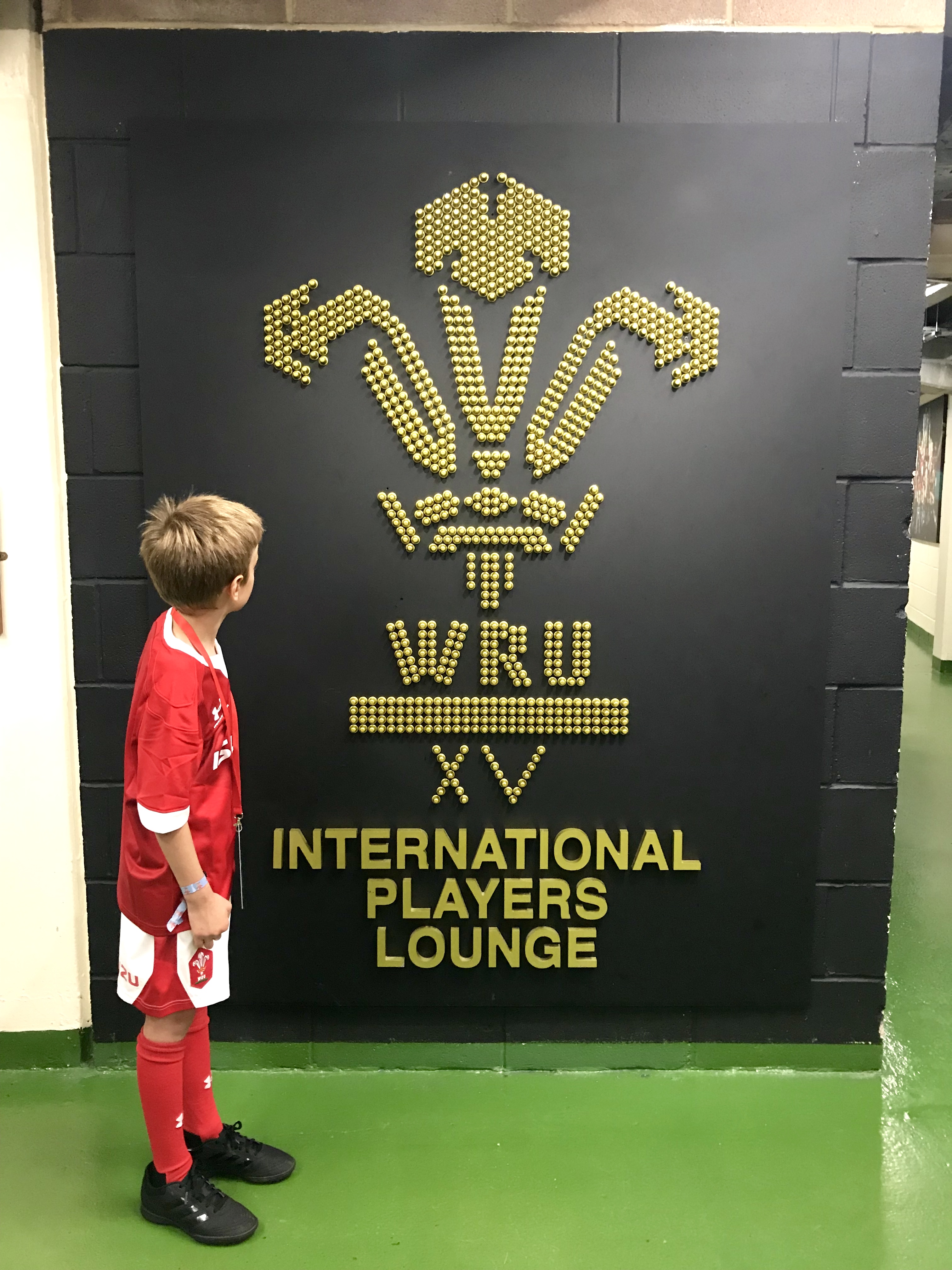 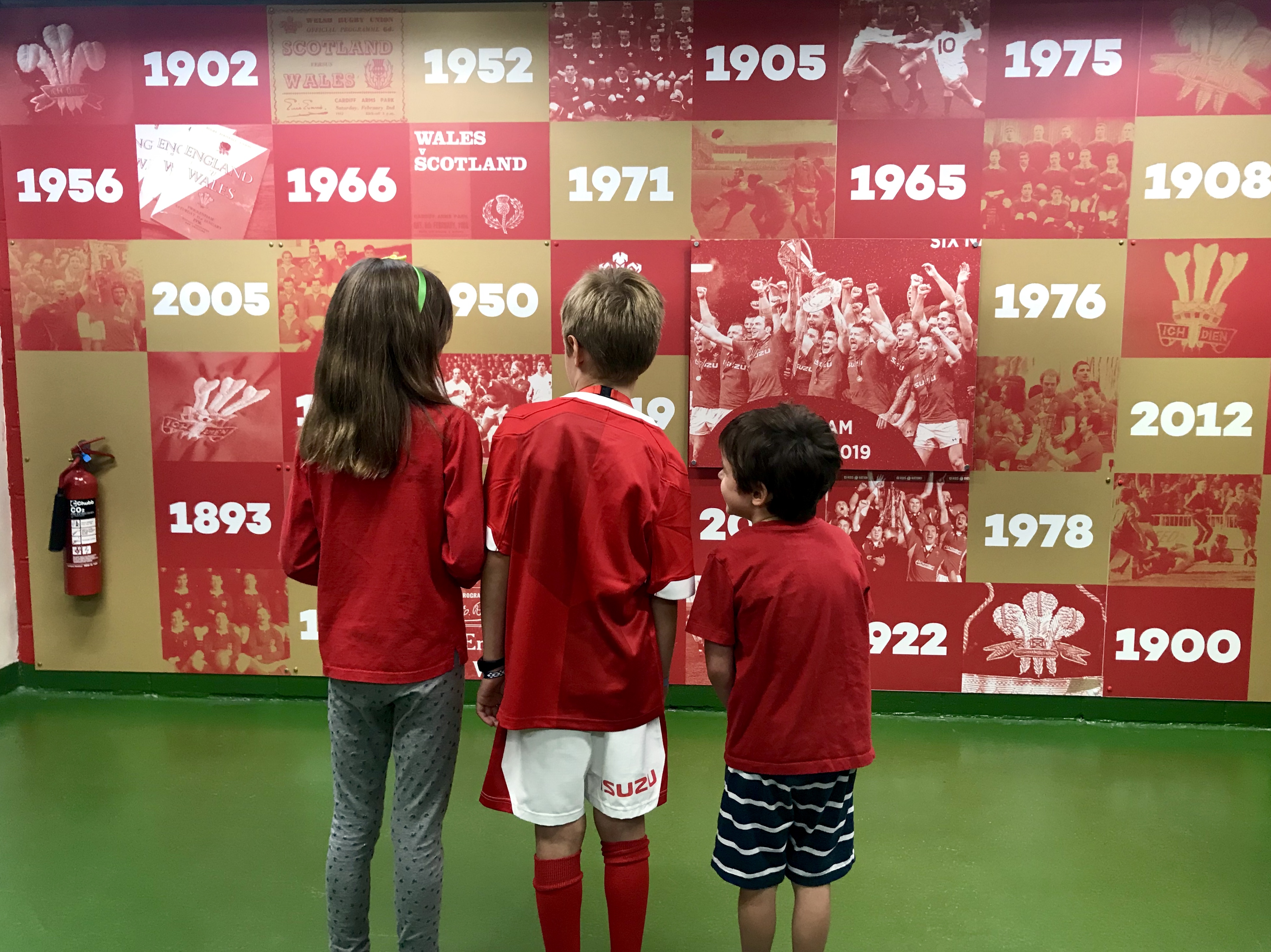 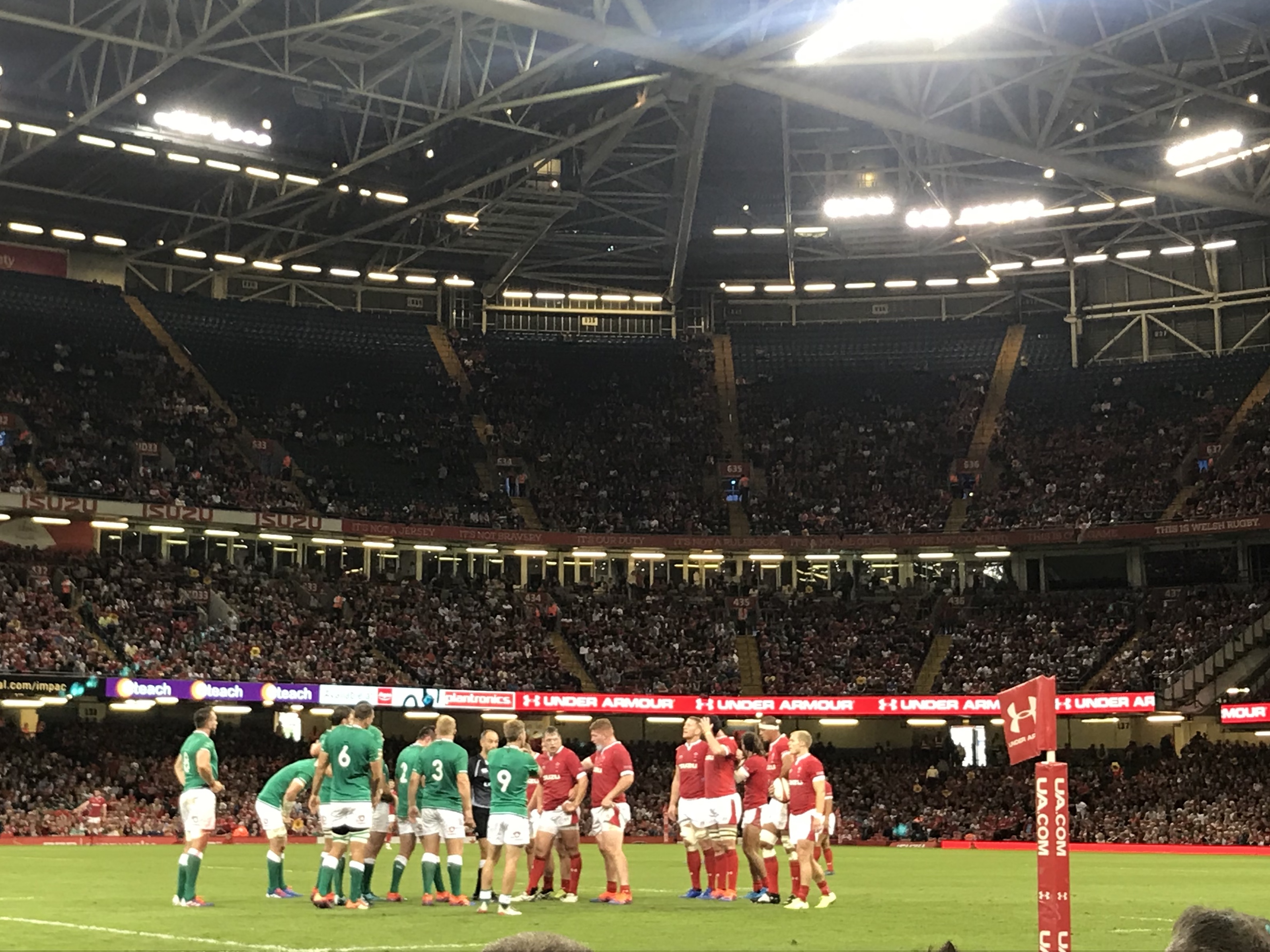 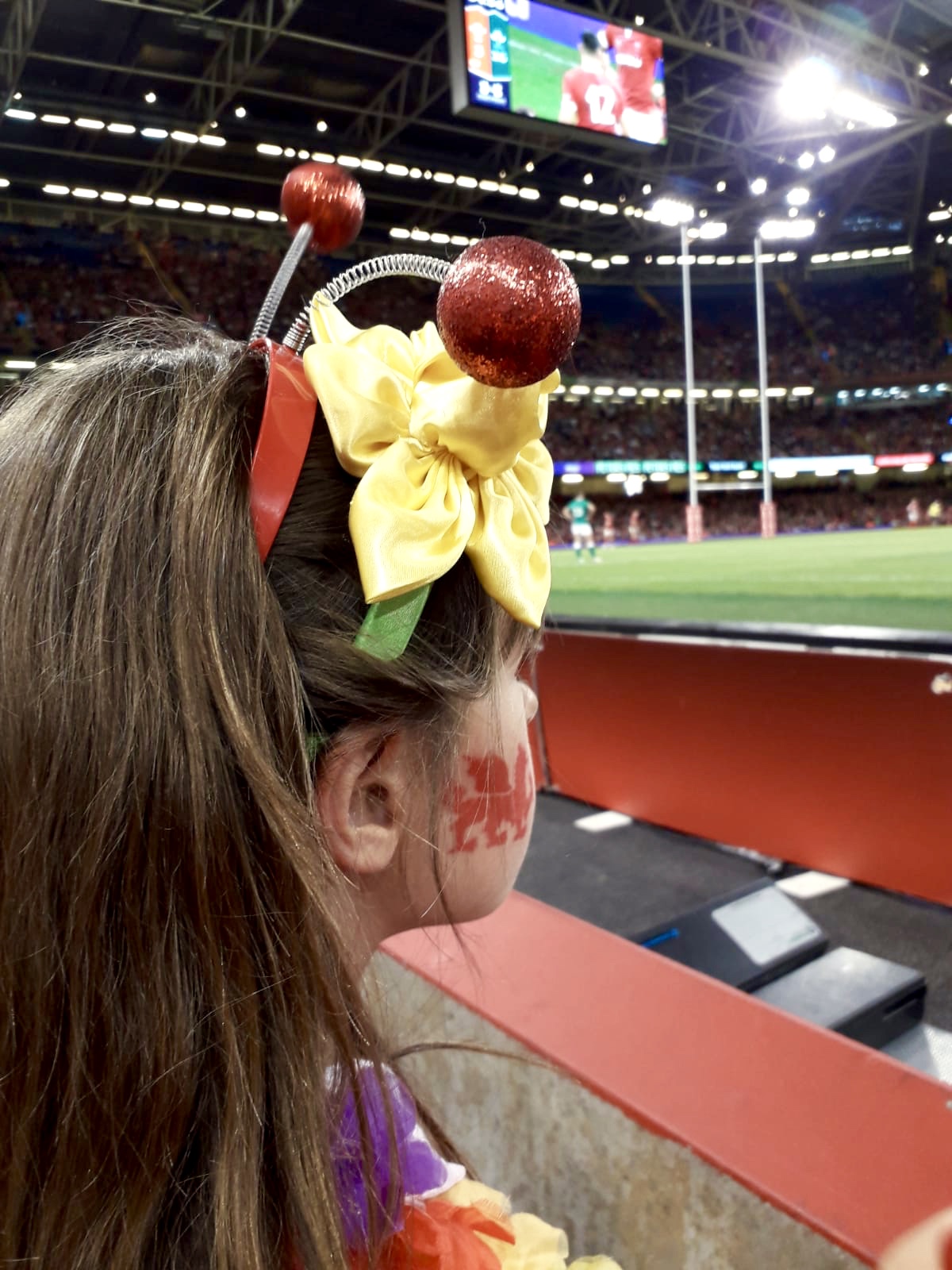 As parent of the mascot I had an official ID lanyard and everything! I got to stand right next to the tunnel as the two teams ran onto the pitch, my son holding hands with Navidi. What an incredible moment. I felt so proud seeing him standing on the pitch with the entire squad, singing Mae Hen Wlad Fy Nhadau along with the rest of the stadium. I could feel the tears in my eyes. I can only imagine how it feels when your child is actually playing for their country.

He seemed completely unfazed by the TV cameras, photographers and the entire stadium looking down on him. He tells me he felt a little bit nervous but he certainly didn’t show it. 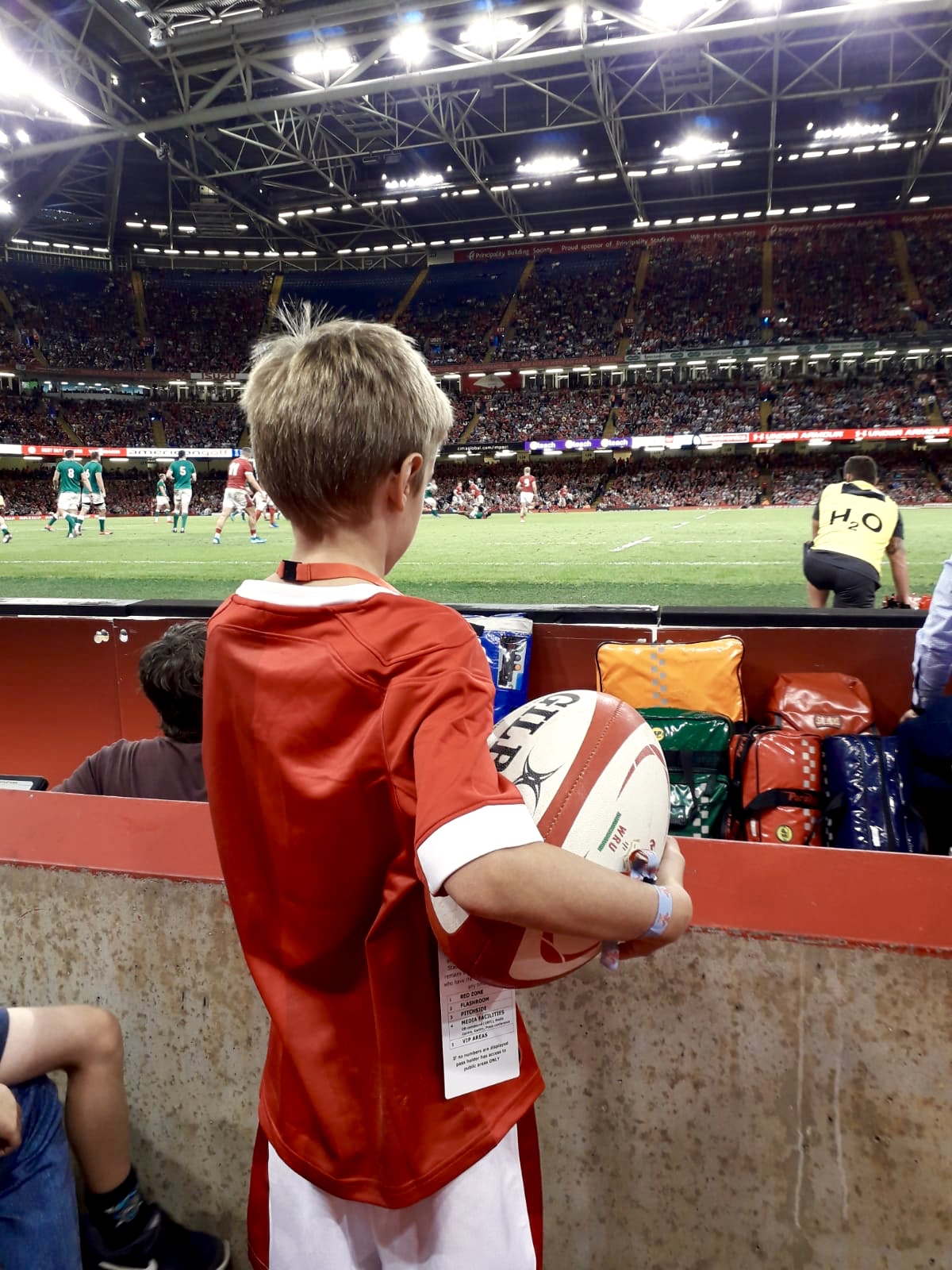 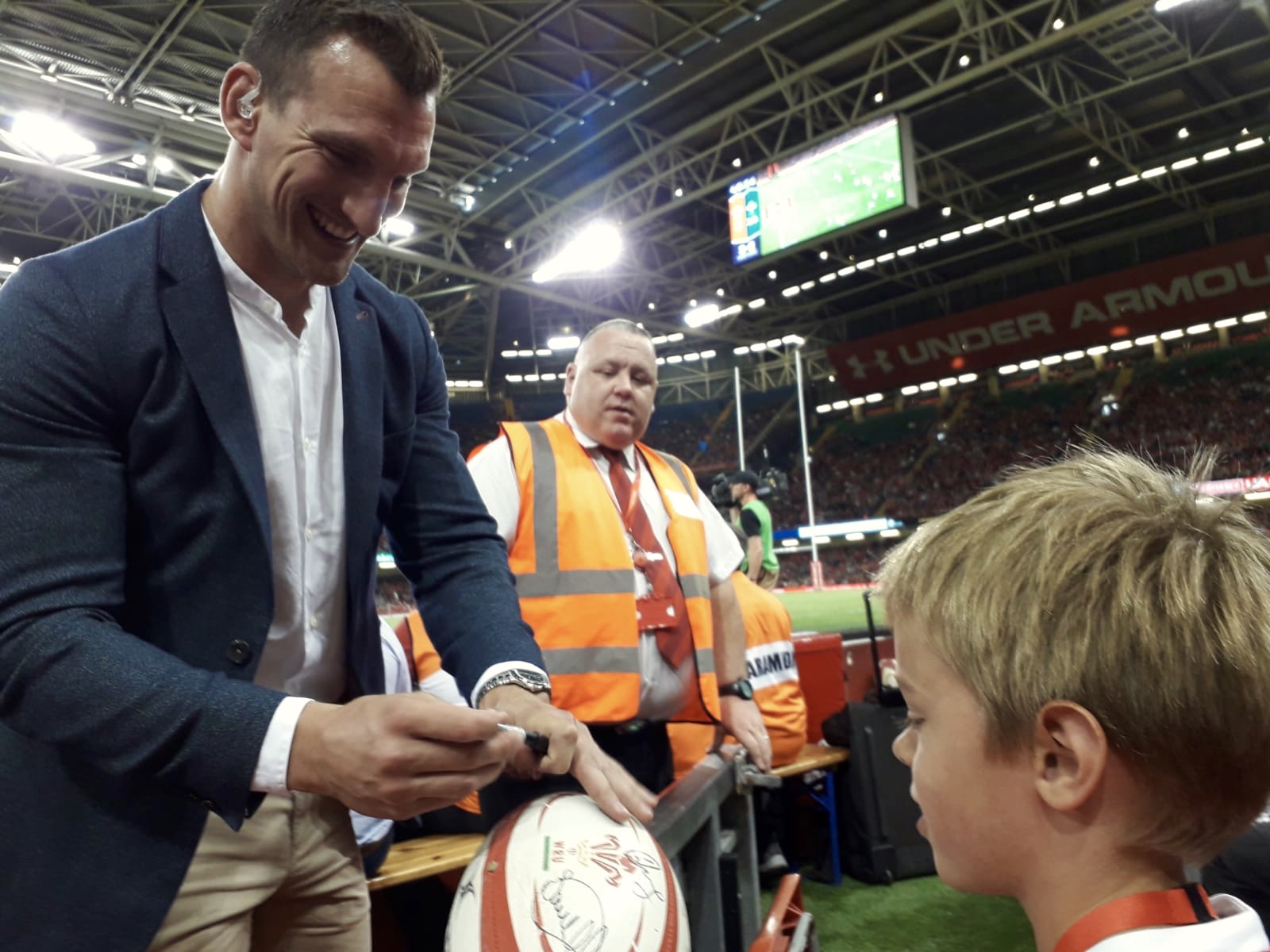 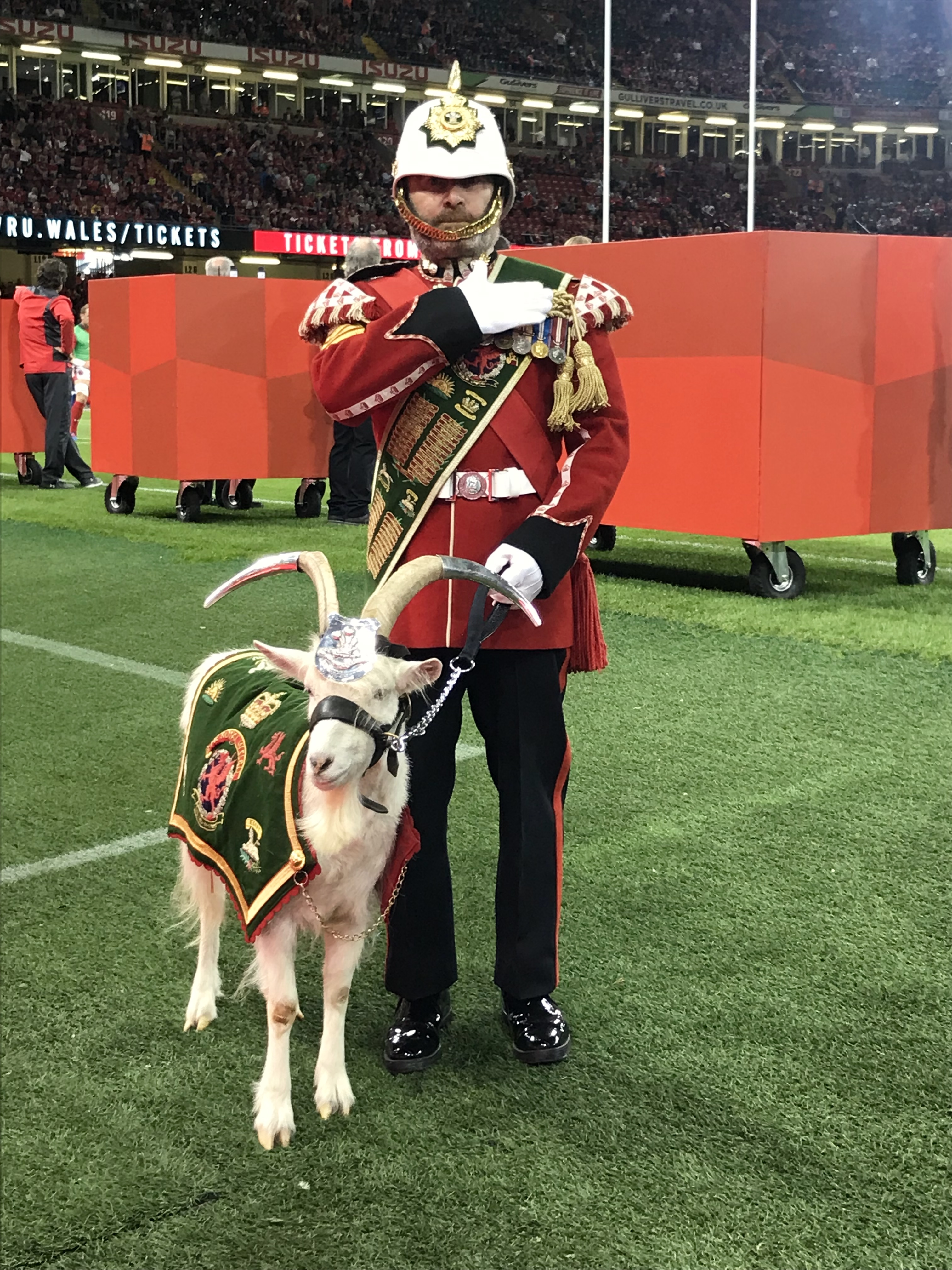 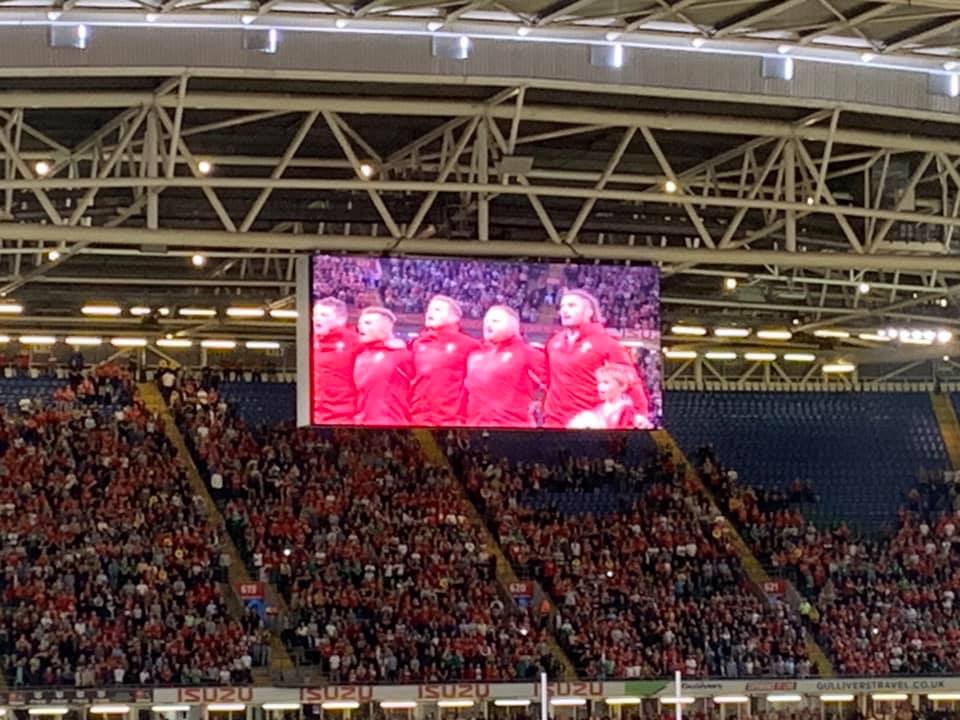 We were so lucky to be invited to have this experience by The Welsh Rugby Union – it’s the opportunity of a lifetime and something none of us will ever forget.

Running through that tunnel and meeting the players is a real dream come true for my rugby-loving son – but we were surprised to hear it’s not as impossible a dream as you might imagine. This is thanks to the WRU junior membership packages, which cost from £20 for one year or £35 for two years, and gives youngsters the chance to enter the ballot to be official mascot or ball bearer (which also comes with free tickets for the match), discounts in the WRU store, free stadium tours, and loads more. 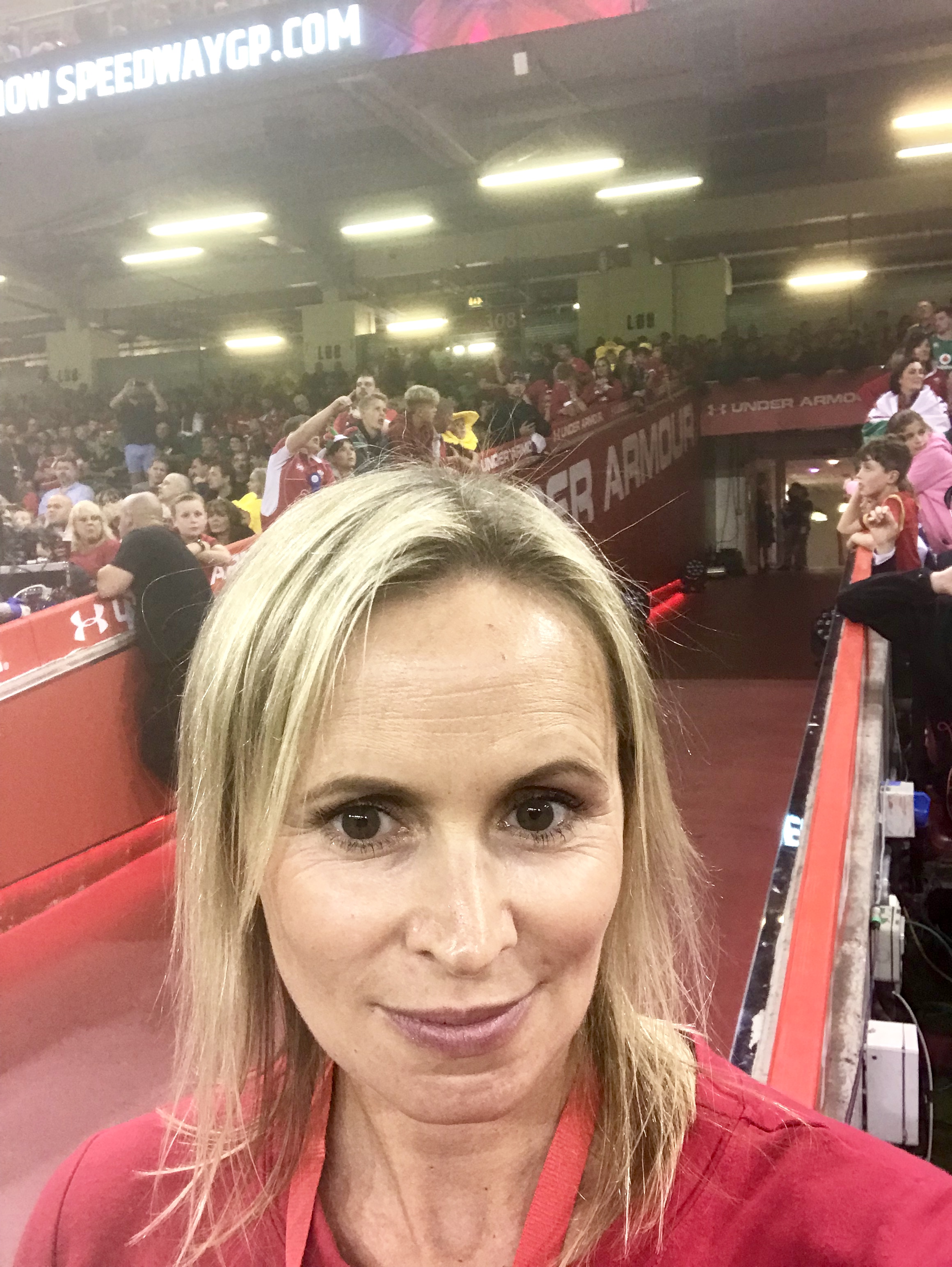 For more information on WRU junior membership and details on how to apply, visit the website here.

Homepage » Cardiff » An incredible day as mascot at Wales v Ireland, thanks to WRU junior membership