My youngest child turned three recently – and we really struggled to know what to get him as a birthday present.

We’ve not long had Christmas, so we have a house-full of new-ish toys. Plus as the third child Toddler Boy I has inherited the classic ‘big’ birthday presents such as a bike, scooter, toy garage and so on from his siblings, not to mention a whole host of other smaller toys too. He also has no interest in the typical toys for children his age, because having seen what his big brother and sister get up to, he knows the big kid toys are way more fun. As a result, we were really struggling to know what to give him.

And then I saw a photo on Mud Kitchens Cardiff’s Facebook page of a water wall – and knew it would be perfect. 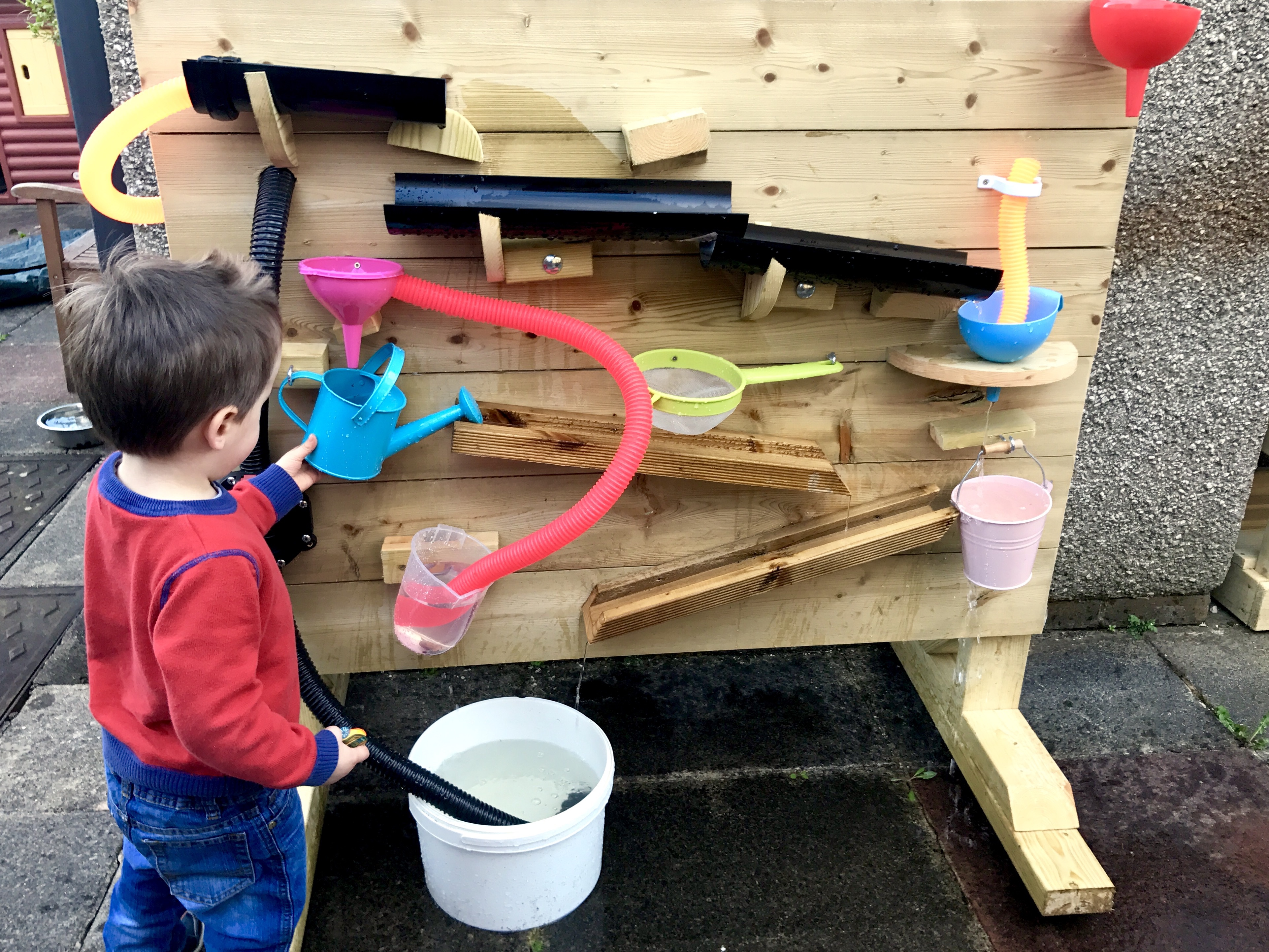 Regular readers will remember we reviewed a mini mud kitchen from Cardiff Mud Kitchens back in the autumn. It was a hit with all three of my children. They played with it constantly for the first few weeks or so after it was delivered and even though the cold¸ wet and dark Welsh winter weather has meant less outdoor play than in the warmer months, it’s still a real favourite six months on as the create mud pies, flower potions and all have fun in their little pretend café.

The water wall I’d seen was designed for a school and was way out of our price league, not to mention huge in size. However, knowing that local carpenter Craig Hill, who founded Mud Kitchens Cardiff, is continually expanding his range of products, I asked him if he’d be interested in coming up with a smaller water wall for domestic use, at a more affordable price.

He was more than happy to take me up on the challenge… and also my other challenge of making sure it doesn’t waste water unnecessarily.

We were thrilled with the result. The water wall has been a big hit with not only Toddler but his siblings too, and I know all three of them will be playing with it for years to come. 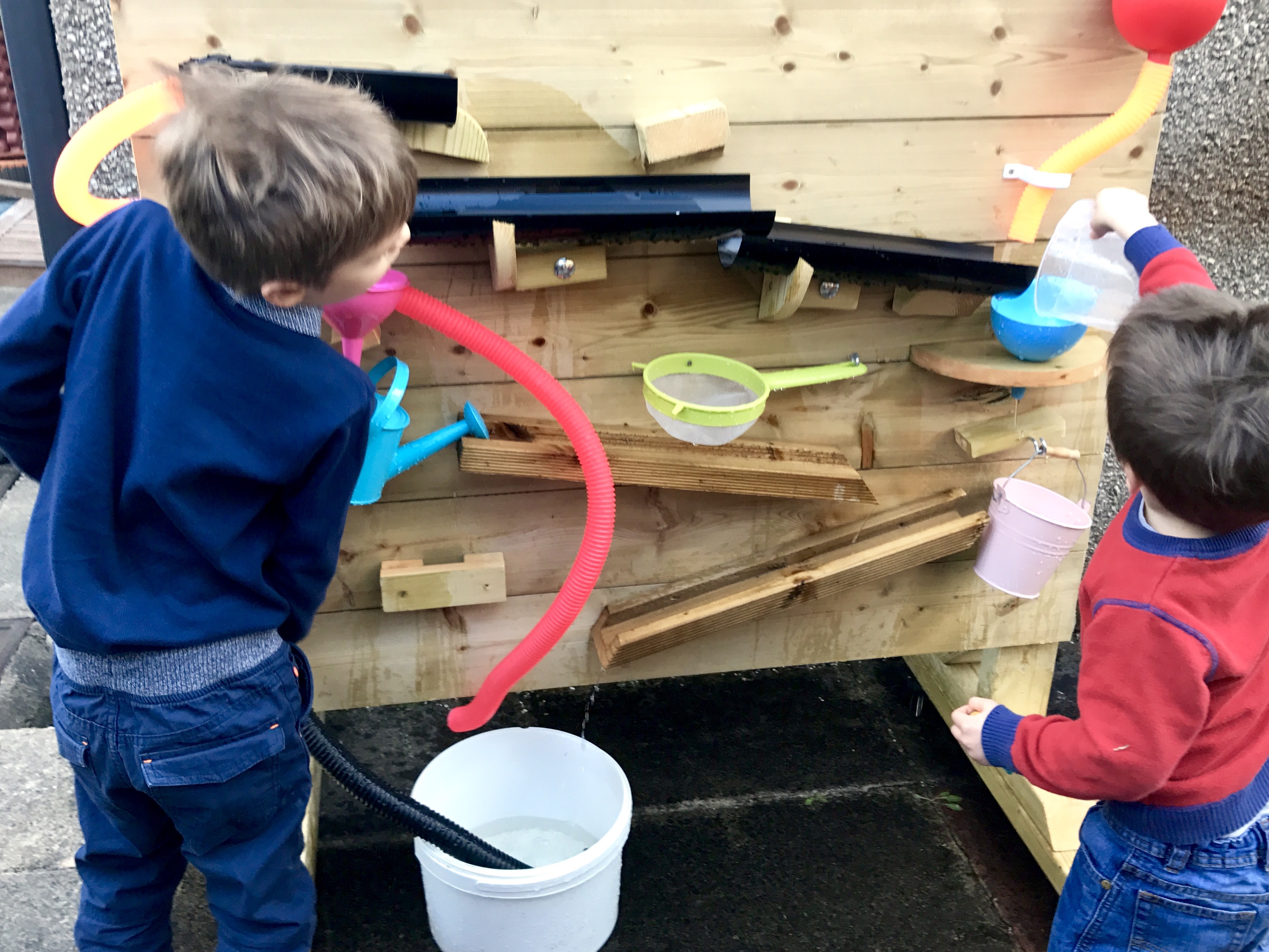 The wall is 1.2m high by 1.2m wide. The feet mean it stands away from the wall, rather than flush, which makes it seem bigger than it is, but the whole product feels so sturdy and well-made. Indeed, with three young kids and their friends playing with it, not to mention the Welsh weather, it needs to be strong. Given how well our mud kitchen is doing six months on, I have no qualms about the quality of the water wall. It’s not cheap at £280, but it’s a toy that I know will last for years and the quality is fantastic.

As with the mud kitchen, the water wall is made from pressure-treated tanalised timber (to prevent rot), is really sturdy. The feet means that it won’t absorb too much water from being flush against the floor.

The day of Toddler’s birthday was pretty hectic with a party and family visiting. We gave him some smaller presents in the morning, but knowing how excited he would be by this, and how wet he’d probably end up, we kept it hidden in the garden until the early evening when we knew he’d have time to play on it properly. 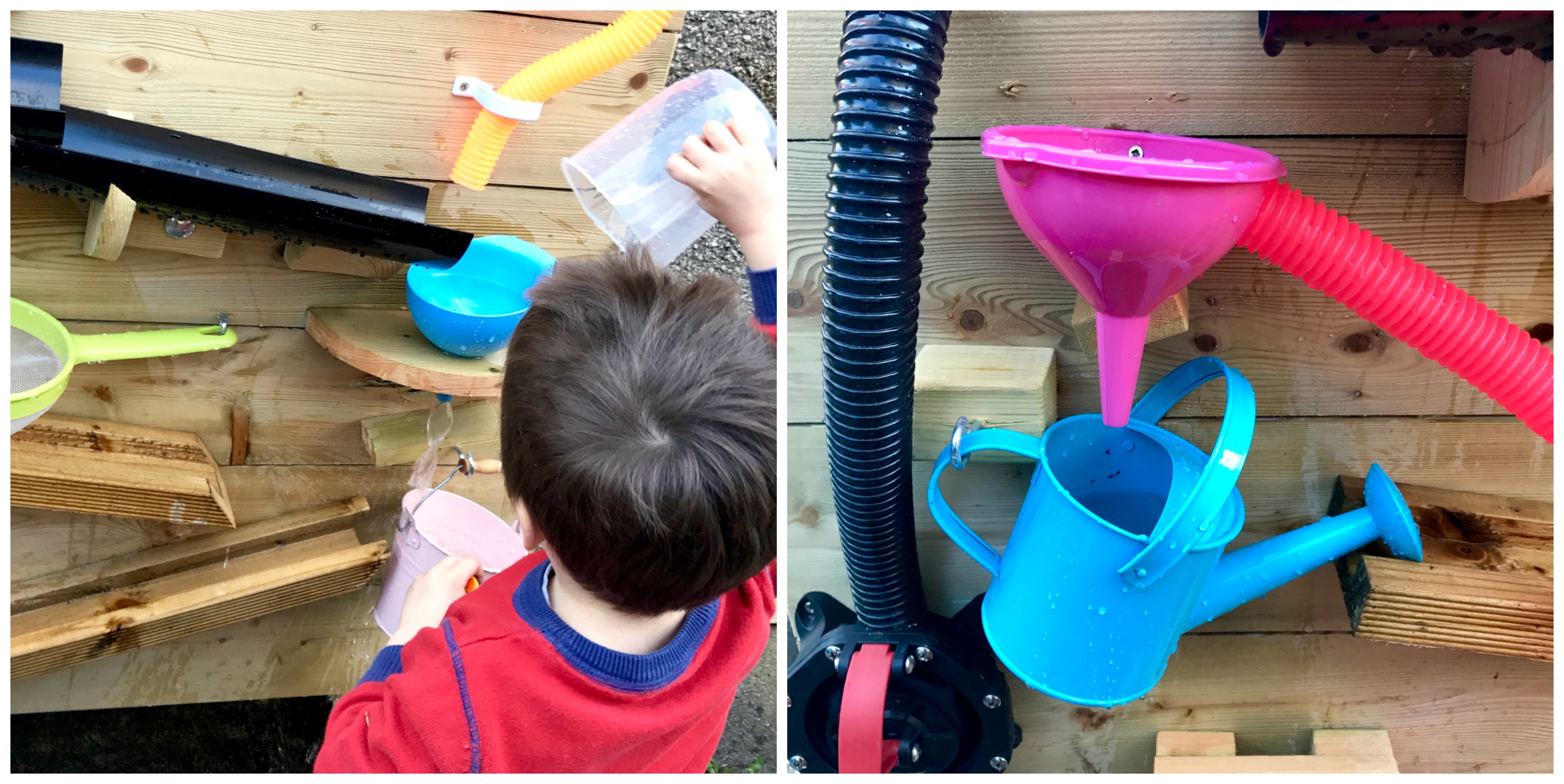 When we finally showed Toddler his gift, it was with an excited entourage of his sister and brother aged 7 and 5, and four of their cousins, aged 4, 5, 8 and 12.

It was a resounding success with all seven of them. Although there’s no way my 12-year-old nephew would request something like this for himself now, he was intrigued by the mechanics of it all, and loved showing the younger cousins how it all worked.

Five-year-old Little Man O soon worked out that he could angle one of the pipes to squirt Mummy with the hand pump, whereas Toddler loved filling and filling and tipping the bucket.

As a former teacher in both primary and secondary schools, as well as a father of three, it’s clear that Craig has thought about the educational aspects of the wall, as well as the aesthetics from a carpentry point of view.

He founded Mud Kitchens Cardiff because he was frustrated that so many school children were not getting the opportunity for outdoor play because their schools could not afford to buy the equipment. It’s clear a great deal of thought has gone into all of his products, and the water wall is no exception.

It’s really easy to use. A hand pump draws up water from a bucket of water on the floor. There are watering cans and cups which tip when they are full, a sieve and a funnel, encouraging children to experiment with cause and effect.

As per our request, the water flows naturally between the various activities on the board, containing the water as much as is possible. Inevitably there is some spillage, but we’ve been trying to be as eco-friendly as possible by collecting rain water to use, rather than the tap.

Craig has suggested the water wall can also be used as a marble run, which we have yet to try out, but which I’m sure my children will enjoy.

We’re currently having plenty of fun with the water.

I should probably add that every time my children have played with the new water wall they’ve ended up getting wet and needing a change of clothes.

And, to me, that just means the structure is doing its job.

The dirty and wet clothes can be washed and dried… but the memories of the fun they’ve had will last. 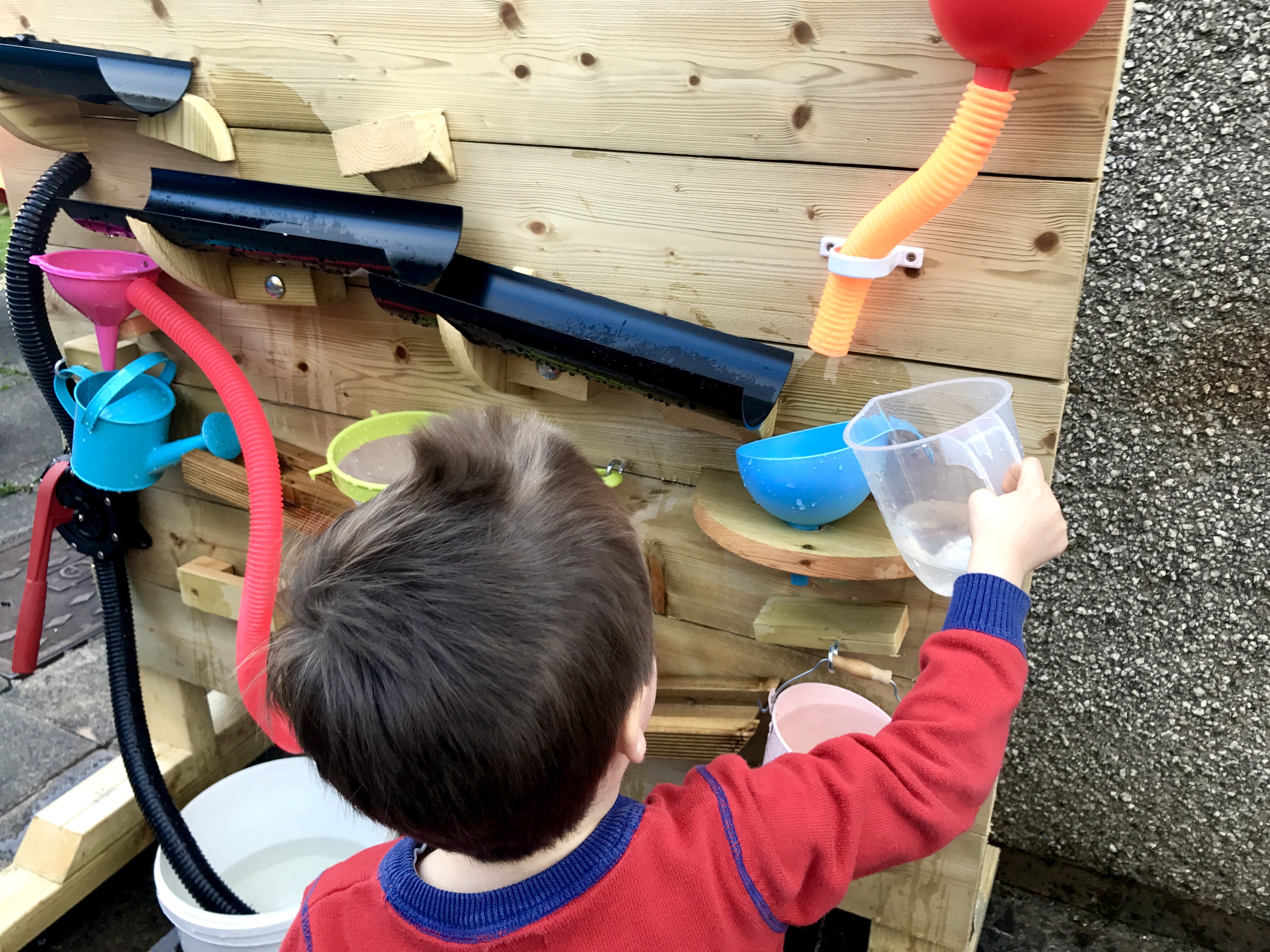 Craig is offering a 10% discount for Cardiff Mummy Says readers on orders of all products made before 30th April 2017.

Also check out their crowdfunding campaign Little Acorns Initiative to provide mud kitchens for local children who are living in difficult circumstances, through no fault of their own. The crowd funding pays for the materials and Craig provides the build for free.