One of my favourite places to visit in Cardiff is Coed y Wenallt during bluebell season. The ancient woodland becomes a breathtaking carpet of purpley-blue, for just a few short weeks while the flowers are in bloom.

We have headed to this beauty spot as a family every bluebell season for the past few years with this year being no exception. I also had a sneaky additional visit with my two boys earlier in the week because the sun was shining, our plans for the day had been unexpectedly cancelled, and I know it will only be a matter of days until the magical flowers are gone for another year. 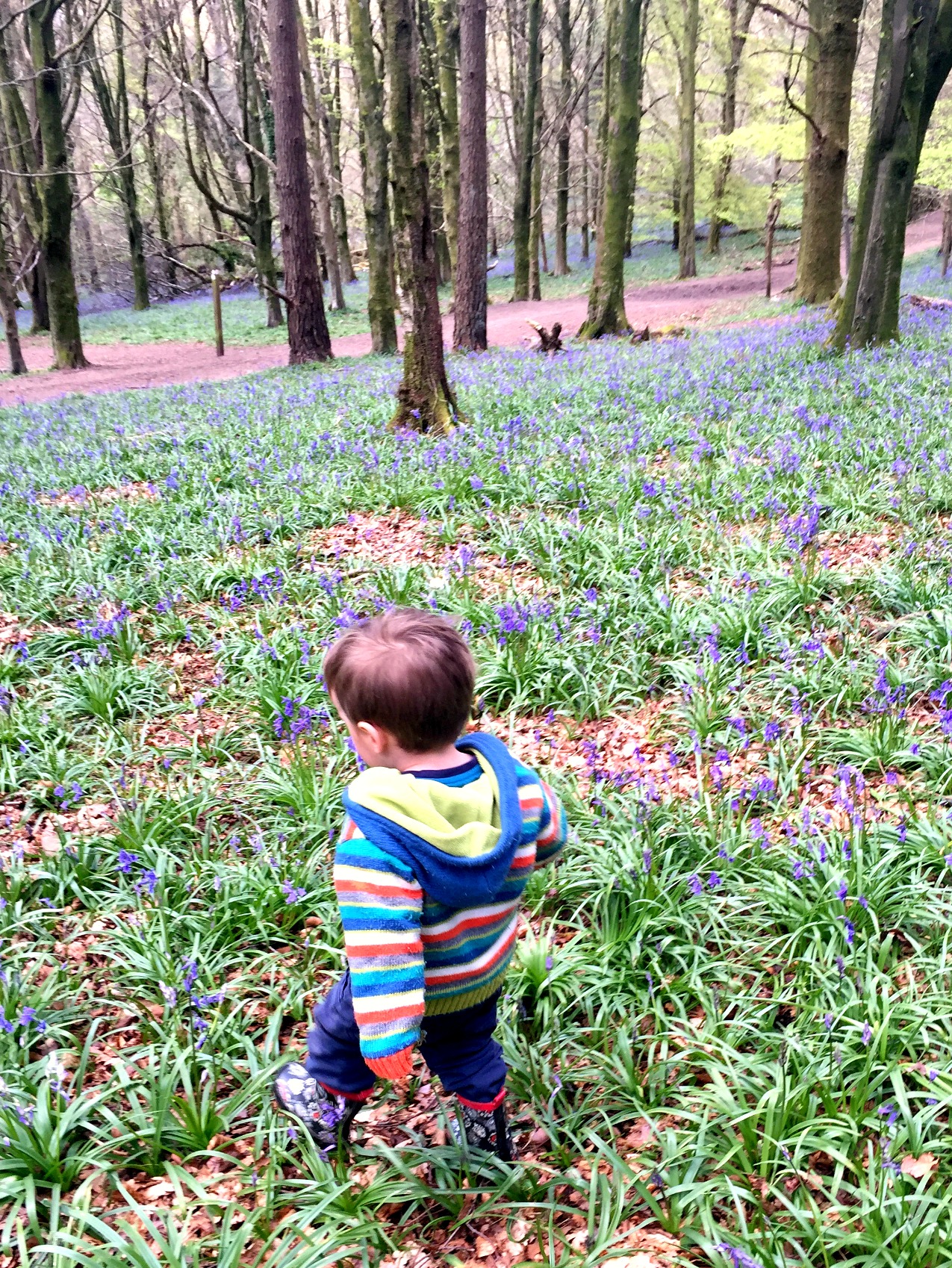 When I’ve mentioned the Wenallt woods previously, people have told me they haven’t been able to find it. So, let’s get the basics over with. These Wenallt woods are different to the Wenallt woods in Tongwynlais. To get to Coed y Wenallt from Cardiff, drive up Caerphilly Mountain, past The Ffynon Wen and Miller and Carter on your right and The Manor House and New House Hotel on your left. When you get to the top of the mountain, directly opposite The Traveller’s Rest pub, you’ll see an immediate left turn onto a country lane. Travel down the lane for about a mile. We tend to ignore the first car park you come across and head for the second, which is a brilliant place from which to explore the woods. It only holds about a dozen cars, so at busy times people tend to park on the lane itself. Both car parks are free and I should probably mention there are no toilets to my knowledge, which is always a consideration when out with young children! You can also access the woods through Rhiwbina, but I always travel the other way.

There is a map in the car park, which shows a couple of walking routes you can take, but it’s easy enough to navigate your way around by following the well-worn paths.

The 44 hectares of woods are on a slope, so it’s not the best place for buggies. You could probably manage parts of it, but a baby carrier or sling would be much easier. 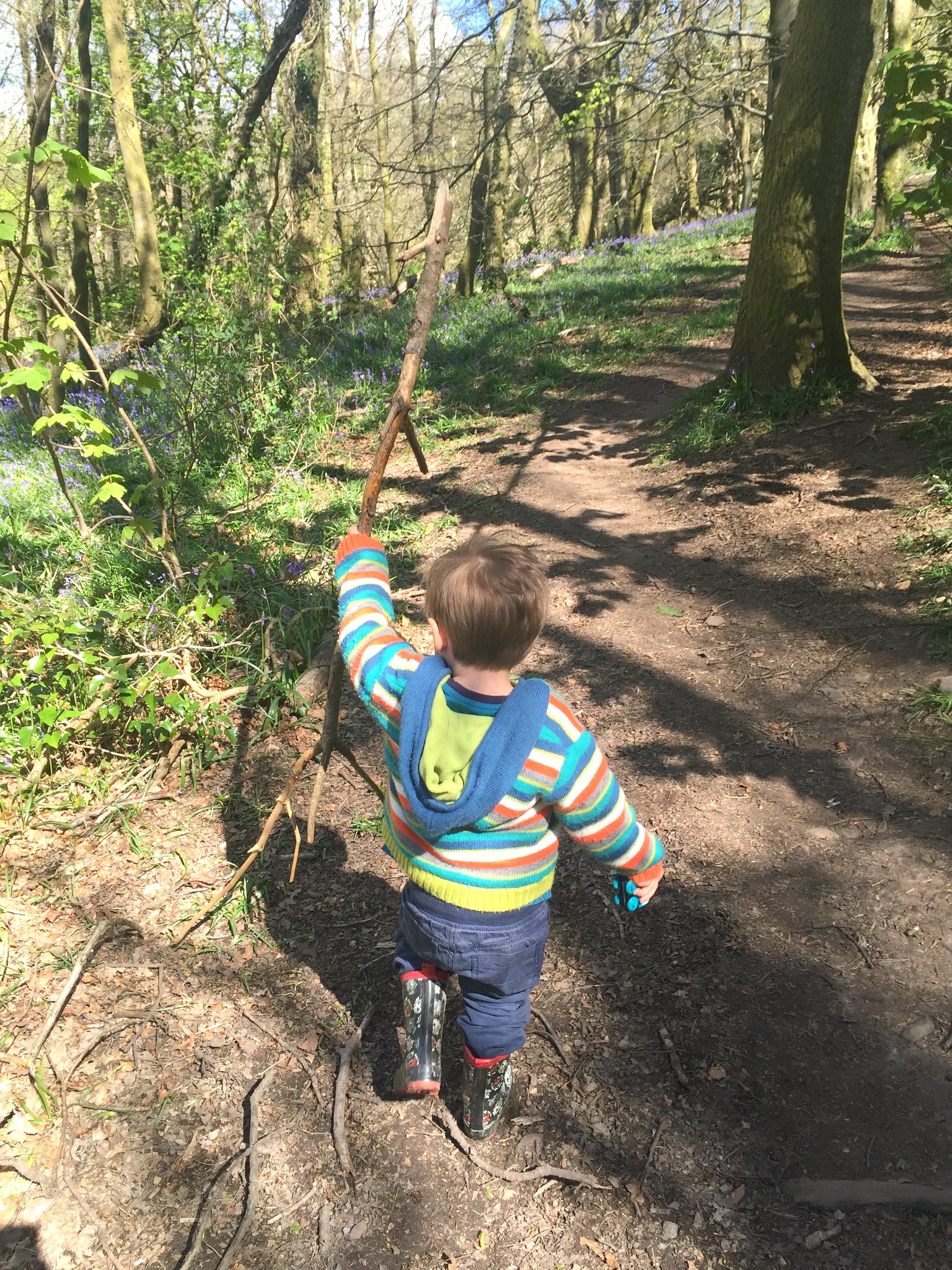 On our latest visit, Little Man O, my 4.5-year-old middle child, wanted to do a nature hunt, so we spent some time looking for woodland treasure which he could take home with him. He knows not to pick the bluebells, but we found a few that had already come away from their roots, which he happily collected. He also found some discarded bark off a fallen tree, some pinecones and a stick. He was rather pleased with his haul. 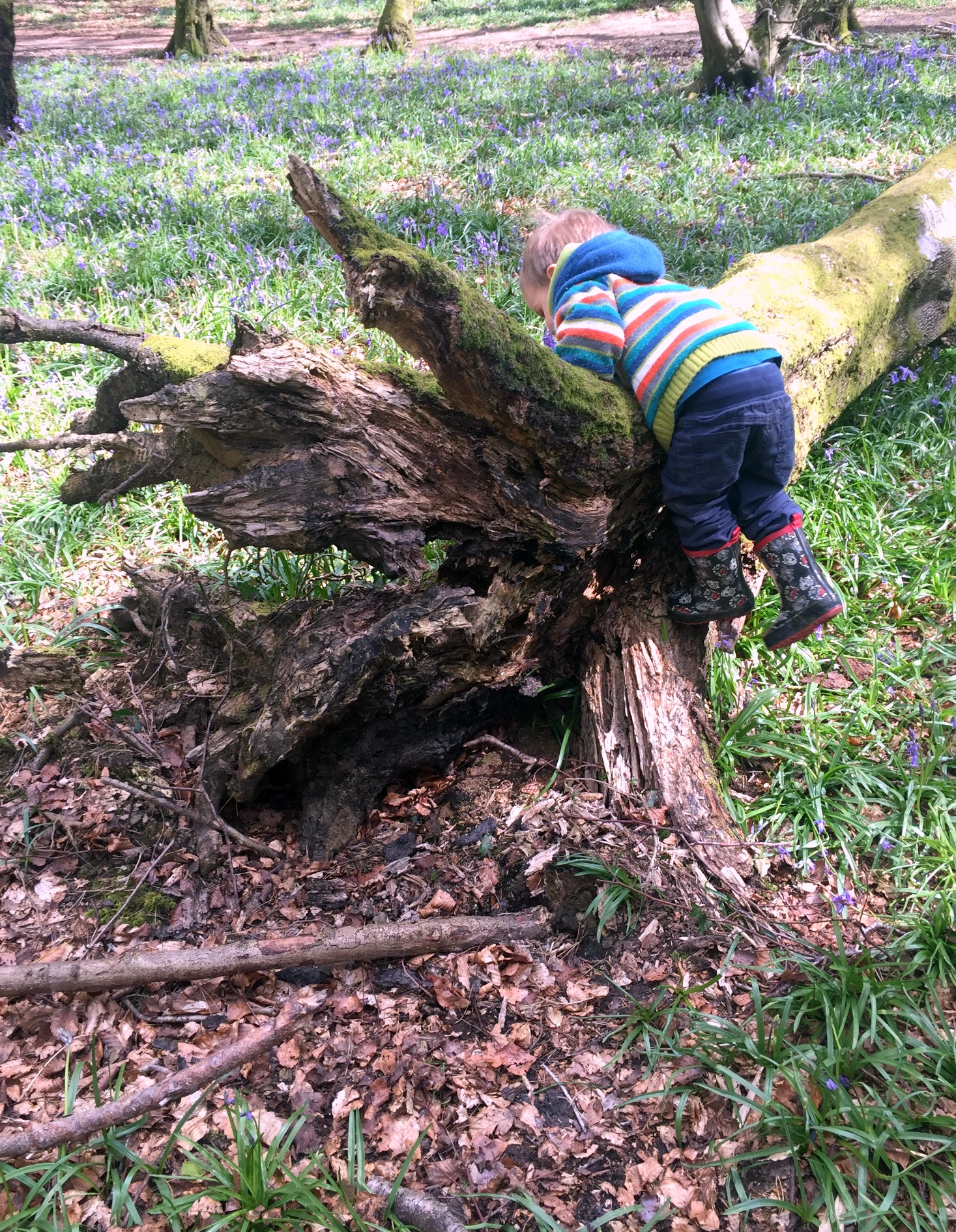 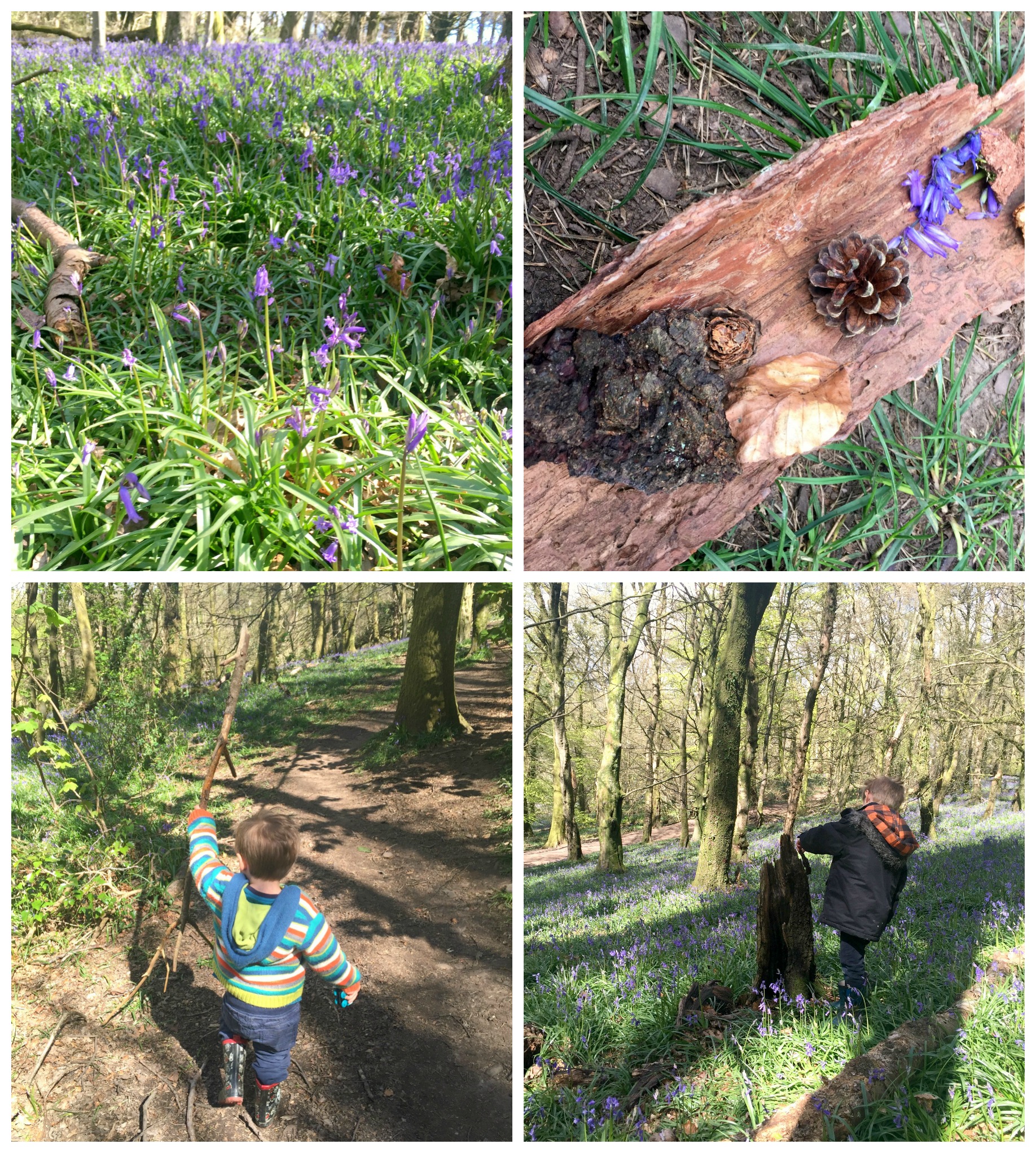 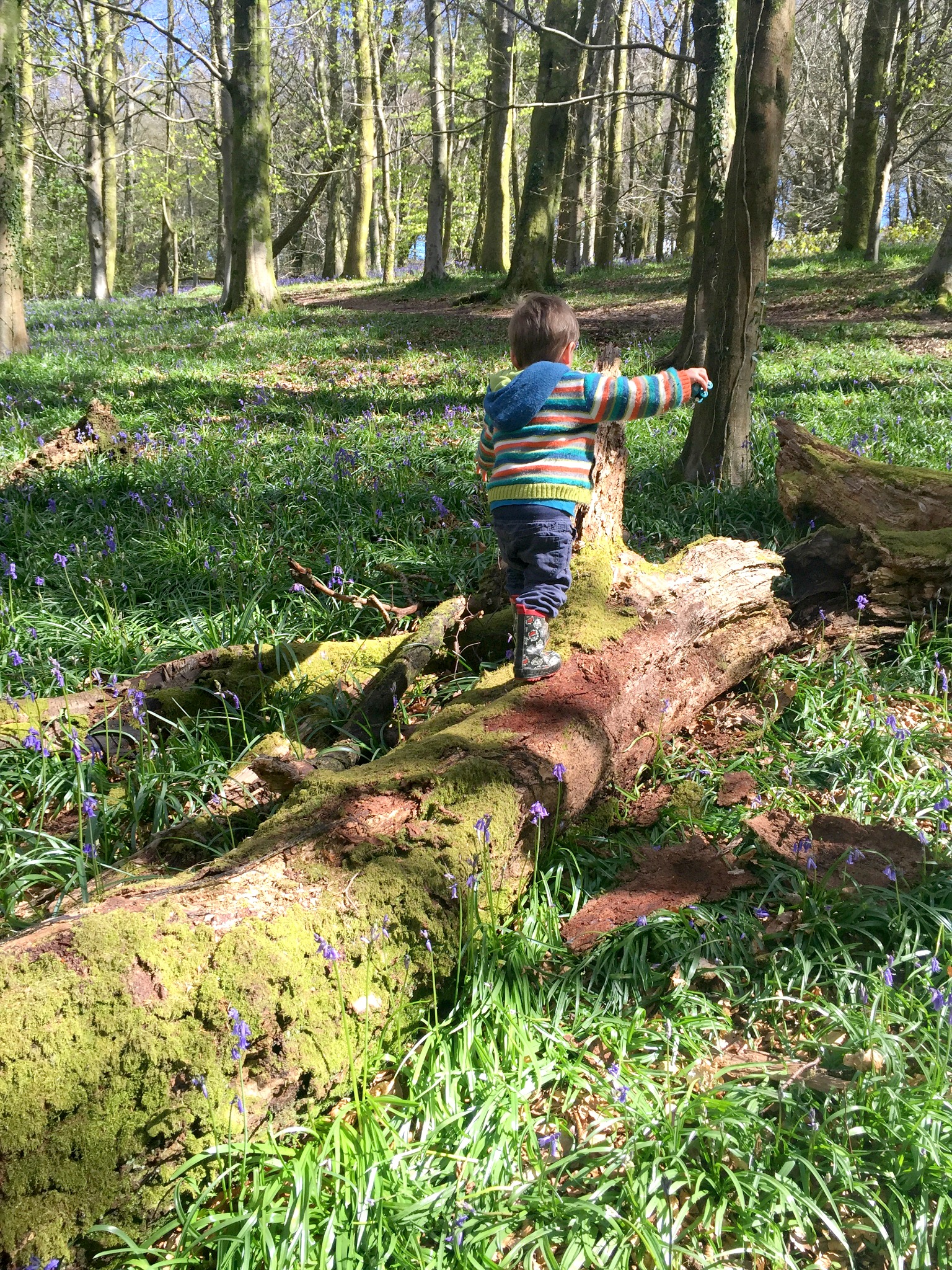 Meanwhile, Toddler Boy I, my two-year-old youngest child, had great fun running up and down the red sandstone paths. He found some fallen trees to climb on, tried his best to pick up sticks that were three times the size of him, and played peekaboo behind a tree with his big brother. He is a constant reminder to me of just how magical childhood is and that there is always an adventure to be had.

We also explored the dens that have been built in the woodland from sticks and branches, as well as looking for insects and bugs.

And, of course, we admired the bluebells, hundreds upon hundreds of them, providing a lilac glow in every direction as the sun shone down between the trees. 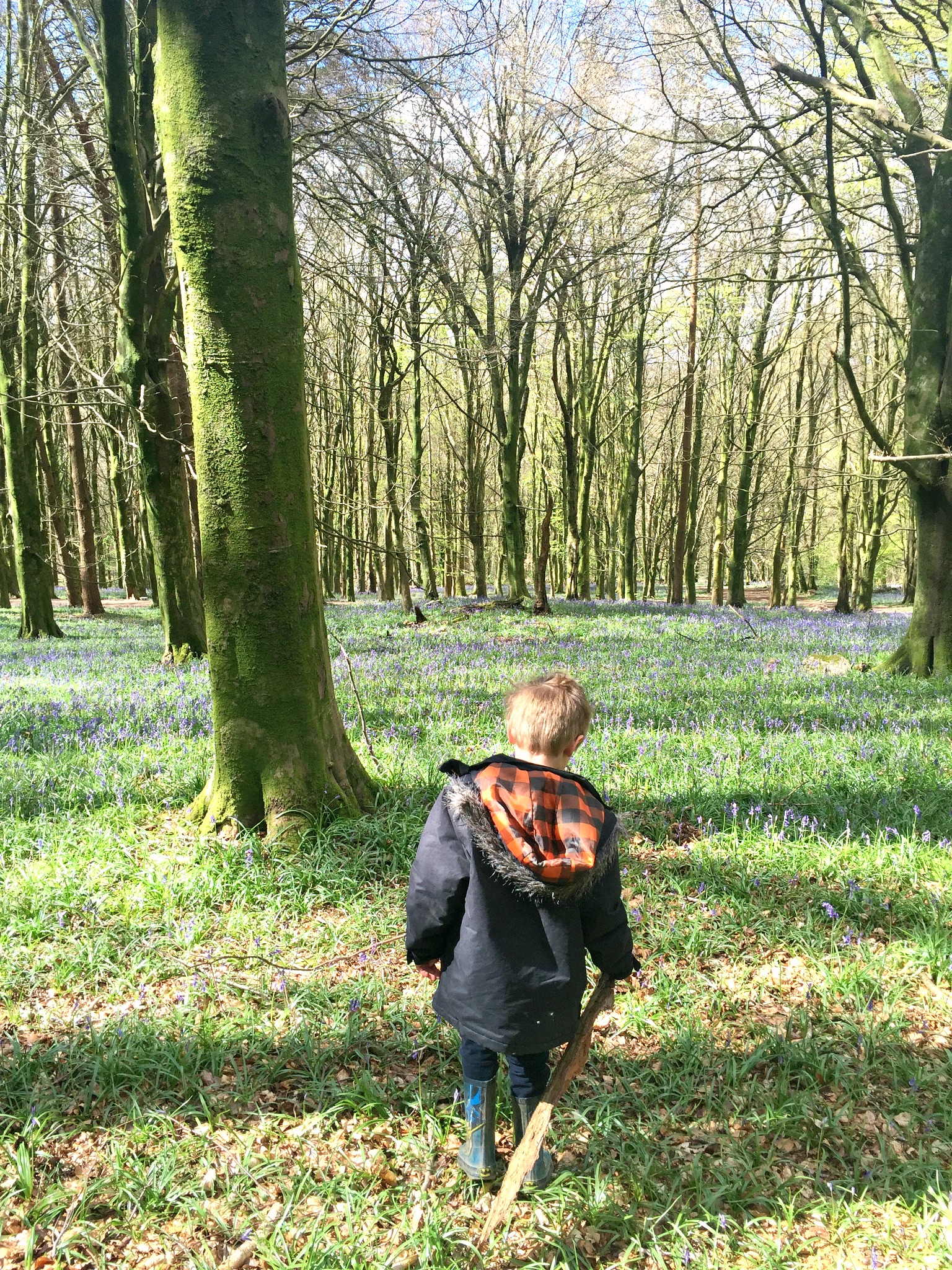 There are a couple of picnic tables next to the car park if you’re planning on staying for lunch. If it’s a clear day, it’s also worth crossing the road from the car park and looking over the fields for the most stunning views across the whole of Cardiff.

If you’re planning a trip, you’d better be quick, as they will only be there for another couple of weeks. It really is a place worth visiting though, full of the wonders of nature. 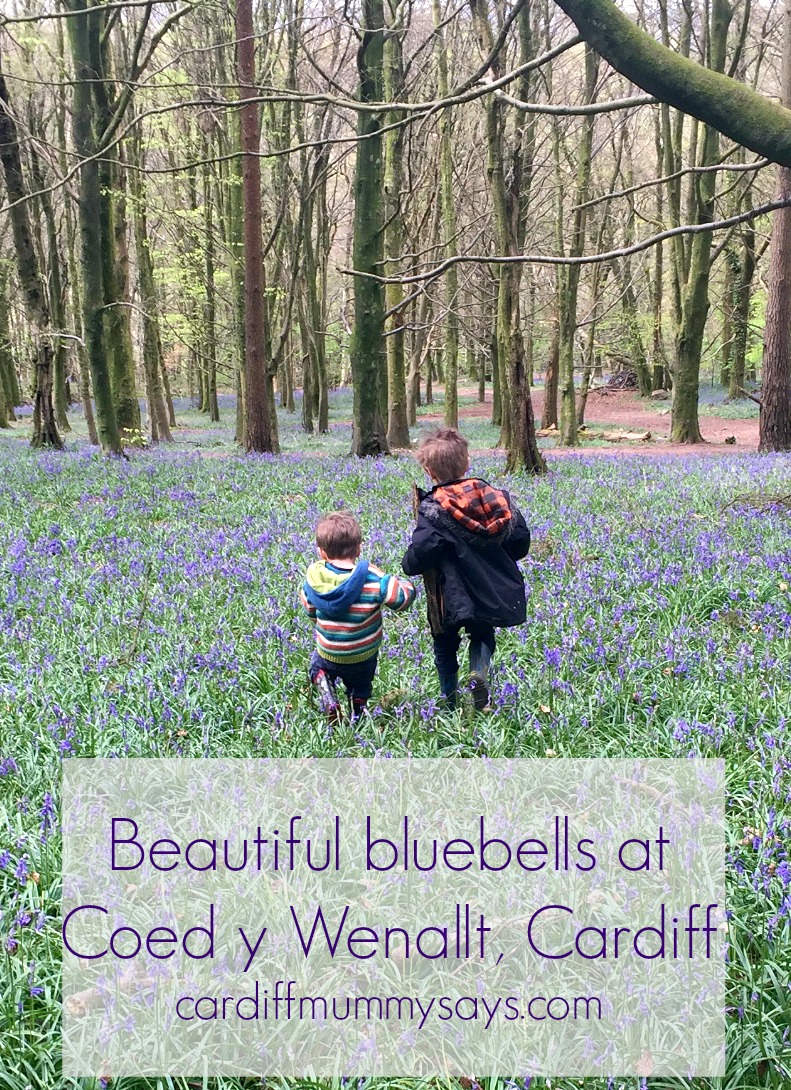 Have you been to see the bluebells at the Wenallt with your children? Do let me know in the comments section below, by tweeting me on @cardiffmummy or on the Cardiff Mummy Says Facebook page.