Situated in the green hills of Monmouthshire, Raglan Castle is the biggest castle ever built by a Welshman and one of the last medieval castles to built in England and Wales. It was home to Henry Tudor among others, and played its part during the Civil War, with some 800 soldiers holding out against Oliver Cromwell’s army for 13 weeks.

It’s certainly an impressive structure, with a moat, a three-tier gatehouse, turrets, spiral stone staircases, slotted windows for shooting arrows, plus a bowling lawn with the most incredible views over the surrounding areas.

And, as of a couple of weeks ago, the castle is also home to an impressive array of eight wooden and metal sculptures portraying the castle’s eccentric past.

As part of our role as blogger ambassadors for Cadw, we visited Raglan Castle on Sunday morning, keen to find as many of the sculptures as we could and to discover more about the castle’s intriguing past. 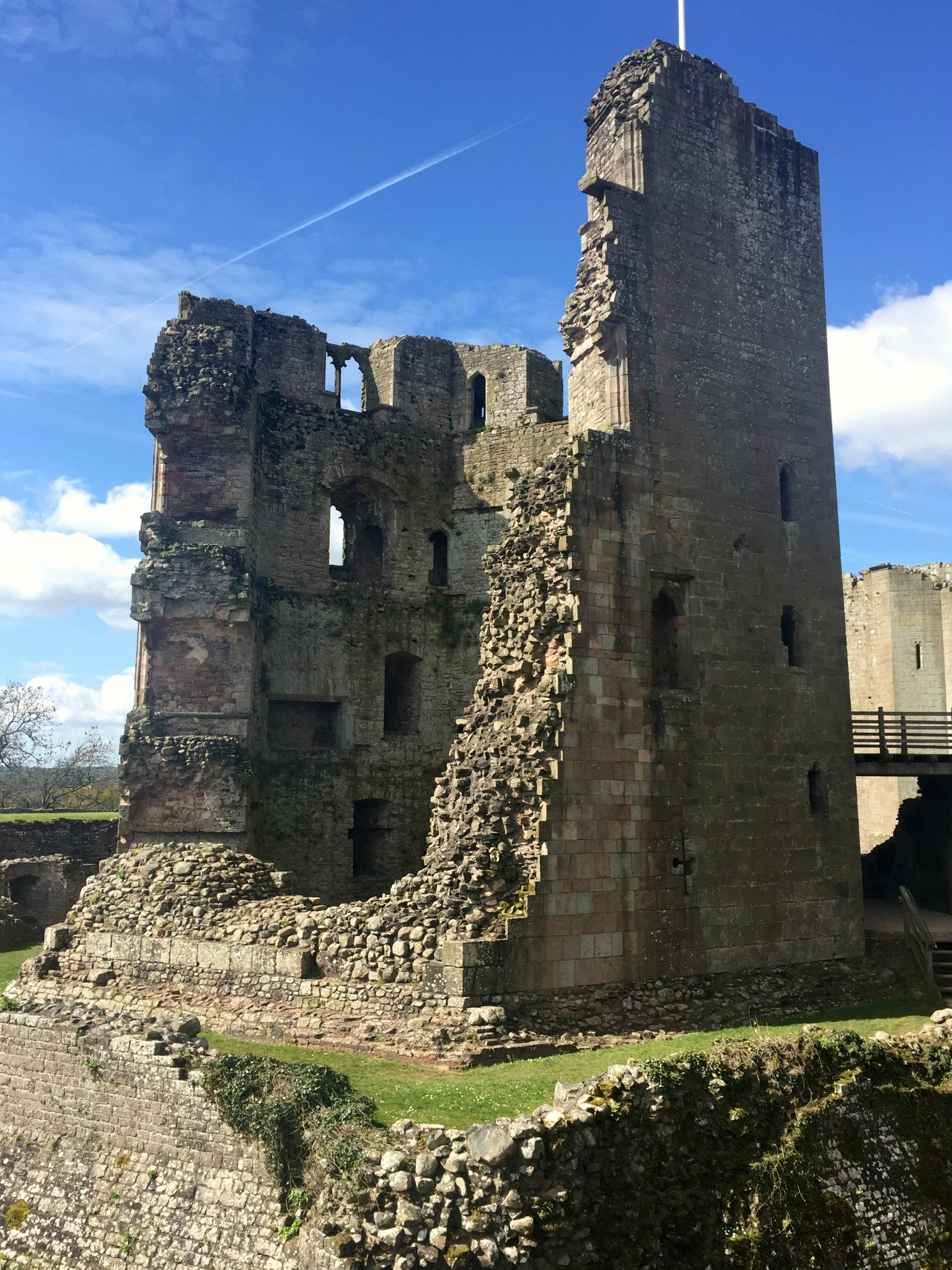 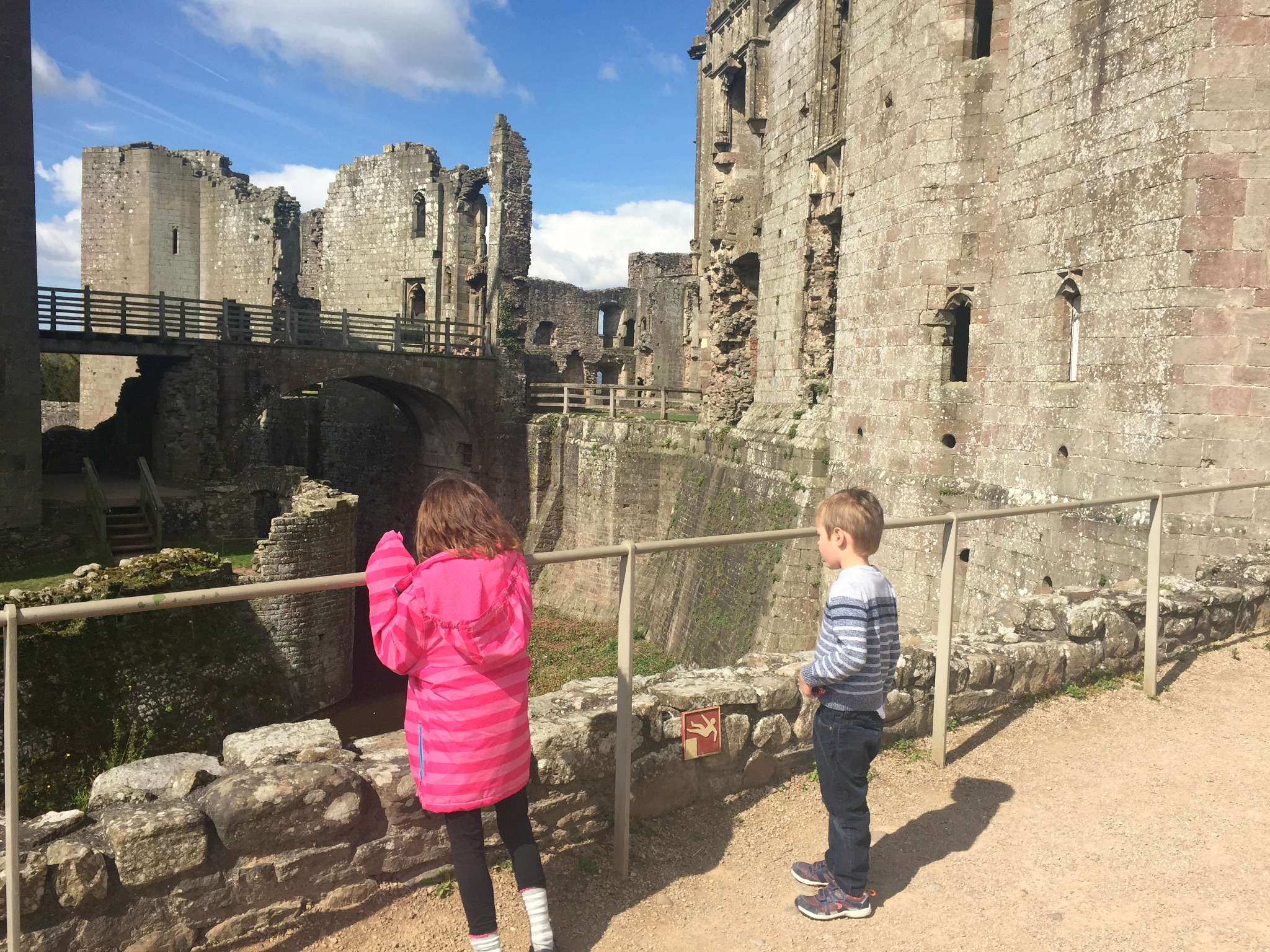 During the middle of the 17th century, the castle was home to ‘Edward the Inventor’, otherwise known as Edward Somerset, the second marquess of Worcester. He famously built his ‘water commanding machine’ in the castle’s Great Tower. Detailed in his famous book, Century of Inventions, this was one of the world’s first invented steam engines. Witnesses claimed it pushed water to a height of 40m.

Edward’s inventions form the basis of the new sculpture trail around the castle, with visitors being asked to work out which inventions are real and which are not. 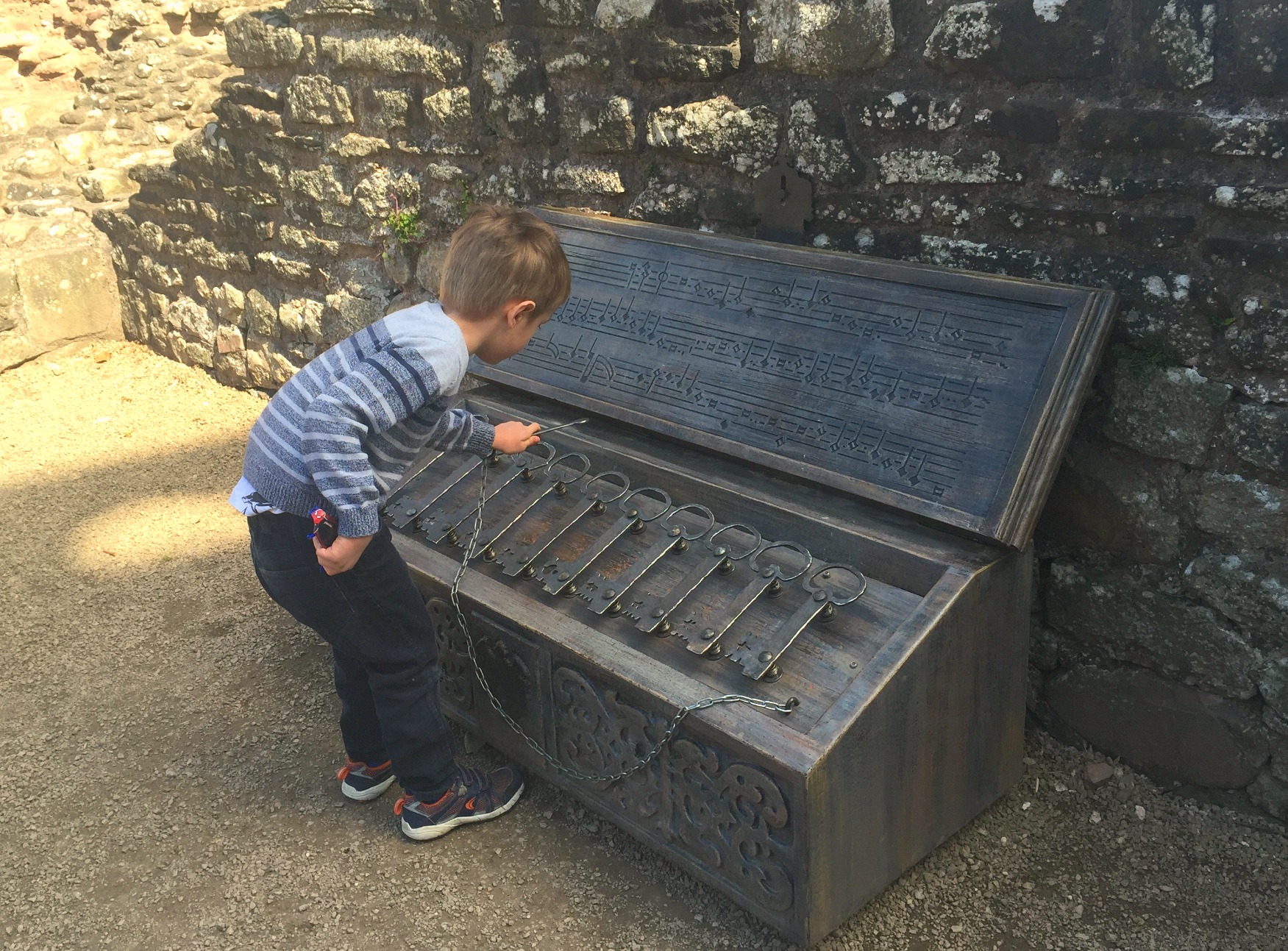 We’d only been inside the castle for a minute or two when my children found this medieval glockenspiel-type ‘keyboard’ instrument. In fact, they could hear it being played before they saw it, and were so intrigued by the noise they made a bee-line for it, excitedly waiting their turn before they could hit the key-shaped metal beater against the keys, the plinky-plonk sound resonating around the castle. 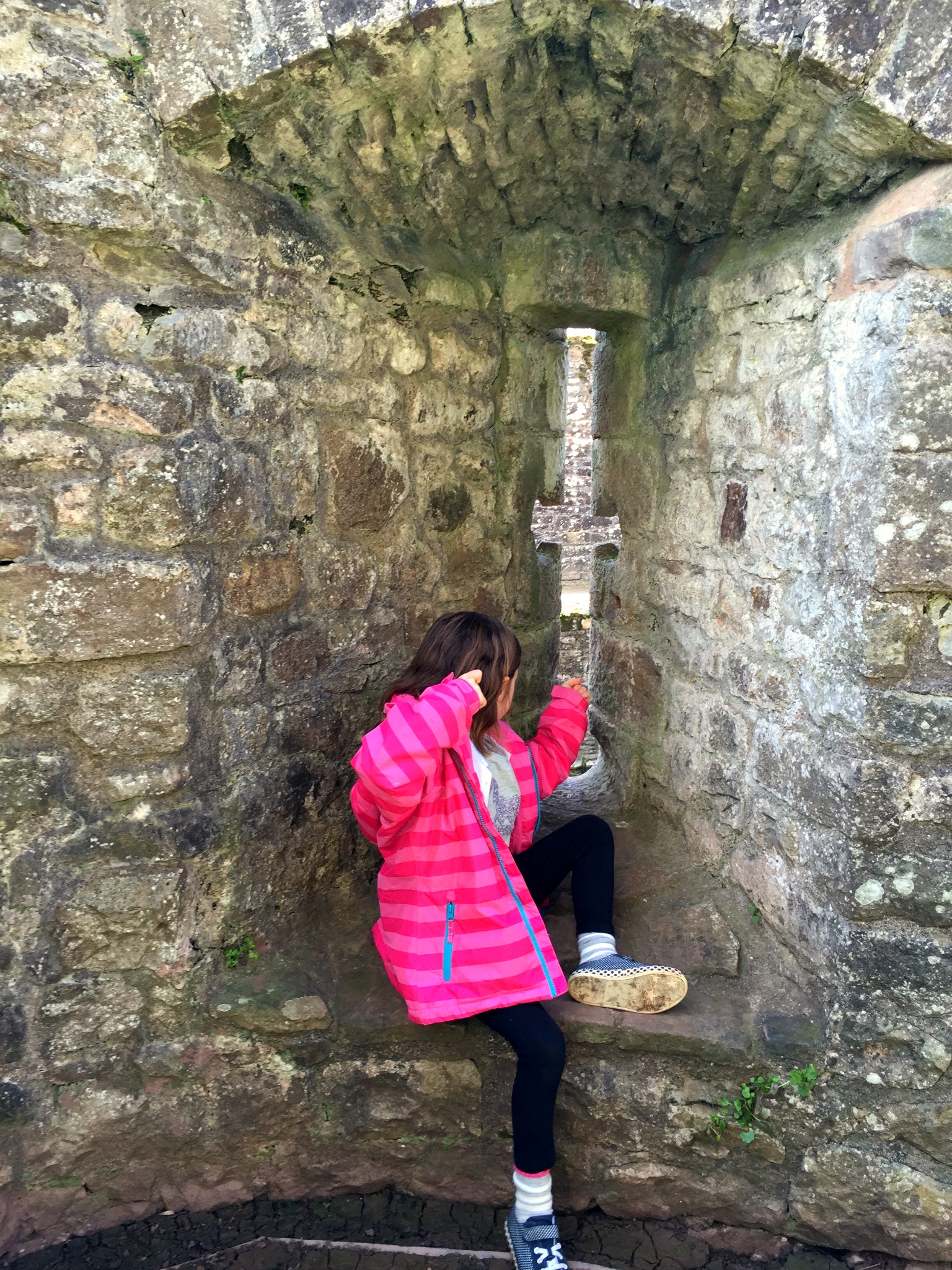 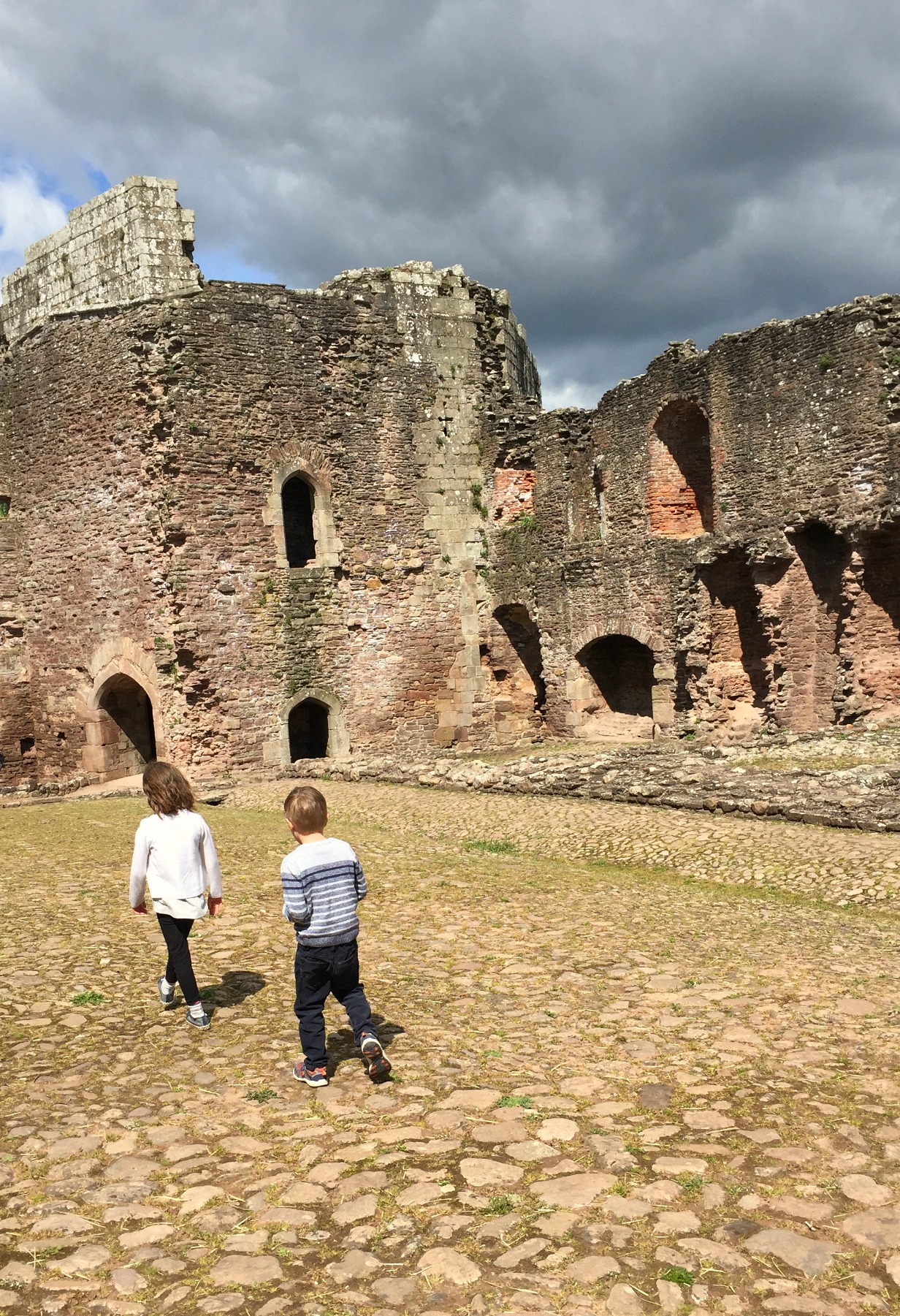 From there, they enjoyed exploring the main courtyard of the castle, the stones on the ground marking out where different rooms once stood. Although a great deal still remains intact, a lot of the walls have fallen into ruin and one can only imagine the full glory of this castle in its prime.

From there, we visited the room which once housed the library, where we discovered an intriguing book sculpture, which Little Miss E, my six-year-old bookworm loved; and the dining room with its incredible window frame and large wooden chair sculpture, where the arm straps made us wonder if it was some kind of torture device. 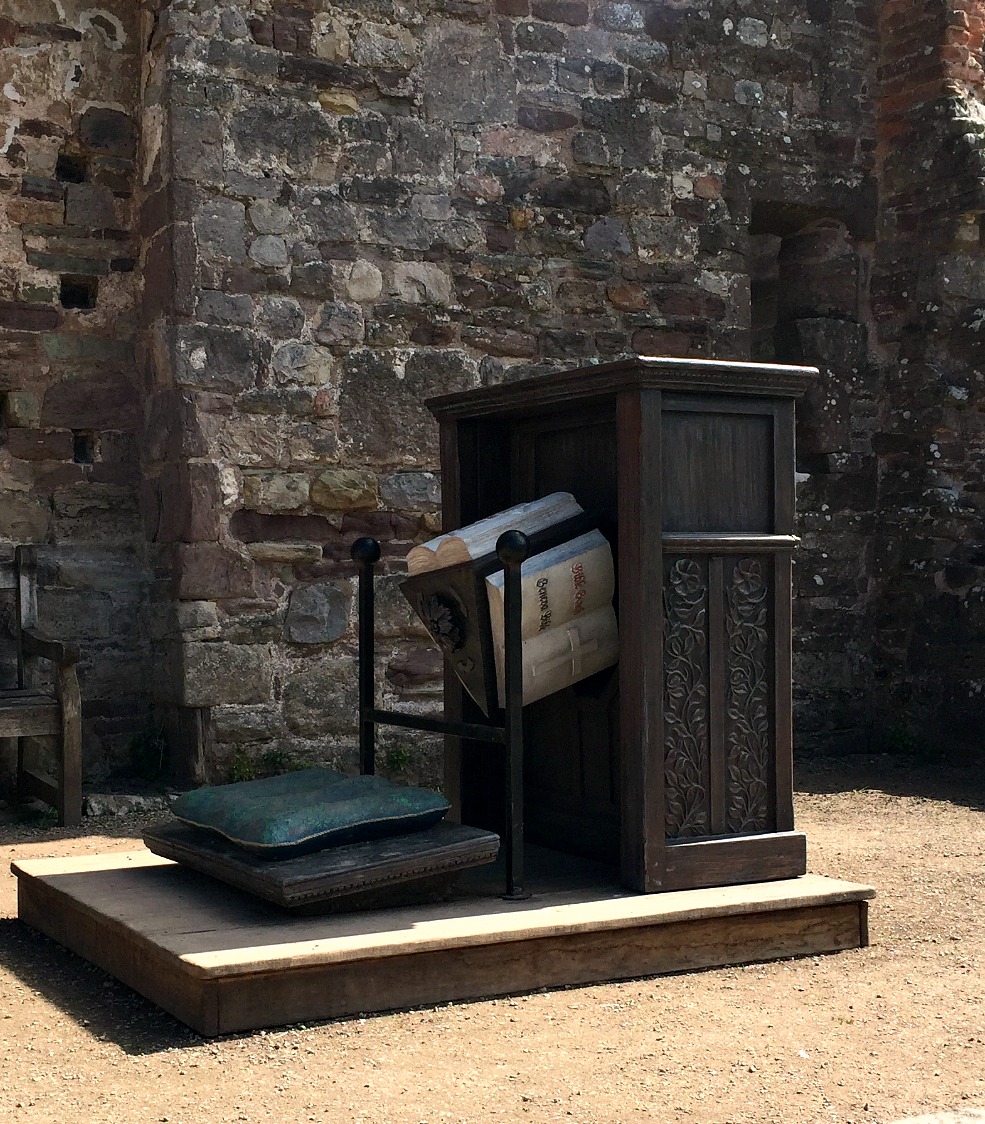 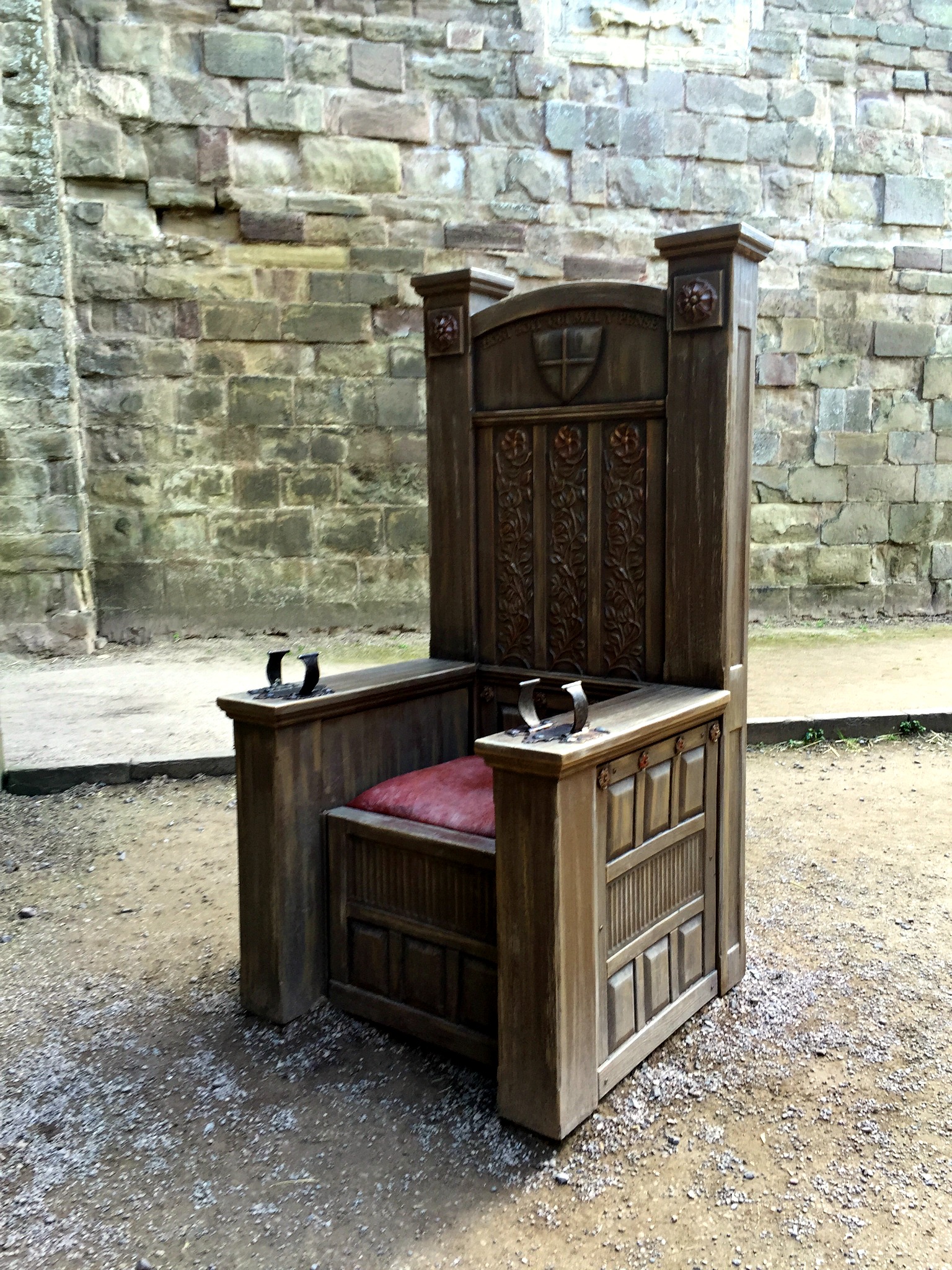 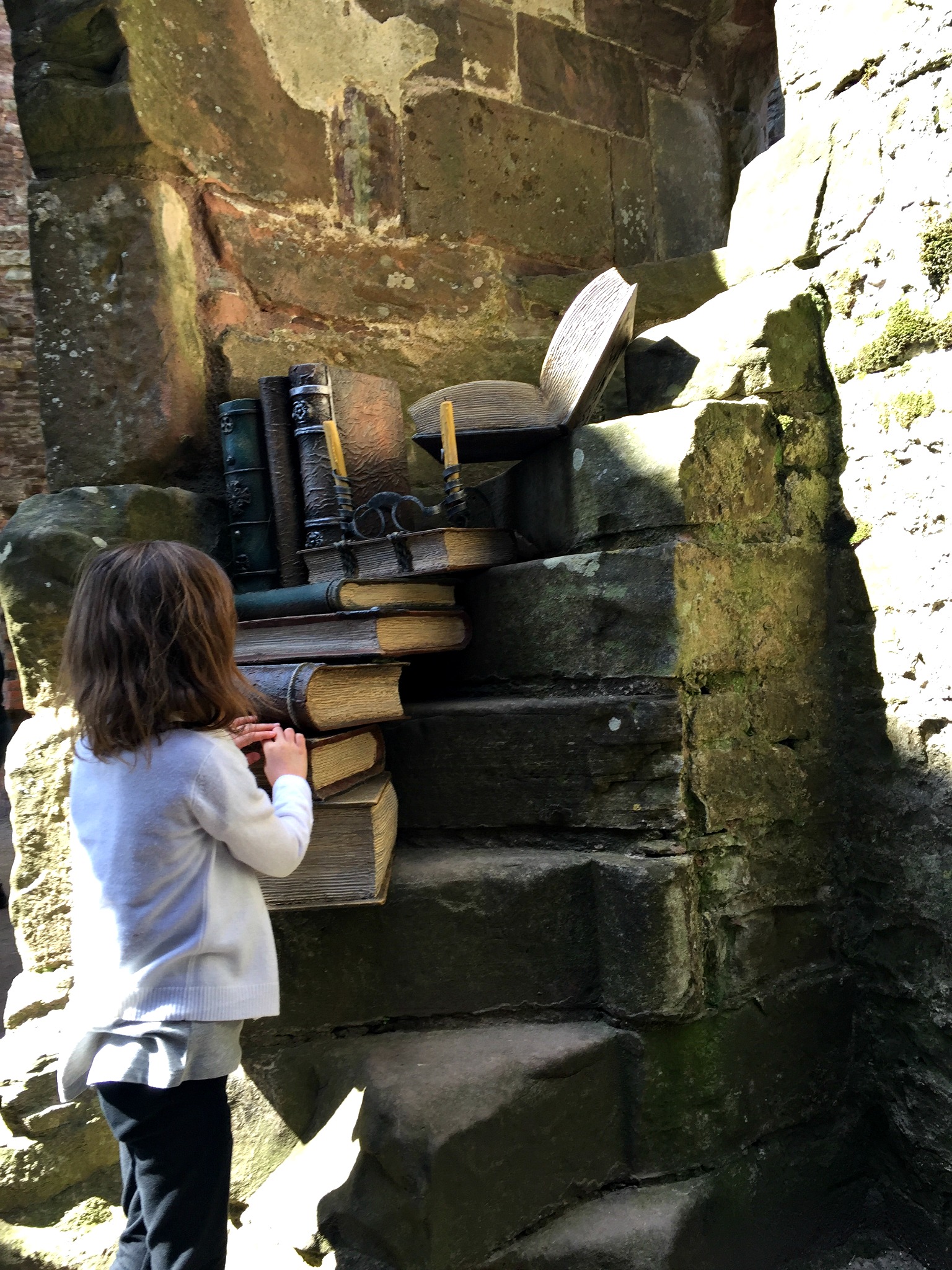 We popped into the exhibition, on the right as you enter the castle. Here, the history of the castle is detailed in easy-to-read information boards. With three children in tow, I didn’t quite get to read as much as I would have liked.

Taking Toddler Boy I’s lead – my two-year-old youngest child – we headed down the steps to the right of the castle and found ourselves walking around the grounds – the hill up to the castle just made it clear what a powerhouse it must have been, while the views across the valley were incredible. 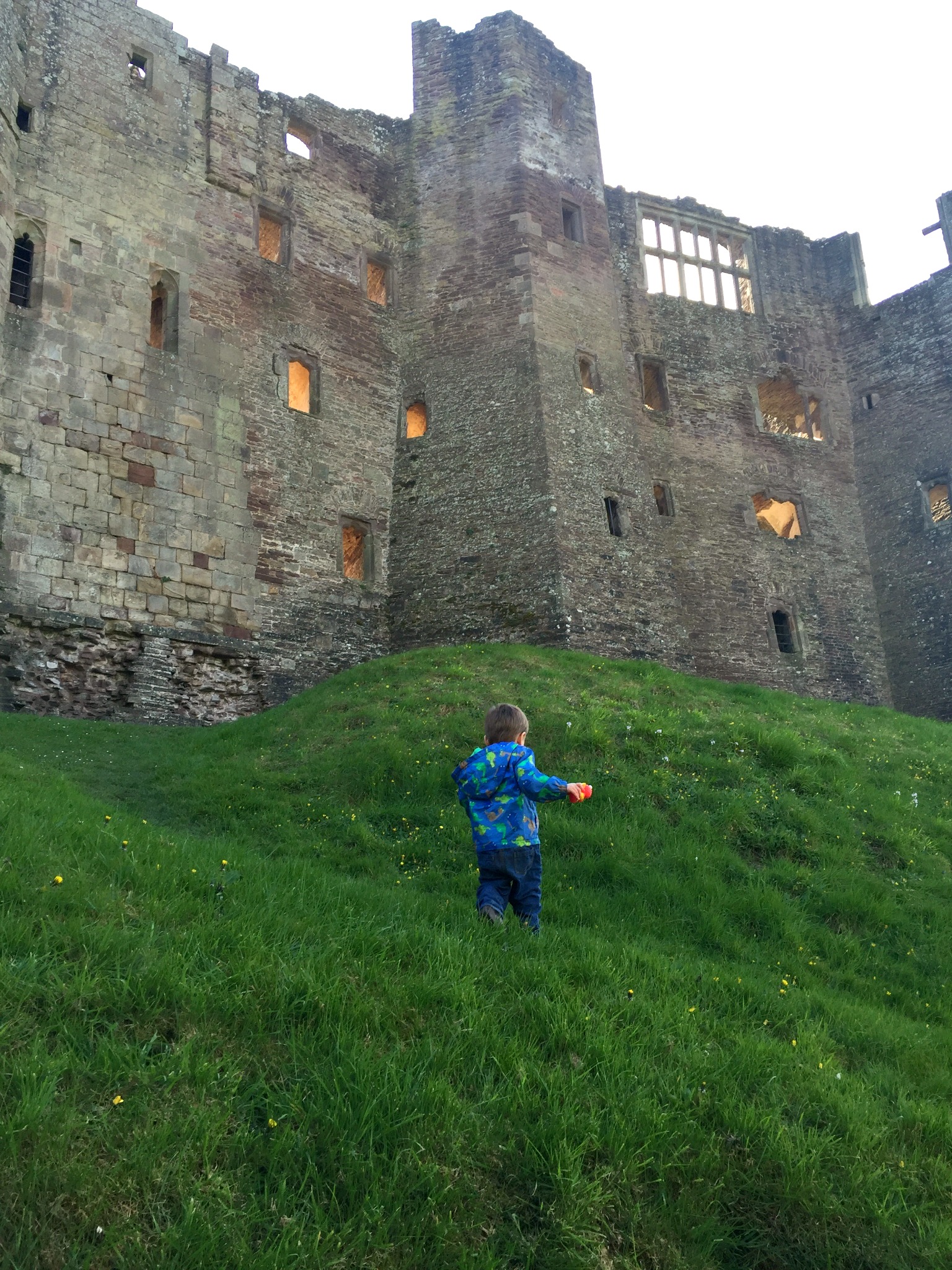 We continued until we found ourselves on the other side of the castle at the bowling lawn, which was a real hub of sporting activity for many years. Here, we found another sculpture, a wooden cart-like structure, which may or may not have been an early kind of lawnmower.

Again, the views here were stunning and with a number of picnic tables around, we decided this would be the perfect spot to eat our packed lunch.

We headed across the bowling lawn, back into the castle and across the wooden bridge, looking down again on the moat. Little Man O, my 4.5 year old son, is obsessed with crocodiles at the moment and spent a while trying to spot some (thankfully unsuccessfully). 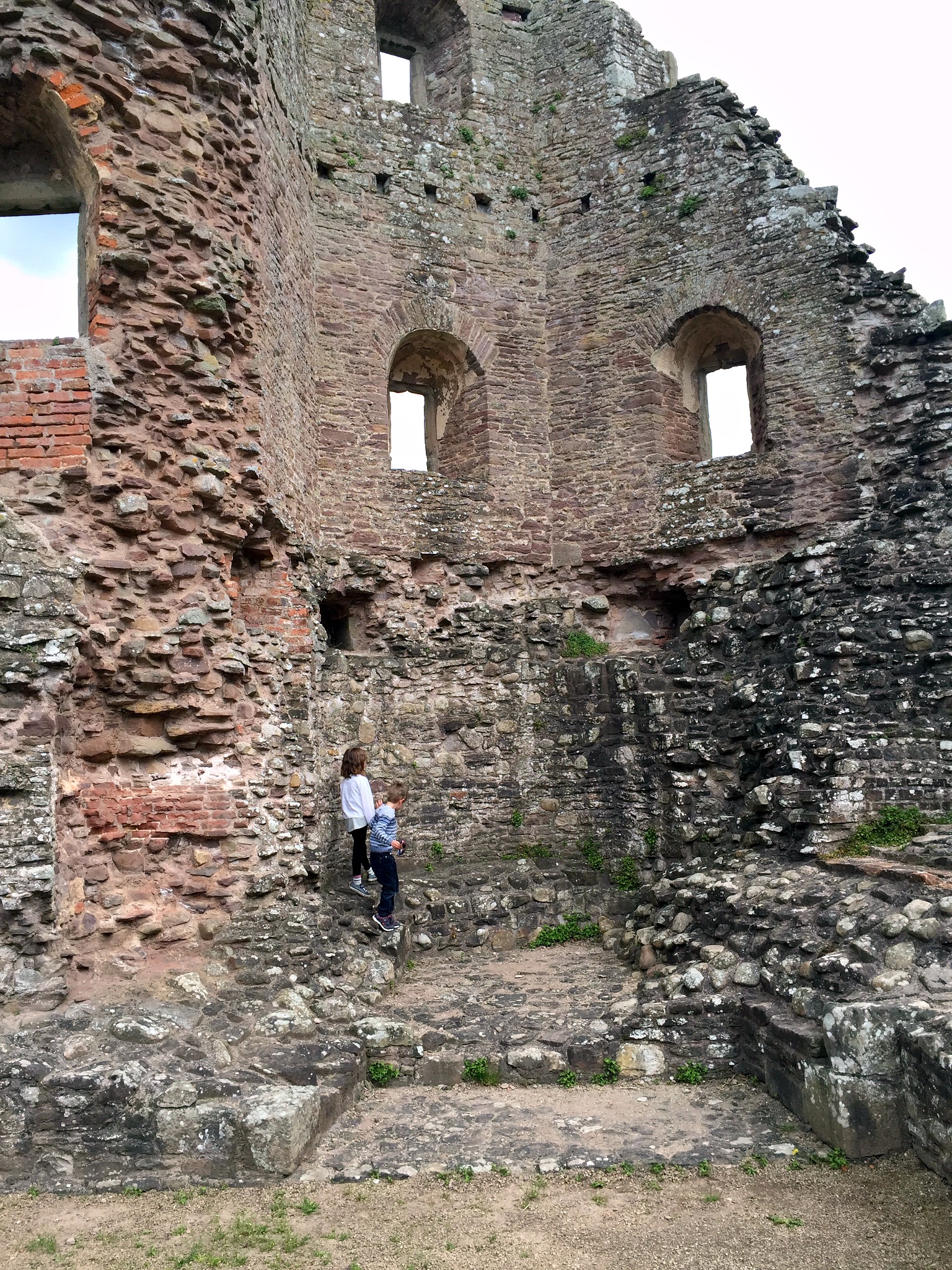 As I’ve mentioned on my blog before, Toddler is a real climber and loves to explore. Which isn’t good when he wants to scale the castle walls, with a sheer drop on the other side, some of them into the moat. With signs all around the castle warning people of the dangers of falling, we pretty quickly put the reins on him for his own safety! The stone cobbled floors and staircases means a lot of the castle is not really buggy-friendly, so it’s worth taking a baby carrier or sling for younger children.

We were there for around two hours in total. The sculptures added a new dimension to what is already a fascinating place, rich in history and drama.

And as for which of the inventions are real or not? You’ll have to visit and find out for yourself!

Entrance costs £6 for adults, £4.20 for children or free for under 5s, or £16.20 for a family ticket (two adults and up to three children under 16). Forthcoming special events include Myths and Legends on Sunday 29th and Bank Holiday Monday 30th May, a weekend of magical and mythical adventure, including a fairy academy, dragon school, knights and archery. 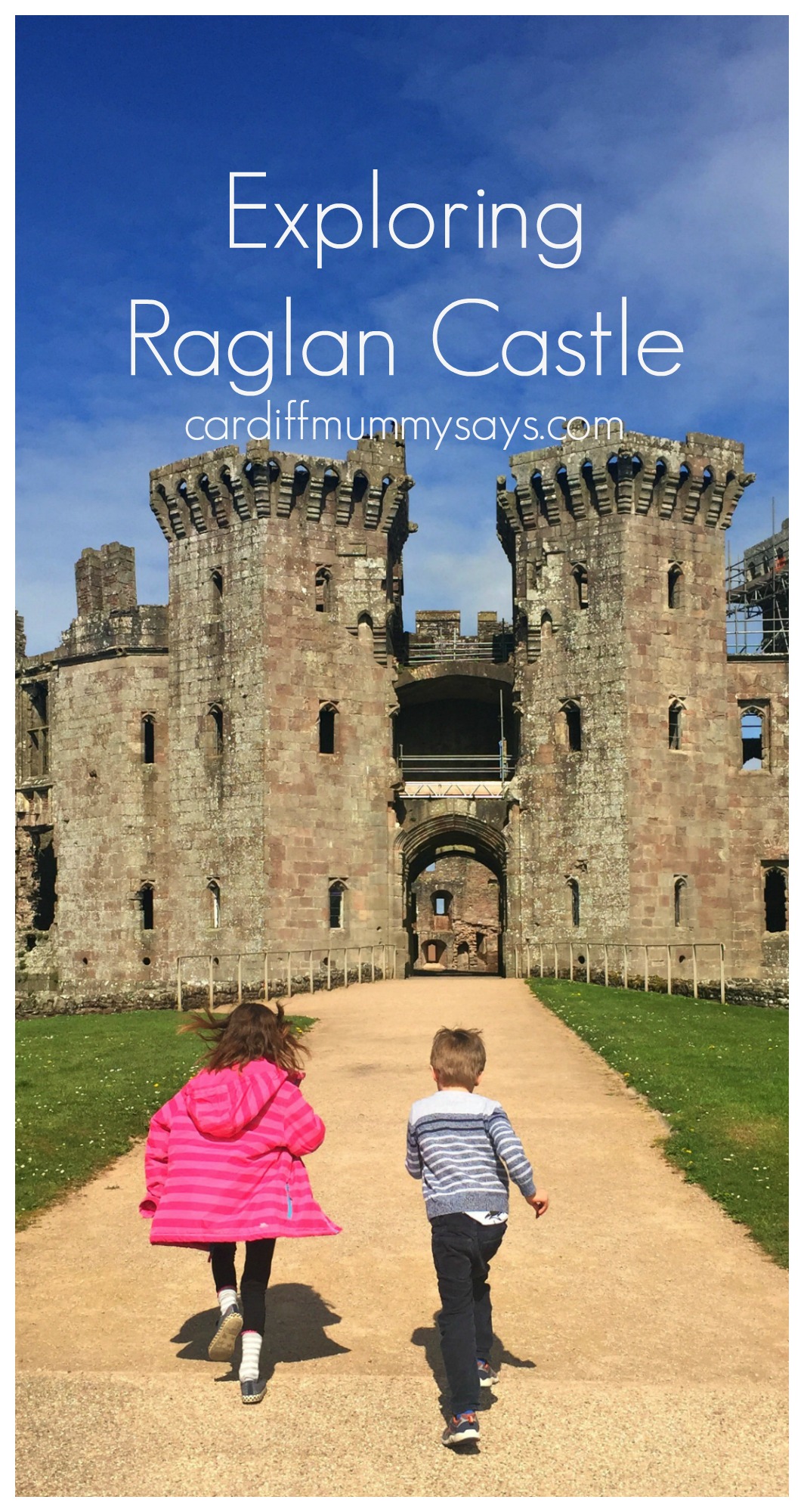 Have you been to Raglan Castle with your little ones? Do let me know in the comments section below, by tweeting me on @cardiffmummy or via the Cardiff Mummy Says Facebook page.

Read more about our role as Cadw ambassadors, plus our visits to Caerphilly Castle and Castell Coch.