The Borrowers was one of my favourite childhood books. Mary Norton’s story of the Clock family – Pod, Homily and their daughter Arrietty – who live beneath the floorboards and survive by “borrowing” items from the human world above, captivated me. More recently, I’ve loved sharing the tale with my two eldest children, Little Miss E, almost 7, and Little Man O, 5. It might have been written in 1952 but it has an enduring appeal.

It’s such a wonderfully imaginative classic story, I must admit I was intrigued to see how Cardiff’s Sherman Theatre would bring it to the stage this Christmas. What would happen when the Boy meets the Borrowers? I remember an early 1990s BBC television adaptation of the book, with brilliant (for the time) special effects – but it’s not quite so easy to juxtapose the world of the tiny Borrowers and their human counterparts on the live stage.

The magic comes down to director Amy Leach and writer Charles Way’s fantastic stage adaptation, which uses some brilliant staging to contrast the two worlds.

I won’t say too much here, because I don’t want to spoil it for those of who are planning on watching it in the coming weeks.

It’s enough to say that designer Hayley Grindle’s frankly brilliant imaginative set brings to life the underground world of the Borrowers with fantastic detail in the oversized props and scenery. A thimble becomes a cooking pot; a dice becomes a stool; Arrietty uses a red tomato as a space hopper and promptly gets told off by her mother for playing with her food. 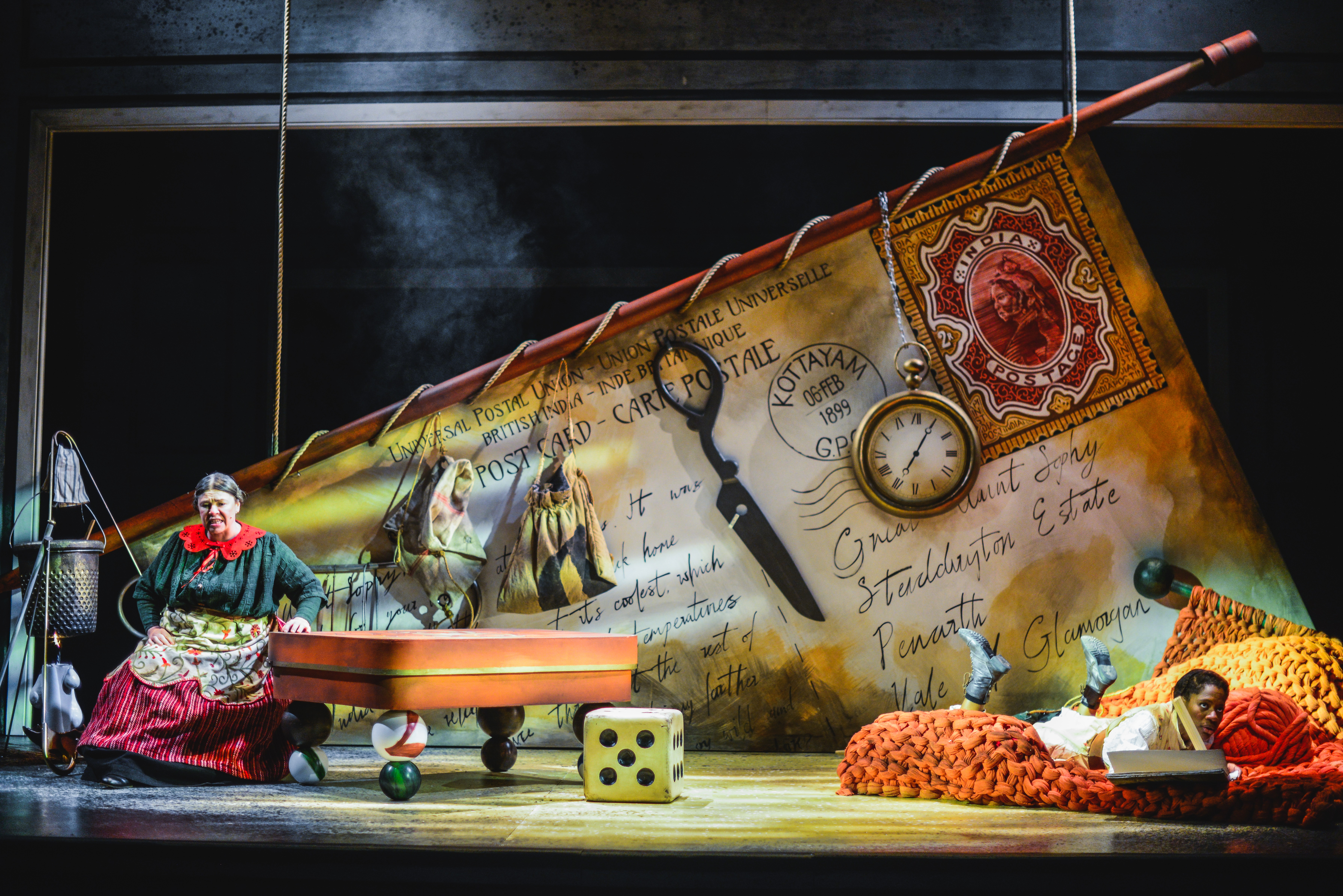 The show is aimed at children aged seven and above, although my five-year-old loved it as much as his big sister. It is very much a coming of age story for Arrietty, played by a feisty Kezrena James, who comes from Cardiff. She has spent a life beneath the floorboards, dreaming of the world outside, but strikes up an unlikely friendship with the Boy (a very likeable Huw Blainey), who helps her family by bringing them much-needed items for their home. Like I said, I don’t want to reveal too much about how the scenes between the two of them are staged, but it’s very creative and works really well. 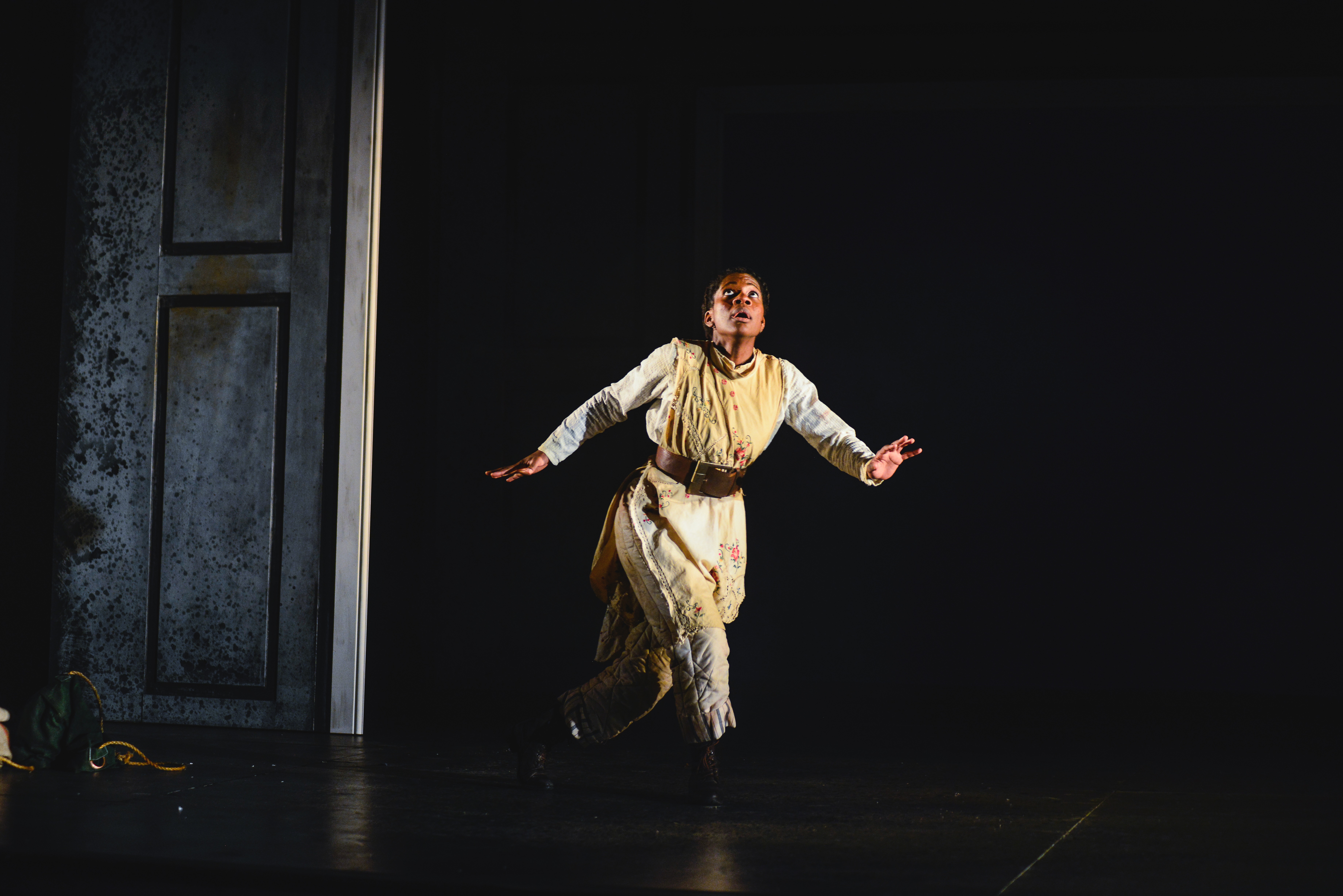 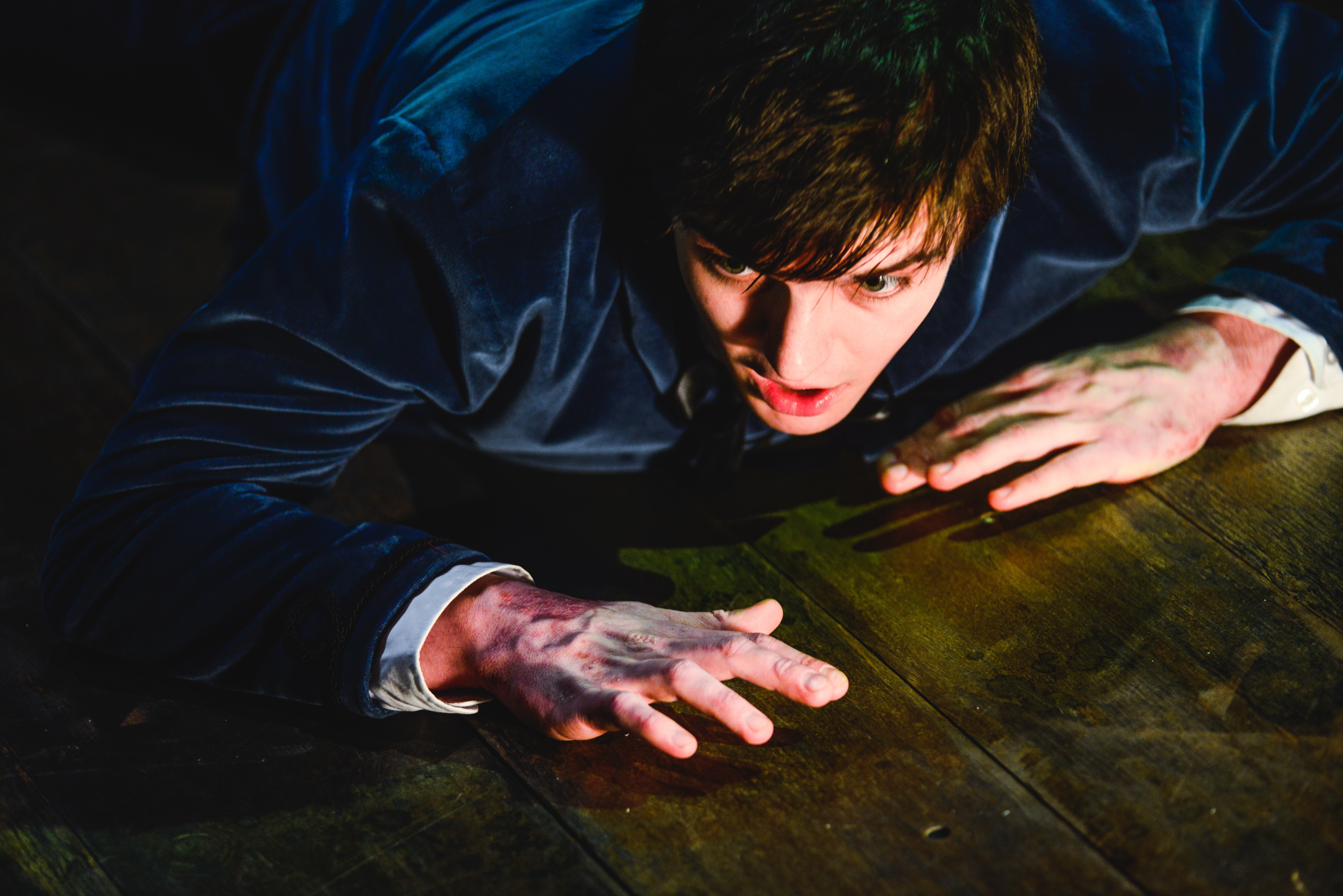 Huw Blainey as The Boy

There were a couple of slightly scary moments, such as the end of the first act where the cruel housekeeper Mrs Driver (played by a menacing Harvey Virdi) discovers the Boy helping out the Borrowers underneath the floorboards and orders Crampfurl (Joseph Tweedale) to smoke out the tin family. We enter the interval unaware of their fate.

The second act opens with the Borrowers pushing through the grass as they seek safety with relatives they have not seen for many years. I loved the contrast between the dark first act and the lighter, brighter second, as Arrietty marvels at discovering life outdoors for the first time. The stage looks beautiful, filled with giant daffodils. There’s also a great comedy moment from Blainey, this time in the role of a singing cricket, which had the whole auditorium laughing. 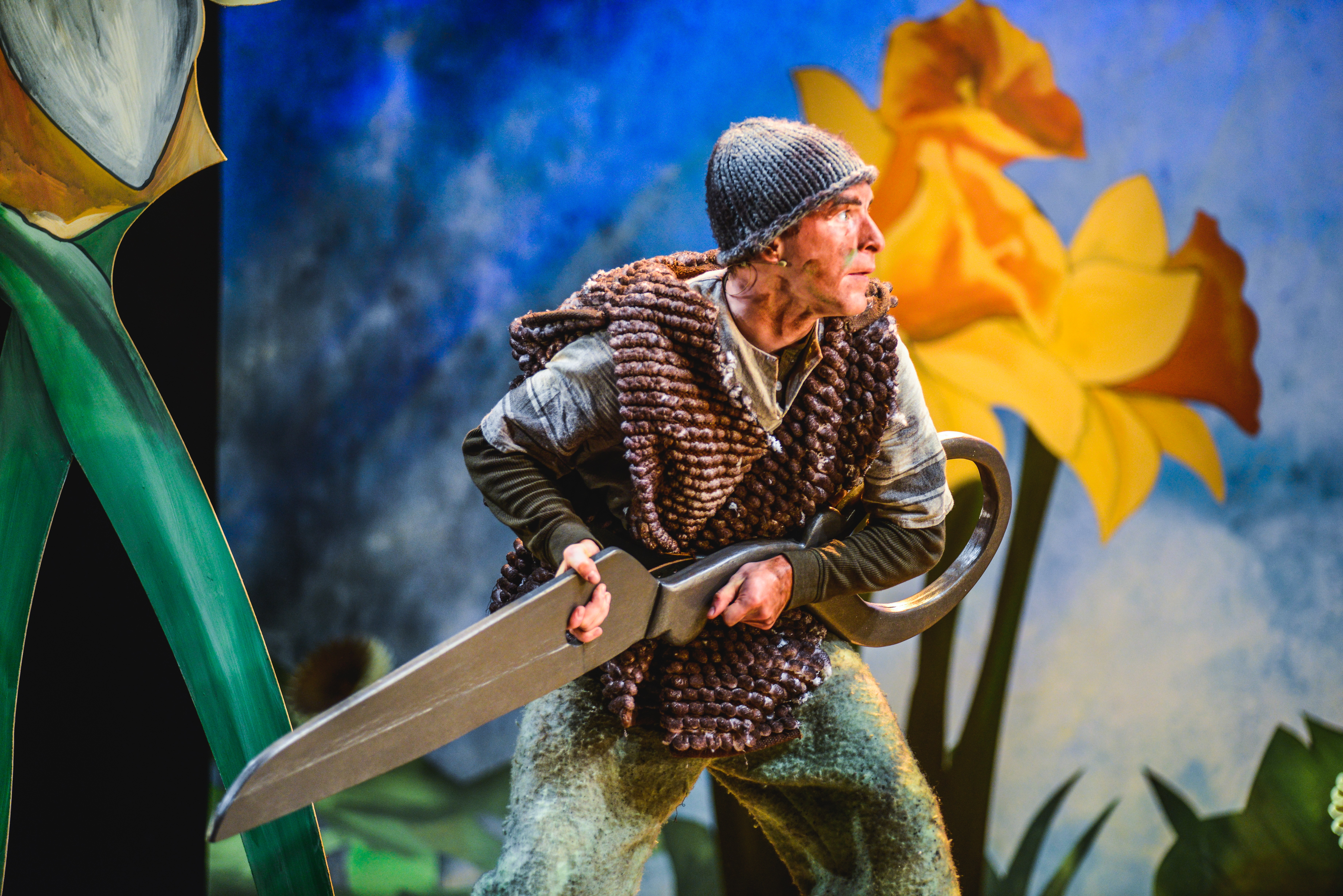 Keiron Self as Pod

There are other subtle elements of humour, including several local references, while the on-stage band – lead by musical director and composer Dom Coyote – adds a lot to the drama and atmosphere of the show.

I’ve already mentioned Kezrena James’s brilliant performance as Arrietty, but Keiron Self and Cait Davis who play her parents Pod and Homily drive much of the show too, as does Tweedale in his second act role of Spiller, a quirky outdoor Borrower, who comes to the family’s rescue.

Interestingly, this production features none of the audience interaction usually associated with children’s theatre. It’s pure drama from start to finish, with lots of dialogue and plotlines to follow. Yet it was cleverly pitched for the age group with all the children captivated throughout. My two sat still for the whole two hours, utterly gripped. 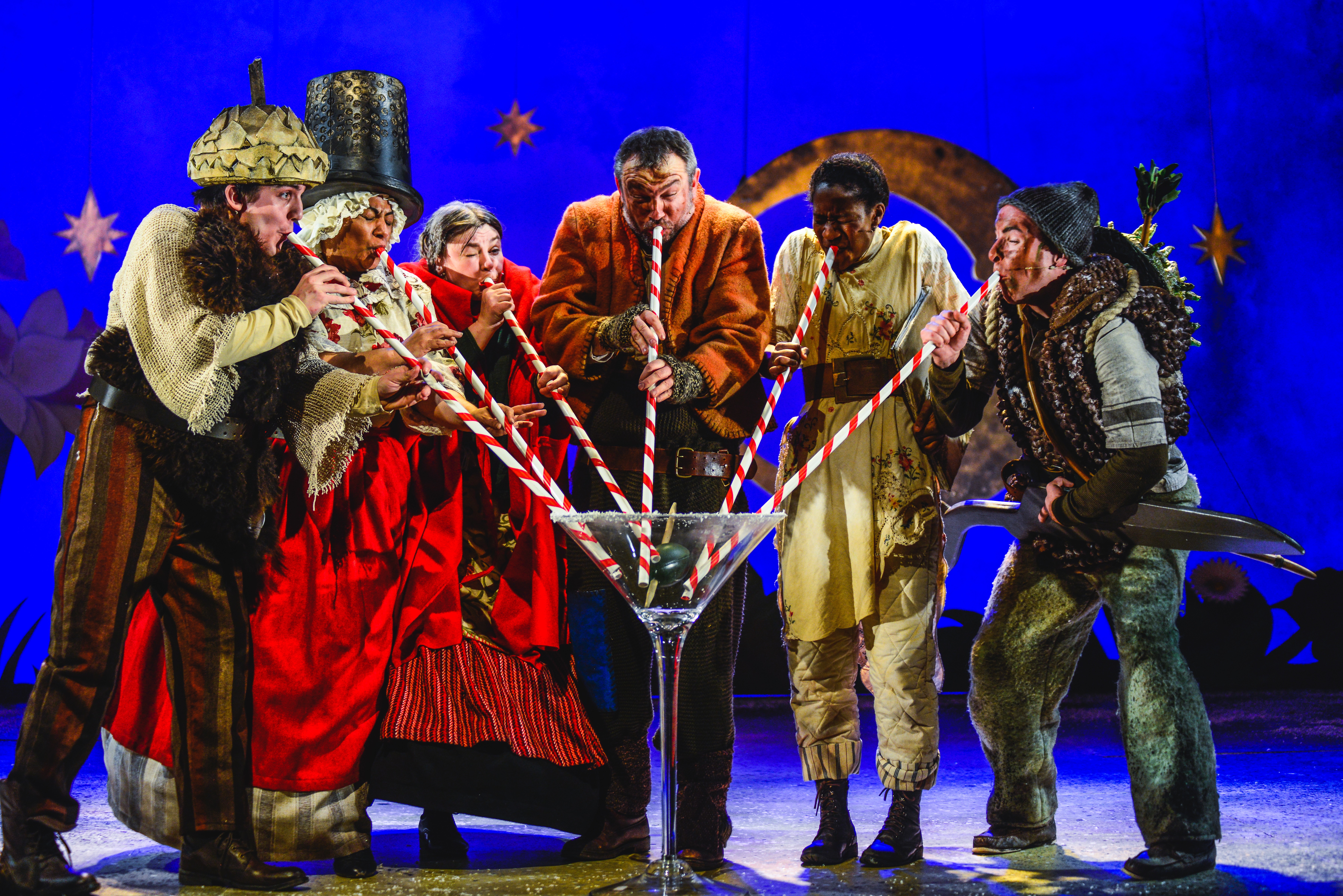 It’s great to see the Sherman Theatre bringing such a well-loved classic children’s book to life for a new generation. The Borrowers is an absolutely brilliant piece of theatre – we thought it was fantastic!

The Borrowers is at Sherman Theatre Cardiff until Sunday 31st December. Tickets are priced £15-£25.

Thanks to the Sherman for inviting us along to review.