With The Emperor’s New Clothes, Cardiff’s Sherman Theatre have once again turned to the classic works of Hans Christian Andersen for their festive offering for young theatregoers.

Last year’s The Princess and the Pea received a mixed reception, but this year they have returned to the form set by 2014’s The Ugly Duckling with an engaging and entertaining family show with an underlying feel-good message.

As in previous years, the show takes place in the Sherman’s smaller studio space, rather than the main theatre (which is currently showing a wonderful adaptation of The Borrowers).

Children are greeted by the cast as they arrive, and are invited to sit on the cushions and mats on the floor, with adults on the plastic chairs behind them. The informal seating works well for the 3-6 year olds the show is aimed at, bringing them right up close to the action, in a relaxed and welcoming way. At an hour long, the show is a great length too. My 2¾-year-old toddler did get a bit restless towards the end, but he was in the minority as most of the children were completely engaged throughout, including his five-year-old brother and seven-year-old sister. 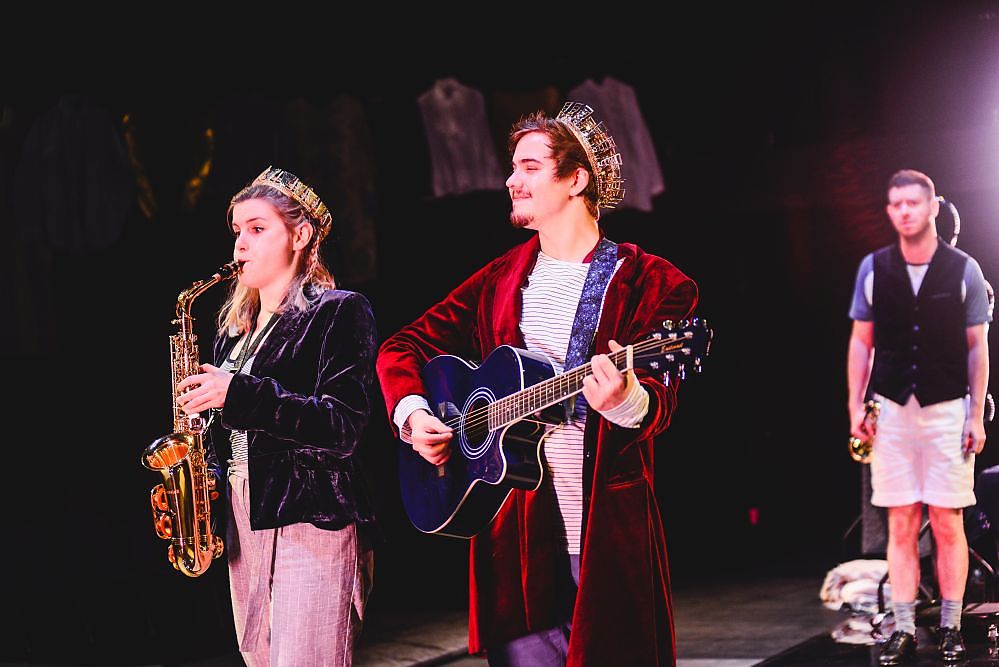 The story of the vain emperor who parades through the town naked after being duped by two tailors into believing he is wearing a beautiful suit which can only be seen by intelligent people is a familiar one for most of us. But this show created by the Sherman and Theatr Iolo gives the emperor a back story, focusing on events as a child which led him to become this way.

Geraint Rhys Edwards is brilliant in his child-like evocation of the playful and energetic Kare, the young son of the current emperor and empress. He pretends to be a monkey swinging around, and gallops about on his imaginary horse, to much amusement from the youngsters watching.

We mums and dads really relate to the tantrum Kare has over putting on his clothes, insisting on doing it himself but ending up with his waistcoat back to front. It is here that Kare’s parents introduce us to the overriding theme of the show – not to take ourselves too seriously and to laugh at ourselves even if we feel stupid, because if we don’t, someone else likely will. 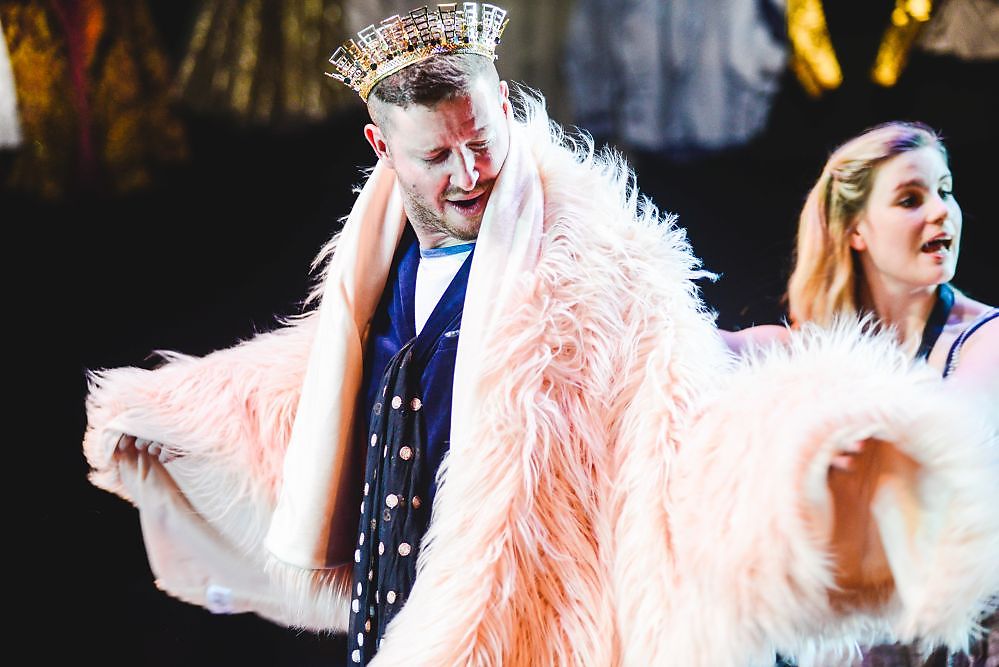 Sadly this lesson is something Kare forgets very soon after when he falls over on his first official parade and is laughed at by the crowd.

And thus Kare retreats into his shell, loses his silliness and the warmth and laughter disappears from the regal household.

Kare grows up to be overly worried about what people think of him. He finds his confidence in the clothes he wears, so much so that as his wardrobe grows, so does his ego. 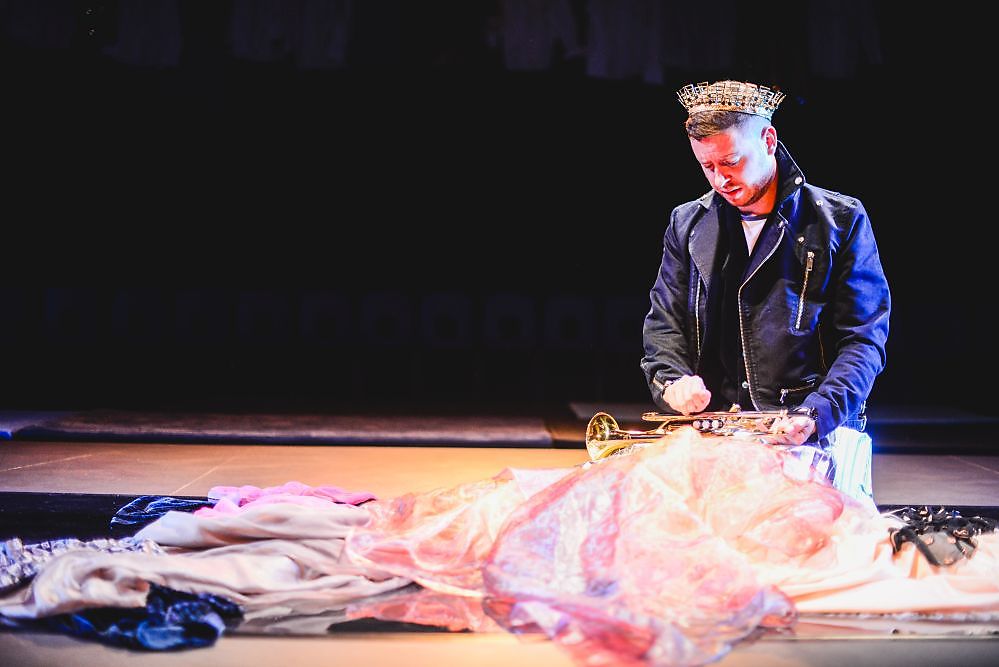 When he is duped by two tailors into believing that they have created him an outfit so magnificent only the most intelligent people can see it, we know his ego is at work as he pretends to be able to see the invisible cloth. However, it is testament to Edwards (not to mention direction from Kevin Lewis and the script from Alun Saunders) that underneath all the bravado, we can still see that scared little boy who was laughed at on parade and will go along with anything to avoid feeling stupid. And before you ask the same question as all my friends who I’ve told I was going to see the show… no, he’s not actually naked!

Elin Phillips and Tobias Weatherburn play both Kare’s parents and the weavers. I had wondered if this would be confusing for the young audience, but they were fine. After all, children really do have the most amazing imaginations. Charlotte Neville’s minimalist set design again relied on the children to use their imagination to do the rest. An array of outfits hung overhead, and there were a few props, but the simplicity was lovely. The action was accompanied by some memorable songs, with all three performers playing various instruments and singing. 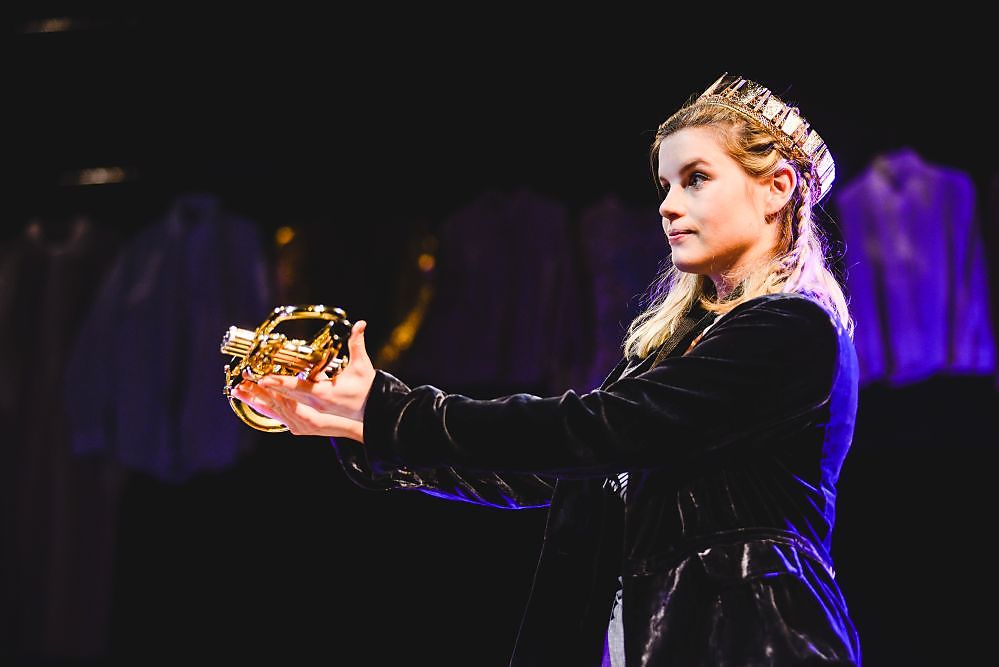 Much of the humour comes from Geraint Rhys Edwards. As the young Kare, his mannerisms are spot-on and the comedy continues in adulthood, as we see him strutting around in his various clothes.

There’s also a few moments of humour from the young audience too. As the show starts, one child pipes up rather loudly that they’ve read the book. At the end when Elin asks if we want to sing, a child shouts no. But, testament to the message of the show, even the actors look like they are stifling back the giggles, practicing the message they are preaching. Because as we all know, there’s no point taking ourselves too seriously and sometimes you’ve just got to laugh about it all.

The Emperor’s New Clothes and the Welsh-language Dillad Newydd Yr Ymerawdwr is at the Sherman Theatre until Saturday 31st December. More information here.

Thanks to the Sherman for inviting us along to review