*thanks to Wales Millennium Centre for inviting me to review

The reviews have certainly been divided on Tiger Bay The Musical, currently playing at Wales Millennium Centre in Cardiff Bay until Saturday 25th November.

The national newspapers weren’t impressed. It was, they said, overly ambitious, derivative and too long.

On the other hand, most of the Welsh press and several online national publications thought it was brilliant.

“An absolutely outstanding production” said The Reviews Hub. “Moving, meaningful and bursting with local charm,” said Broadway World. And Nation Cymru called it “an epic, ambitious and emotional production which frequently had me – and the audience around me – in tears.”

There was a standing ovation the night I saw it – which I’ve been told is pretty much a nightly occurrence. And Twitter is full of glowing praise from those who have seen the show.

So where do I stand?

The show isn’t perfect – but it is incredible. Not least because it’s our story. And as Wales Millennium Centre’s biggest and most ambitious project to date, you can’t help but think you are witnessing something very special and significant indeed. 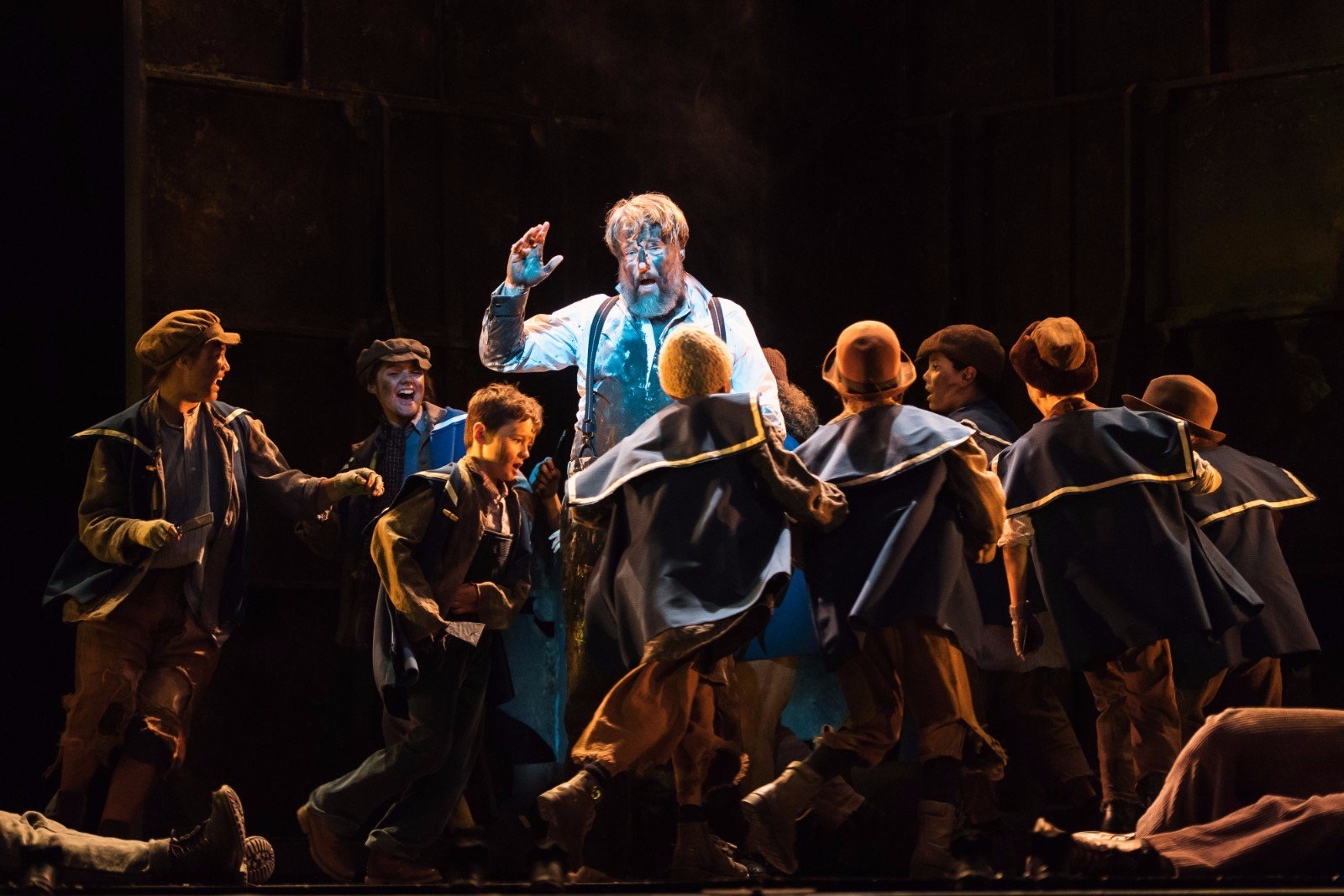 It seems fitting that the musical – produced by Wales Millennium Centre in association with Cape Town Opera – is set in the area in which it is being performed. Focusing on Cardiff’s thriving docks in the early 1900s, the show is full of home-grown talent – both those at the top of their game and new and emerging performers and creatives – as well as plenty of international talent too.

I will give a full disclaimer here and say that for the last month or so I have been helping out the PR team at Wales Millennium Centre as part of my ‘other’ job as a freelance PR. But before that came about I was already on the list for press night so I’m writing this in an objective capacity as a theatre reviewer, a musical theatre-lover and someone with a real love of Welsh history. I had been planning on taking my eldest two children along but a very last-minute change of age rating from 8 to 11 meant I took two theatre-loving friends instead. This review reflects their opinions as well as my own. 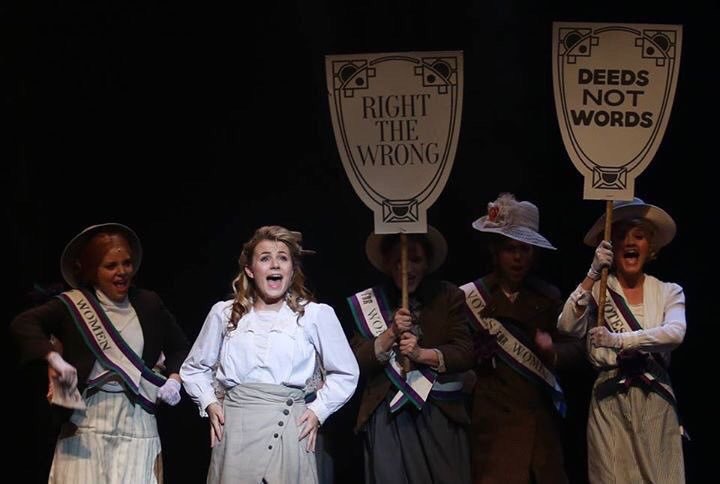 Yes, there are echoes of Oliver! and Les Misérables (which interestingly was also damned by critics when it first opened but has gone on to become one of the world’s most successful musicals). But listen carefully and Cardiff boy Daf James’s score is a beautiful fusion of Welsh choral music, a contemporary musicals sound, and an international flavour inspired by the diverse cast – some of whom performed in the production earlier this year when it was staged and developed in Cape Town. The beautiful layering of melodies and harmonies are breathtaking at times. It’s always strange watching a musical where you are not familiar with the music – you don’t get that same emotional rush when you hear the unmistakable notes of your favourite tune beginning to play – but there were some really beautiful and memorable songs such as Shadowland and The Harbourmaster of My Heart which have been stuck in my head ever since.

At points, the key messages were laboured a little too much for my liking. I love a good cheesy musical as much as anybody but there were moments when the oversentimentality jarred a little with the dark and gritty tone of the script, the set and the lighting.

As I said it isn’t perfect – but it’s still a mightily watchable show with numerous outstanding performances. 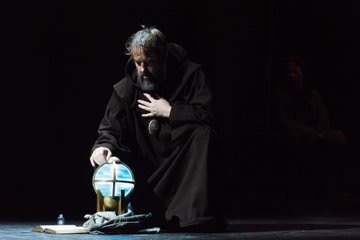 John Owen-Jones plays the Marquess of Bute. In a slight re-writing of history, Bute is grieving the death of his love interest and trying to find his lost son. His solo number Mary is tender and heartfelt and a reminder of just why he is one of the country’s leading musical theatre stars.

Mountain Ash-born Vikki Bebb plays shop-girl Rowena, and Dom Hartley-Harris, from Birmingham is Boar War survivor Themba, who has come to Cardiff looking for work. I loved them both in their respective roles. Dom effortlessly glides from high notes to low with such passion in his velvety-smooth voice; Themba’s grief evident in every note. Vikki is at first innocent and naive as shop-girl Rowena but she soon becomes a force to be reckoned with as she events make her stand up her herself and what she believes in. Her voice is stunning. Both are recent drama school graduates and no doubt will have amazing careers ahead of them. 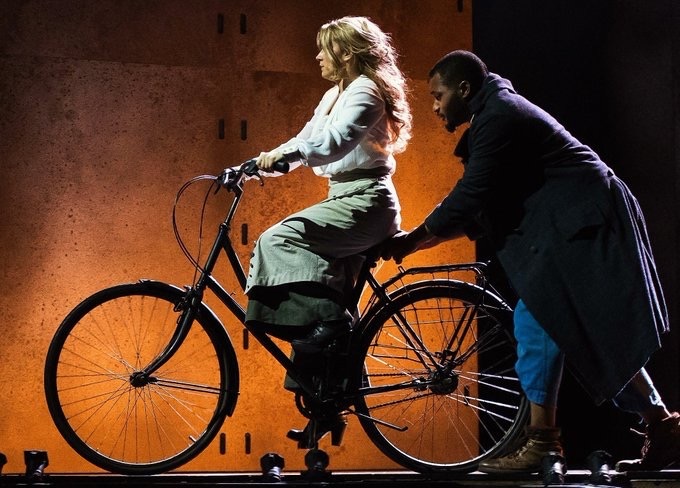 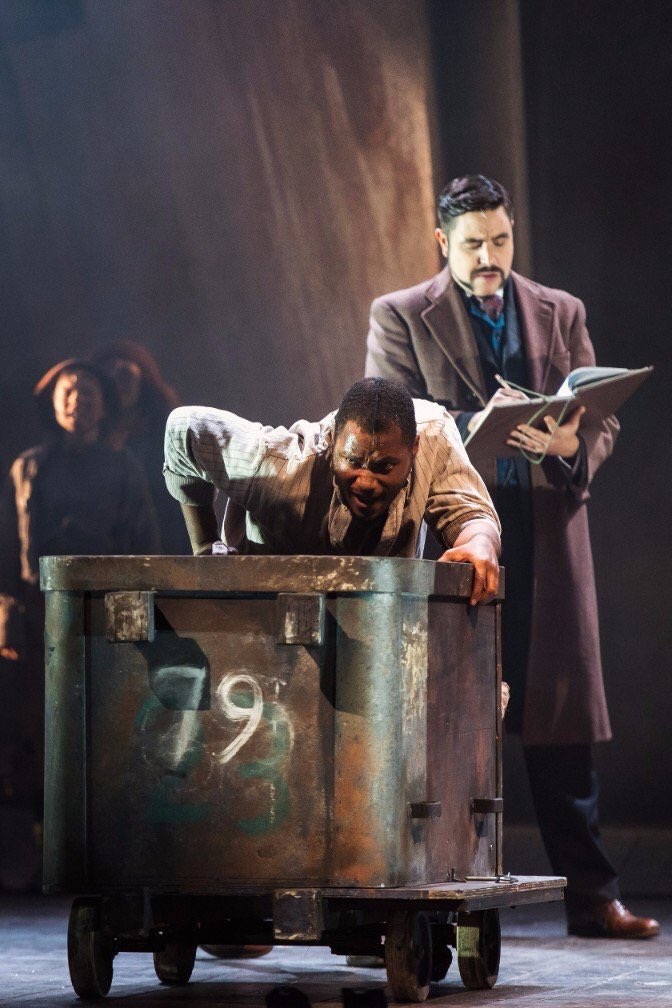 Cardiff’s own Noel Sullivan is perhaps still best remembered for being in pop band Hear’Say – but he is such a pleasure to watch in musical theatre. I’ve seen him in Rock of Ages and We Will Rock You, both in Cardiff, and have always been impressed with his stage presence and vocal power. Tonight was no exception – and we got to hear him do it with a thick Cardiff accent too. I loved his character of Seamus O’Rourke, the harbourmaster who runs the roost at the docks, bullying the workers, cheating on his fiancé and trying to fleece his boss, Lord Bute. He has some brilliantly gritty scenes and really looked like he was relishing being the bad guy.

Busisiwe Ngejane as prostitute Klondike really stood out for her commanding vocal performances and incredible stage presence while Suzanne Packer is very likeable as Marisha the matriarchal landlady of the docks pub frequented by the immigrant workers. 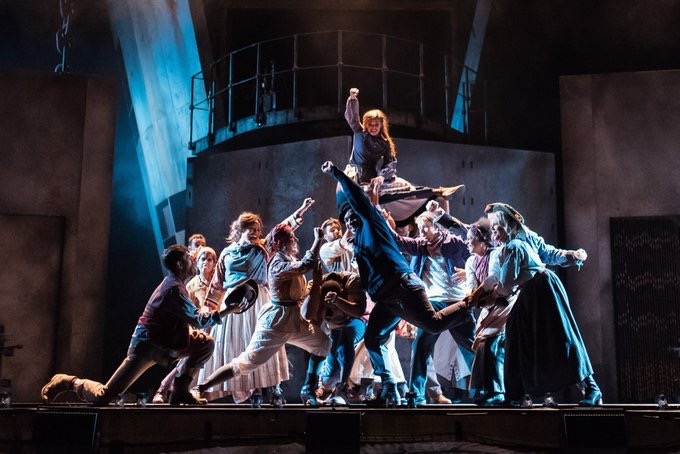 Much of the show belongs to Ianto though. The waterboy living on the streets of Tiger Bay is the vehicle that brings together the various characters, helping them recognise what’s important in life.

Two local young school girls – 10 year old Louise Harvey from Rhiwbina in Cardiff and 11 year old Ruby Llewelyn from Llantrisant – are alternating the role; with Ruby on stage for the night I saw it. She has a brilliant confidence for someone so young, completely holding her own with the musical theatre legends on stage alongside her. The musical number My Name is John – with John Owen-Jones and Noel Sullivan – was a particular highlight with some brilliantly funny moments as O’Rourke tries to engage Ianto in a deceptive plan to convince Lord Bute that Ianto is his long-lost son in order to get his hands on Bute’s wealth.

The choreography by Melody Squire really helped drive a lot of the musical numbers. The waterboys – the young street kids who helped the donkey men heave their coal carts around and performed superbly by 10 local youngsters – in particular had some great moves in Rigging Class and Havannah Nautical School. The foot tapping and stomping gave the songs such energy and passion.

There were a fair few local references in the script which got a great response from the audience. However I can I imagine all of that went over the heads of the national press. Which is a shame. I know that all reviews are subjective and just one person’s opinion (as indeed this one is too!)… but I’m just not sure the top critics’ could ever have had the same connection to the show we, the local audience, did. Their reviews certainly aren’t reflective of the general feeling in the Donald Gordon Theatre that night.

We always see a lot of the Valleys coal mines in literature and TV and we know the hardship and tragedy that industry endured. We also all know that Cardiff was once the biggest exporter of coal in the world and that people came from all over the world to work here. But how much do most people know about what life was really like? The rate of pay going down when the coal price was down but not increasing when the price was up; the striking workers; the ‘blacklegs’ – the immigrant workers who kept the docks running when the unions striked; the street children; the prostitution; the racial tension as locals told the foreigners to go home and stop taking their jobs. I like to think of myself as someone who is quite knowledgeable of local history but I certainly learned a lot from this show.

This is our story; our history. This is how our city became what it is. The characters and plot line might be fictional but the social and economic climate in which it is set is very real. This is a show that the people of Cardiff really need to see. I sincerely hope this isn’t the last we see of Tiger Bay.