Red may be inspired by Little Red Riding Hood but this new family theatre show, produced by Wales Millennium Centre and Likely Story, is nothing like the fairytale most of us are familiar with.

Showing in the Centre’s smaller theatre space, the Weston Studio over the festive season, Red is an imaginative, playful, at times bizarre production for children age seven and above, which updates the action to the modern world and asks what happened next to the woods.

Red opens on Christmas Eve. Two postal workers, Jones and Grimsby (played by Hazel Anderson and Ellen Groves), have one last parcel to deliver so they can get home for Christmas. This final parcel, however, is addressed to The Cottage in the Woods. But no one goes into the woods any more. In fact the woods have all but been forgotten about because, once upon a time, a little girl ventured into the words and never returned. Everyone thought she’d been eaten by wolves and so they wanted to destroy all the wolves. The woods were abandoned and fell into ruin. Nobody was brave enough to visit and everyone soon forgot the woods even existed.

And so, magical parcel in hands, Jones and Grimsby nervously head into the woods to make the delivery. They soon meet Peter, a tree dweller played by Connor Allen (such a charismatic performer), who has been waiting for a friend he used to know, and the three of them take us on a weird and wonderful journey through the mysterious woodland.

There’s a surreal edge throughout the hour-long performance, as the characters become everything from whispering trees and slime monsters to a dung beetle and a spider who leads us all in an aerobics session. My children spent much of the show in fits of laughter. There were plenty of one-liners, a few jokes that ran throughout, and lots of physical comedy too.

It’s all very dreamlike and random, and very reminiscent of the way children use their imaginations to become anything they want. It’s very different to the usual children’s theatre shows, but very entertaining and thought-provoking. Looking at the smiling, laughing and engaged faces around the audience, it was definitely well-received.

The action is accompanied by live music from Tom Elstob, stood on a podium behind the three performers on the stage, and sometimes finding himself part of the narrative. In fact, there’s plenty of crossing of that ‘fourth wall’ with the cast responding to comments from the audience and making quips about costume changes and the like. It works really well. 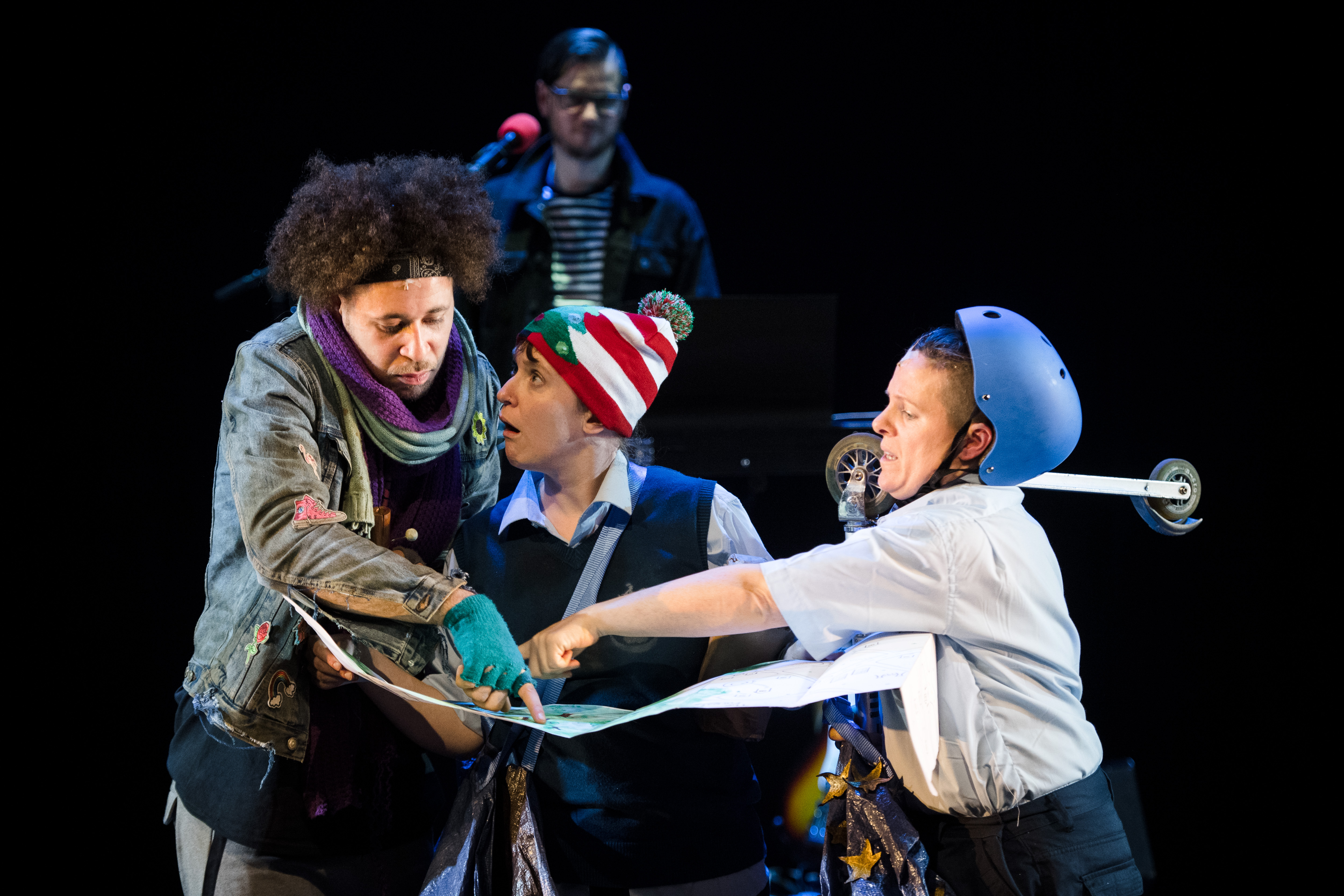 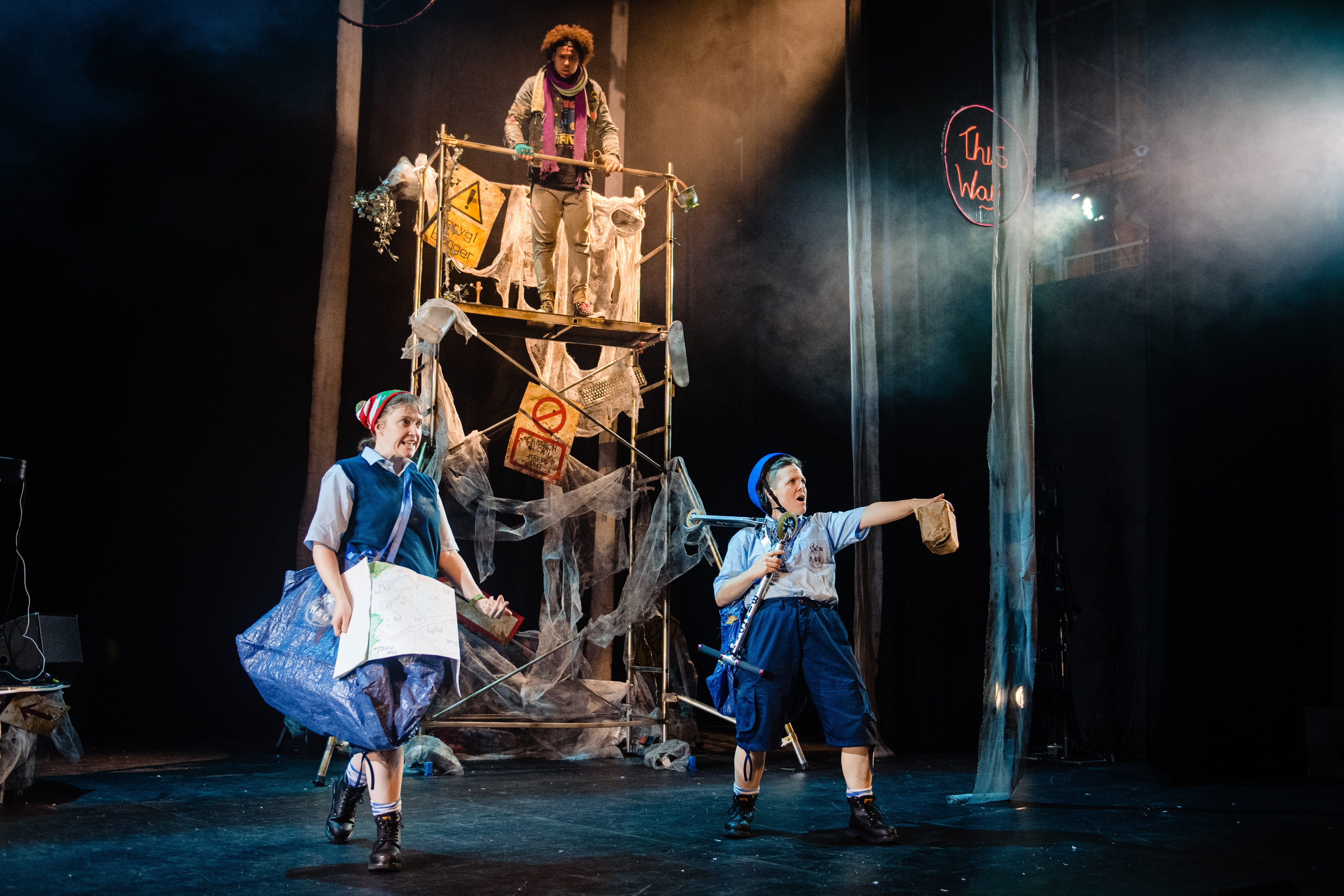 The set consists of scaffolding platforms covered in danger signs and cobwebs, while above hang neon signs of place names and directions, which illuminate as the story dictates. The costumes seem to get more inventive as the show progresses. There’s also some effective puppetry, in particular with Grandma Red, who we meet right at the end.

Red has echoes of Alice in Wonderland and the Wizard of Oz as well as nods to the fairy tale that has inspired it, with elements from Little Red Riding Hood creeping in but not in the way you might expect. 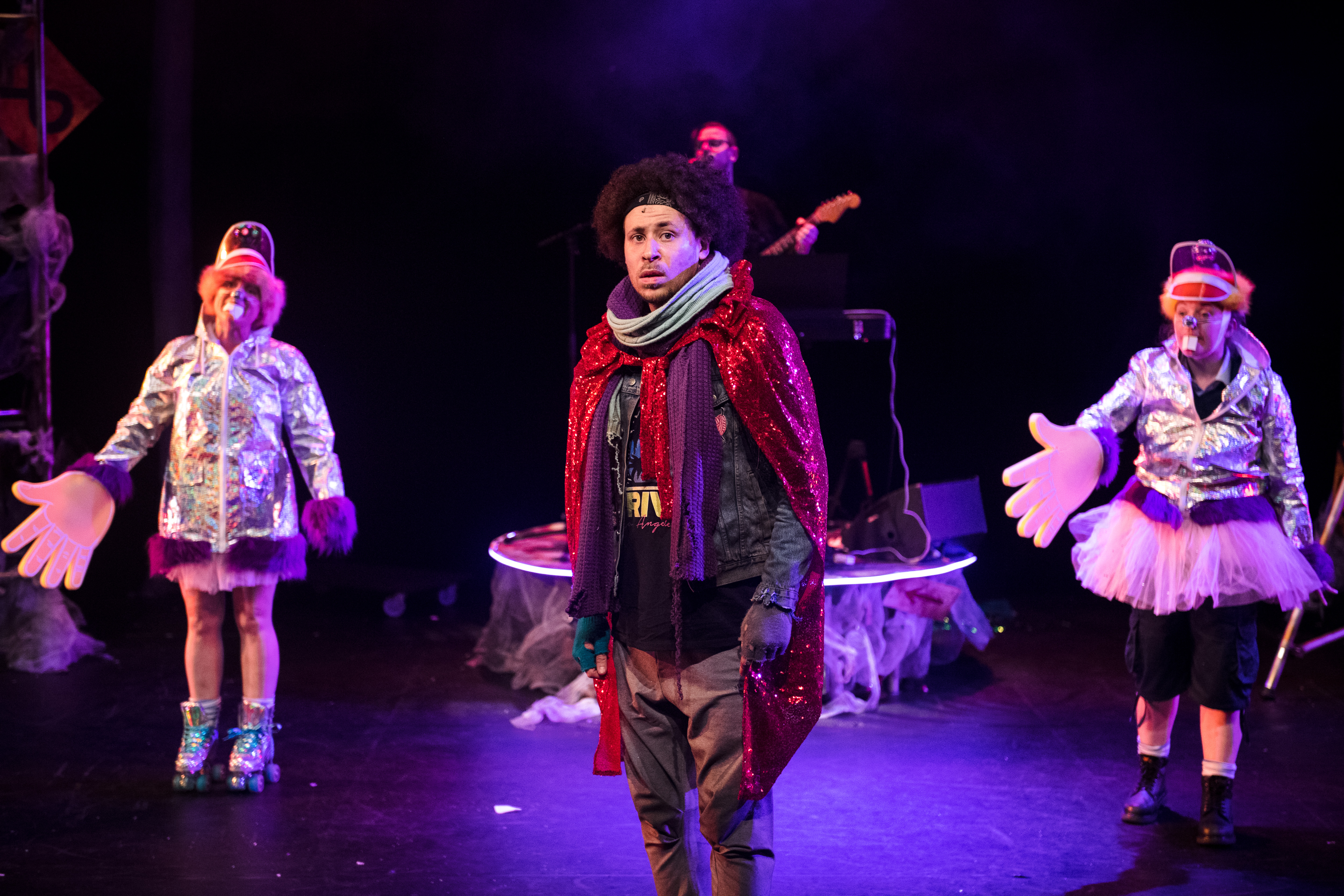 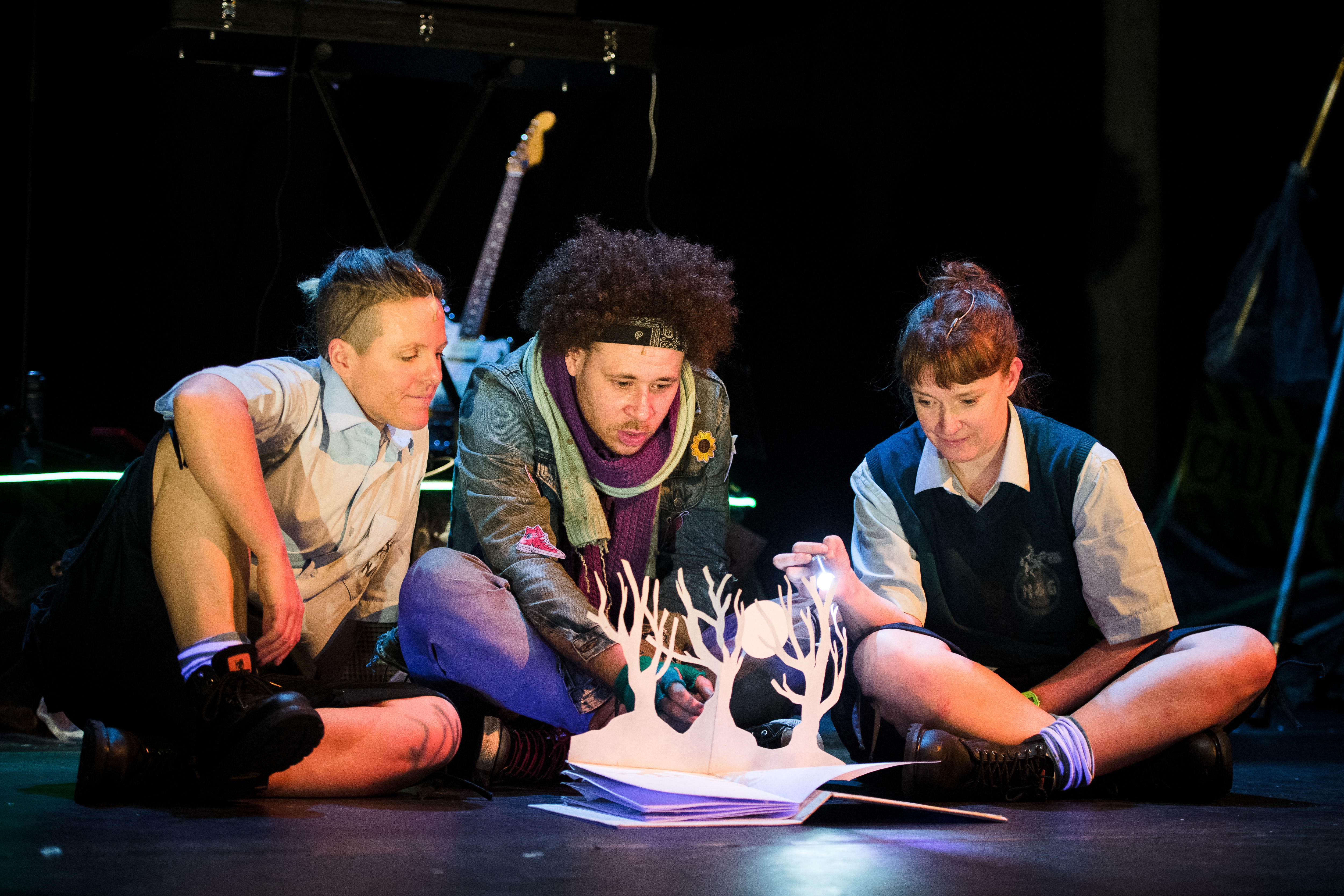 This is an ambitious and thought-provoking theatre show which gives a new twist to a well-known take. It never speaks down to its young audience, and uses humour and imagination to deliver a very important message. We thought it was great.

Red is at Wales Millennium Centre until 29 December. Tickets cost £10 per person. For more information and to book tickets, visit the website.