*in association with National Museum Wales

Dinosaurs? On the loose? In Cardiff?!

It was a week or so ago when the news broke on social media that giant dinosaur claws had appeared on the roof of National Museum Cardiff. Huge, great big claws grasping onto the iconic roof of the Civic Centre building had suddenly appeared overnight. 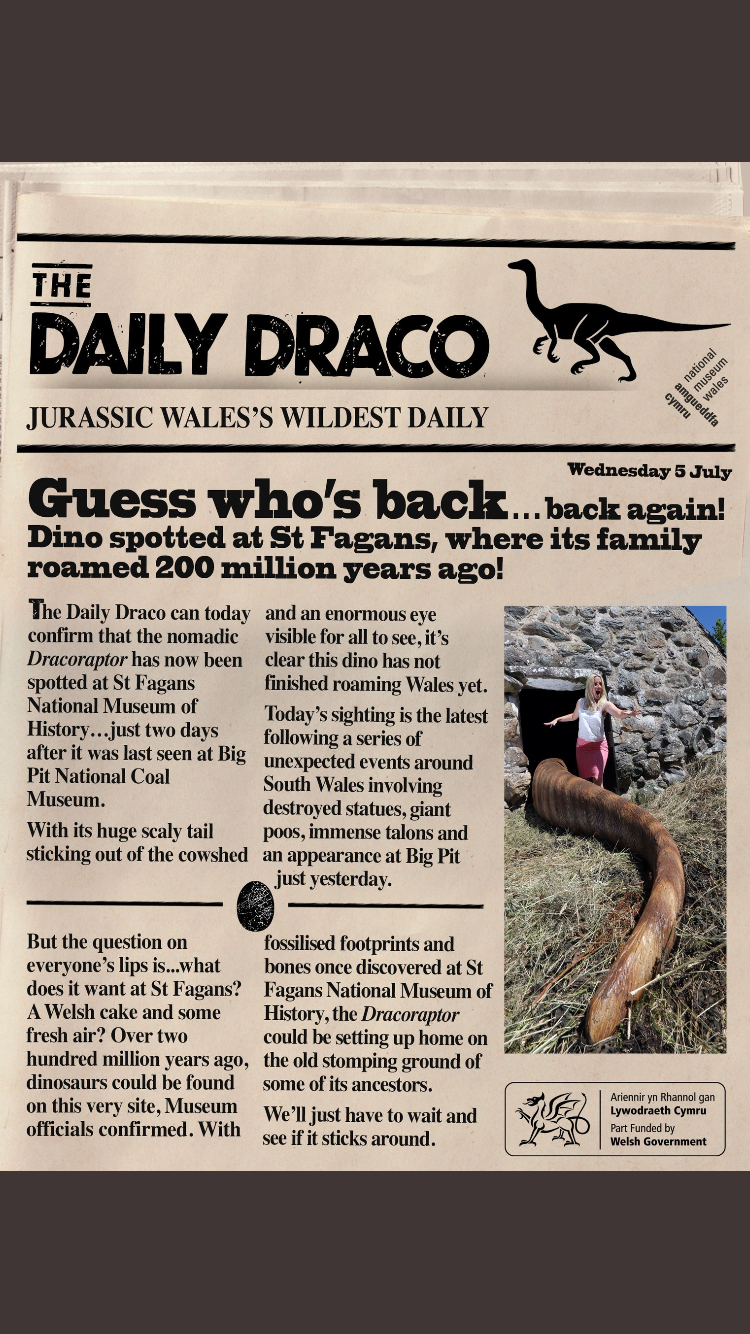 So obviously we had to check out the rumours that prehistoric visitors were rampaging across our city.

My sources at National Museum Wales (for whom we are blogger ambassadors) tell me it is the same dracoraptor who created havoc on the streets of Cardiff back in May half term, when giant dino poo appeared on Queen Street, alongside a smashed up statue of ‘Welsh dinofather’ Thomas H Thomas, who discovered Welsh dinosaur footprints in 1878. 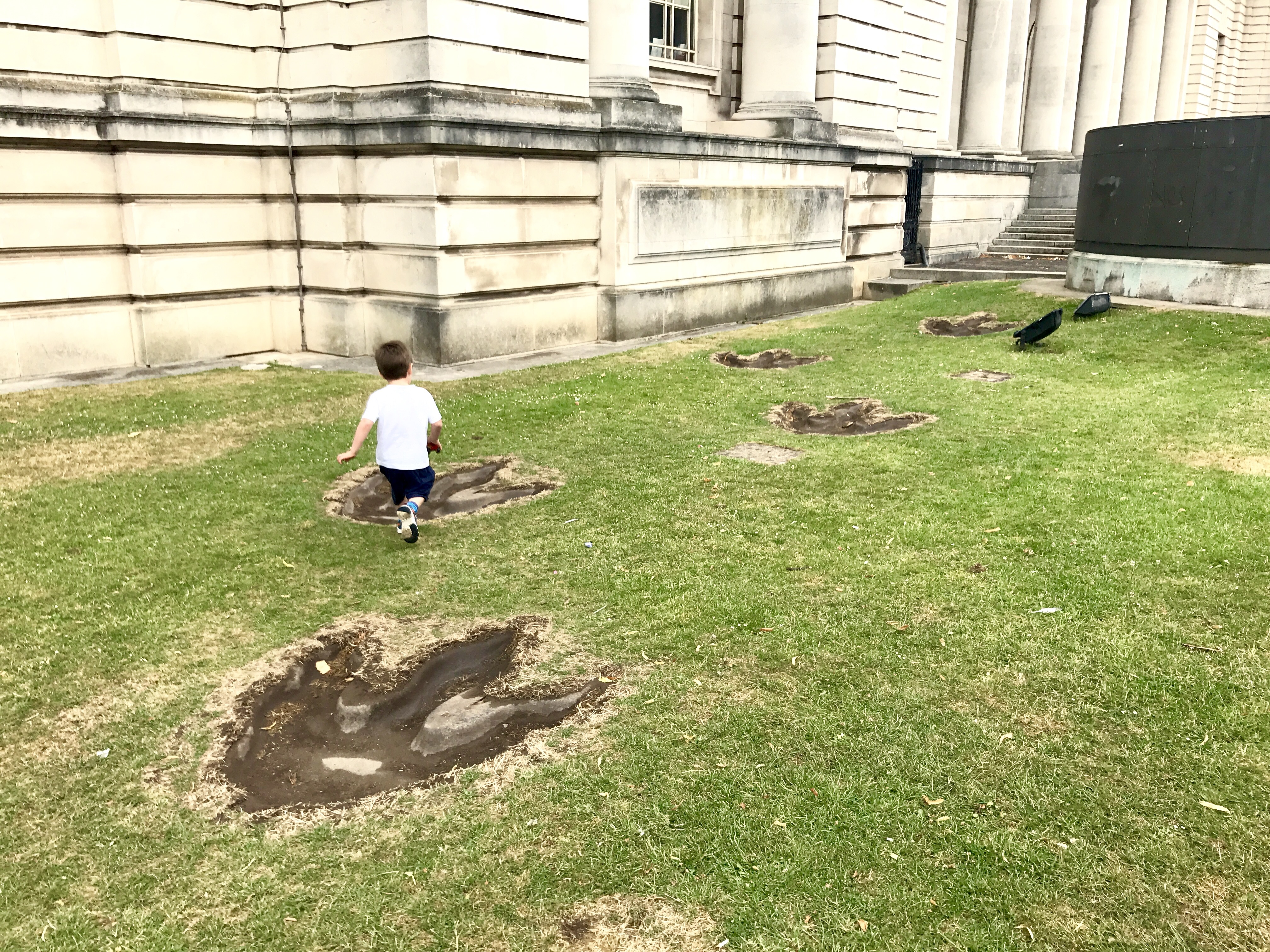 We’d already seen the giant dinosaur footprints outside National Museum Cardiff when we went to visit the fantastic new Dinosaur Babies exhibition (read our review here; it’s on until 5th November 2017). And just when the museum staff thought the dinosaur was safe inside, it appears he’s on the loose again. 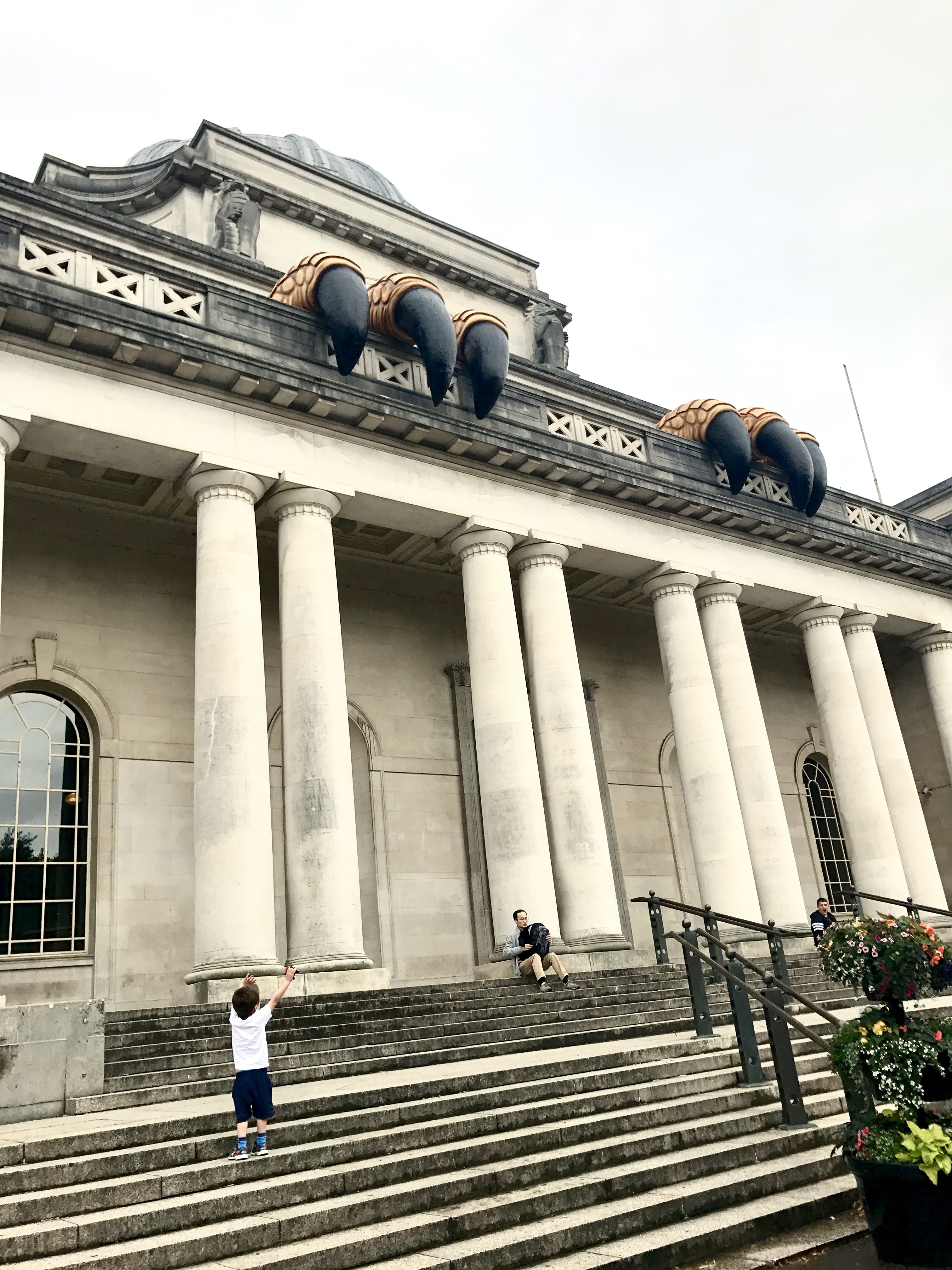 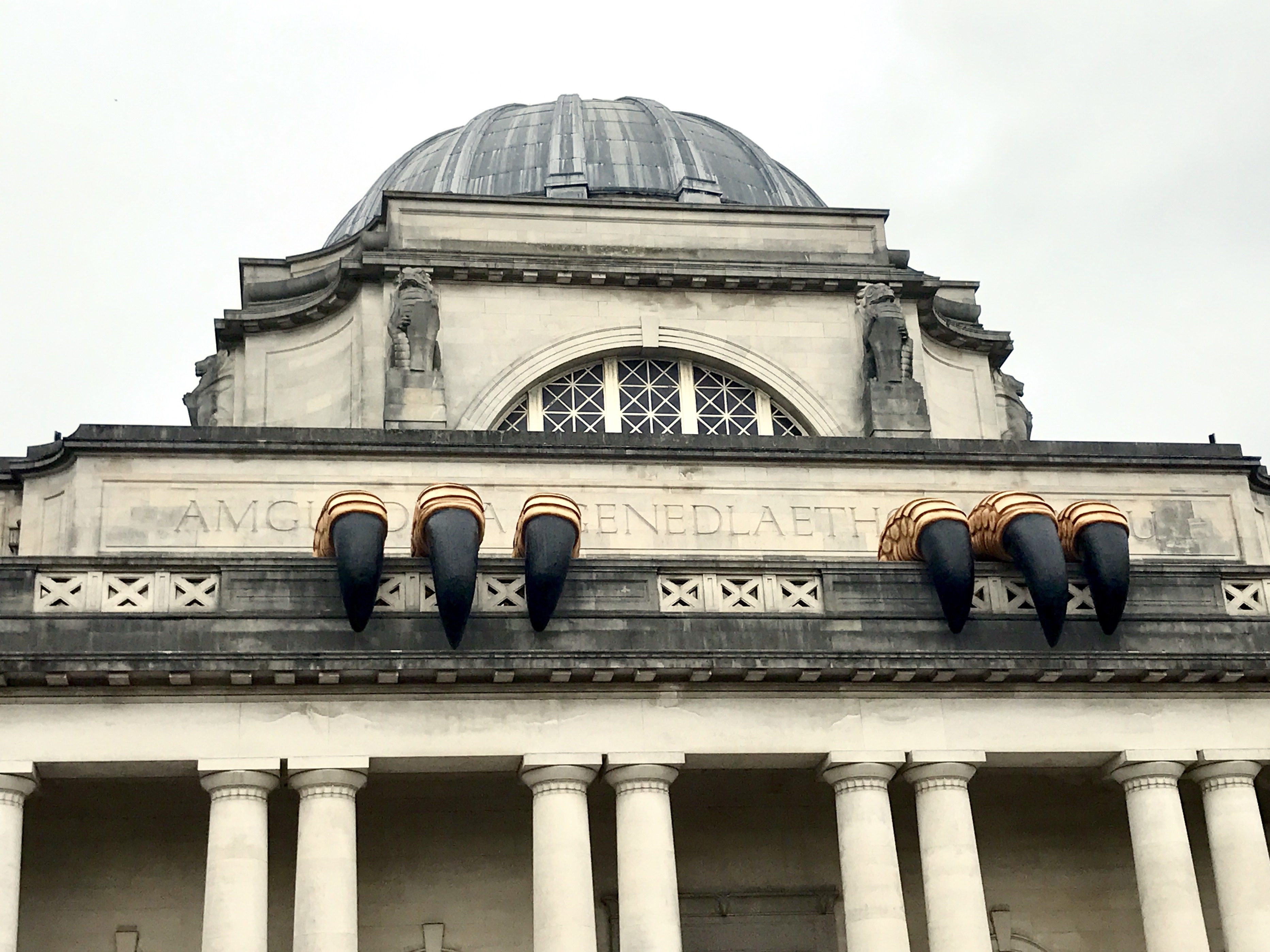 As well as the claws on the museum, according to the Daily Draco newspaper, he’s been spotted at St Fagans National Museum of History also in Cardiff, Big Pit National Coal Museum in Blaenavon and National Slate Museum in Llanberis.

My children have loved seeing the claws on the roof of the museum whenever we head past. They do look pretty impressive.

They couldn’t wait to look for more evidence of dinosaurs and so we visited St Fagan’s National Museum of History for an hour after school on Monday. Perhaps he’s looking for traces of his ancestors. More than 200 million years ago, dinosaurs lived in what is now the museum, with fossilised footprints and bones having been found on the site. 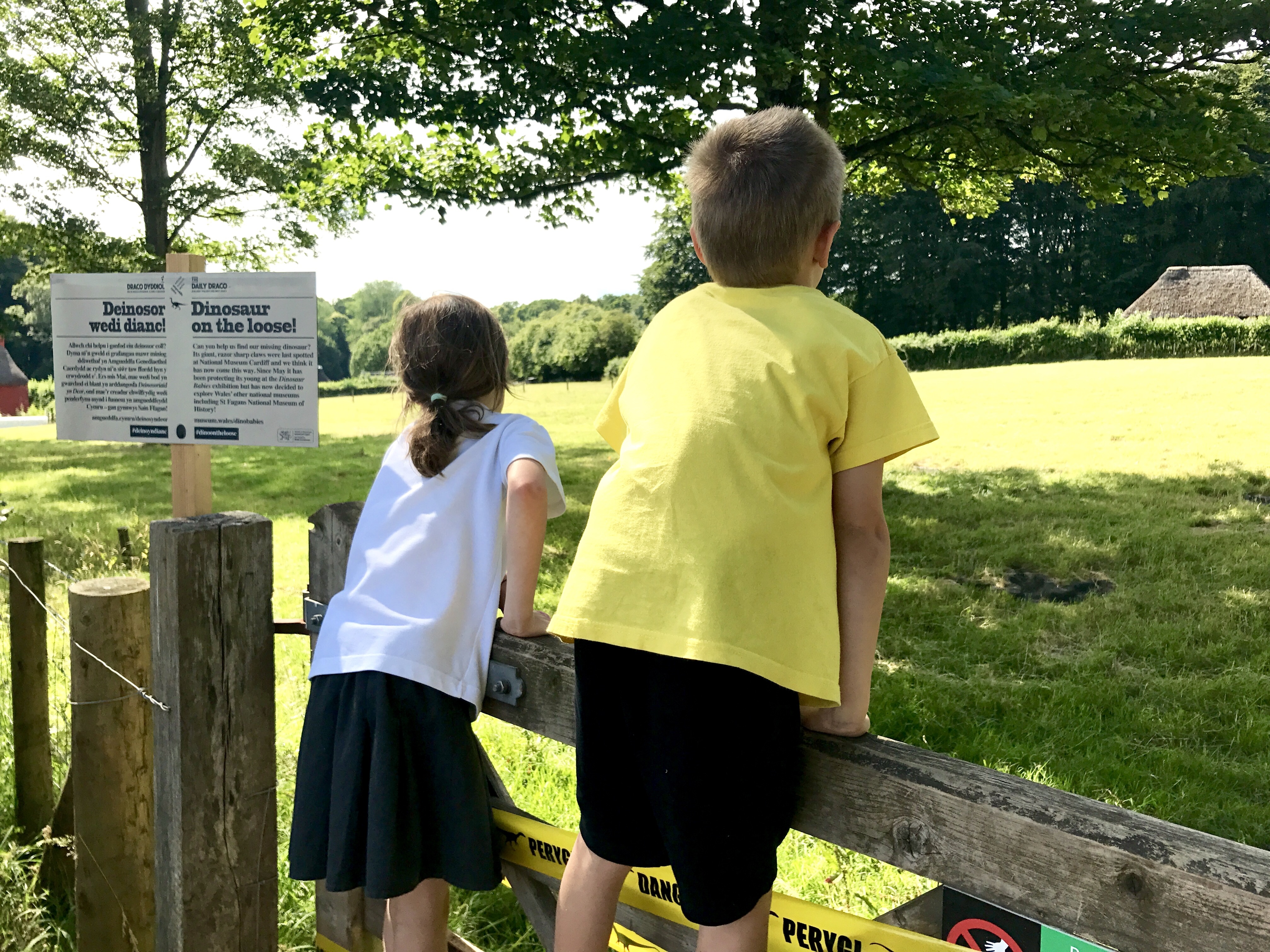 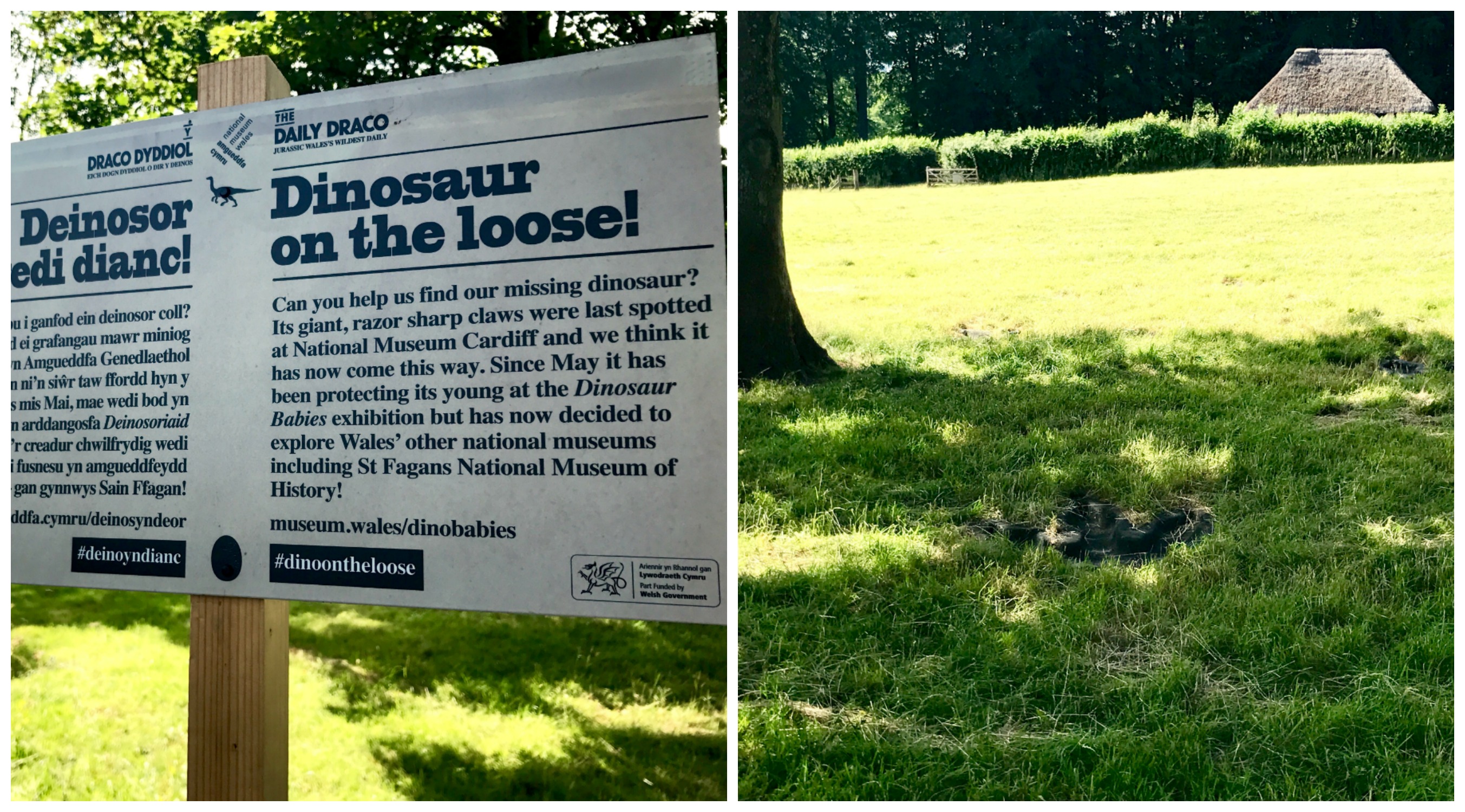 It wasn’t long before we found evidence the Welsh dinosaur had been at the open air museum in the form of a a taped off fence and giant footprints – “just like the ones at the front of the museum, Mummy!” as my children were quick to point out – on the path on the way in, not far from the temporary children’s playground.

The dino has evidently been having great fun exploring the living history museum – we spotted his tail sticking out of Llanfadyn Cottage, the 18th century stone building that once stood in Rhostryfan and was home to Ann and Hugh Williams, their six children, a maid and a lodger. You can find it opposite the toll house. 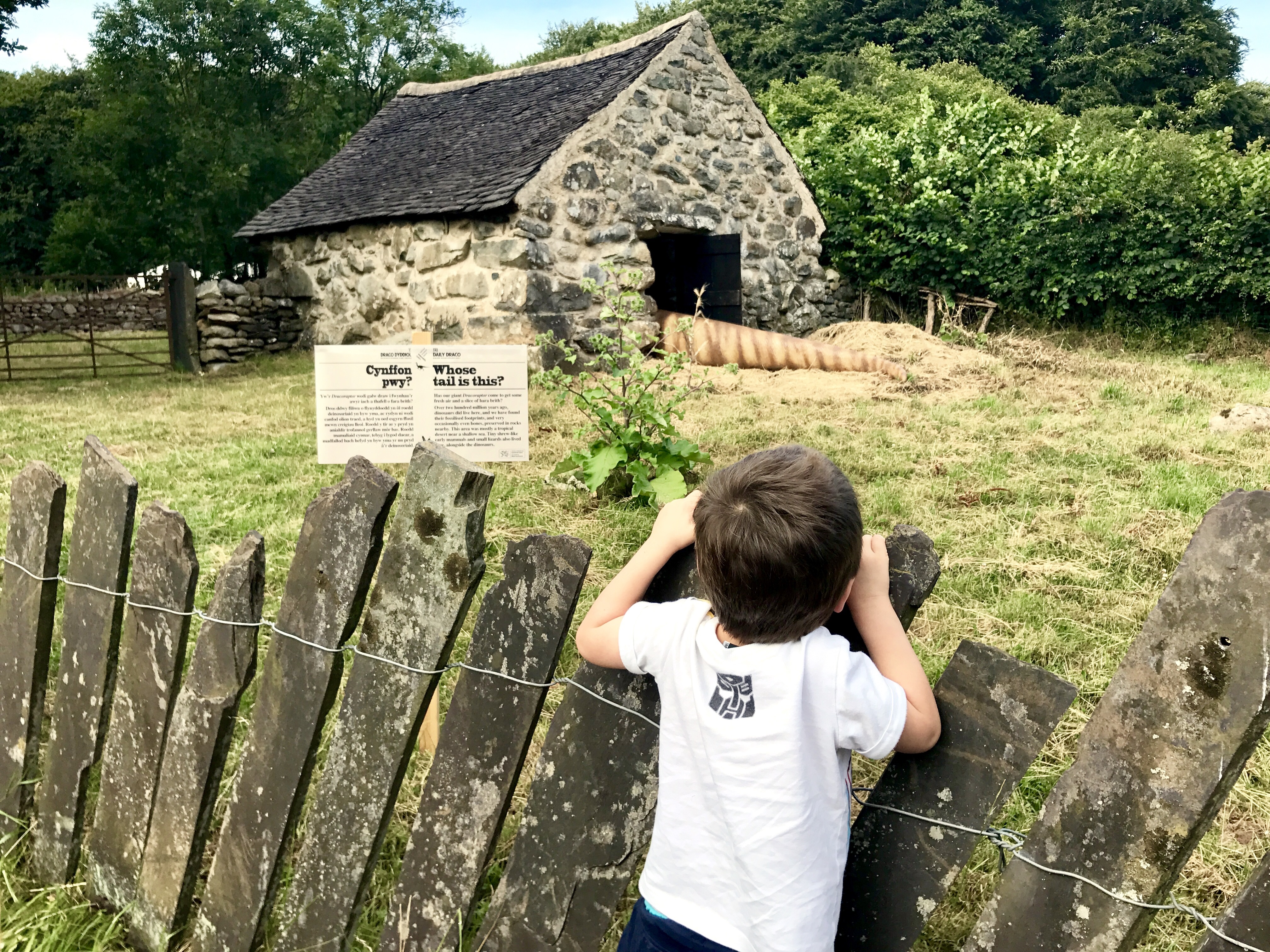 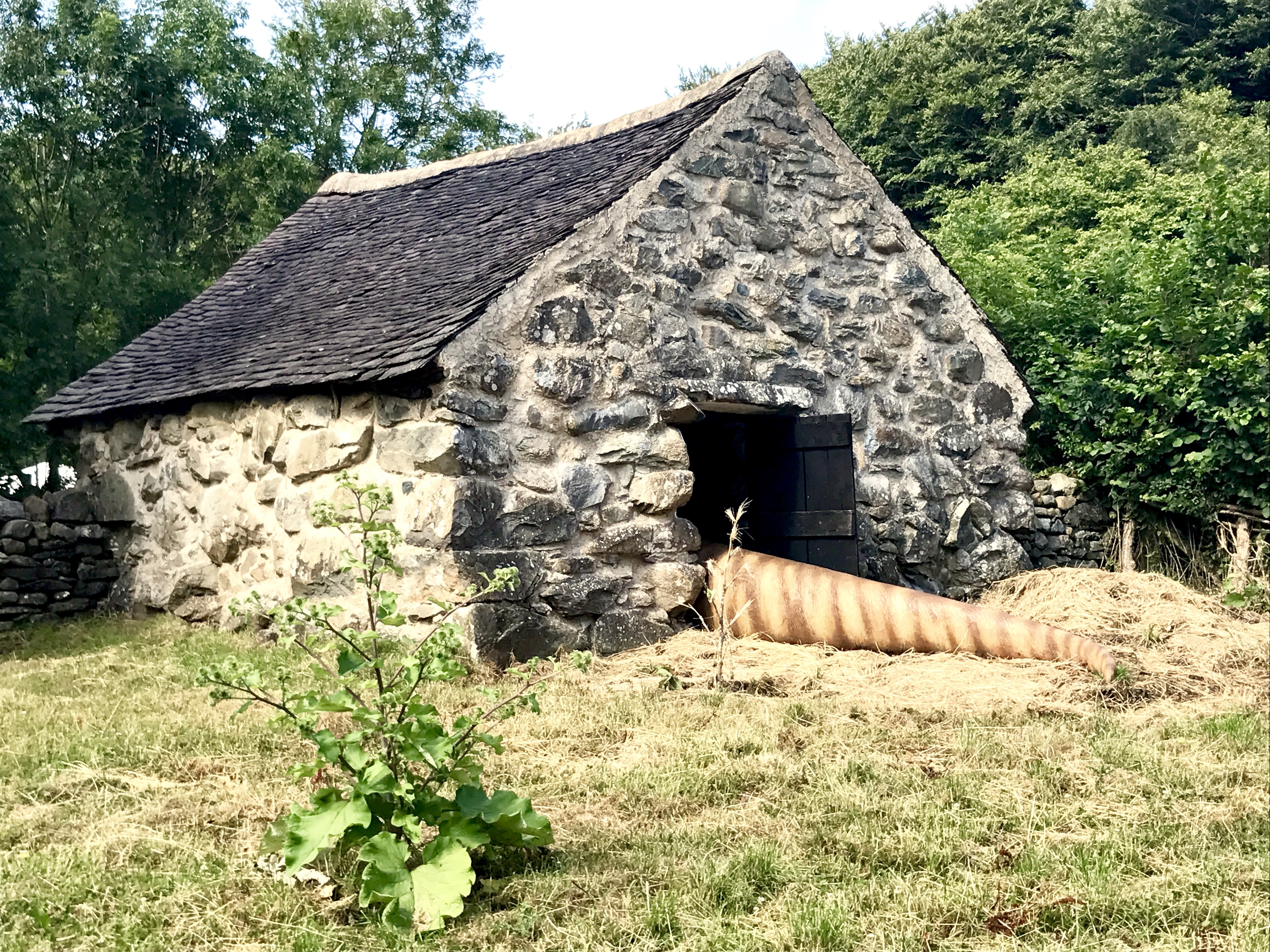 Not far from here, you can also see a huge dino eye peering out from the second floor of the Gwalia tea rooms. 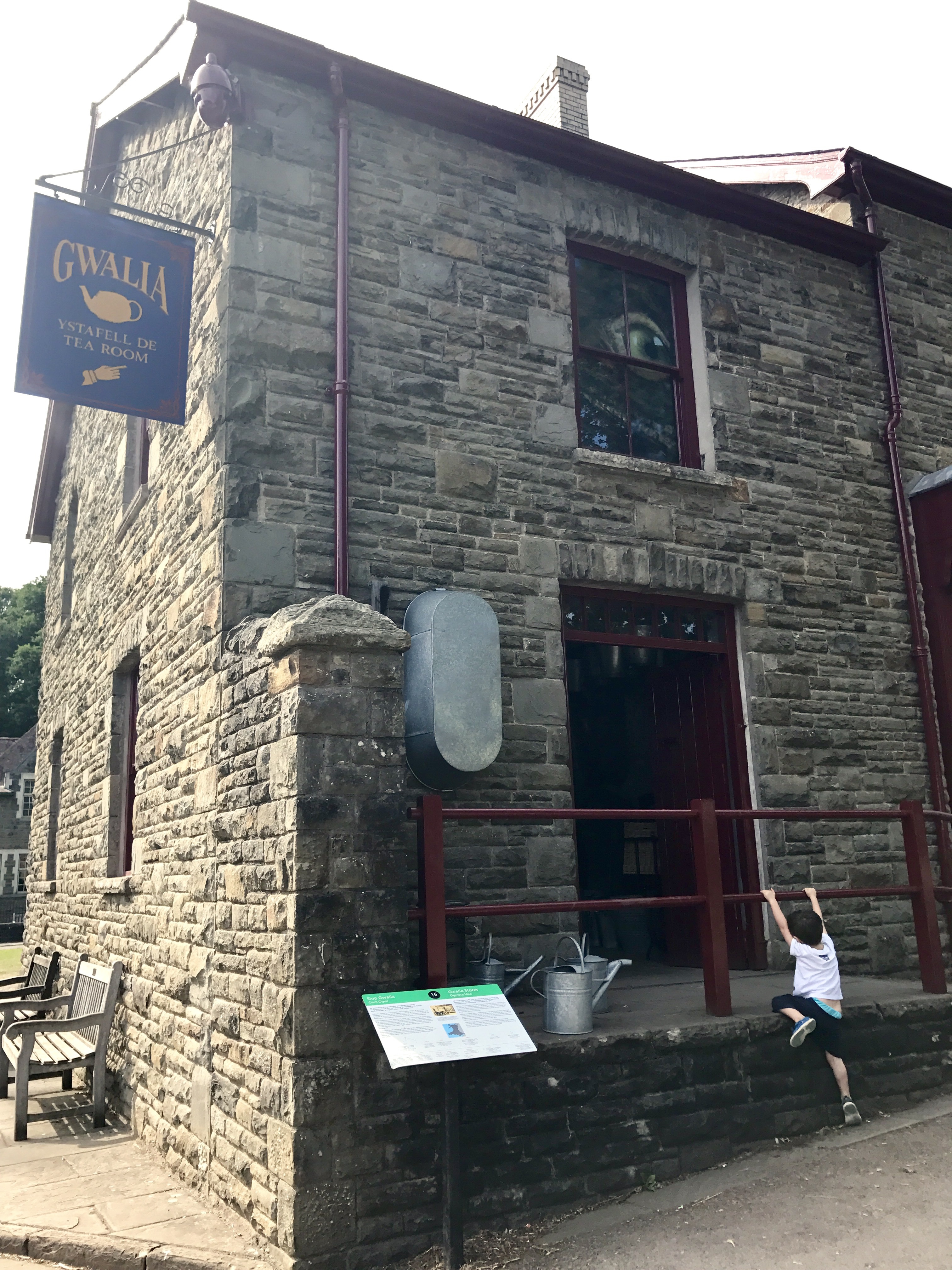 There’s plenty more to see at St Fagans too, with over 100 historical buildings from across Wales on the site. You can read our review here. This Friday also sees the opening of the new atrium and entrance area, as part of a huge redevelopment at the museum.

The dino has also been spotted at Big Pit National Mining Museum in Blaenavon. We visited recently (you can read our review here) but it looks like we’ll have to head back over the summer to see what evidence of dinosaurs we can find. In North Wales, there’s evidence of the dino at the National Slate Museum in Llanberis. We’re not planning any trips to that part of Wales any time soon… so do let me know if you find him!

Have you found the #DinoOnTheLoose this summer? Do let me know in the comments below, on the Cardiff Mummy Says Facebook page or by tweeting me on @cardiffmummy