This is a paid collaboration with The Royal Mint Experience

The 50p coin is, according to Matthew, our tour guide at The Royal Mint Experience in Llantrisant today, the most-collected UK coin. More of us than ever before are squirreling away the seven-sided silver coins because we can’t get enough of the limited-edition designs on their reverse. Some of us keep them because we love the pictures and don’t want to part with them; others are hoping their rarity will make them worth a small fortune in the future. Either way, coin collecting is not just the pursuit of serious hobbyists these days, but a public passion (and I include my own family here).

Matthew tells us a real turning point came with the excitement surrounding the release of 29 coins to celebrate the 2012 London Olympics and Paralympics, each featuring a different sport on the reverse. Since then there has been a collection featuring Beatrix Potter’s much-loved Peter Rabbit characters; one dedicated to Sir Isaac Newton, who as well as being one of the world’s most famous scientists was also Master of The Royal Mint from 1696 to 1727; a Paddington Bear 50p – and as of earlier this month, The Gruffalo.

The coins were released earlier this month to celebrate the 20th anniversary of the publication of the much-loved Julia Donaldson and Axel Scheffler picture book.

Sadly the limited edition coins sold out almost immediately and they won’t be going into general circulation so it’s unlikely my children will be adding one to our growing collection of 50ps any time soon.

But The Royal Mint Experience – which is based at The Royal Mint in Llantrisant and is just a 25-minute drive from Cardiff – is celebrating all things Gruffalo this February half term with fun and lively storytelling workshops based around the famous book. 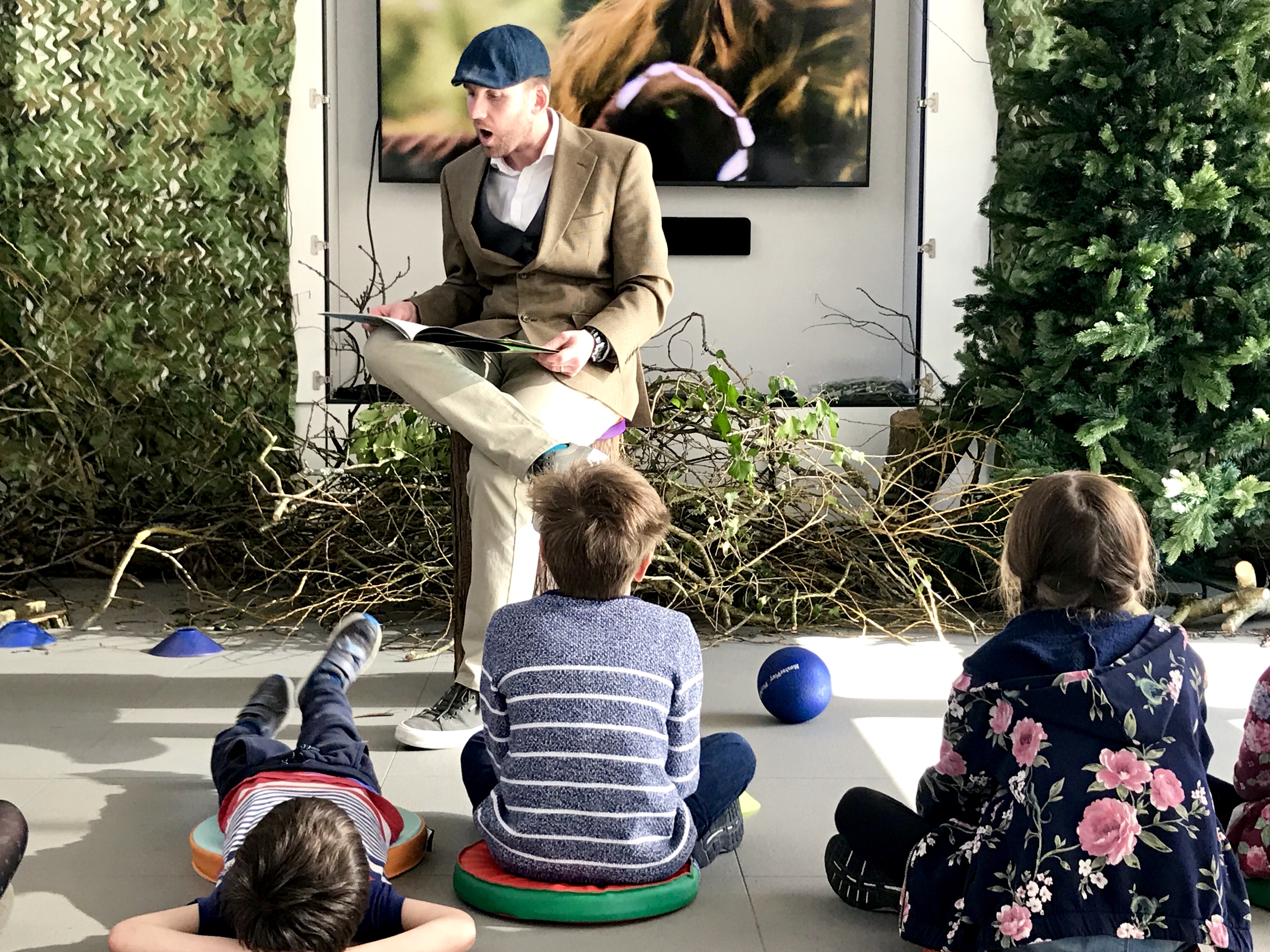 The Gruffalo workshops take place in a large and airy space past the café. Little ones are invited to sit at the front of the room which has been taken over by a woodland scene featuring real trees and leaves. There are chairs for grown-ups and a play area for younger siblings who aren’t quite ready to take part themselves. 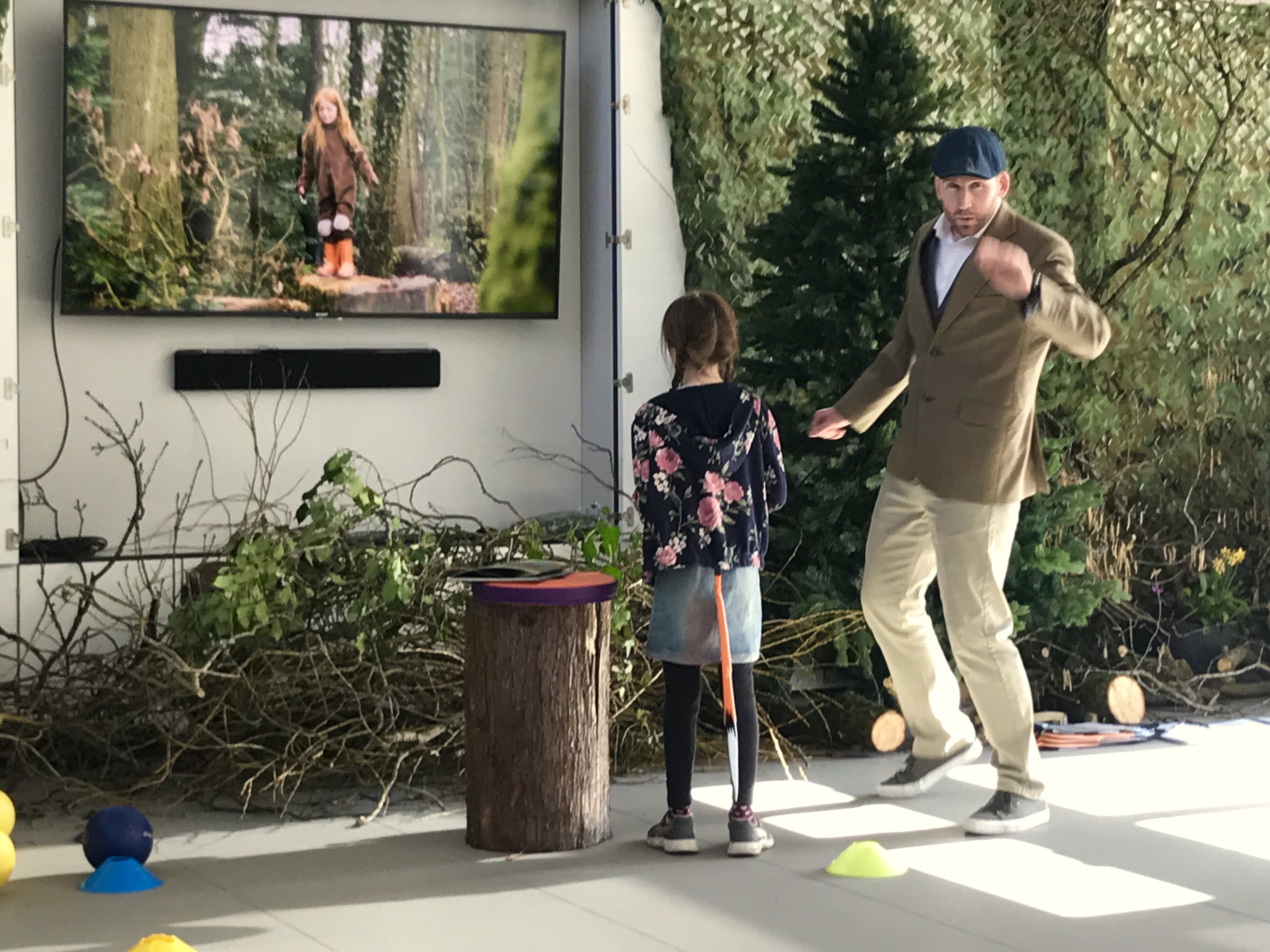 A lively storyteller introduces himself to the children and begins the famous story. Each time we meet a character from the book we stop to play a Gruffalo-themed game. These include What’s The Time, Mr Fox? where the children take on the role of the mouse trying to outwit the fox before he can shout that it’s dinner time; Owl in the Open, where the team of mice have to throw acorns (soft balls) at the owls; and a tag-style game called Slip Away from Snake. In between the games the story is read with much enthusiasm and some great voices. Naturally the children join in enthusiastically with this modern classic. 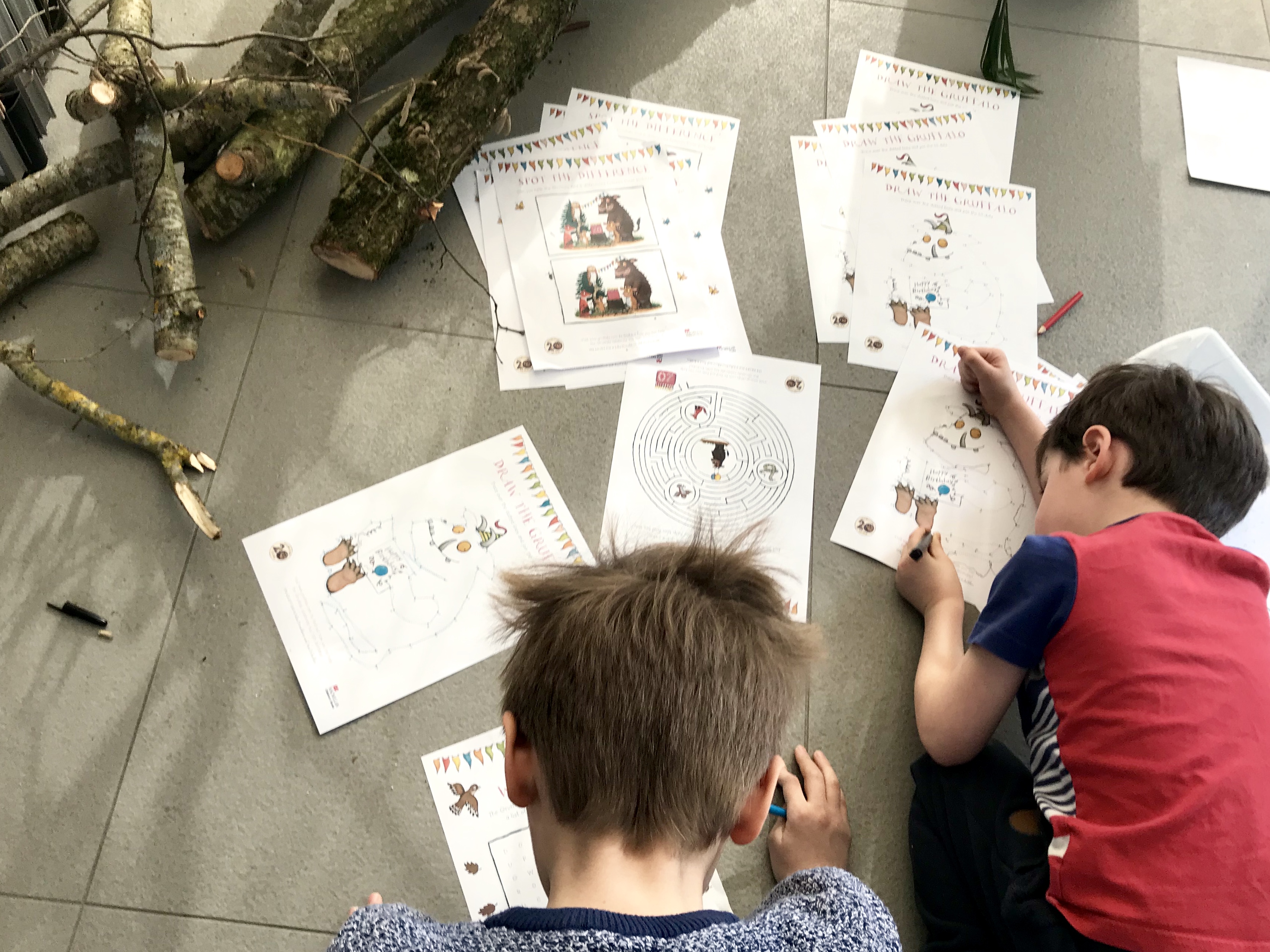 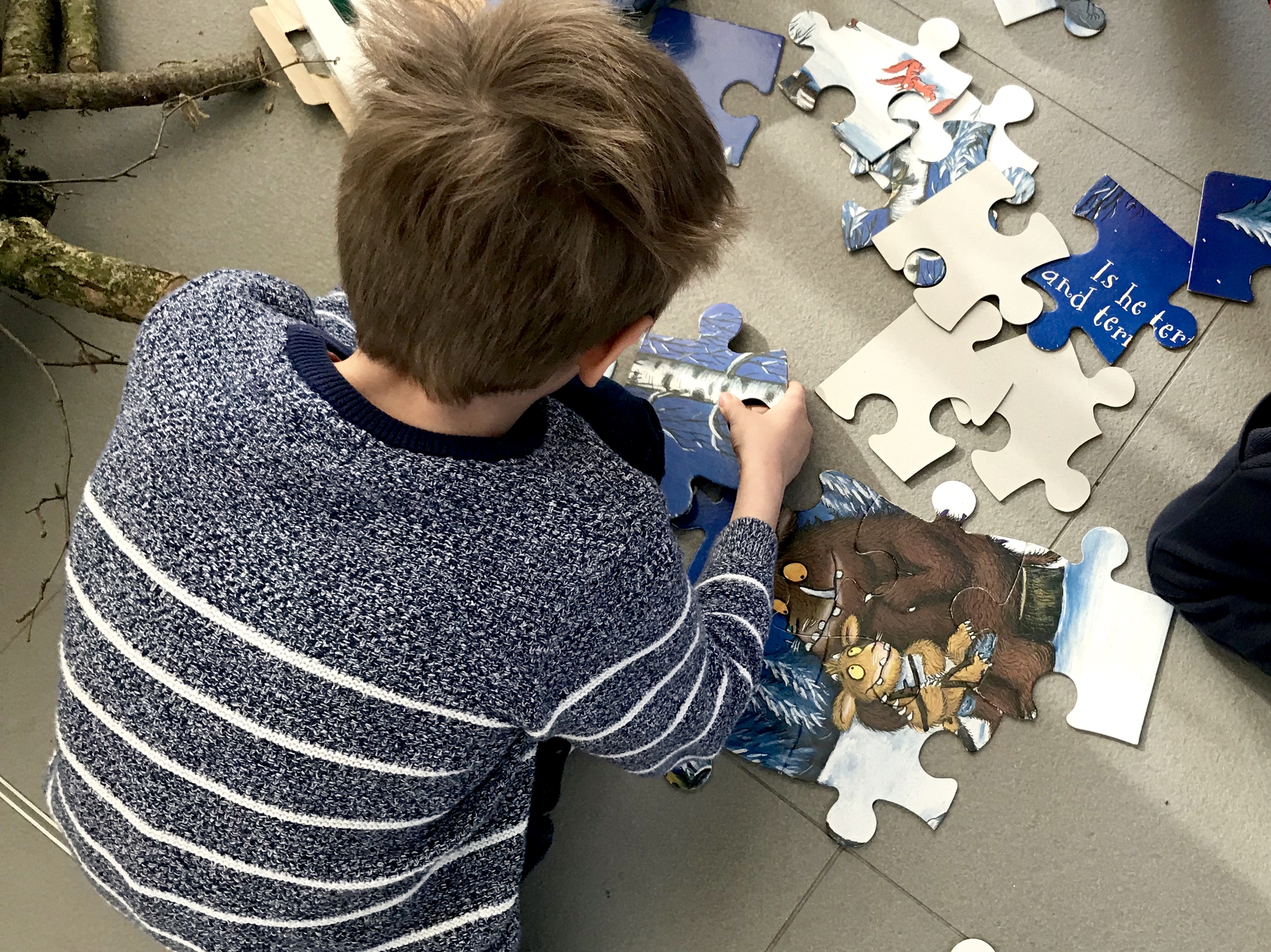 After we’ve finished the book, the children are directed to a selection of Gruffalo colouring and activity sheets and jigsaws. There’s even a chance to win prizes if you upload your child’s own drawing of the Gruffalo to social media and tag The Royal Mint Experience as directed on the sheets.

I knew my four year old youngest son would love the workshops but I wasn’t sure what my nine year old daughter and seven year old son would make of it. Actually, they loved it too. The games were fun for all ages and as two of the eldest children they enjoyed helping the younger ones out. It was a great addition to the tour (which we’ve been on previously) and a lovely, engaging activity for half term. 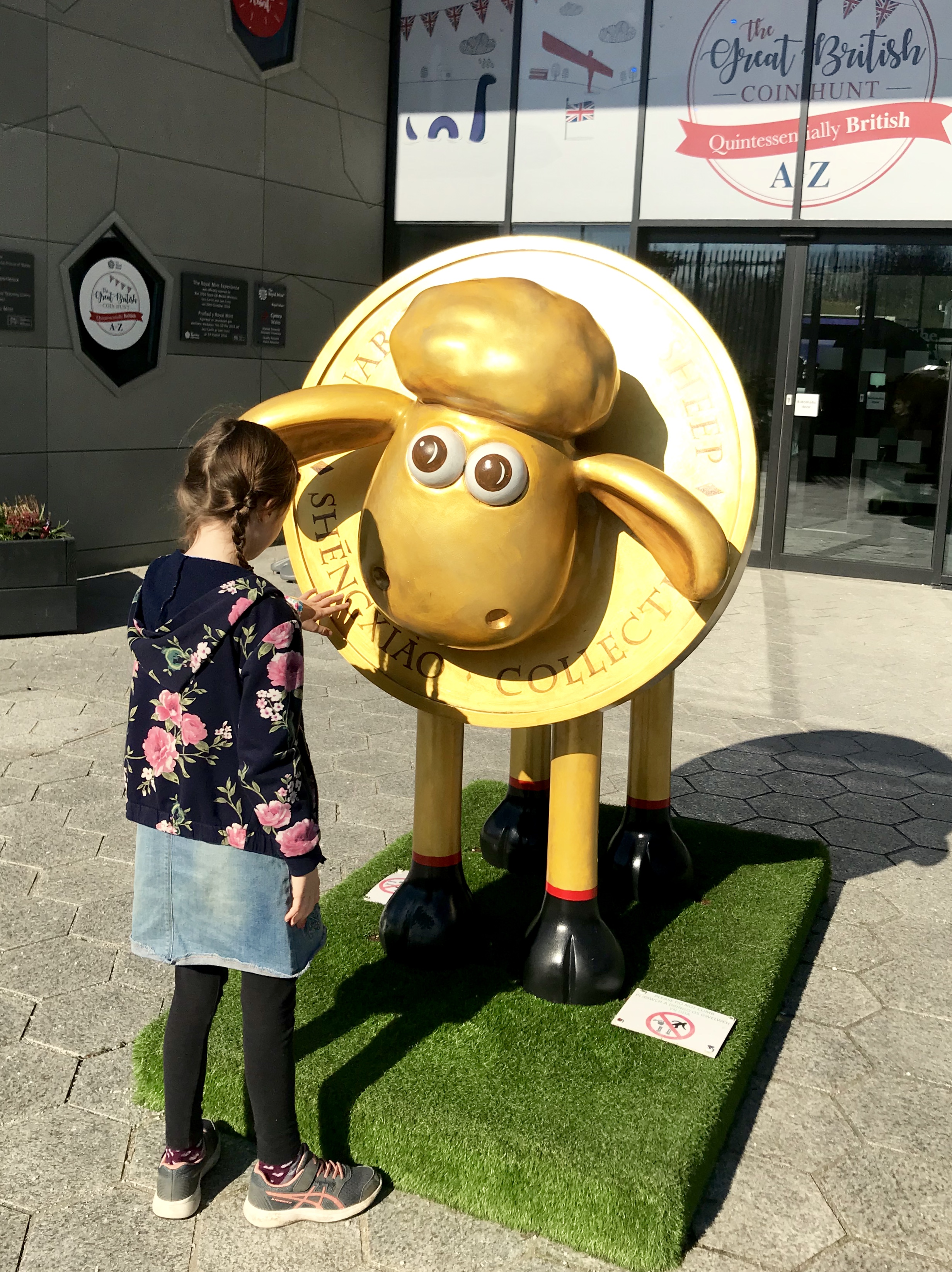 The Royal Mint Experience tour itself is fascinating. We’ve been on it once before, not long after it opened in 2016, but it’s great to come back now that my children are a little older. We all find it incredible to think that every single British coin in circulation was made right here in South Wales. Not to mention coins for up to 80 countries across the world. The Royal Mint is the biggest in the world, with a 24/7 operation that sees it producing 90 million new coins a week. 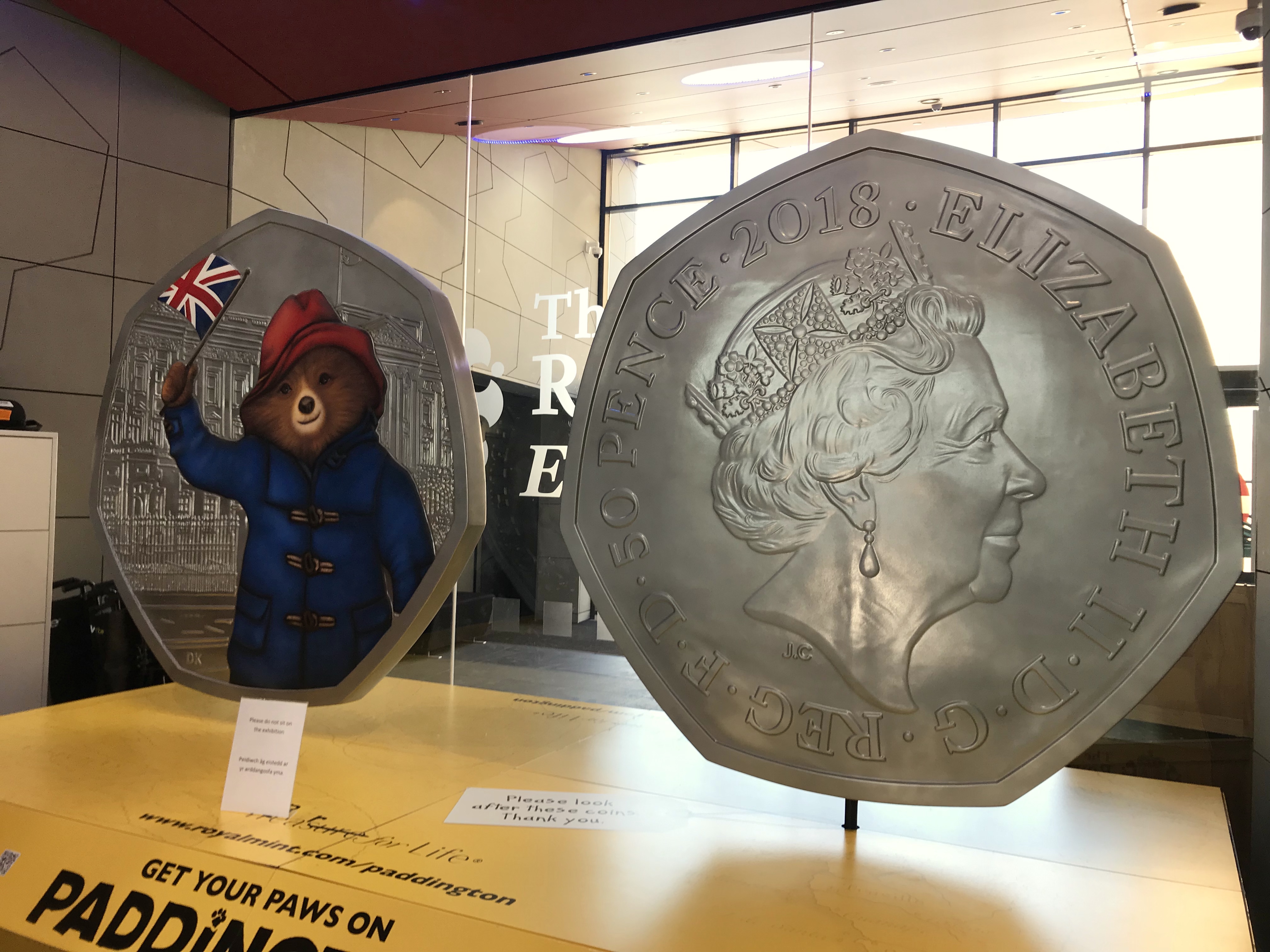 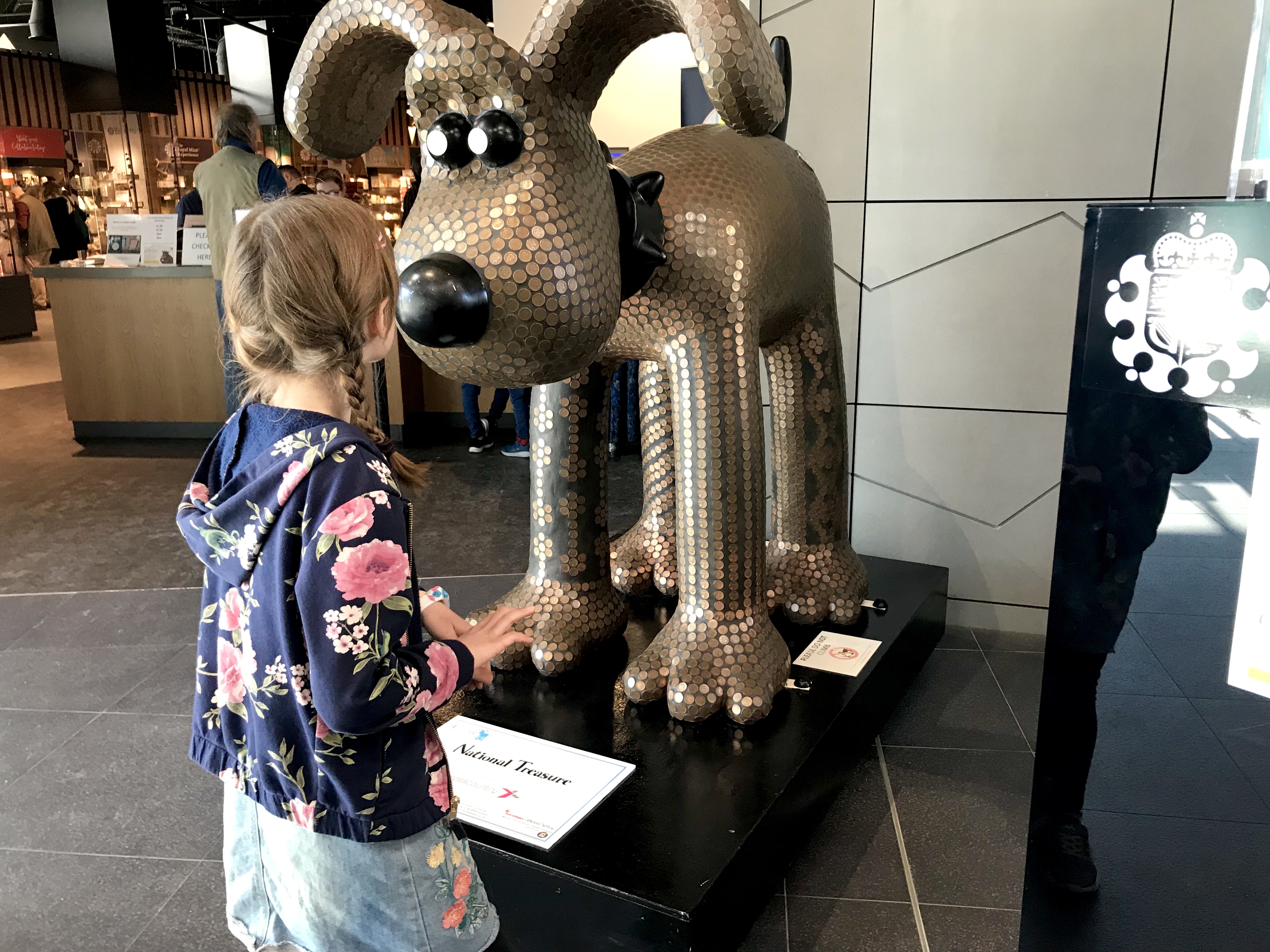 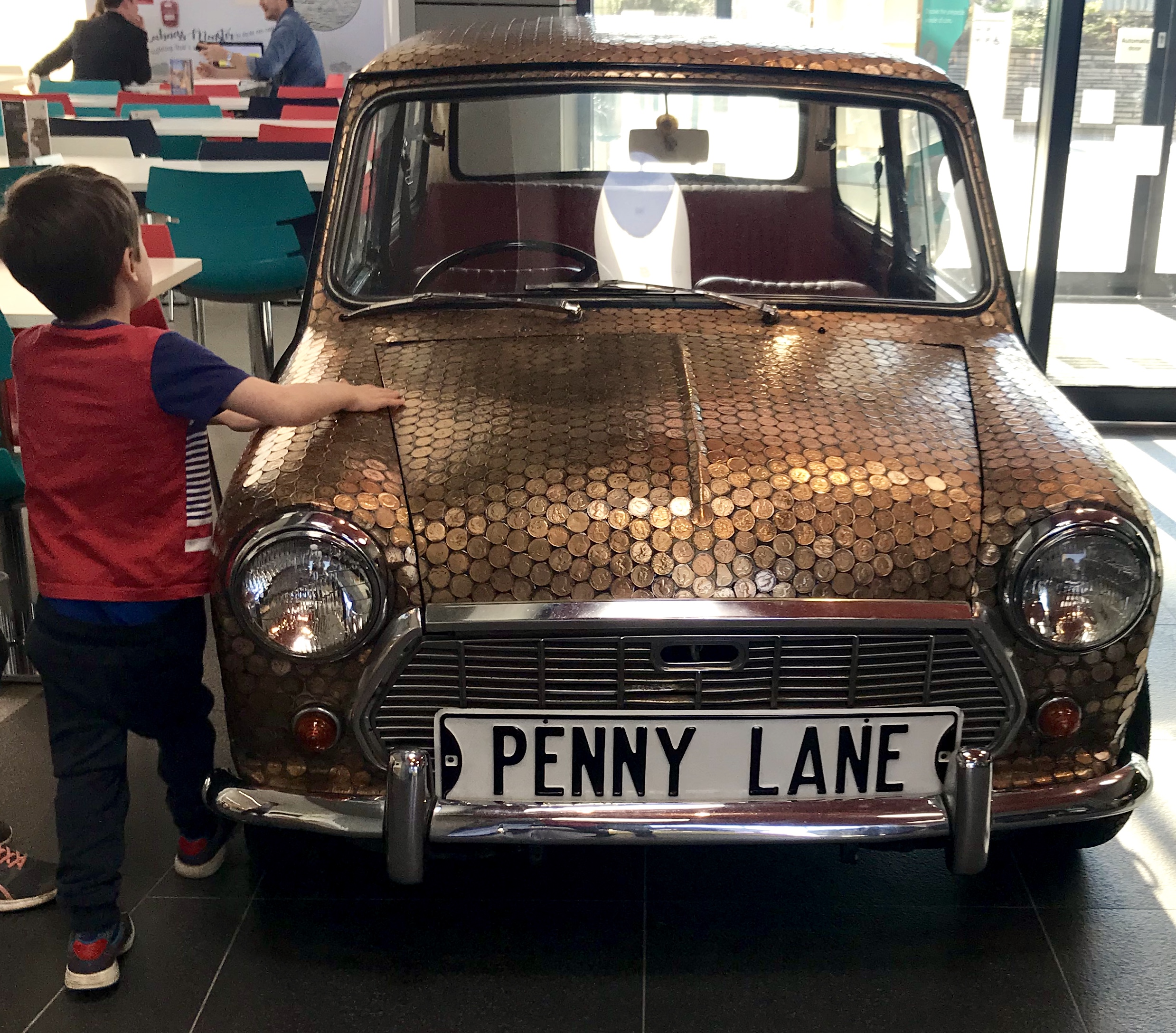 The guided tour takes around 45 minutes and you can see the very rooms where coins are being made from behind specially-constructed glass windows. According to Matthew a whole new batch of 20 pence coins had already been made today and the workers were now busy producing Egyptian pounds.

We heard lots about the different processes used to produce and shape the coins, as well as how the designs are imprinted. We could see thousands of coins being poured from a fork lift truck into one of the machines, as well as workers bagging up coins. For an additional charge there’s even a chance to press your own 50p coin (with a combination of design and date that won’t be in general circulation) using the same technology. 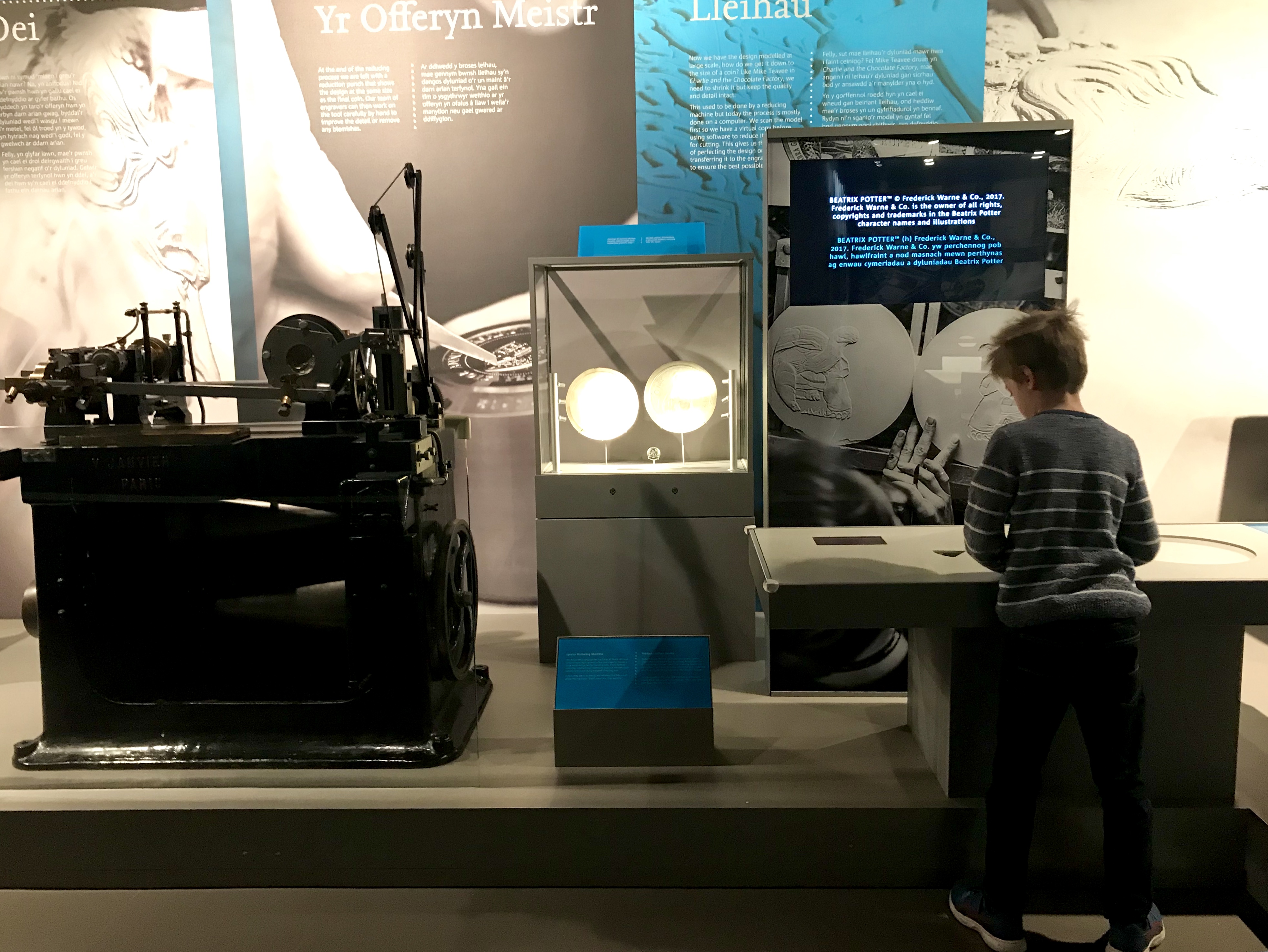 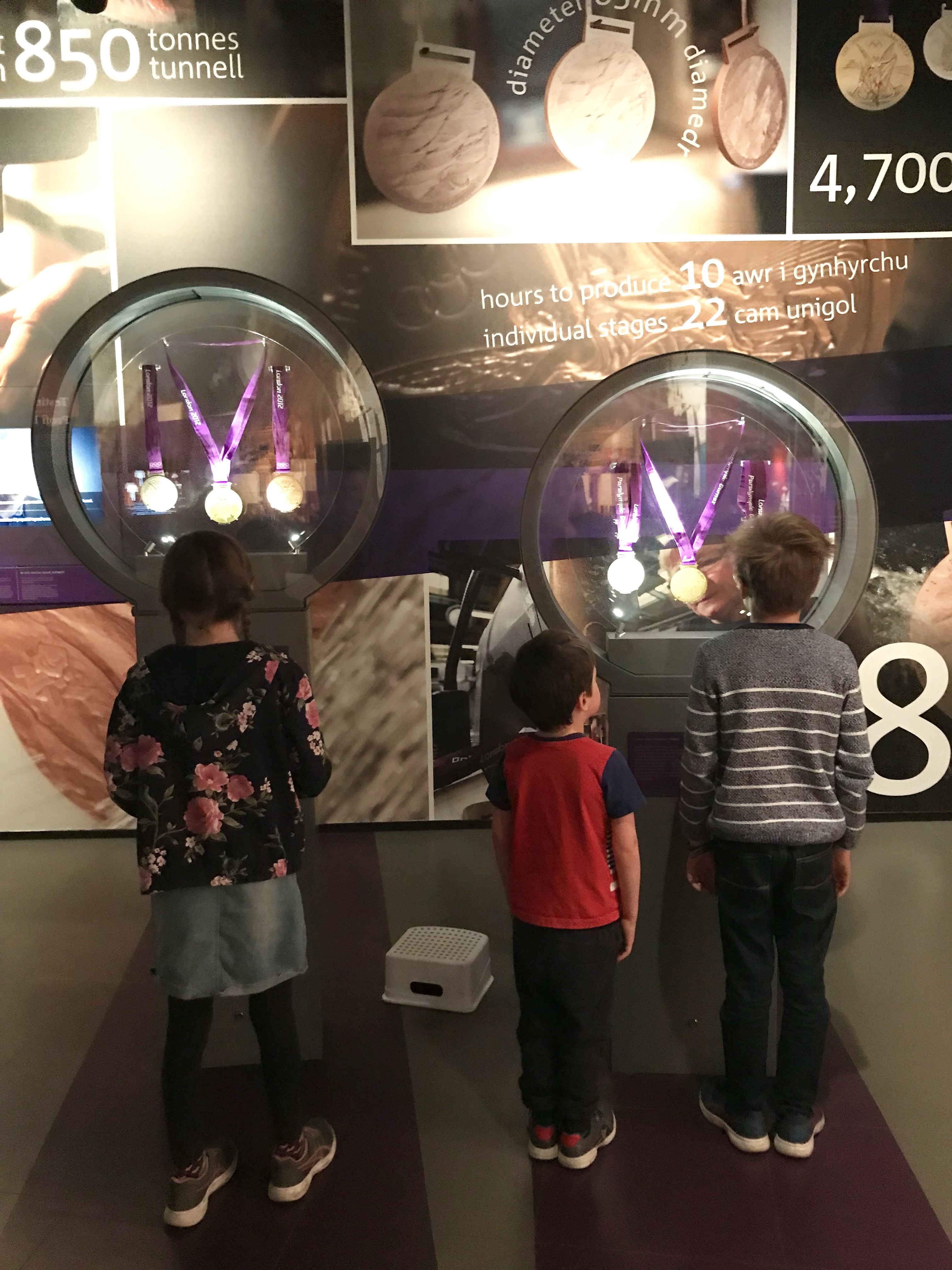 Visitors are not permitted to take photos within the coin production area itself for understandable security reasons so I can’t show you what that part of the experience looks like. However you can take photos inside the exhibition area, which is a fascinating insight into the history of the mint and British coins. We loved seeing the very first coin ever made at Llantrisant – a 1p coin pressed by Queen Elizabeth II herself when the Mint was opened in 1968. It originally opened to help prepare the country for decimalisation in February 1971, but slowly under the direction of James Callaghan, MP for Cardiff, all coin production was moved from to Llantrisant from London. Previously, it had been at Tower Hill in London from 1812 and before that, the Tower of London from 1279. 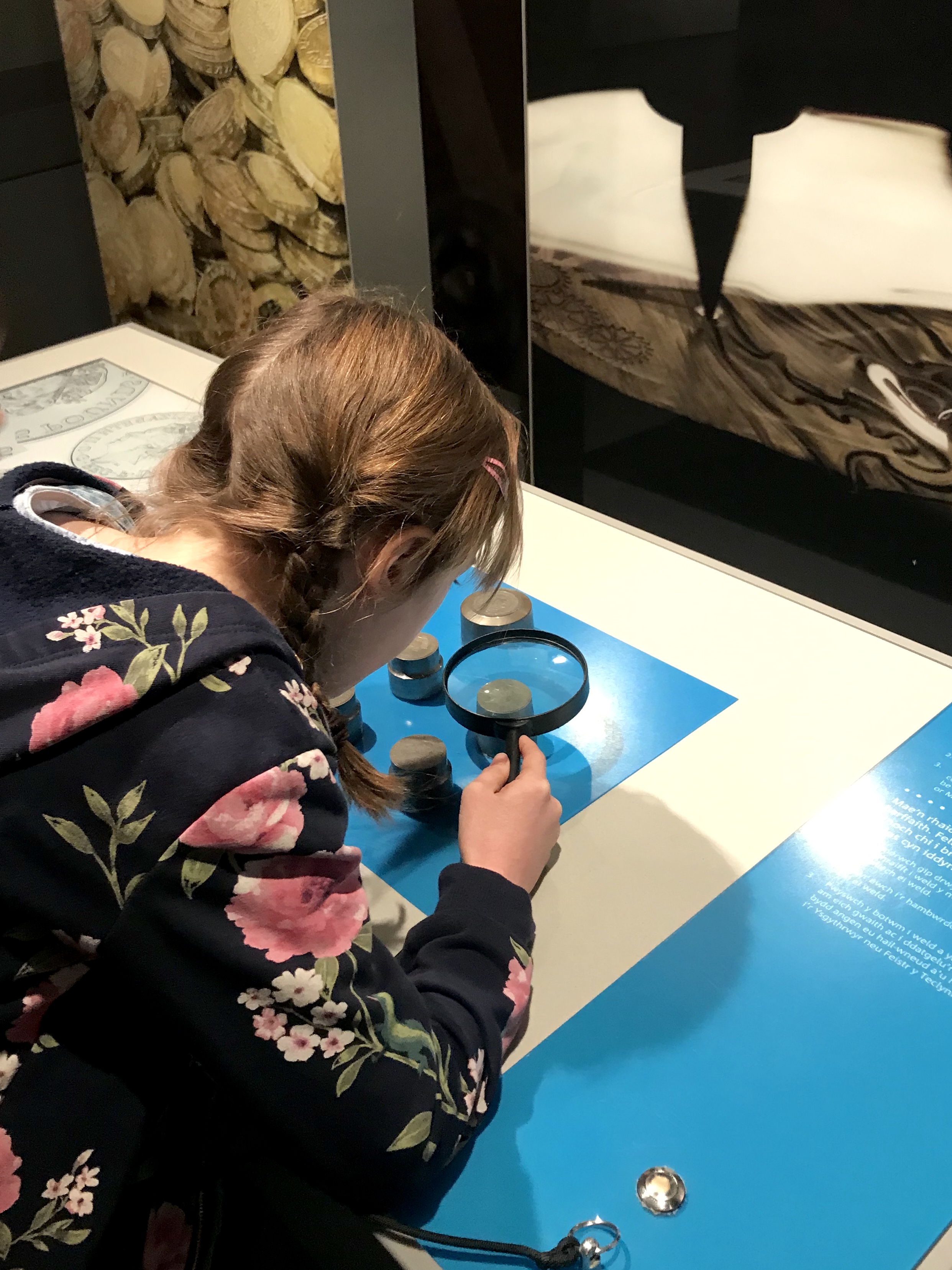 The exhibition packs in so much information that grown ups without children could spend a good hour in there easily. We were there for around half an hour. My two eldest children were quite absorbed in all the information but my youngest isn’t perhaps quite old enough to appreciate it all.

Walls are brightly painted full of facts and figures and there’s a video to watch showing the coin production process, as well as various machines used in the past for coin production. My children loved seeing the two cases featuring 2012 Olympic medals – they were all made in Llantrisant – as well as the huge display featuring coins from all around the world that have been made at the Royal Mint. My seven-year-old son loved all the different shapes and sizes. 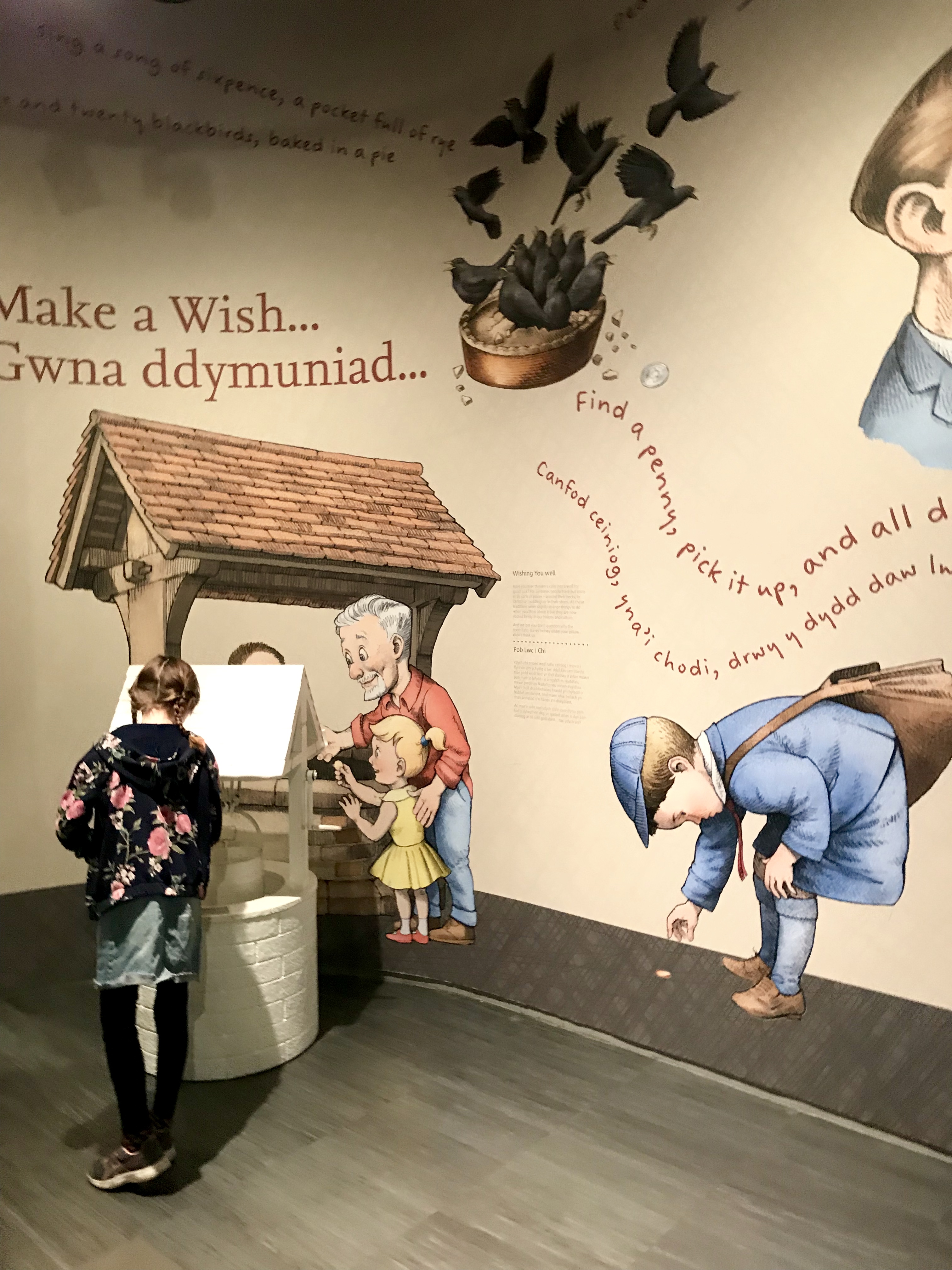 The Penny Lane Mini car made famous by the Beatles and the penny-covered Gromit in the ticket office area, and the Shaun the Sheep outside the main entrance, are hugely popular with visitors taking photos and a great talking point.

We might not be able to get our hands on a Gruffalo coin – but the family storytelling workshops were a great addition to an already fascinating and informative introduction to how our coins are made. 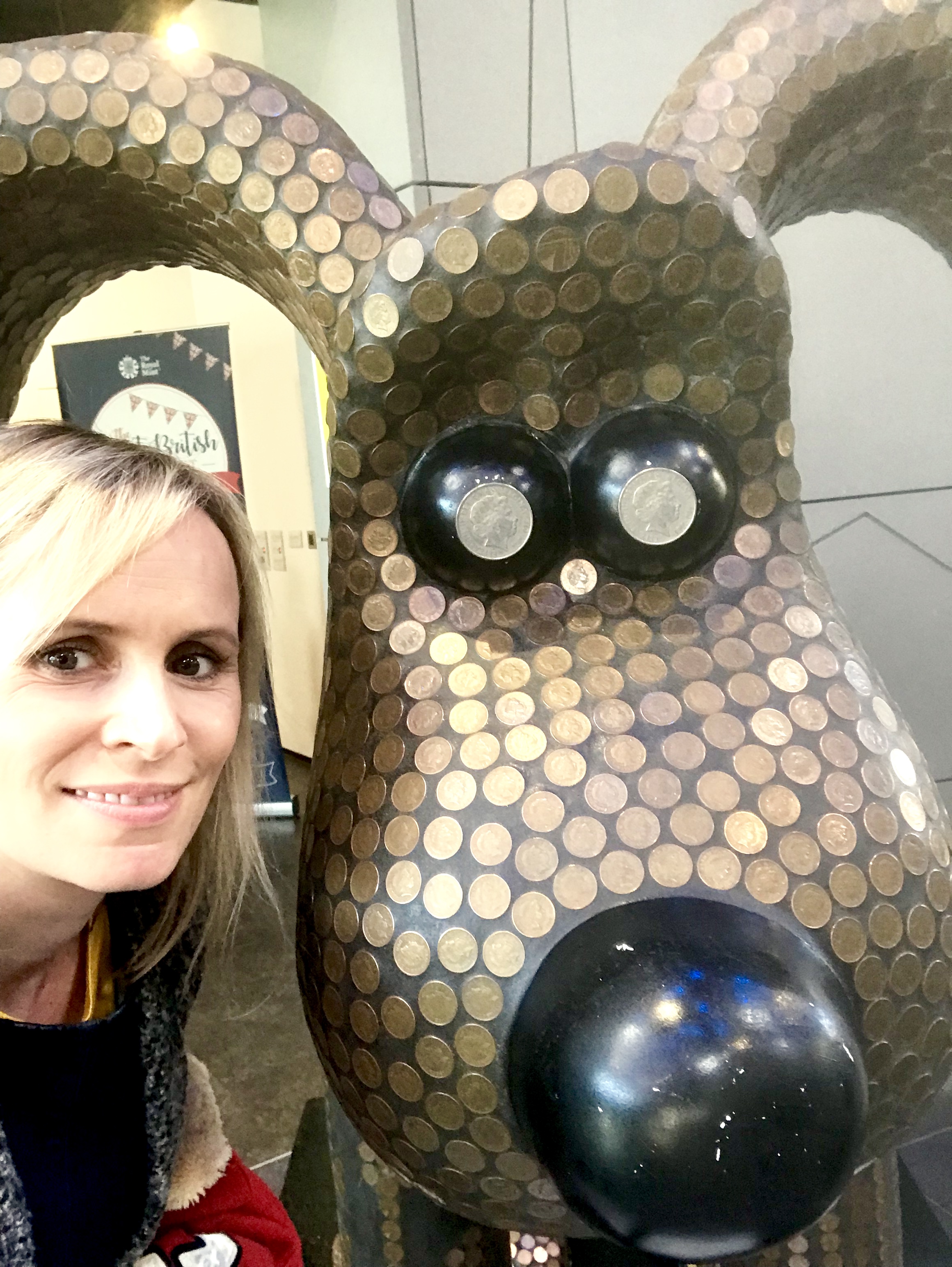 You can also swap your regular 10ps (or in fact any change) to collect up to five limited edition 10p pieces per person as part of the Great British Coin Hunt. This sees 26 different coin designs each one with a different letter of the alphabet celebrating something quintessentially British. 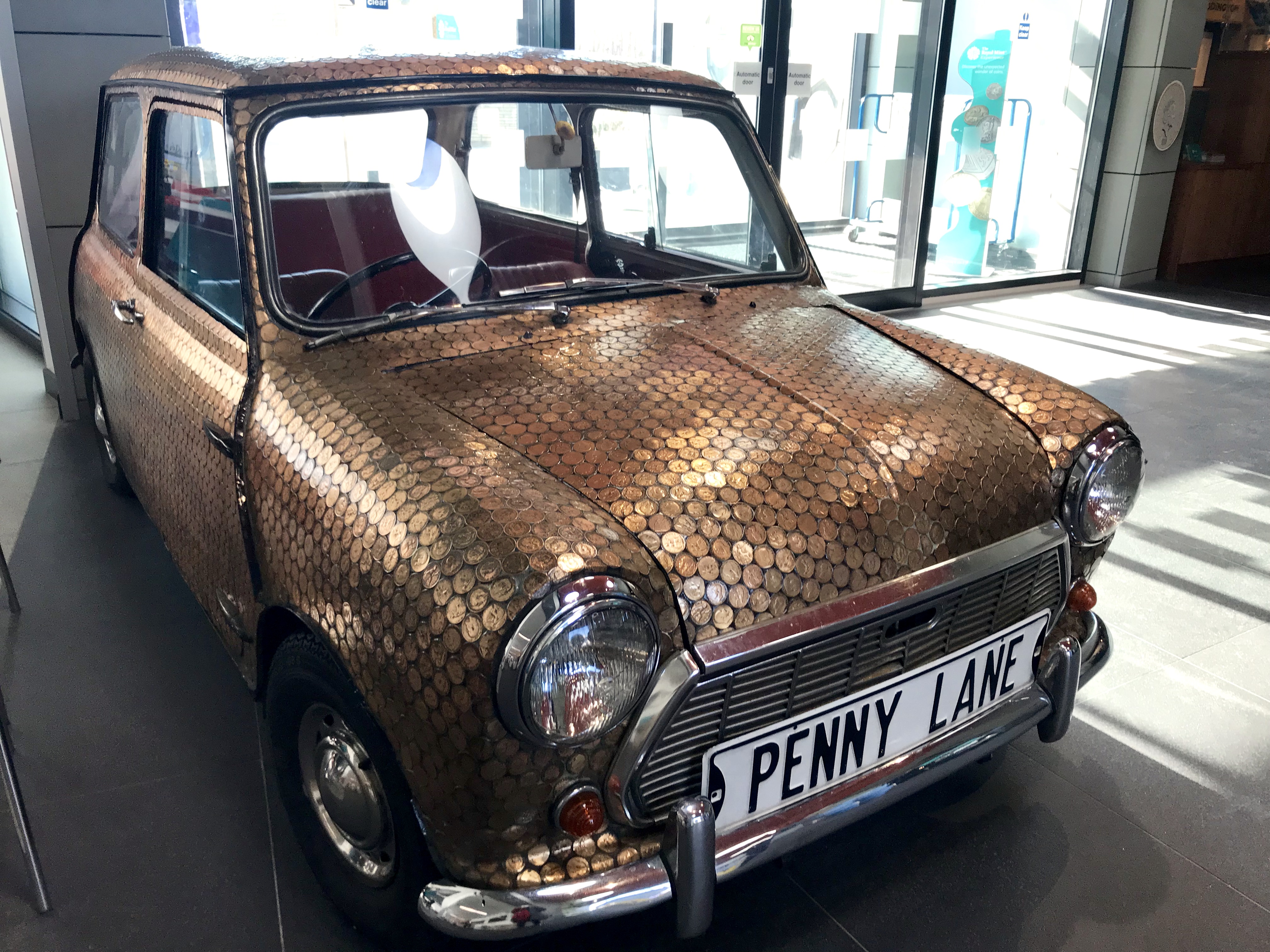