When Shake Shack Cardiff invited us along to review their family dining experience on Friday evening, we were only too happy to accept.

It was mine and Cardiff Daddy’s ninth wedding anniversary that day and, with no available babysitters so we could enjoy a grown-up night out, we thought this would be a lovely treat for the whole family.

Based on the second floor of St David’s shopping centre in Cardiff, Shake Shack is an American chain, slowly growing in the UK. It started life as a hot dog cart in Madison Square in Manhattan and was so successful, they soon found a permanent base – and grew and grew. The company now has branches across America and worldwide, including Japan, Russia, Turkey and the Middle East. The Cardiff restaurant opened in December 2015 and is the first in the UK outside London. 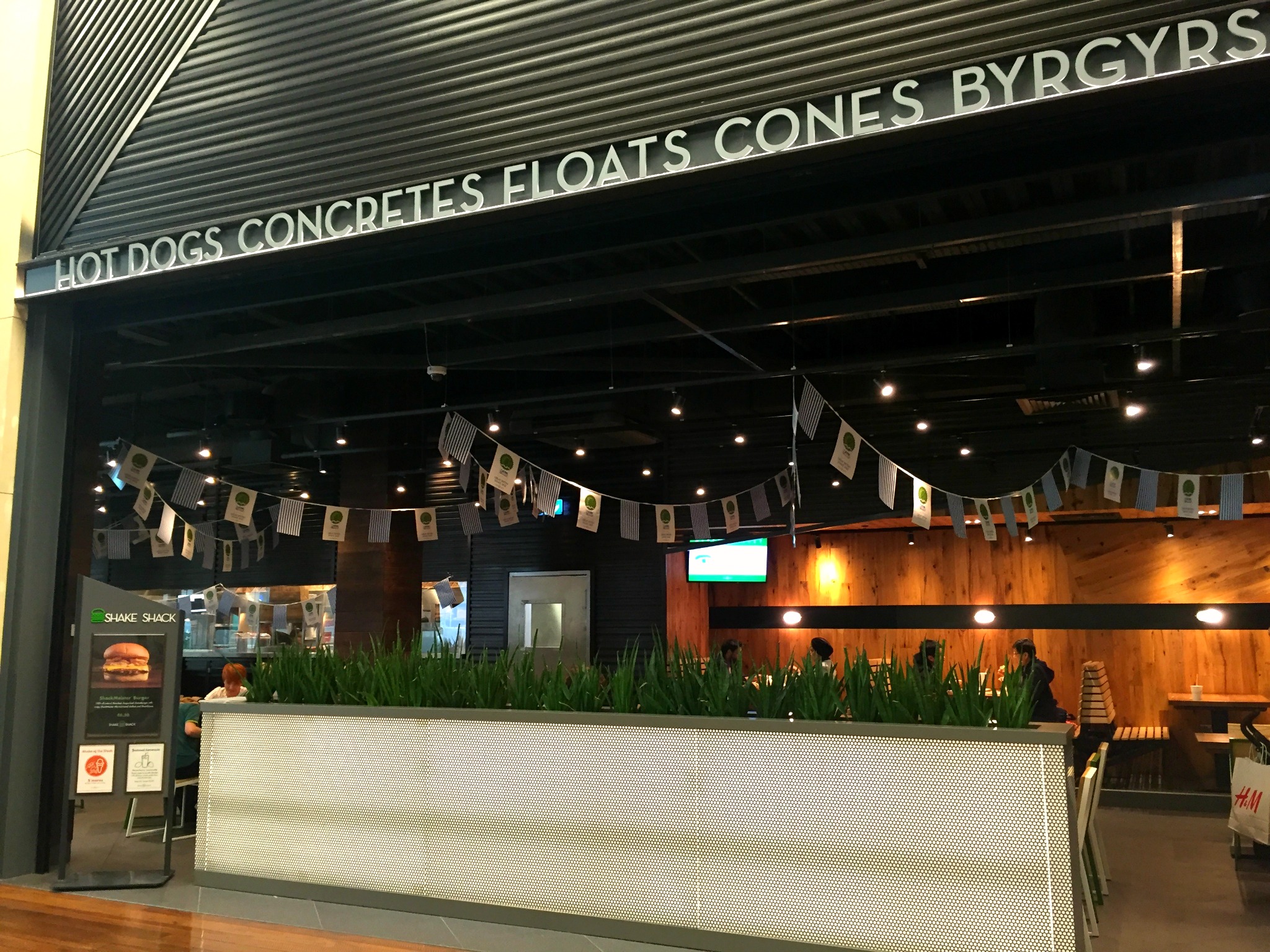 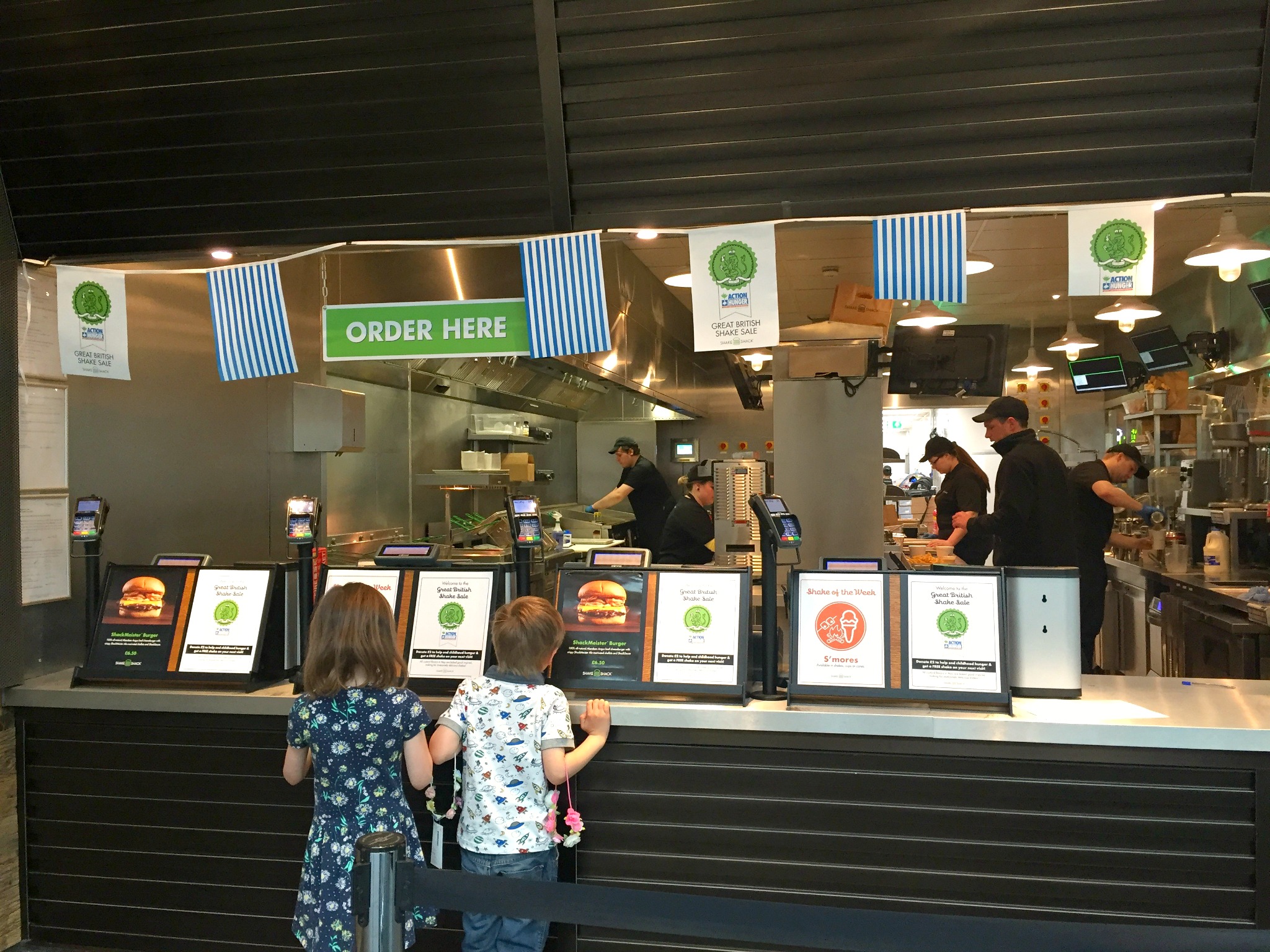 They still retain a flavour of the original concept, with a casual dining environment and a till-point ordering service, where you’re given a buzzer that lets you know when your food is ready. My children thought the buzzer was brilliant, and I was pleased the food came within four or five minutes – because as all parents of young kids will know it’s not always easy entertaining hungry and excited children.

The menu is all hot dogs and burgers, and the shakes and concretes (a frozen custard alternative to ice cream) the chain has become famous for.

We placed our order with Jodie, who was really helpful in telling us which items she recommends and different dessert combinations that are popular with customers. 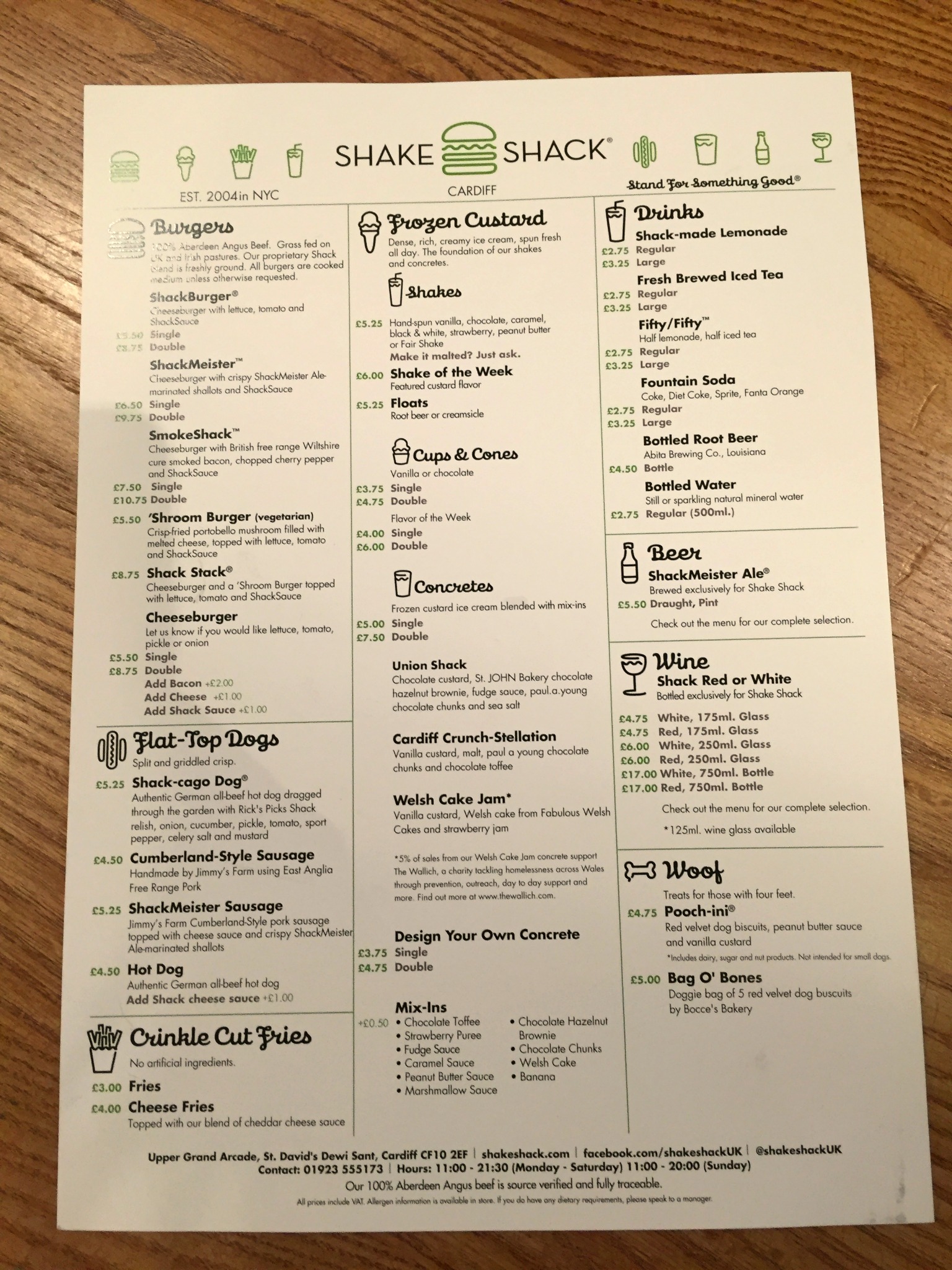 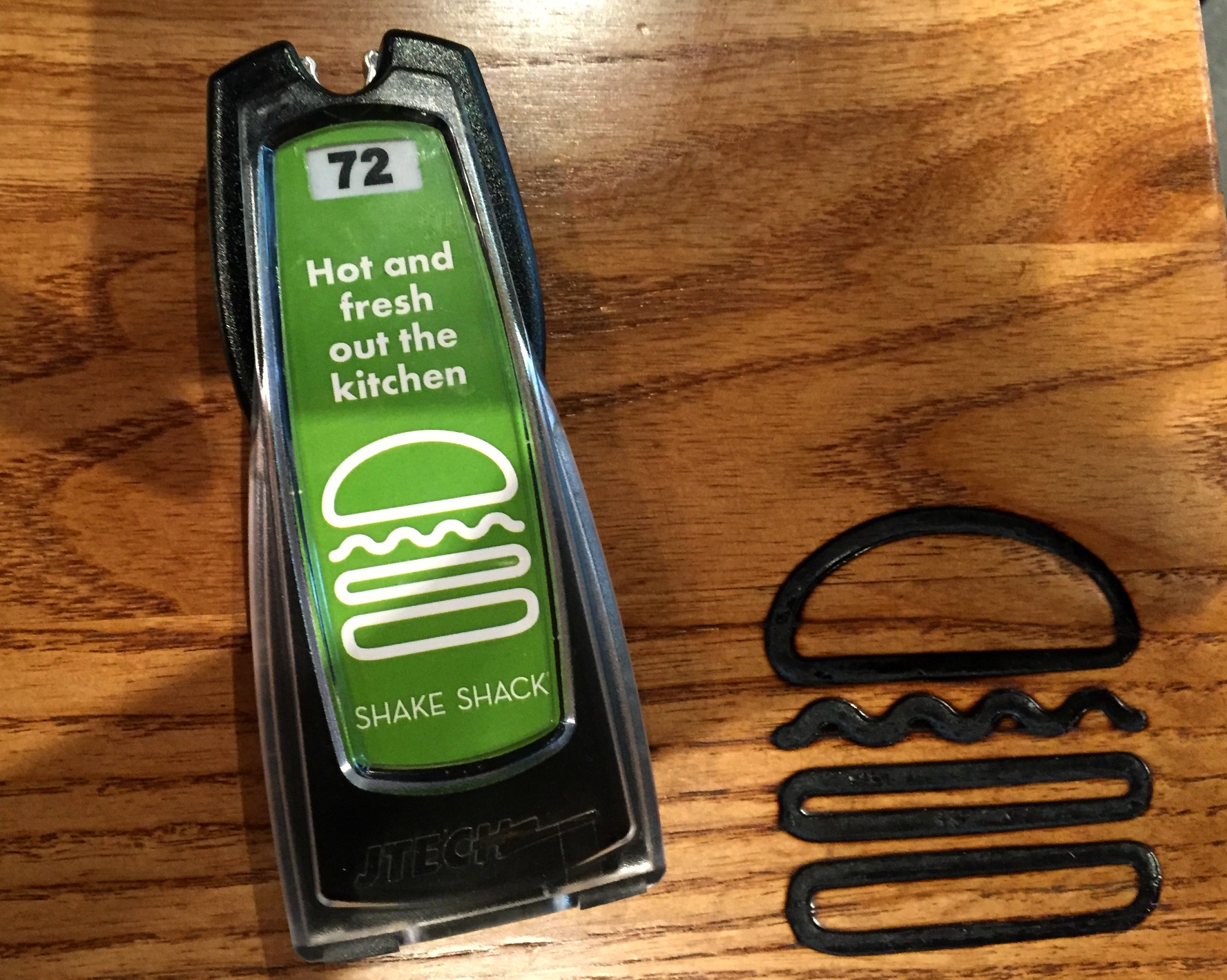 My three children opted for hot dogs – they couldn’t be tempted by any of the flashier variations on the menu (Shake-cago Dog with all kinds of salad accompaniment, Cumberland-Style sausage or the ShakeMeister Sausage, topped with cheese sauce and ale-marinated shallots), instead opting for the authentic German all-beef hot dog, £4.50 each.

Cardiff Daddy loves burgers so it took him a while to decide, eventually opting for the SmokeShack, £7.50 or £10.75 for a double, served with bacon, chopped cherry pepper and ShackSauce. 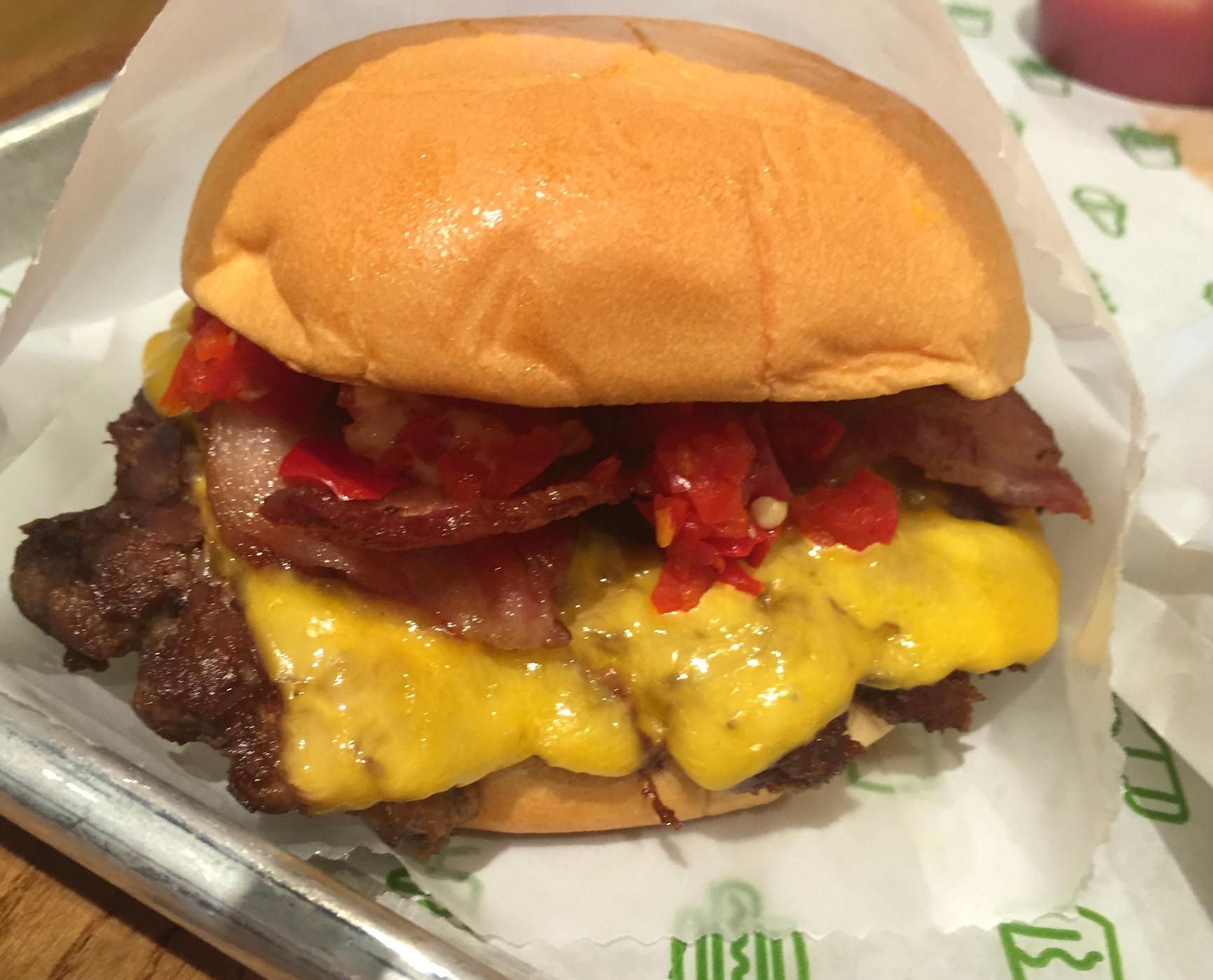 He was disappointed that we were a couple of days too early for him to try out the new limited-edition Yard Burger, which launches on Wednesday 1st June and will be available until 17th July. Made from 100% Aberdeen Angus beef, it’s topped with Neal’s Yard Colston Basset Stilton and house-made picked red onions. 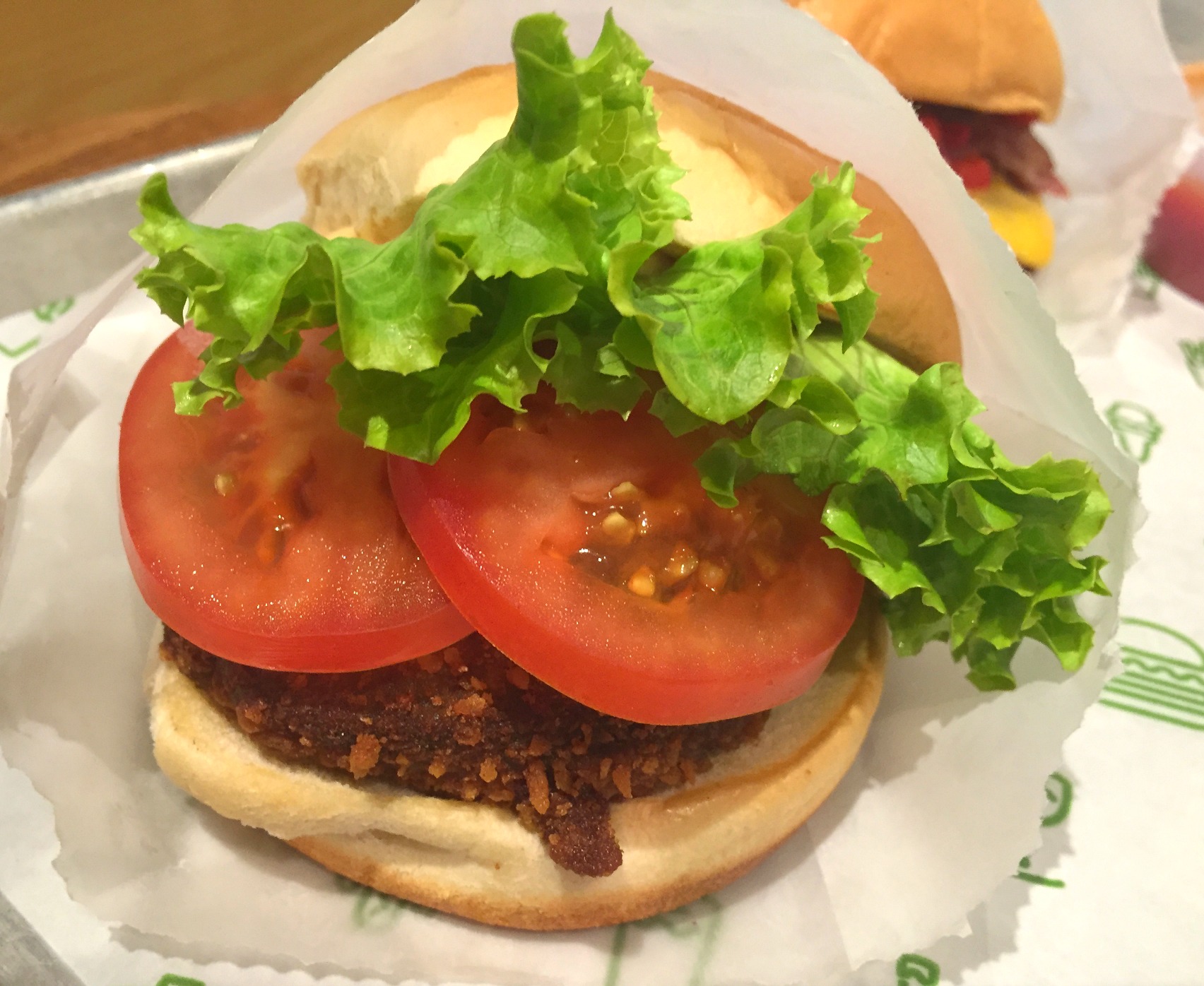 Being a vegetarian, I opted for the ‘Shroom burger, £5.50. Made of crisp pan-fried Portobello mushroom, filled with melted cheese, and topped with lettuce, tomato and ShackSauce, this was delicious. It could have been a little bigger, but it’s so nice to have a vegetarian burger which has had a bit of thought put into it, rather than an obviously-frozen pre-packaged vegetable burger so many other places seem to serve. There’s also a vegetarian hot dog.

We ordered two portions of fries topped with melted cheese sauce, £4 each, and one without cheese, £3, to share between the five us. They were generous sized portions and my kids loved the crinkle cut. 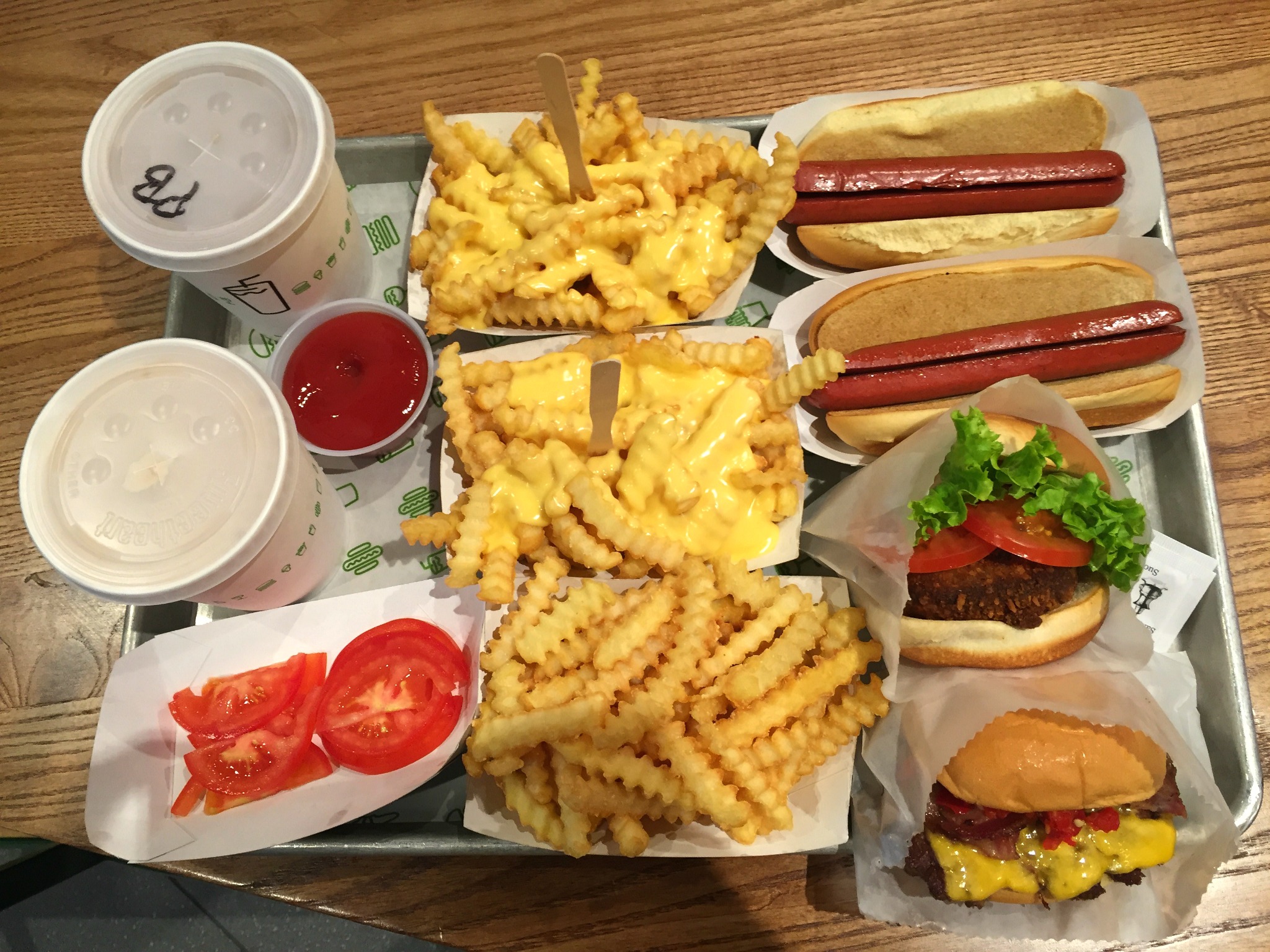 However, I must be honest here. They enjoyed their hot dogs but were far more concerned with the desserts and shakes. On Jodie’s recommendation, they shared a chocolate shake and a chocolate and peanut butter shake, £5.25 each. Oh my word, these were a massive hit. They loved them! Especially Toddler Boy I, who from the moment he had his first sip, refused to eat any more of his hot dog.

In the name of providing an honest review, we tried all three concretes on the menu (£5 single, £7.50 double, as well as a make-your-own option). 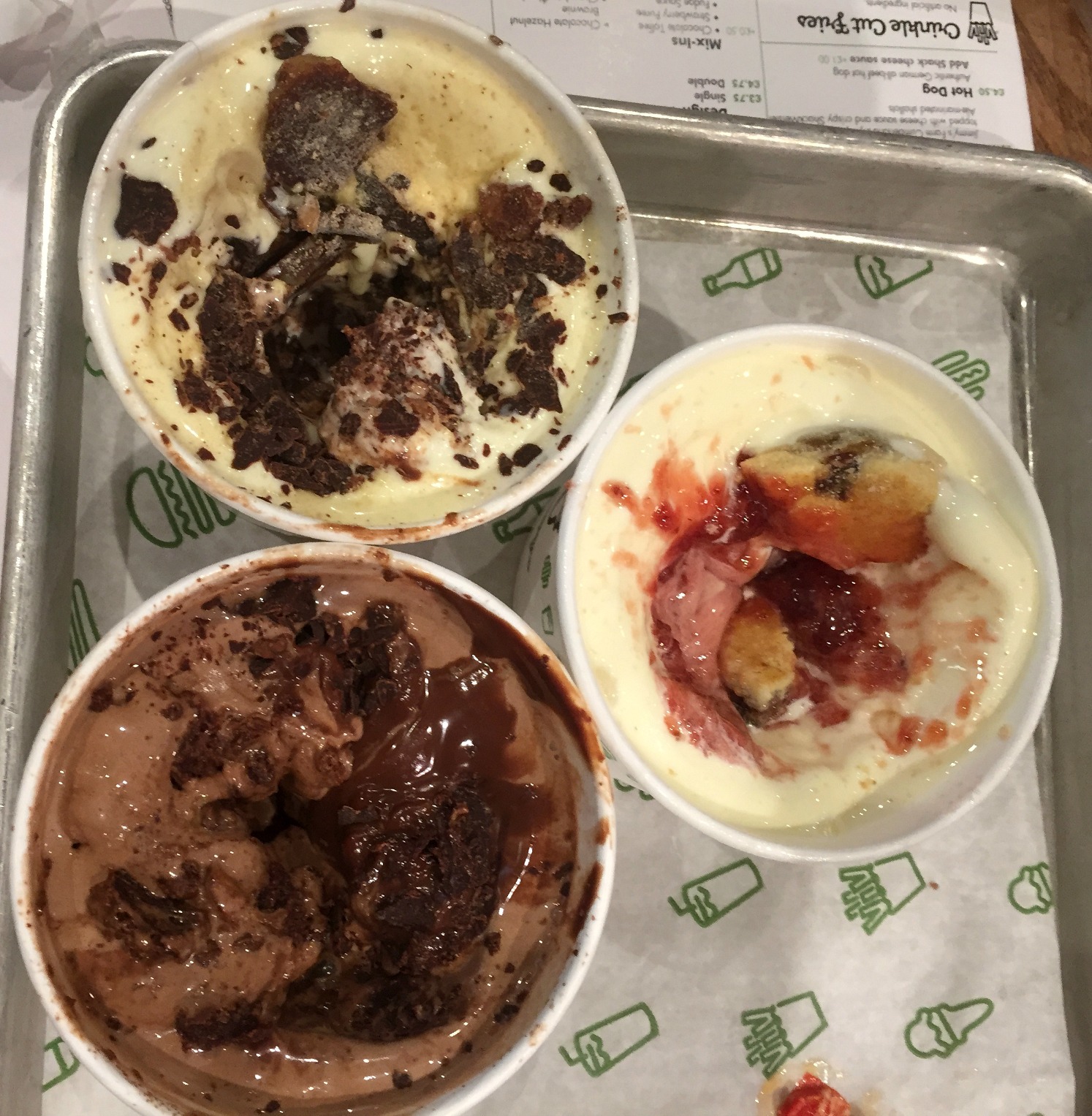 Price-wise, Shake Shack is a more expensive option than a fast-food burger restaurant, but the food quality and atmosphere is great. It’s a good choice if you’re in town and don’t want the formality of a restaurant or, in our case, it’s perfect for a family treat. And I think treat is an important word here – because as much as we enjoyed our meals, I hate to think how much sugar my three consumed with their shakes and concretes! A definite success.

Have you been to Shake Shack in Cardiff or elsewhere? Do let me know what you think in the comments section below, by tweeting me on @cardiffmummy or on the Cardiff Mummy Says Facebook page.

*Disclaimer – we were given complimentary meals for the purpose of review 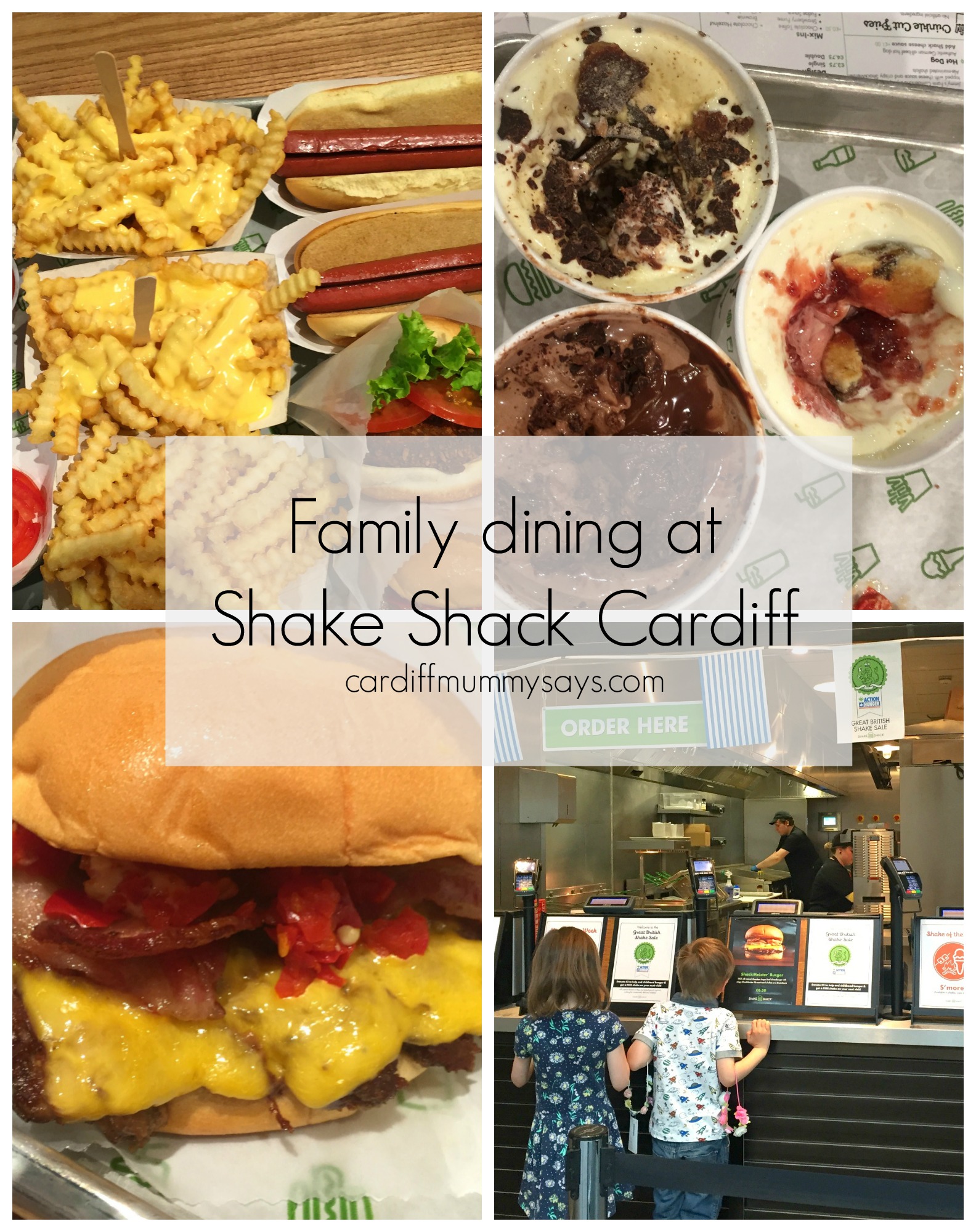