Tŷ Hafan gave us free entry into the Bubble Rush
in return for coverage on Cardiff Mummy Says
but all fundraising efforts for the charity are our own
as we aim to raise £1,000 this year

We did it! Today we completed the 5K Bubble Rush in aid of Tŷ Hafan. It was such a fun event with a great atmosphere and we are proud to be running for such an incredible cause. Held at Bute Park, this is the first Bubble Rush ever to be held in Wales. The family-friendly fun run saw participants running (or walking!) a 5K course (just over three miles) with huge cannons blasting out foam at various points along the way.

There was a great atmosphere before the race with Matt and Polly from Capital FM hosting dancing games for the runners, while Cardiff-based Turnd Up Fitness warmed us up with some dance routines.

We met Santa who is a huge supporter of Tŷ Hafan – and who completed the course along with the rest of us. 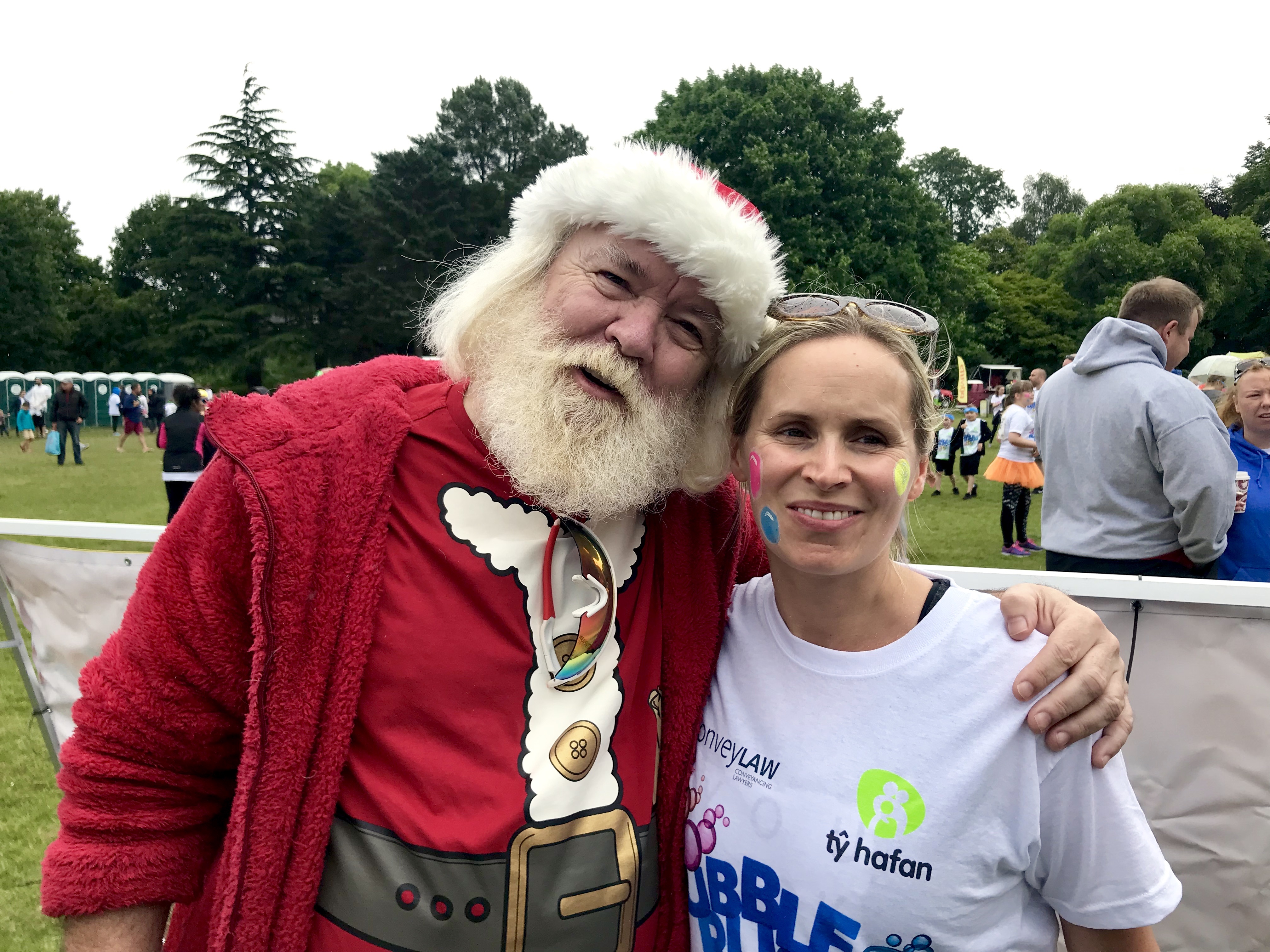 My children were amazing with all three of them completing the entire course – no mean feat for children aged eight, six and four. There were so many children at the event in fact who should be proud of their amazing efforts today.

My eight year old loved it so much that she announced at the end that she wanted to do it all again. 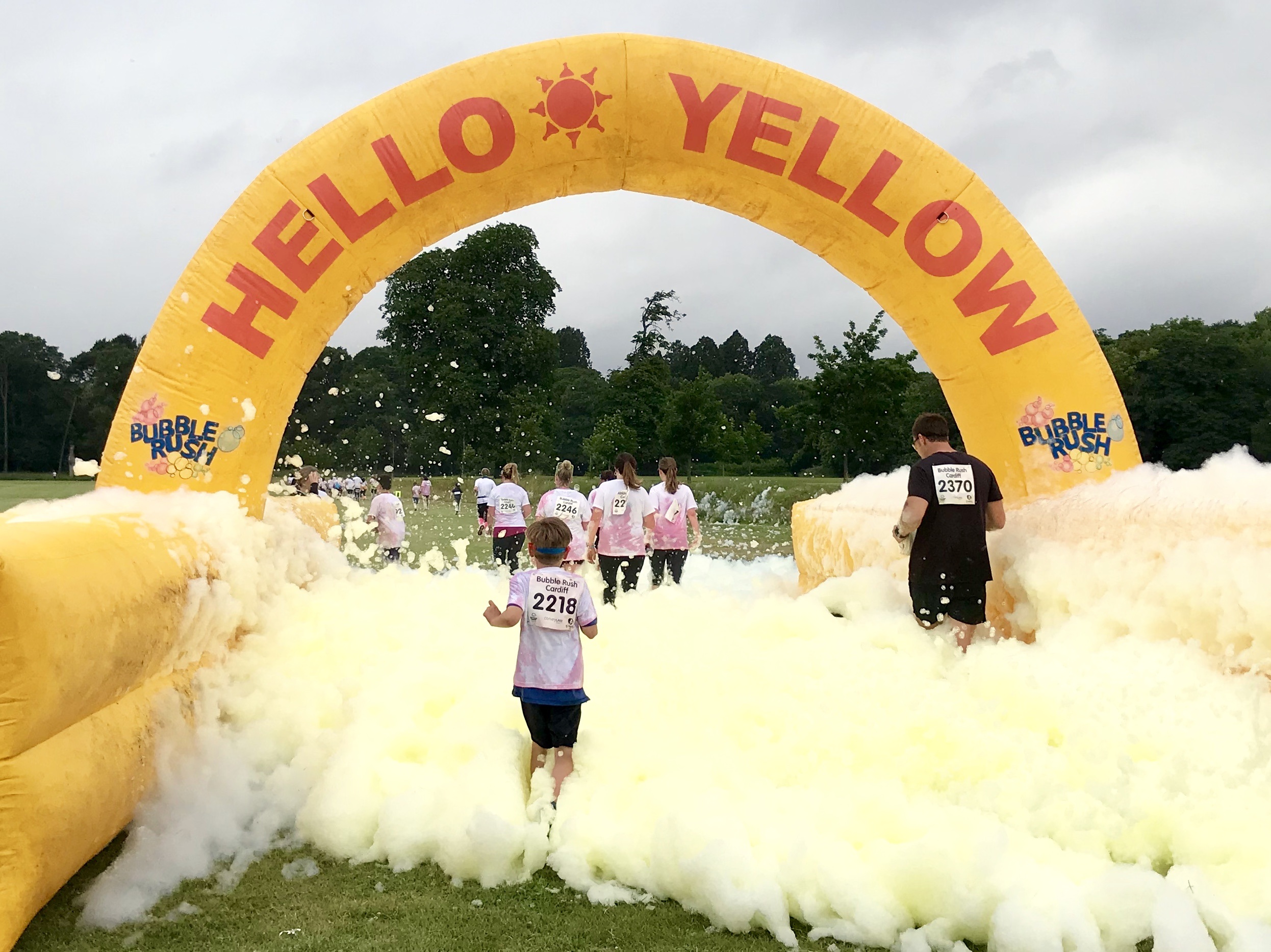 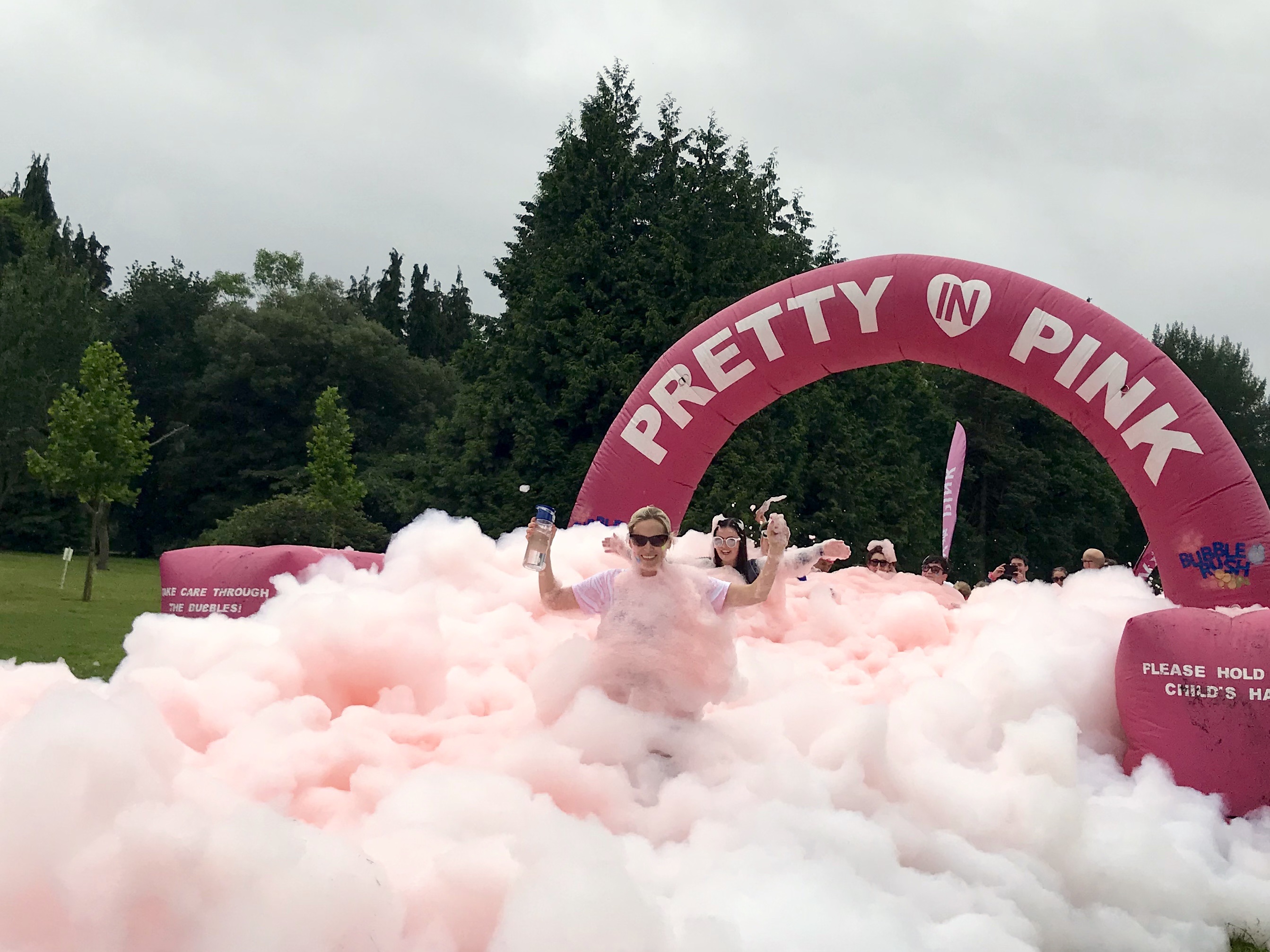 My six year old zoomed off so fast we completely lost him not far from the start. I was navigating my four year old through the first lot of bubbles and the next thing we knew the six year old was gone. I left Cardiff Daddy with the other two and ran after him – I’m quite a fast runner but he was so far gone I couldn’t even see him, never mind catch up with him. I approached one of the very helpful race marshals who radioed ahead and asked all the different bubble stations to keep an eye out for him. When we eventually caught up with him he said he was having so much fun that it hadn’t occurred to him to look back to see if we were behind him. He and I completed the course running most of the way but we wanted to end the race as a family so we went back to find the other three who were doing amazingly and weren’t too far behind and we all crossed the finish line together. 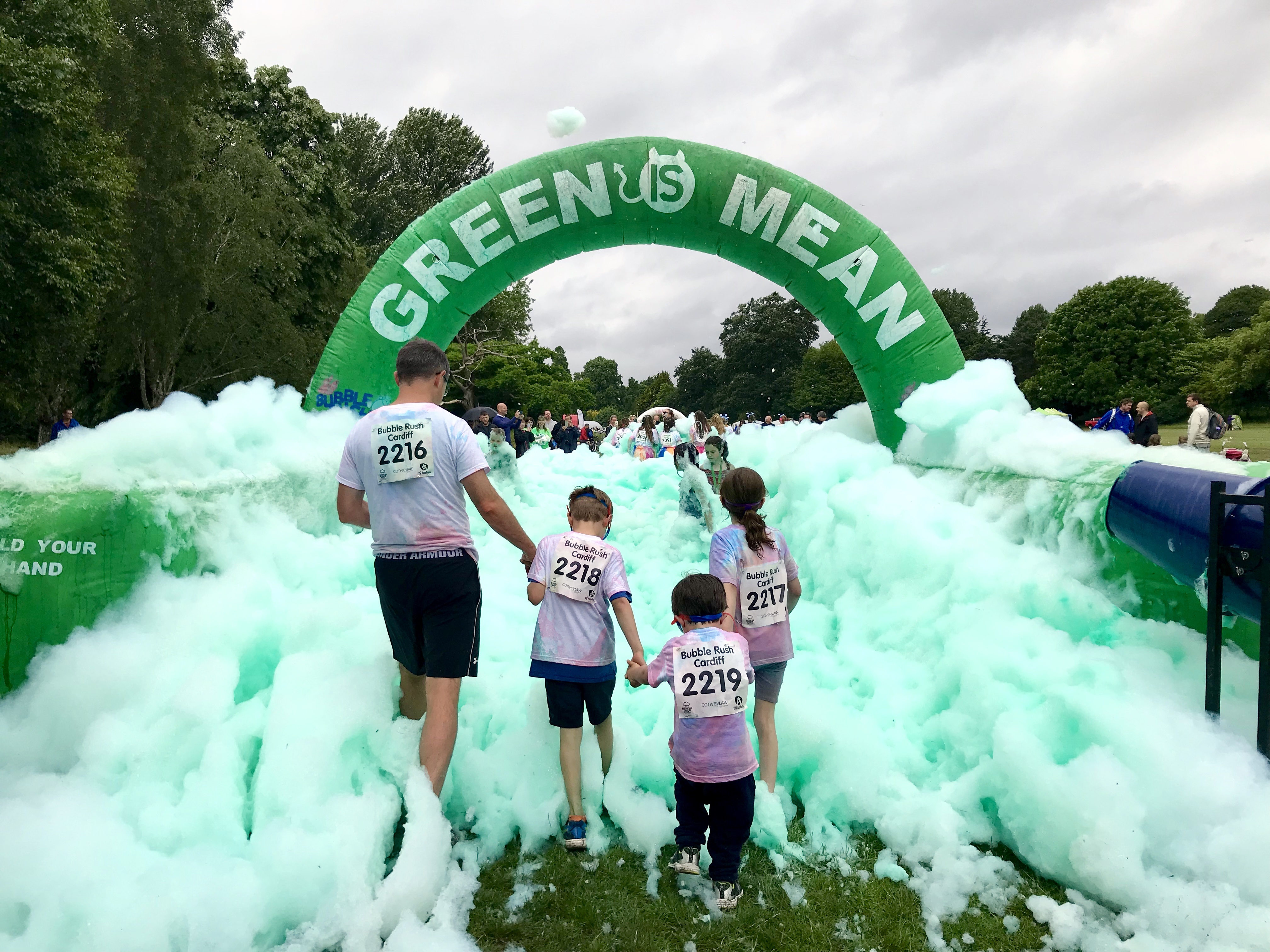 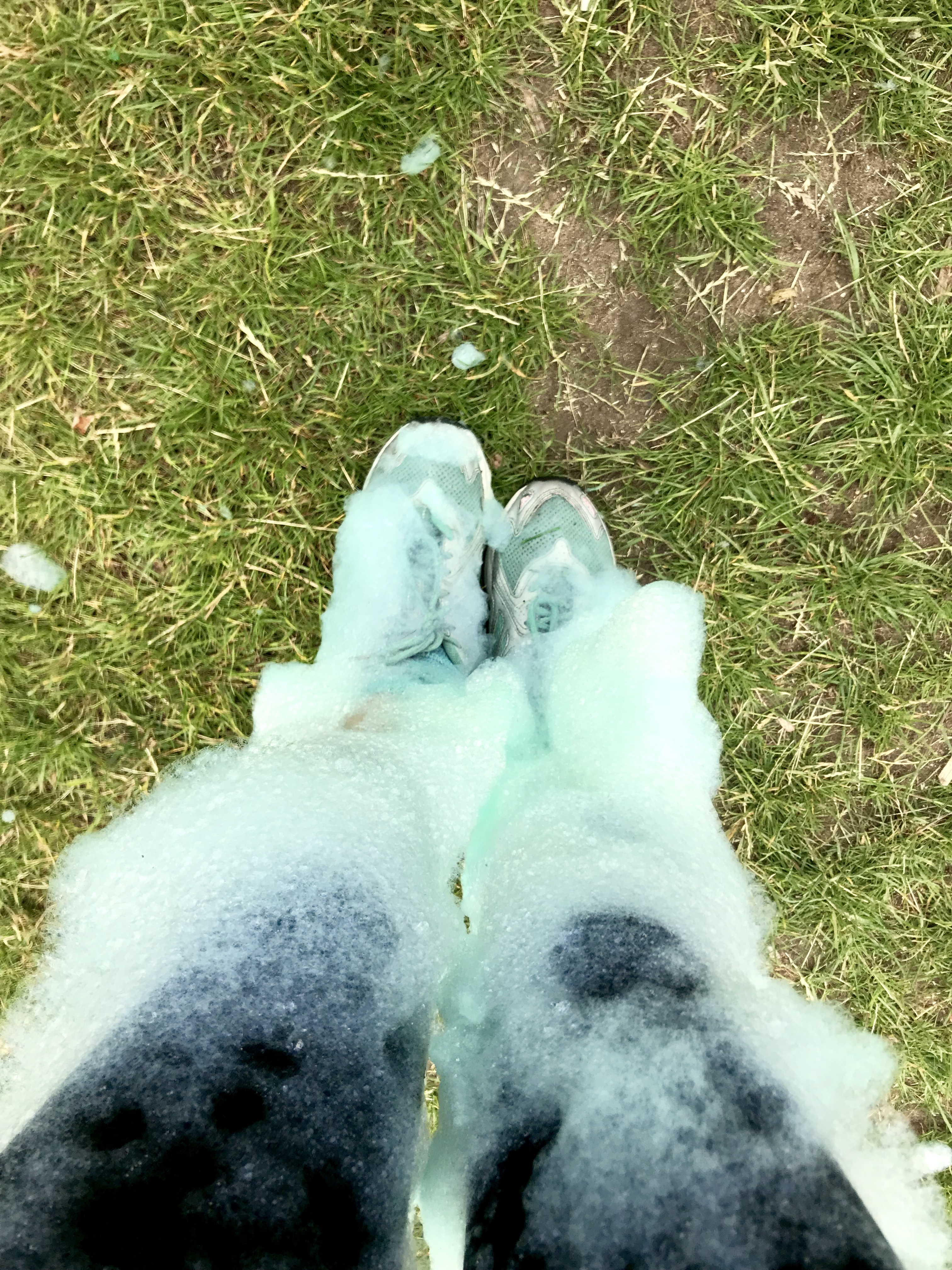 The white t-shirts we started the race in were anything but white by the time we’d been through the yellow, pink, blue and green bubbles. At the pink station the bubbles were so high my children could barely see. Thankfully we were all wearing swimming goggles or sunglasses to protect our eyes but the rest of our clothes and body were multi-coloured by the time we finished. 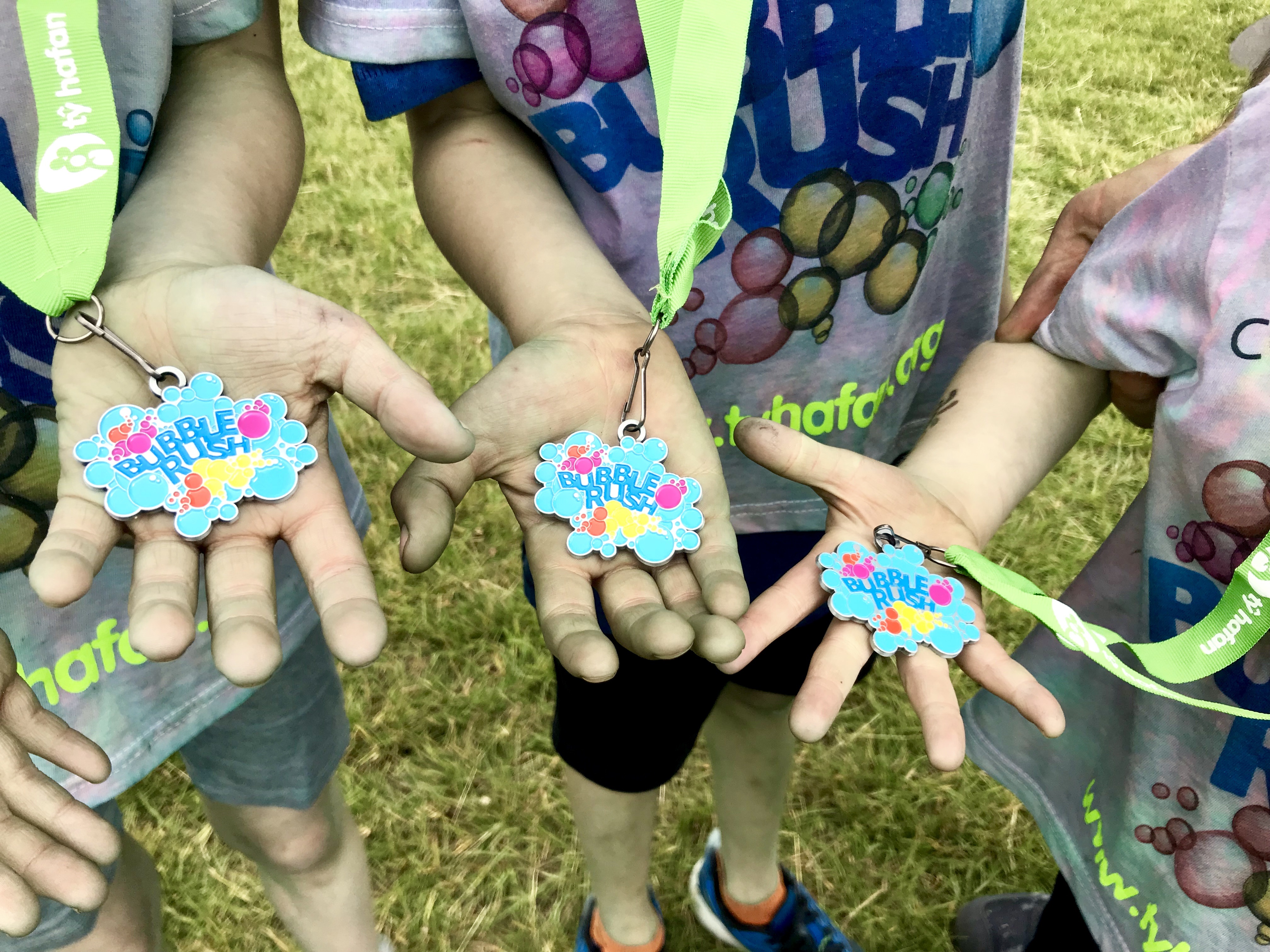 Despite hot showers all round, all of us have been left with a slight green tinge to our legs and hands. The kids think it is hilarious but it’s a bit of a problem for me because tonight I am going ‘out out’ to mark the start of my 40th birthday celebrations. I’ve used make up wipes, baby wipes, make up remover and scrubbed for ages in the shower… and it won’t go. So green legs it is then!

That’s got to be worth a pound or two in sponsorship, surely?! 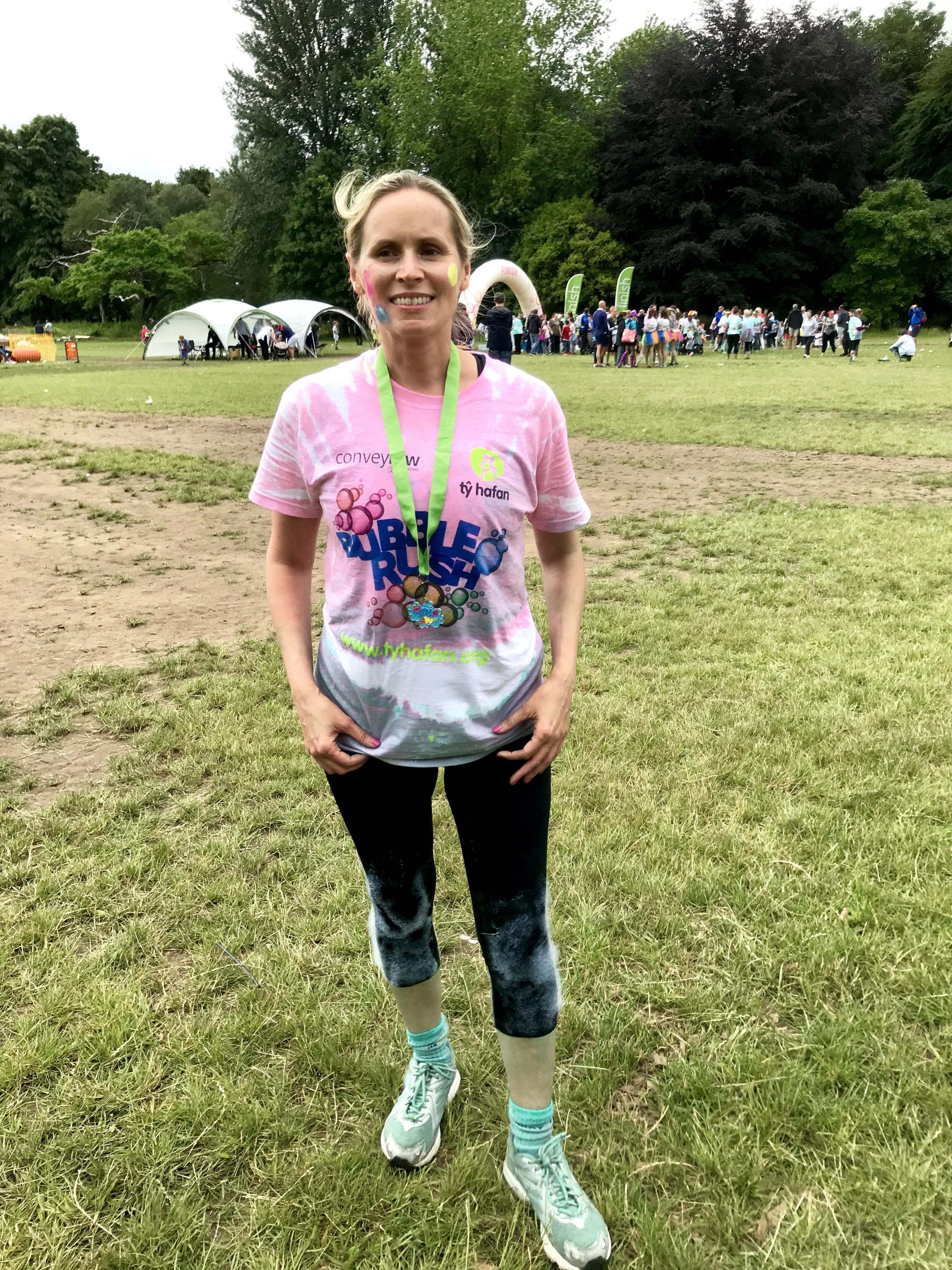 Next up with our fundraising efforts for Tŷ Hafan

On Sunday 5 August I will be running the Barry Island 10K (6.2 miles). I grew up in Barry so I am super excited to be running for Tŷ Hafan on the roads of my hometown. All five of us will then take on the family 2K (1 mile) straight after. If you fancy joining in the run then there are still charity places available for Tŷ Hafan for the 10K at a discounted rate of £4.99 as well as places for the family 2K. Click here for more information.

Sunday 7 October will then see me running the Cardiff University/Cardiff Half Marathon – my very first half marathon. I’m finally taking part after years of saying that one day I would. At the moment I’m a mix of excitement and apprehension – but I know any aching calves or blisters on my feet caused by running 13.1 miles/21K are nothing compared to what the children and families helped by Tŷ Hafan are going through.

We’d love your support in aid of Tŷ Hafan

We have already raised more than £400 and are so grateful for everyone’s kind donations. We still have a way to go before October and our £1,000 target though so if you can spare a pound or two we would really appreciate it.

Tŷ Hafan is an incredible charity based in Sully, not far from where we live in Cardiff. It is one of the UK’s leading paediatric palliative care charities and offers care to children and support for their families, throughout Wales.

If you think this means they simply provide a place where children can come to die, you couldn’t be further from the truth.

Tŷ Hafan offers comfort, care and support to life-limited children (children not expected to live beyond the age of 18), young people and their families in the hospice, in the community and in their home so they can make the most of the time they have
left together.

They allow parents and carers to relax and recharge their batteries. And they make sure the needs of brothers and sisters are never forgotten.

Tŷ Hafan needs to raise £4 million every year so that it can provide its services to families in Wales for free. You can read more about Tŷ Hafan herenofollow.

You can visit our Just Giving page here. Thank you for your support.