I’ve seen a fair few shows from Orbit Theatre over the years and considering they are an amateur dramatics company, the quality of their performances and ambition of their productions has always impressed me.

Singin’ In The Rain – which opened at Cardiff’s New Theatre last night – is the company’s 106th show since they debuted in 1969 with Oliver. It’s a feel-good musical with lively choreography, beautiful singing and some great special effects from a passionate cast and crew who fit their love of the stage in around their day jobs.

Based on the much-loved Gene Kelly musical film from 1952, Singin’ In The Rain is set in Hollywood in the late 1920s as the film world moves from silent movies to ‘talkies’.

Don Lockwood and Lina Lamont are the golden couple of the silent movie era with dozens of successful films behind them. However when a talkie from a rival company becomes a smash, their studio boss decides they must compete. There’s just one problem – Lina’s nauseatingly squeaky voice and inability to act. Not to mention the fact she believes her on-screen romance with Don is real. Will a plan to dub the vocals of aspiring actress Kathy Selden – who Don has fallen in love with – over Lina’s help the movie become a success? And will Lina share the limelight? 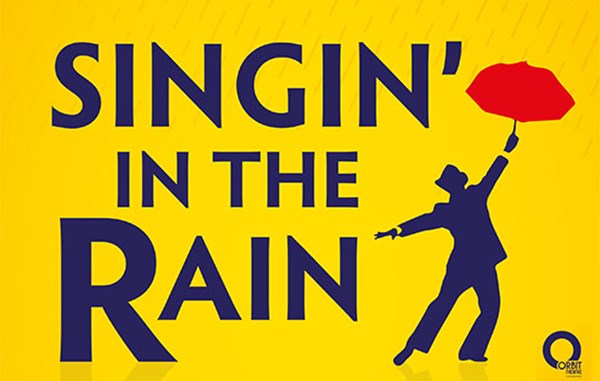 Joe Green as Don and Dan-Ivor Jones as his best friend Cosmo have some great musical and dancing numbers together as their friendship unfolds while Nia Collier-Coleman plays Lina Lamont and maintains that squeaky voice throughout. Patsy Nearkhou-Davies as Kathy gave my favourite performance of the night with smooth vocals and a lovely stage presence.

Special mention must also go to Lewis Griffiths and Ben Osborne who play the young Cosmo and Don at the start of the show and put on a great tap dancing number.

The show is slickly choreographed by local freelance dance teacher Nicola Boyd-Anderson with plenty of tap dancing from the whole cast and stage-filling chorus numbers. The finale rendition of Singin’ In The Rain with the entire company wearing rain coats was a highlight for me.

The costumes beautifully conjure up the glamour of the era and some of the special effects during Don’s rendition of Singin’ In The Rain had the audience gasping out loud. Unfortunately his routine was marred by slight sound problems but his performance never faltered.

I watched the show with my eldest two children aged 8 and 7. They knew some of the musical numbers and I’d discussed the basic plot in advance with them but this was their first introduction to Singin’ In The Rain. They both learned a lot about the early days of the film industry and although there were a few questions at the end they followed the story with no problem and enjoyed the show as much as I did.

Singin’ In The Rain is at the New Theatre Cardiff until Saturday 1 December with evening performances at 7.30pm and matinees on Thursday and Saturday at 2.30pm. Book online here.