If you’ve ever walked through St David’s shopping centre in Cardiff, chances are you will have seen this brilliant wall art. It’s by the wonderfully creative cult brand I Loves The Diff, which has a whole host of products celebrating Wales and the Welsh sense of humour.

And now, the people behind the Taffywood series of cards, prints and mugs which give a Welsh twist to classic books and films, are teaming up with St David’s shopping centre to raise money for three charities which support homeless and vulnerable people in Cardiff – Huggard, Llamau and the Wallich. 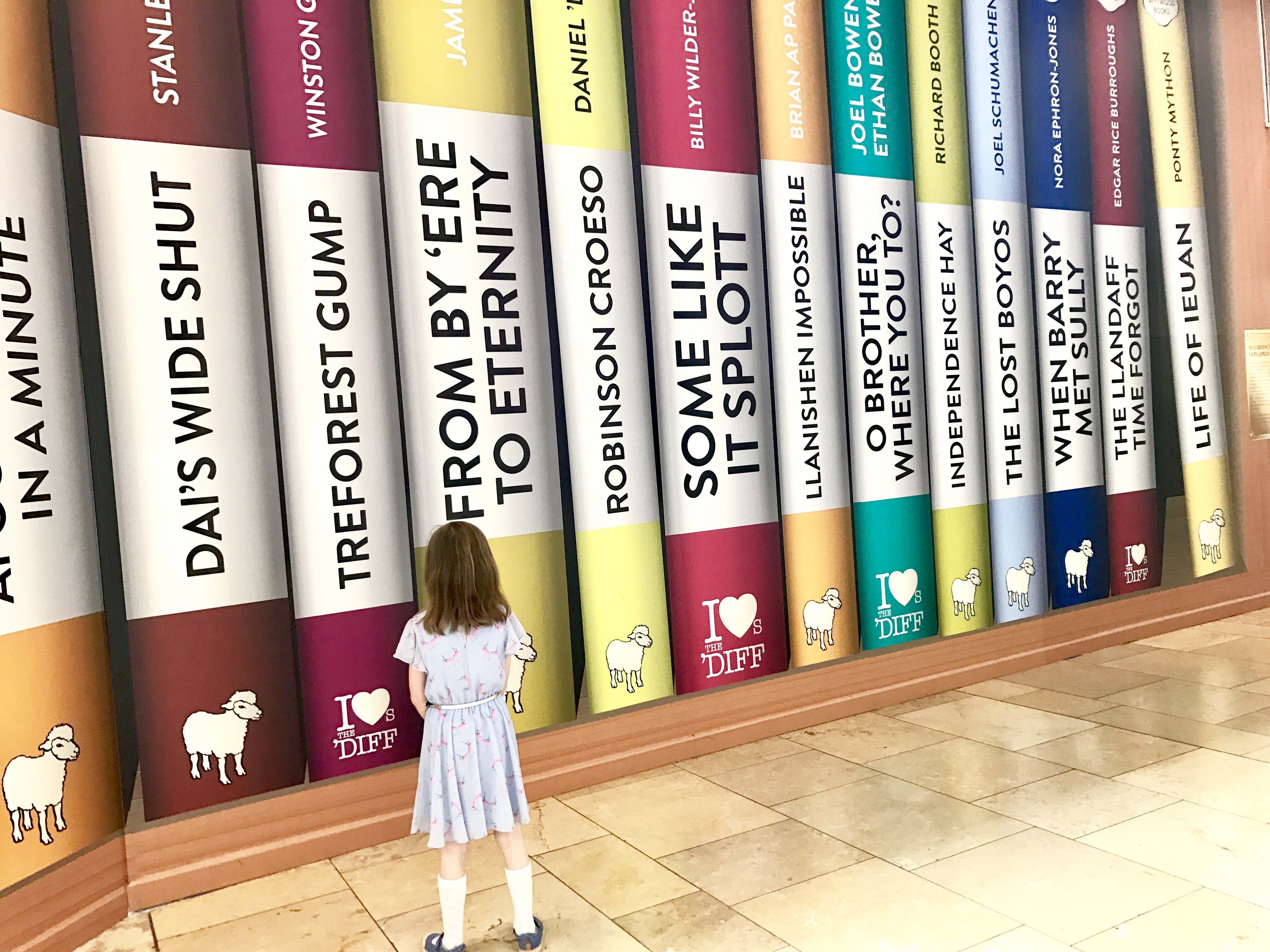 Every Saturday from 29th April until May 27th, you can get your hands on a different exclusive print for a minimum donation of £3. There are only 1,000 of each print available on a first-come, first served basis, between 11am and 6pm at either of the two stalls on the lower level of the centre (near Clogau or Watches of Switzerland).

I headed into town today, the second week of the campaign, with Little Miss E, my seven-year-old daughter, to find out more about the fundraising venture, and to make a donation in exchange for a print.

We got there at around 11.15am, not long after the stalls had opened. Both were already busy and the team were hoping to beat last week’s total donations of £3,000.

Miss E was quick to point out that a donation of £3 means each charity will get £1 – and to times that by 1,000 prints over five weeks “is a lot of money”.

This week, the limited edition print is an atmospheric black and white photo called Sglodion. Sglodion is the Welsh word for chips, and the street depicted in the picture is Caroline Street, better known as Chippy Lane or Chip Alley – the place where locals go after a night out in the city centre for a bag of chips. 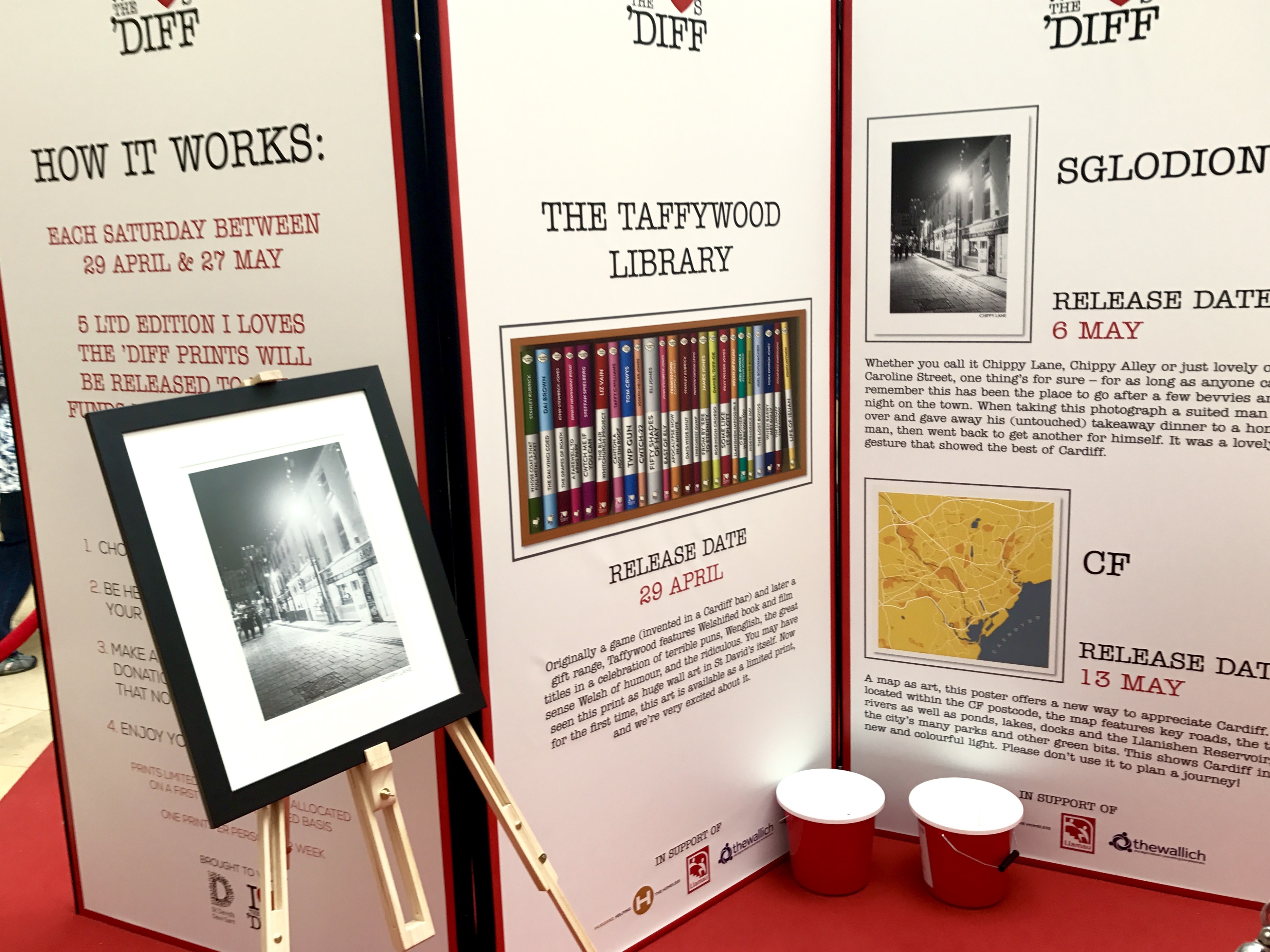 As the website for the campaign says, “When taking this photograph a suited man walked over and gave away his (untouched) takeaway dinner to a homeless man, then went back to get another for himself. It was a lovely gesture that showed the best of Cardiff.”

My children know all about Chippy Lane (well, as much as it is appropriate to tell young children!) because they’ve walked through it on occasions, so they loved this print. 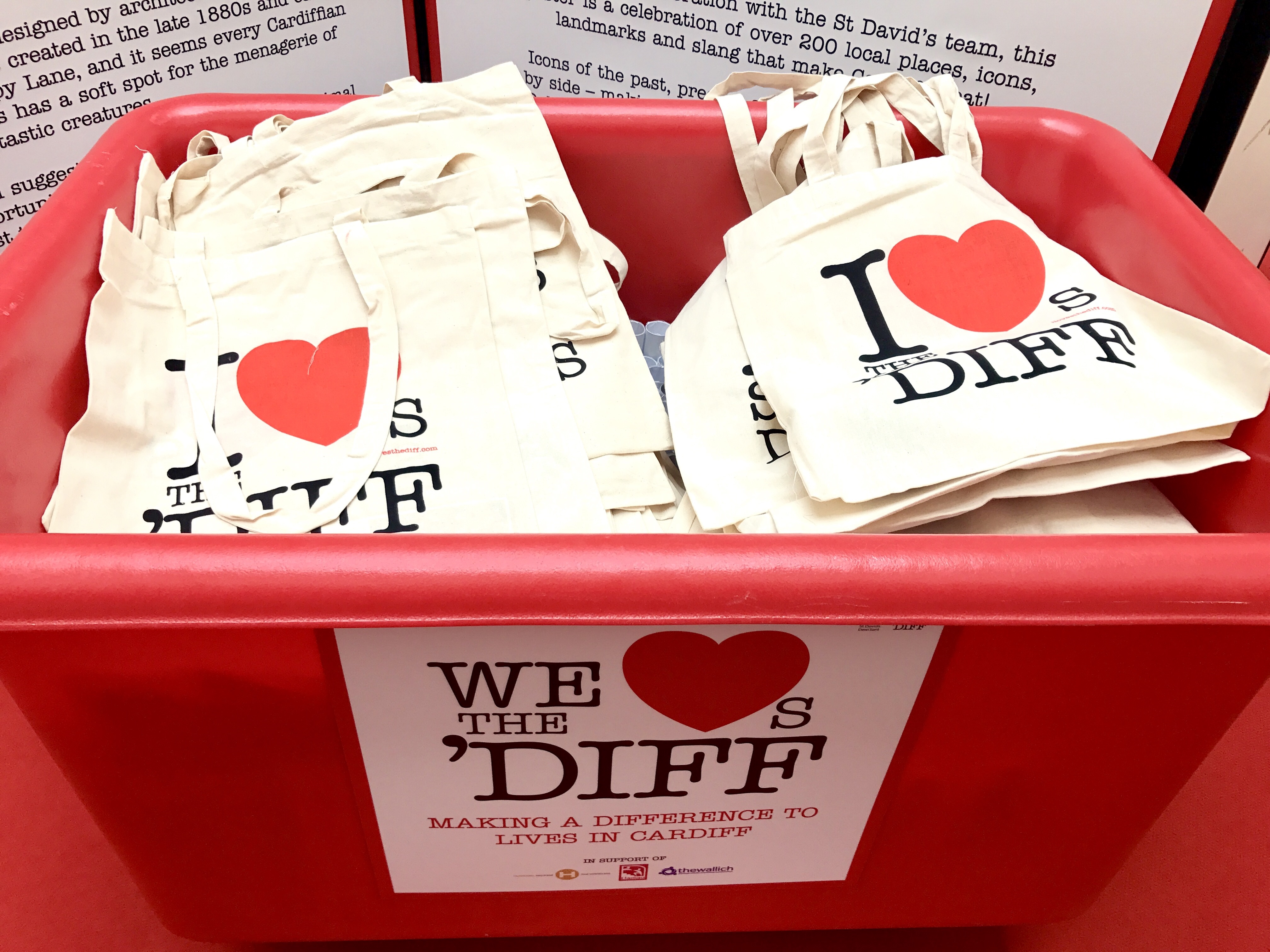 We were disappointed to have missed last week’s exclusive print featuring the library of Taffywood titles – there were huge queues when the stalls opened and this has already become a much sought-after item. 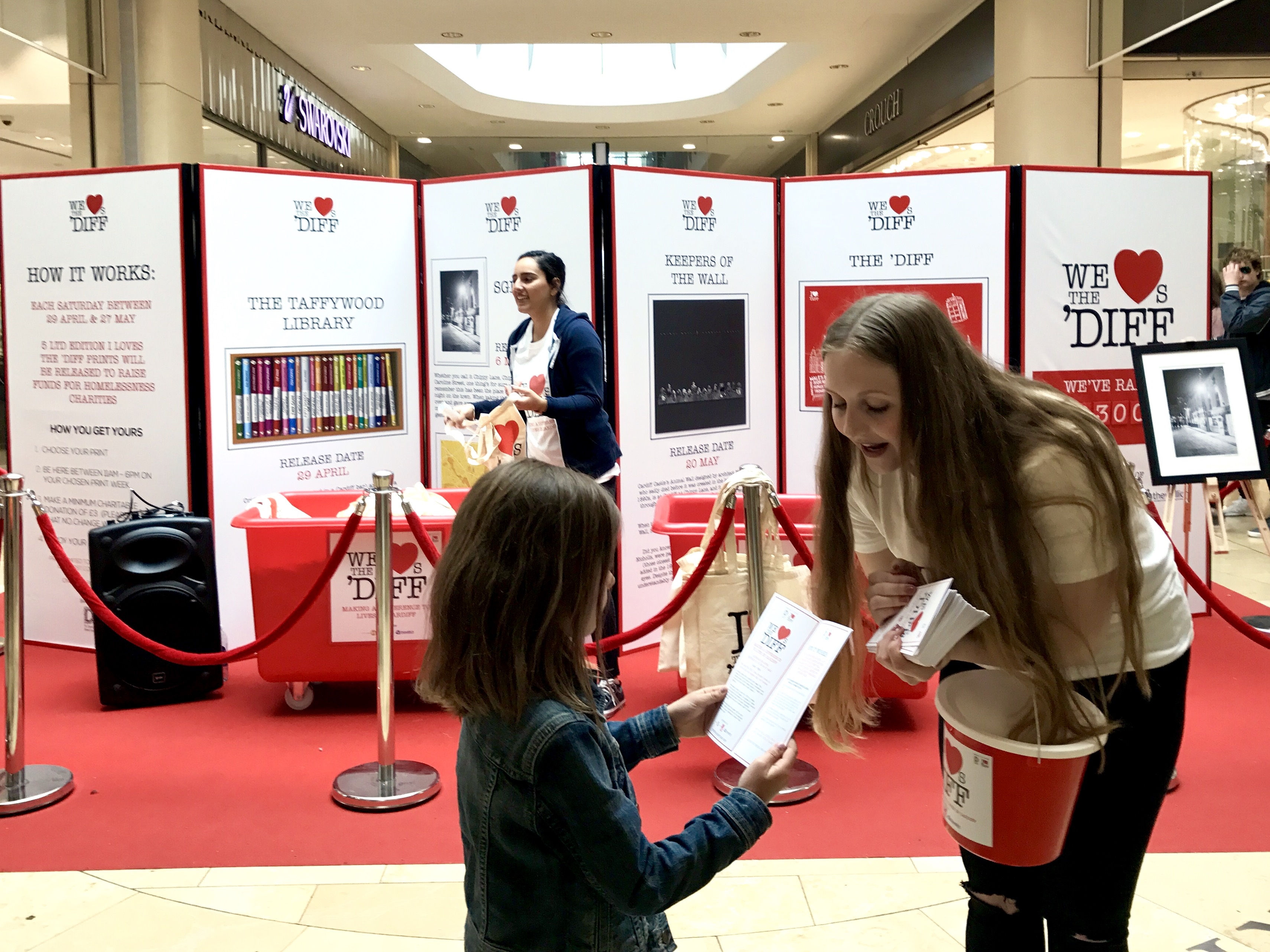 However, I think they are keen to come back for Keepers of the Wall on Saturday 20th May, as they love the animal sculptures on the walls of Cardiff Castle; and The ‘Diff, a bold red and white design which celebrates over 200 local places, icons, landmarks and slang that make Cardiff great. 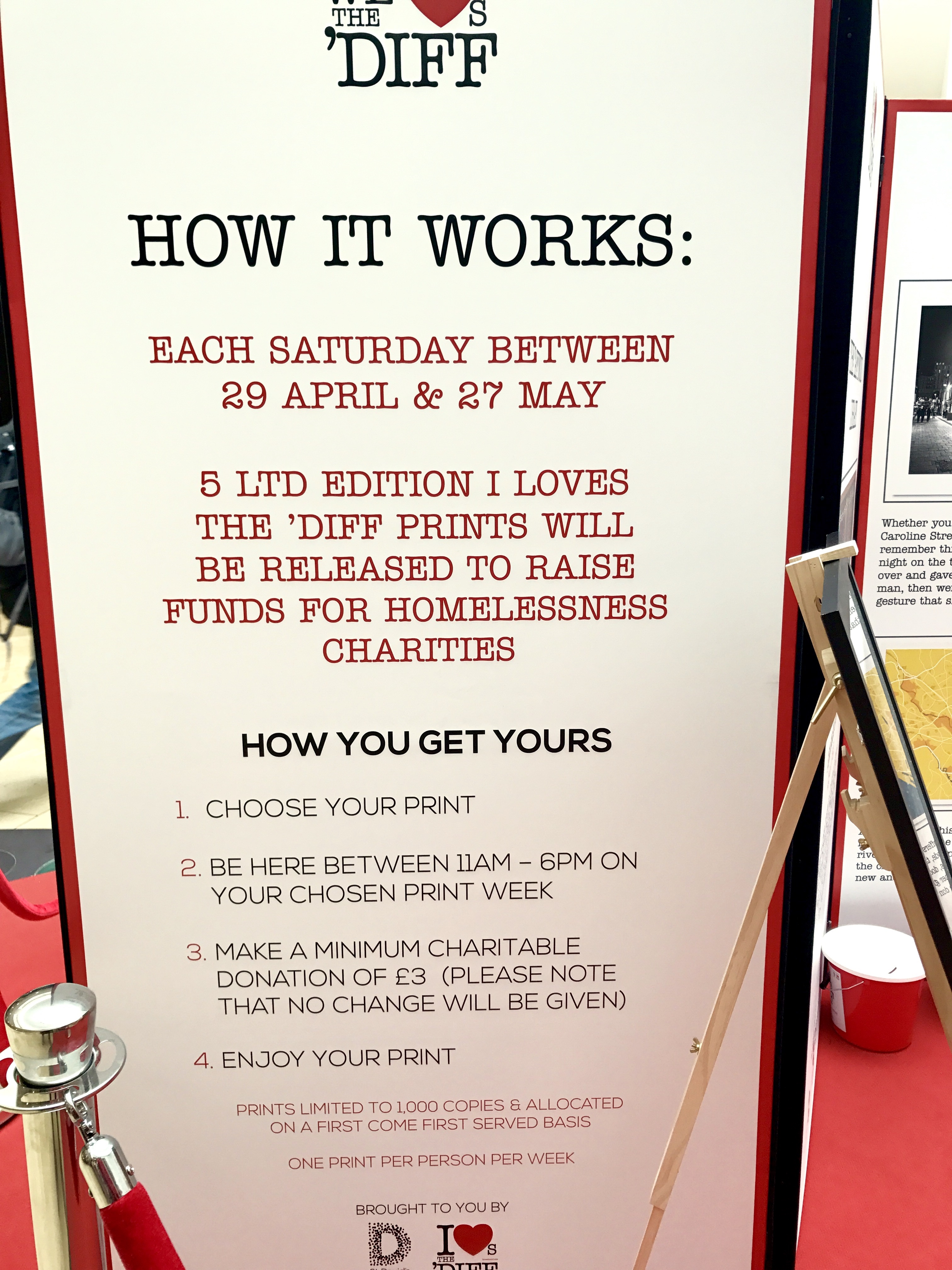 You can read more about the campaign, and how to get hold of the prints, here.

Have you managed to pick one up? Or are you planning on heading into town to get one? Do let me know in the comments below, on the Cardiff Mummy Says Facebook page, or by tweeting me on @cardiffmummy