These are the first two things people have been asking me when I tell them we spent the night at National Museum Cardiff on Saturday night.

My children and I were there for Museum Sleepover – Dippy Dino Nights, which started when the general public went home from the day on the Saturday and finished just before the doors re-opened for visitors on the Sunday.

The sleepovers are regular events at the museum, but we had an extra special guest in the shape of Dippy, the famous diplodocus skeleton cast, usually found in London’s Natural History Museum, but in Cardiff as part of his UK tour.

The answer to both questions is the same: “A little bit.” 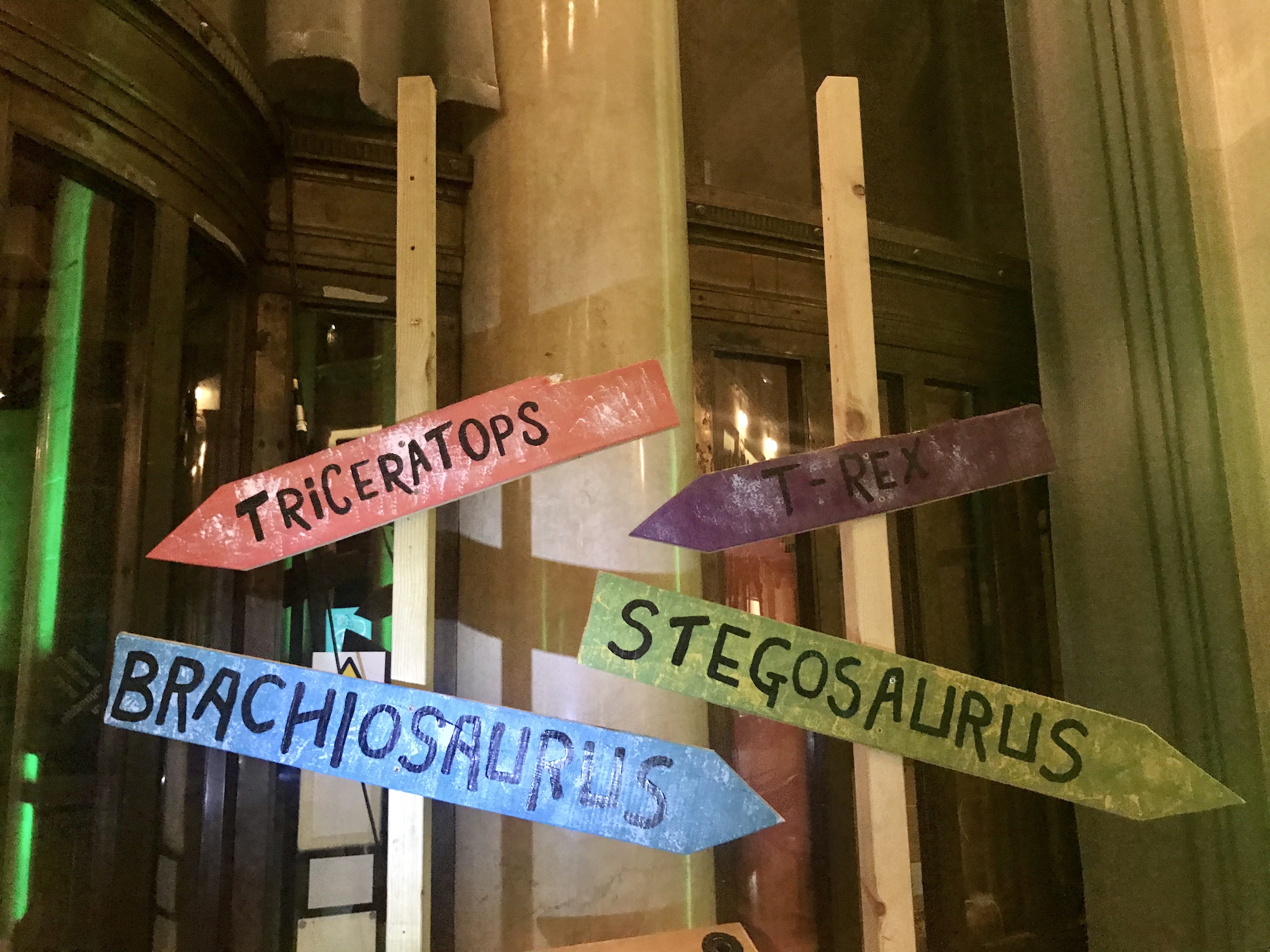 On the subject of whether it was spooky, it was only when the lights went off at midnight and strange shadows were cast around the high-ceilinged entrance hall that my children got a little bit scared about being in the museum after dark. They weren’t scared enough for it to impact our enjoyment of the night; but just enough to add a slight thrill to an already exciting experience and to want to cuddle up as close as they could to me as we bedded down in our sleeping bags for the night.

We’d just watched the 2006 film, Night at the Museum, in which all of the exhibits come alive at night and it wasn’t long before my children started asking if the same might happen in Cardiff… 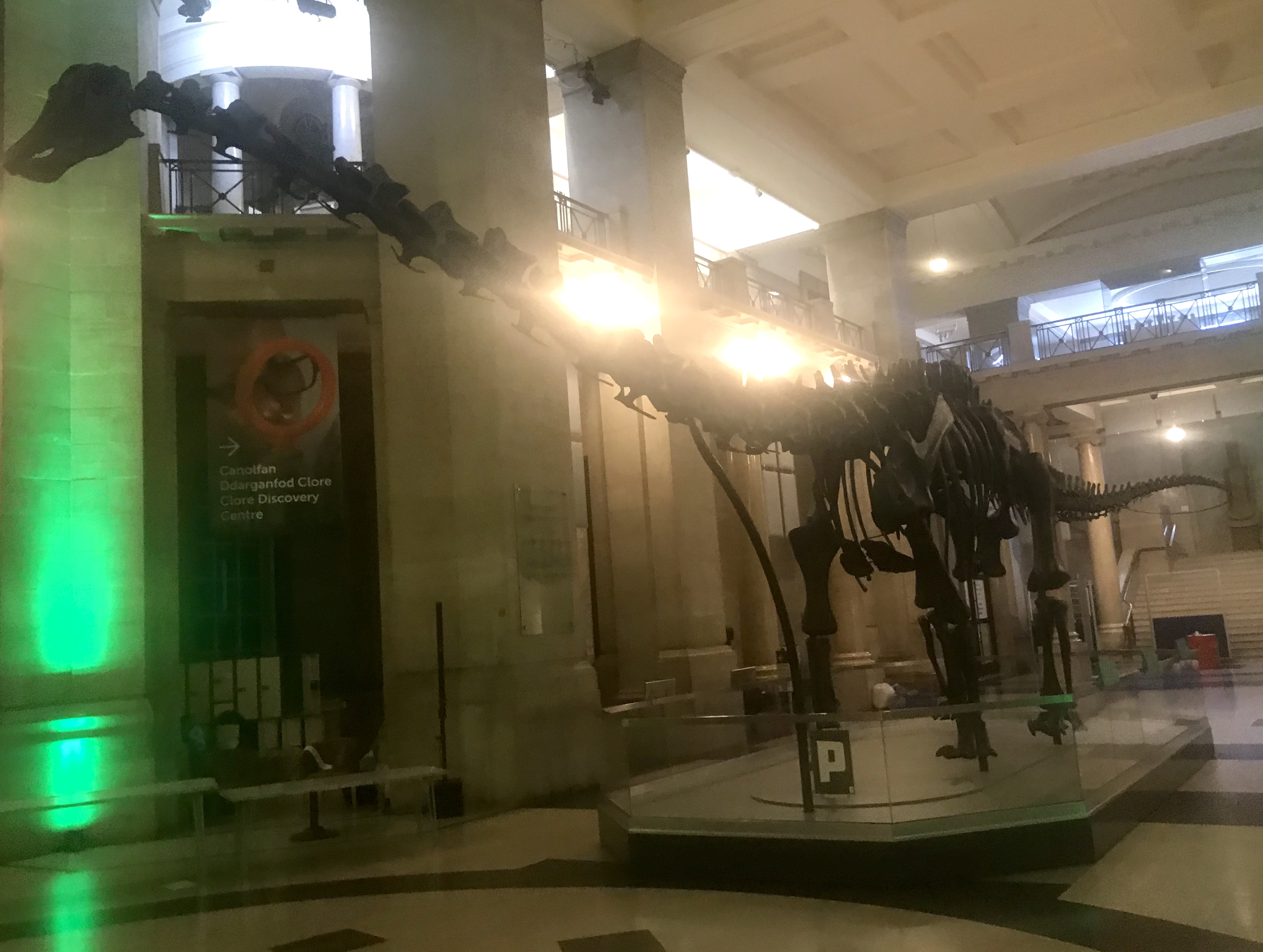 Did you get any sleep?

And on the subject of sleep, I’m not sure anyone can come to an event like this, where you’re sharing the space with more than a hundred other people, and expect a blissful full night’s slumber. We’d gone along expecting not to get much sleep and knowing we could go home and sleep in the morning, which was a good mindset to have. In fairness, everyone respected the curfew and the hall was silent, but sadly a few loud snorers kept many of us awake, with the acoustics of the grand building amplifying the sound. We’d been given little ear plugs in the survival kit, although these weren’t especially effective and in hindsight I wish I’d brought along our ear defenders. Yes, the snoring was that bad!

We went home completely shattered – but it was worth it for such a unique and memorable experience. As I said to my husband, who wasn’t able to join us for the evening, our children won’t remember the lack of sleep, but they will remember torch-light tours around the museum, late night hot chocolates and looking up from their sleeping bags to see Dippy.

This is National Museum Cardiff like we’ve never experienced it before (and we’ve been there a lot).

The museum has hosted several of these sleepovers, but we had the bonus of ours being on the last weekend that Dippy was in Cardiff, and we got to sleep alongside him – all 292 bones of him, standing at 21.3 metres long, 4.3 metres wide and 4.25 metres high.

Our evening started at 5.30pm, with everyone arriving in the dark with sleeping bags, pillows and overnight bags. We checked in and were given ‘survival bags’, and tags for our luggage. This was all put to one side and we were told the sleeping area would be arranged while we were watching the film.

At 6.15pm we were split into four different groups – we were stegosaurus, with the others being triceratops, brachiosaurus and T-rex – and for the next three hours we rotated around various activities. 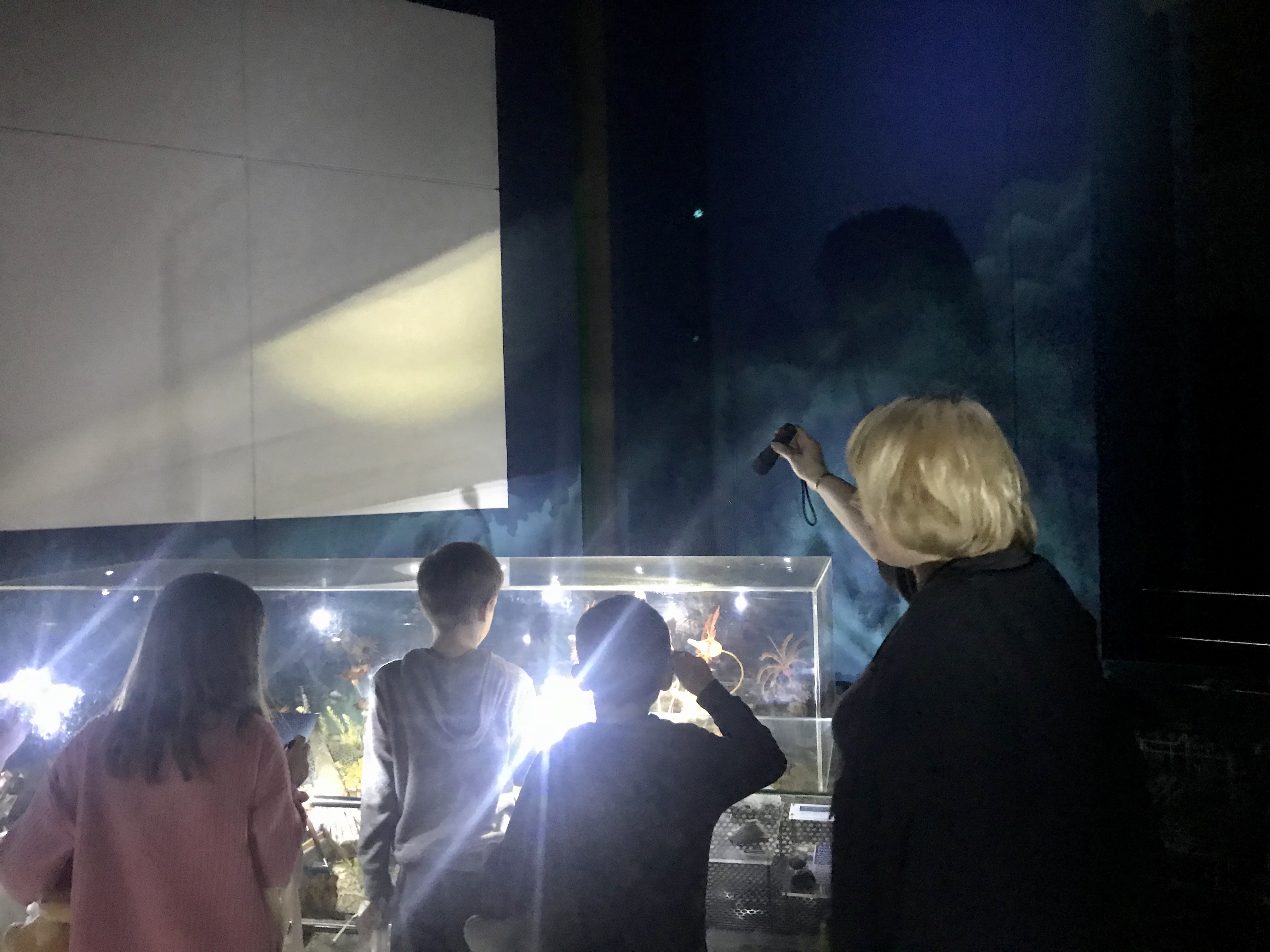 Our group started with a torch-lit tour of the museum’s Evolution of Wales gallery, with the torches included in our survival bags.

I couldn’t even tell you how many times we’ve visited this exhibition previously, but even for us as museum regulars it was a fascinating experience where we learnt such a lot.

Everything looks so different in the dark and we got such a different perspective compared to our usual visits. 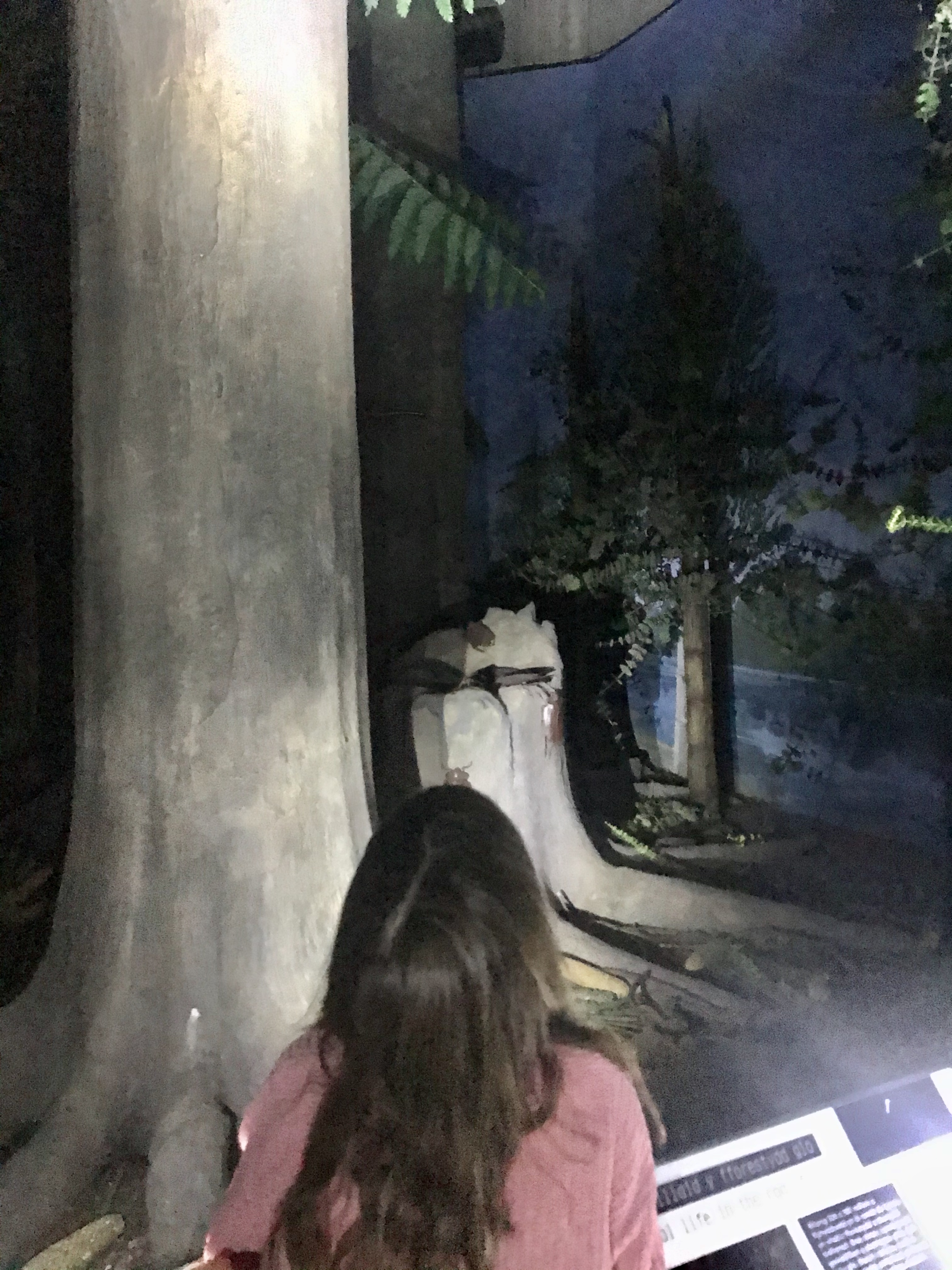 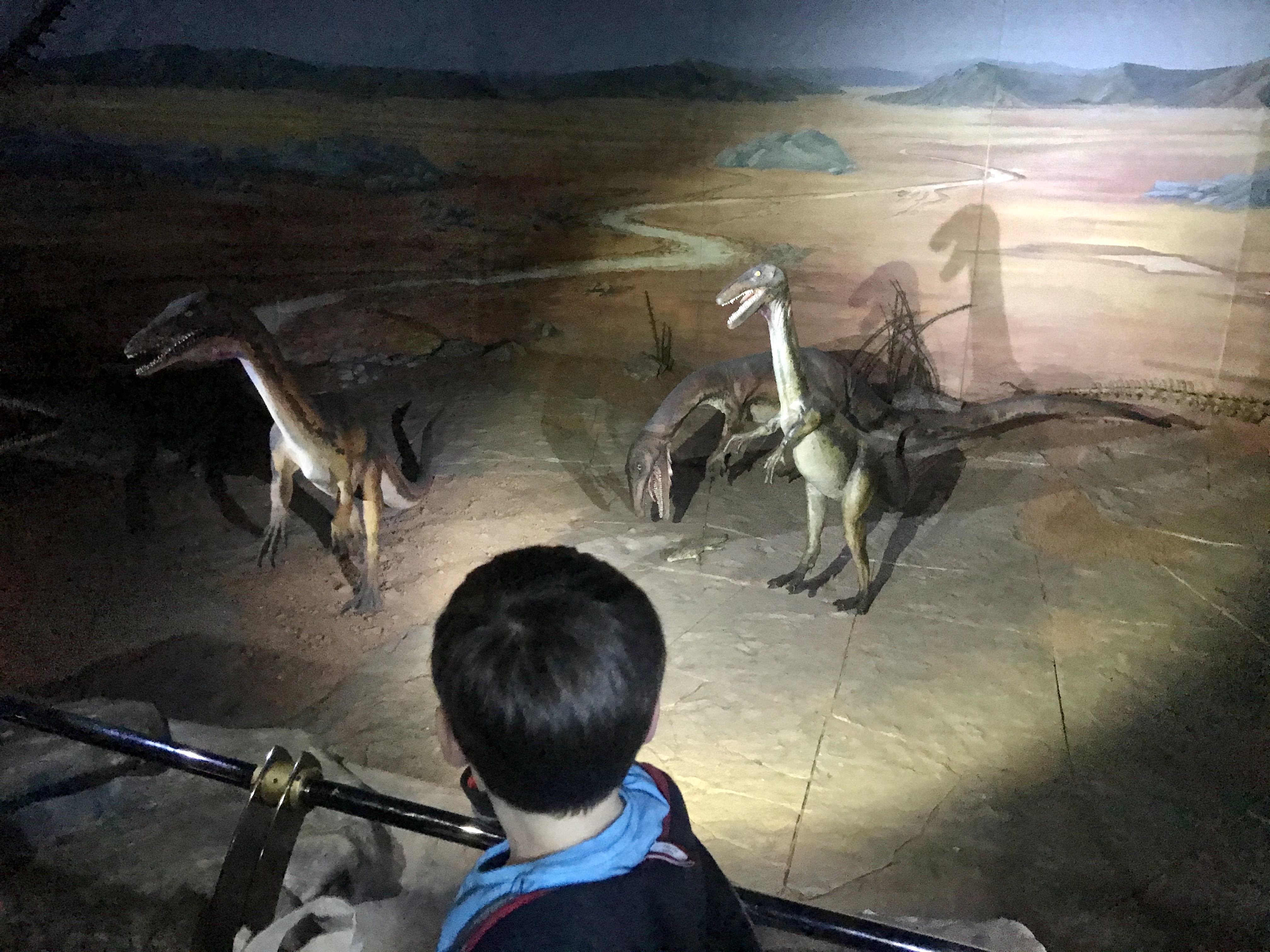 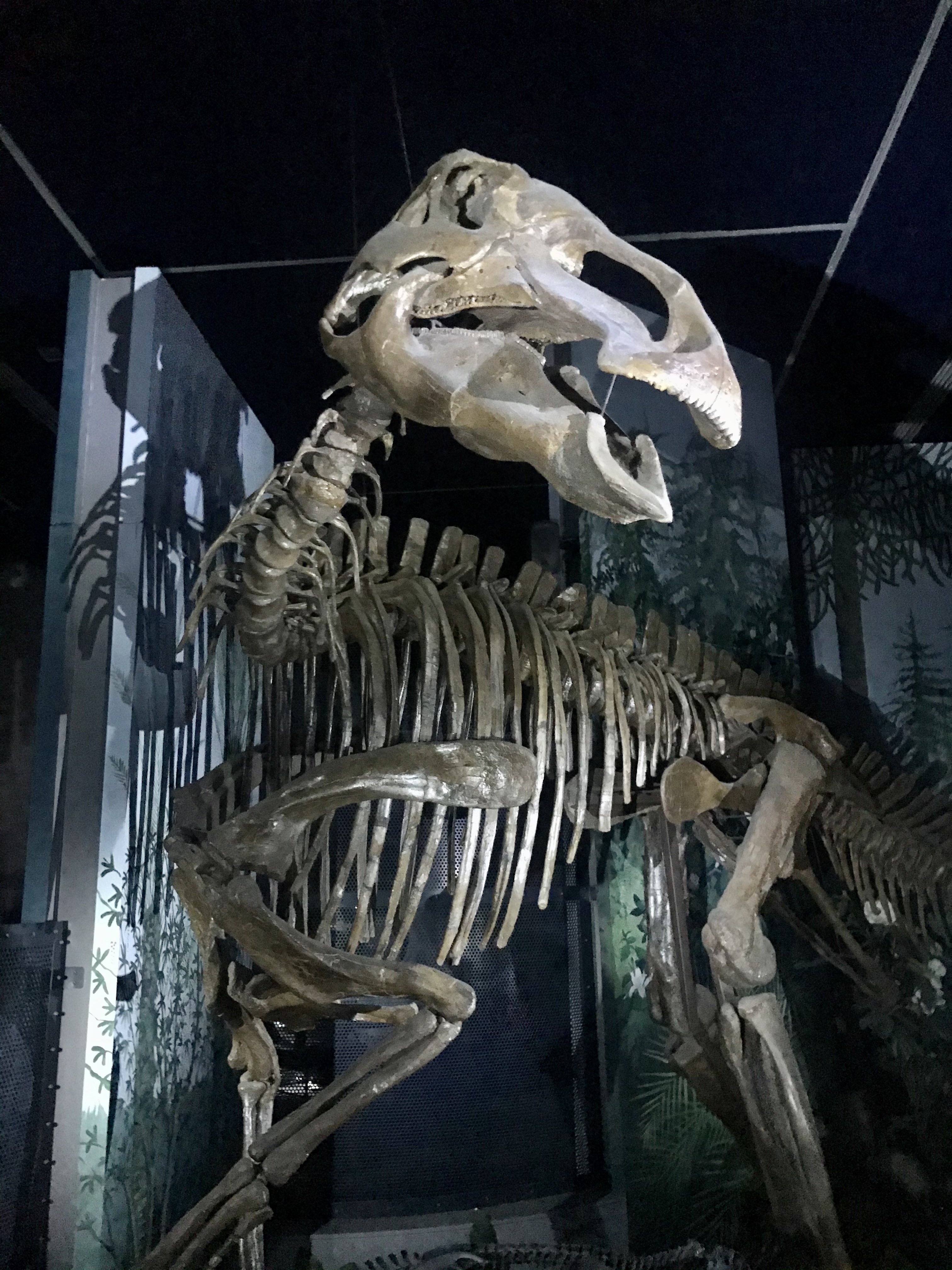 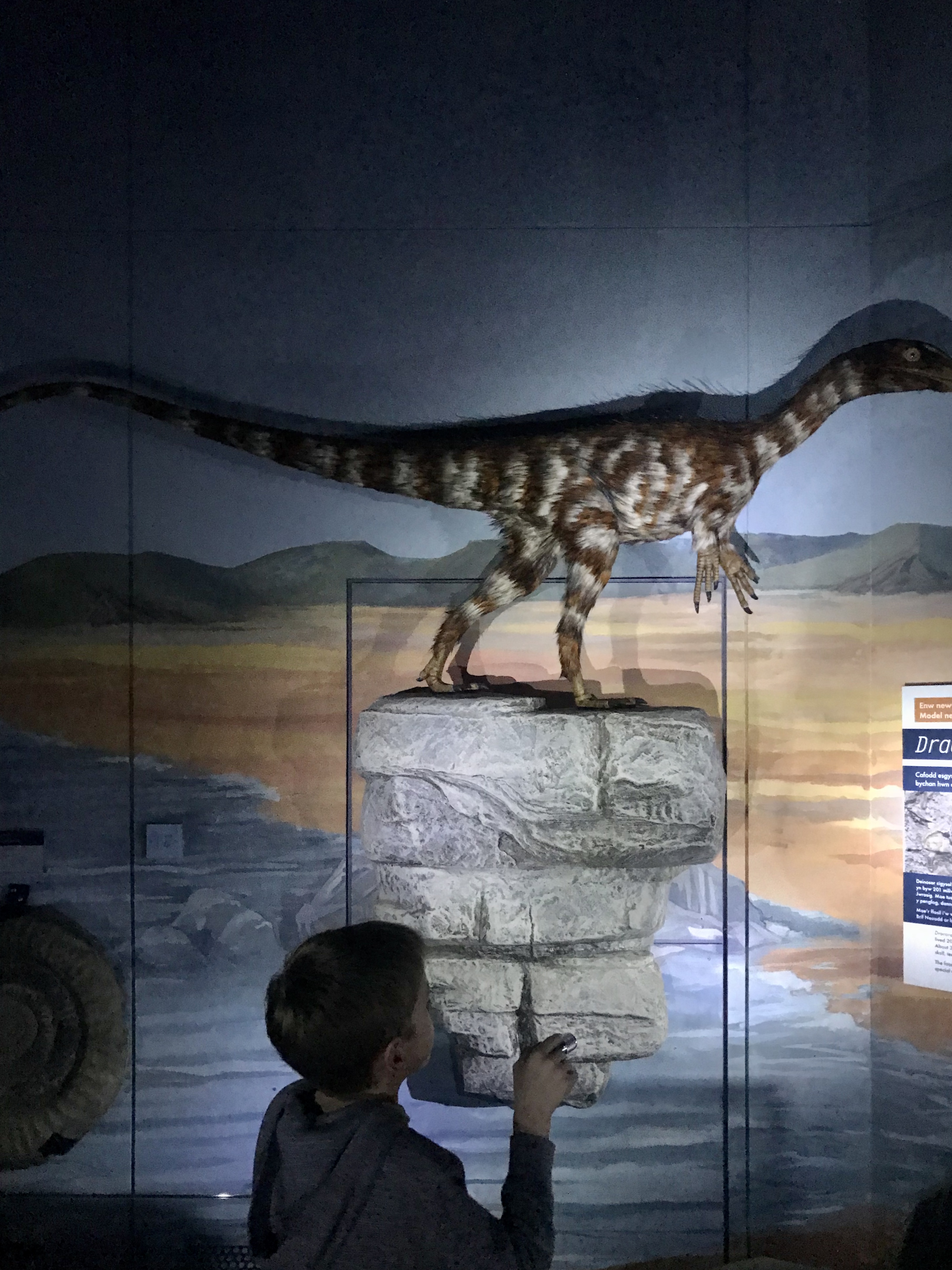 Our tour was led by Cindy, a geologist who works at the museum looking after the rock collections, and she was full of facts and wisdom not found on the information boards around the gallery.

The Evolution of Wales gallery, as its name suggests, is a journey through Wales’s past from its eformation, as we learned about early meteorites and different kinds of rocks, through the emergence of life including plant-forms and giant insects, on to the dinosaurs that roamed Wales, and the evolution of mammals and early humans. 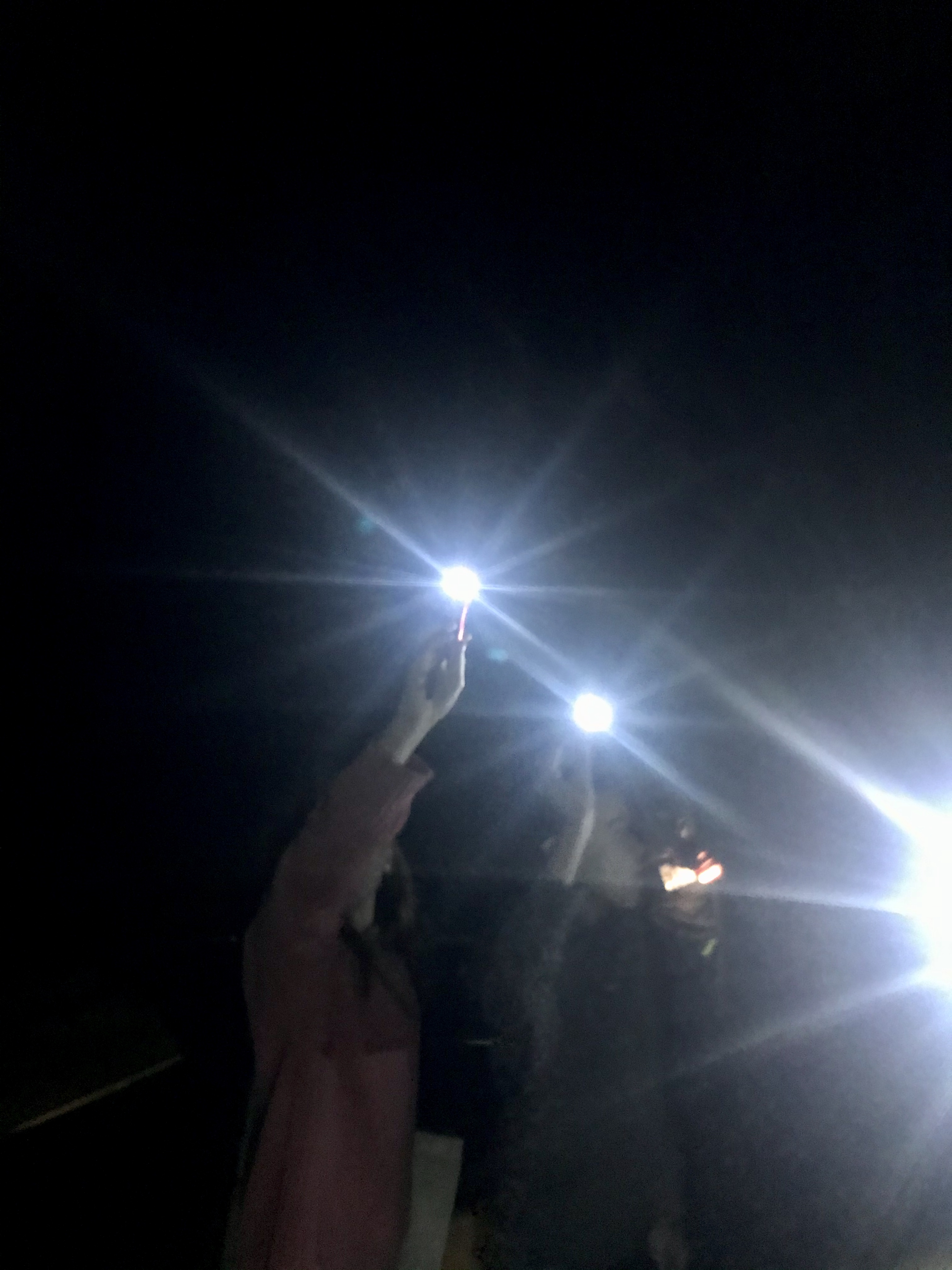 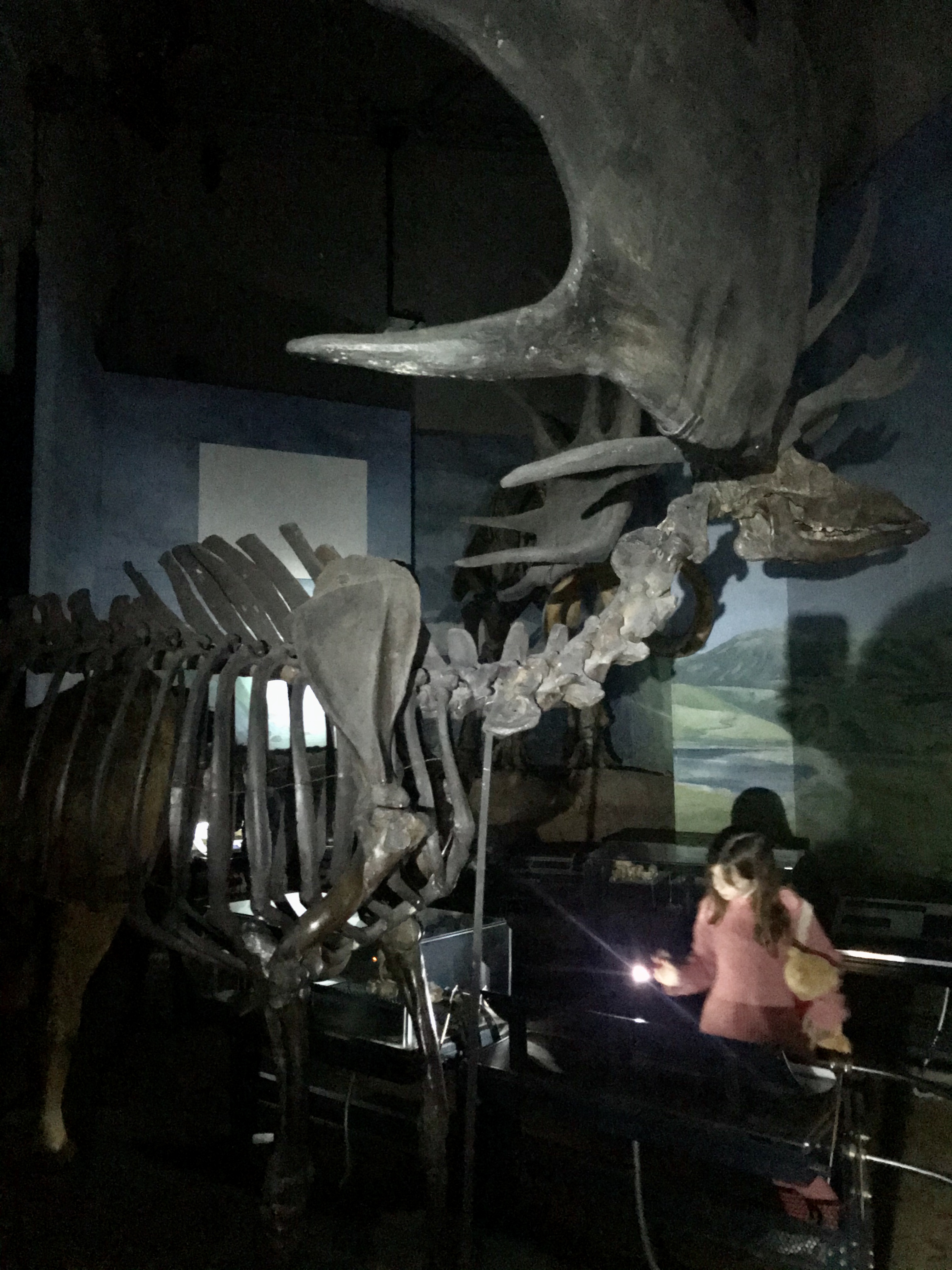 The dinosaur skeletons and replicas were undoubtedly the highlight for most of the children present tonight – dinosaurs were why we were here, after all – and it was interesting to learn more about the dinosaurs which would have lived in and around Wales, 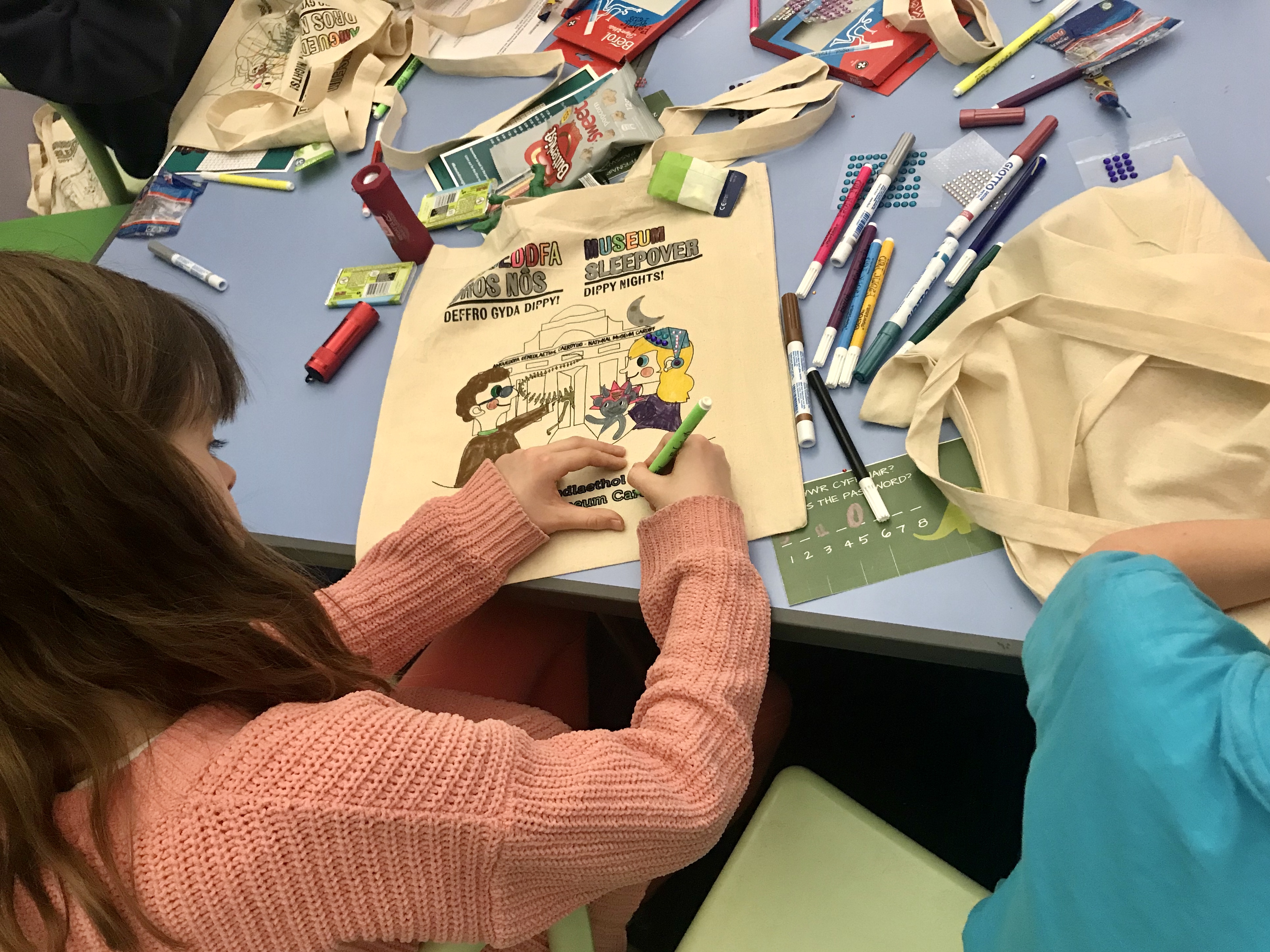 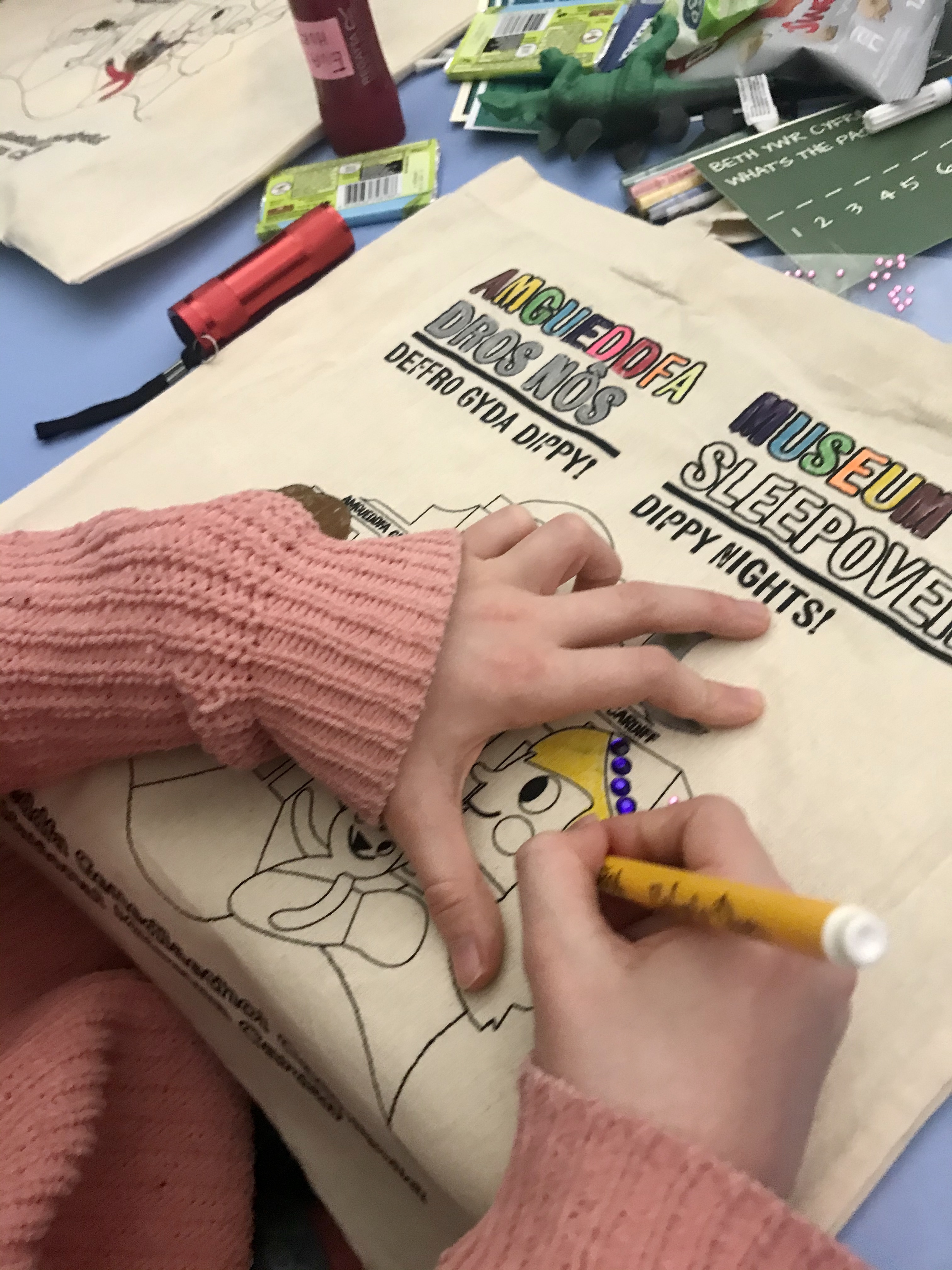 Our next activity was in the Clore Discovery Centre, a fascinating hands-on collection of artefacts and exhibits visitors can touch and examine under microscope. We had a little bit of time to look around but our main purpose was to decorate the special canvas reusable bags we’d been given on arrival. My children loved this, each giving their bag a distinct look, with fabric pens and stick-on gems, and they’ve loved having this memento from the experience.

It was then time for a refreshment break. We’d had tea before arriving at the museum, but after almost two hours my children were definitely getting peckish again. Everyone was able to choose a sandwich (gluten-free/dairy-free/vegan options etc were available as we’d had to fill in dietary requirements on our booking forms), and then given a dinosaur meal box, which contained a packet of crisps and a couple of sweet treats. Hot chocolate, or tea/coffee, was available from the museum café, and guests were invited to add cream and marshmallows to these at a hot chocolate station. 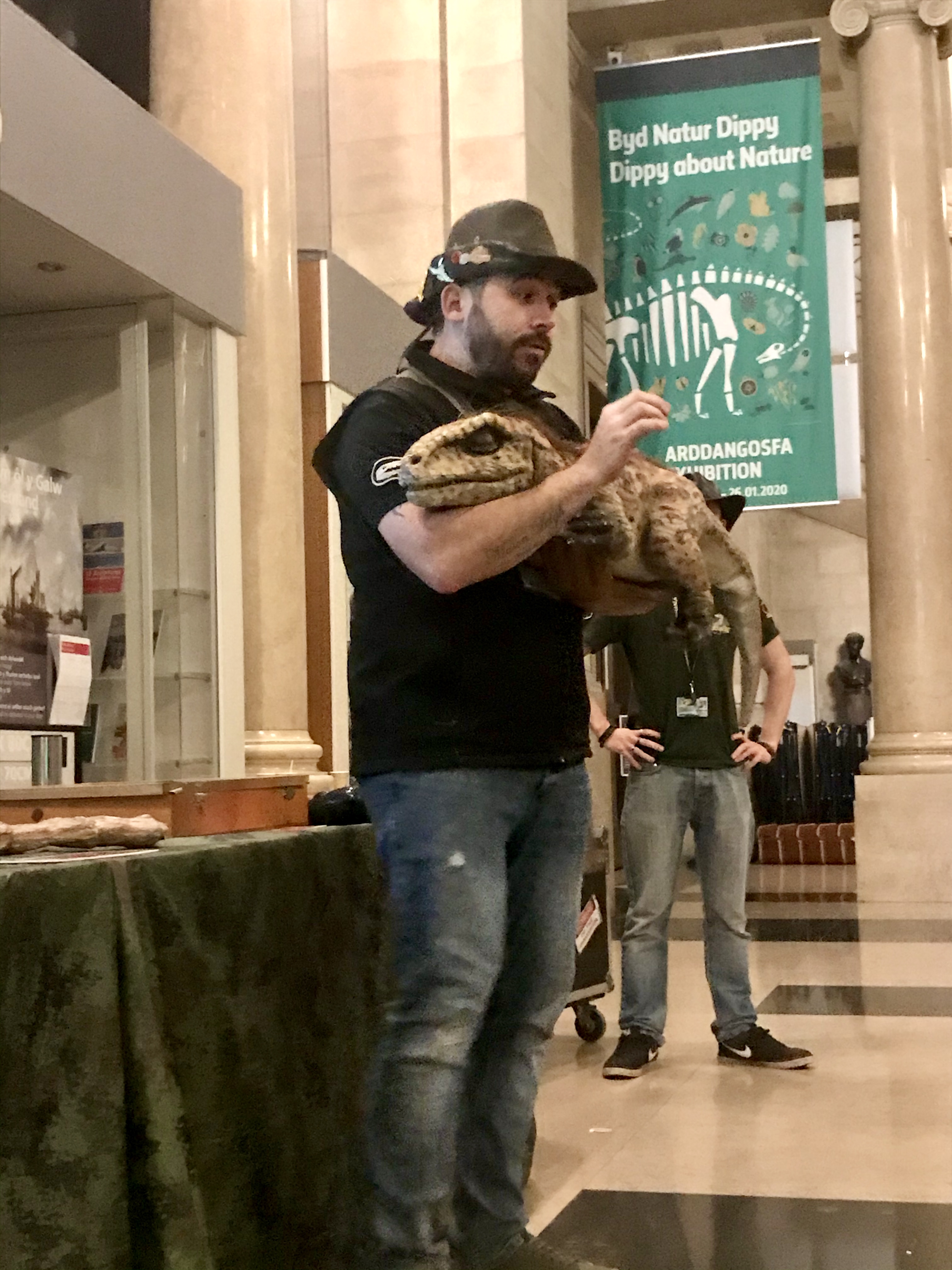 Next up was a show from Dino4Hire, a Swansea-based company who combine dino facts with hatching eggs and animatronic dinosaurs that move and roar.

They gave us an introduction to different kinds of dinosaurs (there are more than 1,200!), tested our dino knowledge, and showed us a few fun videos about some of the more common dinosaurs. 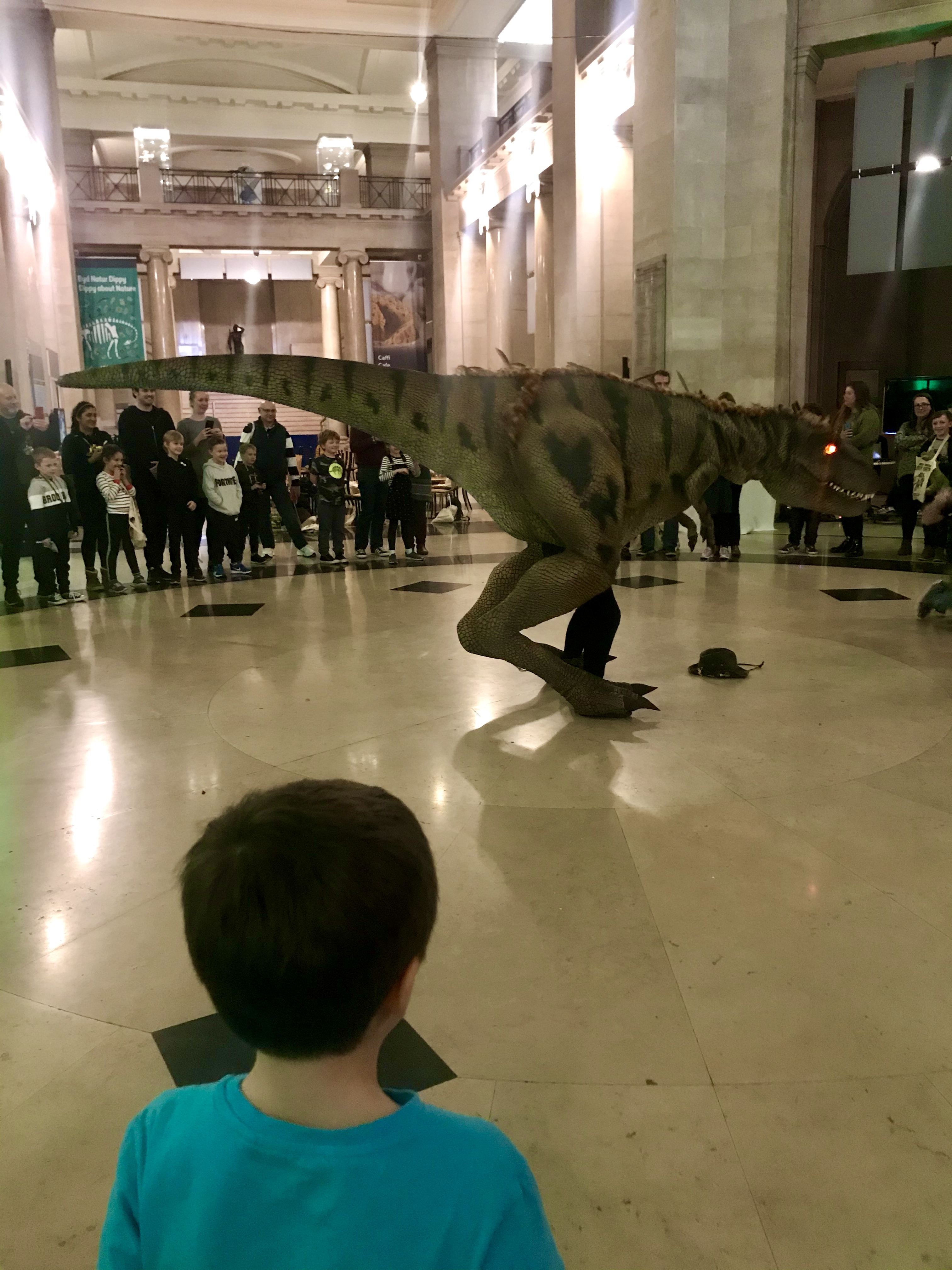 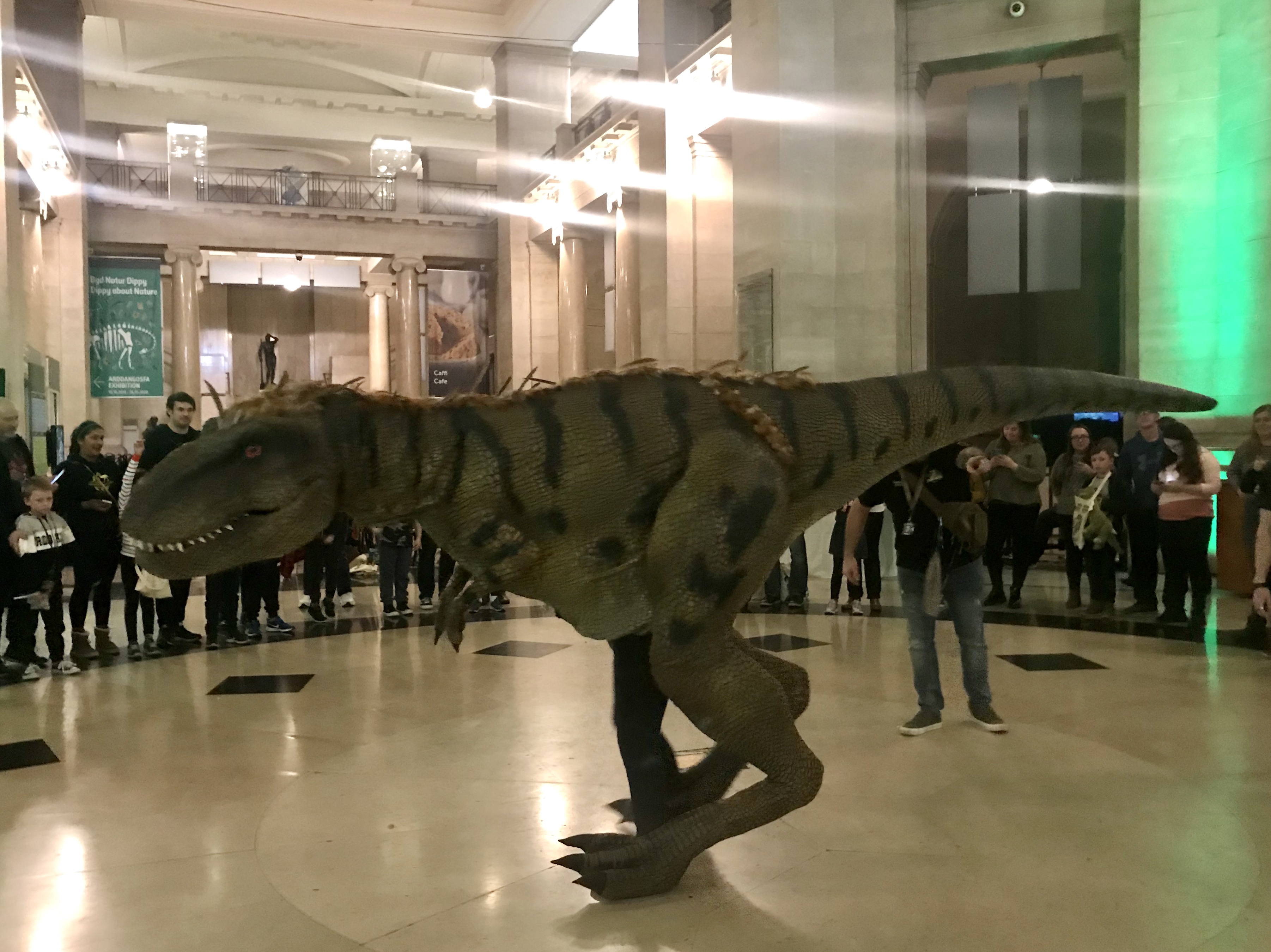 We then got to meet some of their ‘real’ dinosaurs, including the highlight of the session, Ronnie, a walking, talking T-rex with glowing eyes who stands at 4 ft tall. We had to stand in a circle for this, while Ronnie met everyone in turn, tried to knock over his handler Ranger Chris with his tail, and even tried to eat the hat off the head of a child volunteer.

It would have been nice if there had been more time for the children to have their photos taken with the dinosaurs, but with such an action-packed evening you can understand that time was of the essence.

The perfect choice of film 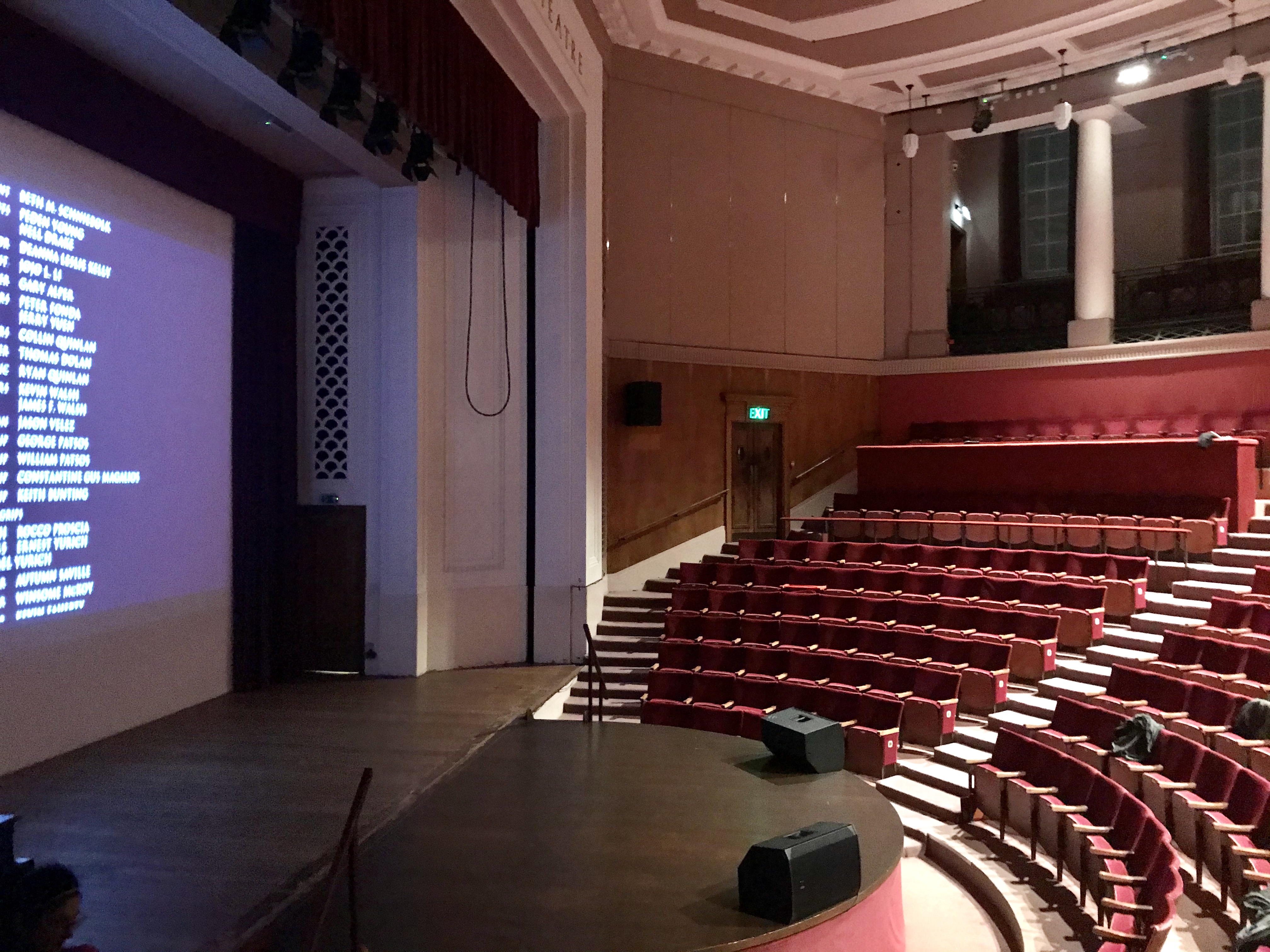 From there, we headed into the museum’s Reardon Smith theatre for a screening of Night at The Museum, which stars Ben Stiller as Larry, a newly-recruited night watchman at New York’s Museum of Natural History. As the museum’s doors close, he soon discovers that all the exhibts come to life at night, due to a magical Egyptian tablet.

There’s a brilliant supporting cast, including Robin Williams as a wax model of Theodore Roosevelt, Owen Wilson as Jedediah, a miniature cowboy figure; Ricky Gervais as the museum manager and Dick Dan Dyke as Cecil Fredericks, the veteran security guard. Amazingly, my children had never seen this film before, but they absolutely loved it and are keen to watch the sequels. 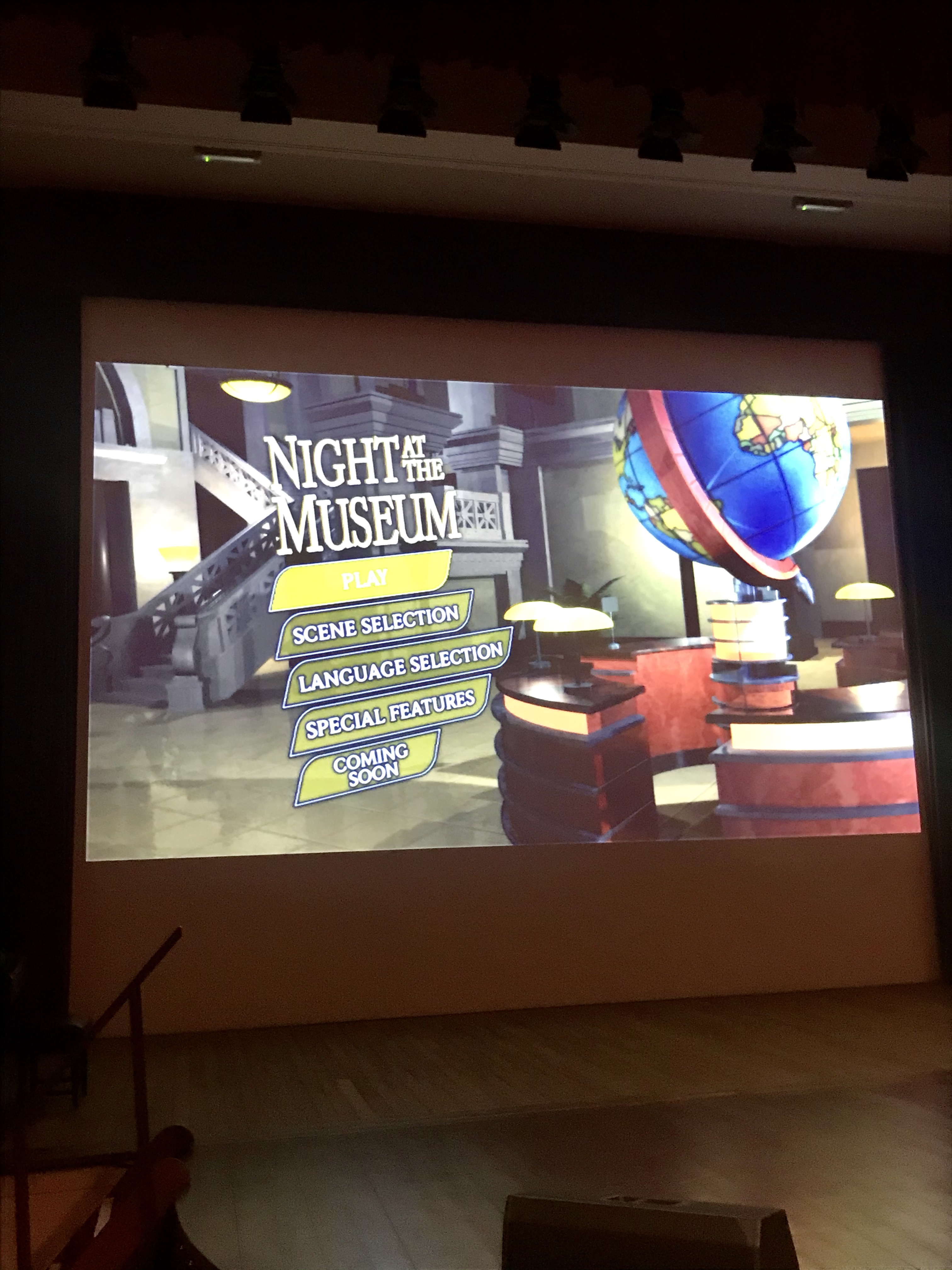 Bedtime and lights out

As the film credits rolled, we returned to the museum foyer to discover that our beds had been laid out for our giant sleepover in the shadows of Dippy. We’d been told to bring our own sleeping bags and pillows, while the museum provided basic roll mats – no proper camp beds were allowed, although some people bought their own thicker camping mats along too. We got changed into our pyjamas and brushed our teeth in the museum’s toilets – considering how many people were staying, this went remarkably smoothly. 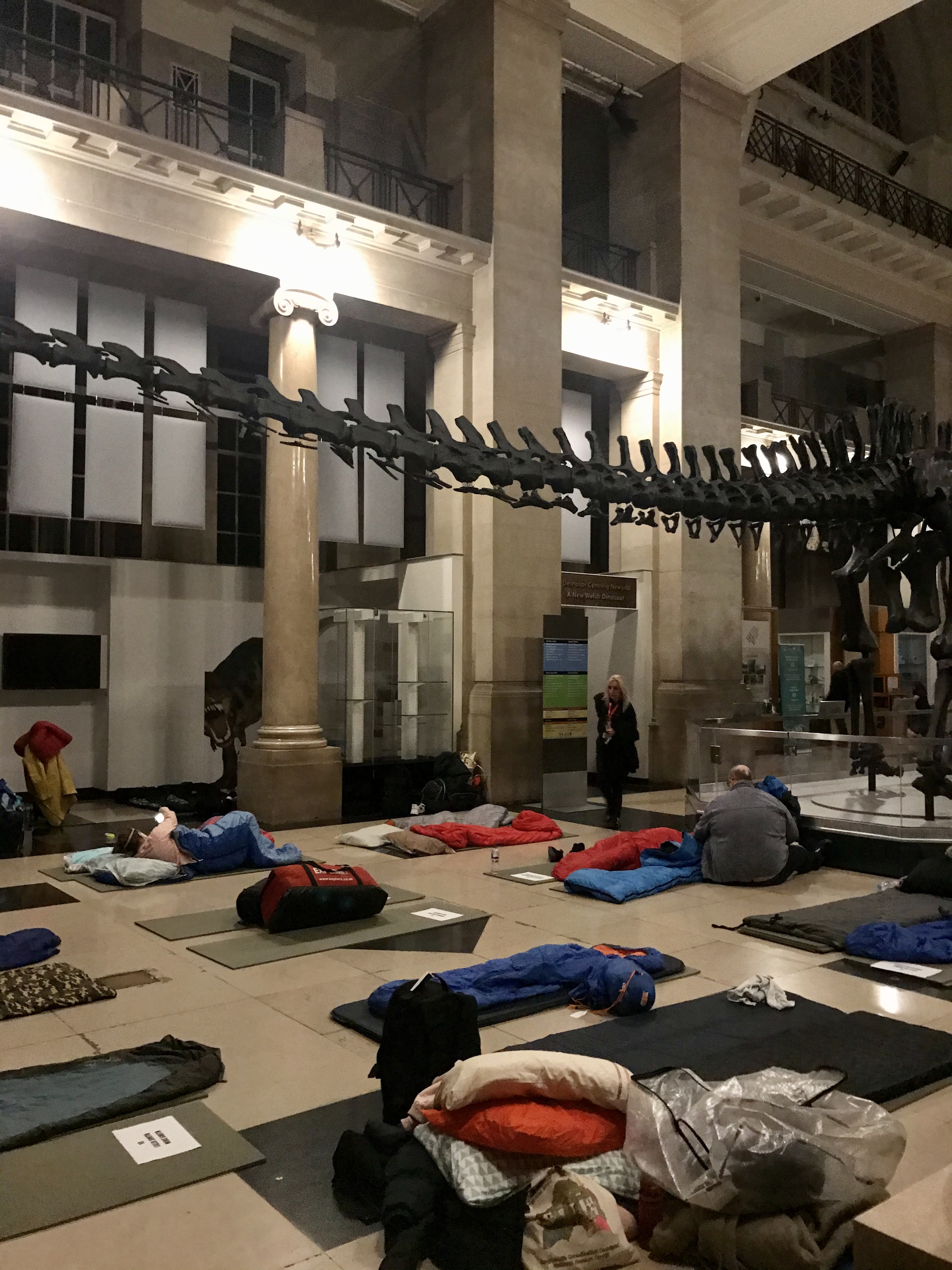 We’d worried it was going to be really cold over night, so we wore our fleecy camping onesies over our pyjamas. Bit actually, we weren’t cold at all; if anything we were a little warm. As I mentioned above, we didn’t have the best night’s sleep… but we were there for the experience, rather than the slumber, so we cwtched up and got through the night. It was incredibly surreal sleeping next to a dinosaur skeleton, and one of the most famous dinosaurs in the country at that, and it’s certainly something that will stay with us for a long time.

We were awake way before the official 7am wake-up call, which saw the lights coming on slowly followed by a dino roar. My children thought the dinosaur alarm was brilliant.

Everyone got dressed and started packing up ready for breakfast. This was served downstairs in the museum’s restaurant with a choice of cereal, fruit, and a sausage bap (again, veggie/vegan options available), juice, tea and coffee. 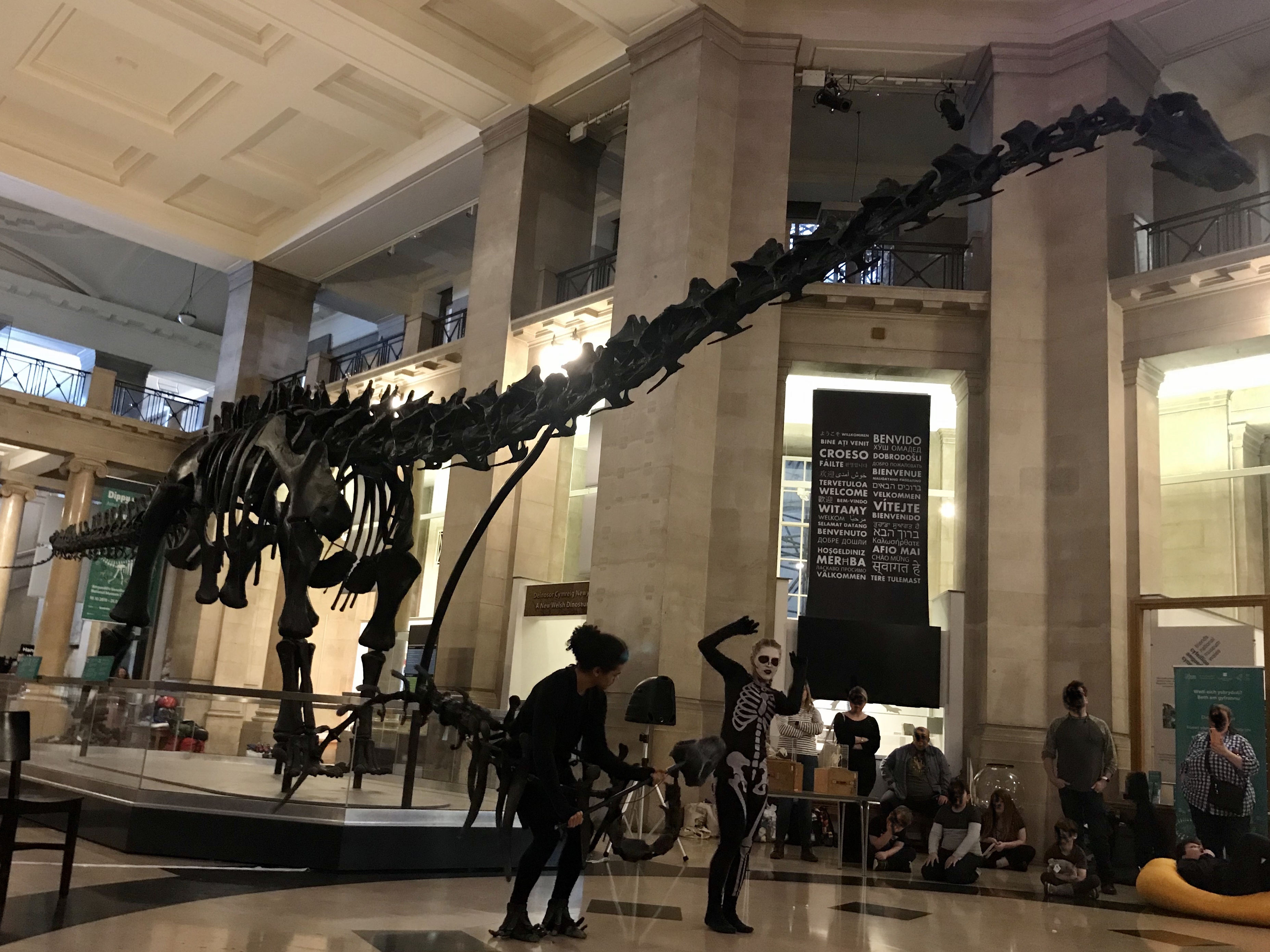 The museum’s galleries opened at 8am for us to have one more final private exploration around the collections; it’s so lovely to be able to explore without the usual crowds.

At 8.45am, two dancers from local dance group Rubicon presented a contemporary dino-themed dance which showed these creatures weren’t always to be feared, before we departed, with everyone receiving a certificate on the way out to prove that we had indeed spent the night with the dinosaurs of National Museum Cardiff.

Even without Dippy, the Museum Sleepover Dino Nights events have been a huge success. The next one is on Saturday 18 April with tickets already on sale, priced £50-£60, and suitable for children aged 6 to 12 and their families. More information here. It’s undoubtedly a ‘treat’ experience, in the same price bracket as a day at a theme park or similar. You do get a lot for your money, in terms of the unusual experience of sleeping in a museum, as well as the food, activities and entertainment. As a special, memorable experience, this is perfect for any dinosaur fans looking for something a little different to do for the weekend.

You might also like to know about the museum’s After Dark evening on Wednesday 19 February (during half term), from 6pm-9pm. This special after-hours event is free, although you need to register for tickets in advance, and will see a night of fun activities, mysteries and experiments, as scientists and engineers from the Museum and Cardiff University join forces for some amazing experiments. More information here.