Where better to start our role as Cadw blogger ambassadors than Caerphilly Castle? It’s the biggest castle in Wales, the second biggest in the UK after Windsor, and is just a 10-minute drive over Caerphilly Mountain from our home in North Cardiff.

The grey-stone structure, complete with turrets and a large moat, is exactly how you’d draw a castle if you were a child. In fact, when I showed my children a picture of where we were headed, they insisted on dressing for the occasion. Little Miss E, my 5¾-year-old daughter, couldn’t wait to put on her pink princess dress while Little Man O, my just-turned-four-year-old son, wore his knight’s outfit, complete with sword and shield. Cardiff Daddy and I felt a bit guilty that we didn’t have anything suitable for Baby Boy I, their 18 month old brother, to wear, but he didn’t seem to mind. 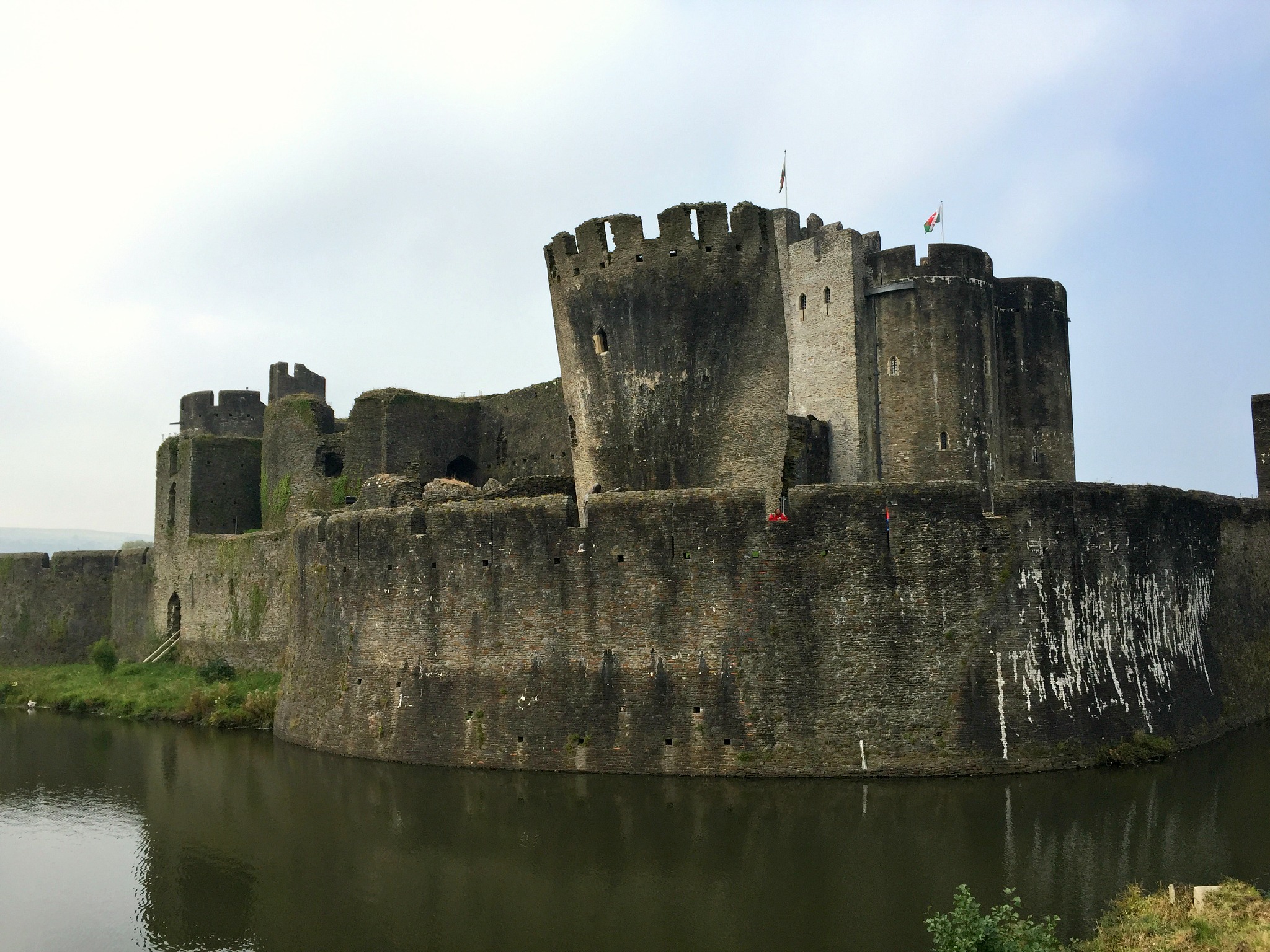 We made the most of the warm October weather we’re having and headed to Caerphilly Castle on Saturday afternoon, along with my parents who have been Cadw members for as long as I can remember, and who took me and my brothers here, and to just about every other castle in Wales, when we were children.

We managed to park for free on one of the roads outside the castle, while my parents opted for the nearby car park, which cost a couple of pounds for the afternoon.

From there, we walked along the paths alongside the moat towards the castle. I should warn you, this involved a fair bit of bird poo dodging and checking of shoes and buggy wheels! Little Man wondered if there were any dragons living in the mote – but we didn’t see any!

My children were so excited to cross over the bridge and through the gate into the castle itself. Dating back to the second half of the 13th century, Caerphilly Castle was built under the orders of Gilbert ‘the Red’ de Clare, a red-headed nobleman of Norman descent, who eventually succeeded in thwarting off his enemy, the Welsh prince, Llywelyn ap Gruffudd. 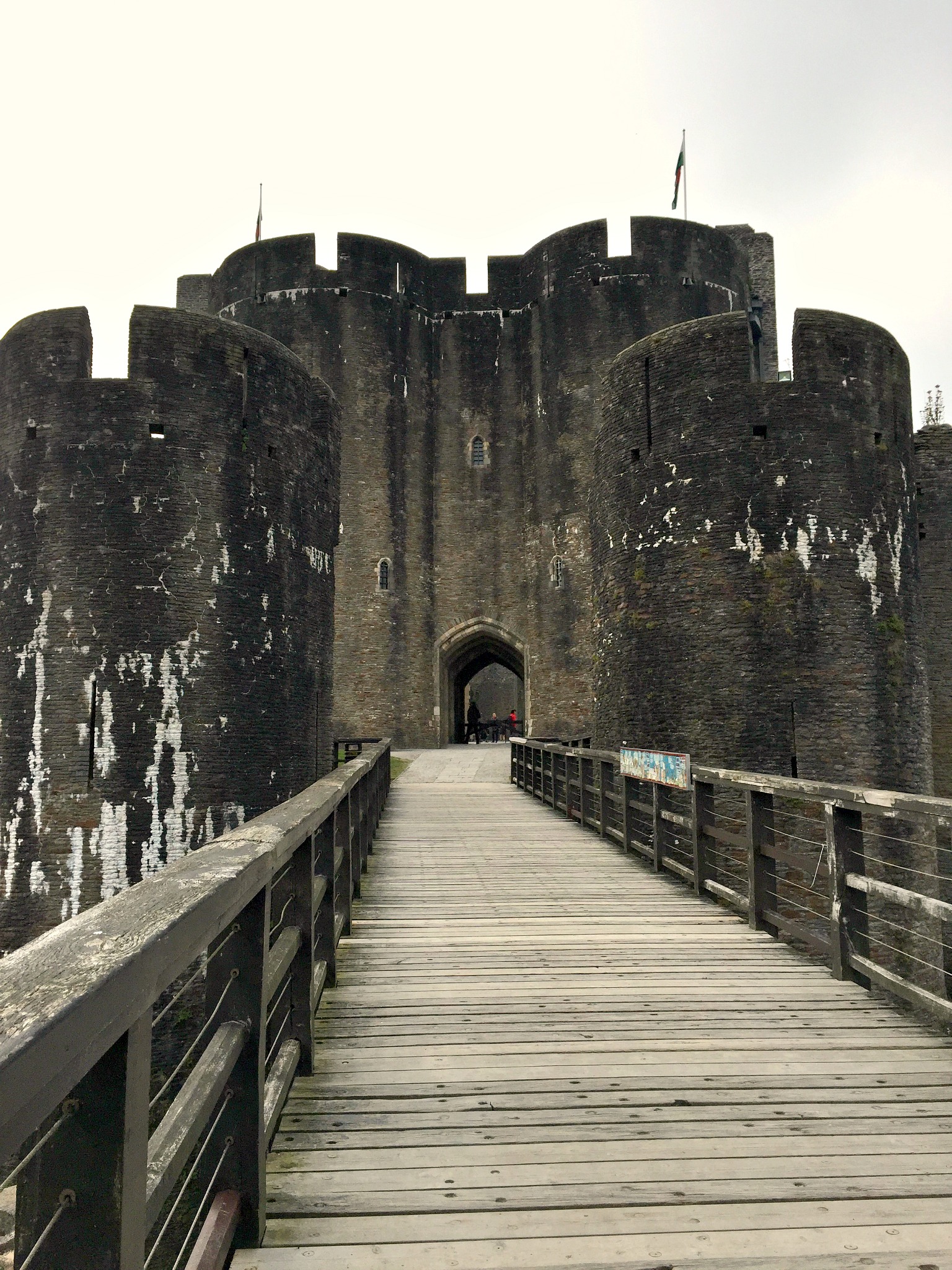 Walking around the grounds, you can sense just how powerful its defence was, with turrets and walls within walls, and slotted windows all around.

To explore the turrets, castle walls and rooms inside, you need to use the spiral stone stair cases. My children thought the ‘roundy roundy steps’, as they called them, were brilliant fun and wondered if we could have some in our house.

The staircases are definitely not suitable for wheelchairs or buggies though, although the grounds of the castle are easy enough to navigate around. Baby I managed to climb most of the steps by himself with a lot of grown-up help to keep him safe, although you’d need a baby carrier or sling for younger babies.

My children loved the fighting gallery with its life-size model soldier and sound effects, as well as looking through the slotted windows, pretending to fire bows and arrows at the enemy below. 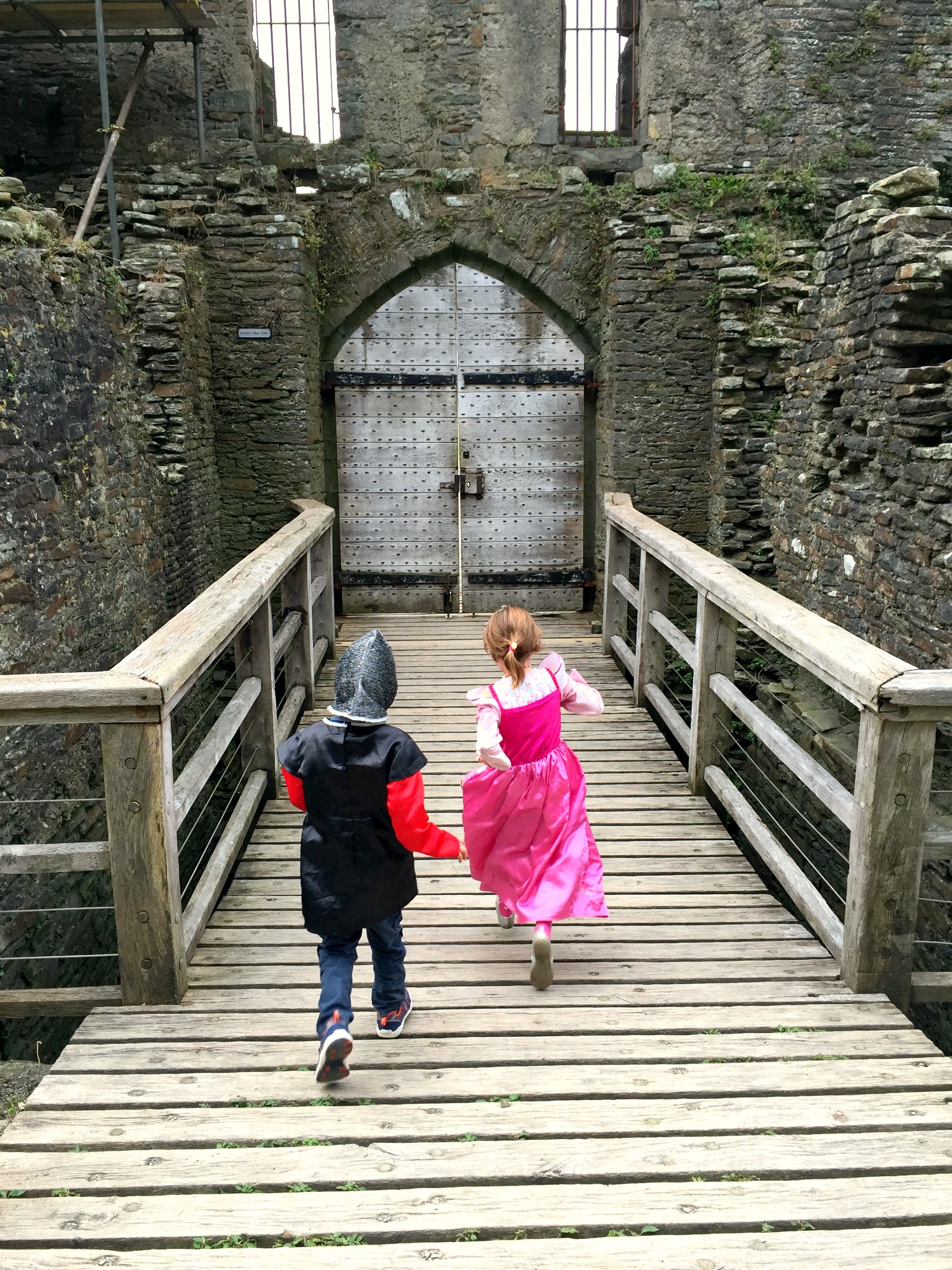 The staircases also take you to a number of large rooms that made up the living quarters. However, unlike the more modern Castell Coch or Cardiff Castle, which my children have visited previously, the rooms at Caerphilly are unfurnished, so there’s no real visual representation of what life would have been like for those who lived there. They had great fun imagining though and I think their costumes helped them think about what life might have been like back in medieval Wales – Little Miss E needed to hoist her dress up to navigate the stairs for example. She and Little Man thought the medieval toilets were hilarious, and were quite concerned about people’s bottoms getting cold on the stone. They also loved the enormous chimneys which they said would be really easy for Father Christmas to come down.

Little Man’s favourite part of the castle was the grand hall. Coincidentally, this was one of the places Cardiff Daddy and I viewed when we were getting married. Given I spent my childhood visiting castles, I would have loved a castle wedding but sadly they didn’t have any dates free for about two years at the time we were looking. My children enjoyed sitting at the medieval style banqueting table, pretending to order their servant (me!) about.

Little Miss E, who is usually unashamedly girlie, surprised me by saying she most enjoyed seeing the battle equipment. The lawns inside the fortress are home to a trebuchet, a mangonel, a perrier, and a ballista, and she loved discovering how they were used to fight against the enemies. 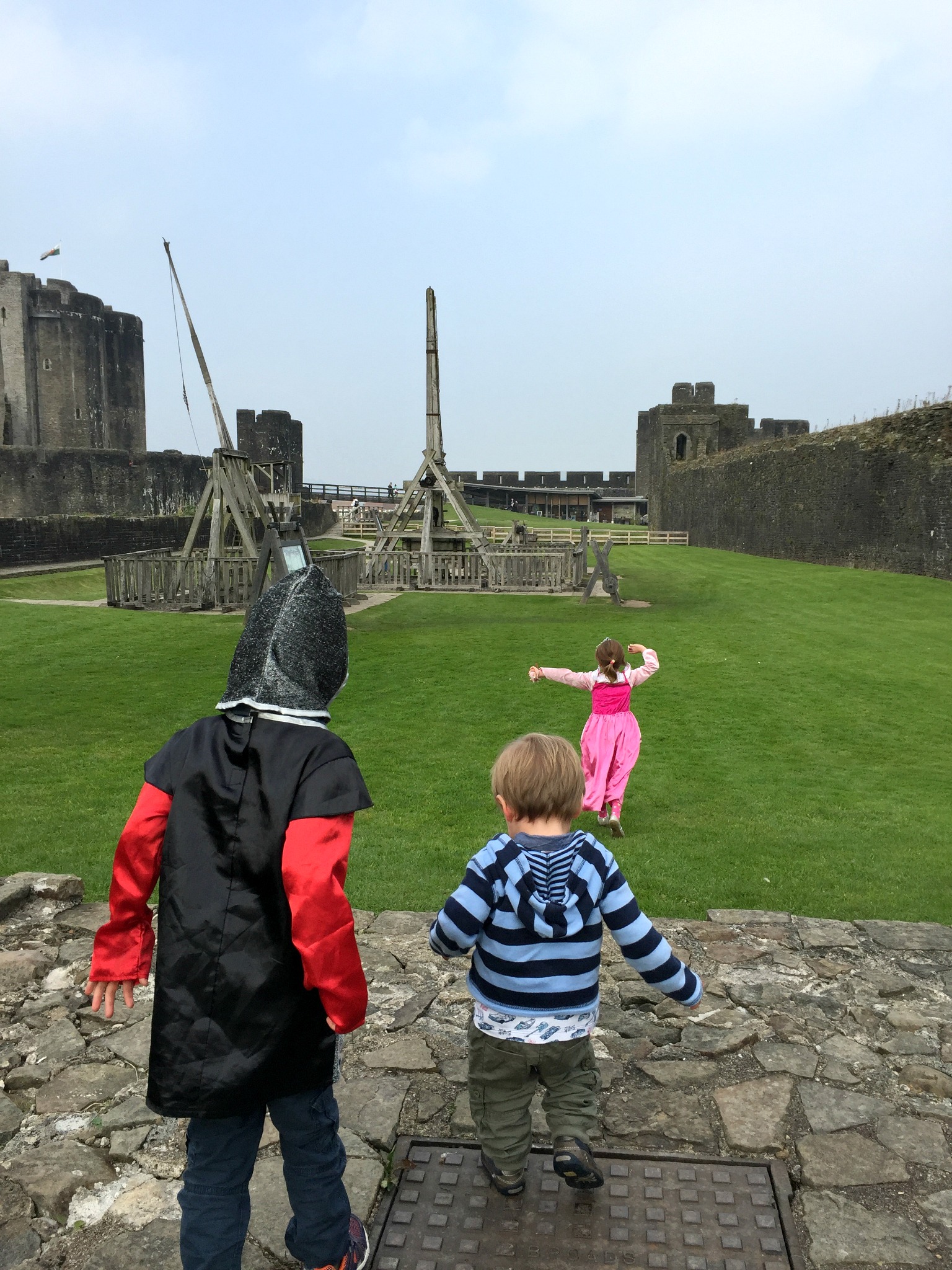 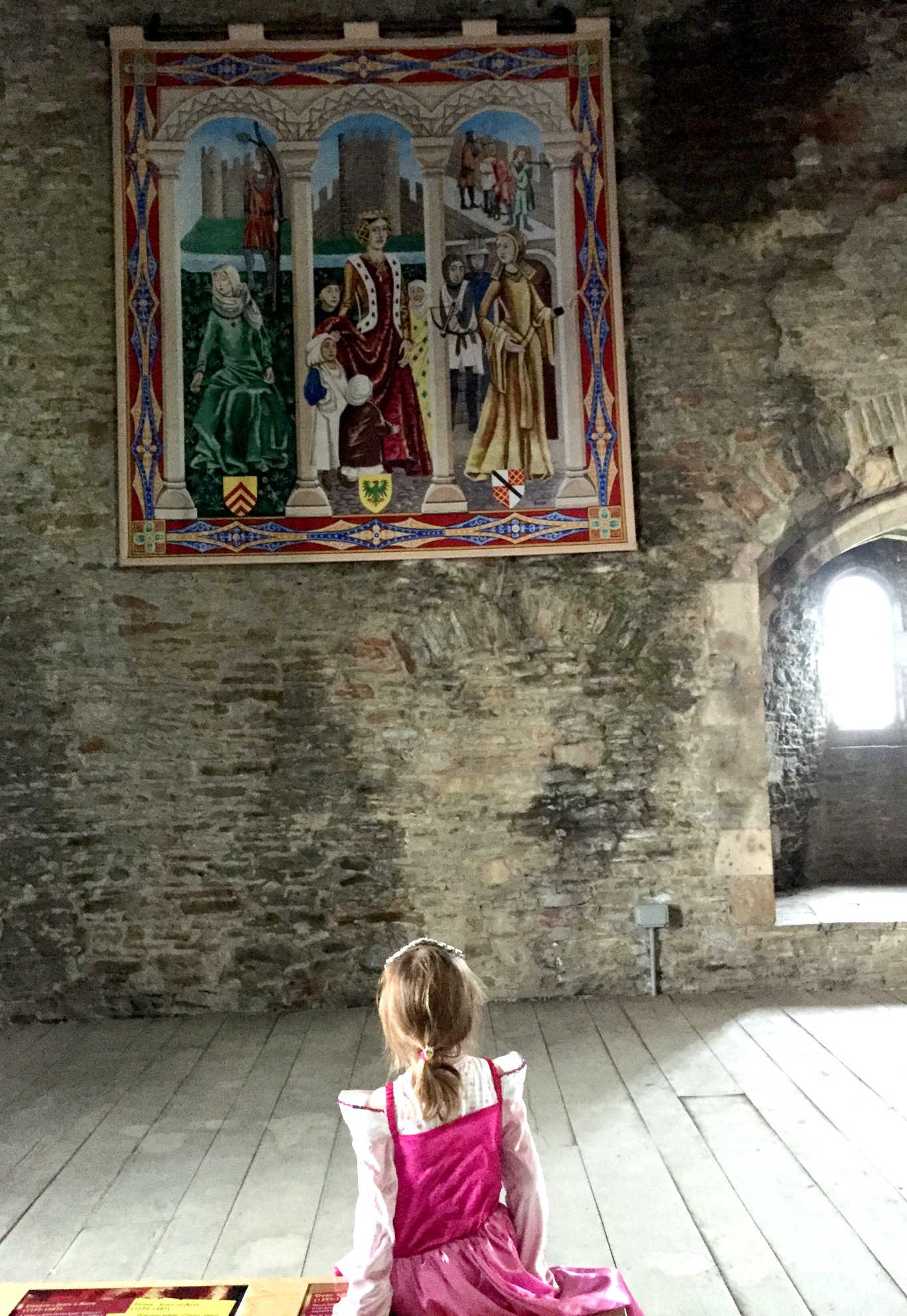 She was also quite taken with the picture of three significant women from the castle’s history in one of the rooms at the front of the castle. Alice de Lusignan was the neglected first wife of Gilbert de Clare, who built the castle, and whose ghost is said to haunt the castle; Joan of Acre, the much younger second wife of Gilbert de Clare, and daughter of Edward I, who was widowed and later married a commoner against her father’s wishes; and Eleanor de Clare, daughter of Gilbert and Joan, who, when the castle was besieged, managed to hold out for six weeks until help arrived. It’s great to see such women being celebrated at a time where men dominated society. 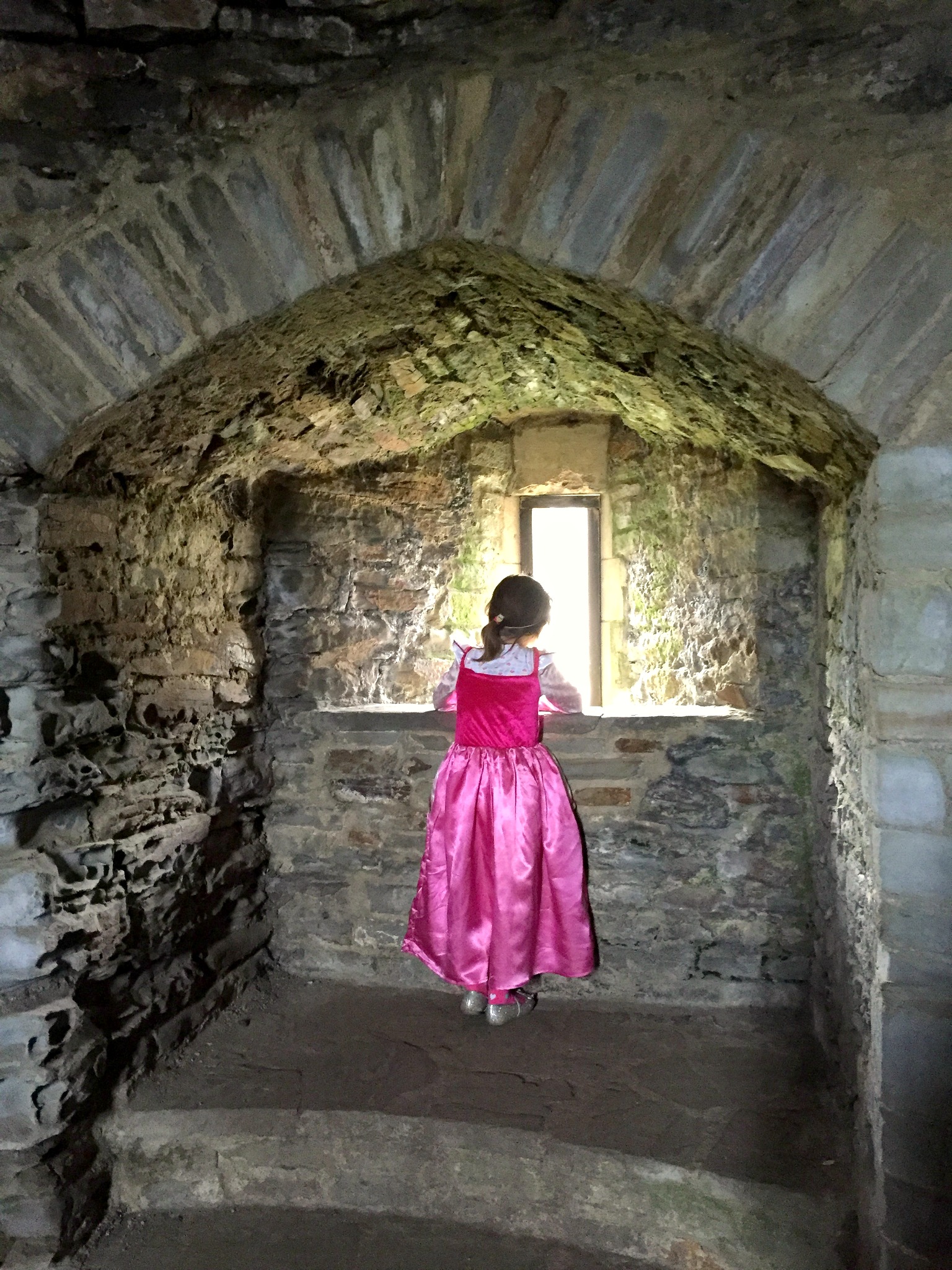 Facilities on site include toilets and a baby change facility, a kiosk selling hot drinks and cakes, and a gift shop, with plenty of pocket-money-priced souvenirs.

We spent a good two hours exploring Caerphilly Castle – it’s more of a half day trip than a whole day out.

I’m a great believer believer that the best way to learn is by seeing and doing and my children certainly did that as they explored the castle. They children came away enthused about history and with a greater understanding of what life was like in the past – and are already asking when our next castle adventure will be.

Have you been to Caerphilly Castle with your children? What did you think of it? You can let me know in the comments below, on the Cardiff Mummy Says Facebook page or by tweeting me on @cardiffmummy

Or for the chance to visit yourself for free, then have a read of this post about our role as Cadw Ambassadors, which also features a competition for one Cardiff Mummy Says reader to win a 7-day family explorer pass, which give free entry to all Cadw sites in Wales for two adults and all accompanying children for one week.

Homepage » Cardiff » Visiting Caerphilly Castle with a princess and a knight