Last year’s decision to move Cardiff Bay Beach to the Barrage wasn’t a popular one. It had to relocate due to the National Eisteddfod coming to Cardiff – but visitors with young children found the extra distance hard, and many were disappointed by the lack of splash pool, replaced by a small water feature that didn’t quite cut it in the heatwave.

Well, the good news is that the urban beach is back in its usual location for 2019 – Roald Dahl Plass, right outside Wales Millennium Centre. It opened on Saturday and is already proving popular with locals and tourists alike. 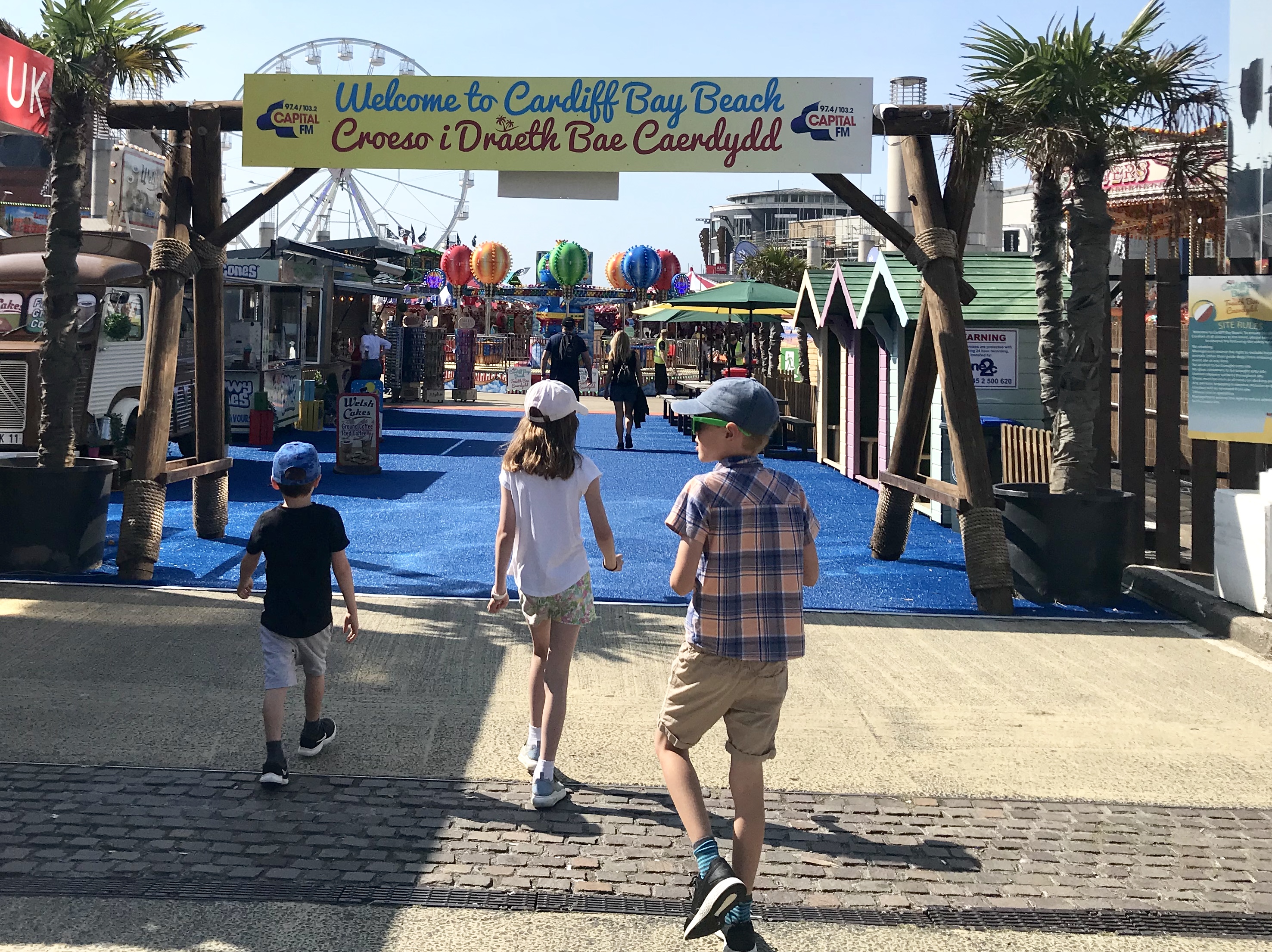 It’s had a bit of a shift around from previous years, with the ‘beach’ – a giant sandy area with wooden beach huts and striped deck chairs – in the middle, the rides and food stalls around the edges, and the return of the splash pool at the bottom, near the bridge area.

We headed down earlier in the week. With the super-hot weather, we knew it was going to be busy and so arrived at 10am for when it opened. This was definitely a good decision because the place was so lovely and quiet for the first hour and a half, with no queues for the rides, and just a few children enjoying the sand and water. By the time we left at 2.30pm it was really busy and, in the heat and with very little shade, and with three children to one parent, I must admit I was beginning to find it stressful. 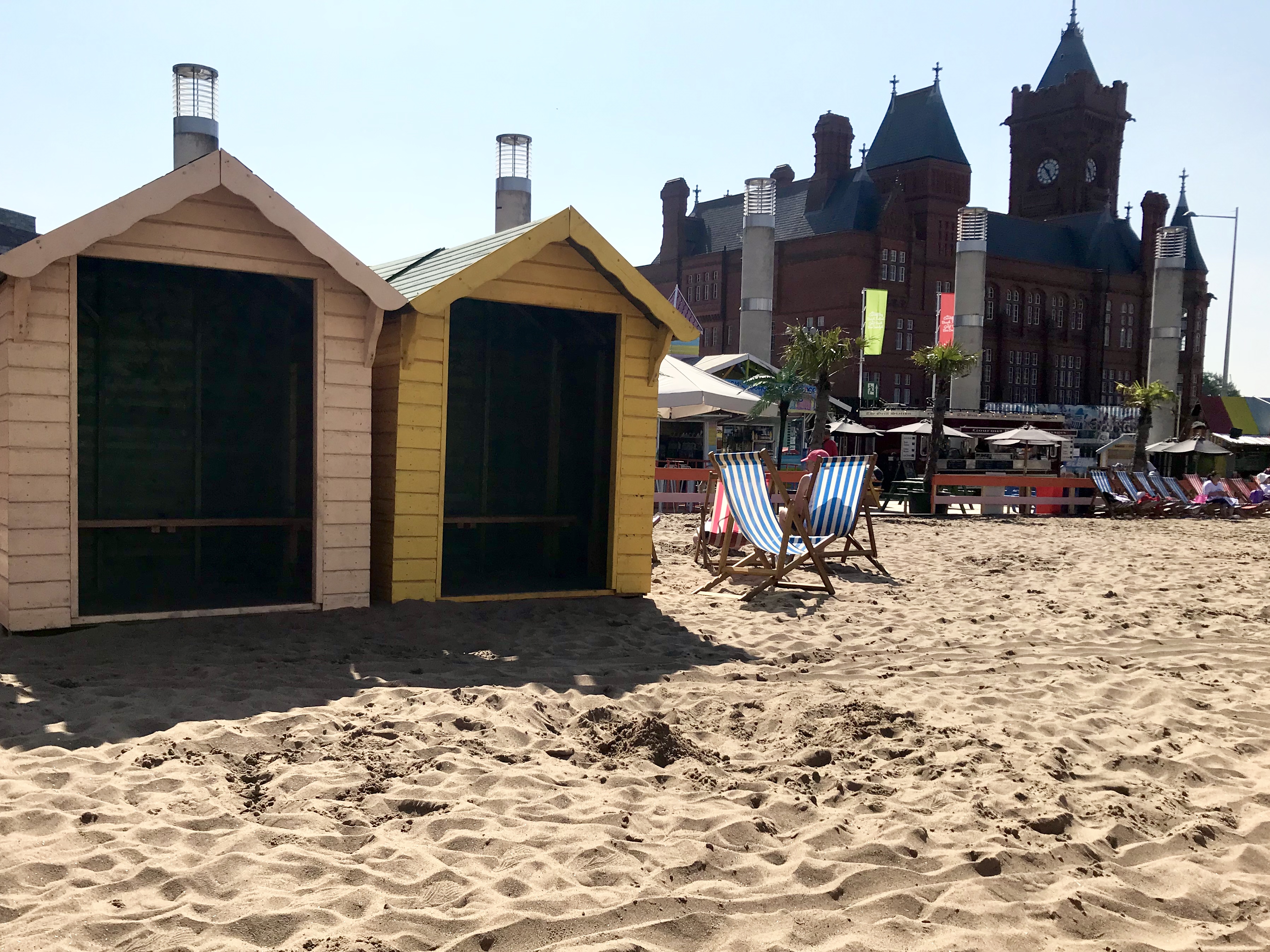 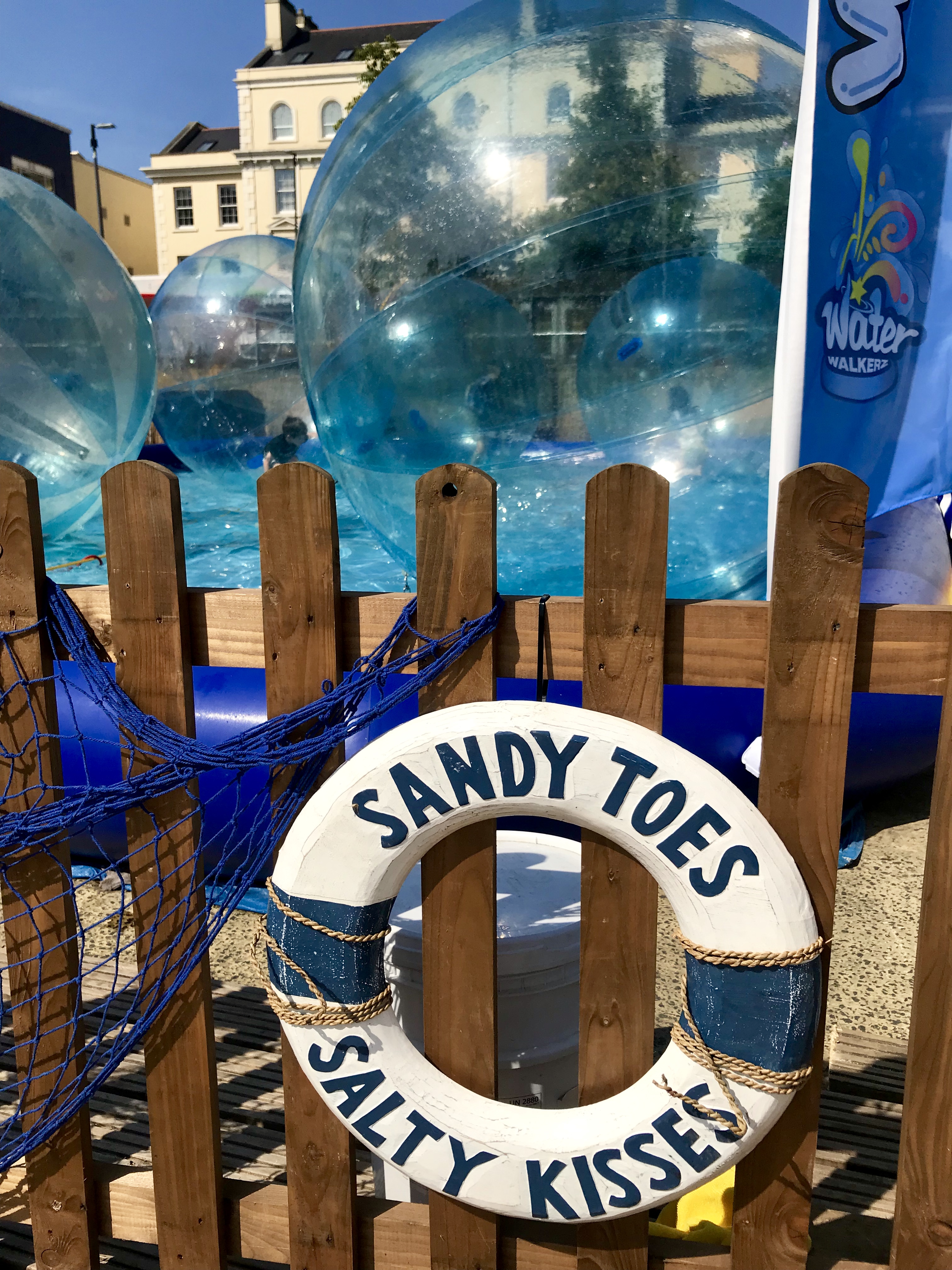 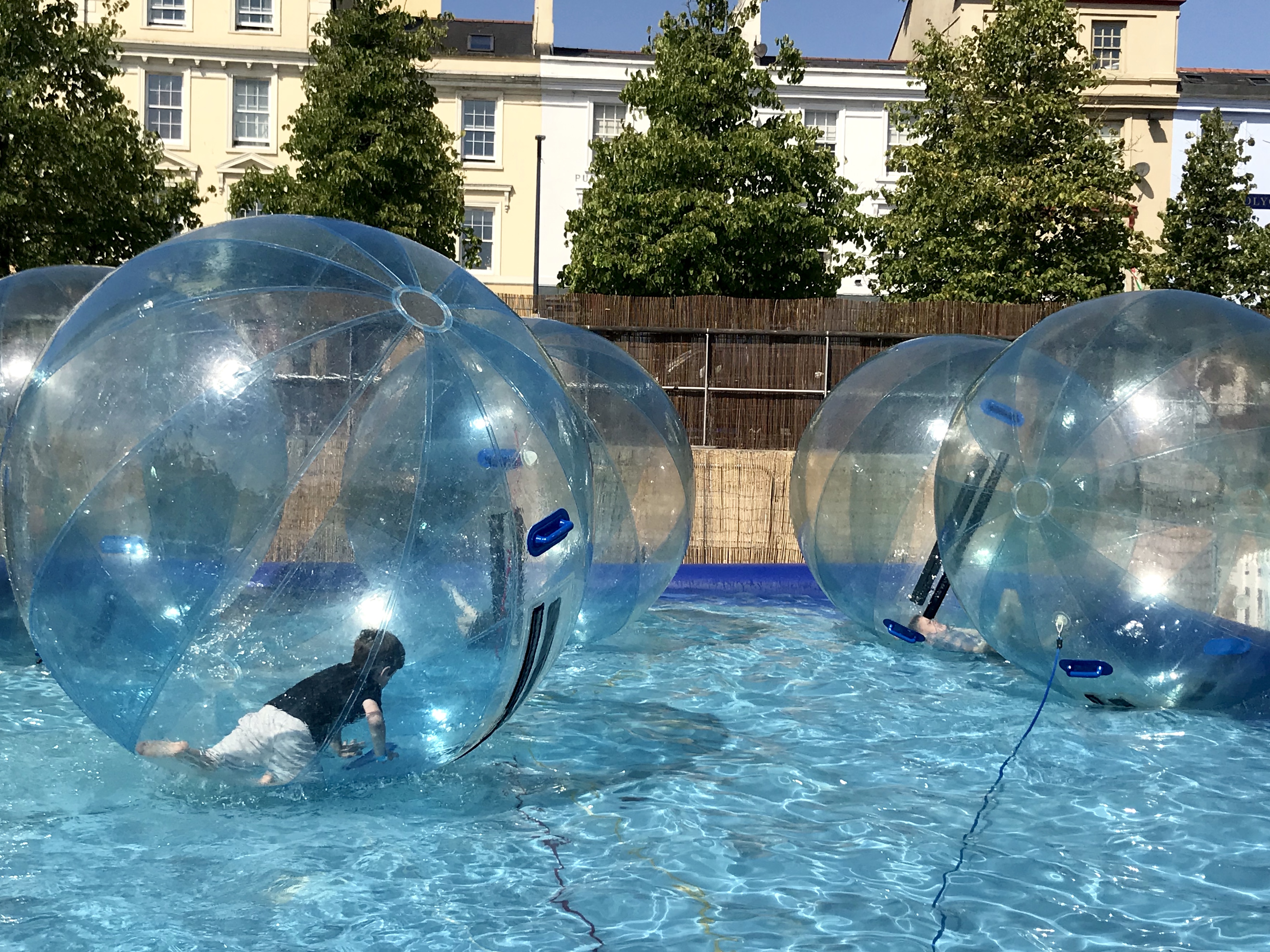 Our first stop was the rides and in particular the water balls, a return from last year and a real favourite for my 9, 7 and 5 year olds. At four tokens per person, and each of the tokens costing £1, these are some of the most expensive rides – but my three would testify to them being worth it. They also love the pirate fun house, which seems to be at Cardiff Bay Beach and Winter Wonderland every year; as well as the bungee trampolines; and the mini roller coaster. 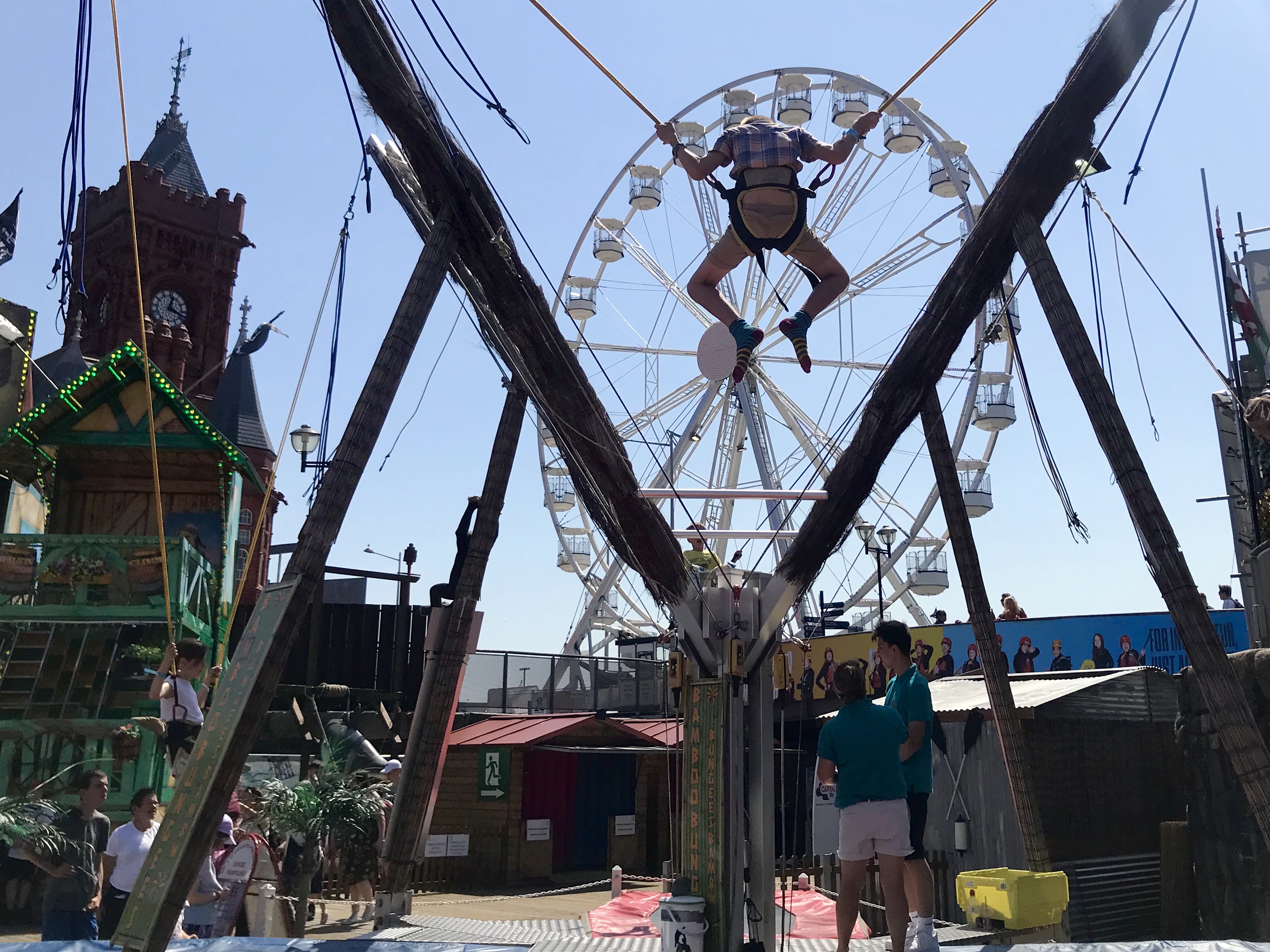 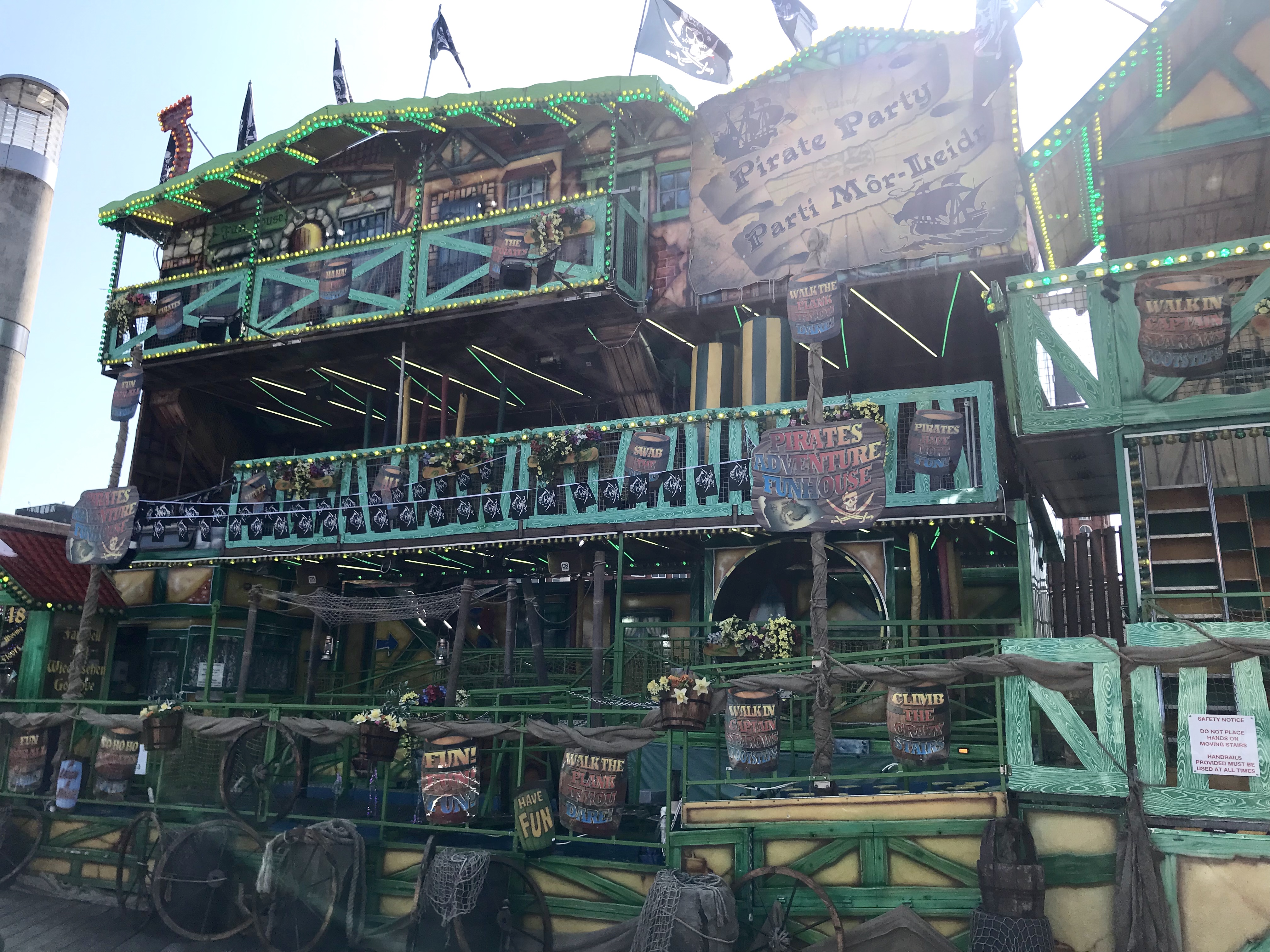 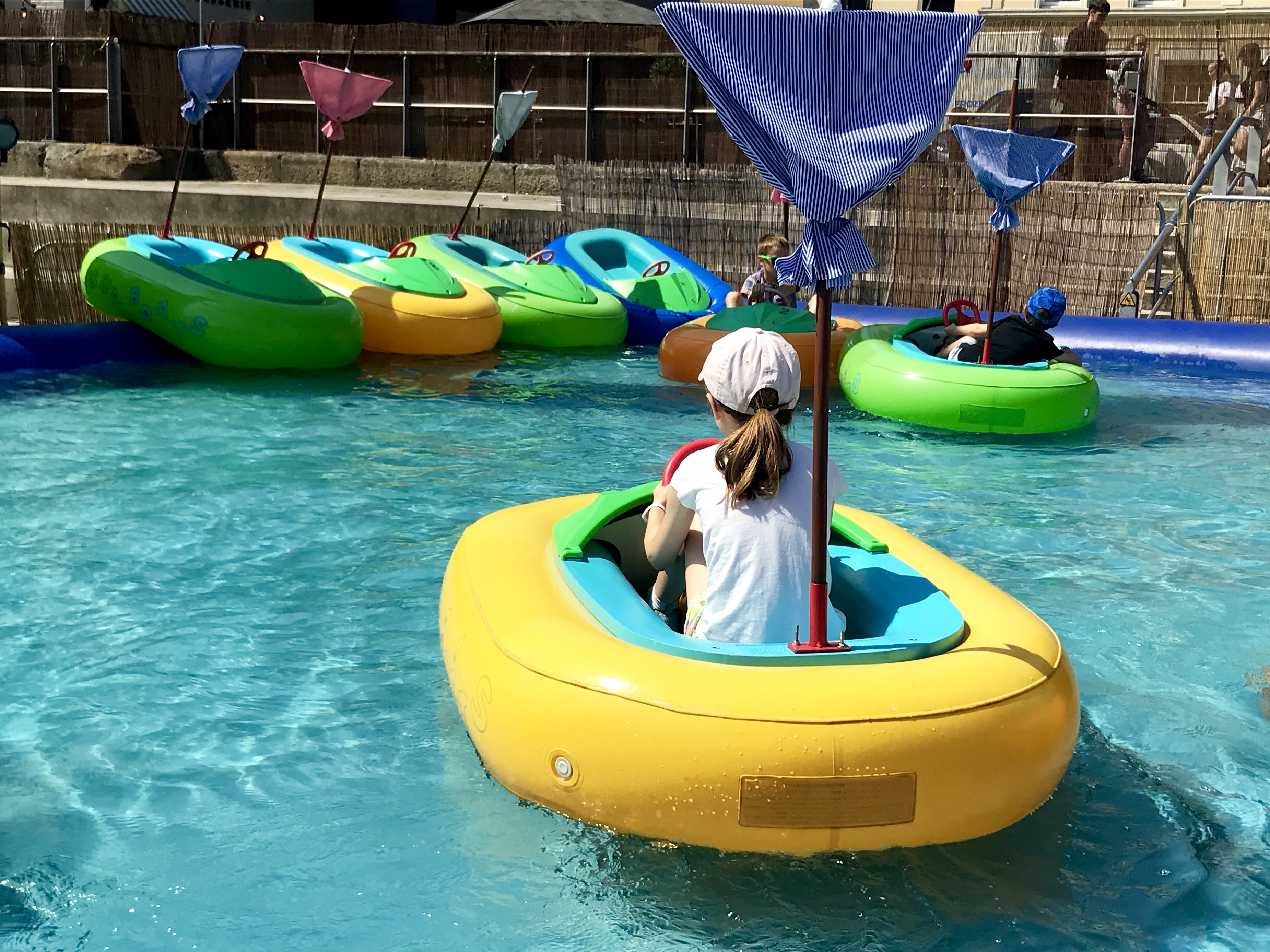 For older children, there’s the Sizzler and for younger kids, an assortment of gentler rides including mini cars and tea cups. The majority of rides are two tokens.

There’s also an assortment of traditional fairground games with prizes to be won, such as hook a duck, costing one to two tokens.

Situated just outside the main area, is the big wheel, which costs £4 per person. 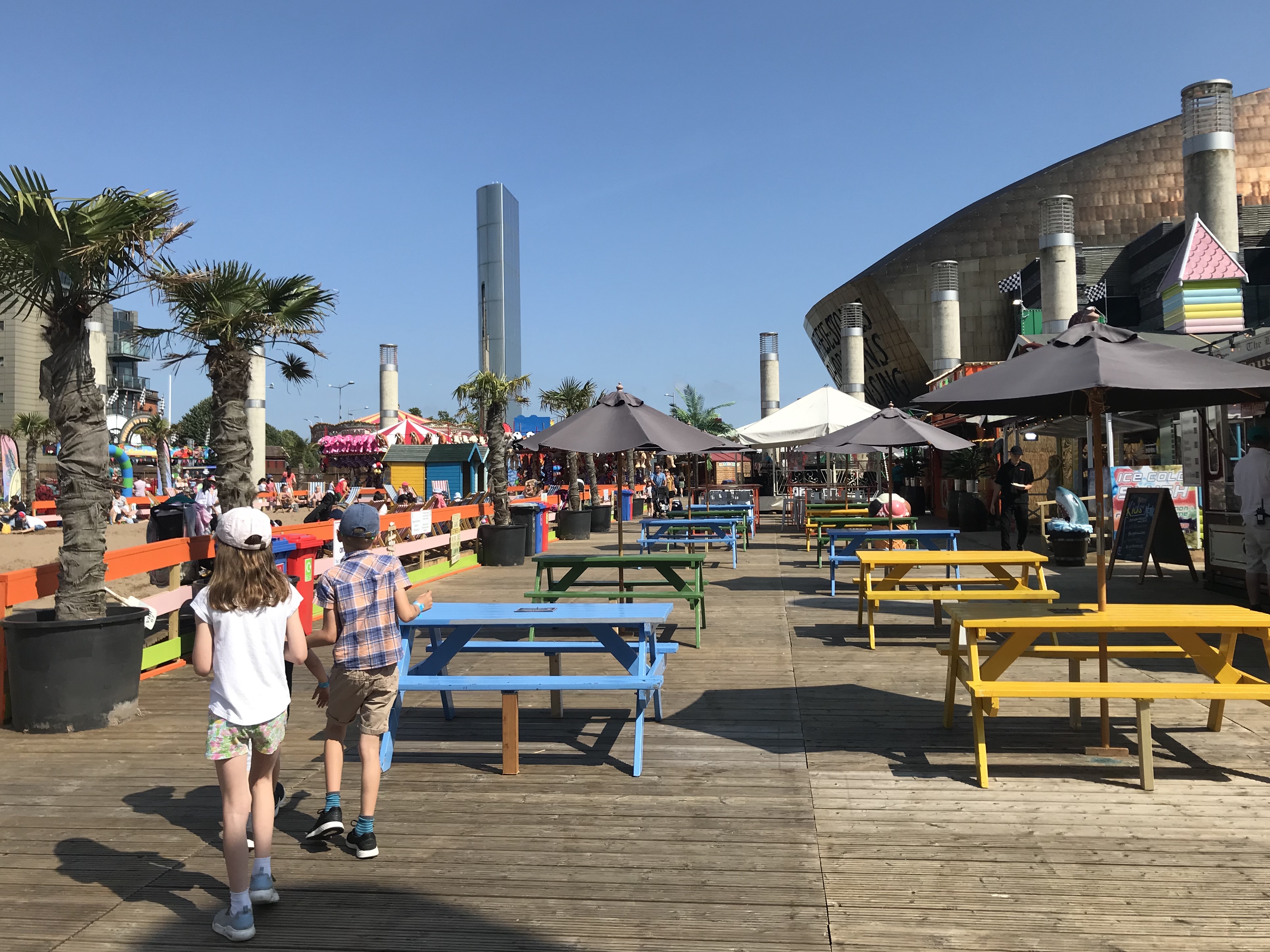 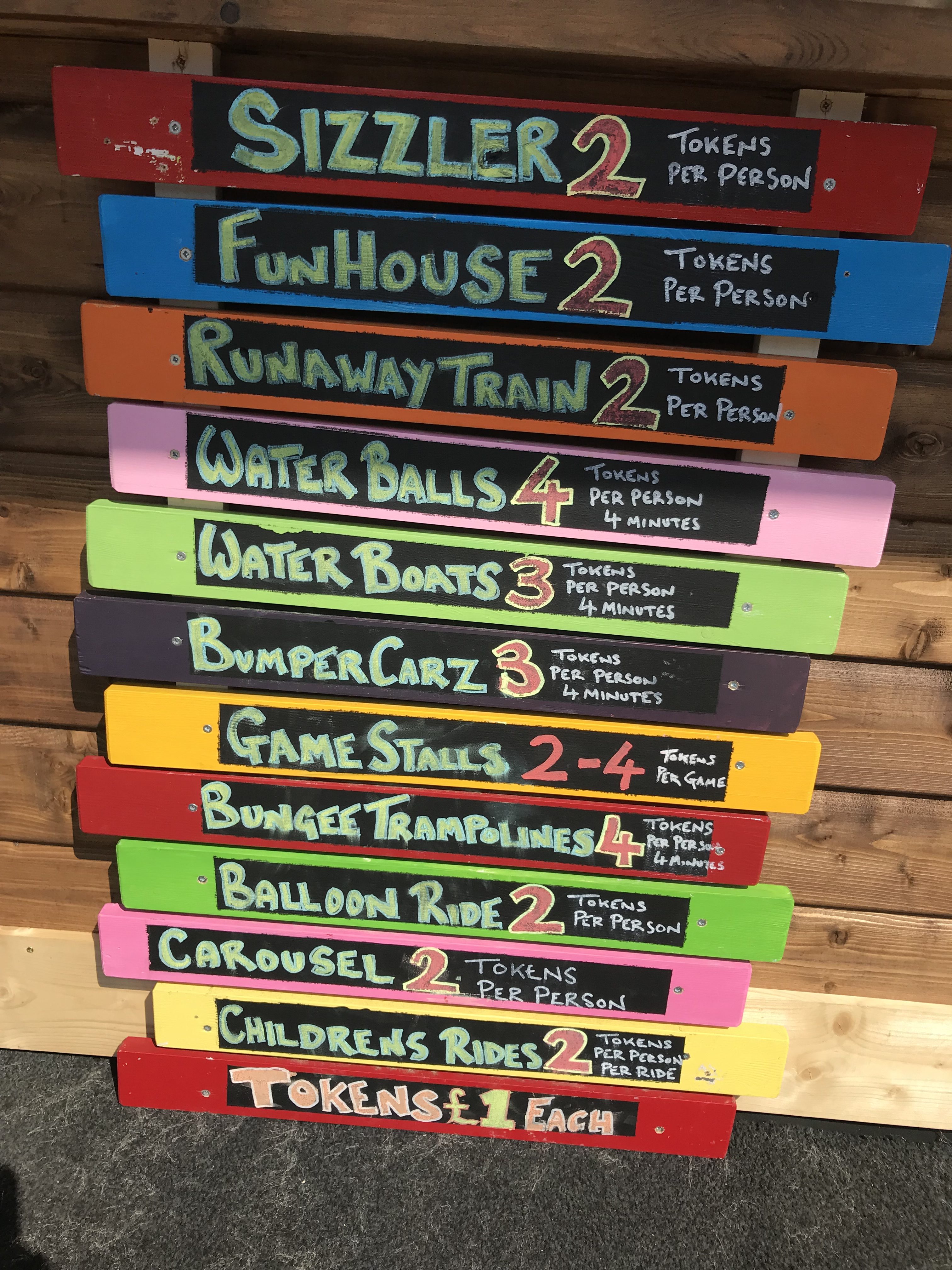 There’s no doubting the cost of the rides can add up. Usually as a family we would set a budget of around £5 or two rides per child, which we find helps them appreciate the value of what we are spending on them as well as encouraging them to think about what they want to do the most.

The food and drink stalls are pretty much the same as last year, mostly serving burgers, fries and the like. My children each received a kids’ meal, which cost £4.50, including a carton of juice. The stalls are not great for dietary requirements and sadly I couldn’t find anything vegan, but luckily the beach is in the heart of the Bay with its various shops and cafes.

There’s a cocktail bar (which we didn’t visit), and a stand selling soft drinks, candy floss and slushies, which were most welcome in the heat! 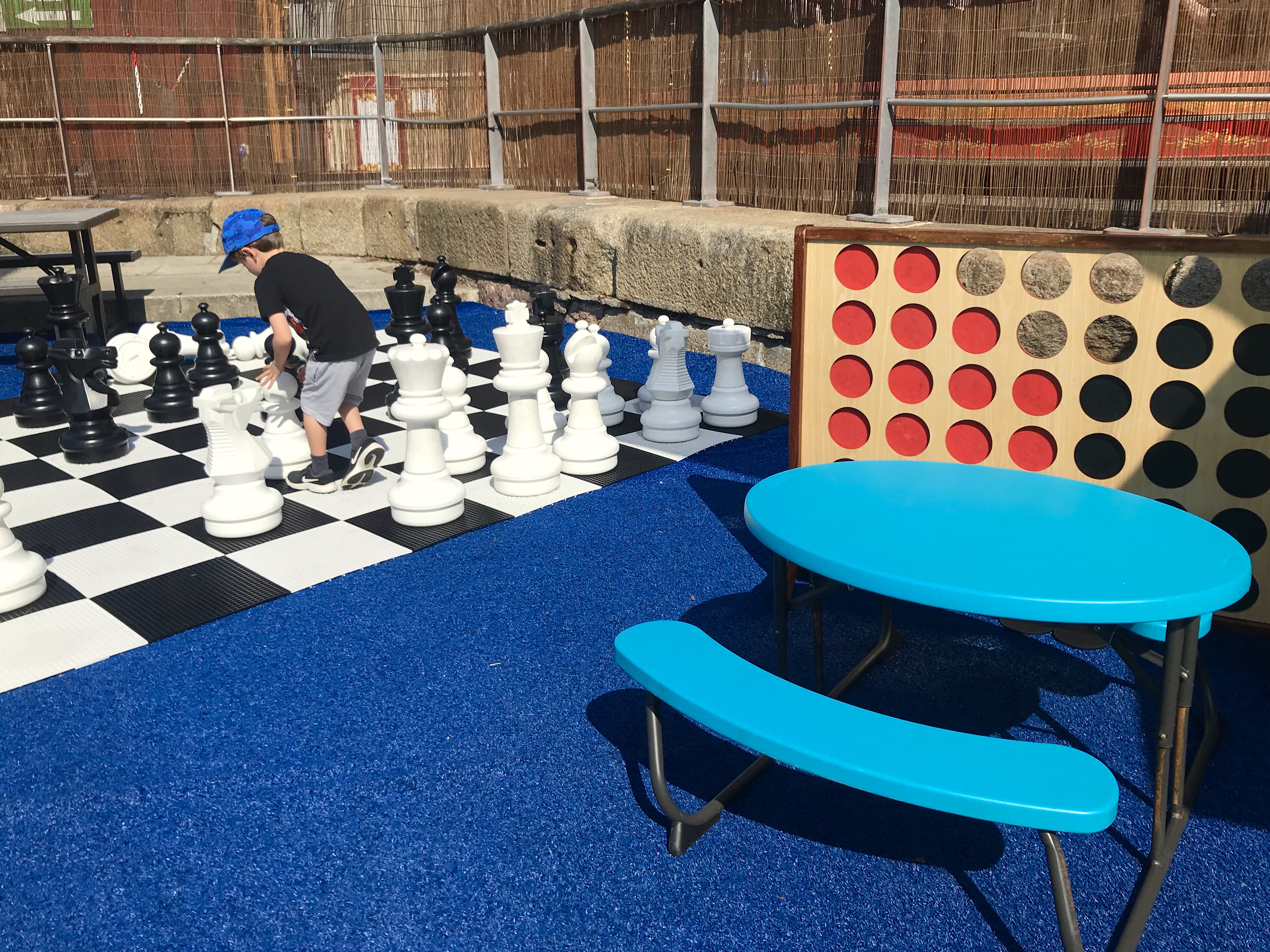 We saved the sand and water play until last. The two are separate, which is a little frustrating when your children want to go from one to the other, but it does means the pool water stays clean and not full of sand, and the sand stays dry and not wet and stuck between toes and fingers. I didn’t take many photos because there were so many children playing. 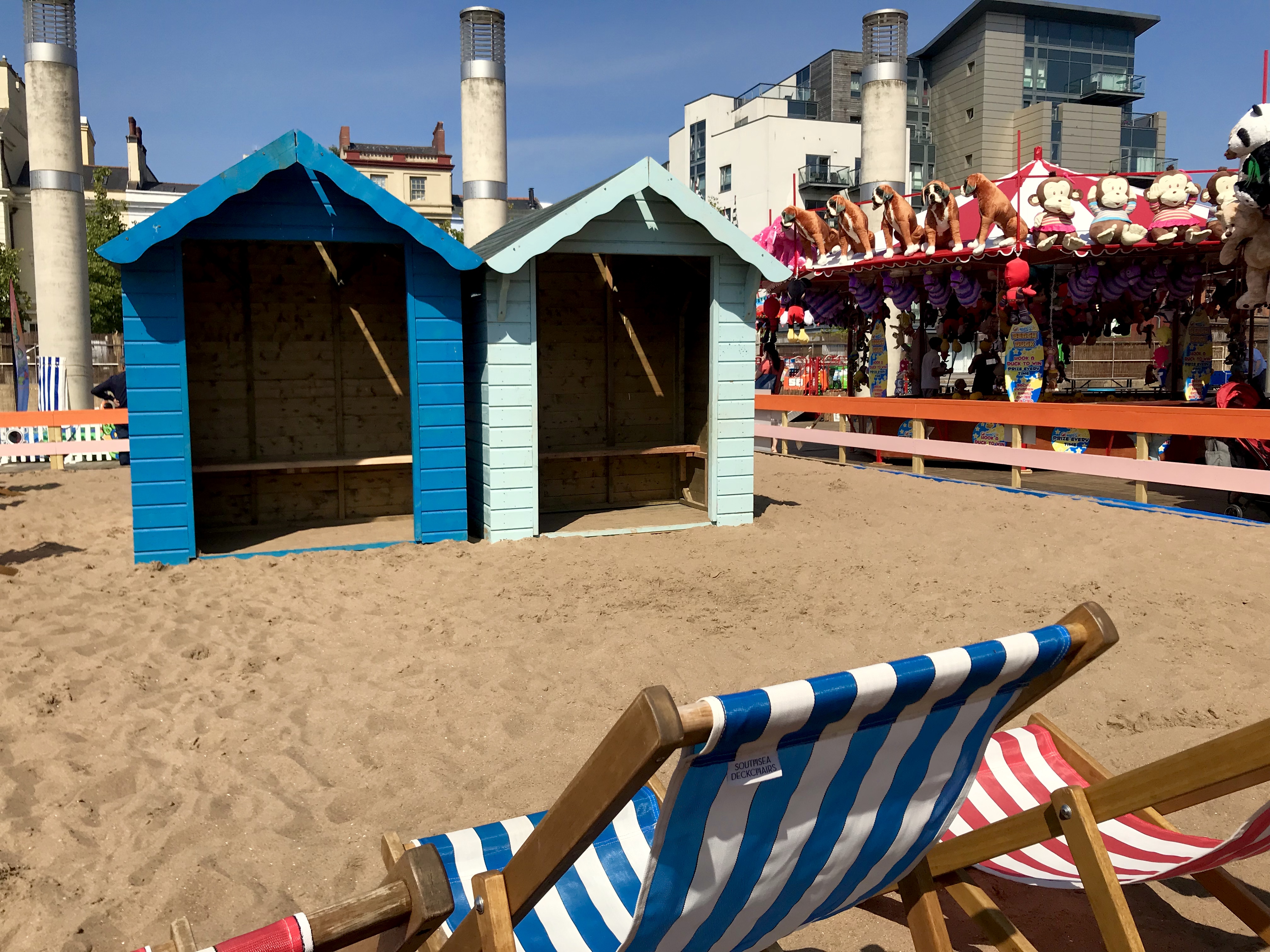 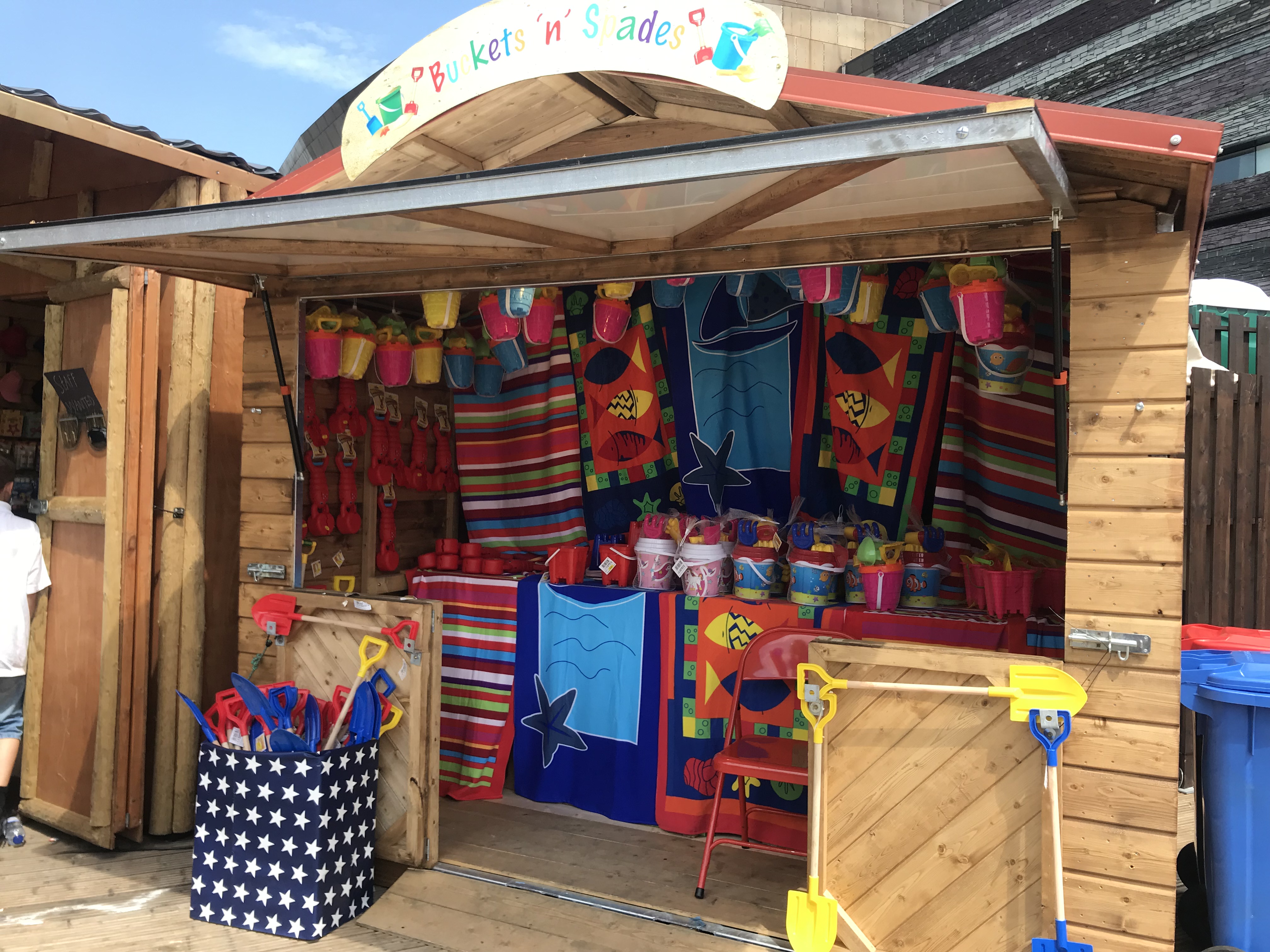 There’s a small area for children to get changed in and out of their swimming costumes and a shop selling beach towels, buckets and spades and the like as well as sunglasses and other souveniers – but children will need a swimming costume for the splash pad. We saw a couple of children in regular clothing being turned away.

Finally, it’s worth mentioning the free entertainment at the beach over the summer, which is all free, such as the musician we saw playing steel drums. Keep an eye on the Beach’s social media channels for updates of what’s going on each day. 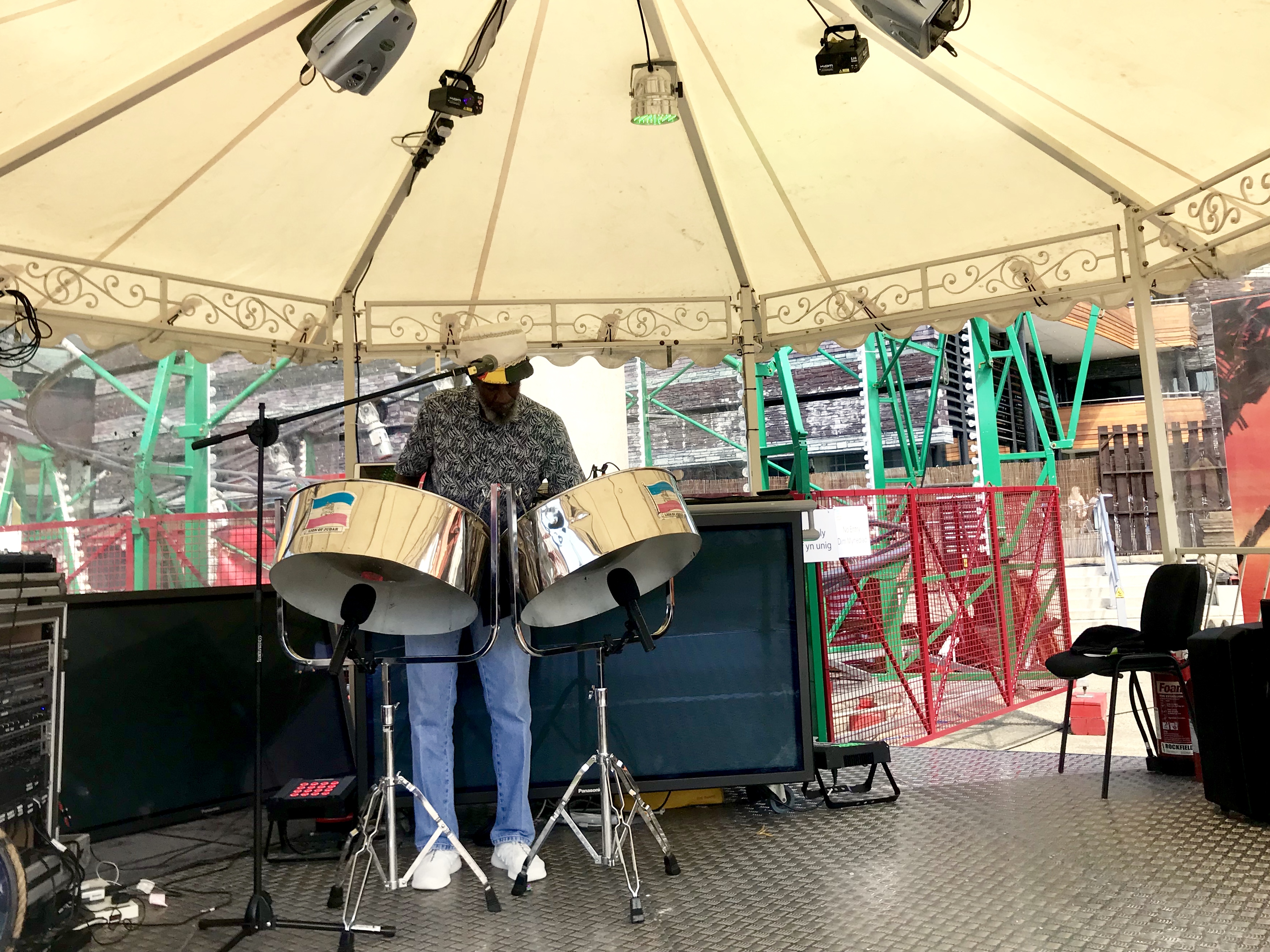 Cardiff Bay Beach, Roald Dahl Plass, runs until Sunday 1 September. It’s open Sunday-Thursdays, 10am-8pm (except for Sunday 1 September, 10am-6pm), and Friday-Saturday 10am-10pm. You can get 10% off parking at Q-Park car park by booking in advance and using the code BEACH19. 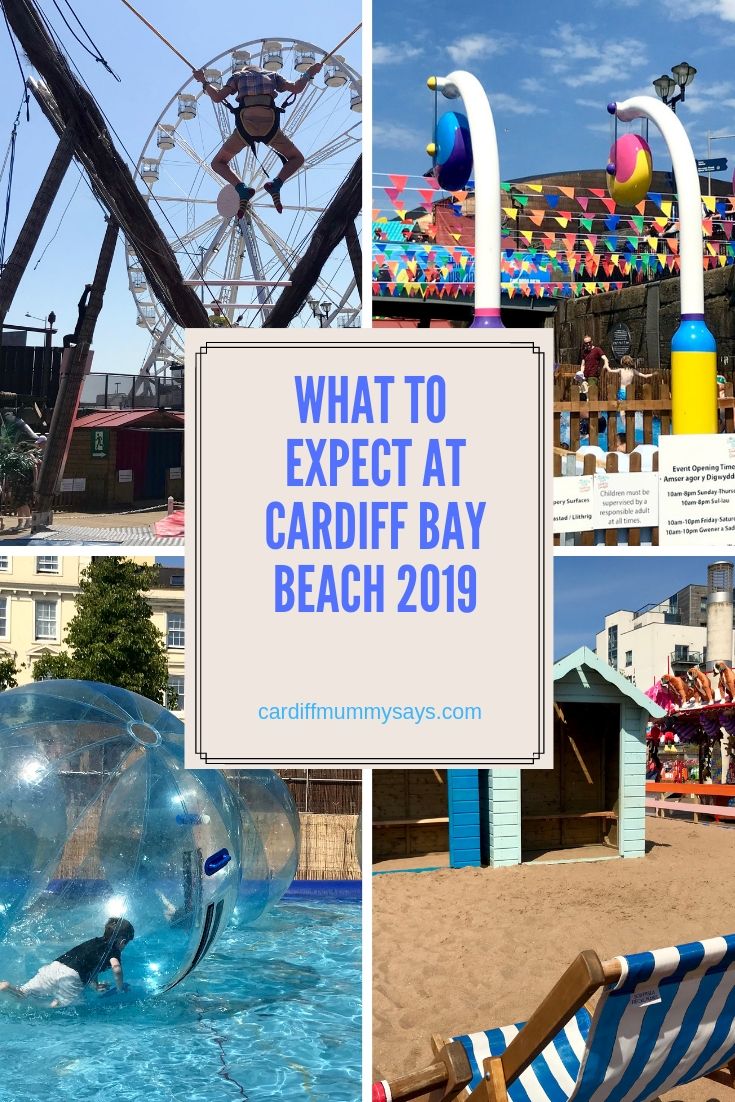 Homepage » Cardiff » What to expect at Cardiff Bay Beach 2019