If you’ve been out and about in Cardiff over the last few weeks you might well have seen this little dinosaur and fox scootering and running around. These tails have visited Heath Park, Roath Park, Cardiff Bay Barrage and Tredegar House among other places. 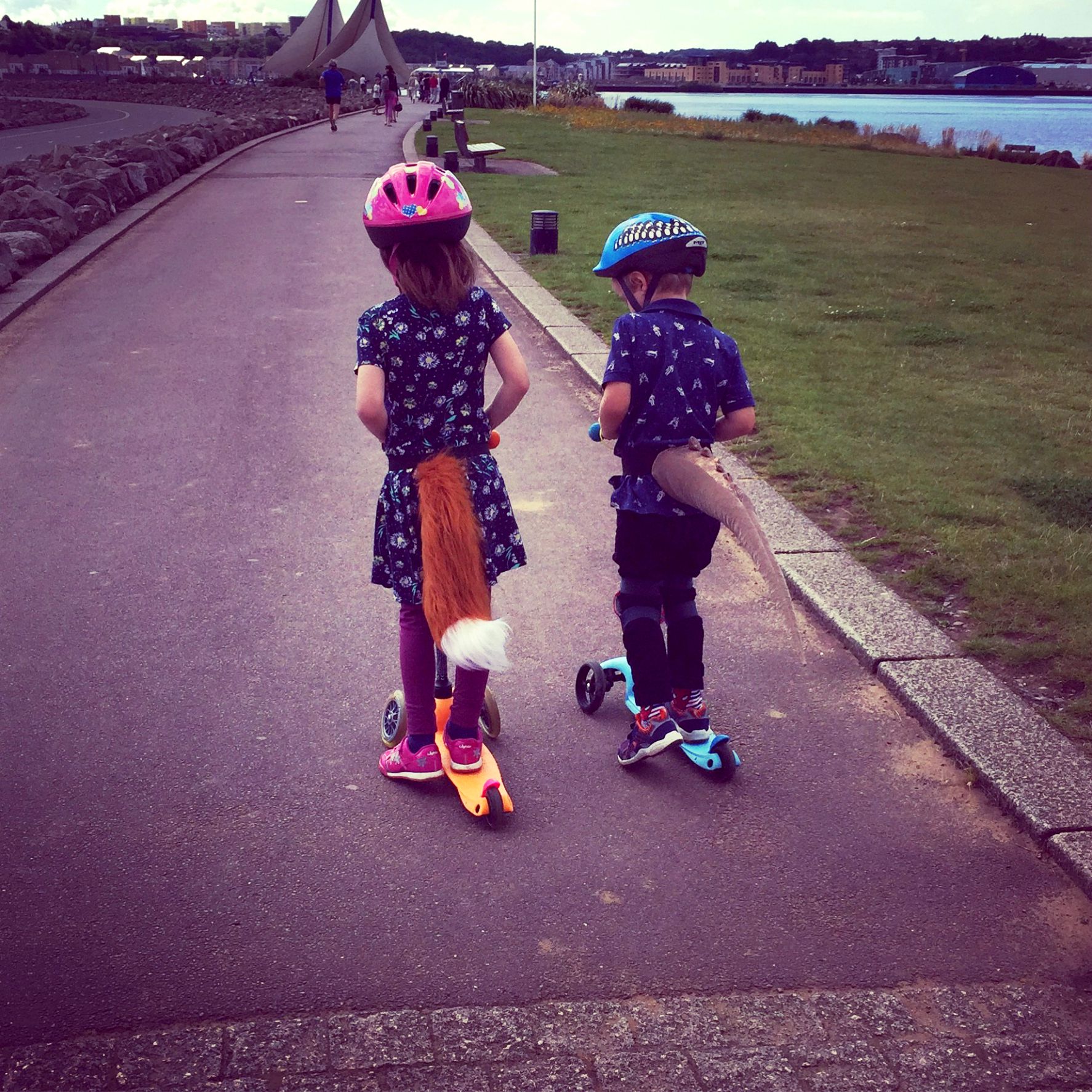 And when we were on holiday in North Devon a few weeks ago, the tails had an amazing time building sandcastles on Woolacombe beach and dens in the woods at Arlington Court. 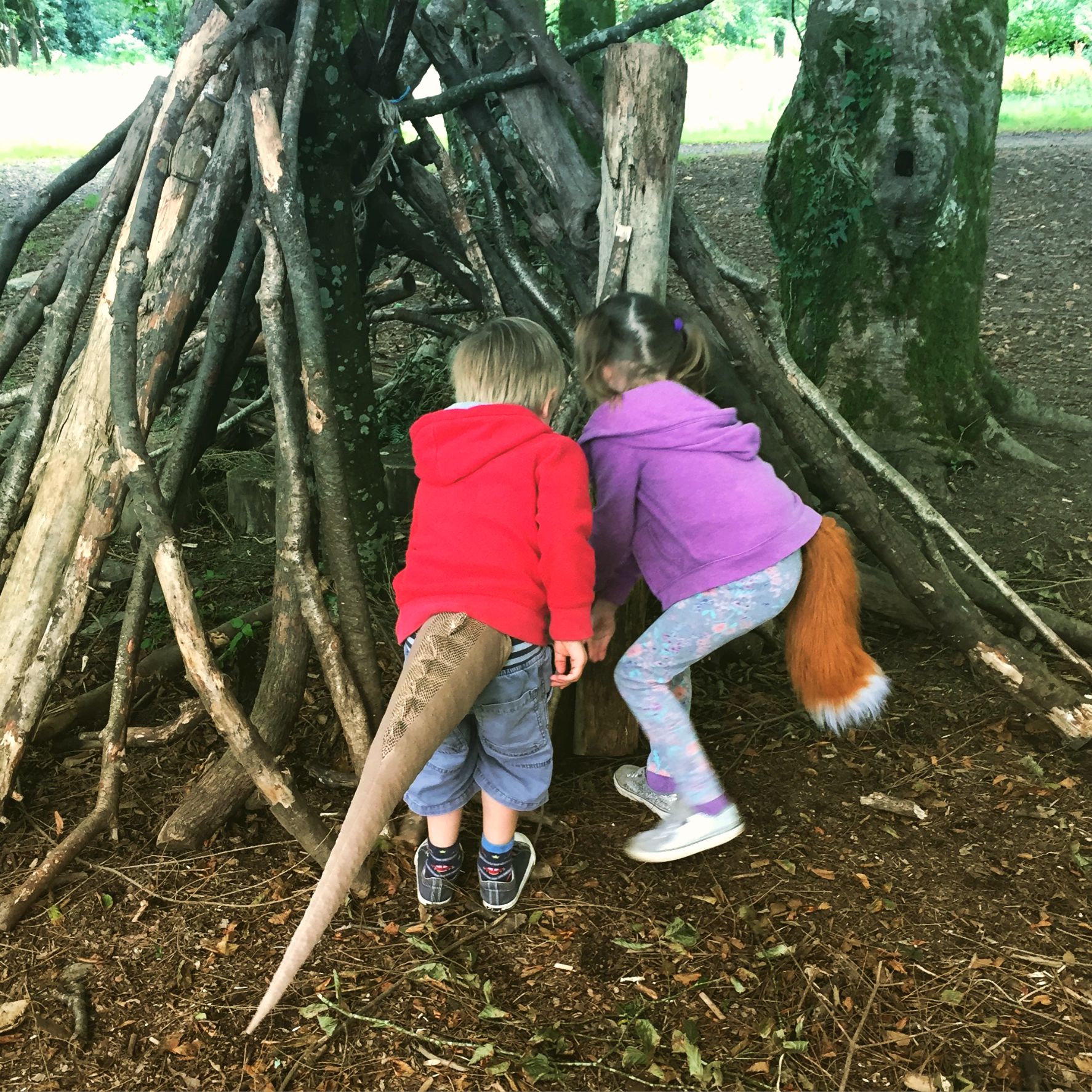 Wherever these tails have been, they’ve certainly got a lot of attention and provoked a lot of comments from children and grown-ups alike. They’ve made people laugh and smile, stop and talk to us, and many a child has asked if they can have one themselves (sorry if it’s caused any pestering, unsuspecting parents!)

Above all, my children love them! Little Miss E, my 5¾-year-old daughter, and Little Man O, my newly-turned four-year-old son, needed no encouragement to wear them – and Baby Boy I, their 18-month-old little brother, loves wearing the tails too. 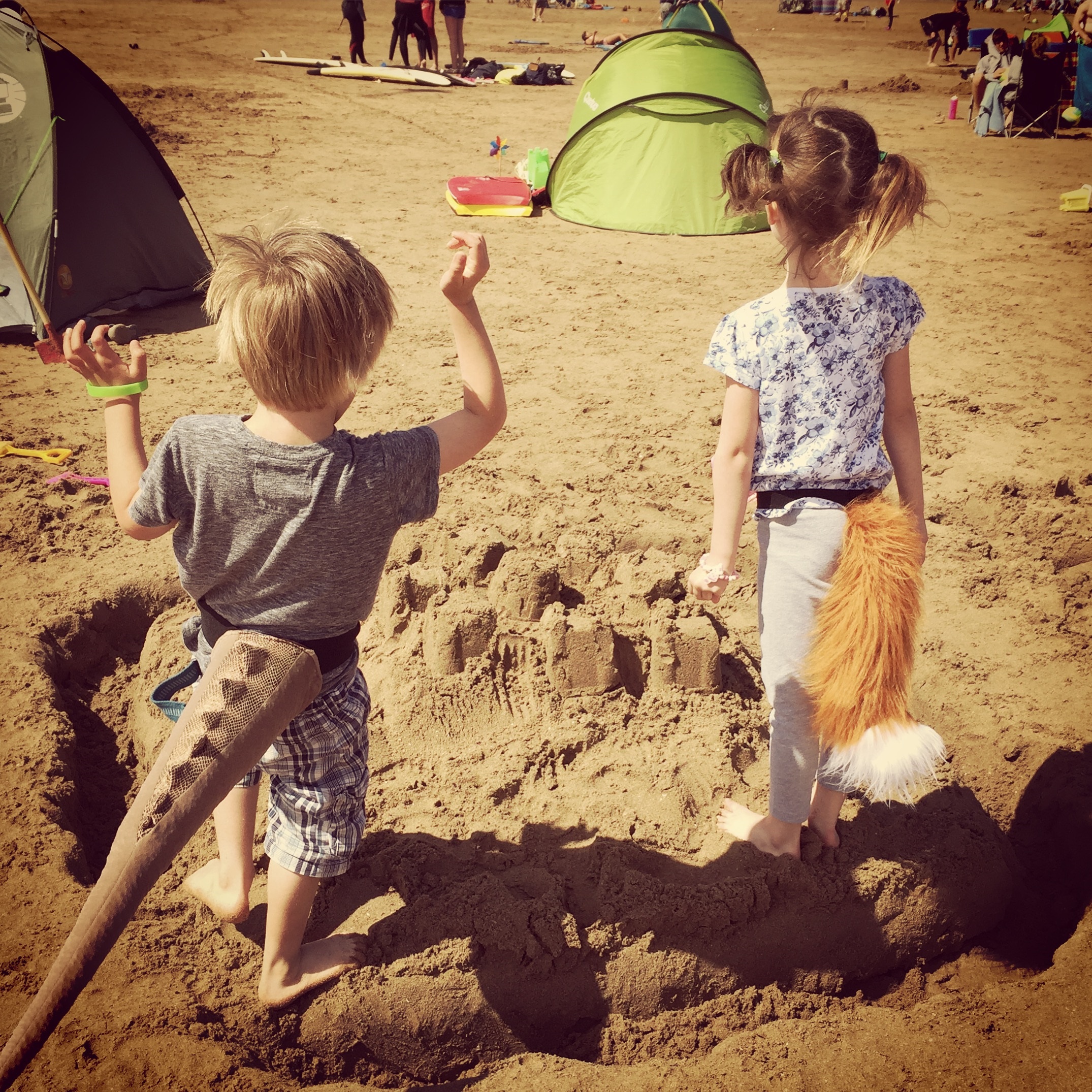 They were gifted to us by the gorgeous Cardiff-based company Wonderlings, which sells high-quality toys, garden games and outdoor activities designed to capture children’s imaginations and to enhance their outdoor experience.

Regular readers of my blog and my Instagram followers will know that we love the great outdoors. We definitely don’t need toys to persuade us to go outside, but it’s great to have an added dimension to our explorations; something to encourage my children (and me) to think a little differently.

One of their new favourite games to play while wearing their tails is making shadow shapes and walking around like dinosaurs. They’re also convinced they go faster on their scooters with their tails on. Baby runs round in circles chasing his tail like an excited puppy. It makes him laugh as much as it does us. 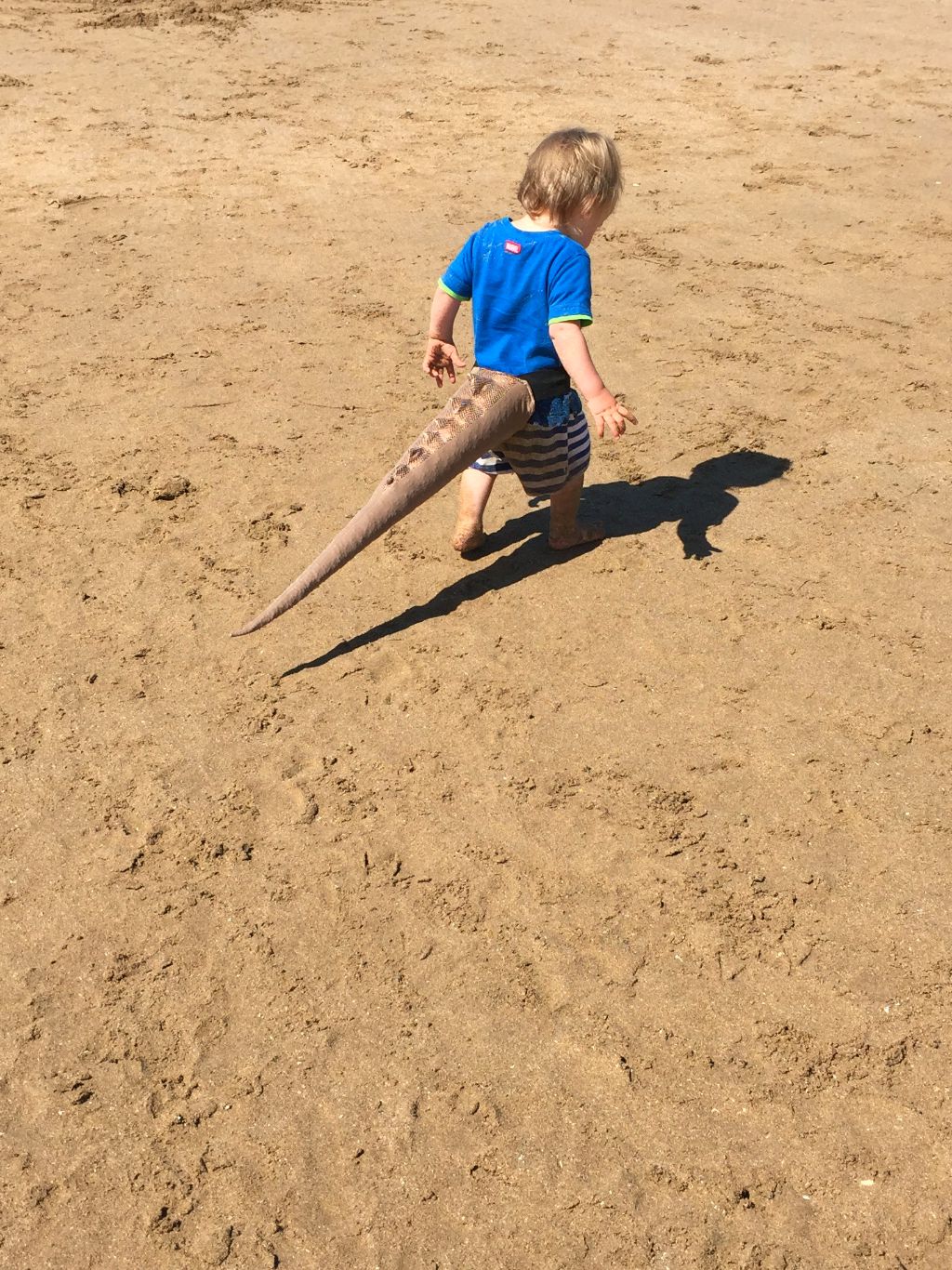 They’re not cheap, at £29.99 for the dinosaur tail (well, it’s listed on the website as a lizard tail, but who am I to argue with my children who insist it’s a dinosaur?) and £21.99 for the fox tail. But in terms of price per wear/play, they’ve proved to be really good value. The quality is great. The dinosaur tail is filled with small polystyrene balls, rather like a bean bag, meaning it swishes and moves around in a very satisfactory way, while the fox tail has been through beaches and woods and not lost any hairs or become matted or scruffy.

We were also sent a set of design your own butterfly wings (although these have since been replaced on the website with the very similar design your own bird wings, priced £19.99). Little Miss E has been diligently colouring in all the different sections with the enclosed fabric pens and attacking them with the glitter pens. She’s still working on it, diligently completing a few sections at a time. I love that it’s become a project for her. You can see the pride in her eyes as the wings fill with colour. As soon as it’s ready, you’ll be the first to know.

We’re also looking forward to trying out the old fashioned crabbing kit, £29.75. We just haven’t been anywhere to use it yet unfortunately.

Wonderlings, previously known as Wild and Wonderful, was founded by two Cardiff-based mums, Anna and Becky. Friends since their teenage years, both grew up in rural West Wales and spent their childhoods climbing trees, going on muddy walks, jumping waves and catching frogs. 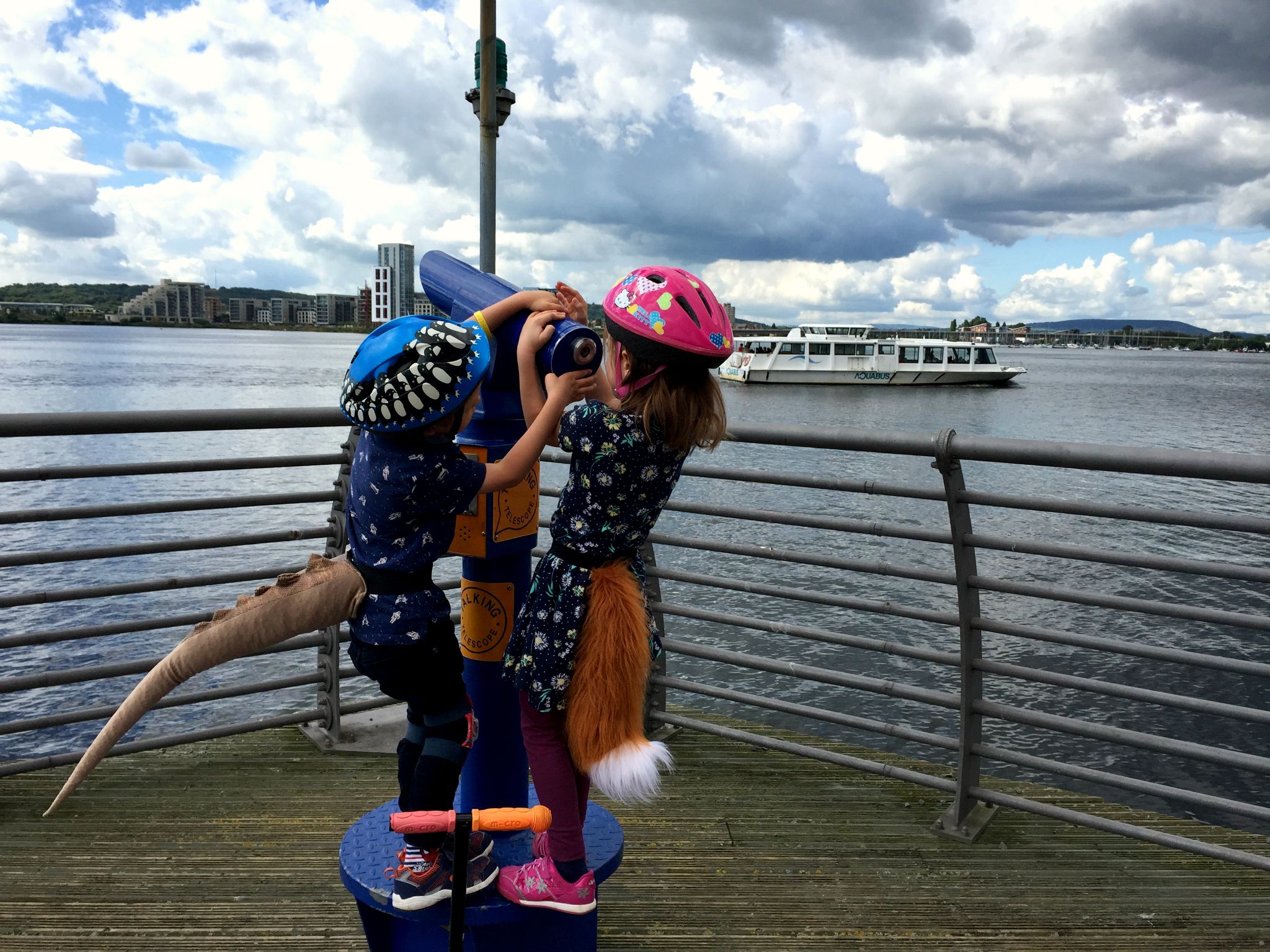 With five children between them, they wanted to create the same opportunities for their own little ones… and so their business came about, sourcing and selling traditional outdoor toys and games. As the two say on their beautiful photo-filled website, “Outdoor play isn’t just fun; it has health benefits; it inspires the imagination; it builds friendships; it establishes a connection with nature. And our children are never happier than when they’re running free, breathing fresh air and getting dirty together.”

If you’re looking for something a little different for Christmas or birthday presents for the little ones in your life, then the website is filled with gorgeous ideas. And, until the end of September 2015, Cardiff Mummy Says readers can get an amazing 25% off the imaginative play range. Just enter the code CDFMUM when you order.

Don’t forget to join me on the Cardiff Mummy Says Facebook page , or tweet me on @cardiffmummy